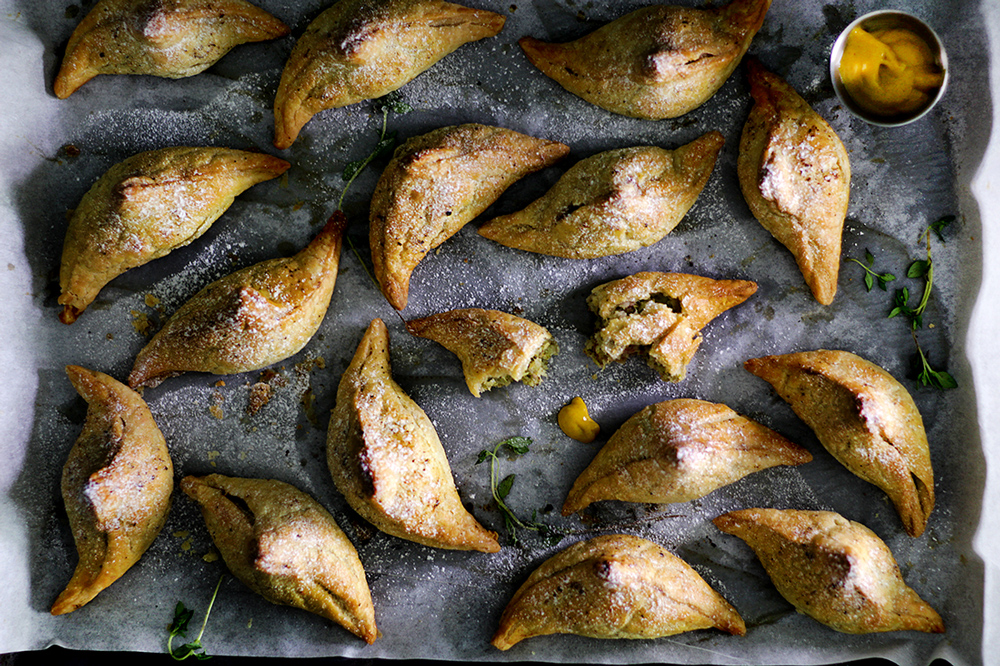 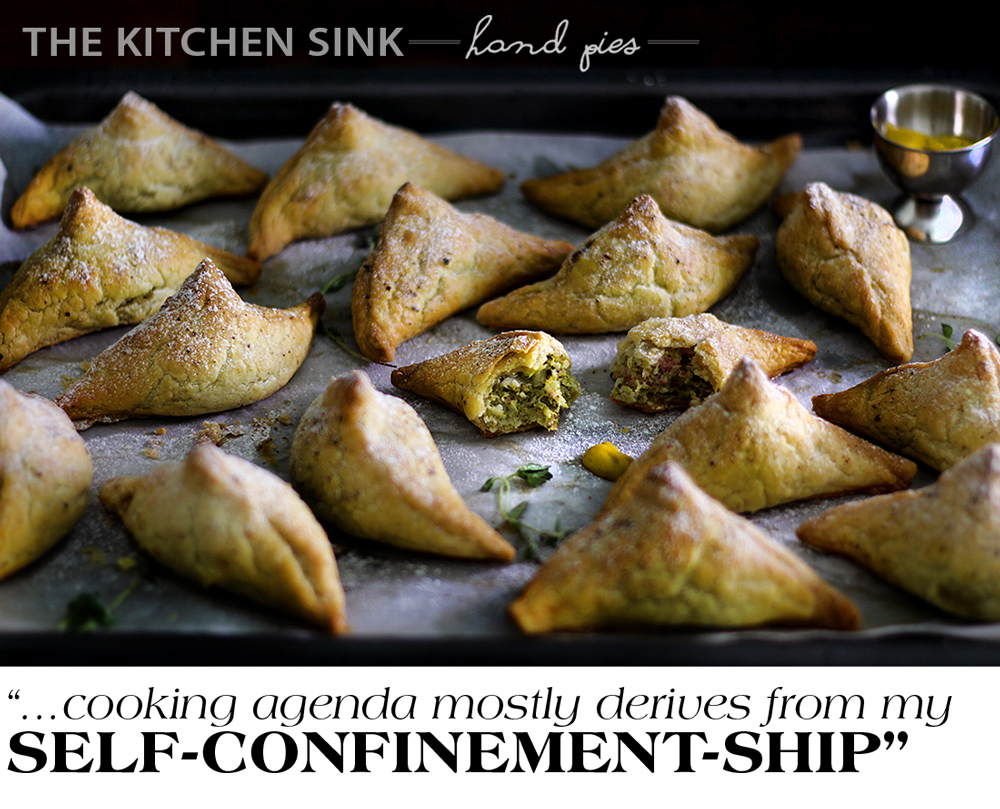 Sometimes I get a little personal when I take a stroll through the expansive, razzle-dazzling and star-crusted cosmic jungle that is food-blogosphere.  I really don’t mean to compare I really don’t.  Wise man once said that… “Go… just do your own things” or something… you know but put in a MUCH more profound and scholarly terms.  But the thing is (and it’s a big thing) that I can’t help but feeling like Gimli the dwarf when self-put besides the others, whom I’d like to call the blogger-elves of the Woodland Realm (birds chirping pls) because I mean really, just REALLY, do people SERIOUSLY live like that?  Prancing with in-season-only, tree-ripen fruits and vegetables galore by the farm-stands and POOF! an effortless display of fairy-salad and angel-tarts on a oh-my-granny-just-left-me-this antique table.  Or picking WILD FLOWERS in pastel tea-dresses surrounded by rainbow and songs and THAT’S what she EATS on weekends!?  For REALZ?  I bet their body parts self-shave, too… 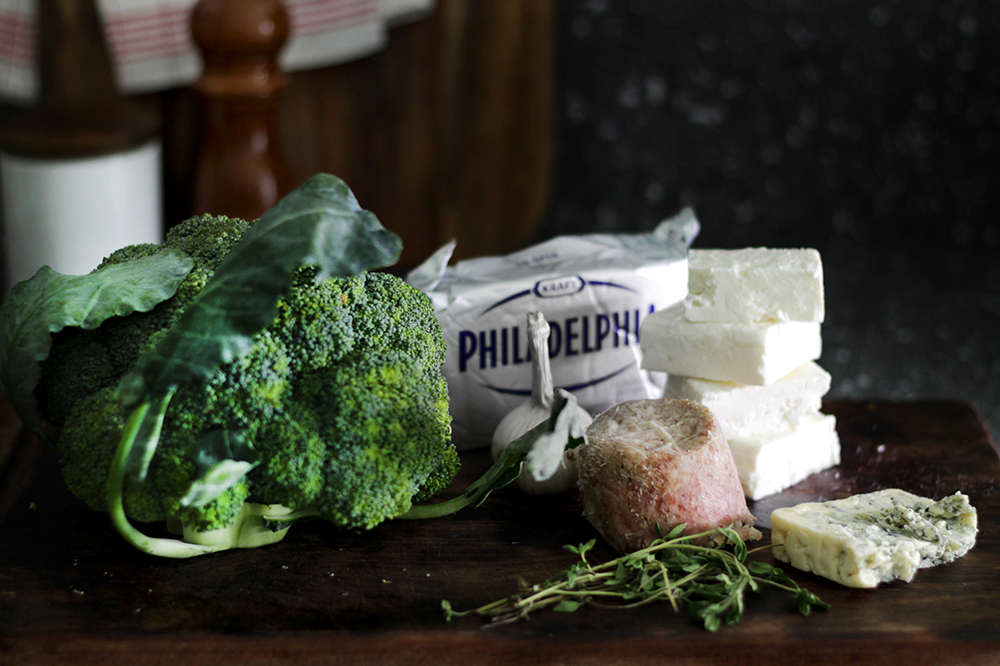 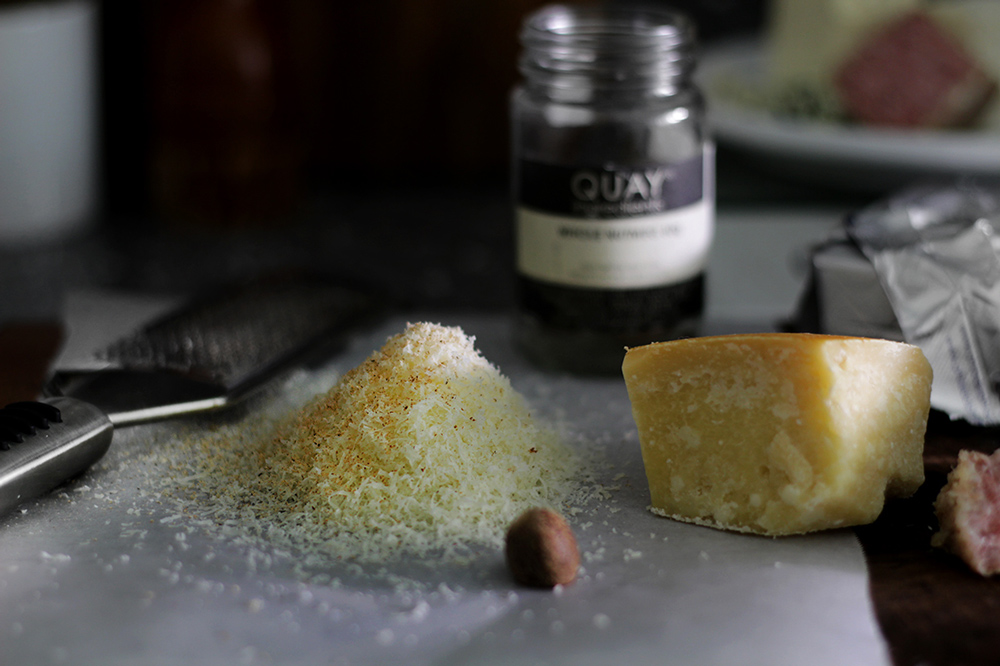 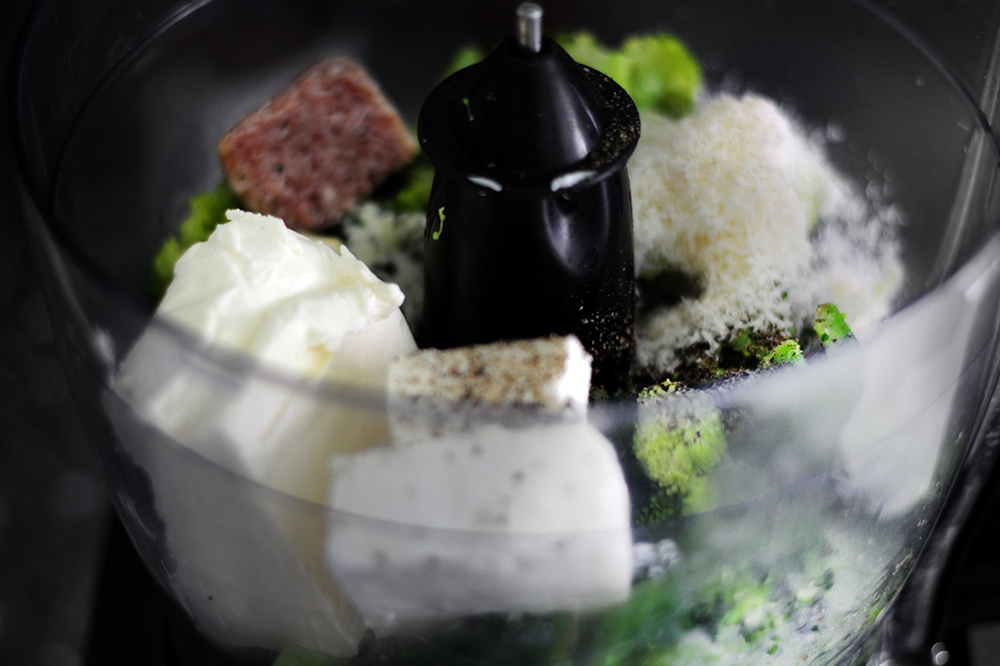 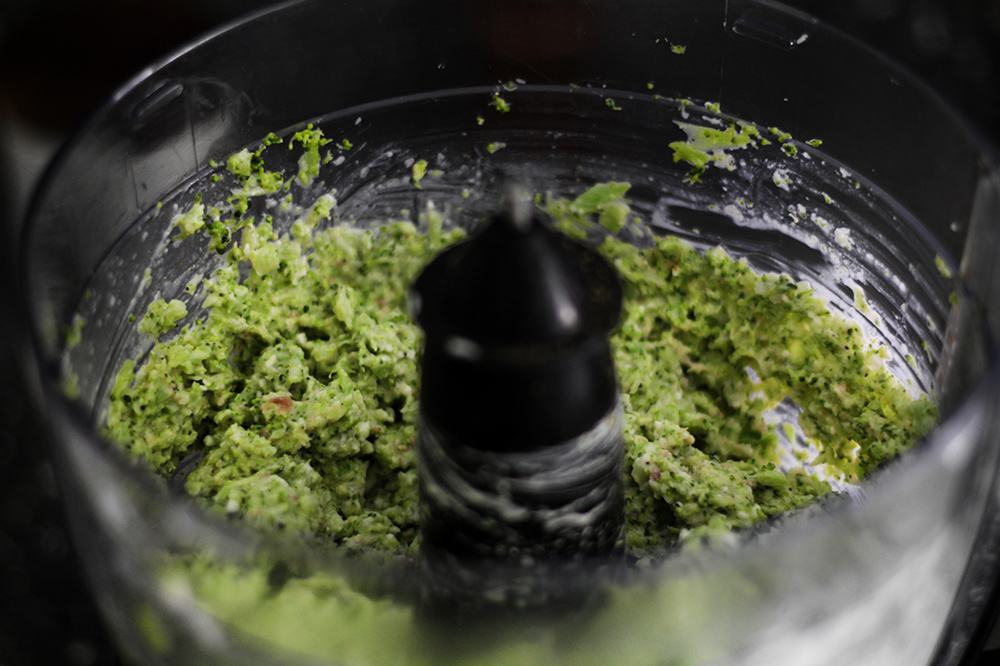 This is how it goes down in my world.  I have a LOOOONG list of things I would like to make/test in my kitchen, bookmarked, stickered, corner-folded or even written on a napkin, you name it.  Long.  And it’s more likely that the list will just grow exponentially without resolution because in reality, my cooking agenda mostly derives from my… self-confinement-ship.  That’s a medical term referring to one’s hesitation to leave the perimeter of comfort, an acute feeling of dependence on the familiar surroundings.  In street-talk:  I am severely lazy.  Even if I WAS in elf-form I’d be banished because the call to nature would be unanswered.  I am JEDI-LIKE in talking myself out of leaving the apartment.  Like:  I need eggs but oh it’s only two o’clock what’s the hurry, let me finish my coffee (yeah… 2 pm is “morning”).  Then it’s four and OH I feel like a NO. 2 coming!  These windows don’t open regularly I gotta SIEZE every opportunity if you girls know what I mean…  Then at five I’d very much rather finish the last few minutes of my Barefoot Contessa and who wouldn’t, she’s adorable then go on to pluck eyebrows.  And omfg look how the time flies all-mighty it’s already six!  Pleeeaase… elf-form or not, who has motivations to leave the house after six, eh? 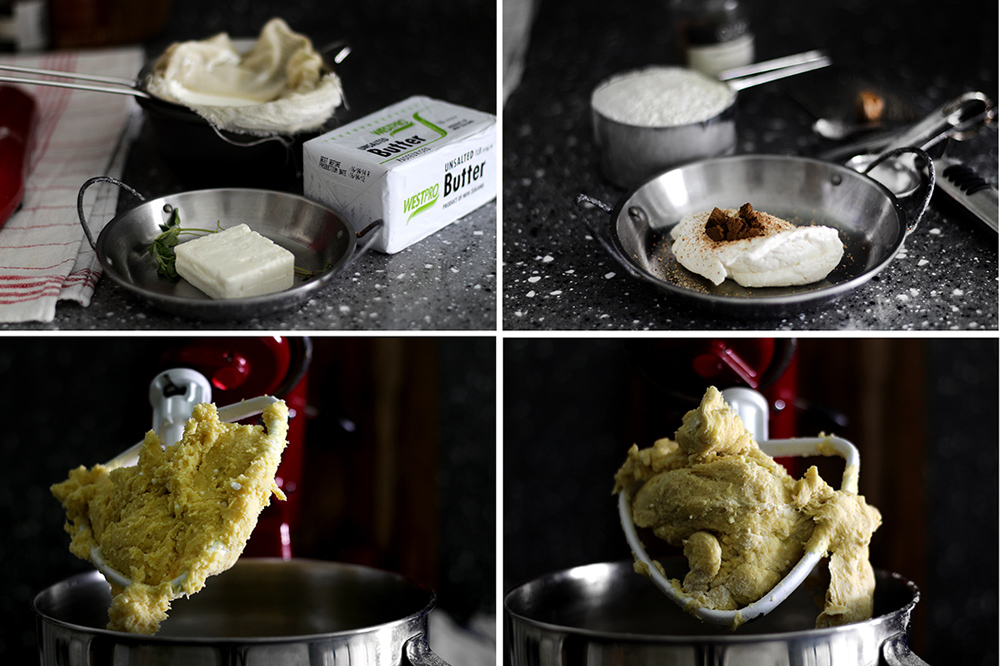 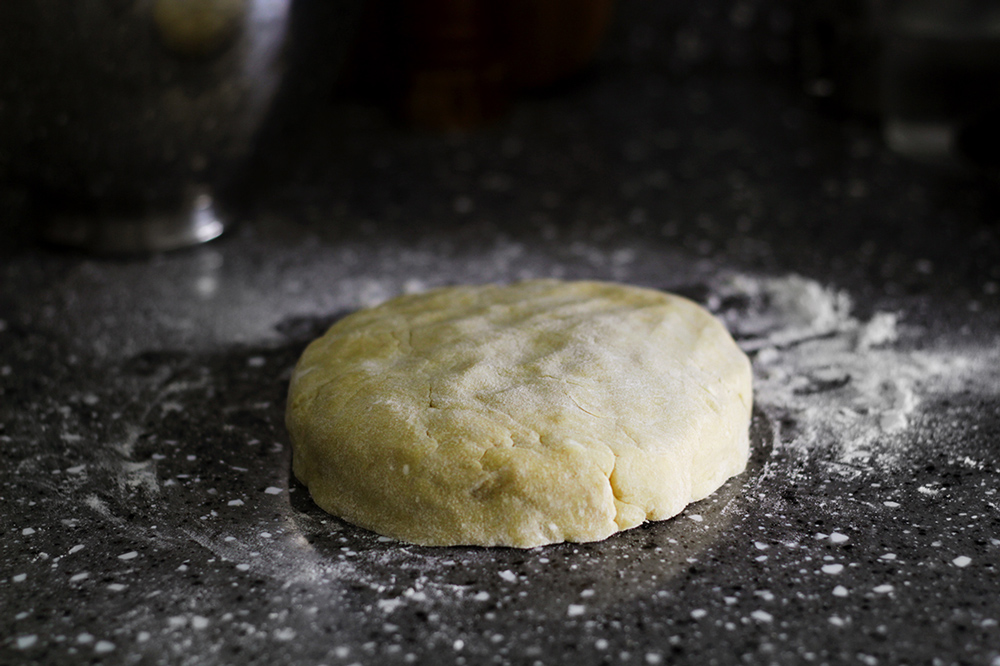 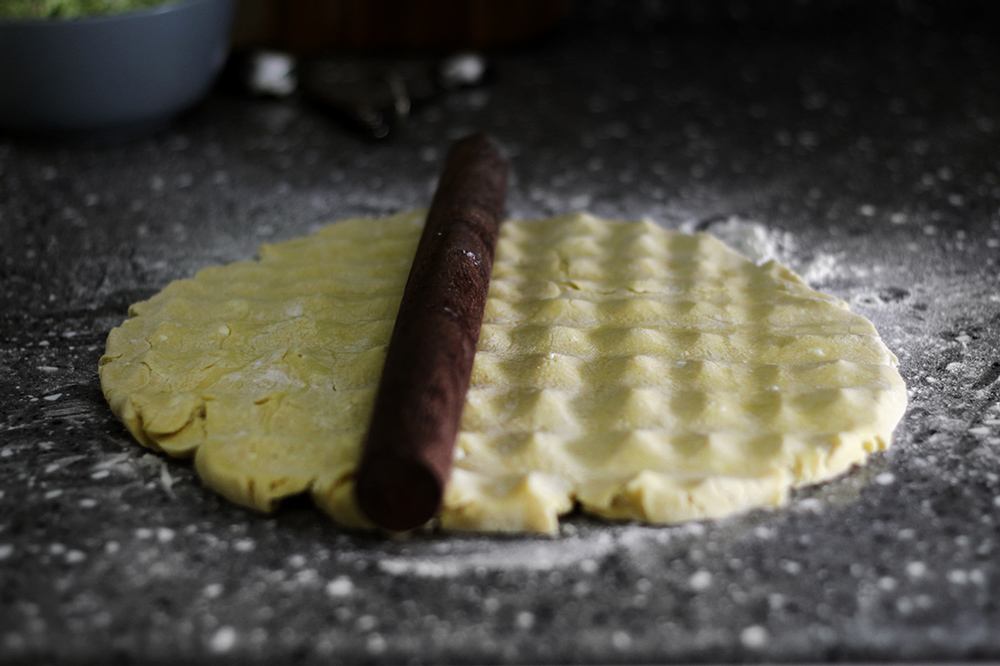 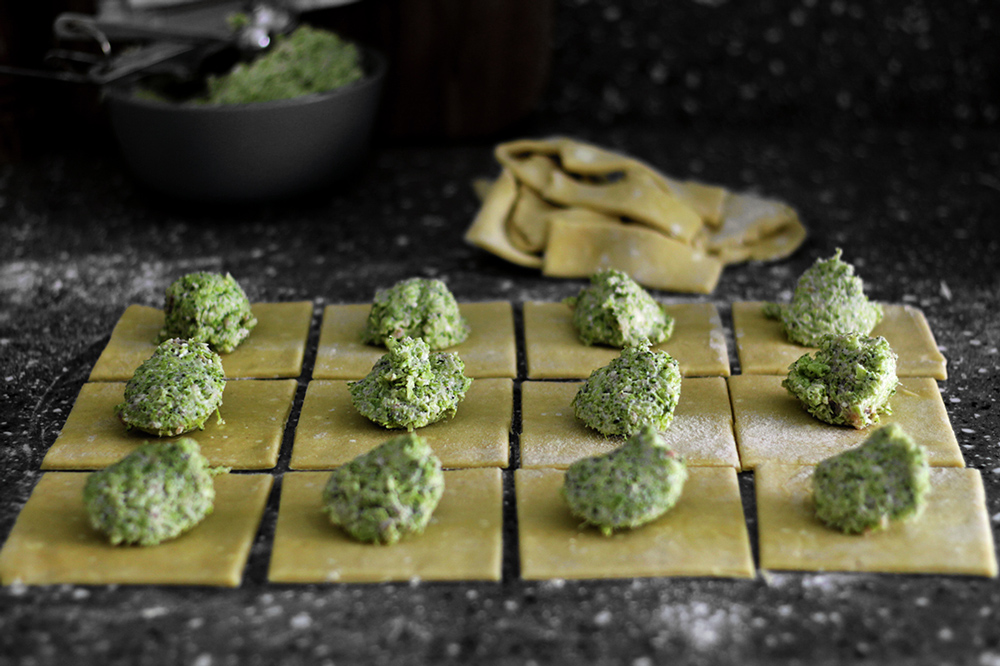 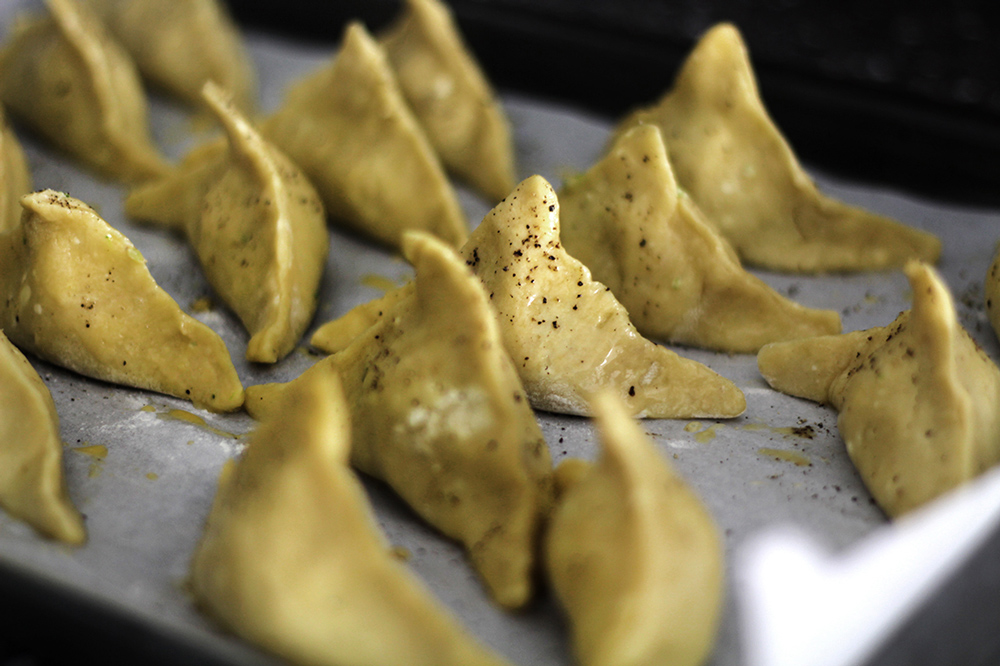 Therefore naturally, my kitchen doesn’t look like the Martha Stewart Living June-issue exploded in reality.  It mostly looks like… a lotta bits and pieces of things that I’d like to believe last forever in the fridge (they don’t?).  At any given moment in my “skinny box”, it’s likely that I have:

And instead of flower-petals-bowl-of-greens, or hand-picked-cherries-tower-of-tarts, I am making what I call – the kitchen sink hand pies.  I’d put it in elf-terms but I don’t speak Elvish.  It’s essentially different types of cheeses mixed with whatever vegetables and cured meats, filled into an exceedingly buttery cheese-flavored pie crust and eaten like a day-sustaining snack.  I wish I could feel ashamed but I don’t actually. 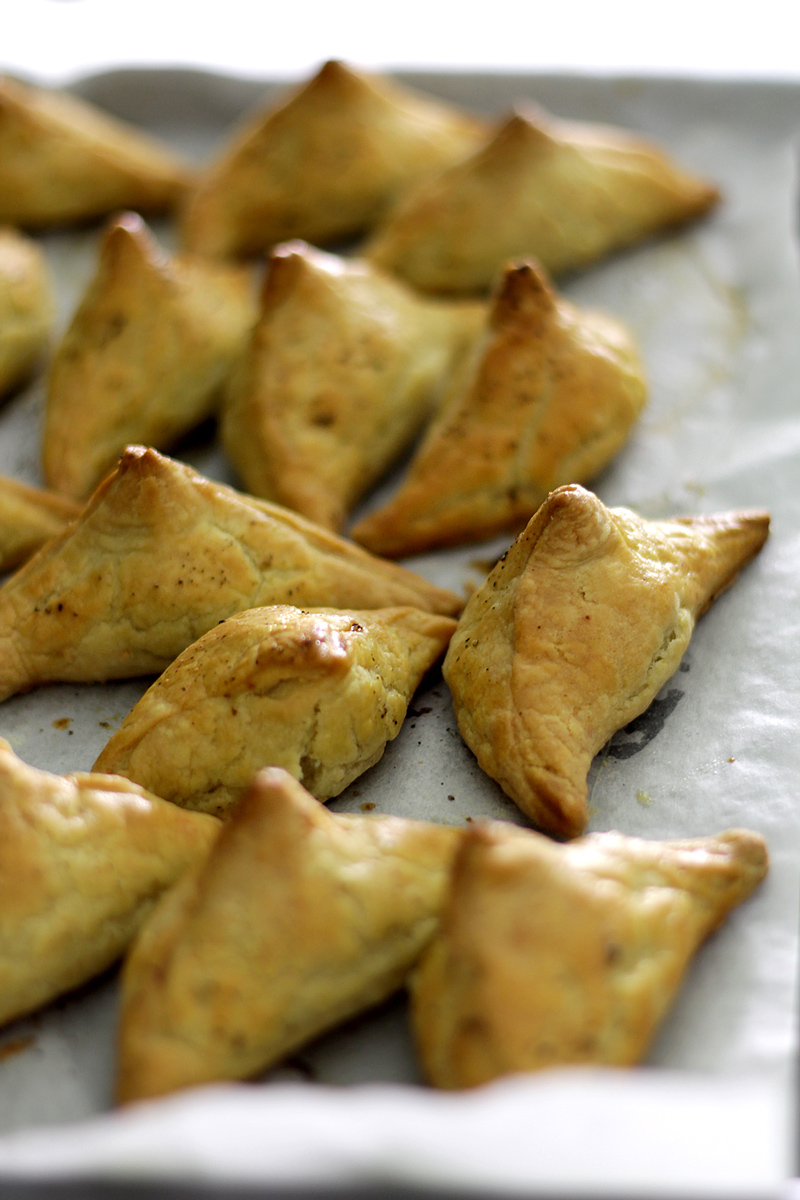 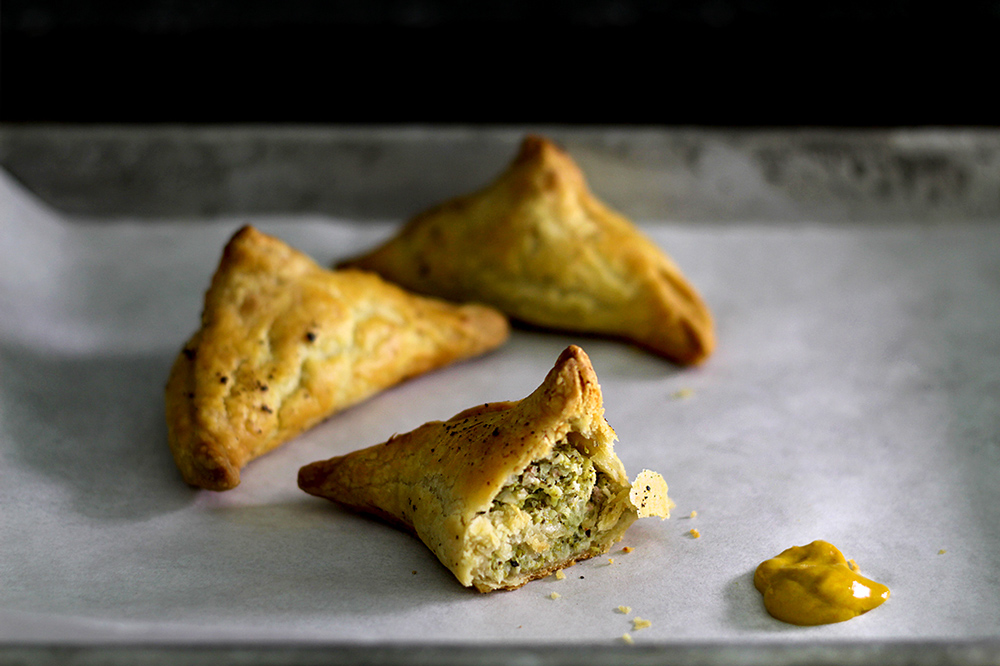 And that day when they came golden-browned and pungent out of the oven, as I was standing by the counter snacking on them with yellow mustard (another “forever” item) in all its savoury splendor, I don’t know WHAT came over me.  My body took over my consciousness and turned to the cupboard for some powdered sugar, and DUSTED ALL OVER THEM SENSELESSLY.

It was barbaric, reckless… NON-ELF!

But a mistake it was NOT.  The sugar worked!!  More than worked, it took them home, binded them together in spells and ruled them all.  Who wants to eat flowers if they can eat a sugar-coated kitchen sink pie?  I dunno.  Ask the elves. 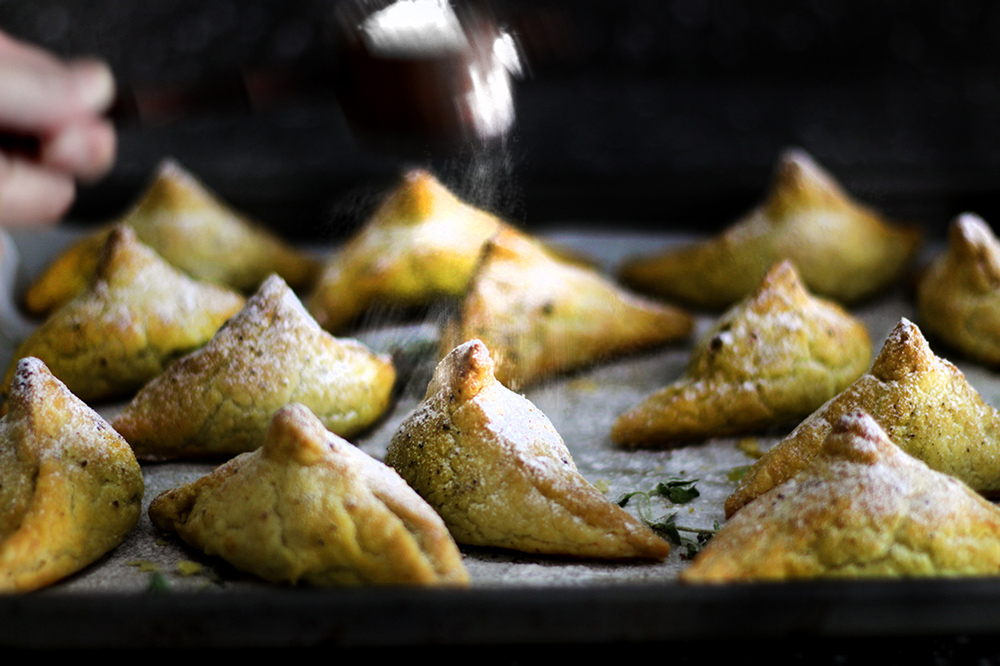 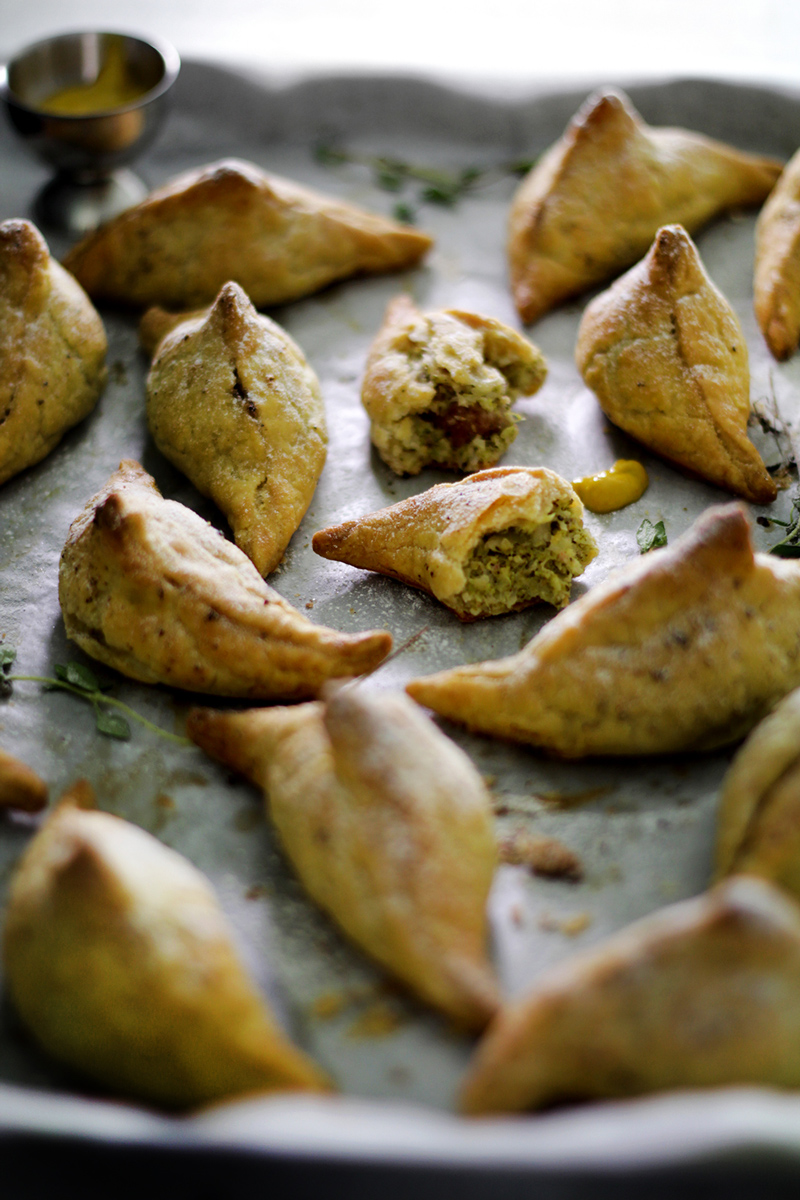 Well by definition, this recipe is highly adaptable.  Probably the only recipe so far that I won’t obsess and control-freak over.  I would much prefer if I had some melty cheeses like gouda, gruyere or brie instead of feta, maybe prosciutto, ham or chorizo instead of bologna, and more herby/leafy greens like spinach and etc instead of broccoli, but hey.  The kitchen sink wasn’t perfect but it was my kitchen sink.  By all means if you got peas, beans or even zucchini and other squash-like vegetable, or even corns… the kitchen sink must go.

The filling I made had 1 whole broccoli which was way too much because I ended up with a lot of leftover fillings (which I tossed with spaghetti and more parmigiano cheese… don’t feel bad for me), so I halved the filling-recipe for you.  If you want to use up 1 whole broccoli (why, because that’s how they come in the supermarket…), you can double the filling-recipe and you’ll have leftover for tossing with pasta, dipping with chips or just… happy spoonfuls.

Make the filling:  Trim the broccoli off of tough stems and skins, cut them into small pieces and set in a pot with 1/2 cup of water.  Put the lid on and bring to a boil.  Let the broccoli steam until tender but still green and slightly crunchy, just a couple of minutes.  Drain the broccoli VERY WELL, and add it into a food-processor bowl with bologna, cream cheese, feta cheese, blue cheese, garlic, parmigiano cheese, nutmeg and black pepper.  Pulse until the mixture is evenly and finely minced together.  Taste the mixture and add more salt to taste accordingly.  Chill the mixture in the fridge for at least 1 hour.

Make the pie dough:  In a stand-mixer bowl with a pedal-attachment (or I suppose you can do it in food-processor as well), add 1 cup of flour, unsalted butter and crumbled feta cheese.  Start mixing on low-speed until the mixture is completely incorporated, meaning no small chunks of butter left (the feta may not be completely broken down but it’s fine, just make sure the butter and flour is evenly mixed together).  While it’s mixing, on the side, mix the rest of the flour (1 cup) with salt, sugar, allspice and grated nutmeg.  Then add the flour/spice mixture into the mixer with Greek yogurt.  Mix on low-speed and depending on the dough, add 1 ~ 2 tbsp of iced water, JUST ENOUGH to bring the mixture together into a stiff dough.  I used about 1 1/2 tbsp.

Move the dough onto a lightly floured surface.  Knead just a couple of times (don’t over-work it!) to bring it into one mass, then pat into a thick round disk (the flatter it is the easier to roll out later).  Wrap with plastic wrap and leave in the freezer for at least 30 min to flash-freeze if you are in a hurry, or in the fridge until needed.  Both the filling and pie dough can be made the day before.

Unwrap the dough onto a lightly floured surface.  To flatten it, I use my rolling pin to “press” it down in a “grid-order” to get it to a thickness that’s easier to roll out.  Once flat, roll out the dough into a rectangular sheet about 1/8″ (4mm) thick.  Make sure the bottom is well floured during this step to avoid sticking.  With a knife, generously trim off whatever uneven edges and cut the sheet into 3 1/2″ (9 cm) squares.  Don’t worry, you can gather the scrap and roll it out again later.  Add 1 tbsp of filling in the center of each squares, then brush the sides with egg wash.

To close the pie, it’s easier to spread/shape the filling into an “oval shape” that stretches parallel to the direction you are folding it.  Bring two diagonal-corners together and pinch the dough together into a triangle pie.  Repeat with the rest.  Gather the scrap-doughs together and repeat the steps to get however many pies you can out of it.  Set the pies on a lightly floured plate and chill in the fridge for 1 hour, or in the freezer for 30 min.

Before baking, brush the pie-surface with egg wash, then sprinkle with freshly ground black pepper and some sea salt.  Bake in the oven for 30 ~ 35 min until golden browned on all sides.

Dust them generously with powder sugar and serve warm with yellow mustard. 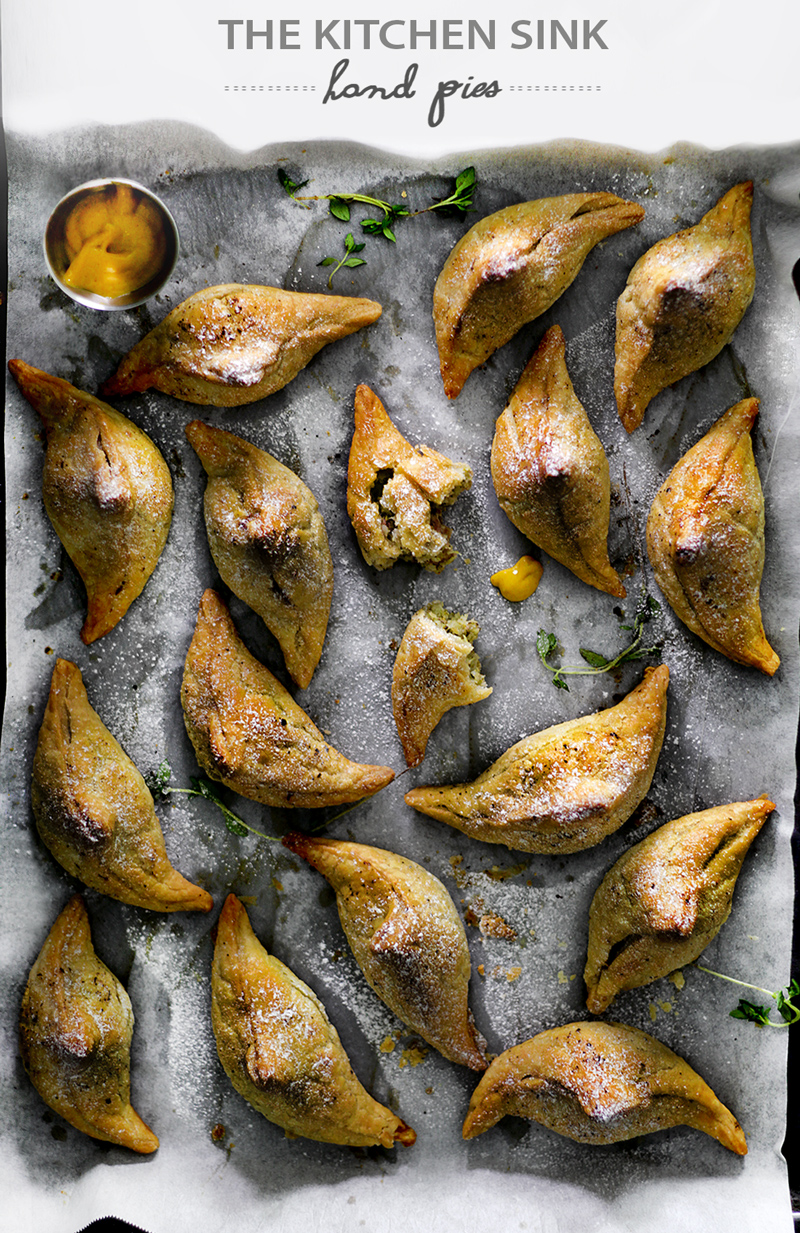