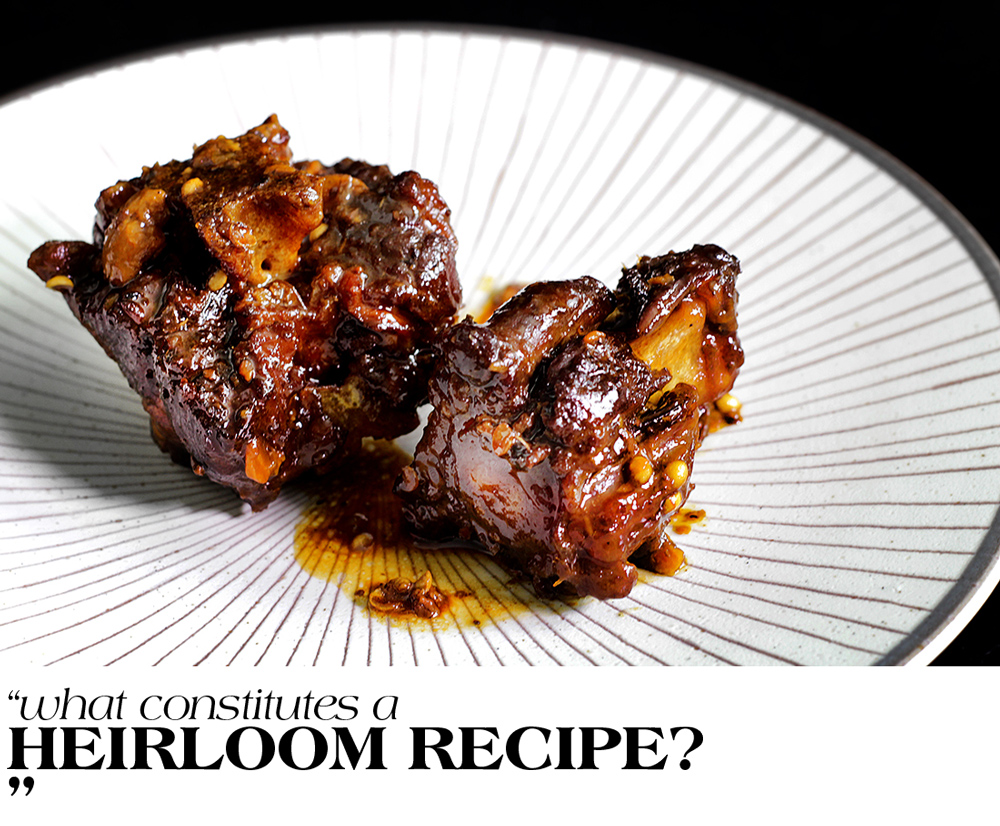 I was totally honoured… thrilled actually, when one of my favorite food-site Food52 invited me to share an heirloom (family) recipe for their column.  Oh why, me?!  Get out of here!  No doubt a little much-needed mint-drop in between all the craps that are leaving a bad taste in my mouth lately.  I mean recognition in any shape or form is super awesome but frankly, I can’t help but feeling a bit… like cheating, like the time when I innocently stole an unaware blanket from Cosco (dude, I swear to God it was an aaaaaccident!).  Well just between the two of us, maybe… because I suspect that Food52 probably has no idea… that I actually… Don’t have one.  Uhem, I trust that you can keep a secret. 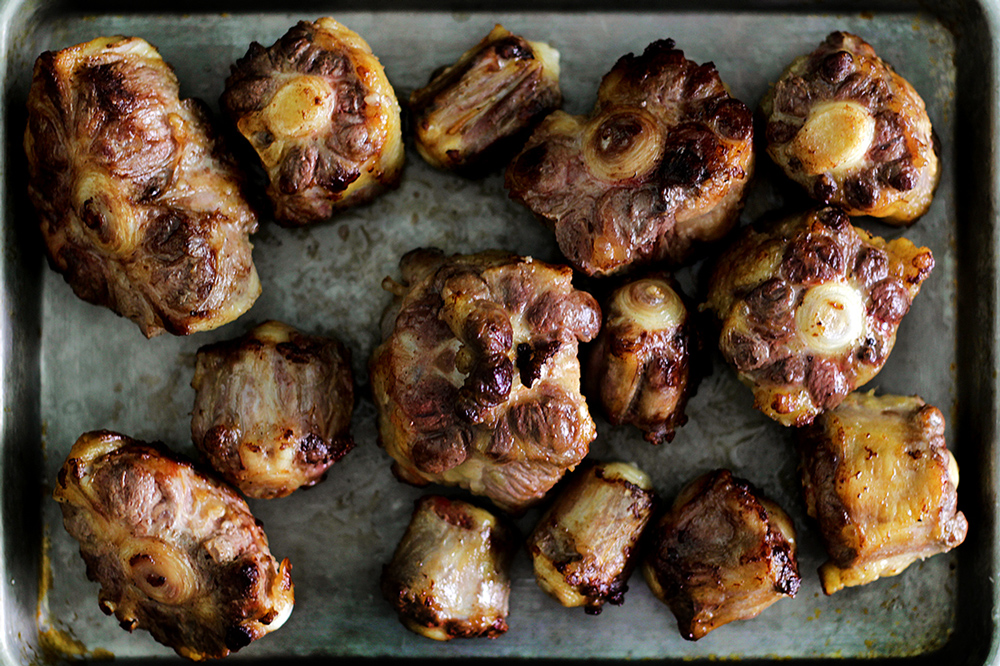 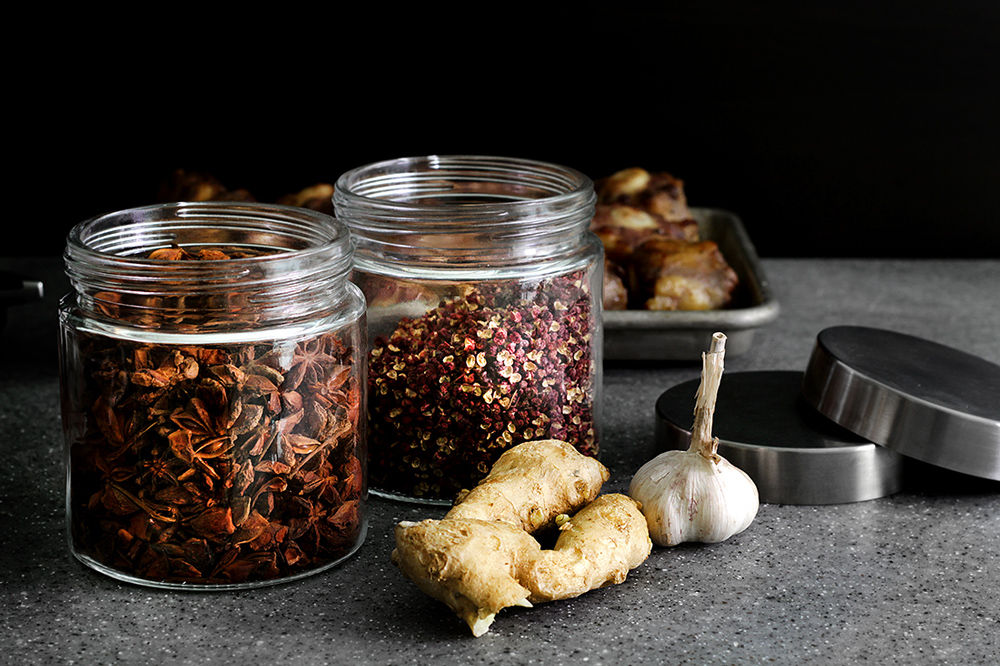 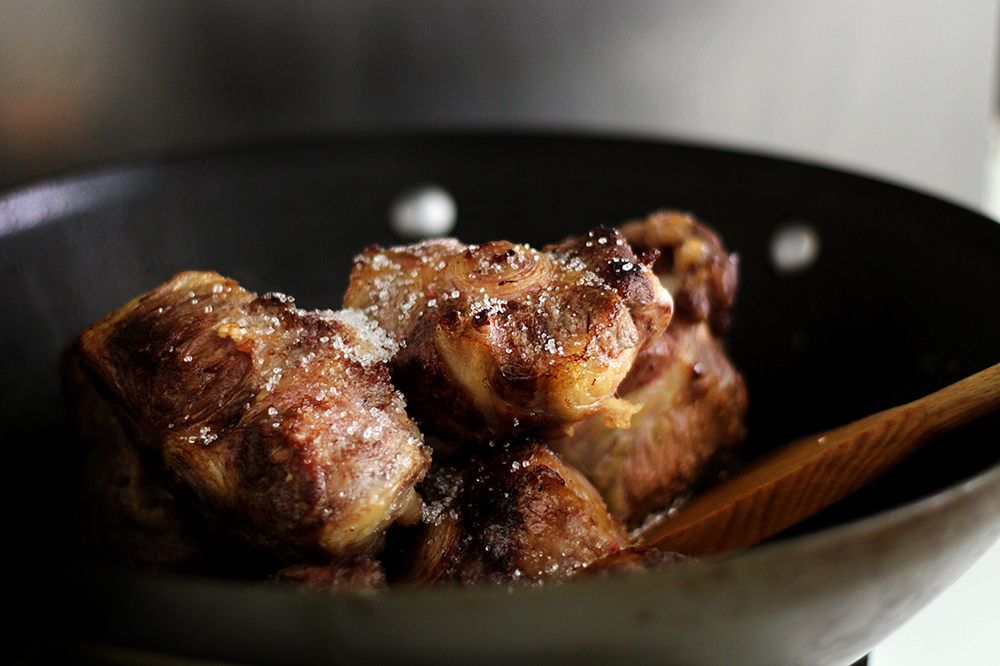 Now now now, just hear me out okay.  I must clarify by establishing what constitutes an “heirloom recipe”, right, which according to Google, means “valuable object (aka recipe) that has belonged to a family for SEVERAL generations”.  Hear that?  Several.  And clearly, every other participant in this particular column has diligently followed such definition… yah yah, I heard “grandmother” the first time a’ight.  Bravo.  Clap clap.  But you see, not to campaign for sympathy vote but purely an FYI for FACT-SAKE, my mom’s mom bye-byed when she was in sixth-grade, and my dad’s mom did so as well when I barely remembered things.  The only “recipe” she left was watercress spinach sauteed with ginger which you know, for the record was undoubtedly delicious but…  KAAA’MON, grandma!  How about something solid I could use to promote my blog, huh?!  Hey how about you, grandpa?  You got someth’n for me?  Oh right, never cooked a day in your life… 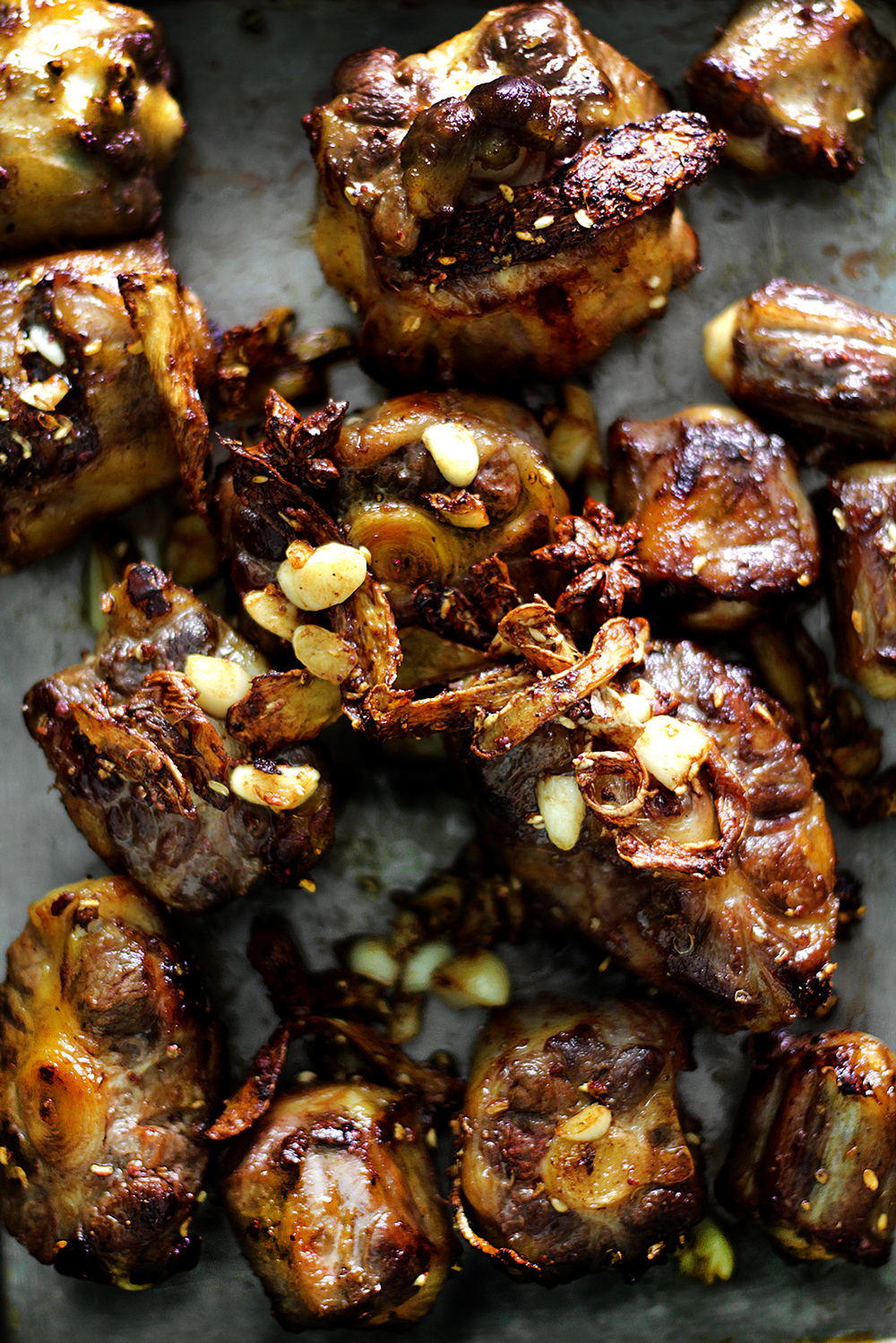 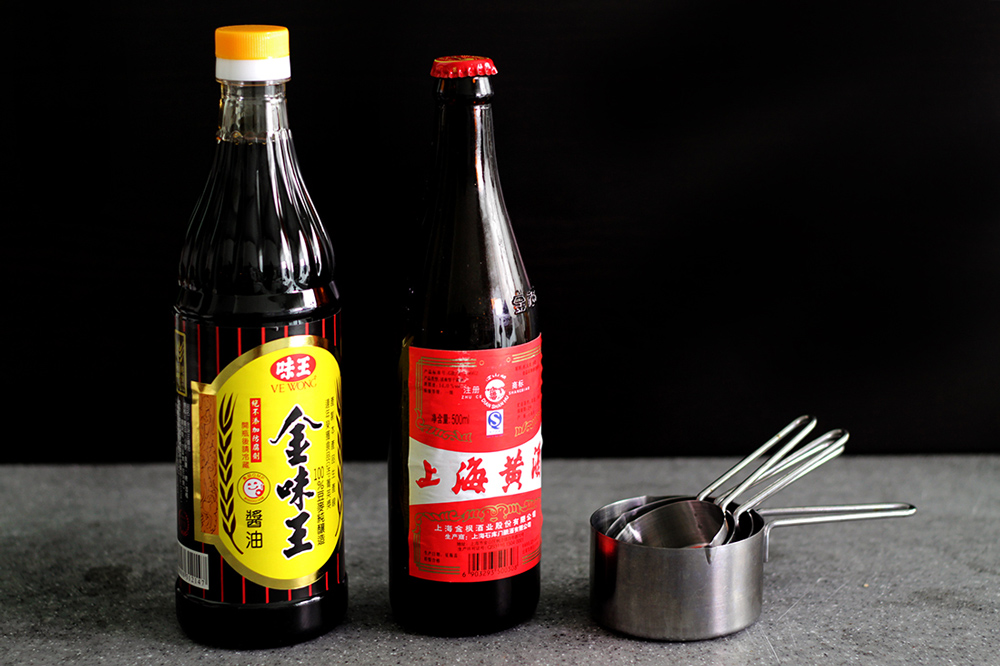 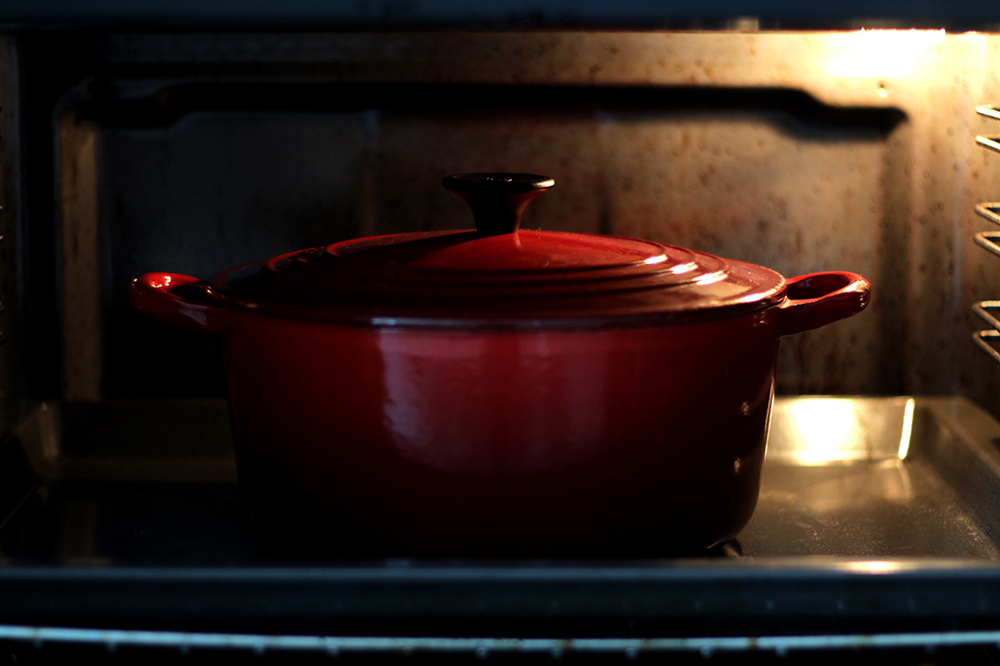 So here I am, fresh out of grandpas and grandmas for a legitimate heirloom recipe… and I guess it’s too late to put myself up for adoption.  But in spite of the despair for a multi-generation story, I am glad and fortunate to say that – food finds a way, as my mother happens to be an excellent cook.  Excellent in the sense that in spite of being a product of her generation, a woman who walked into the kitchen not for the passion and curiosity for cooking, but compelled by the sense of duty that society imposed, she nonetheless turned out to be a celebrated one.  Natural talent… must have gotten it from me.  And for the first time ever to be written down in letters and numbers, I’m going to feature one of my favorite out of all her creations, a dish that I have been eating and making for the past 20 years – sichuan peppercorn red-braised oxtails.  Even though a baby-weight recipe only two generations-old, but knowing that on the other side of the world, you won’t be able to resist passing it down in your family when the INSANE aroma permeates your atmosphere, in the most unconventional but modern sense makes it, pretty heirloom. 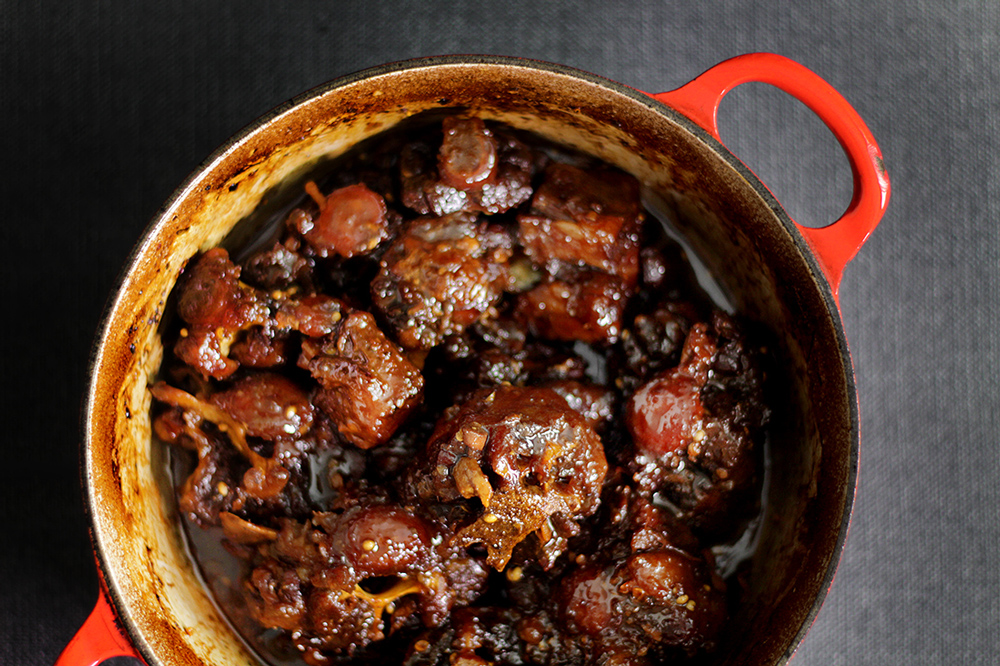 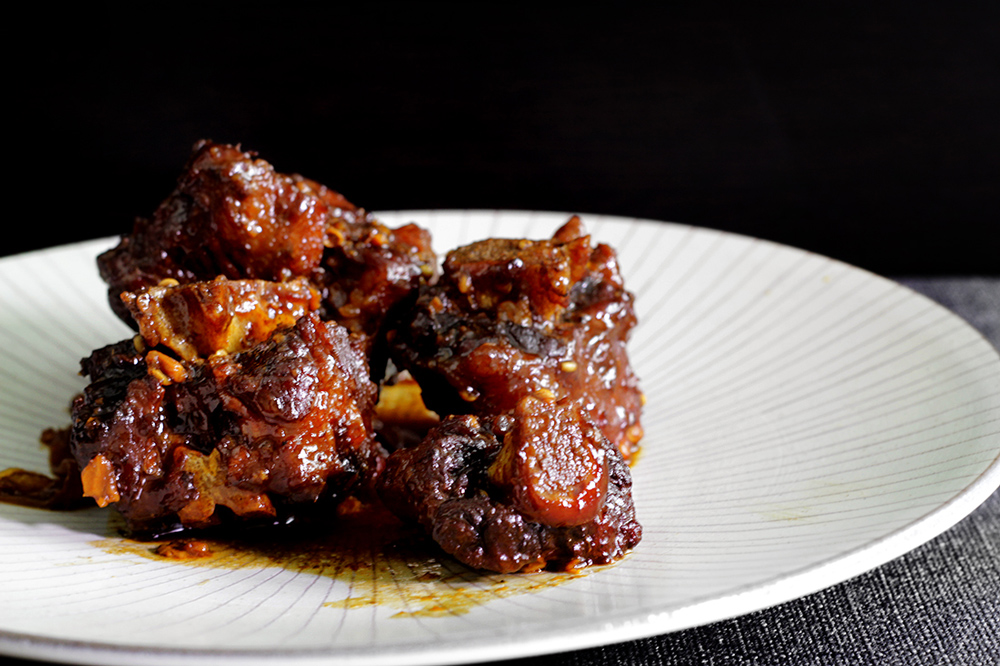 Because this dish involves caramelising the sugar, I strongly recommend doing the initial sautéing/woking in a NON-STICK pot, then transferring the ingredients to an oven-proof pot (like cast-iron) to finish braising in the oven.  In a non-stick pot, the caramelised sugar sticks to the meat instead of to the bottom of the pot, which can easily burn in my experience.  This process is called “red braise” in Chinese cooking, referring to the amber/red sheen from the caramel.

It’s quite important to grind the red sichuan peppercorn because they can be a bit unpleasant to bite into.  You can use a stone mortar or spice grinder to do this, but if you have none, simply wrap the peppercorns in 2 layers of paper towel and smash them with a hammer.

Rinse clean and dry the oxtail with a clean towel.  Heat up a large non-stick wok, or deep saute-pan with 4 tbsp of oil over HIGH heat (don’t worry about the amount of oil because it will be removed later).  Brown the oxtail in batches until entire surface is covered and no more blood is being released.  Set the oxtail aside.  Drain the oil and leave only 2 tbsp in the wok/pan, and turn the heat down to MEDIUM.  Add the ginger slices and cook until they shrivel up and get nicely browned on the edges, approx 5 min.  Add the oxtail back into the wok/pan, along with garlic (if you like it spicy, add 2 red chilis as well), star anise, sichuan peppercorn and granulated sugar.  Turn the heat back on HIGH, and keep turning the ingredients until the sugar has fully caramelised, and all the ingredients are coated in deep brown, amber sheen.

Transfer ALL the ingredients into a cast-iron or oven-proof pot, and return it to the stove.  Add the rice wine and 1/2 cup of soy sauce, and let it gently boil with all the ingredients for a minute (turn and evenly coat the ingredients).  Then add the chicken broth or water, and bring back to a simmer.  The amount of liquid shouldn’t be able to cover the ingredients (this isn’t a stew), and should taste slightly UNDER-SEASONED at this point because of the excess water, which will evaporate during the braising process.  If it taste generally BLAND, then adjust with more soy sauce.

Transfer the pot (with the lid on) to the oven and let braise for 3 ~ 3 1/2 hours.  Go back and turn the oxtail once every hour or so to ensure even braising.  The oxtail should be very tender and almost falling off the bone, and the braising liquid should have reduced dramatically.

After braising, carefully remove the oxtail from the braising liquid without tearing them.  Tilt the pot to direct all the braising liquid to one side, and skim off as much fat from the surface as you can, without reducing the actual sauce on the bottom (there should be QUITE a lot of fat).  Discard the star anise and ginger slices (press on the gingers to extract as much sauce that’s clinging onto them before discarding).  Leave the garlics which should have melted into the sauce at this point.  Return the oxtail back into the pot, and return it to the stove over HIGH heat.  Add 1 tsp of rice vinegar and reduce the sauce SLIGHTLY, just until the oxtail are coated in a shiny sheen.

Serve the oxtail over hot steamed rice.  They get even better the next day.

Mix thinly sliced purple cabbage, onion, Dijon mustard, mayonnaise, rice vinegar, salt, ground cumin and ground black pepper.  Let sit for at least 20 min.  Remove all the meat from the ox tails and discard the bones.  Mix and coat the meat evenly in its braising sauce and warm up slightly (just a gentle simmer) over the stove.  Set aside.

Slice the bread and drizzle evenly with extra virgin olive oil and some black pepper.  Toast under the broiler until golden brown on both sides, then immediately rub the garlic over the surface of the bread while it’s still hot.  Generously apply a layer of braised ox tail, some braising sauce over the meat. and purple cabbage slaw between the sandwich.  Serve immediately while it’s hot. 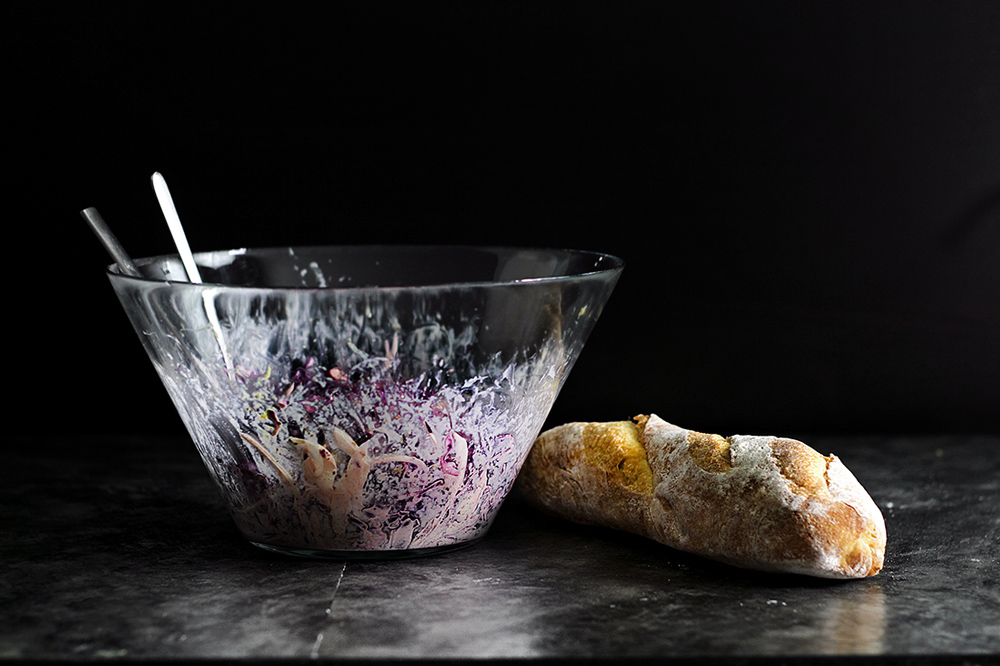 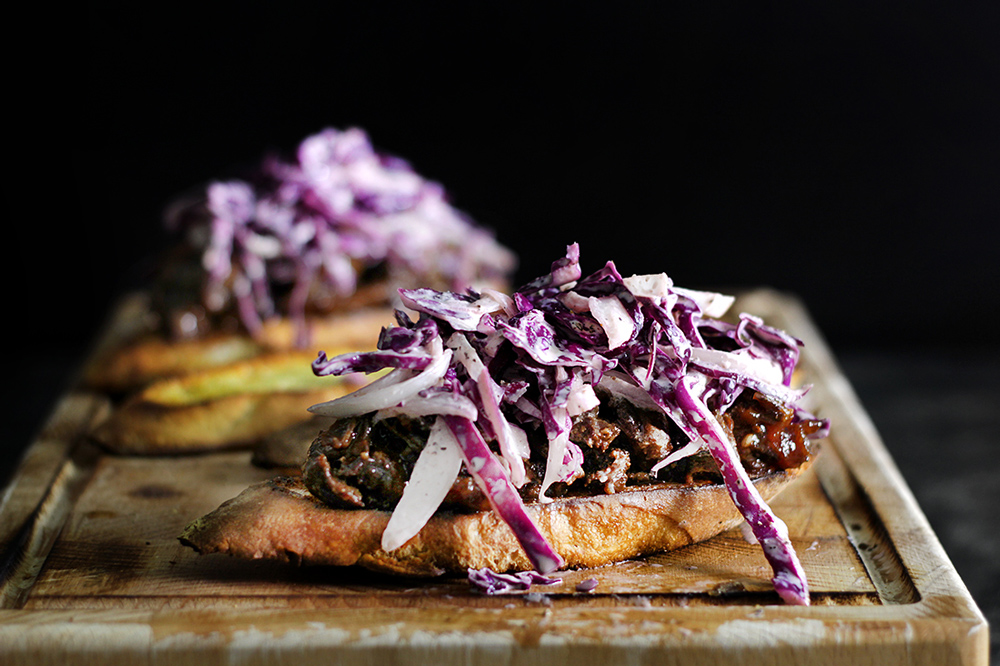 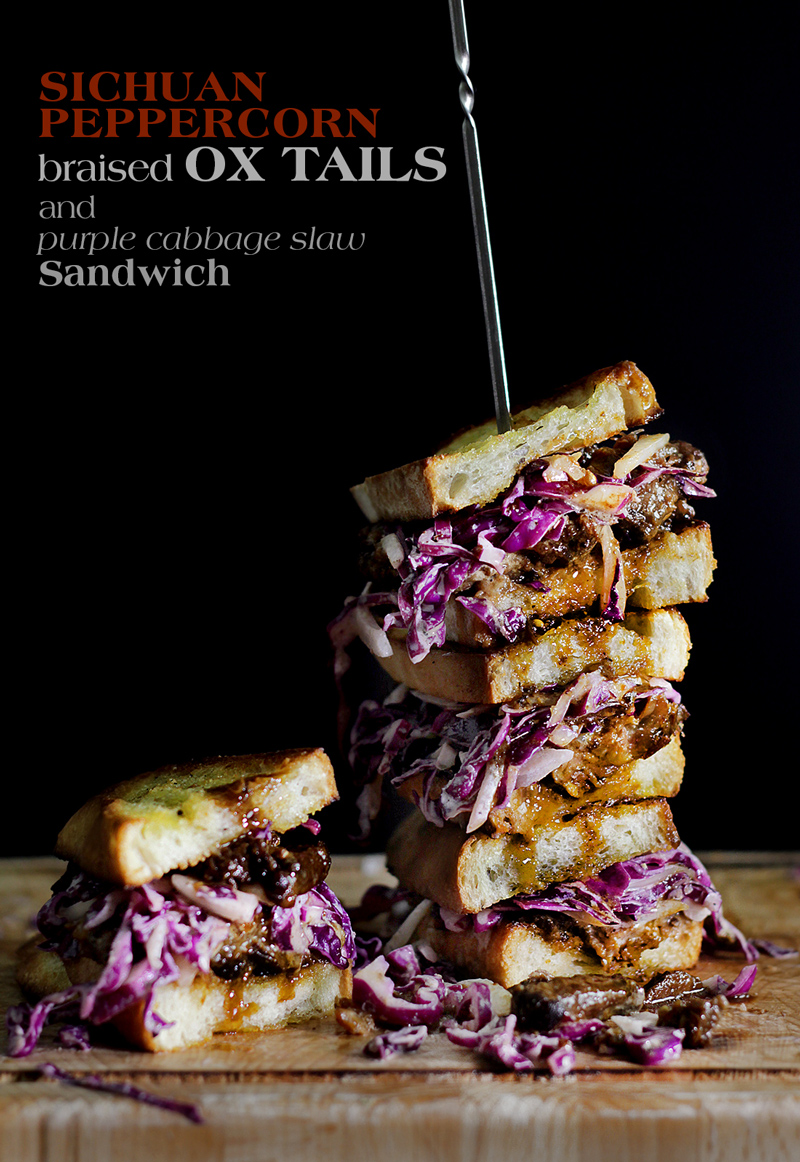