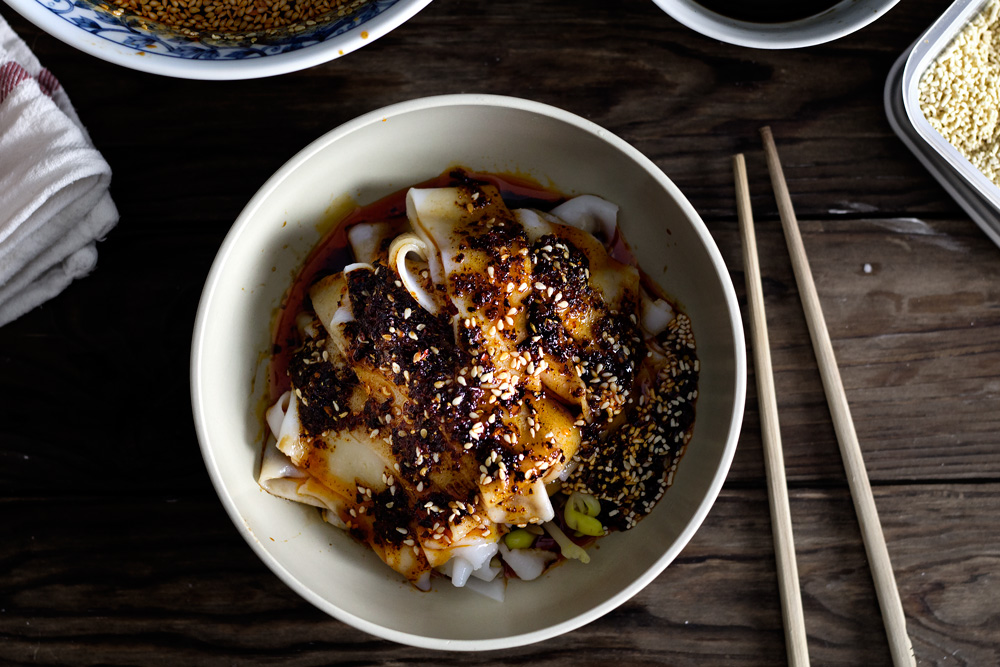 JUST WHEN I THOUGHT THE SHOW WAS GONNA EXIT FASTER THAN IT ENTERED, ON THE SIDE OF A NEIGHBORHOOD ROAD… 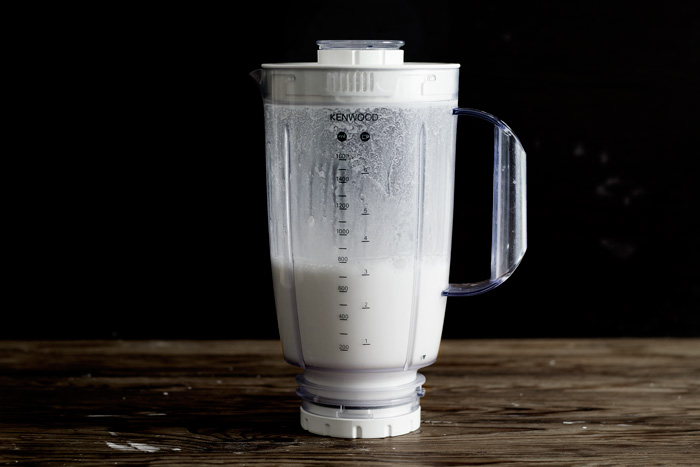 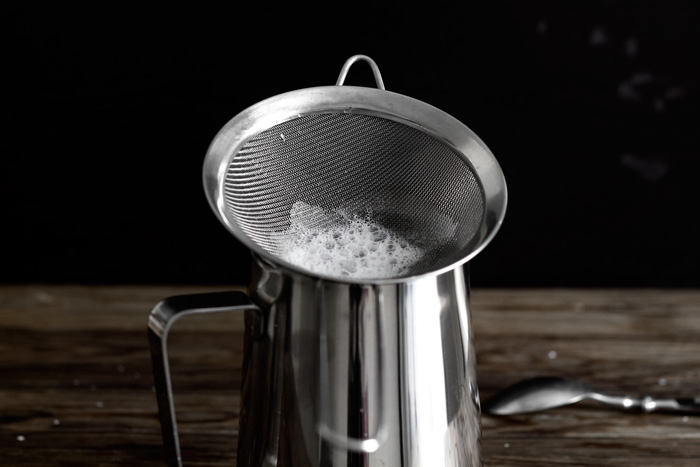 I must admit, my belated appreciation for the hype of Xi’an Famous Foods, was a slow, reversed progression.

Six years ago before we left New York, it wasn’t yet a thing over there.  Then after six years of looming around Hong Kong and then now Beijing, I barely noticed its presence let alone recognizing it as an established “food category”.  It was a shameful episode of my negligence, one of which I could only redeem by… well, help you not to repeat my mistake.  The first noise I heard from this funnily named Chinese regional cuisine from central-west, ironically, was when a few months ago, I was on my Beijing couch watching America’s Food Network featuring a micro-trending street-eats in New York, called “liang (cold) pi (skin)”.  Liang-pi?  You mean, the liang-pi they sold from a booth right next to the cash-register in my local supermarket?  The liang-pi that periodically showed up on my dinner menu?  The liang-pi that, yes, there at the corner groceries as well.  And yes, there at the food-courts in malls, too!  Now that I’m consciously aware of such thing, the liang-pi that was previously invisible to my radar, now appears to be, actually, everywhere! 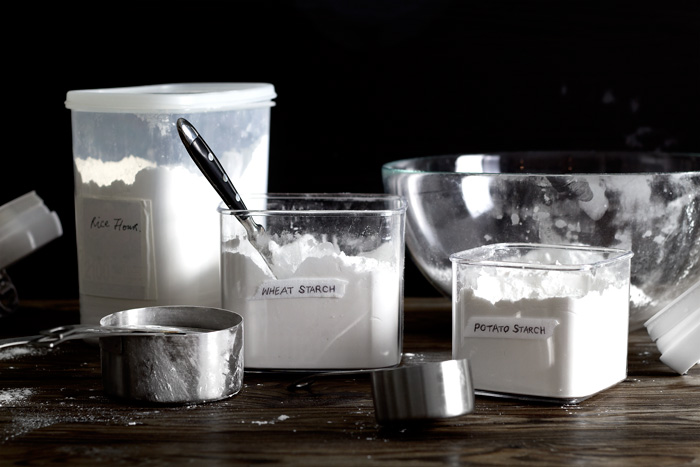 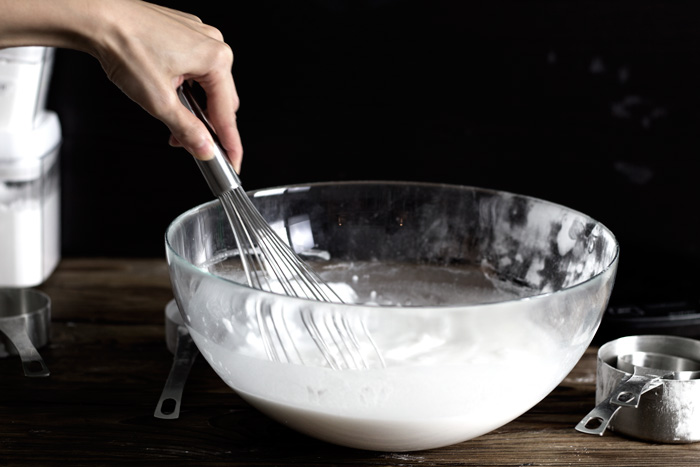 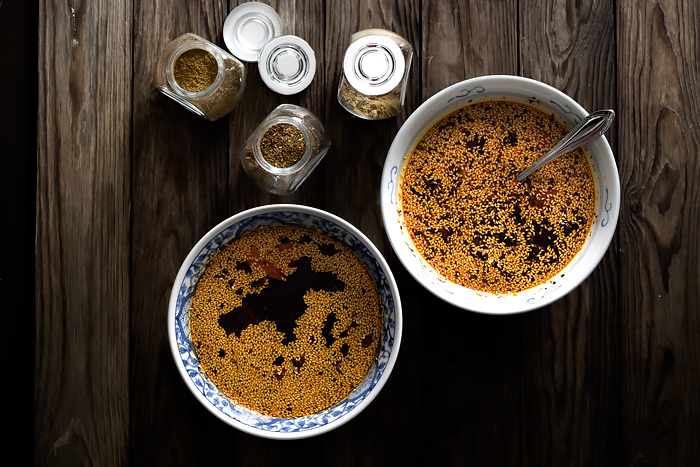 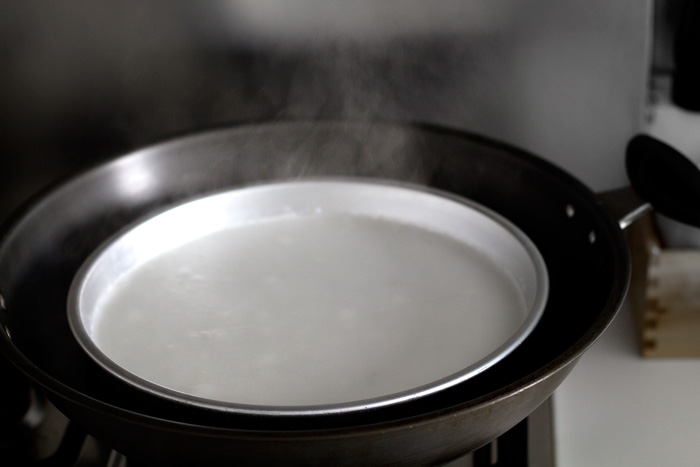 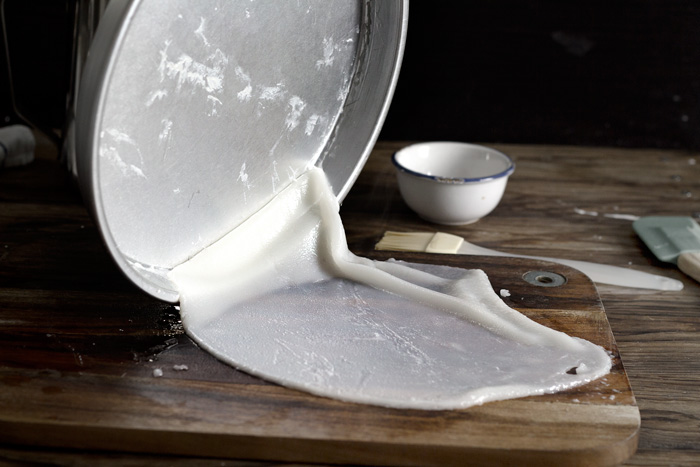 And of course it is not a coincidence that wherever liang-pi hanged, its entourage of cumin lamb “burger” (rou-jia-mo), and hand-torn noodles (biang-biang mian), or lamb offal soup (yang-tang), followed predictably.  The formation and uprise of a complete and entirely new food-category, to me at least, had gathered enough heat in the backdrop for me to welcome our first explosive encounter.

But I was mostly disappointed.

Steady now, New York’s Xi’an Famous Foods-fans.  With gathered informations from photos and method of deduction, I can almost say this with certainly that your famous foods, possibly made from better quantity/quality of ingredients, taste better than here’s famous foods which are often inconsistent in quality.  The liang-pi (cold skin noodle) here is often bland and dominated by cheap vinegar.  The meats in the hand-torn noodles, often scarce if any.  The “burgers”, in short, not famous yet.

Just when I thought the show was going to exit faster than it entered, on the side of a neighborhood road, a new joint opened.

The joint wasn’t discreet to say the least.  For the entire duration of its renovation, a large banner across the construction read “Beijing’s best biang-biang noodle”.  Well, I’d be pretty upset at my PR if I was the owner, because first of all, that statement isn’t hard to live up to, like I said.  Second of all, it should read this instead, “Beijing’s BEST hot mi-pi (rice skin noodle)”, because that’s what this joint has got going on for.

Unlike liang-pi (cold skin noodle) which is made with mostly starches of different sort (wheat starch and cornstarch, etc), mi-pi (rice skin noodle) is mostly made with short-grain rice, with slippery smooth and chewy texture similar to Cantonese zhu-chang-fen, plus the subtle fragrance of short-grain white rice.  But wait, OH-ho-ho~ wait wait just wait, the difference.  The difference, is that they serve the rice noodle still piping hot (in fact, “hot mi-pi” is referring to temperature not spiciness), peeled and cut right out of the steamer, then, and then, douse it with (I’m serious) an ocean of salivatingly aromatic, mesmerisingly maroon (red just doesn’t cut it anymore), senselessly addictive chili oil made with sichuan peppercorns and spices (did you see that 2 giant tubs there that I made?  That’s how much I need it)!

The combination is impeccable, slippery, oily, spicy and tinglingly numbing.  Each fat ribbons of ivory-white, seemingly sticking to one another stubbornly, slides and separates into the red savoury, tangy concoction.  And just when you think it’s too much to take, the pleasure or the heat, an occasional crunch and refreshment from the blanched bean sprouts tells you that, yes you can.

Now this, this should what’s micro-trending.  This should be, as the chubby da-ma (middle-age auntie) who reined the kitchen said to us with a proud chuckle, the everyday food-item people in Xi’an cannot live without.  This should be, as she also said, the kind of breakfast that is worthy of the name, Xi’an famous foods.

Now are you ready to really eat famous yet. 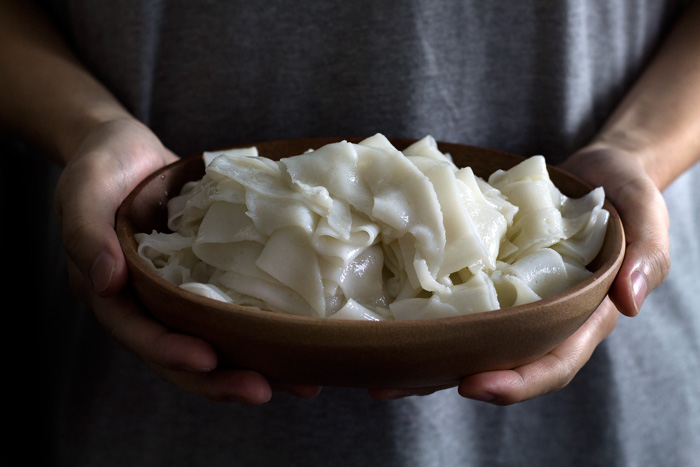 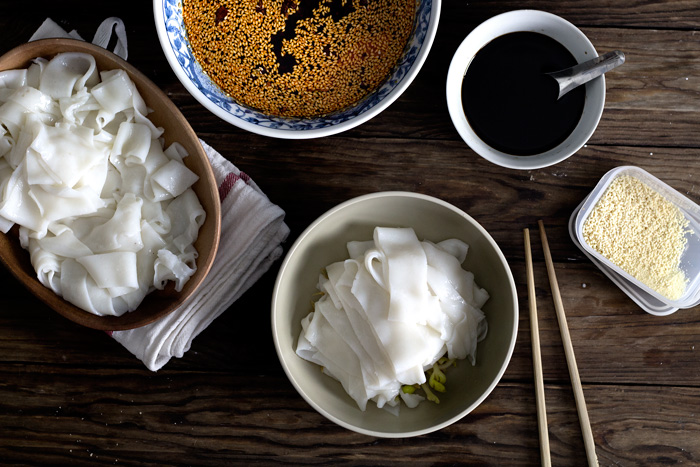 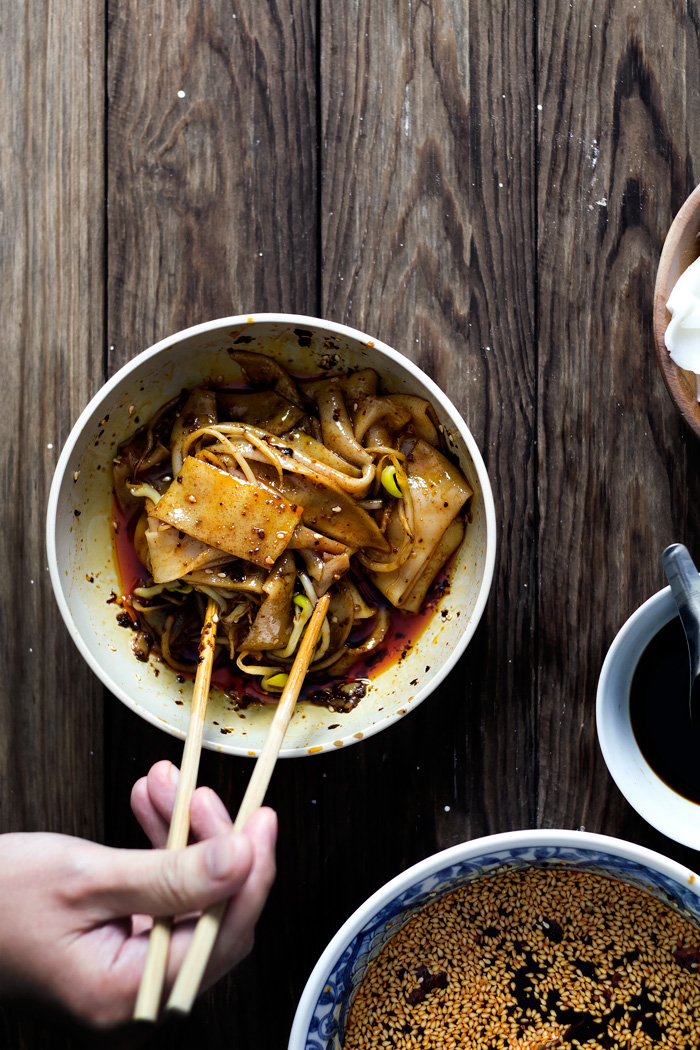 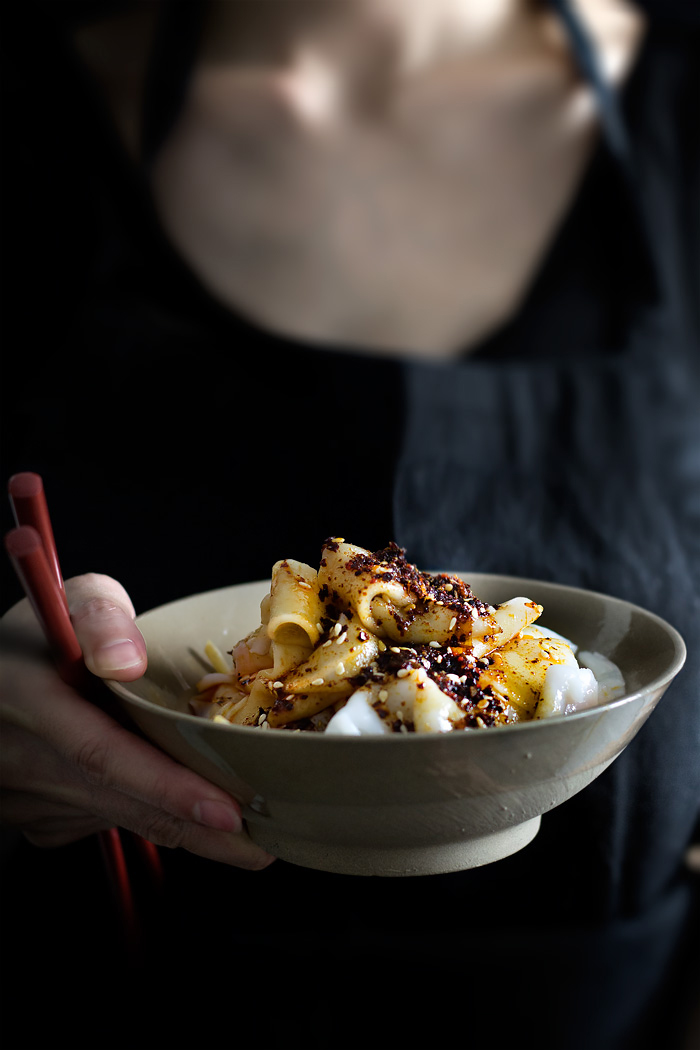 In a perfect world, rice noodles made more conveniently from store-bought rice flour, would yield no difference than the ones made from soaking/blending rice milk from scratch.  But, this is not a perfect world…  In fact, the rice noodles made from scratch are noticeably smoother, more slippery and silky in texture than the quick ones from using rice flour.  Is the difference worth the extra 4 ~ 5 hours of soaking, and the extra step of blending?  In short, YES.  But let’s just say if you find yourself in a must-have-homemade-rice-noodle-quick emergency, the rice flour-version is an adequate substitute.  I’ve included instructions for both.

If your are soaking/blending rice, choose starchy short-grain rice, such as sushi rice or pearl rice, instead of long-grain.  Do no use jasmine rice, basmati rice, or any other long-grain variety.

The chili oil is almost identical to the crushed cucumber salad, except I doubled the ground coriander, and the total volume to make a large batch.  The reason for the doubled ground coriander is because I noticed, from this particular joint, that they use coriander seed oil – a sichuan specialty – to make their chili oil.  Since I doubt that most of you would have access to that kind of thing, I boosted the ground coriander to make up.

Why is granulated chicken bouillon in this recipe?  It’s MSG.  That’s how it’s authentically done.

To make the chili oil:  Mix the soy sauce and grated garlic together, then set aside.  Combine canola oil, chili flakes, white sesame seeds, star anise, dried bay leaves, ground coriander, ground cumin and curry powder (leave the ground sichuan peppercorn for later!) in a large, deep pot and set over medium heat.  Bring to a gentle boil and fry the mixture for 3 ~ 4 minutes, stirring constantly, until the chili flakes have turned darker in color (but NOT BLACK!!).  Turn off the heat immediately, then add the ground sichuan peppercorn.  Stir and let fry in residual heat for about 10 seconds.  Then add the soy sauce/grated garlic mixture.  The oil will boil up a little due to the added moisture.  Just keep stirring until the sizzling has died down.

Let the chili oil sit for at least 2 hours, or best overnight before using.

UPDATE 2016/01/05:  The “short grain rice” I used for blending the rice-mixture was called “東北大米”, and not the typical “pearl rice/sushi rice”, which can be extra soft and sticky.  There are so many variety of rices which makes it difficult to specify in a recipe.  But if the varieties available in your supermarket are the commonly found sushi rice or pearl rice, I would suggest blending 40% of sushi rice with 60% of jasmine rice to try to reach a good balance.  Good luck!

UPDATE 2017/02/13:  I forgot to specify that rice flour should be equivalent IN WEIGHT, not volume.

To make the rice noodle batter from scratch:  Put the rice in a large sieve and rinse clean under water.  Shake off any excess water, then transfer the rice to a blender, along with 535 grams of water.  Let soak for 4 ~ 5 hours.  The grain should crush easily between your fingers after soaking.  Then add the potato starch or cornstarch, and blend for 2 ~ 3 minutes (stopping for 30 seconds in between if your blender needs rest) until finely pureed.  Run the mixture through a very fine sieve, into another large bowl.  Use a spoon to press on any larger rice-bits, to help crushing and passing them through the sieve.

To make the rice noodle batter from rice flour:  Whisk together rice flour, potato starch of cornstarch and water together until even.

To cook the rice noodle:  Bring the water inside a large steamer to boil, and keep on high heat during steaming.  You can use any shallow sheet-pan that fits into your steamer, and it would significantly speed up the process if you have 2 rotating pans to use.  I am using a pizza-pan for my wok-turned-steamer.  Brush the interior of the pan very thinly with canola oil, then pour enough batter to cover the pan in a thin layer (WHISK THE BATTER EVERY TIME BEFORE YOU POUR).  Place the pan inside the steamer as levelled as you can (so the noodles are even in thickness), then put the lid on and steam on high heat for 2 ~ 3 min.  The rice noodle is done when the surface form large air-bubbles (don’t worry it will deflate in a split second).  Remove the pan from the steamer, and place with the rotating pan filled with thin batter, if you have 2 pans.

Thinly brush the top surface of the cooked noodle-sheet with canola oil, then run a spatula around the edges.  Tilt the pan so it faces the counter, then gently scrape the noodle-sheet onto a cutting-board, and cut into thick strips with pastry-cutter.  Don’t worry if your sheet is more “curled/rolled up” than a “flat sheet”.  The noodles will stick to each other no matter what in the absence of liquid.  Don’t freak out!  They will separate more easily once sauce is applied.

Repeat the process until you’re done with all the batter.  Serve the cut rice noodles with blanched bean sprouts, seasoned soy sauce, 1/4 tsp of granulated chicken bouillon and LOTS of chili oil. 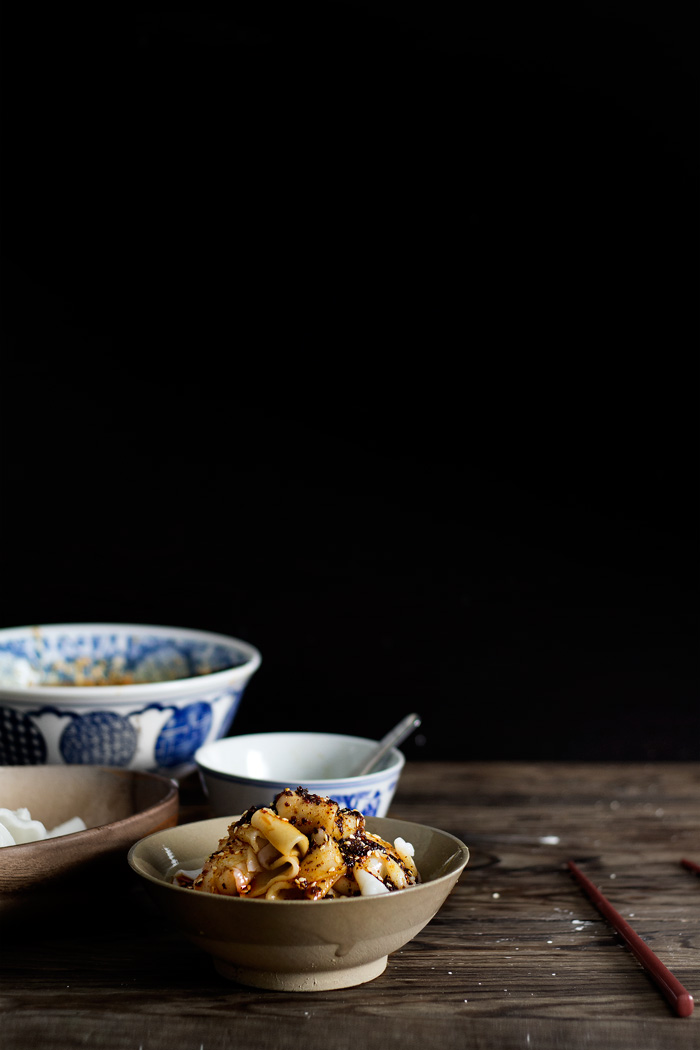