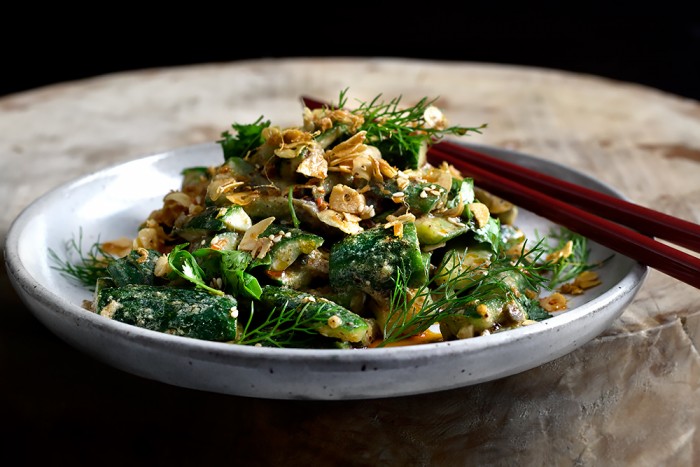 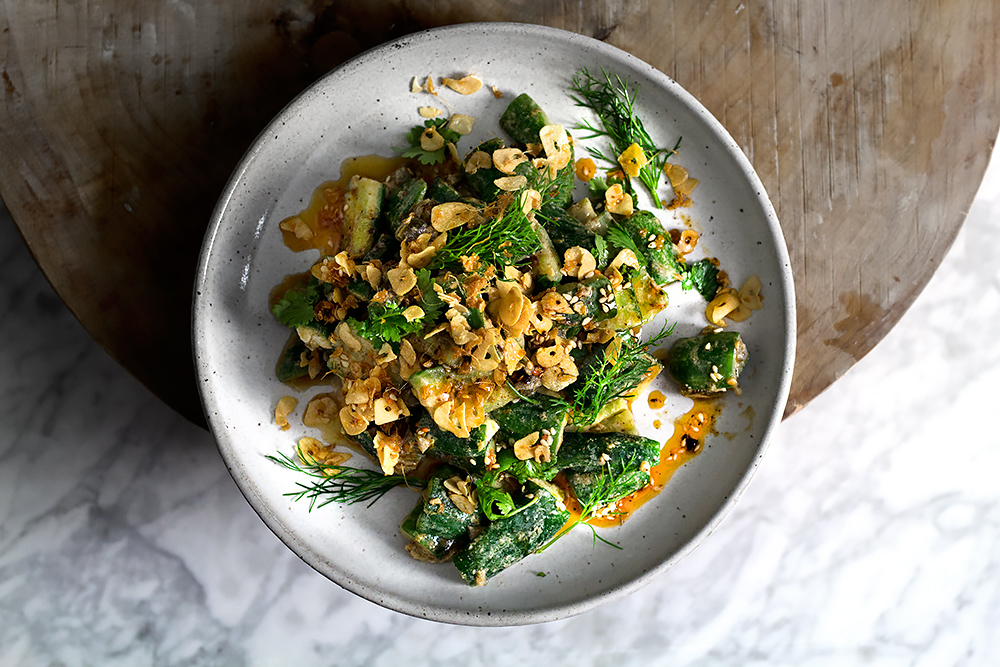 THIS IS A CONVICT YOU’LL WANT TO FORGIVE, AND EMBRACE

I don’t mean to sound self-absorbed and overly theatrical if I mustn’t, but officers, I have a stalker.

Please, listen to me before you dismiss my report after I tell you that, yes, it’s a cucumber salad.  Harmless and gentle it may sound, but believe me when I say that this fella, is spicy… hard-core, and possibly painful.  And it has been disturbingly obsessed with me since… oh~ officers, at least a couple months!  I can’t provide the exact records of its past appearances because, you know, that’s the creepy thing about stalker-recipes.  Their shadowless movement between the blink of an eye, tailed with the constant awareness that it’s always there…  I know I saw it smiling at me between the flips of webpages somewhere during my cyber-surfing, multiple times, or was that through my swiping finger over the stacks of e-magazines?  And I could swear, officers, that it winked at me from the dinner-menu of at least two, or several restaurants that I’ve been to lately, plain-naked and sending me its very explicit intention. 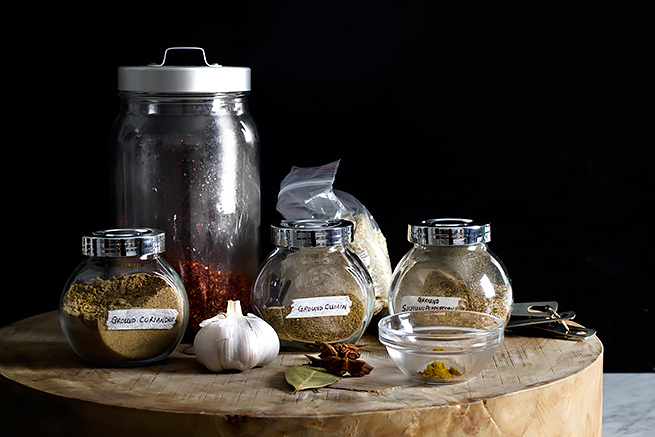 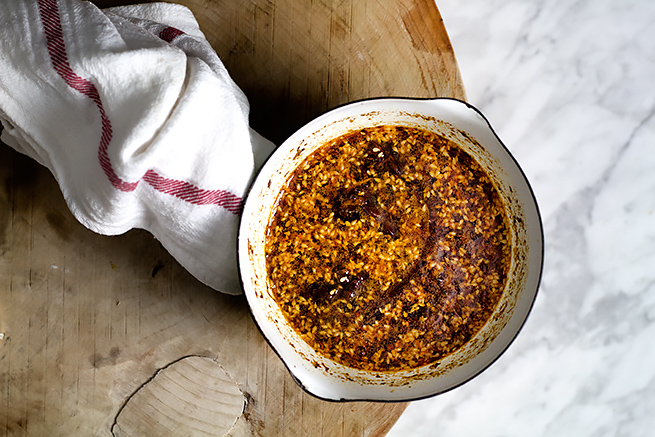 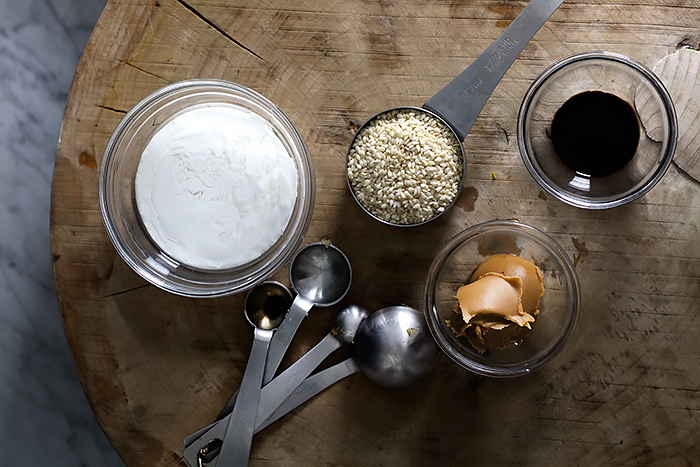 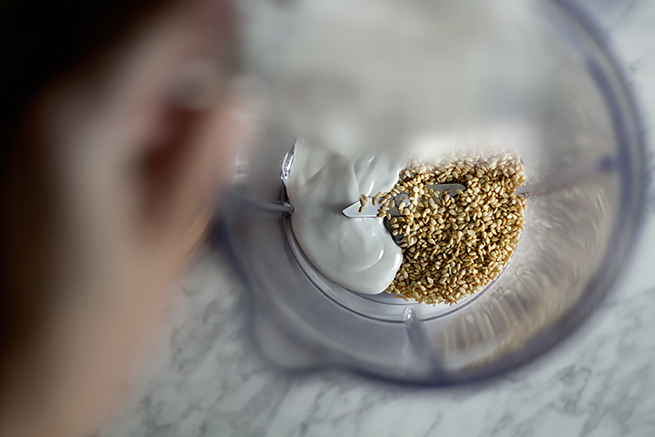 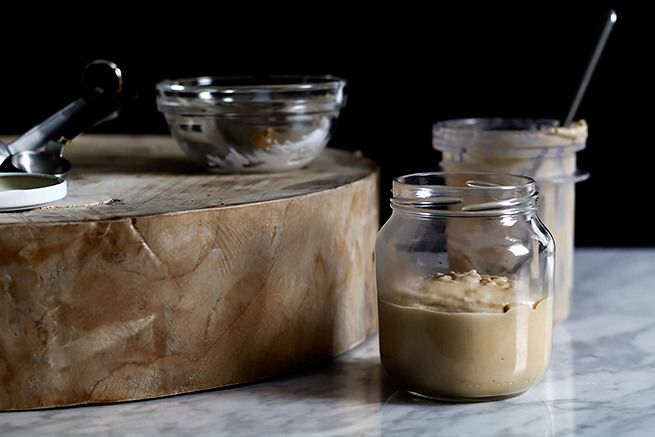 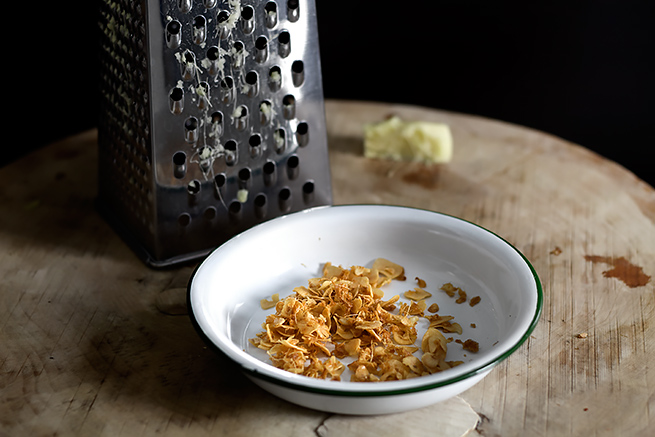 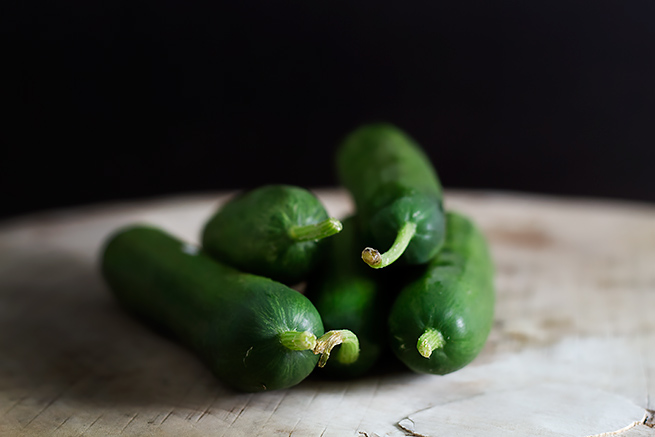 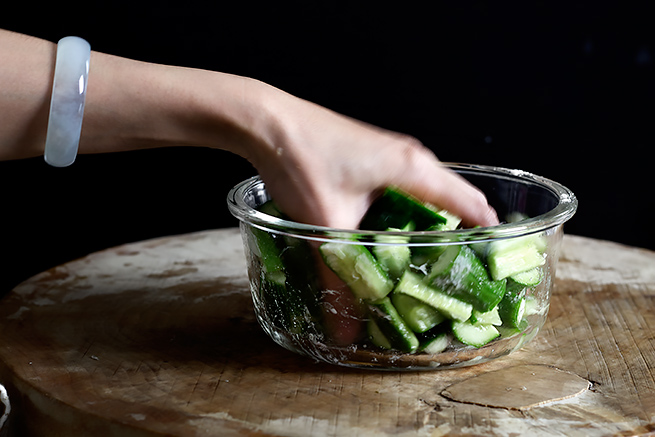 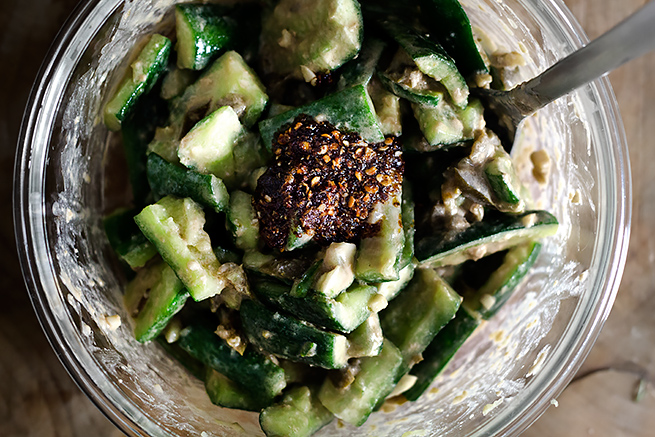 Of course, I’m perfectly aware that the least recommended tactic, if any, on the restraining-stalkers-maual, is to… actually engage.  So why would I?  Well, the thing is, as sick and revoltingly brainwashed this may sound, somewhere during our extensive predator-and-prey dance, something emotional happened, some kind of… Stockholm syndrome if you will.  In the mist of coyishness and suspense, now I can’t help but feeling like… I kind of want to eat it, too.

If you could, officers, gasping on the side, allow me to go on to make my case that this is a rare convict you’ll want to forgive and embrace.  Since nowhere from my brief glances of its shadow, did I receive an open and satisfying introduction, I tried very hard to draw the final profile of how my stalker-recipe would like to present itself on our very first… date, I guess.

Crushed cucumber salad, officers, is its full name.  But that’s about the only consistency in its appearances.  For the rest, I’d imagine that… right, it mustn’t be watery.  Nothing less appetizing than a drippy-wet and boring stalker, is there?  A little sexy salt-rub and curing to rid of its excess water, so that a firm and crunchy… a possibly manful stud it has to be.  Then!  Then, are you too excited yet officers!  Then it has to be classically dressed, timeless and tasteful, in an inner-lining of nutty sesame paste with a hint of coconut-tropics, and a sharp edge of balsamic vinegar.  But classic it may be, boring it better not.  I can see it now… walking under a bold coating of spicy and seductive chili oil to express confidence and complexity, then a dash with crispy-fried garlic and ginger chips to end the case, all in all, that I was just an insane and hopeless stalker-lover.

Officers, you see now that this is a tale that started with disturbance but ends in passion.  As much as a stalking cucumber was so not my type, we bonded.  More.  I couldn’t stop eating it.  I know that somewhere within you, right this moment, there’s a little voice… slightly creepy but tempting.  Now, who’s stalking who? 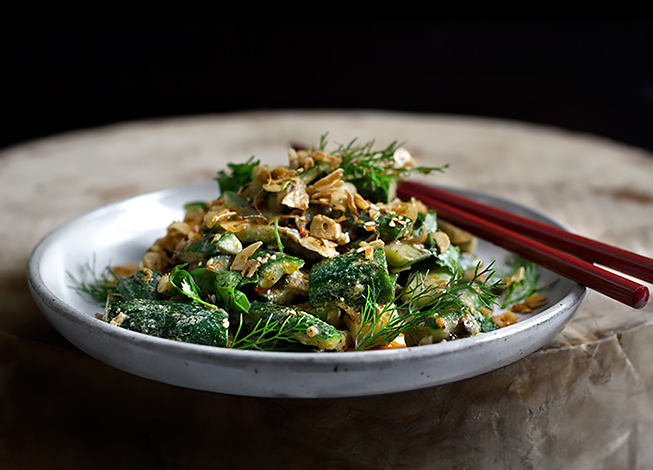 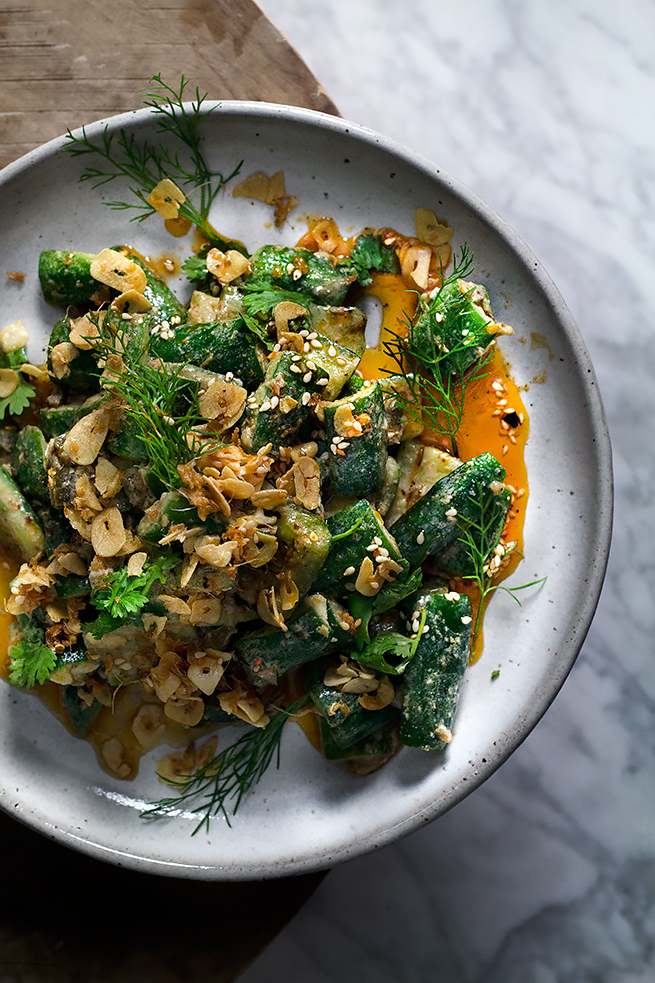 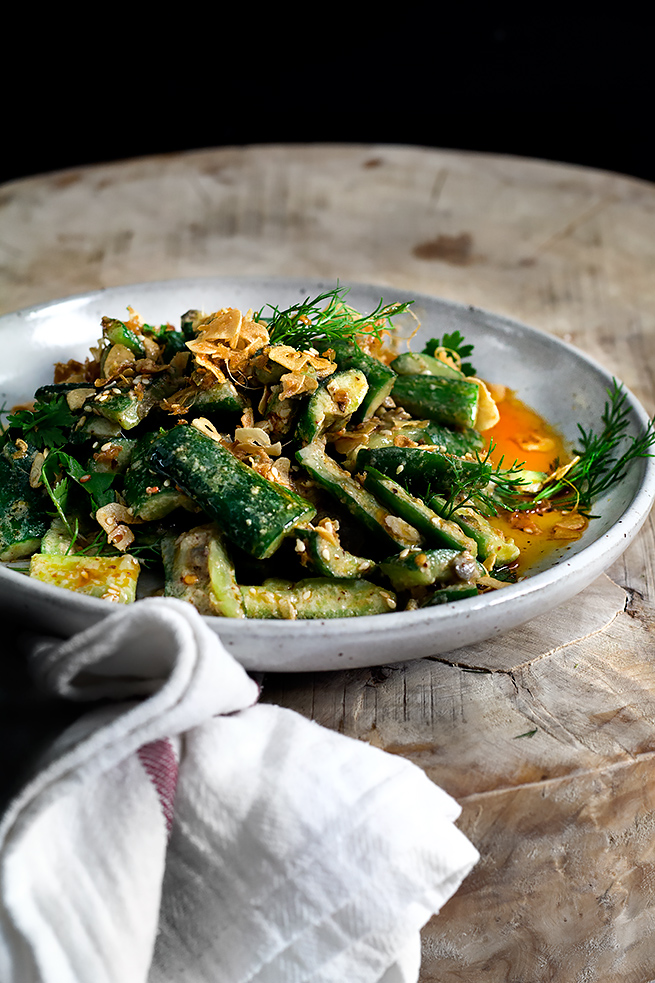 To make the chili oil (can be made days ahead and kept in fridge):  Combine vegetable oil, chili flakes, sesame seeds, star anise, by leaf, ground cumin, ground coriander and curry powder in a small pot and set over medium-low heat.  Bring to a simmer (the oil should be gently bubbling) and fry for about 3 min, until the chili flakes have turned darker in color.  Turn off the heat, then stir in ground sichuan peppercorn, soy sauce and grated garlic all at once.  The residual heat should keep the oil bubbling for another 10 ~ 20 seconds.  Let sit for at least 2 hours or overnight before using.

To make the sesame and coconut dressing(can be made days ahead and kept in fridge):  I recommend using a jar/grinder-attachment of your blender for this task (or using a Mason jar for the same effect).  If your blender doesn’t come with a jar/grinder-attachment, or unable to be attached to a Mason jar, I would recommend doubling the recipe (so there’s enough volume) in order to achieve a smooth puree inside a regular blender.

If you are using un-toasted sesame seeds, toast them in a skillet over medium heat, stirring constantly until they are slightly but evenly browned.  If you are using toasted sesame seeds, warm them in a skillet over medium heat just to bring back the aroma.  Then add the toasted sesame seeds, coconut milk, smooth peanut butter, balsamic vinegar and salt inside the blender/grinder-attachment.  Add 1/3 cup of water first and blend until the mixture is smoothly pureed.  Add a little more water if the consistency is too thick to be blended.  Transfer to a container and keep in the fridge until needed.

To assemble the salad:  Add enough vegetable oil in a small pot (the smaller the pot, the less oil you need) until it reaches 1/2″ deep.  Add 2 tbsp of minced ginger and 2 tbsp of minced garlic (or shaved), give it a stir so they are not sticking together, then set over medium heat.  Once the oil has come to a bubble, fry for approx 5 min, stirring constantly, until the ginger and garlic turns light brown.  They will continue to darken after removed from oil, and any dark then a medium-brown will be bitter.  Drain immediately through a fine sieve and lightly season with salt.  Set aside.

Trim off the ends of the cucumber and smash/crush it with the side of your knife so they are broken apart.  Remove any watery seeds if any, then cut into segments.  Mix the cucumbers with 1 tsp of salt and 1 tsp of sugar, then let sit for 20 min to extract water.  After which, rinse them off of any excess salt, then squeeze hard to rid of excess liquid and transfer to a mixing bowl.  Add 1 clove of minced garlic, toasted sesame oil, chopped pickled jalapeño, and 2 tbsp of sesame/coconut dressing to generously coat, and 1/2 tbsp of chili paste or more to your liking.  Mix evenly and transfer to a serving dish.

Sprinkle the fried ginger/garlic chips over the top then drizzle with more chili oil.  Add a few fennel fronds or cilantro just to be pretty, and serve immediately.