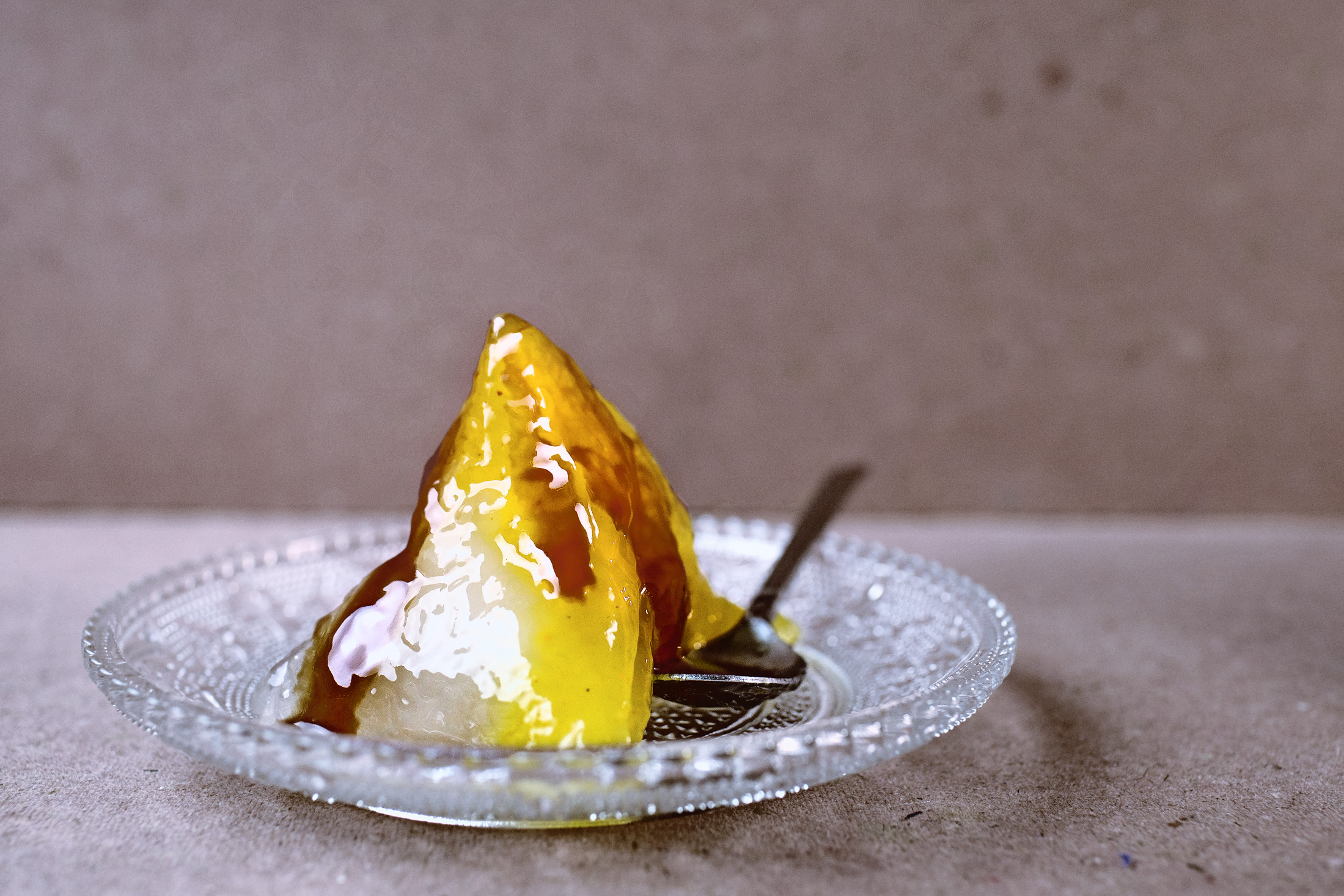 WHAT:  Beautiful, jewel-like, crystal dumplings called zongzi made purely with sago pearls, which I didn’t actually eat in Singapore.

WHY:  Although, as far as I know, this is technically not a “Singaporean thing”, but there’s no reason why it shouldn’t.  Its glossily translucent and elegantly geometric body is made entirely with tapioca sago pearls, making it enthusiastically bouncy, springy, chewy, the most texturally cheerful dumpling out there served cold with coconut dark brown sugar syrup.

HOW:  By soaking and various natural coloring agents, we are turning plain sago pearls into colorful mushy fillings that, through baptism of boiling water, transforms into these gem-like, glassy and slick dumplings that are wonderfully chewy, cooling and simply euphoric to look at.  It’s a texture thing, very much like the addictive quality of tapioca pearls inside boba teas.  The single source of fragrance and flavor that is fused into these dumplings (except the green ones that are made with pandan leaf) depends solely on these spear-shaped leaves, often times called zongye (dumpling leaf), mostly harvested from a particular type of East Asian evergreen bamboos.  It’s hard to describe it to those who haven’t personally experienced it, as it is a truly unique fragrance.  In my best ability, but probably inadequate, I would say it’s a combination of very intense corn husks and grassy tea leaves.

If you feel wary of this unfamiliar ingredient, trust me, once I was too.  But after getting over my illogical fear – one that wasn’t even inconvenient because you can buy these leaves with only a few clicks on your computer – I am now so in love of it that I want to use the leftover, incredibly aromatic cooking water as a base for soups!  And once I’ve learnt how fun it is to shape them, I just want to sit by a sunny window and make zongzi all day long.

Staying in line with the Southeast Asian flavors of this series, I’m proposing a serving syrup made with coconut milk, dark brown sugar and sea salt, mimicking the flavor of palm sugar.  But any other sweethearts like honey, maple syrup, or date syrup will do, too. 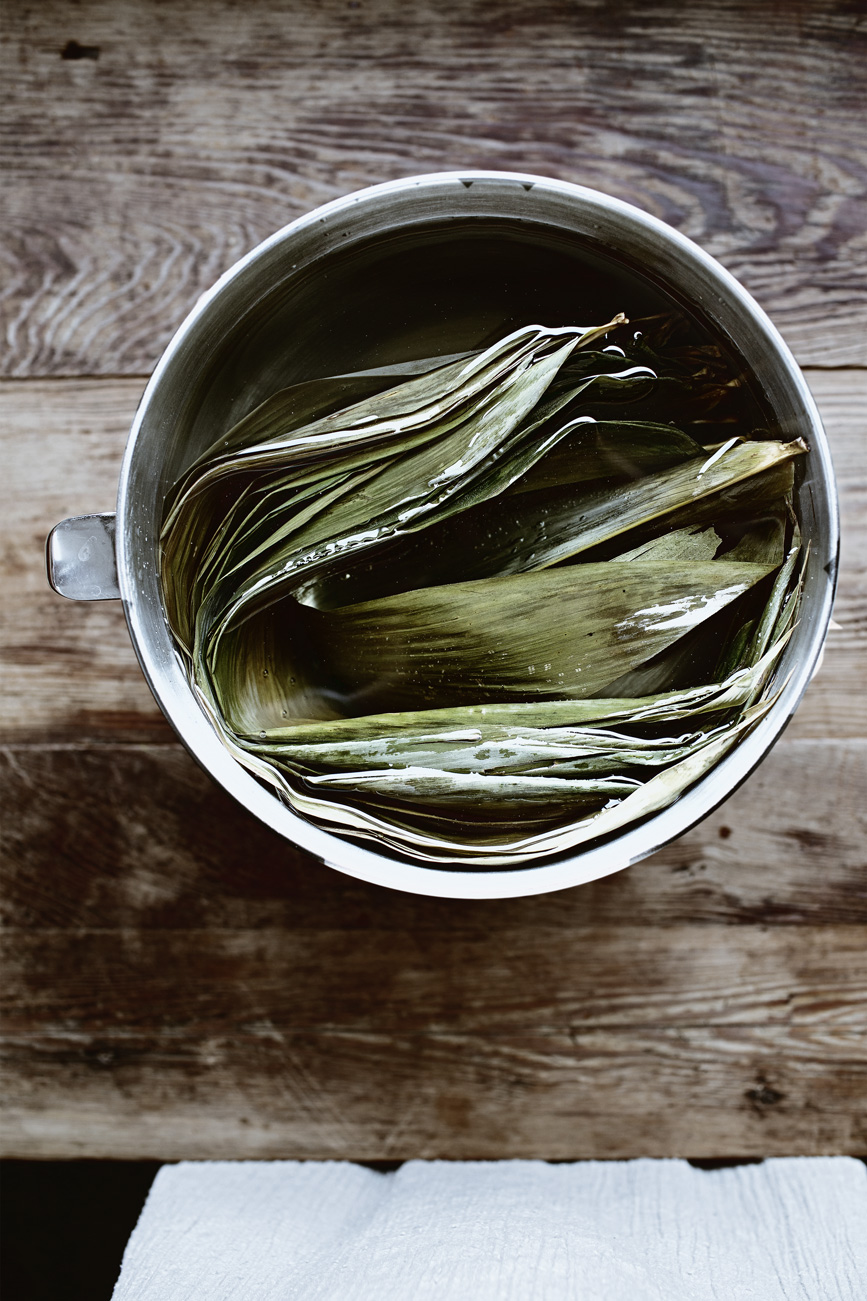 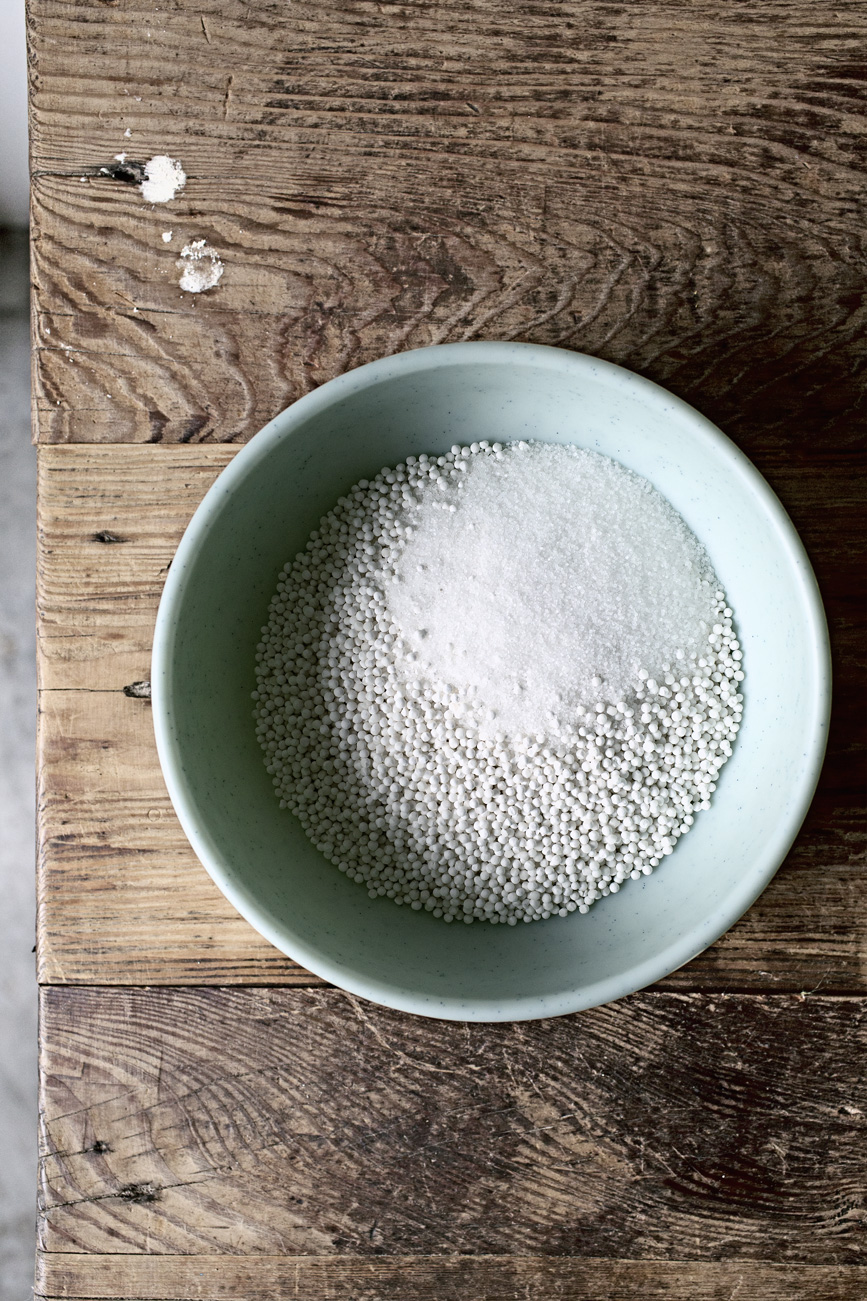 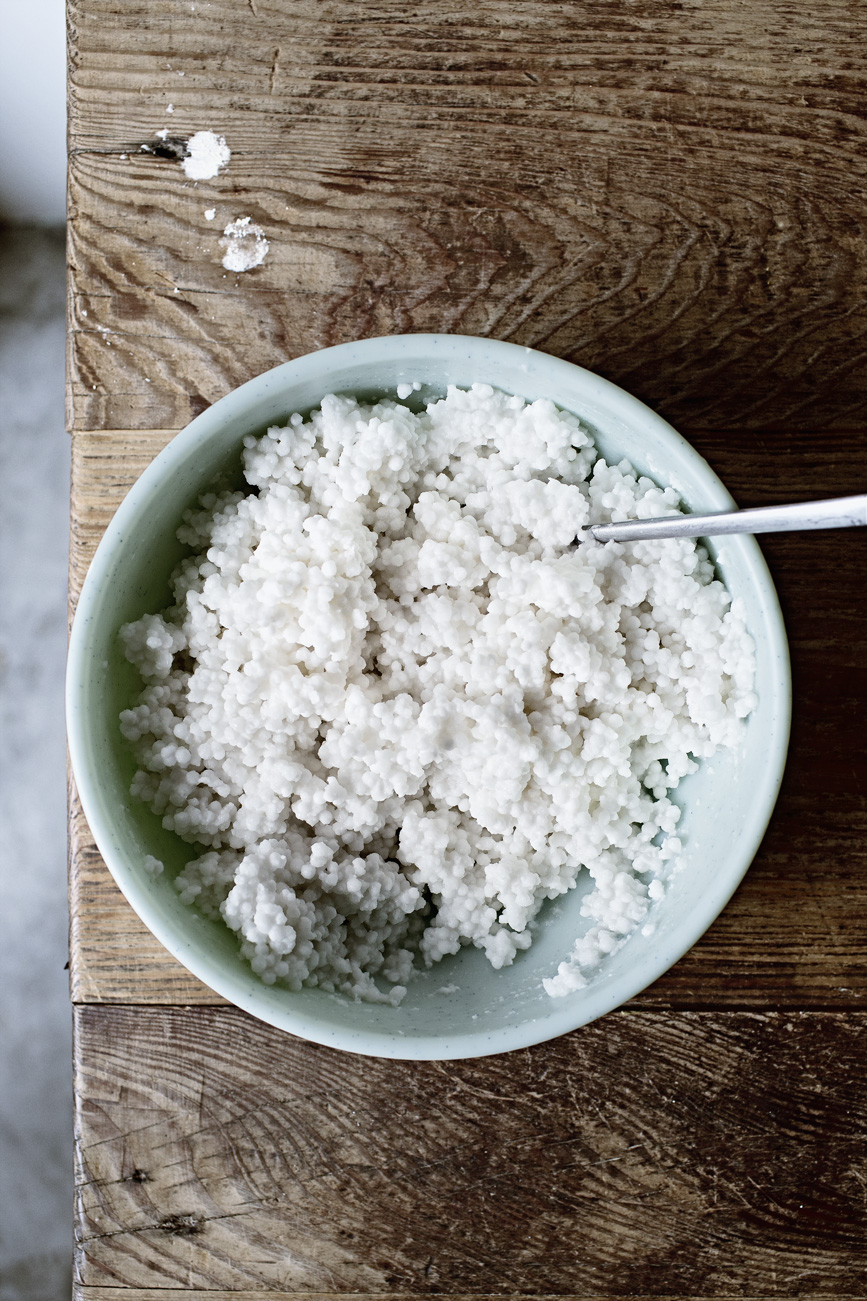 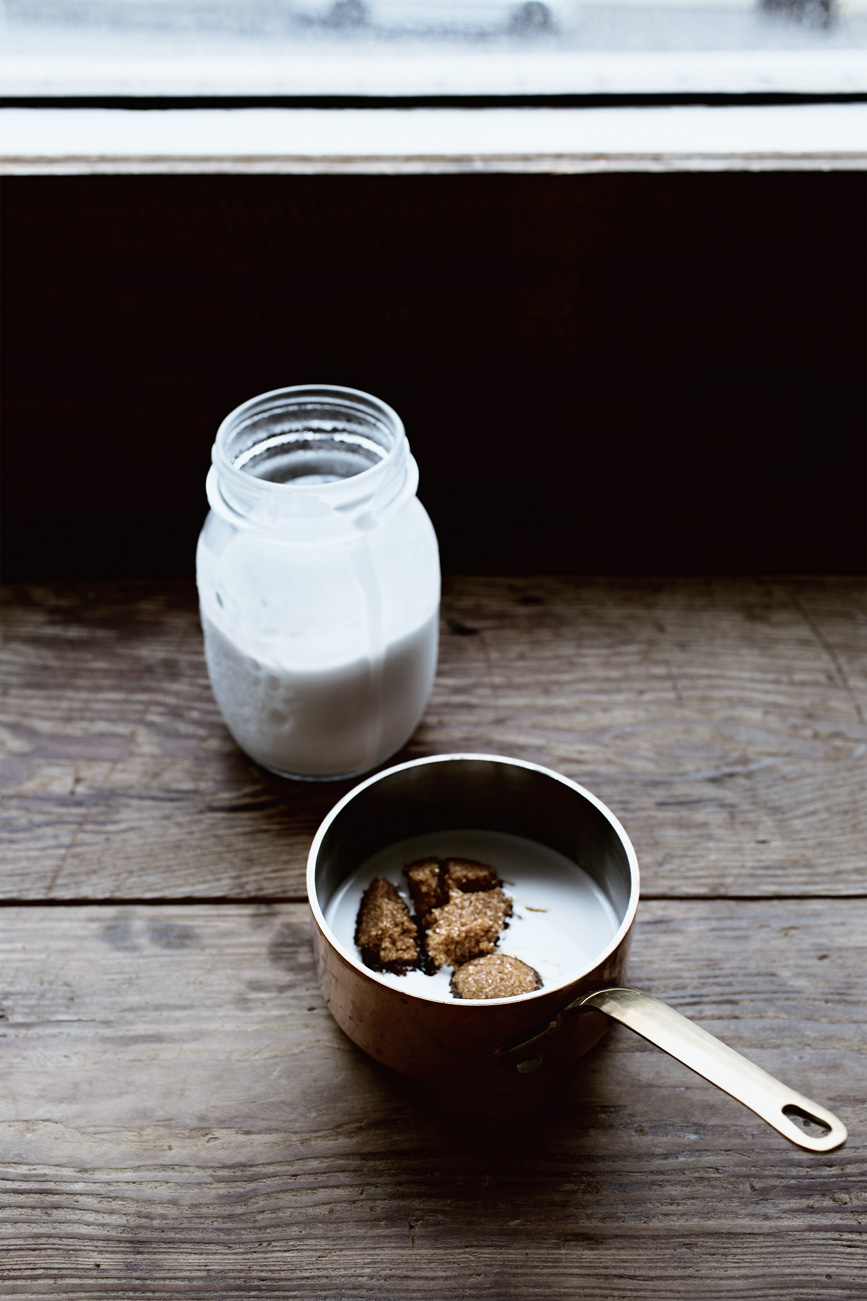 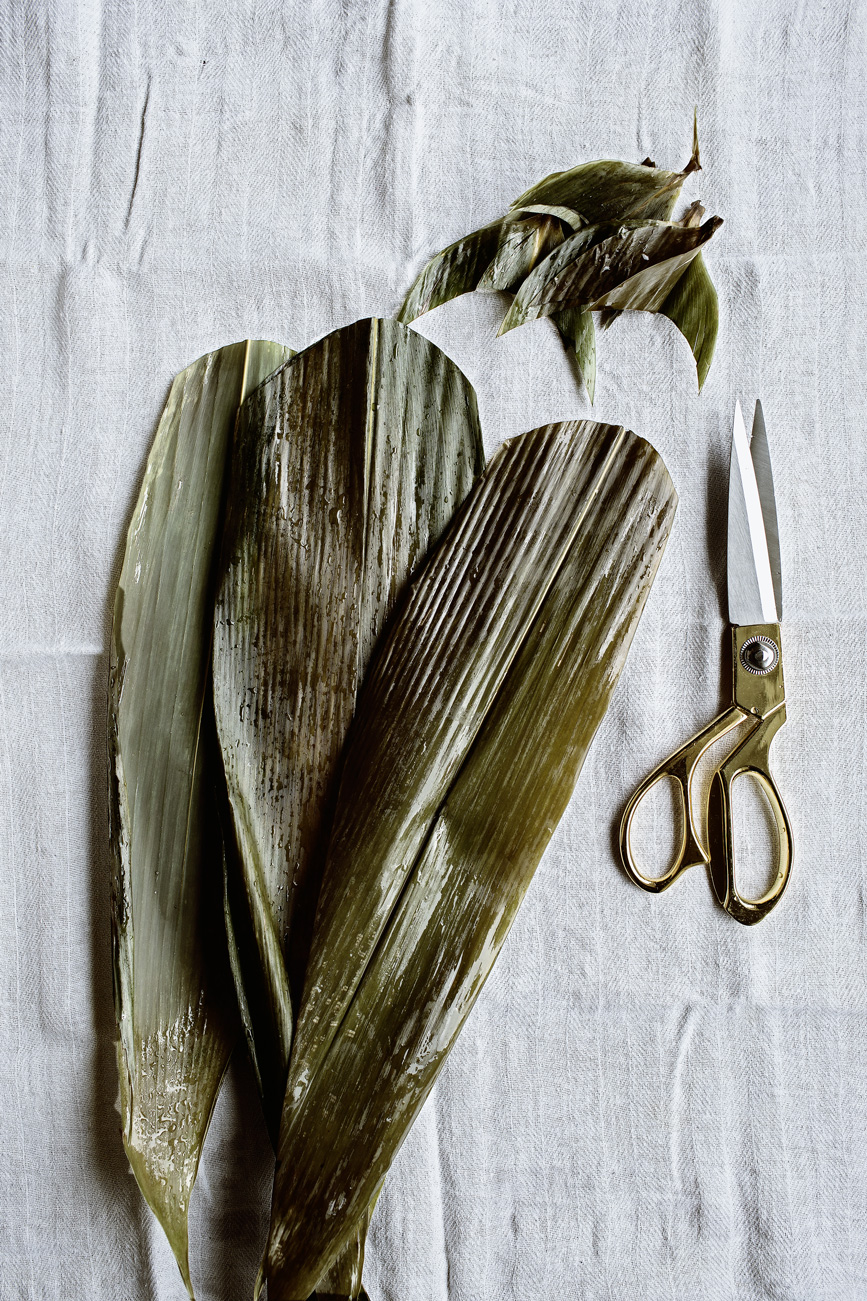 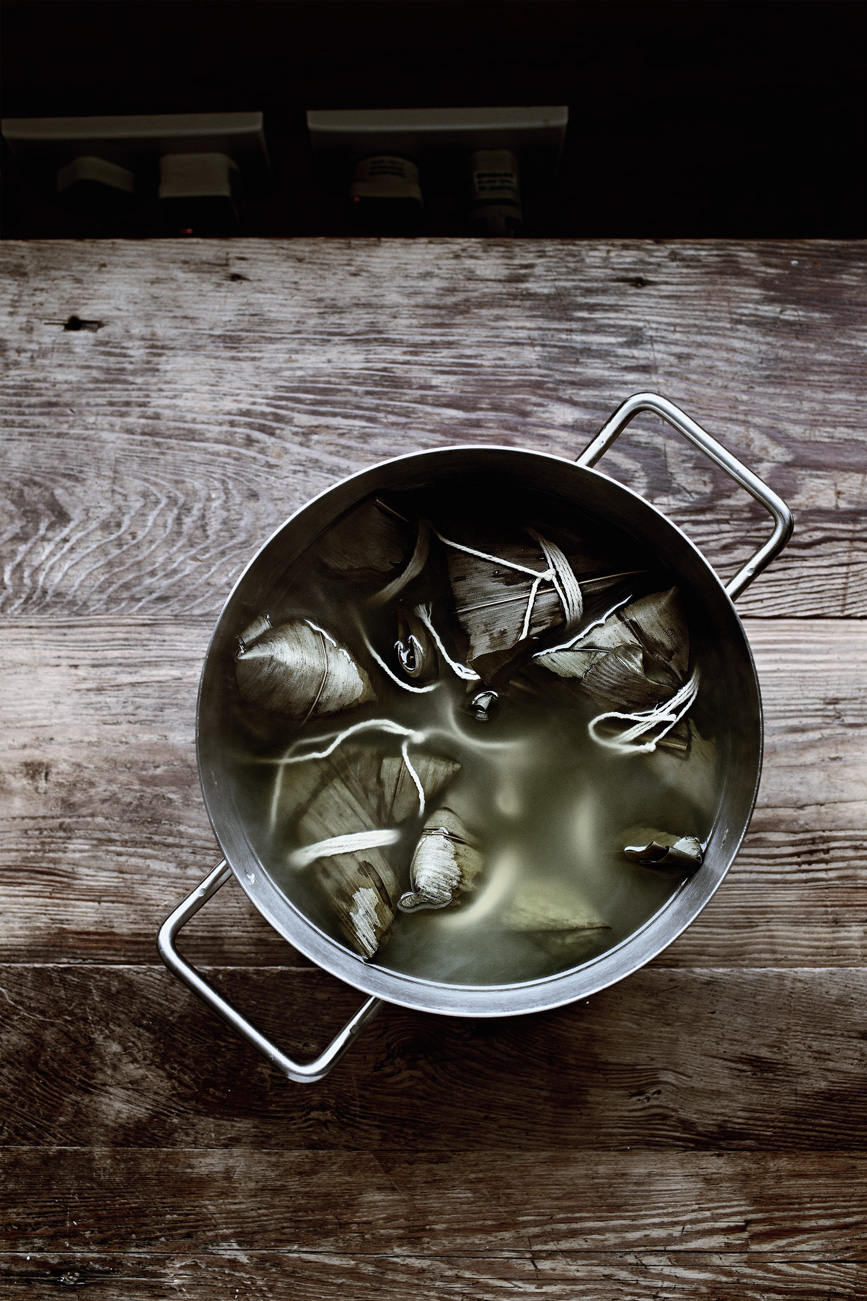 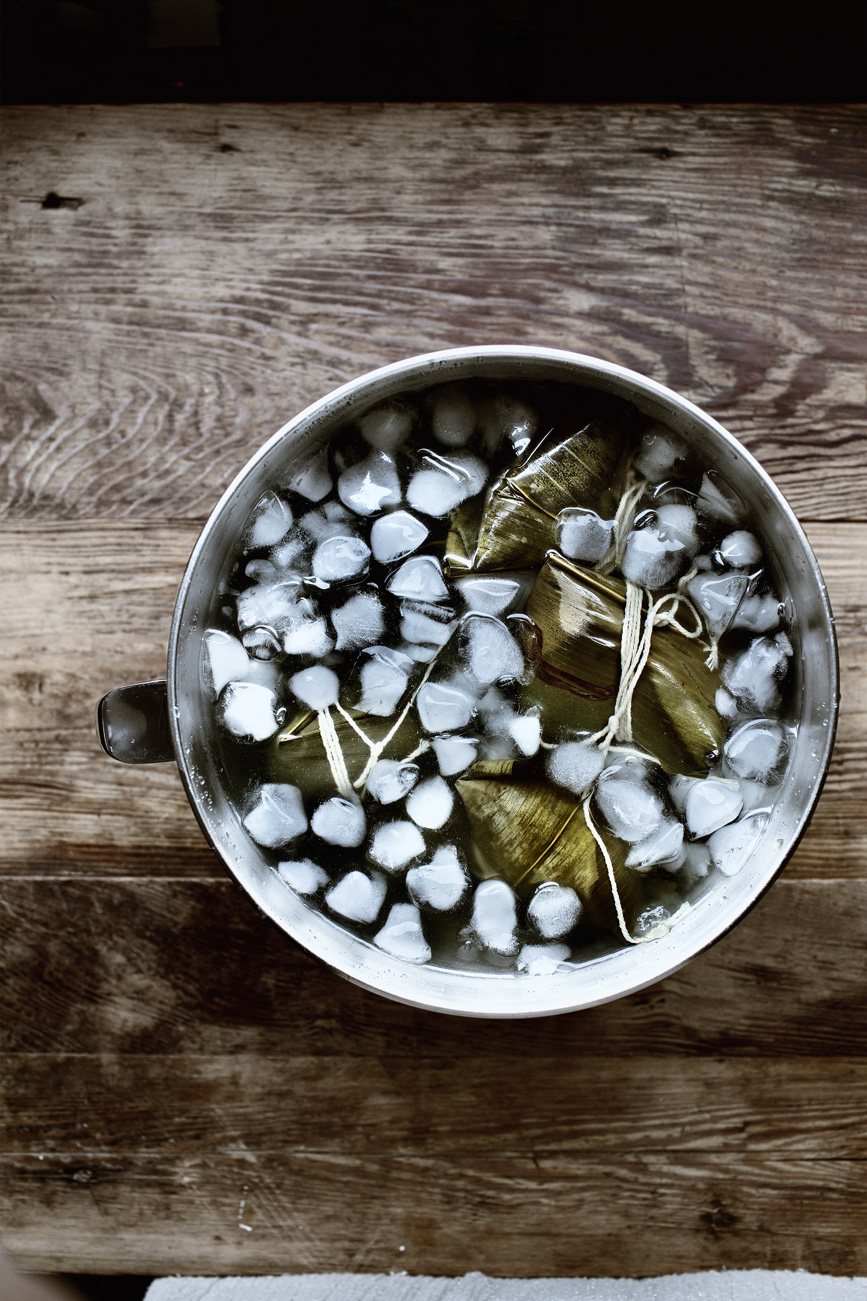 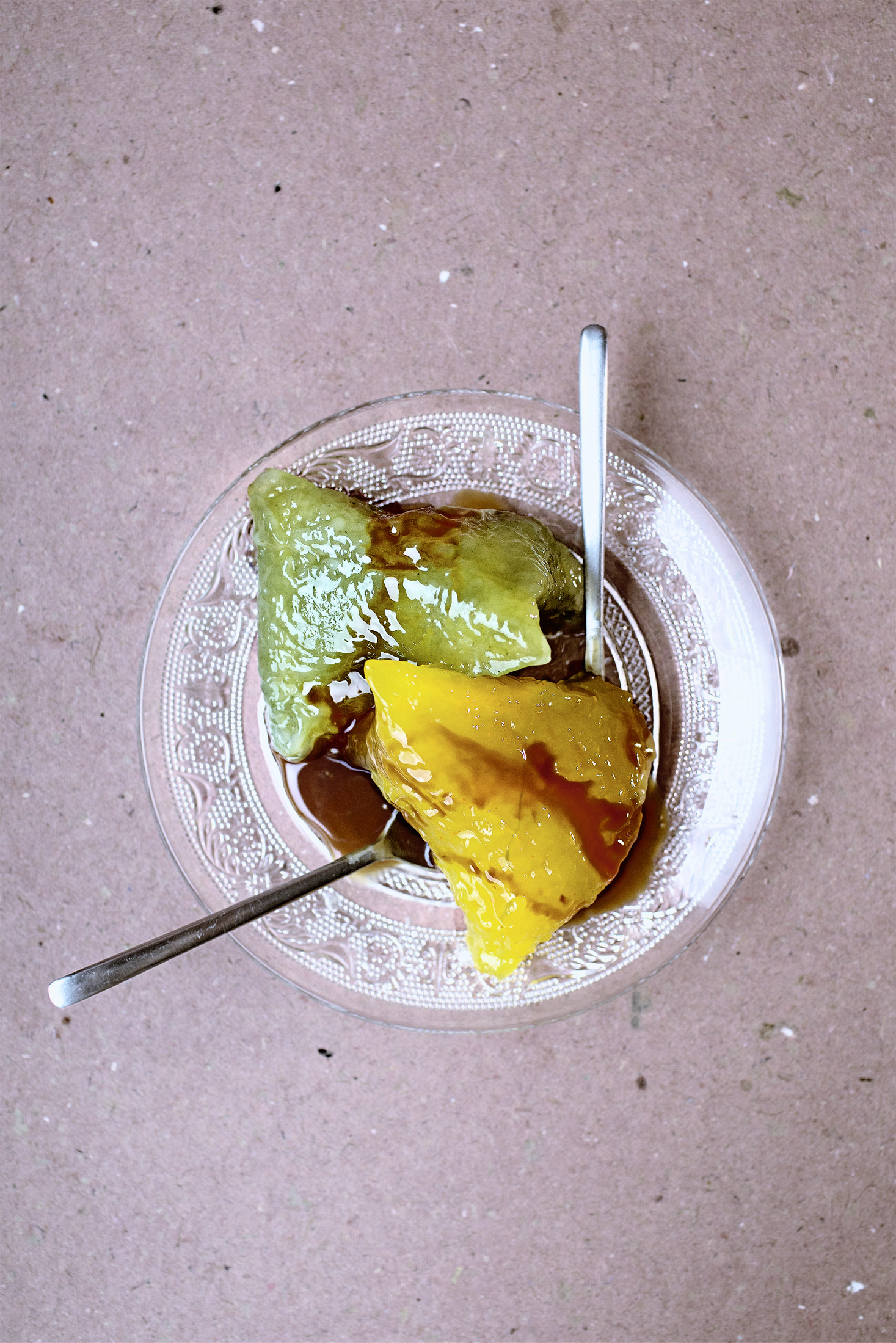 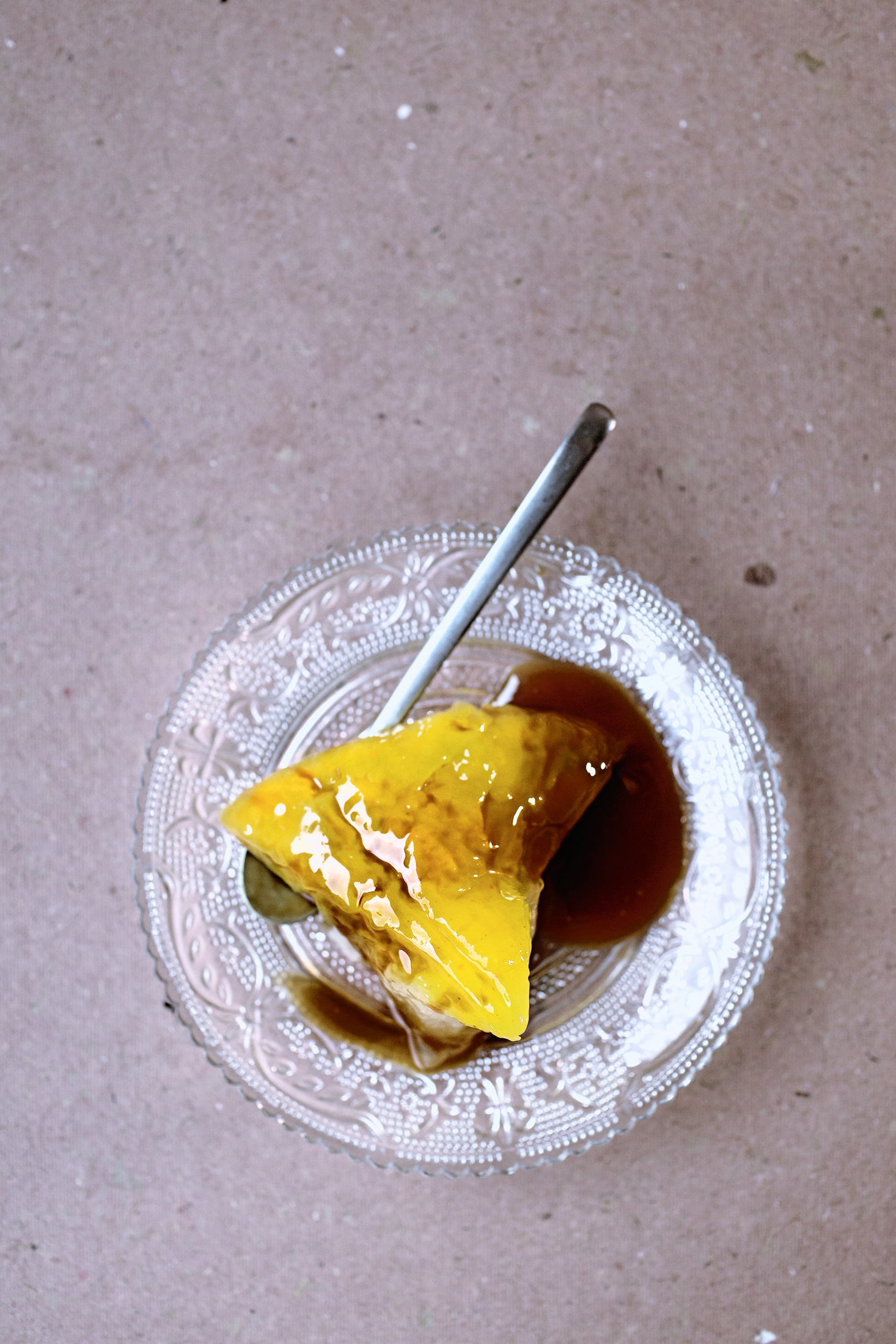 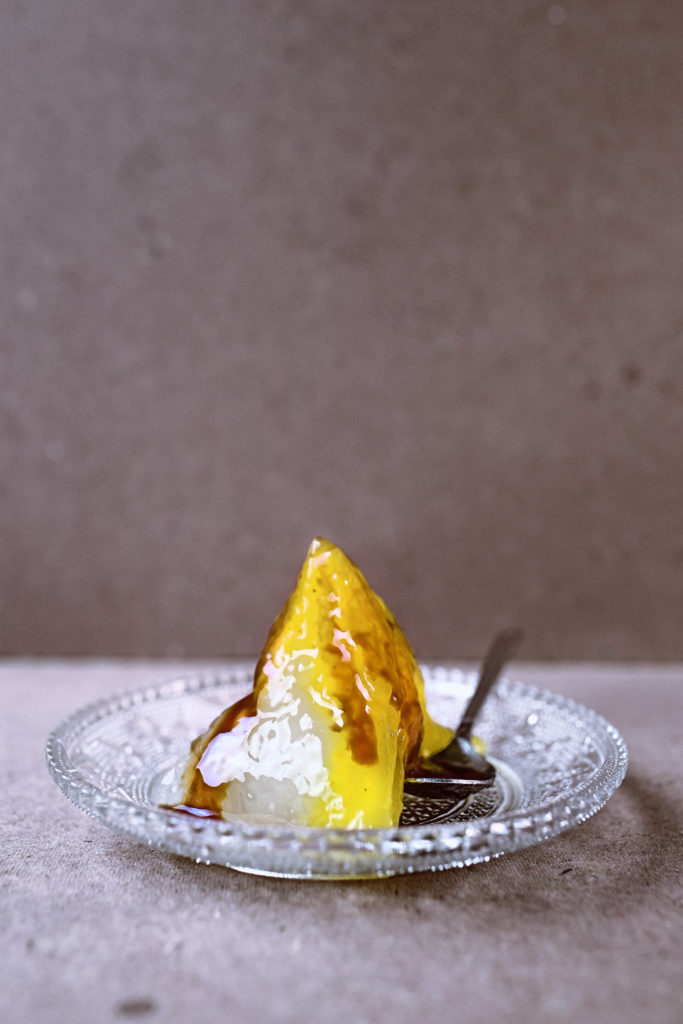 Yield: 8~10 dumplings depending on size

* Me and my husband prefer these dumplings to be plain and unfilled. But if you want, you could certainly stuff them with various fillings, like popular red bean paste, or simply mashed pitted dates. And instead of coconut brown sugar syrup, you could also use simply honey or date syrup.