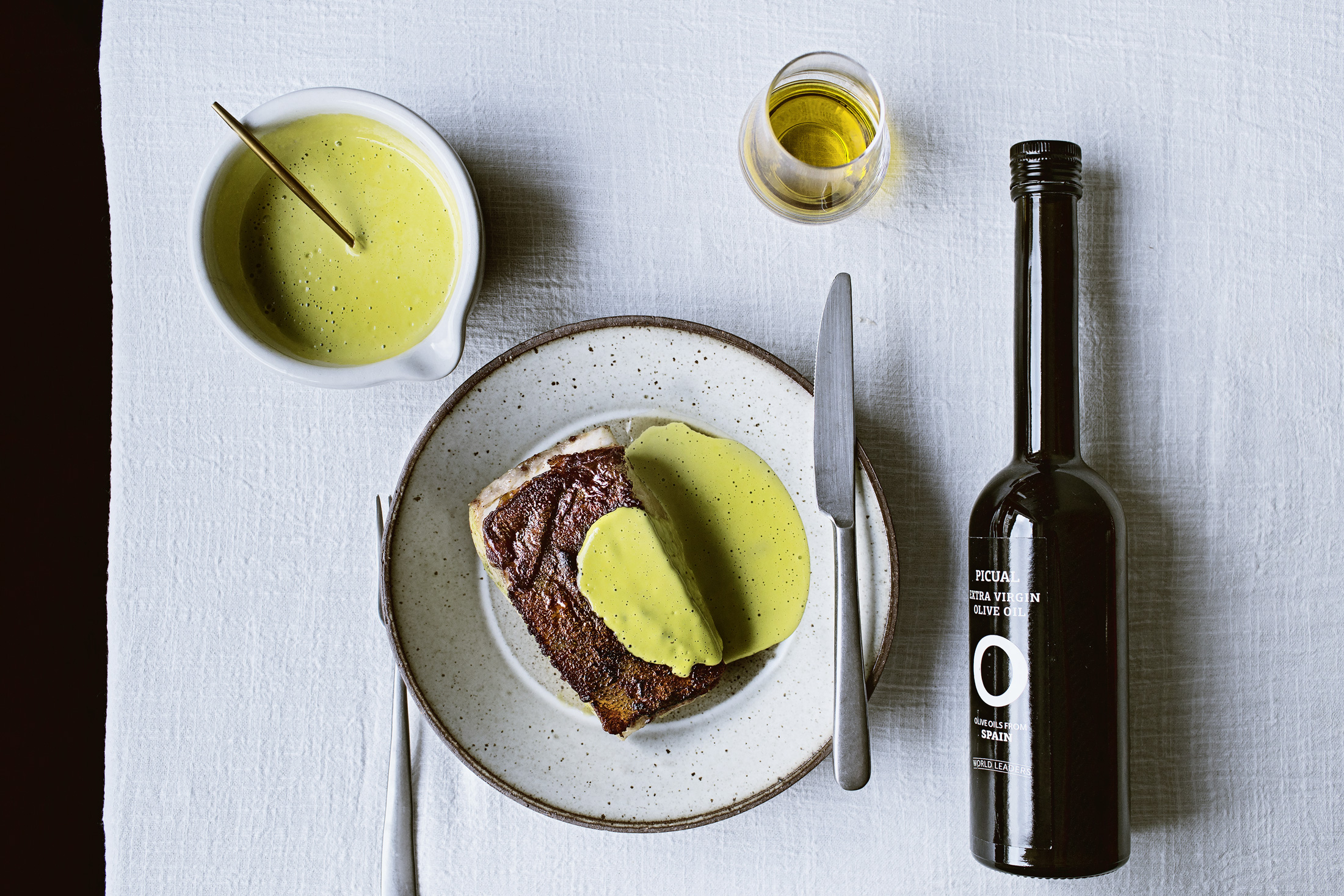 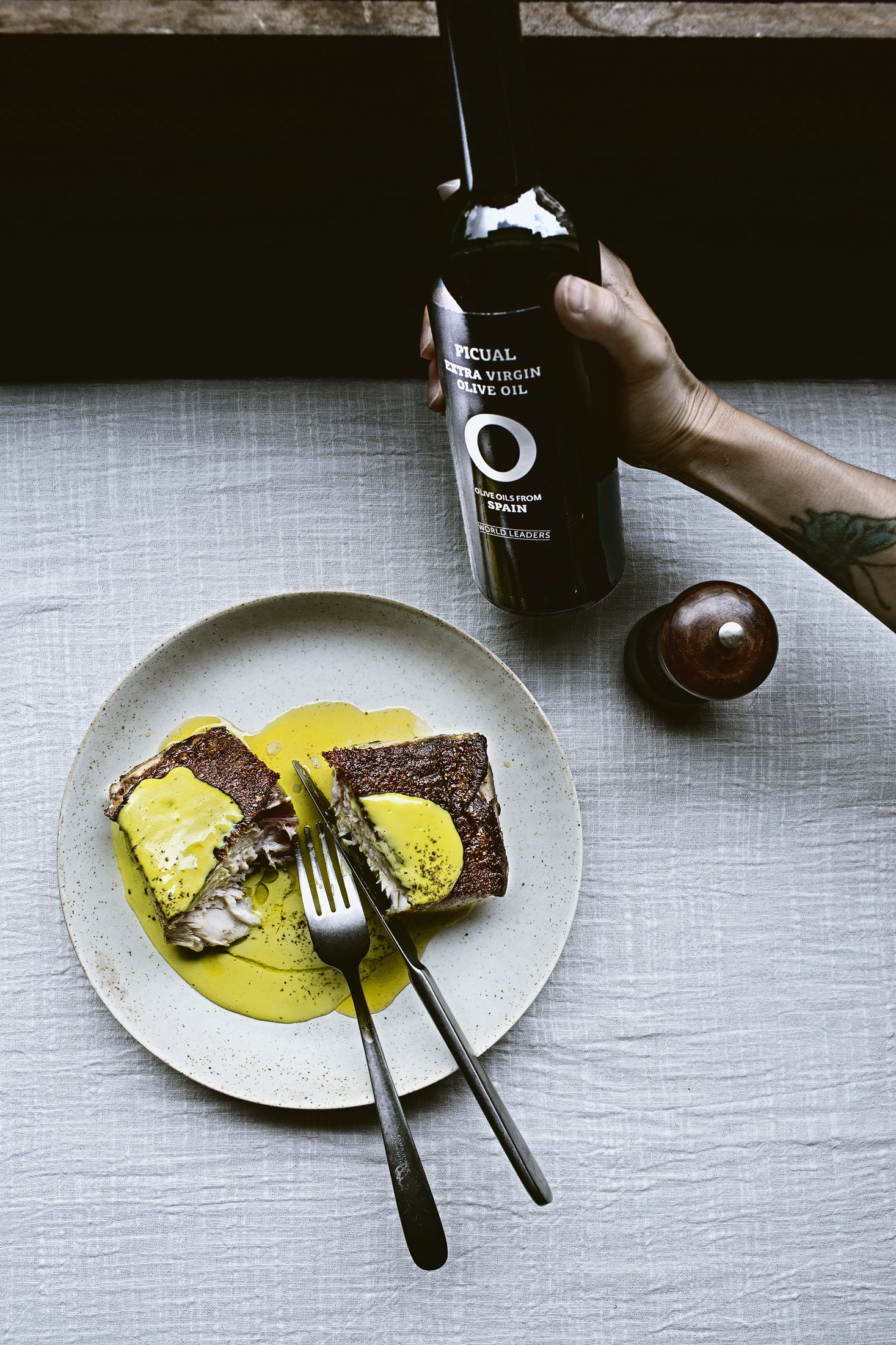 FIERCELY GREEN, GRASSY EXTRA VIRGIN PICUAL OLIVE OIL WITH ALMOST A BITE TO THE TIP OF THE TONGUE, THAT IS EXTRACTED AFTER IT’S BLENDED WITH GREEN CHILI, LIME ZEST, MAKRUT LIM ELEAES, LEMONGRASS AND GINGER, GATHERED AT THE BOTTOM OF A PORCELAIN BOWL LIKE AN EMERAL LAKE OF FLAVORS AND WELL INTENTIONS.

There’s a Chinese saying that goes, “Wisdom resembles stupidity.”  If I didn’t know any better, I would’ve thought it came from Spain.

Spain is, of course, well known as a pioneer for the consistently complicated, decidedly not-stupid molecular cuisines that went on to sweep the rest of the world.  But, in my short yet nonetheless life-changing trip to Madrid a few years ago, that wasn’t what I had taken away from it.  What had really stricken me, left a mark, drilled a hole in my perhaps unsophisticated heart, were the traditional, sometimes almost dumbfounded and simplistic everyday-foods from Spain that surprised me.  A few slices of jamón and nothing else in between a crusty baguette.  An omelet cooked with sliced potatoes.  A tomato rubbed against toasted bread.  Fried peppers.  Things that, on the surface, aren’t even trying.  But if you’re not careful, they might just be enough reasons for you to leave everything behind and move to Spain.

Of all the understated yet remarkable, seemingly careless but in fact highly meticulous morsels of Spanish foods, something, perhaps the most unassuming-sounding of it all, stands out near and dear to my heart.  Canned seafood.

This is by no means the dusty can of sardines in watered down tomato sauce that you ate in one regrettable night of desperation and bad life choices.  We are talking top-of-the-line quality oceanic delicacies: mussels, octopus, baby eels, squids, razor clams, attentively packed with flavored or unflavored extra virgin olive oil inside perfectly sized cans where they are cooked, fused, aged even, bilaterally transforming into something that is infinitely more than the sum of its parts.  With sufficient amount of time that they lay dormant together, the extra virgin olive oil from spain, viscous and fruity, exchanges flavors and even textures with the subjects that it submerges, making the seafood luscious and silky.

So it goes without saying that the minute I was asked to formulate a recipe featuring Olive Oils from Spain, that was where my mind immediately parked.  Well, sort of.

For obvious reasons, running a seafood canning factory inside a home kitchen presents its obstacles.  But what we can do is mimick the process of cooking seafood submerged in extra virgin olive oil inside a vacuum state, aka, sous vide.  Before I lose your attention, I’d like to point out that, quite the contrary from general beliefs, when it comes to sous vide, A) you do not need a vacuum machine, nor a sous vide machine to sous vide at home, and B) the process is actually significantly simpler and easier than most of the other stuff you cook home.  Say pancakes.  I, personally, rather do five sous vide meals than one batch of pancakes.

Because look, you stuff your subjects into a zip-lock bag.  Close the bag while eliminating as much air inside as humanly possible.  Dunk the bag into a large pot of warm water that mostly sustains itself at a constant temperature over the lowest flame setting.  And, well, that’s pretty much it.  Fifty minutes later, the unimpressive thing you walked away from without doing much else has turned into something that is now surreally fantastic.  It’s a method I often deploy against ingredients that are persistently keen on ending up as a pile of cardboards or wood chips, say chicken breasts and fish.

So, tell me how this sounds.  On one side, we have a fiercely green, grassy extra virgin Picual olive oil from Spain, with almost a bite to the tip of the tongue, that is further extracted after it’s blended with green chili, scallions, lime zest, makrut lime leaves, lemongrass, ginger and cilantro, gathered at the bottom of a porcelain bowl like an emerald lake of flavors and well intentions.  On the other, we have a steak-like hunk of fatty halibut fillet.

Let the fateful merger of these two enterprises collide, settle, left undisturbed inside an airless bag, then send them off into a physical transformation inside a warm, silent, almost meditative bath.  The translucent flesh of the halibut whitens and tightens to the perfectly calculated and controlled state of being opulent and supple, where a small amount of its savory juice seeps into the Spanish olive oil, each releasing and absorbing the essence of the other, born anew.

At this point the duo is as ready to be served as any.  But I couldn’t resist to impose a little element of crispiness on the fish by finishing it in a hot skillet, and to emulsify the olive oil and liquid with yolk and garlics and turning it into a loose, mayonnaise-like sauce.

For more information on Olives Oils from Spain, please visit www.oliveoilsfromspain.org to learn about their quality olive oils. 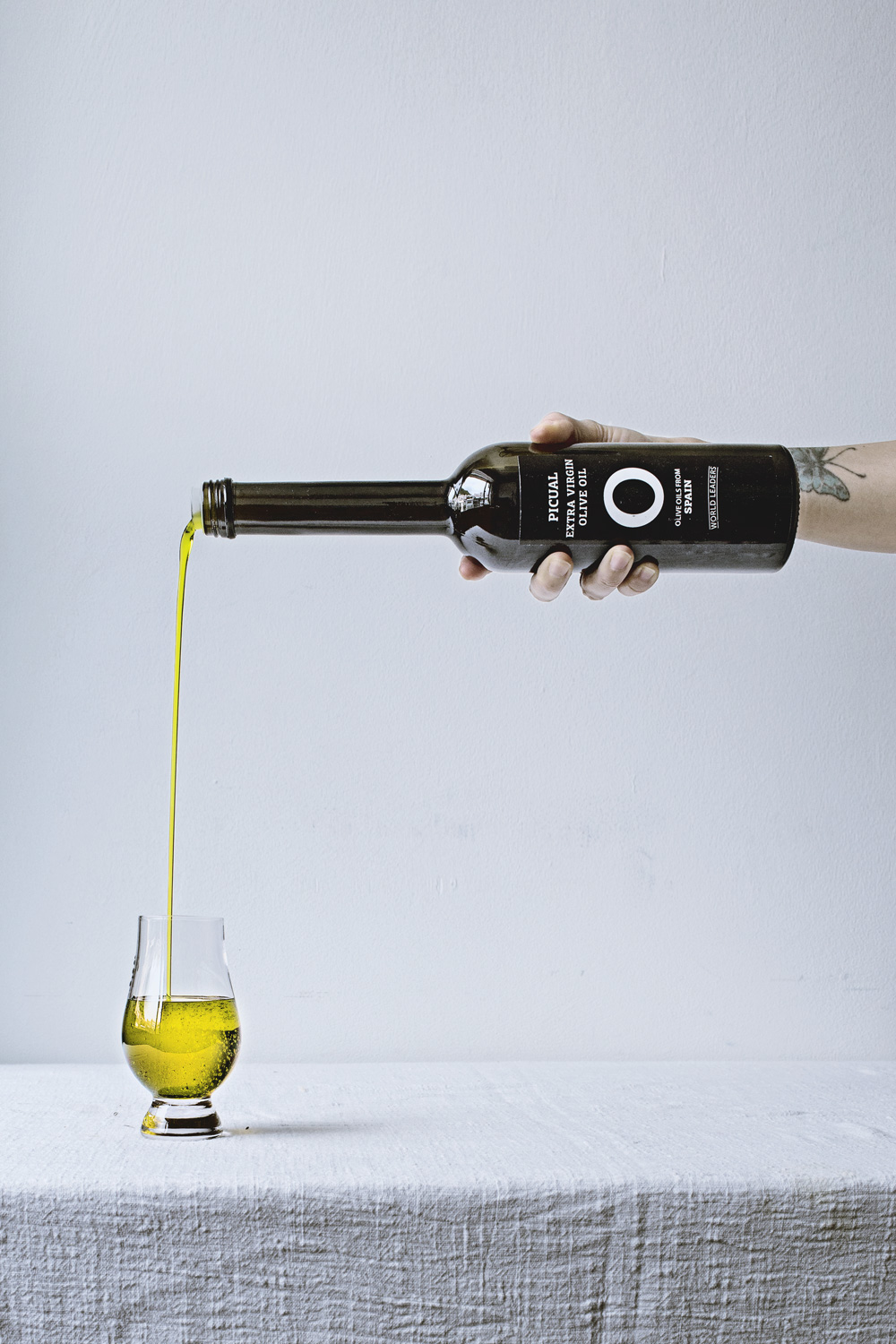 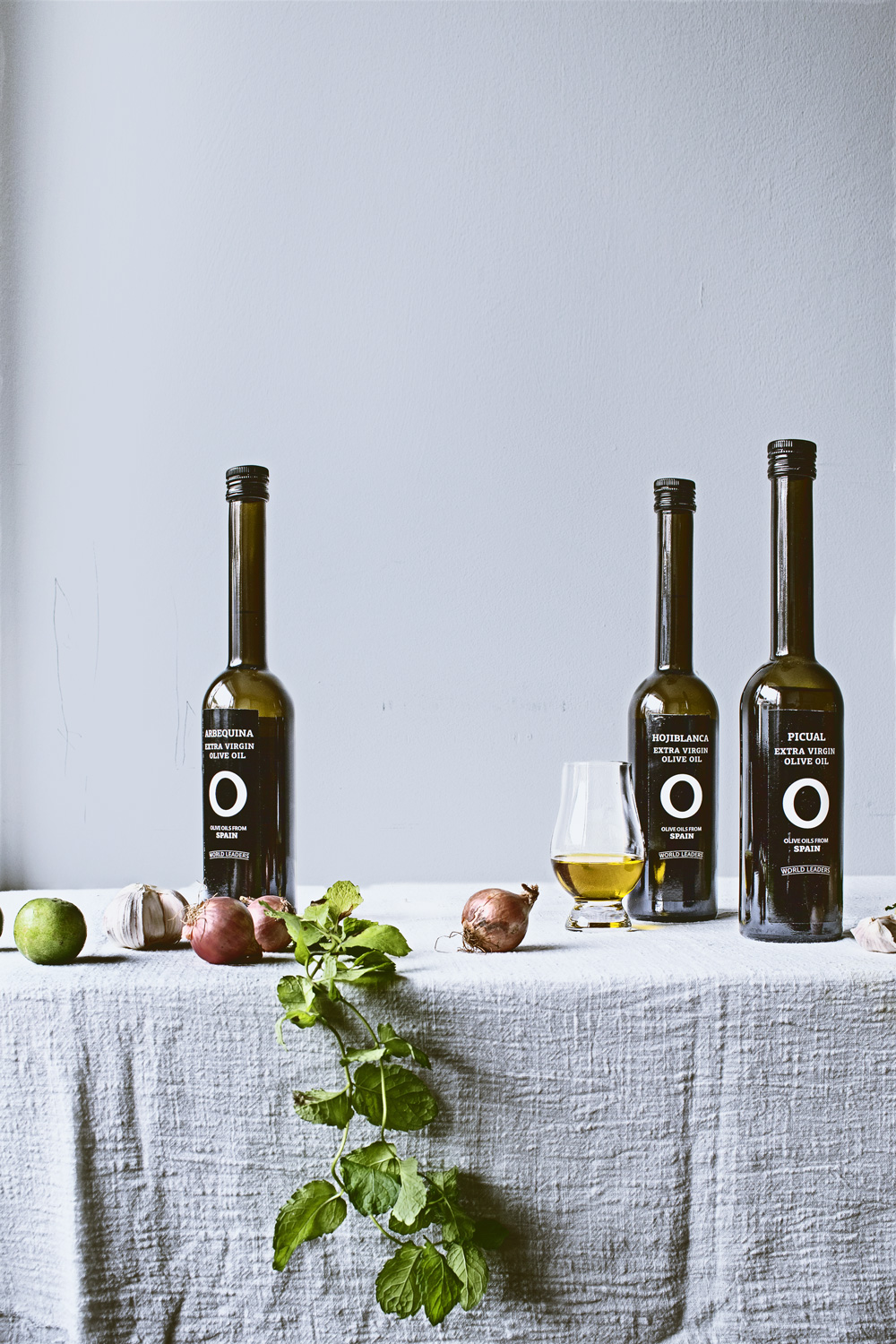 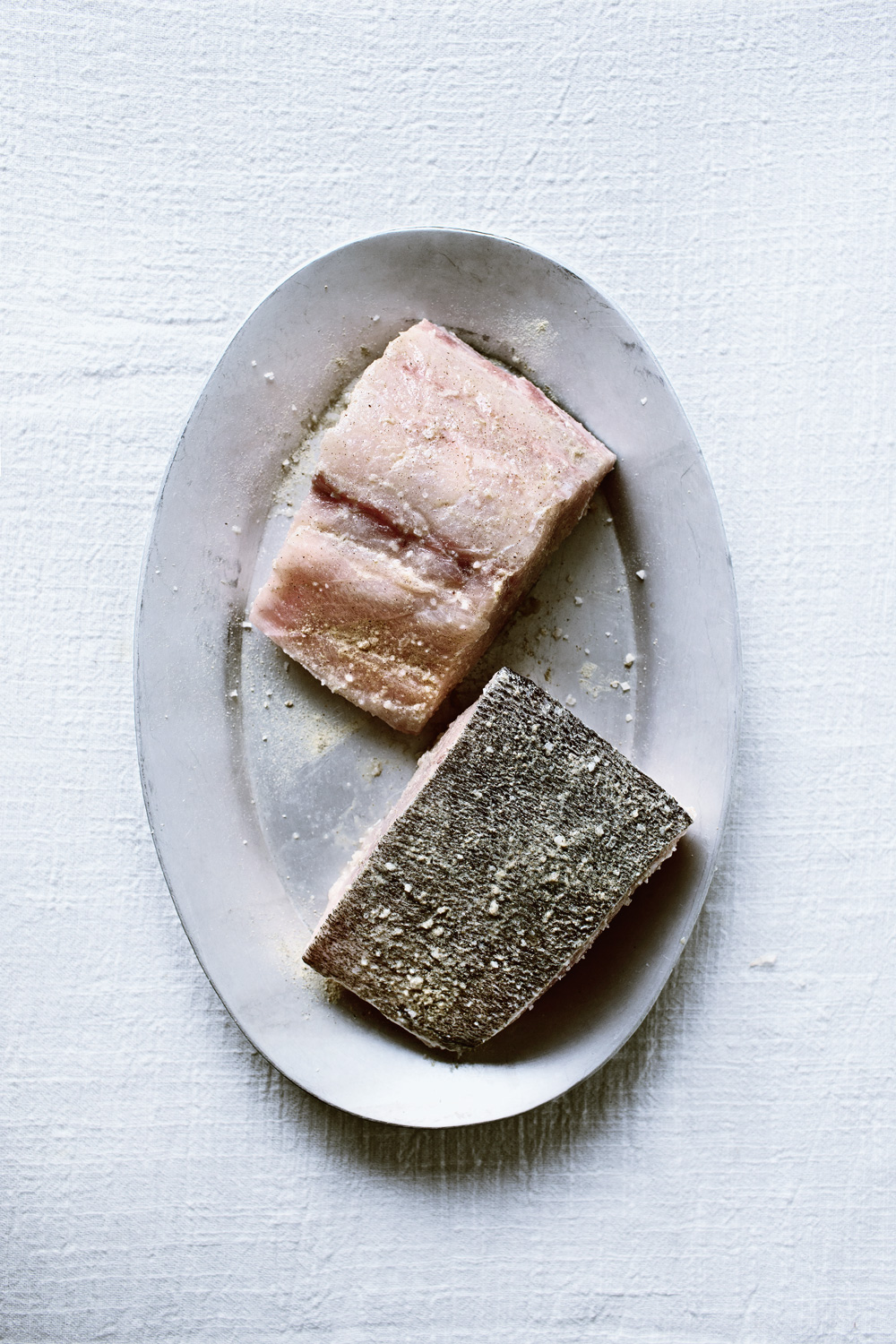 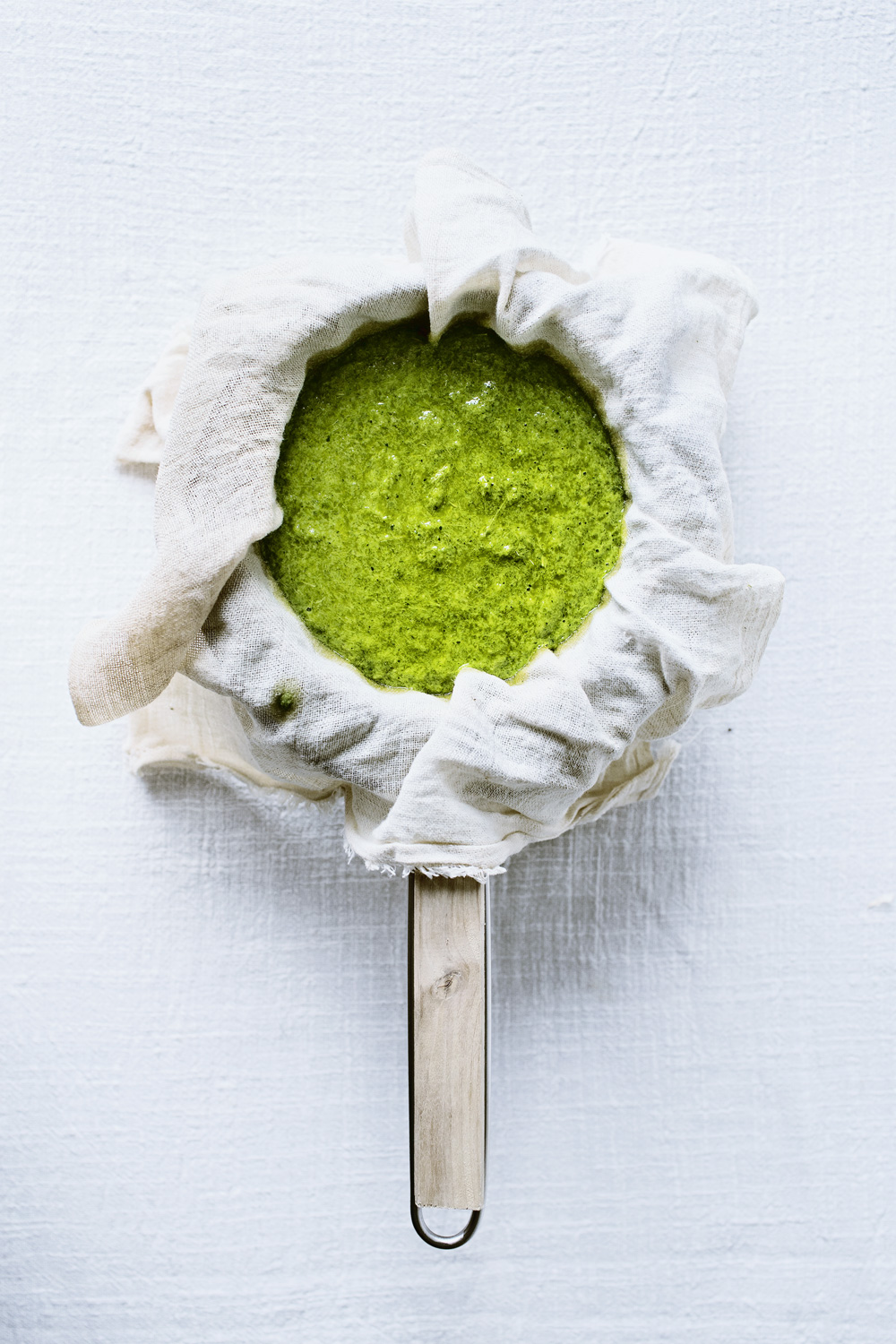 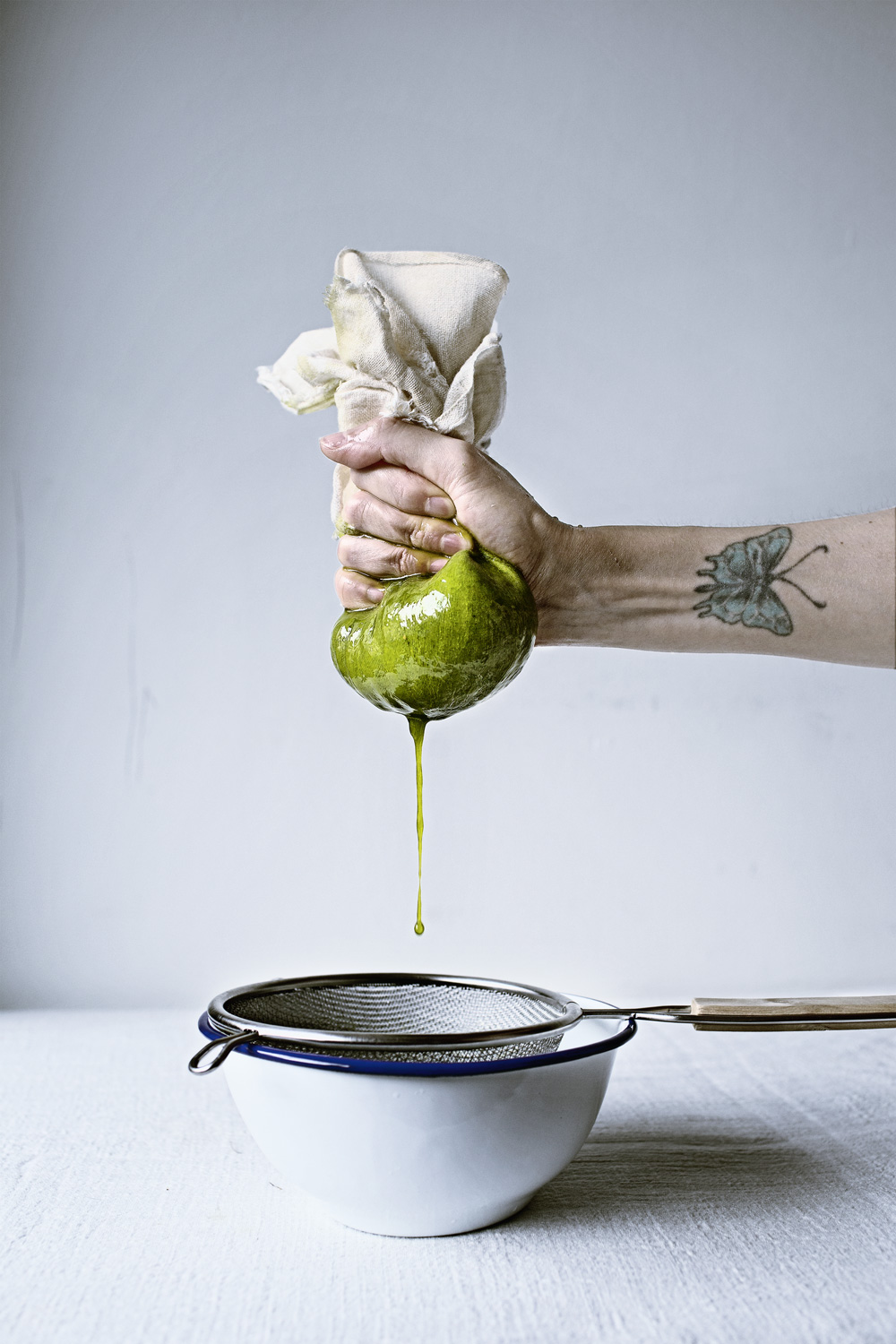 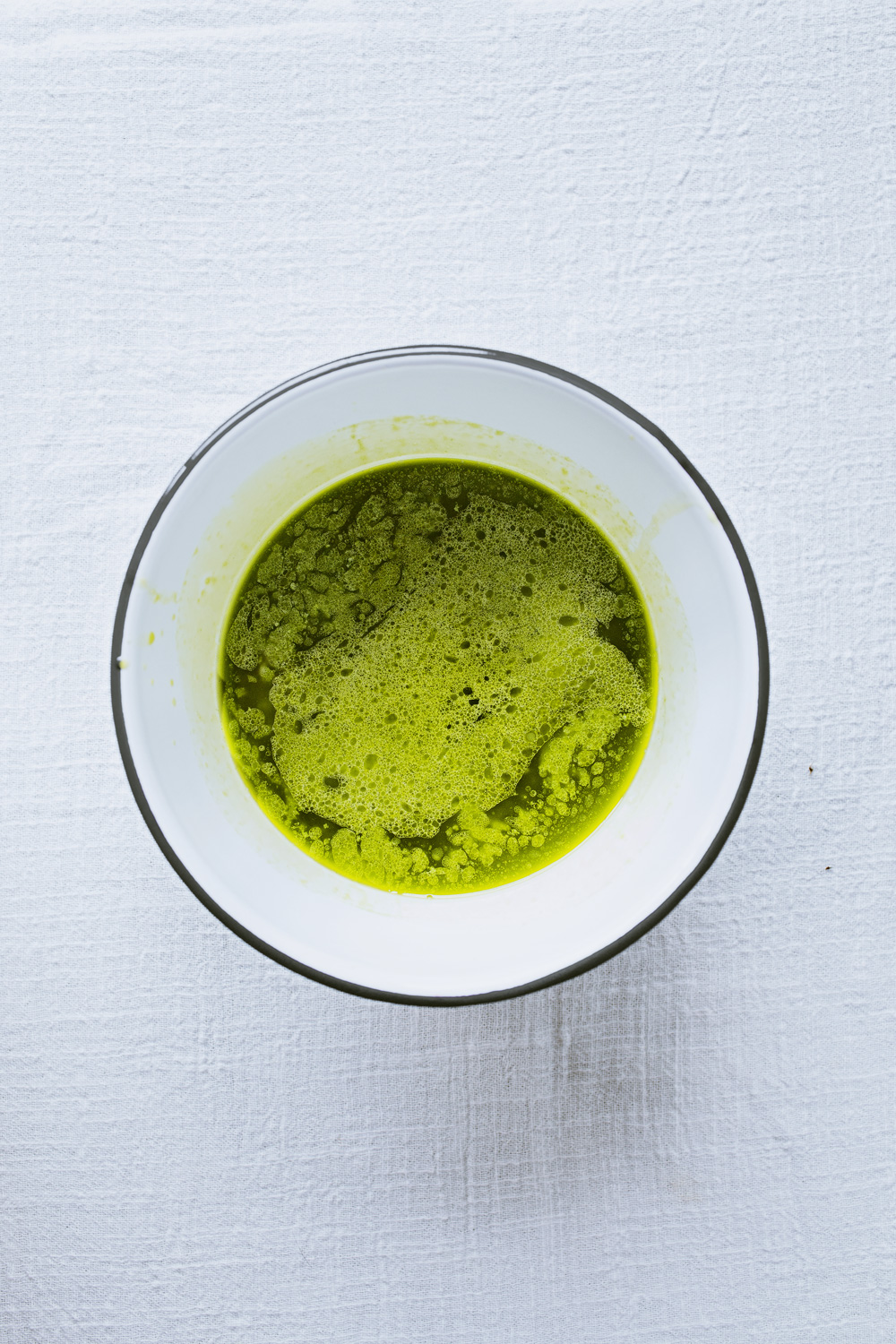 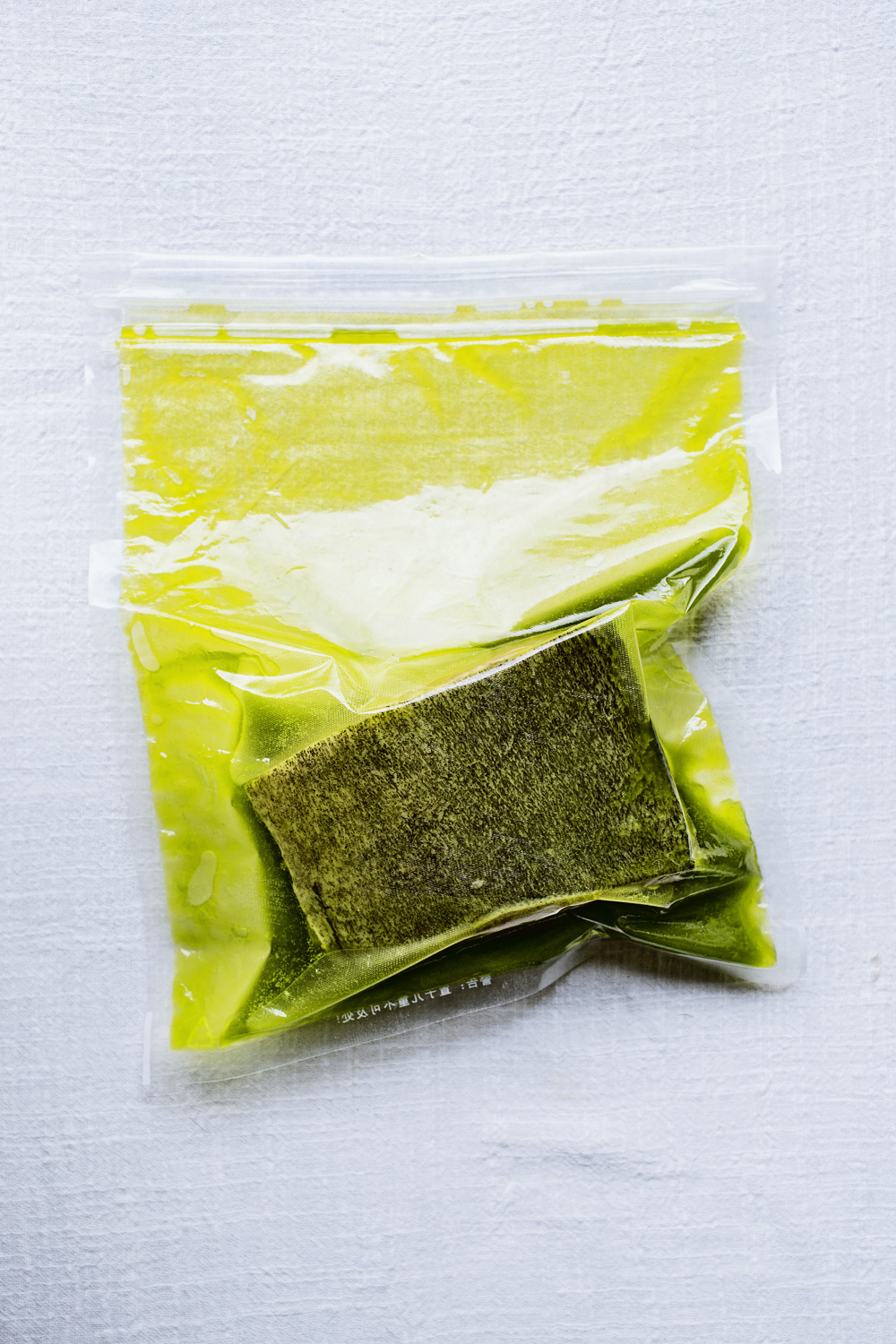 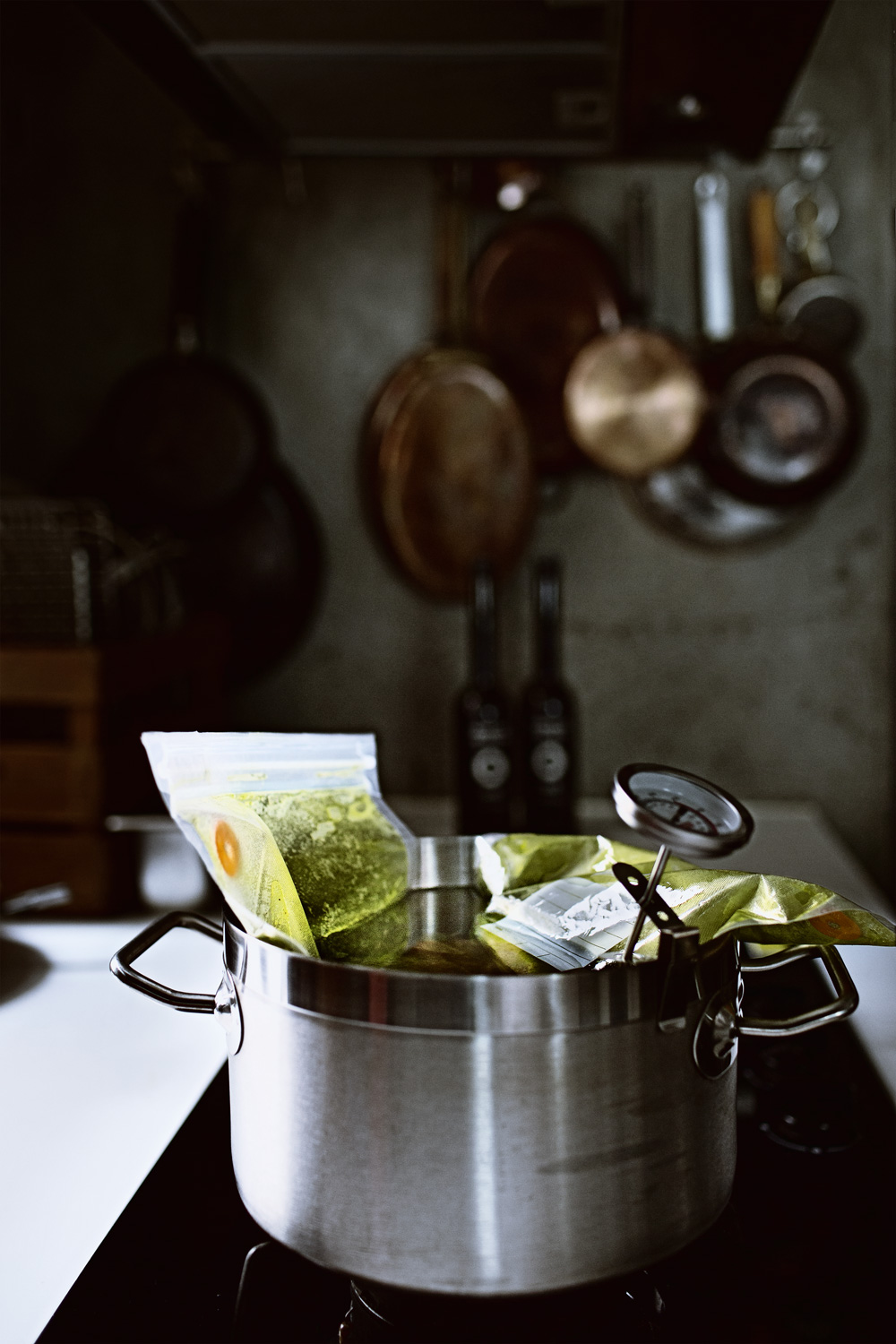 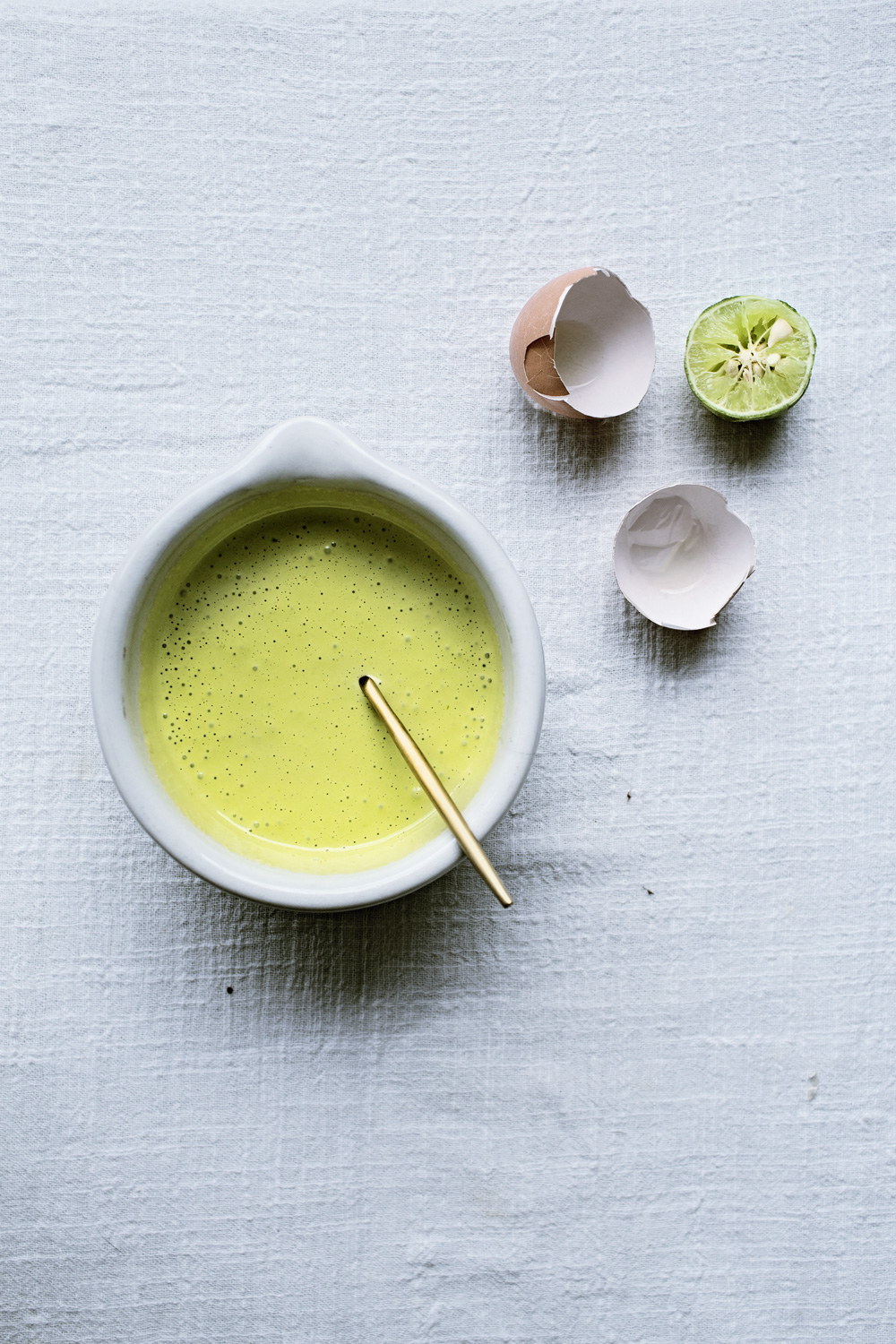 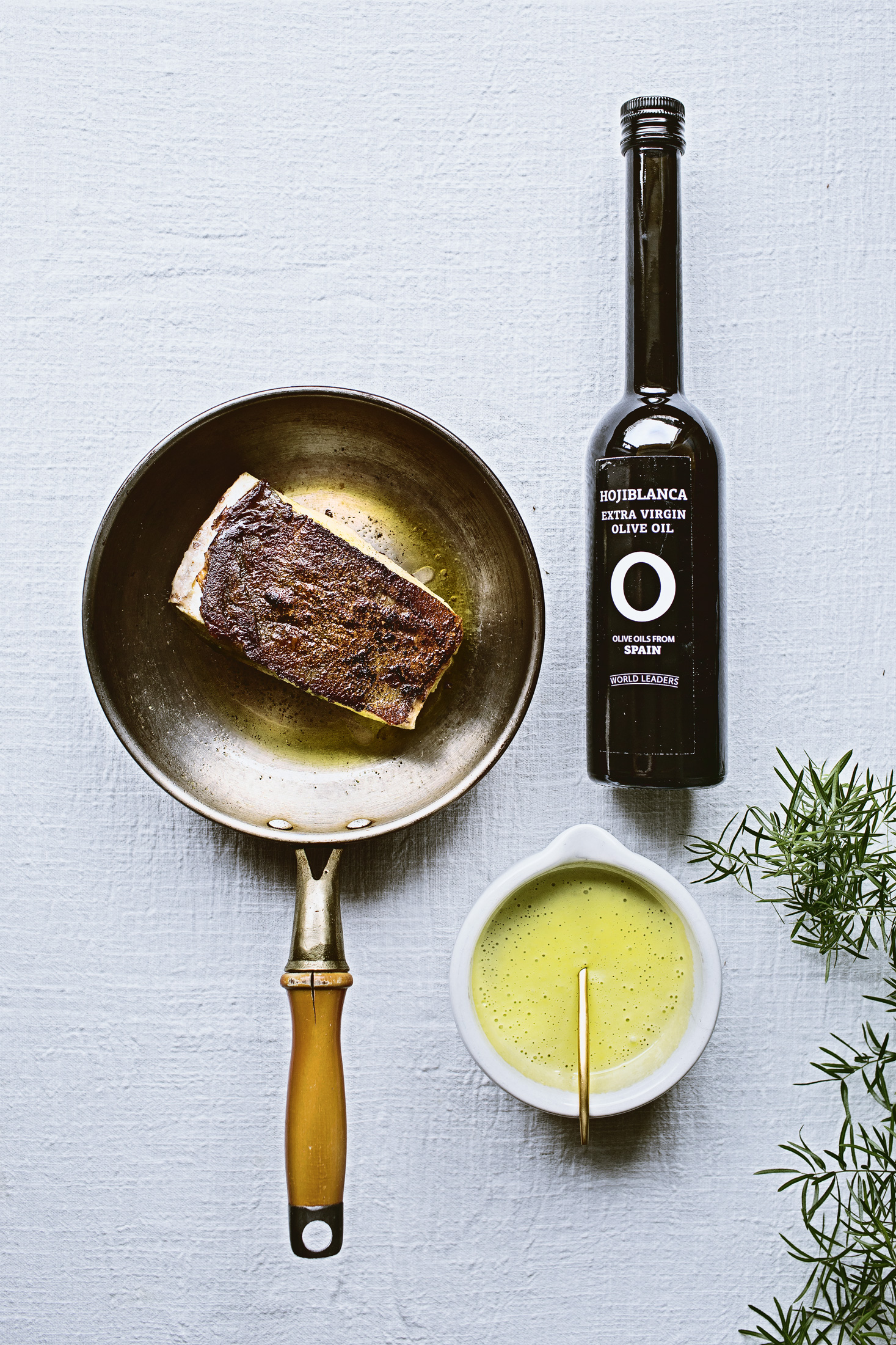 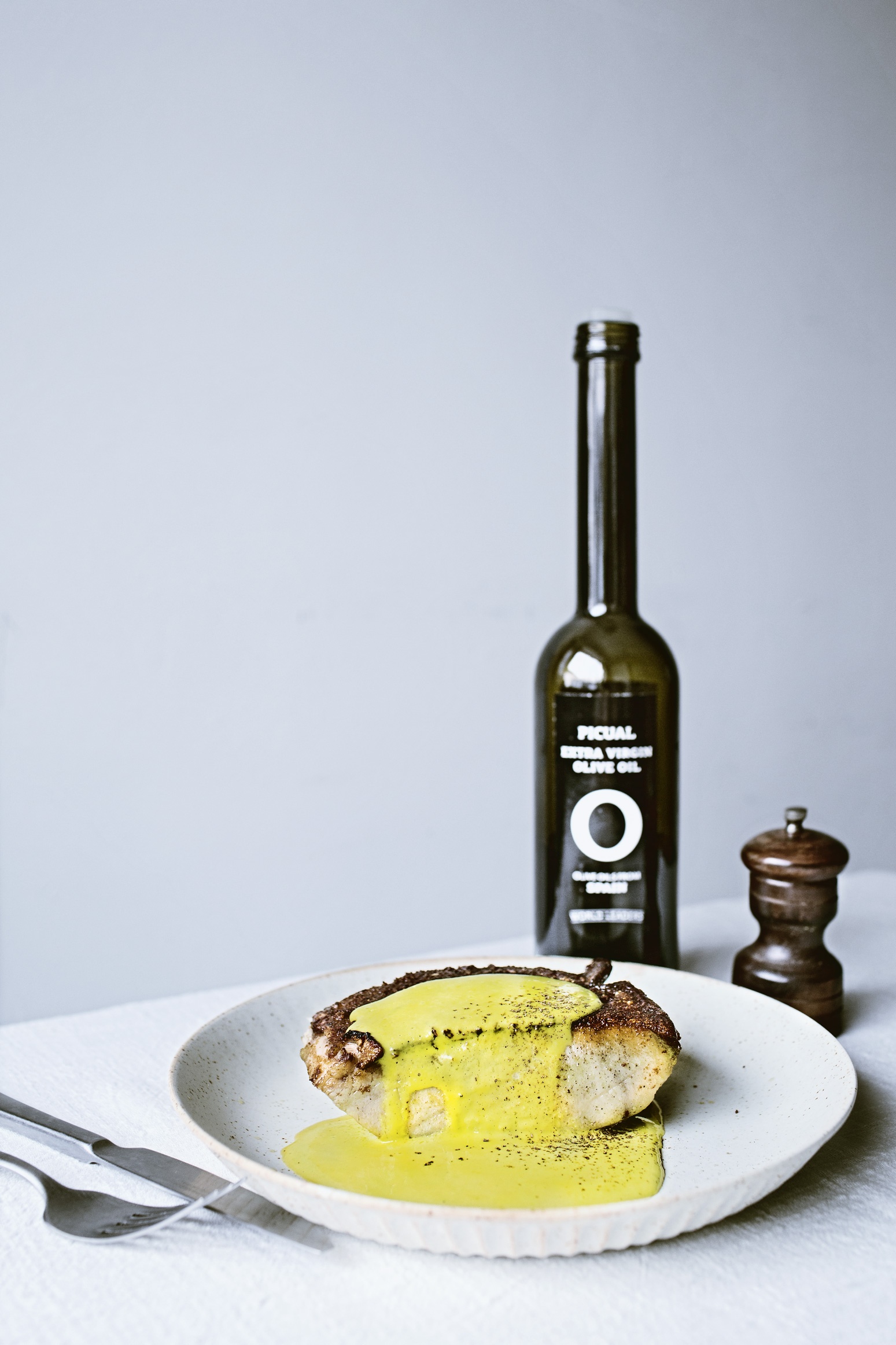 * Choose fishes that have a fatty but firm flesh, with the thickest part that is at least 1 1/2”~2” thick. This would mean the mid-section on large fishes such as halibut, large striped bass, cod, sword fish, salmon and etc. “Fillet” would mean that the meat is removed from the central spine and major bones (whereas a “steak” will include the bones). You can choose between skin-on or skinless, depending on your preference.

** If you can’t stand cilantro, note that you won’t really be able to taste a strong cilantro presence in this recipe. But if you want, you can substitute cilantro with tarragon, basil, or other types of green leafy herbs you prefer.