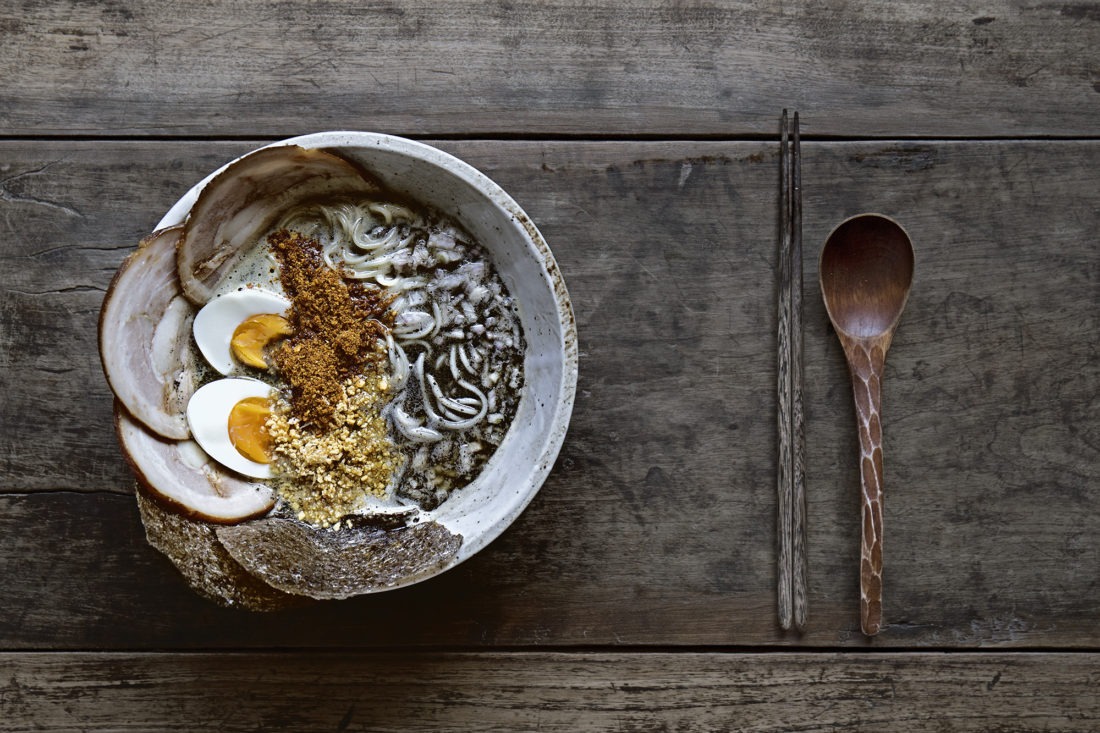 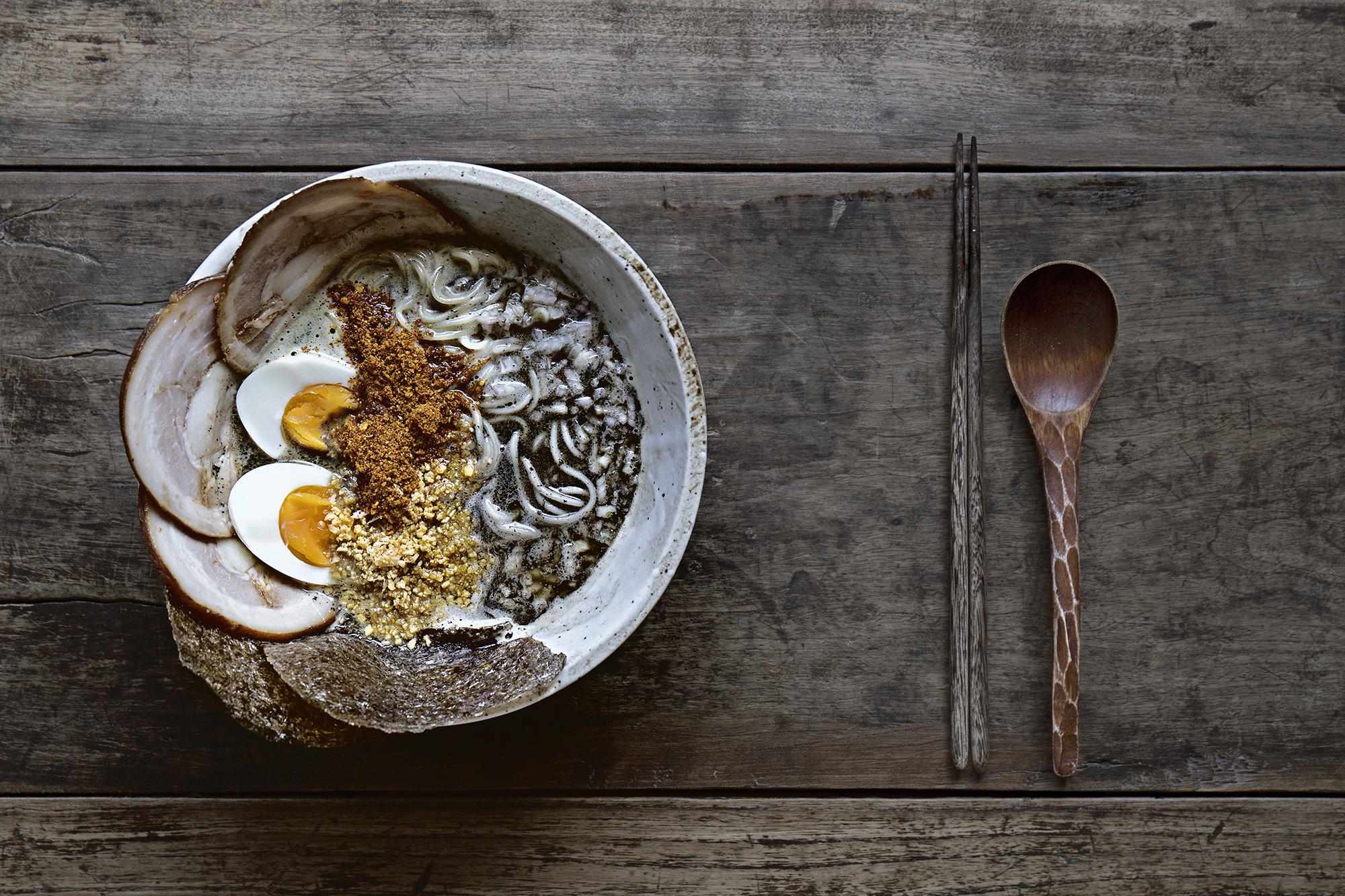 “A bowl of slurpable crude oil, but in the most edible and delicious way. “

WHAT:  Welcome back my utterly self-serving recipe series I would like to call – The Book Bait, a shameless campaign to draw out all cookbook-hunters to our upcoming cookbook, The Art of Escapism Cooking – A Survival Story.  These are brand new recipes that are not in the cookbook but however, in order to make them, you will need one or more essential component from the book to complete which, yes, is yet to be published on October 15, 2019.  And yes, I am still doing that to you to sell books.

WHY:  It isn’t without brag when I say that there is an entire chapter in our cookbook enshrined to the universal religion of noodle-slurping and ten of which are full-blown, no bullshit, the milky broth, the umami, the toppings, the thick and the deep, the sacred and the indecent, the full spectrum of the unapologetic and delicious absurdity that is, Japanese-style ramen.  Yes, I went there, the whole nine yards.  And I feel that I could still go further.  Because in Japan’s traditionally defined food culture, this rare and liberal, democratic even, arena of ramen creation has proven itself unbound by conventions and time and time again, reinvents itself in the most surprisingly pleasurable way.  So no, there’s no such thing as too many ramen recipes.  But too many ramen recipes in a cookbook that is not all about ramen?  Okay, that’s a thing.  So think of this as an extension to my cookbook ramen spree.

HOW:  This particular recipe is inspired and adapted from a tiny ramen shop in Hong Kong called Ramen Nagi.  Its version of squid ink ramen, of which they call the Black King, is a missile of maximized flavors and color, a thick jet black pool of black things on top of, well, more black things, a bowl of slurpable crude oil but in the most edible and delicious way.  But the intensity, both of color and flavors, comes predominantly from black sesame paste that, even though an effective sensational booster, is quite overpowering for the elusiveness and subtleness of squid ink to come through.  So here I have opted to remove the black sesame paste entirely, replaced by the milder toasted sesame oil in a squid ink paste that uses the mighty porkiness of Italian guanciale as a foundation.  Then the indisputable presence of pork belly roll they call charsiu, simmered in a soy sauce bath warmed with star anise and cinnamon, and the jam-like egg yolk, the fried garlic powder, the toasted seaweed, the quintessential spanker of a house-blend chili powder, they are all here.

But no amount of supporting role could deliver a bowl of ramen without the core, the mother, the matriarch that is the emulsified thus milky bone broth to bind them all in a harmonious lagoon, as well as a ramen reasoning that conjures all the harvestable umami from natural ingredients this sweet mother of earth has to give, to bring a bowl of ramen to life.  Well, that, you know where to find them. 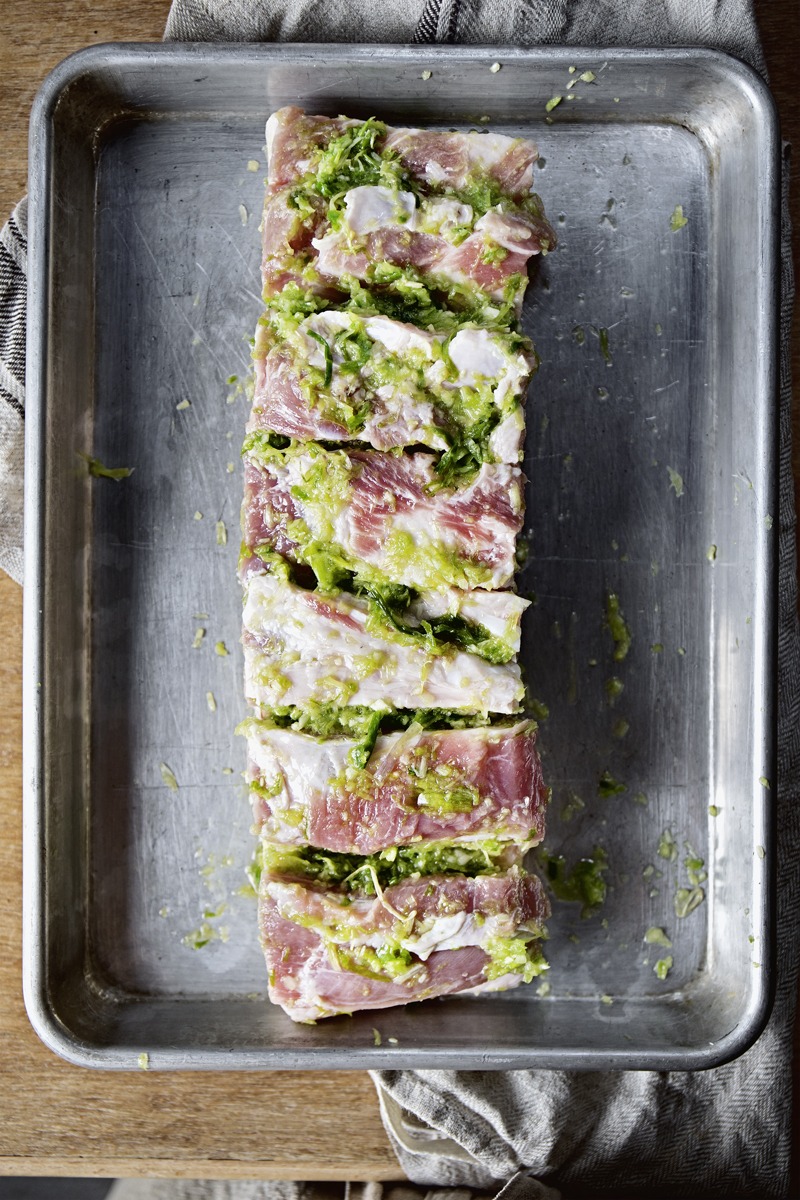 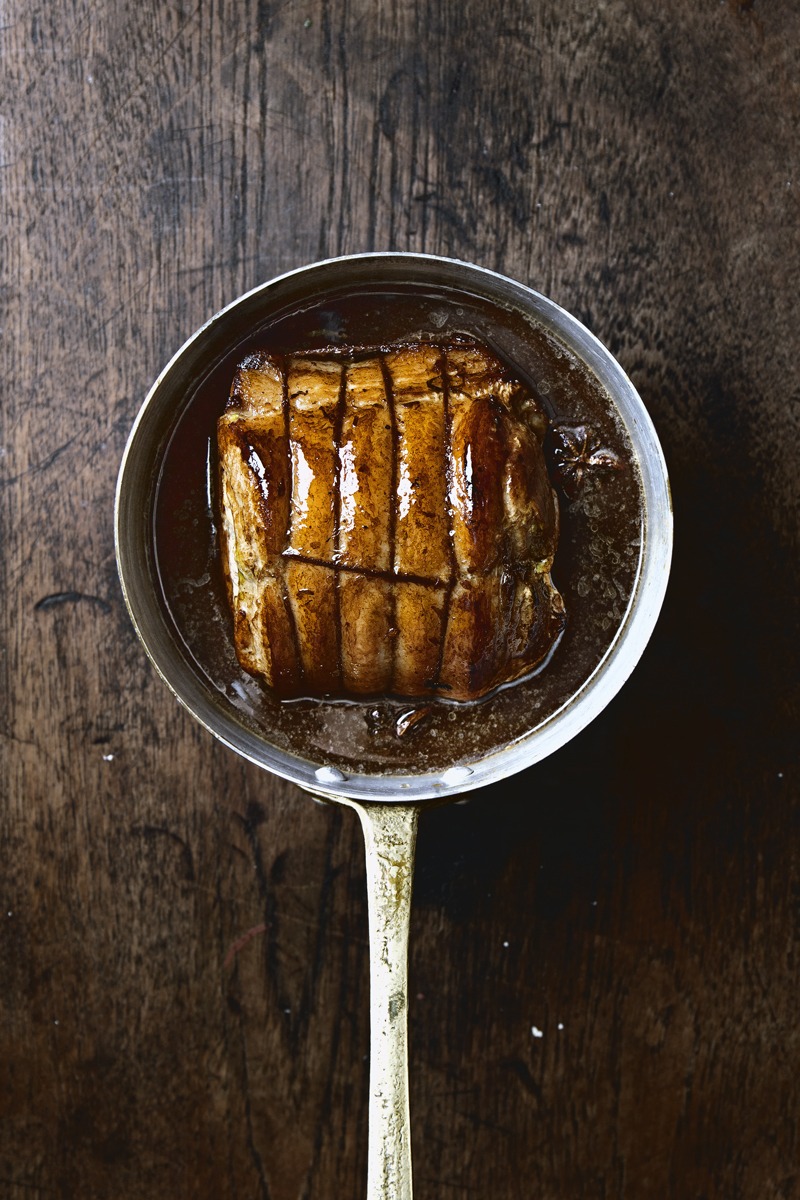 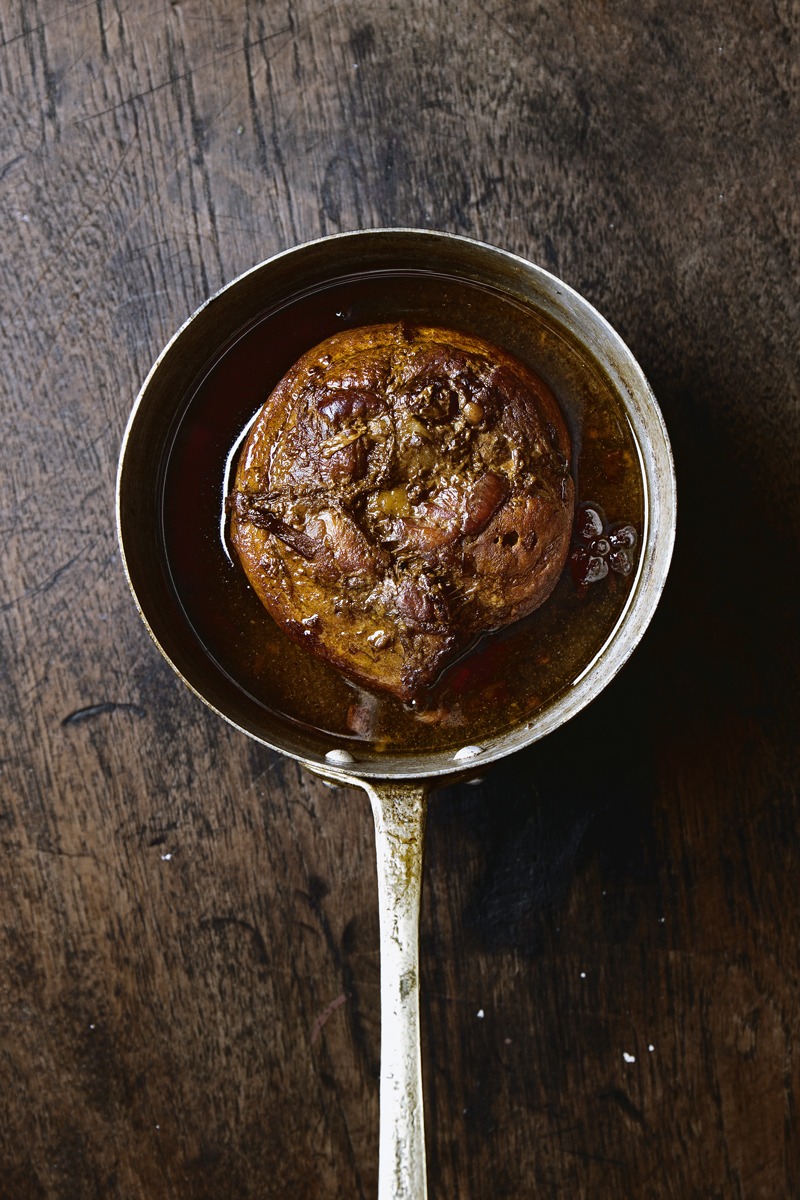 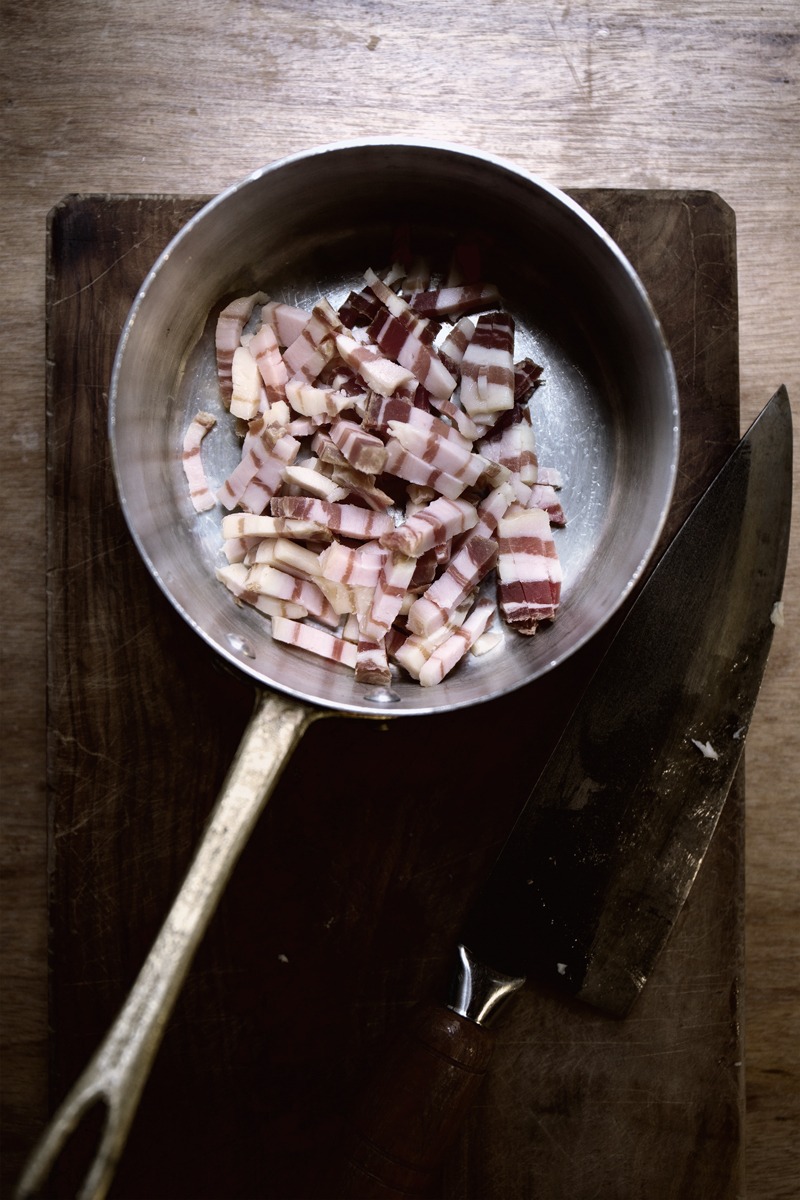 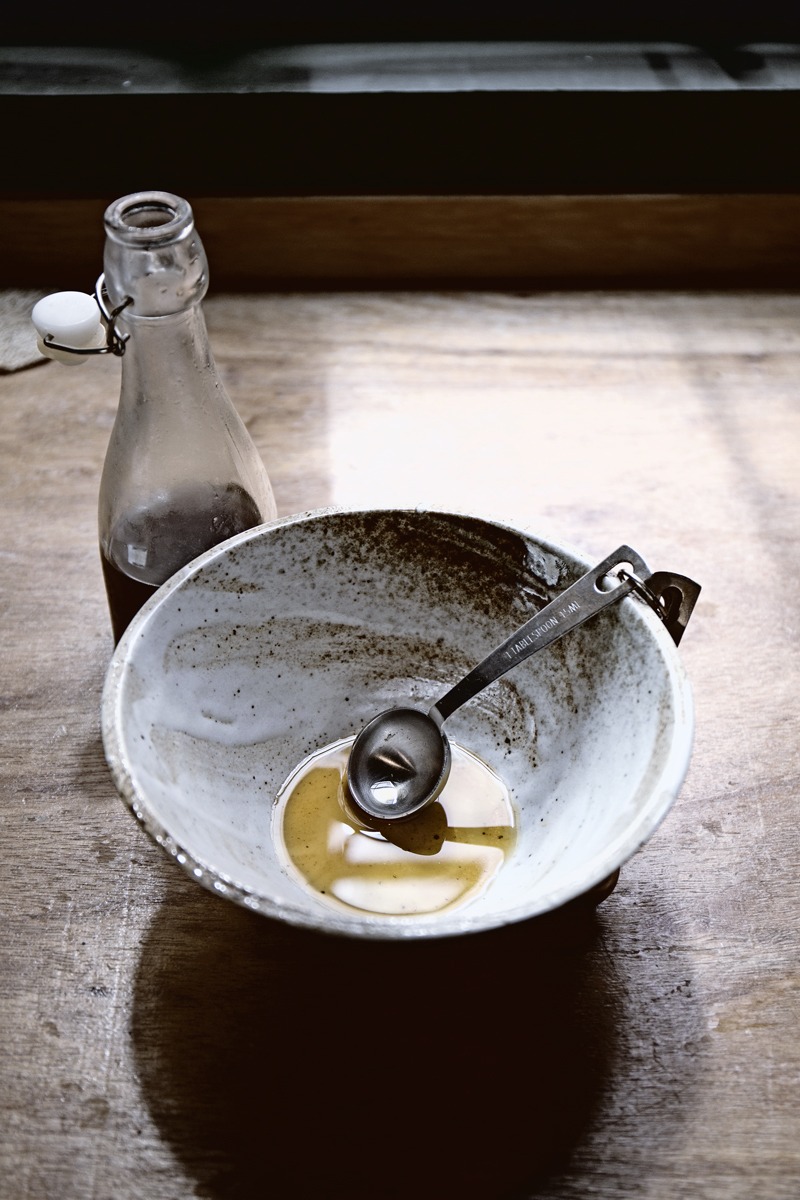 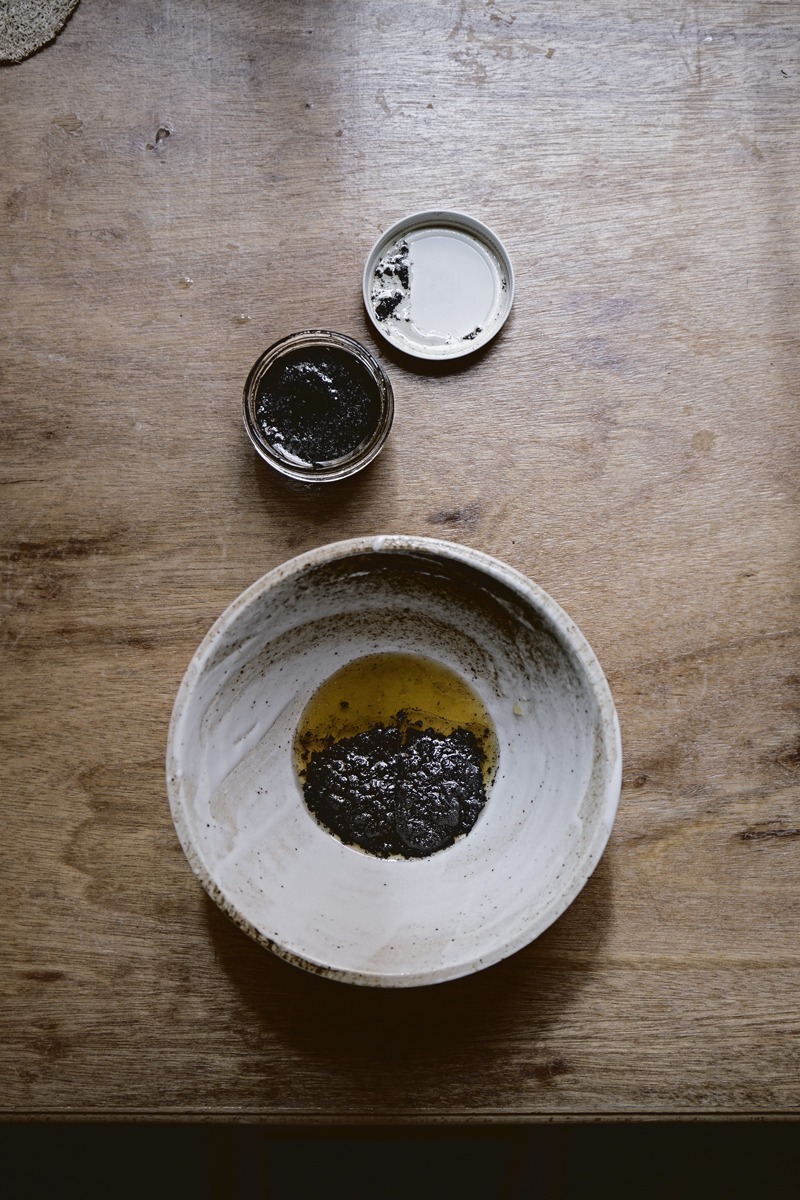 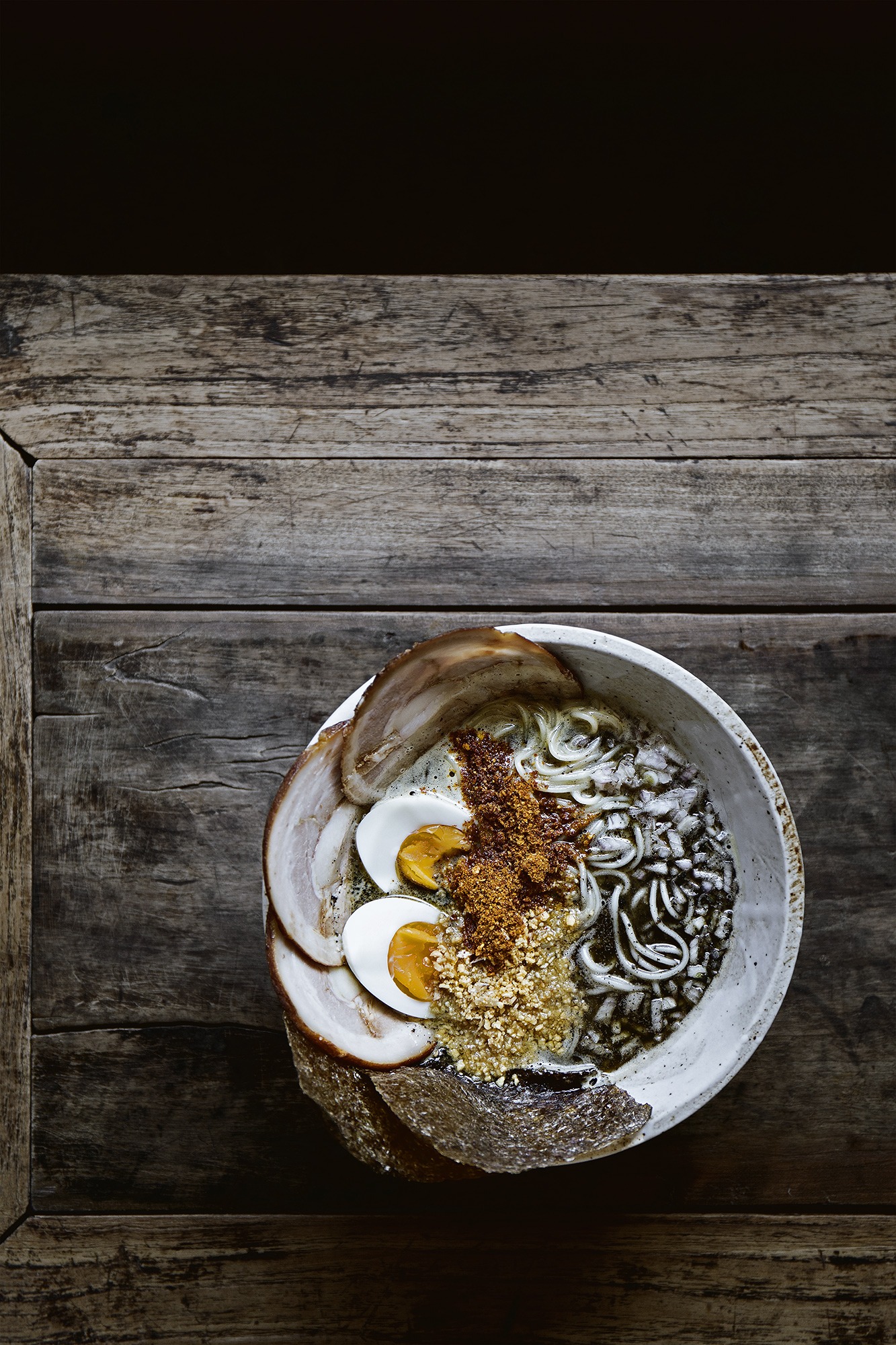 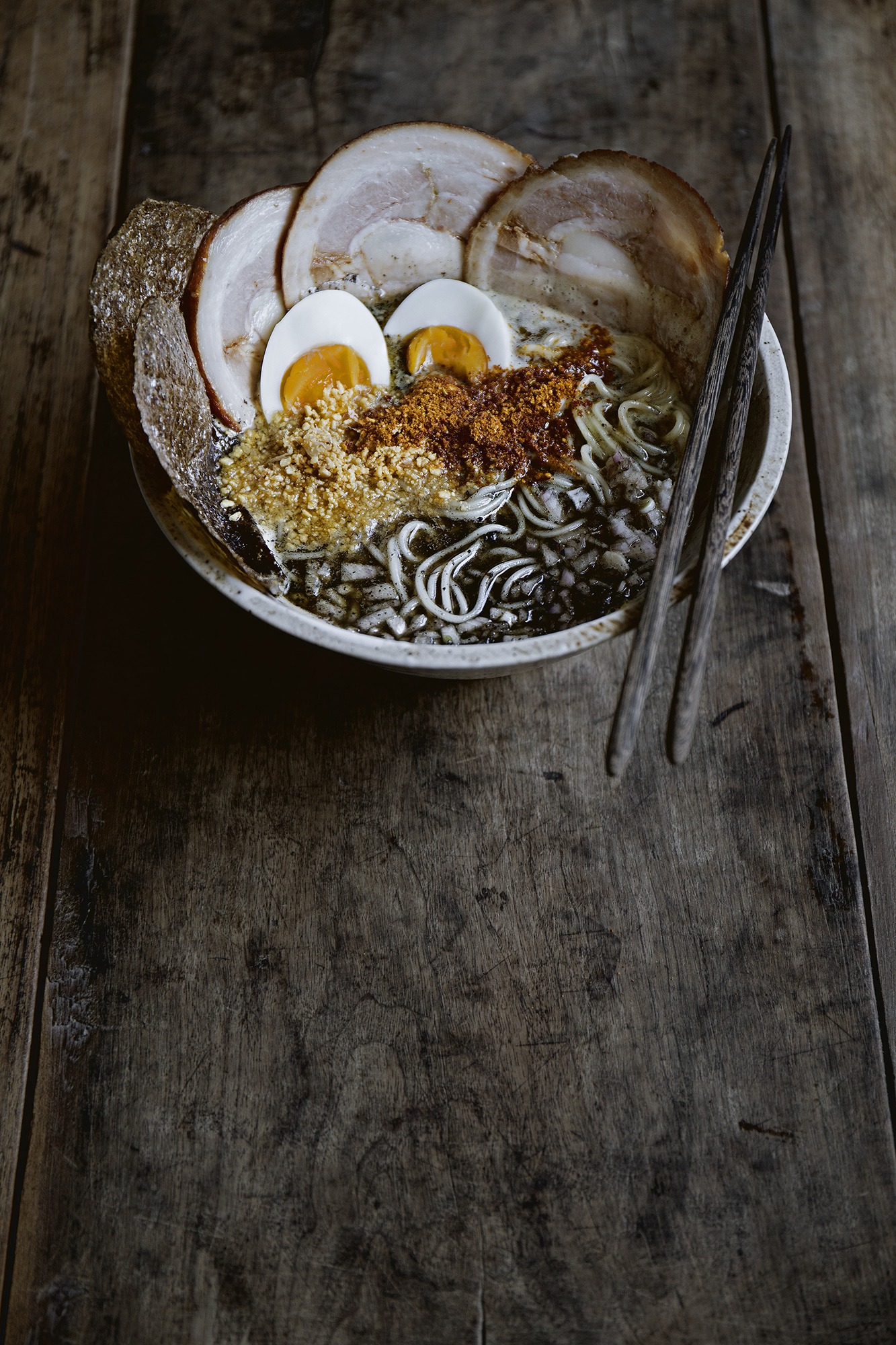 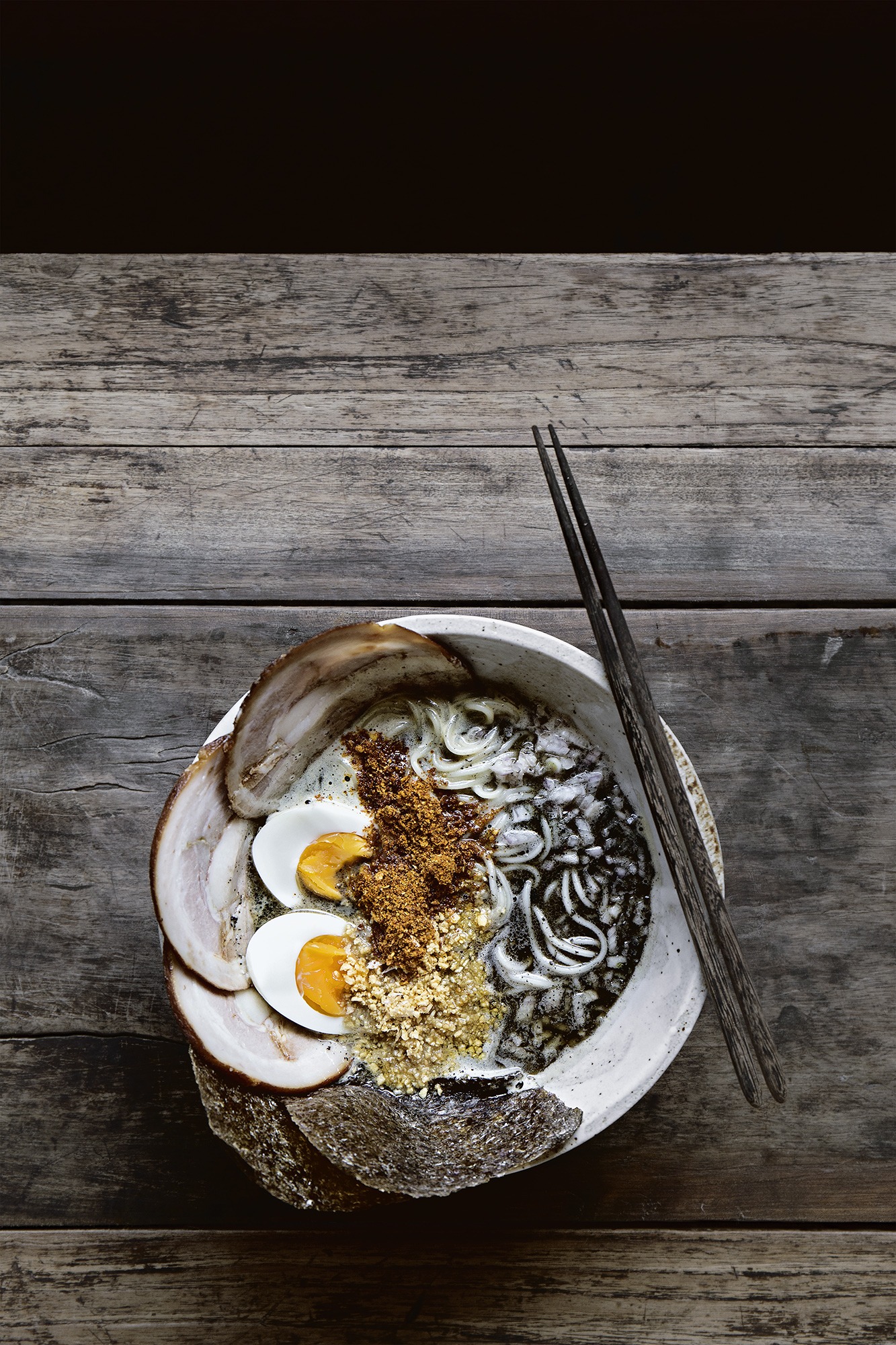 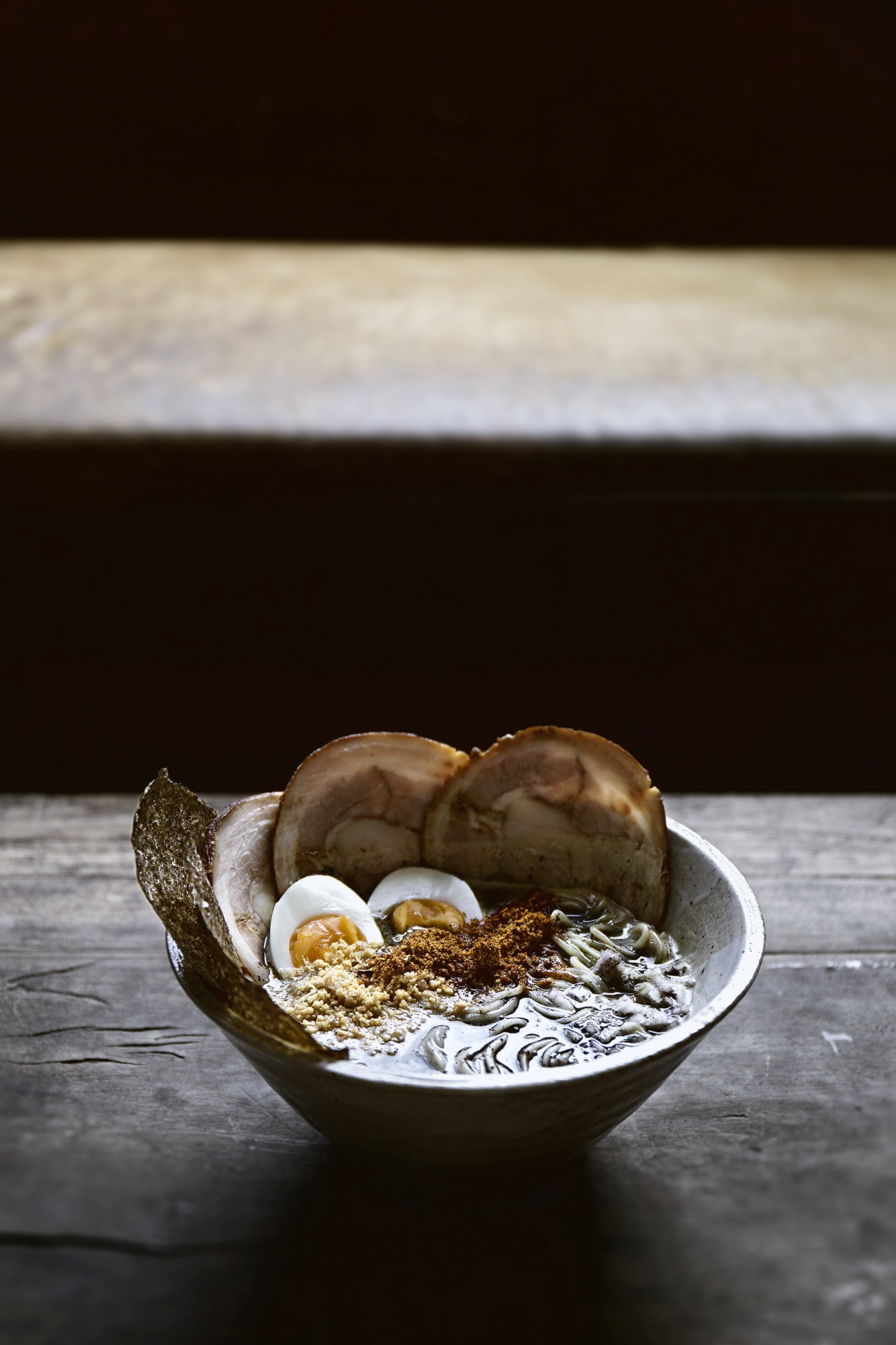 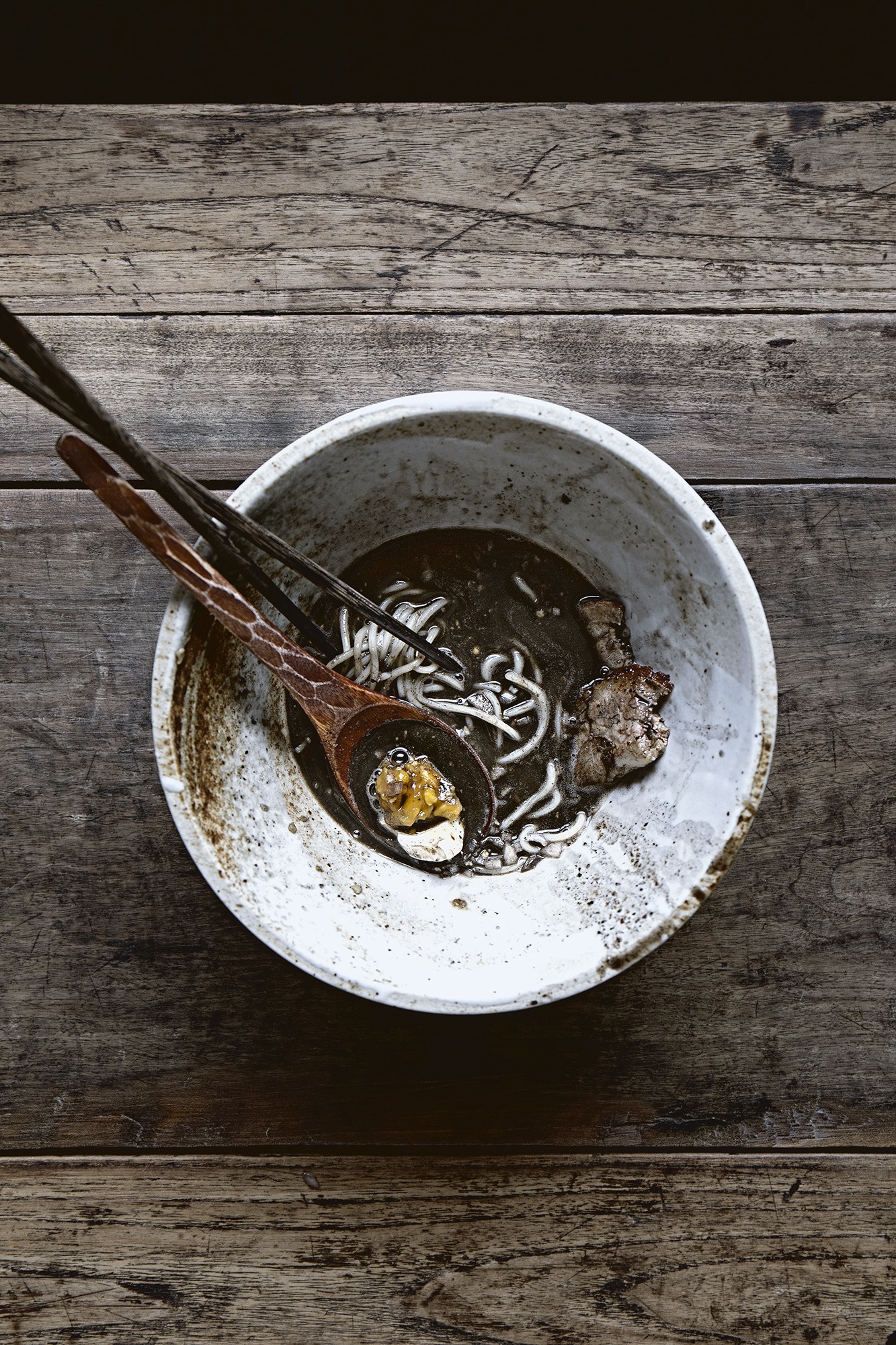 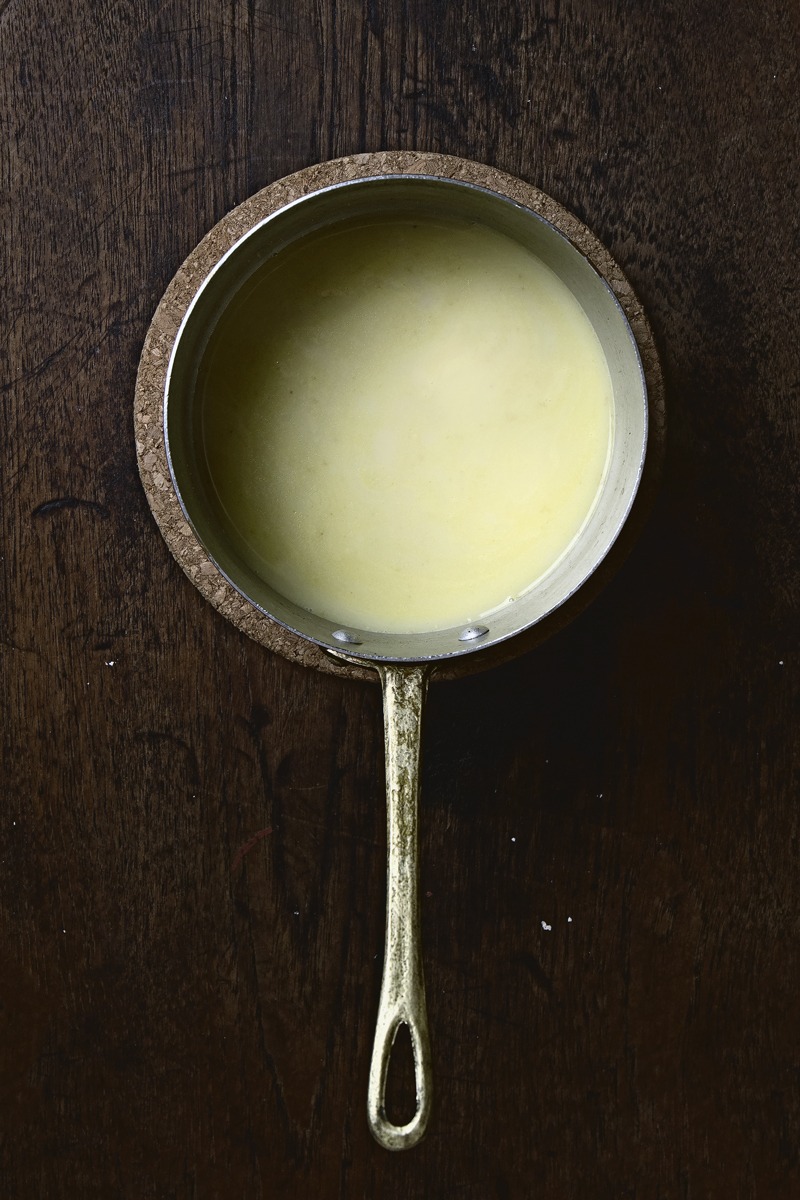 To complete this recipe, you'll need chicken white broth/tori paitan (an ultra-condensed milky broth made from chicken instead of pork) and ramen seasoning (a liquid extract of several umami-rich ingredients), both of which is in our upcoming cookbook, The Art of Escapism Cooking. But if you already have your own recipe for ramen broth and seasoning, you can try that, too.

CHAR SIU:
SQUID INKED LARD:
FOR ONE SERVING OF RAMEN:

* Guanciale is Italian cured pork jowl. It has a much higher fat content than the more common pancetta. But if you cannot find guanciale, just buy a fattier section of pancetta.