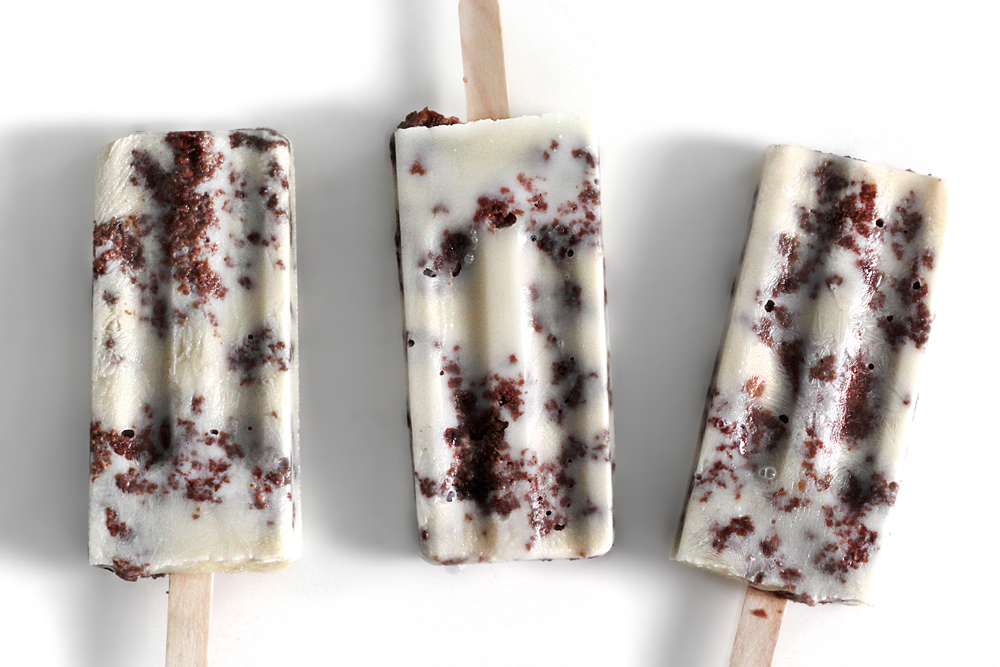 Let’s play a game, shall we?

Let’s see how much of my babbling you can withstand before you say “shut up, shut up, shut up!” and burst into the kitchen to make yourself one of these milk and any-brownie, or as I call it, brownie-cow popsicles?

Right, so you see here’s the thing. I kinda love Earth. Maybe not enough to tie myself to a tree per se, but I do love Earth enough that I have more bicycles than mascaras, and I haven’t had myself an ungodly orgasmic piece of toro, for like more than three years now. And believe me, I do love my ungodly toro. But there’s something else I love dearly as well… In the light of summer-days when reality strikes, I realized that I do also hold high regards for… a dry butt crack. Yes, yes they do come loose-fit, oversized, or wet, and I daresay, more frequently so, since a few years ago when we decided to live in this particular apartment-complex in Beijing. Little did I know that Earth and my butt crack were set on a collision course.

Right, so where was I? Yes, dry butt crack.

You see here’s the thing, as mentioned before, the apartment-complex we live in is supposed to be really “green”. Whatever that means… There’s no heater in the winter, or air-conditioning in the summer because the temperature inside the entire 10 ginormous buildings are monitored by… well, a “greener” system of some sort. Or at least as I was told, at a time before I learnt my lesson about China, and still believed what I was told. Awww… So we moved in, with good-will kicking and feel-good blazing, we, were gonna save earth, one lease at a time.

Then came the lesson. Never. Never. And I mean neeeevah, believe what you are told in China! Four excruciatingly warm summers later, we are looking more medium-rare than “green”, still melting inside our boxer-briefs, extra-large-holes tank tops, and our butt cracks… feeling wet my friend. Feeling wet.

Heh… hello? Right, there you are. 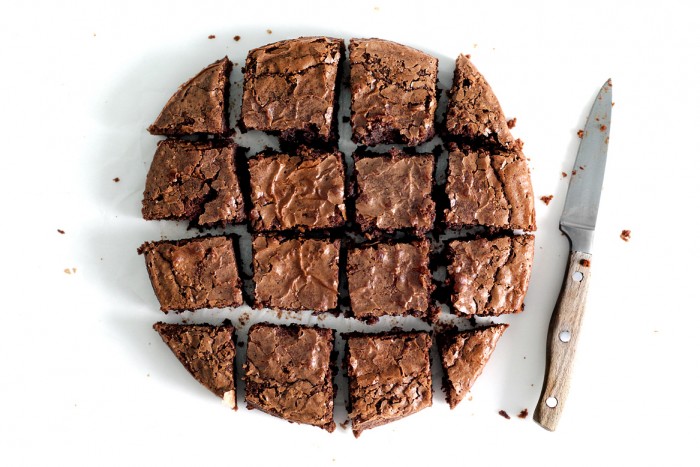 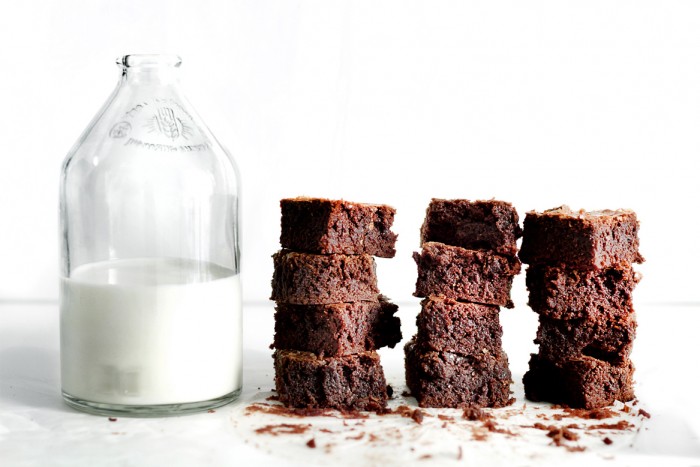 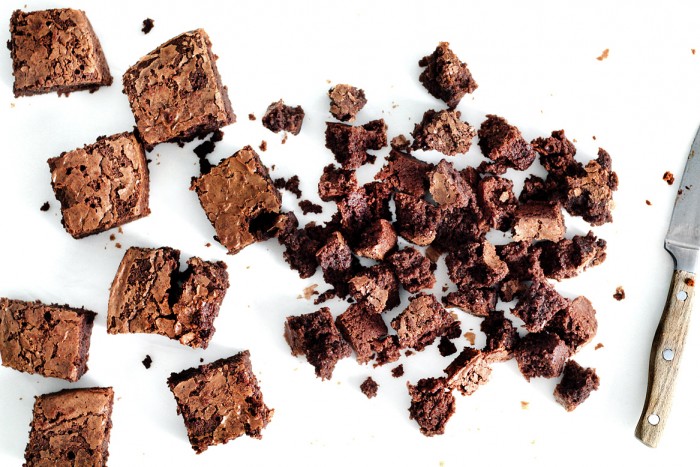 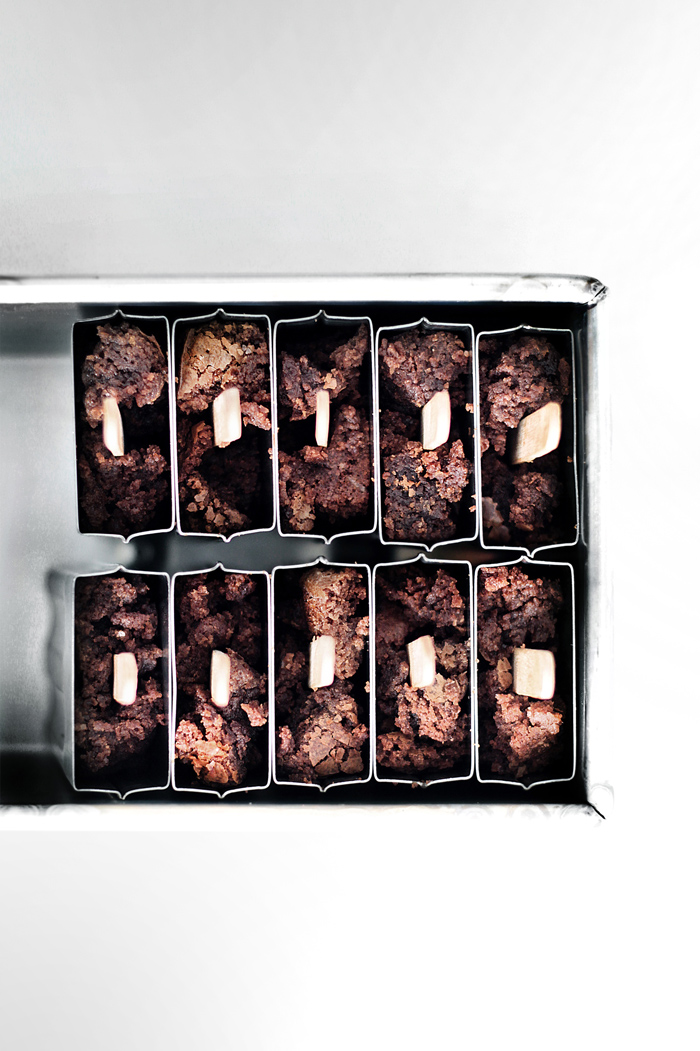 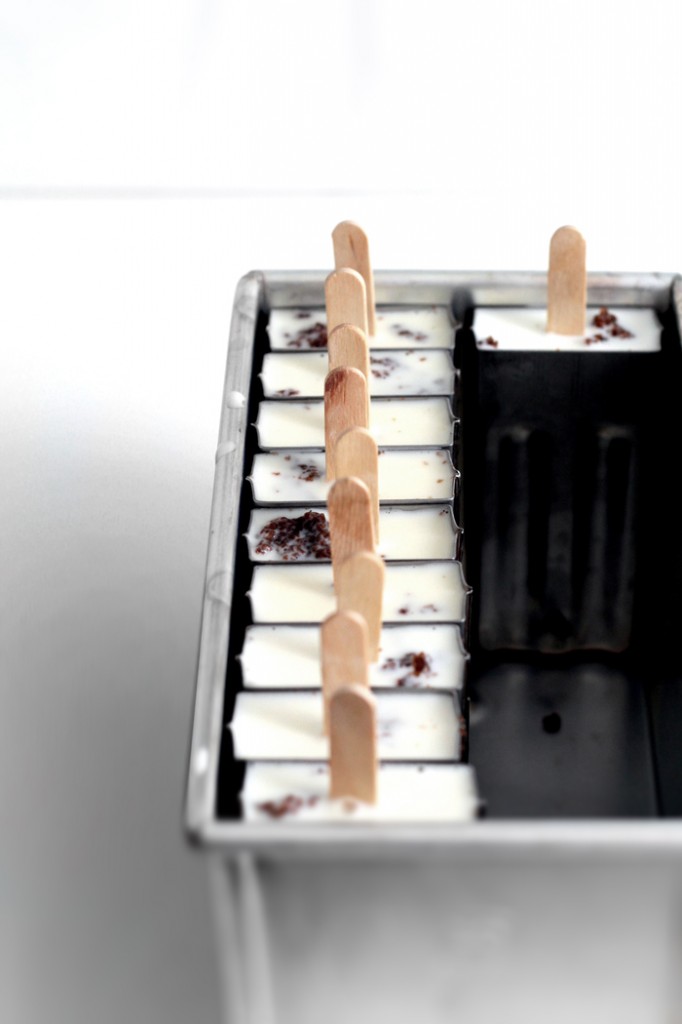 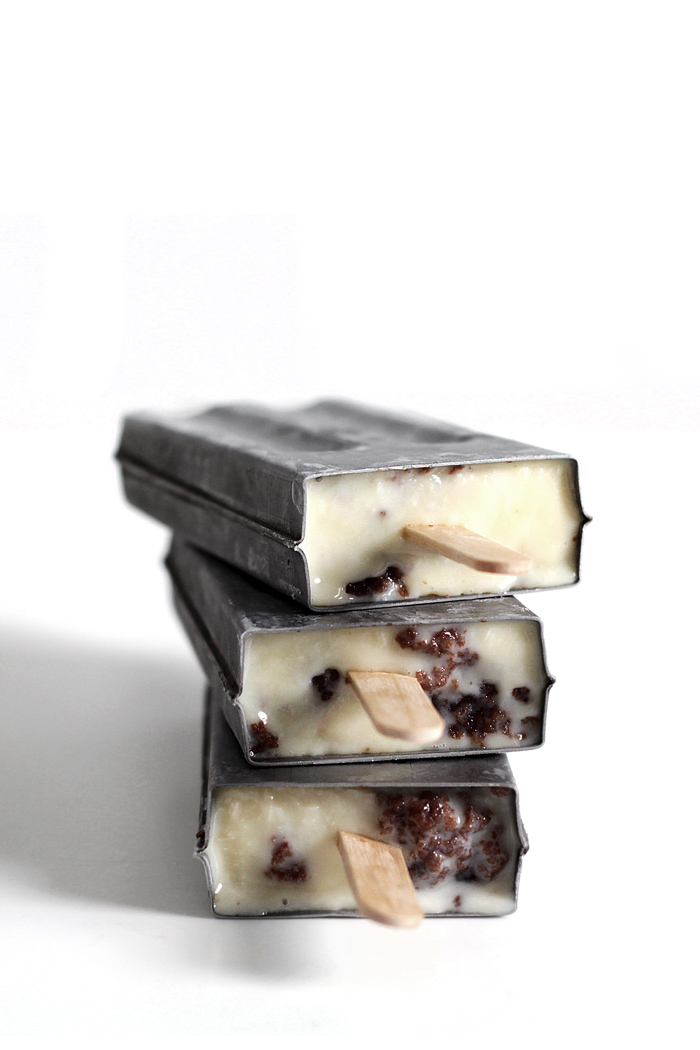 So why haven’t we moved you ask? If you were still here to ask questions… Well that’s a very kindly irresponsible thought for you to have I mean, what kind of earthlings are we if we were to bail on our promises just because we feel like we were brushed with meat-glue every time we hug?

Icecap-Jack, you melt. I melt.

So perhaps you should know that… hey, you there? I’m talking to you! Right, so you should know that heat tends to do things to weak minds… the other day when I literally risked my sanity and as a result, Jason’s well-being, by boiling a huge pot of stock for 4 hours which turned our lukewarm beachy apartment into a steaming mind-bending crater of active volcano, I think I hallucinated a lil’bit.

I drifted to the nearest Cold Stone joint, took off my boxer-brief and sat my steamy butt-crack right on top of their sub-zero slab of freezing stainless steels… Tssss~ aaahhh… like a steak on grill, now this is where my cheeks belong… And then, only then, somebody came and handed me my go-to combo – sweet cream base with mashed brownies.

That’s it. Nothing. Else. This is a purist’s Cold Stone and how it should be. I peaked through my fingers to see the next guy ordering something as if the local candy store is unleashing a fuck-fest on top of his ice cream-cup, and got really, really bothered. Get a room! This is a family joint! So I turned away and literally, with my ass chilling, I was about to dig into my…

… then I drifted right back to reality. Pot. Boiling. Hot. STEAM. VOLCAAAANO! See I have to take matters into my own hands…

Take a good brownie. And I mean a good brownie, the dense… chewy, fudgy and chocolate-y brownie, and in this case, infused with Nutella. Then break it into large chunks. Force feed them to your popsicle molds, and if you don’t have any, some freaking paper cups! Jam a stick in there, I don’t know, a chopstick for all I care, then pour milk that’s been thickened with sweetened condensed milk… Up up up up, up riiiight there when it just fills the mold. Then you freeze the bejeezus out of them!

Chewy gets chewier… Fudgy gets fudgier… Then we both get one and sit our asses down on a sub-zero freezer slab, and I’ll tell you about the other time when I… 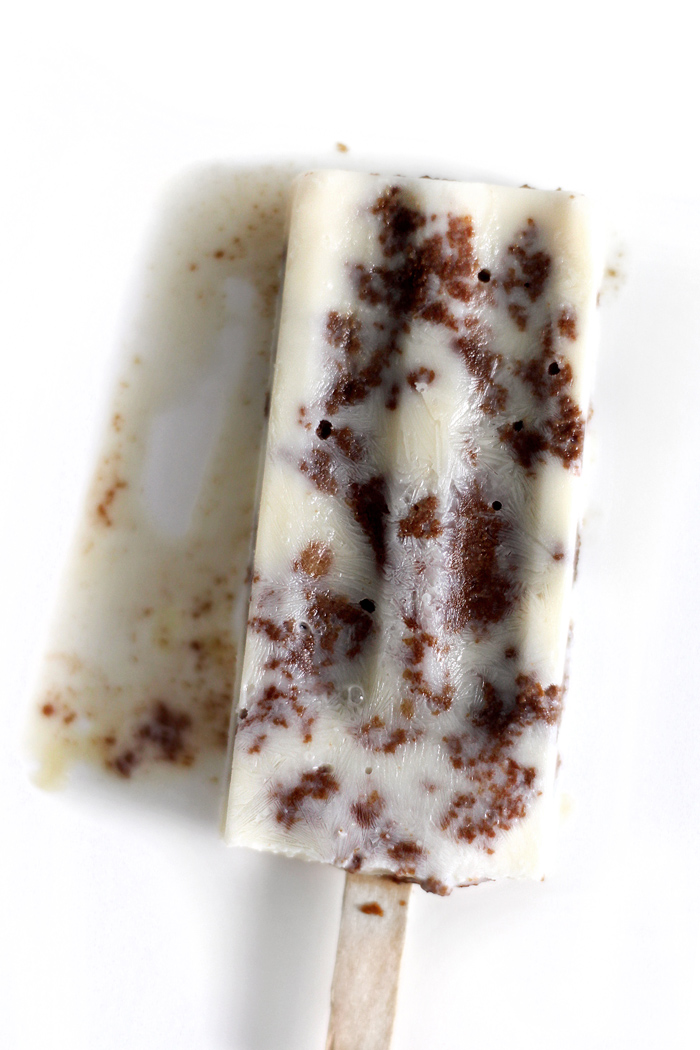 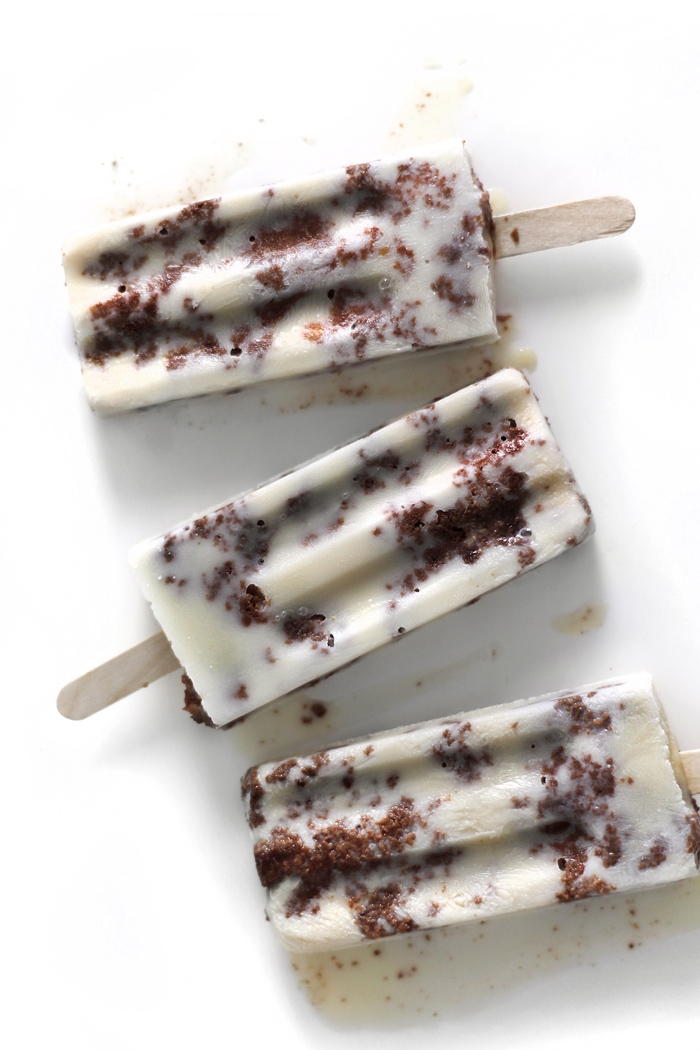 You don’t have to make your own brownie. I mean you could if you wanted to; and if you don’t know how, websites like Chopnotch have plenty useful recipes to help you make a brownie of your liking! You can certainly use a store-bought brownie, with flavours to your likings to make these popsicles. And if you want creaminess, you can substitute whole milk with half and half. Note that 3/4 cup of sweetened condensed milk is enough sweetness for my taste, but if you like a closer-to-commercial-level sweetness for your popsicles, use more.

In a microwave-proof bowl, add the bittersweet chocolate and unsalted butter. Microwave on high at a 30-seconds interval, stirring the mixture in between, until just melted (you’ll need approx 1:30 ~ 2 min). Whisk in the granulated sugar and large eggs until thick and even, then add the vanilla extract and sea salt. Whisk again until even. Add the all-purpose flour, fold the mixture together with a spatula until there is no flour-lumps left. Pour the batter into a parchment-lined, 8″ square-pan or round-pan. Bake in the oven for 25 min, until a wooden skewer comes out with moist crumbs from the center.

Let the brownie cool for 30 min.

Freeze for at least 6 hours to overnight until hardened (in my experience, the popsicles always feel a bit soft right after they are removed from the molds, so once hardened, keep them removed and wrapped in plastic-wrap instead of inside the molds). 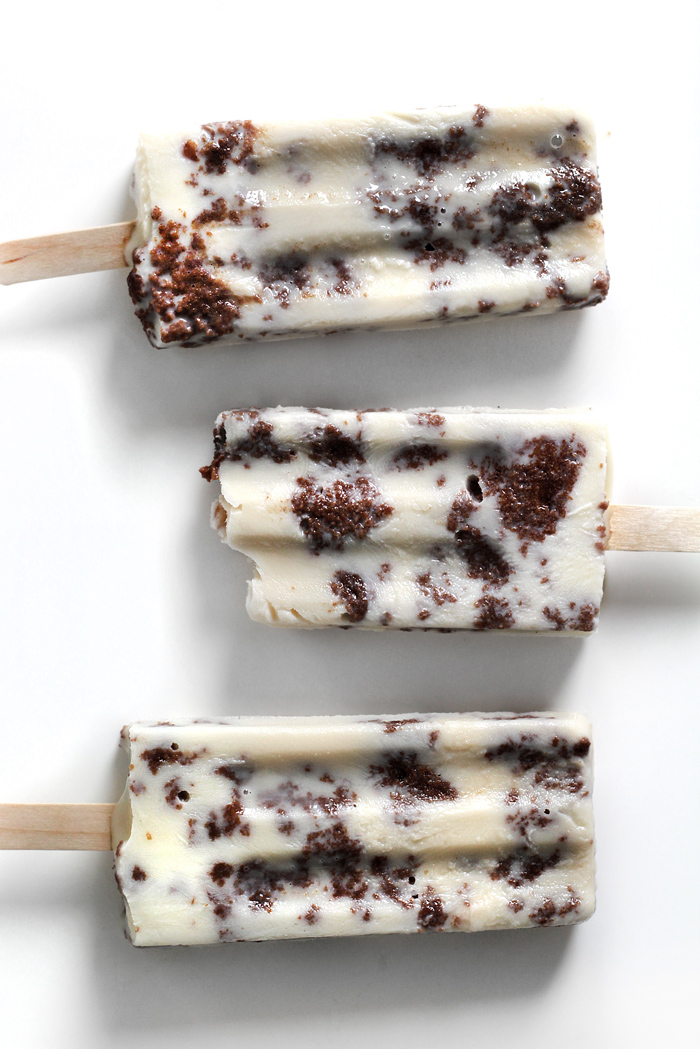