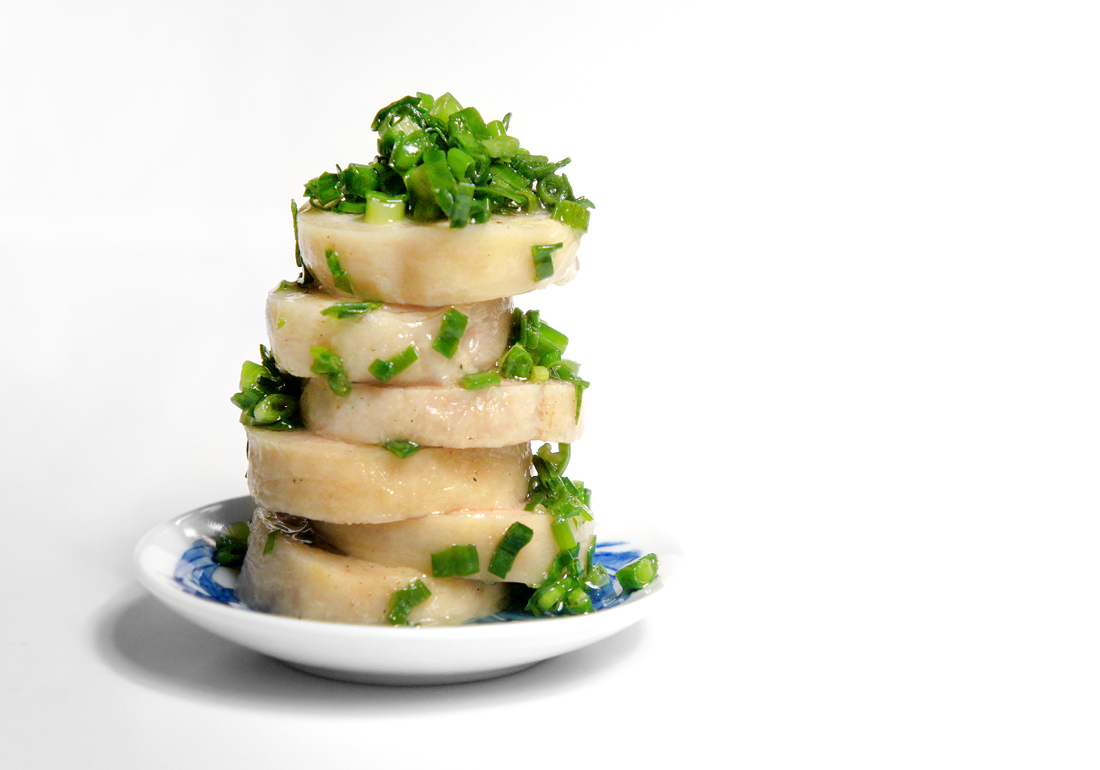 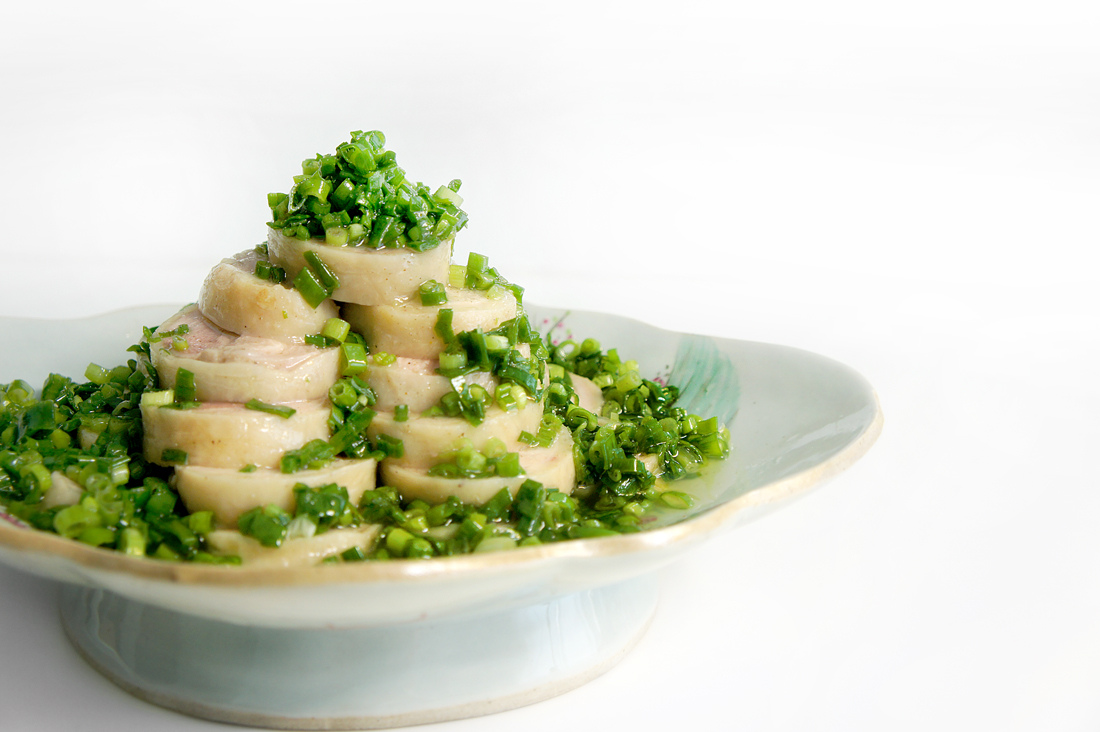 Lately Jason’s been GRILLED at work like a turkey on Thanksgiving, and soon gonna be off on a business trip for 2 days.  As an imaginary modern woman I loath at myself for saying it, but this can only mean one thing.  I AM SO~ooo~OOO BOOOOOORED (twisting and moaning….).  I HAVE things to do.  I do!  Like a whole line of queued-up posts waiting to be translated.  Like chirping chicklets urging to be fed…”chirp chirp chirp…”  Arrgh… I can’t even raise the slightest will to lift a finger.  Or make some long overdue calls to friends who probably thought I fell off a cliff for some time now.  Wait, who am I KIDDING?  I DON’T have friends in BJ…  Or do a Lord of The Ring marathon in my pj with my favorite junk foods!  Only I have done that like 3 times over.  The excitement to watch Gandalf say, “Yooou shall nooot PASS!” can only last so many time…  How about Little Merm… FXXX!  That’s pathetic!  Damn it!  How do unemployed women kill their time?

(the continuity of the steps will be appreciated later…)

Normally at times of extreme boredom like this, I would conjure up the most time-consuming, meticulously complicated, the next-CROWNED-QUEEN-of-my-“GNBT” thing to murder my afternoon!  But in this rare and peculiar instance… humph… who’s gonna eat it?  If anyone thinks that I consume at least my half of the food that’s roaming out of this kitchen, that’s crazy talk…  I’m still waiting for that elusive trend of voluptuousness to arrive, but over the years I have come to believe that all it ever will be is some form of cruel, black humor.  And pfff com’n… I can’t pull off a Nigella.  So to eat home-alone, let me stick to something relatively more de-LIGHT-ful. 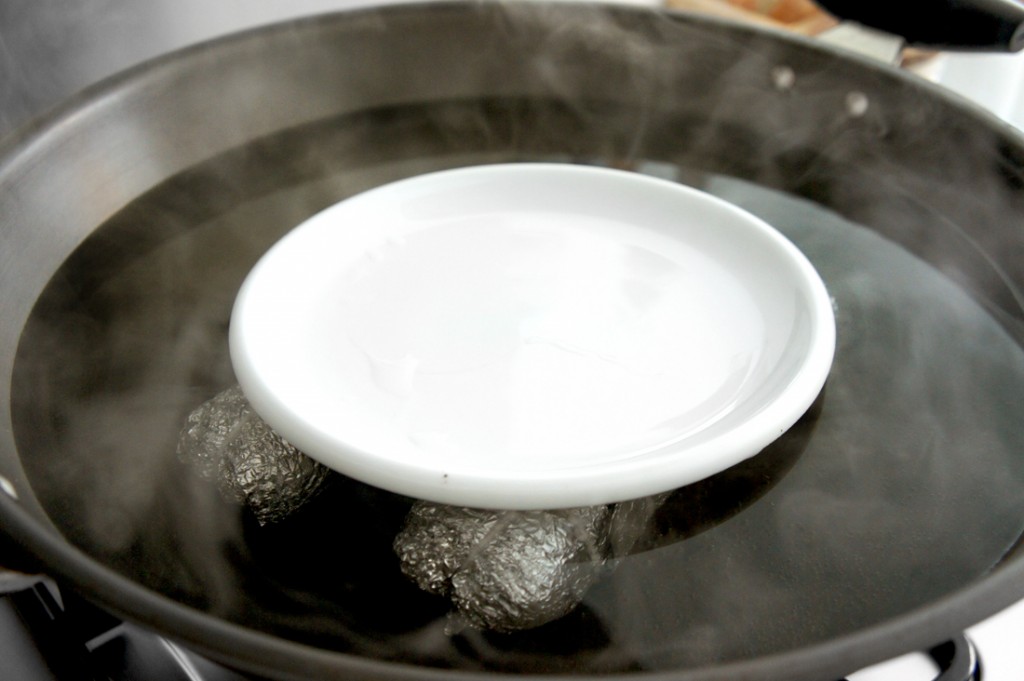 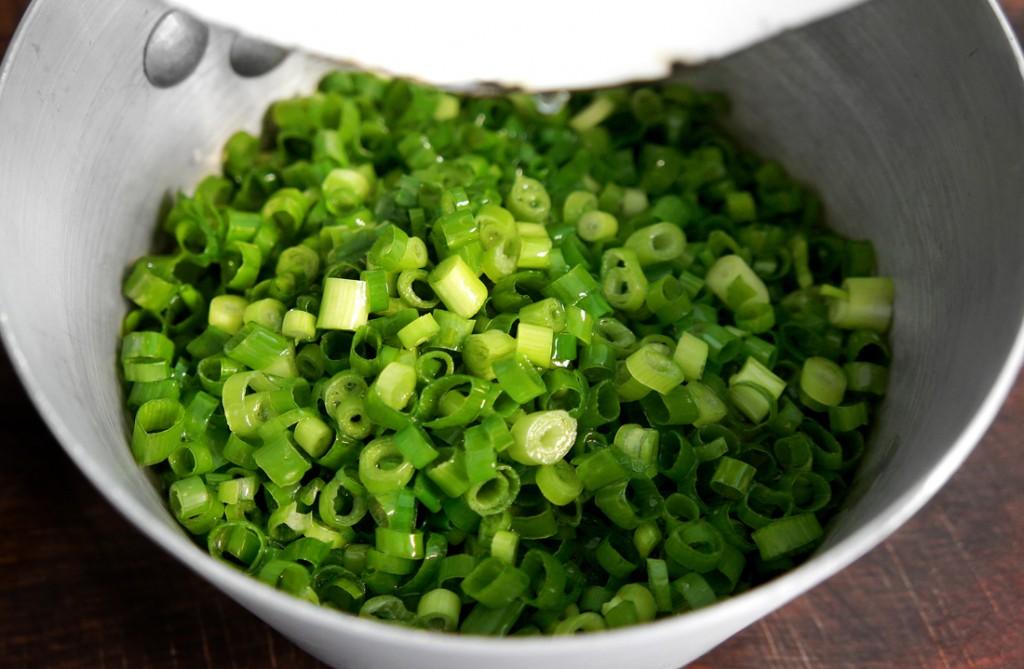 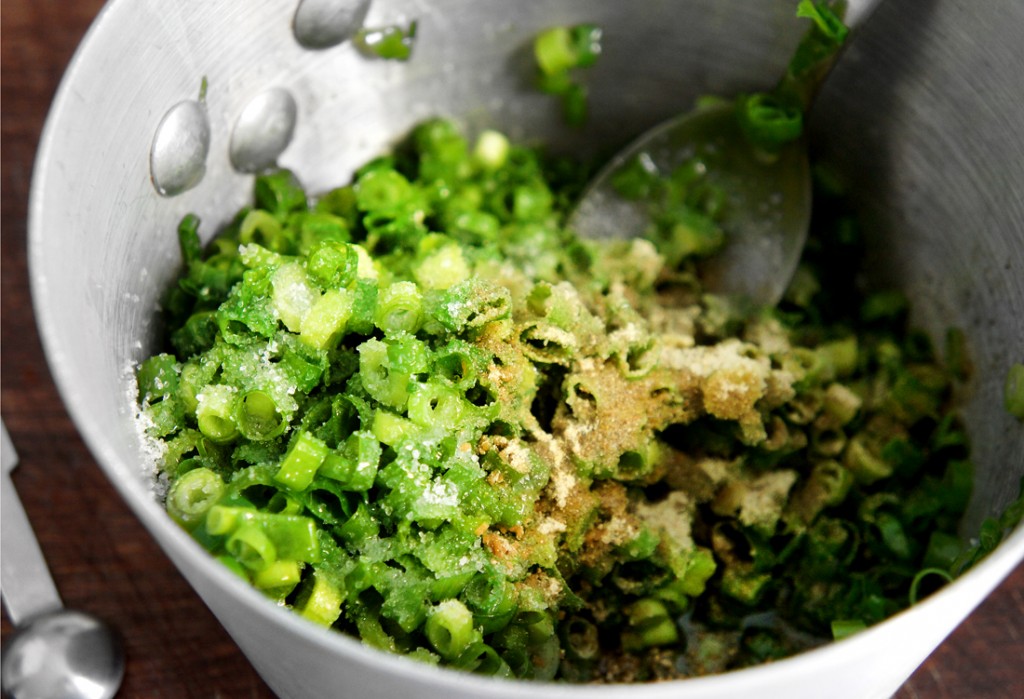 Well, I said “relatively”.  In case it isn’t apparent enough – I don’t make diet foods.  This is as healthy as it gets in my kitchen.  Poached chicken legs drenched in spring scallion oil… OLIVE OIL.

This is an absolutely classic in Chinese cuisine.  A common, cold appetizer that’s vastly popular in the southern region.  When I was little, scallion-oil chicken used to be a hot dish, but somehow over the years it morphed itself into a cold appetizer and has gotten much more refined.  In another word, it had a make-over.  These changes makes it naturally perfect for a dinner party because the chicken can be made a couple days ahead in the fridge, then sliced before it is served.  The scallion oil makes in no time and can be prepared several hours before it’s needed as well.  It looks like a huge production but actually is pretty simple. 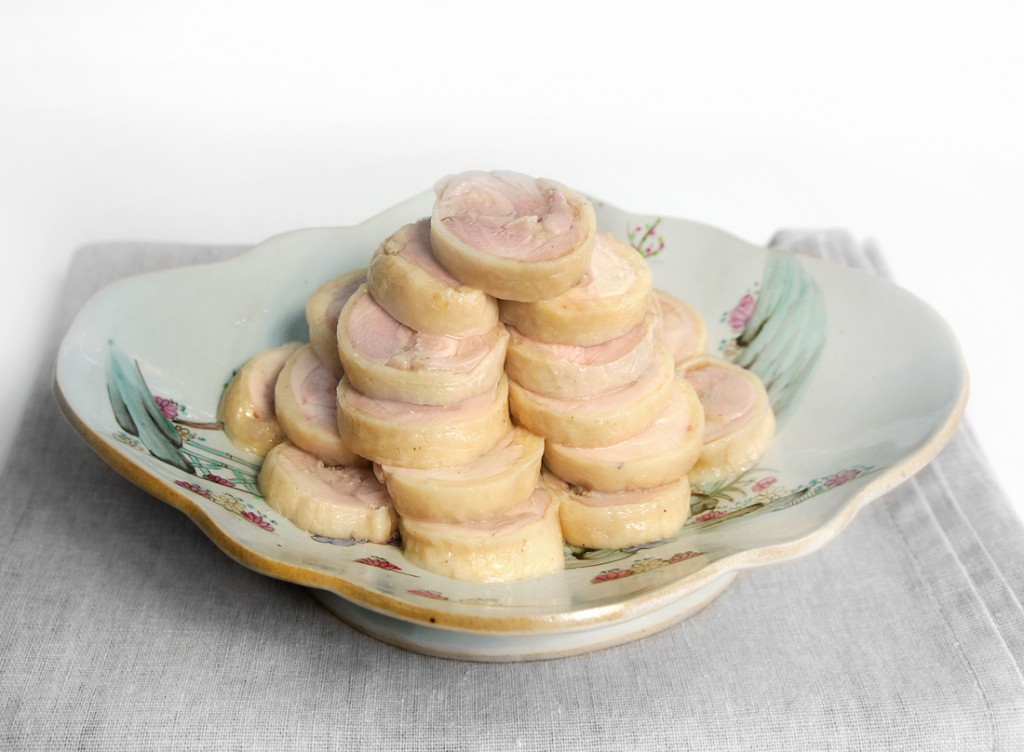 I am using de-boned meat of a whole chicken leg (drumstick + thigh).  It has to be a WHOLE chicken leg in order to be long enough for the rolling and slicing.  A lot of times what’s available in the supermarkets is de-boned thigh meat only.  That probably won’t work.  So either buy a whole chicken leg and de-bone it, or go to the butcher to have it done (which is what I did).  … Did… did somebody said “chicken breasts”?…  Whats?!  NO!!  Absolutely not!  DESPICABLE!  I’m not even going to dignify that question with an explanation besides… NO!

The scallions have to be spring scallions or baby scallions.  The thinner the better.  None of those ginormous, jumbo ones.  I haven’t tried using French chives for this but I suspect that it would turn out nicely as well.  So here we go, a little afternoon deLIGHT for home-alone. 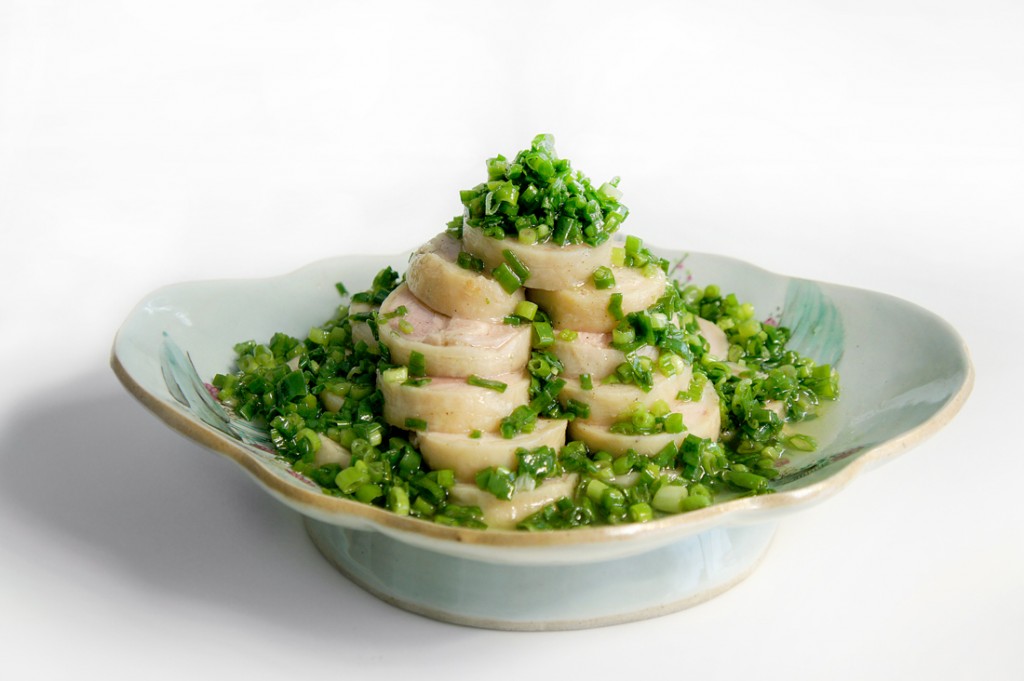 If the chicken meats have any excess skin, trim them into a relatively uniformed shape (sort of like a square).  Rub the chicken meat thoroughly with the marinates and let them sit in the fridge for at least 2 hours.

Lay the chicken meat, skin-side down on the board with the “drum-part” pointing at me and the “thigh-part” pointing away.  Start rolling the chicken meat into a log AS TIGHTLY as possible starting from the “drum-part”.  Then take a large piece of plastic wrap and wrap the chicken log as tightly as possible as well, leaving out as much air as I can.  Repeat with another piece of plastic wrap in the other direction.  Then take a large piece of aluminum foil and roll the plastic-wrapped chicken into the foil again.

Then use kitchen twine to tie up the log like I would with a meat roast.  Here’s how: (may need to refer to the pictures to understand)

Repeat the same steps with the other chicken leg.  Then place the 2 rolled chicken logs into a pot that’s big enough to hold and fill with cold water.  Set it on the stove on medium heat to bring to a simmer.  Once the water has come to a simmer, turn the heat OFF.  If the logs are floating a little because of the air inside, press it down with a plate.  Then put the lid on and let the chicken cook in the residual heat of the water for 30 ~ 35 min.

After 30 min, remove the chicken logs and shock them in iced water.  When they are completely cooled down, they can be stored in the fridge for a couple days until needed.

To make the scallion oil:

Prepare 2 cups of finely diced baby scallions and leave in a big bowl.  Heat up the olive oil in a small pot until hot but NOT SMOKING.  Try throwing a piece of scallion in the oil.  It should bubble up gently but NOT exploding…  Pour the oil into the scallion and stir to combine.  Chill in the fridge for several hours until it’s needed.

To serve.  CAREFULLY remove the twine, aluminum foils, then plastic wraps from the chicken.  I would suggest cutting it open with a scissor instead of tearing…  Don’t tear.  Use a VERY VERY SHARP knife to slice the chicken into medallions.  Add the salt, white pepper and dashi granulate into the scallion oil and fold it in evenly.  Pour the scallion oil on top of the chicken and serve.

This is exceptionally great with a bowl of hot rice… 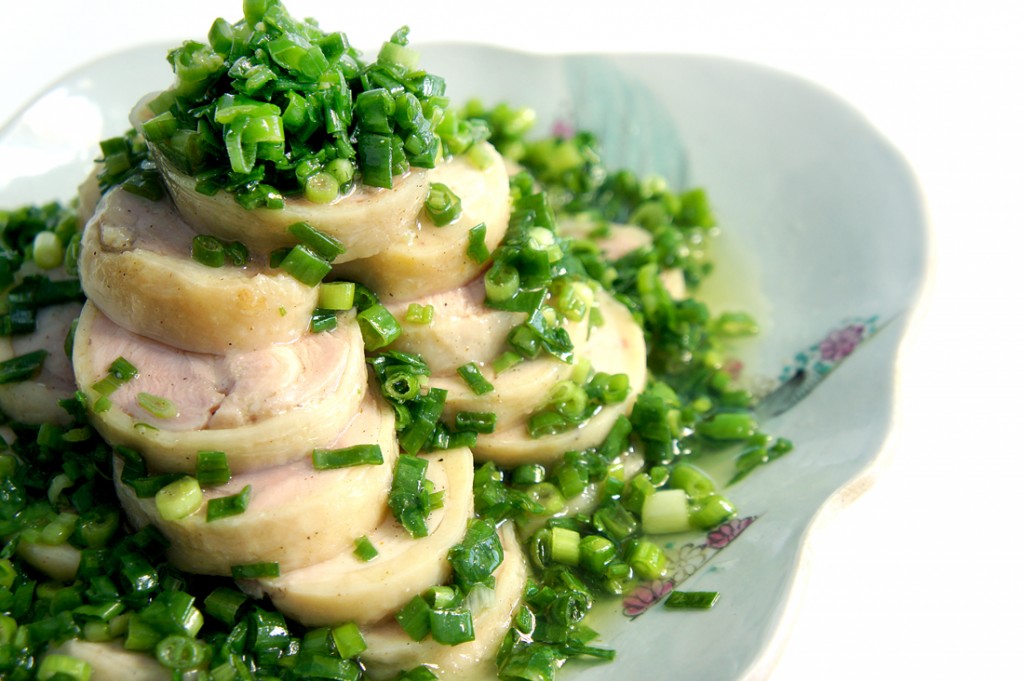