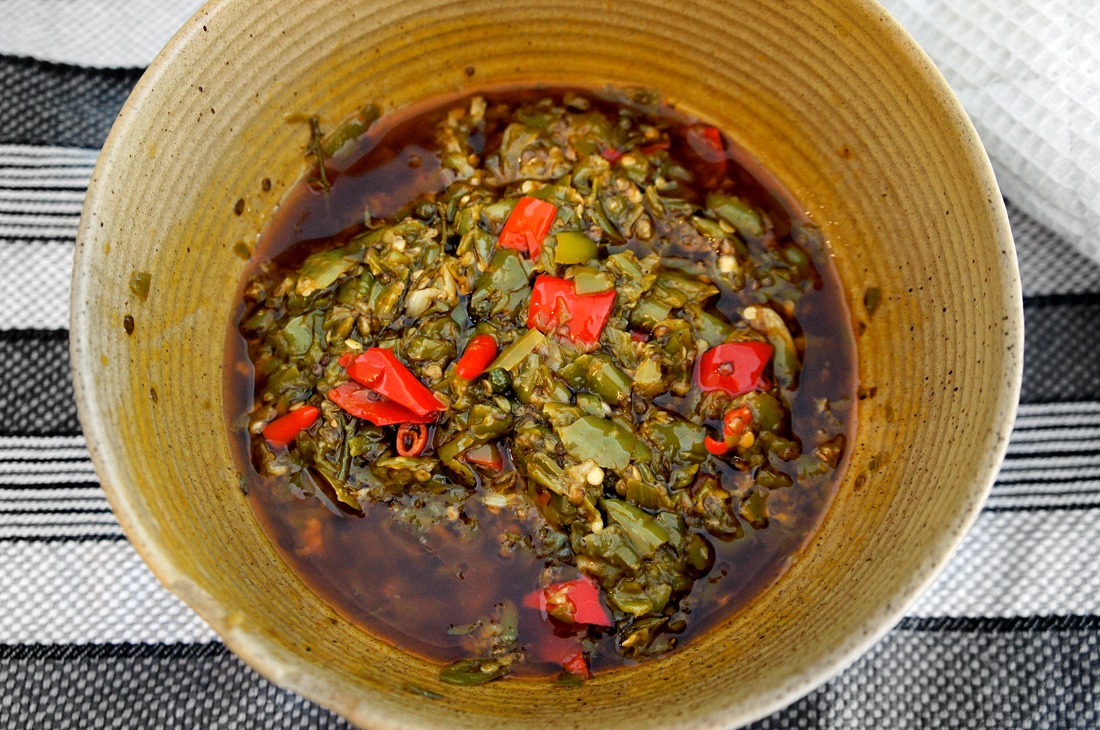 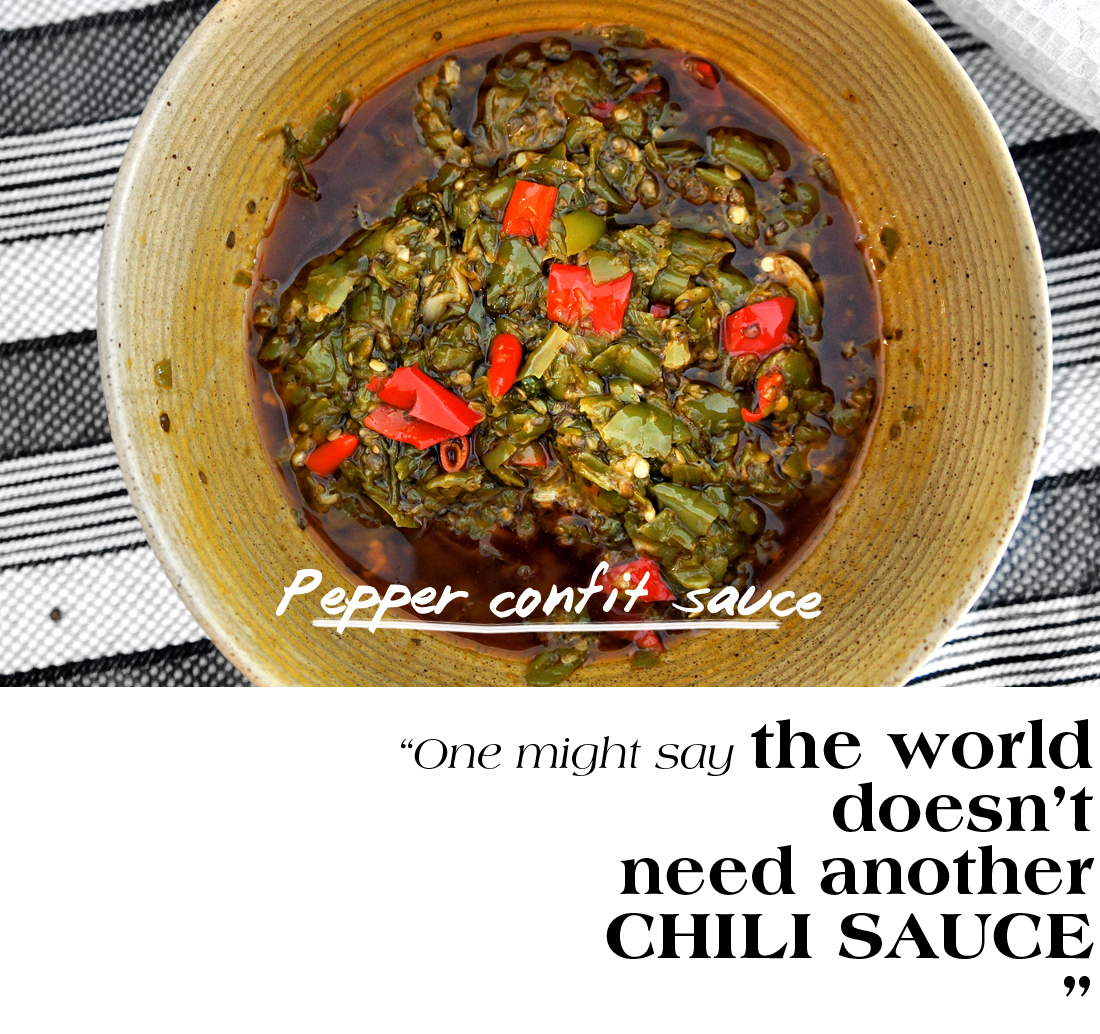 But the world wants this.  A Chili Pepper Confit.

This is not a chili paste, or a chili oil, or a hot sauce.  Difference?  All of the above are wingmen who deliver heat to the main attractions and are otherwise just condiments on their own.  They are the Keanu Reeves.  This is Al Pacino.  Pepper confit is fresh peppers slowly stewed in fat until they lose all their moisture and concentrate down to a pungent, fragrant, fiery explosion on the senses.  It may not look much, I know, but neighbors would know that this is stewing on my stove and attempt to eat a bowl of rice with it. 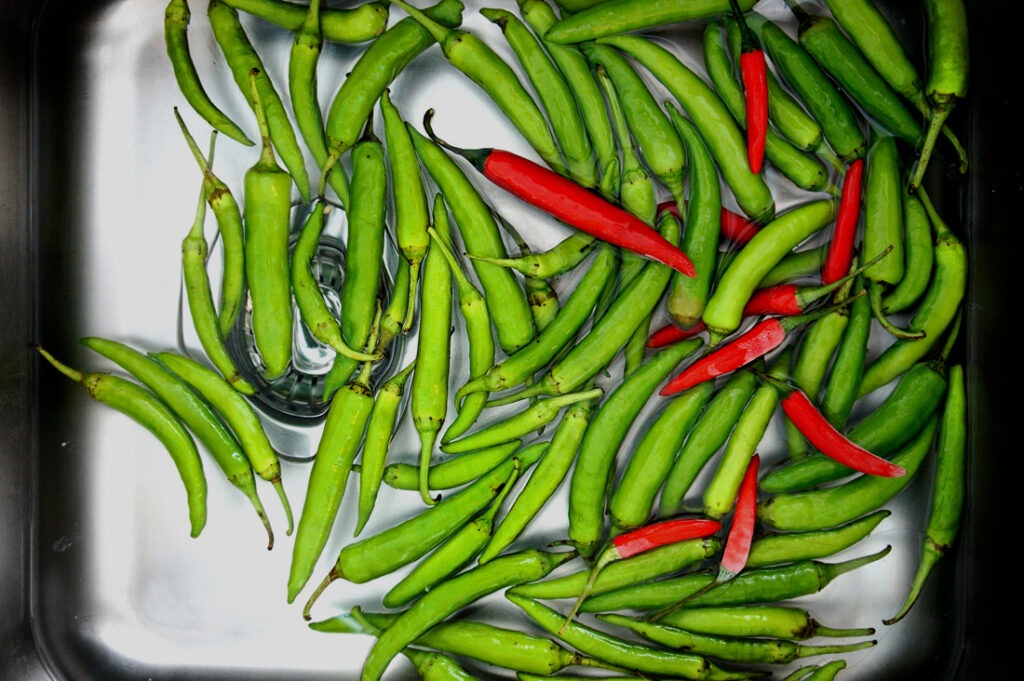 OK, I hear.  For those who can’t handle much heat ( sneeze… wussy…), this may look like a death threat on steroid.  Point taken.  It is… very spicy.  But this can be completely variable based on the type of chili used.  What’s being confitted today is a long Asian green chili called “Hang chili”, 杭椒.  It has a respectable seat on the heat scale, but more importantly has a very prominent, fragrant chili flavor.  The smaller, more common red chili is added for color and additional heat.  But any THIN-SKINNED pepper can be used.  Japanese Shishito could be a more friendly choice for the non-heat junkies.  Although I have to stress that the heat shouldn’t be completely muted.

(As I’m writing this, an unmistakable sound of thunder humming in the distant background.  The satellite paused.  And I hear…. dit dit… dat dat…dit dit..  Is that… RAIN?!!  First rain in months!  In this chapped desert land where my skin cracks!!  Ah… must be all the peppers sacrificed today…) 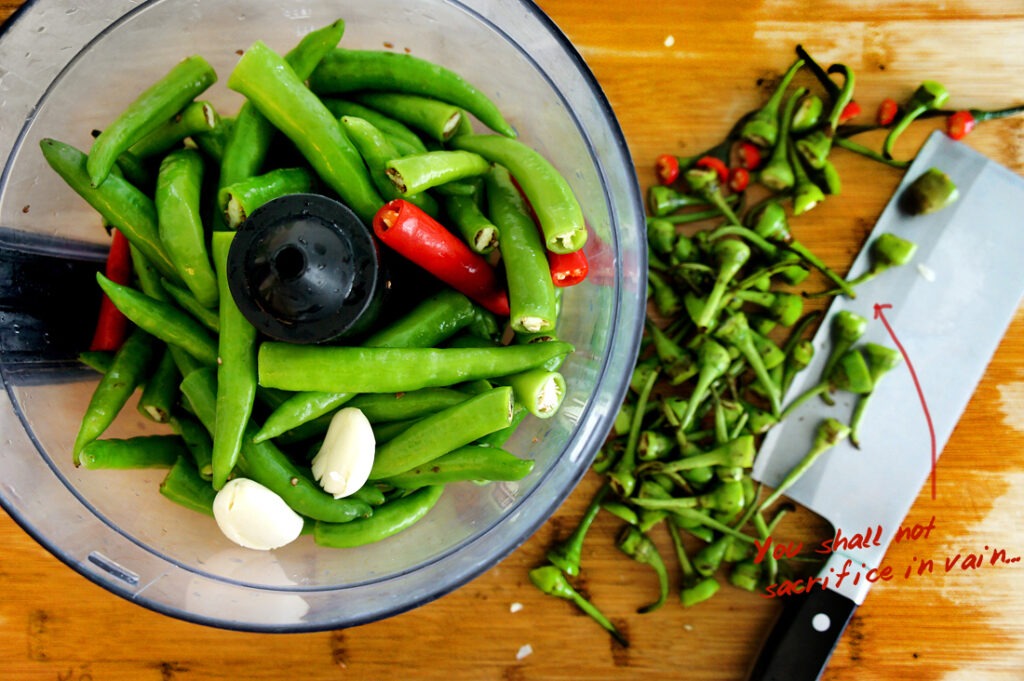 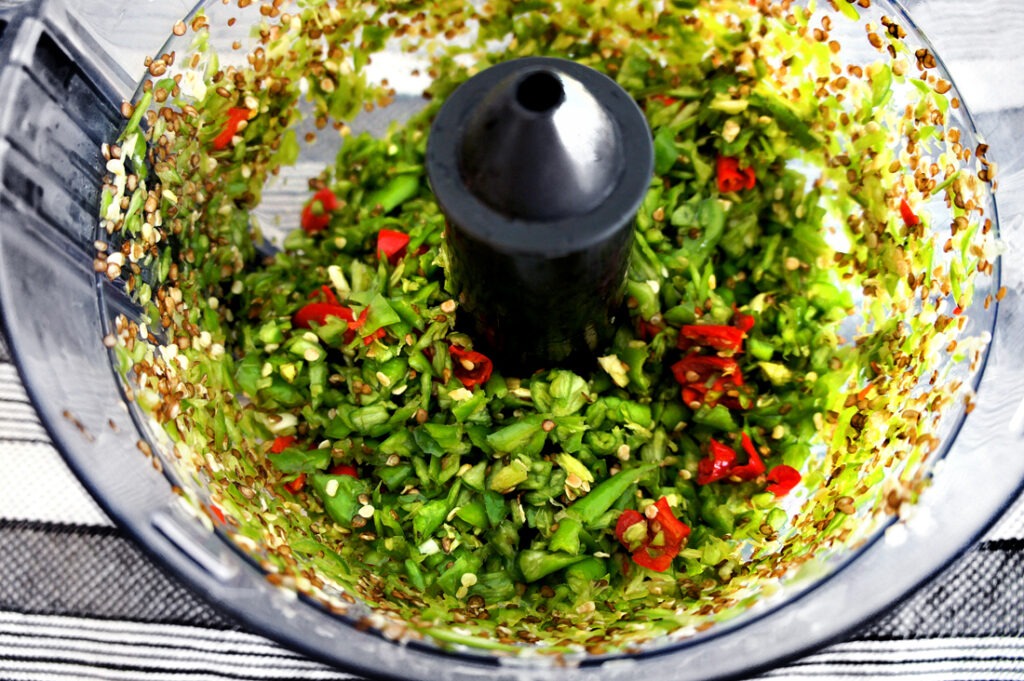 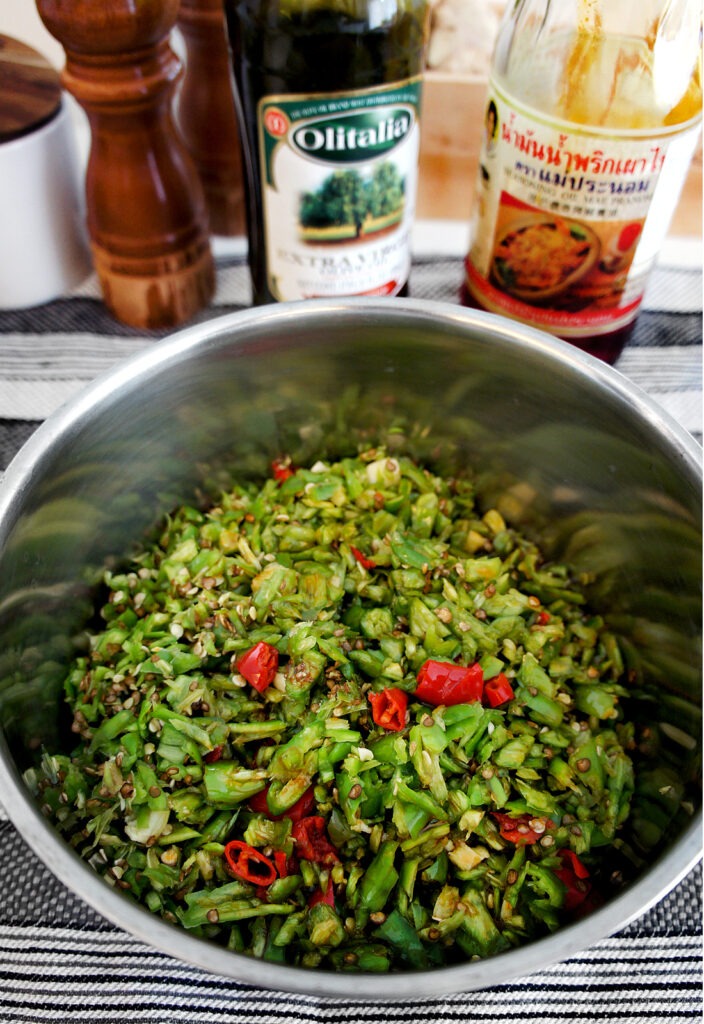 There is an ingredient in this recipe, a key ingredient unfortunately, that may not be so easily located elsewhere in the world.  It is FRESH Sichuan peppercorn （鲜花椒）.  It plays such an important role in many Sichuan style dishes because it brings a pungent, almost floral fragrance into play that the dried Sichuan peppercorn lacks.  It is a good souvenir worth smuggling when traveling around China.  And it freezes exceptionally well.   Otherwise replace it with 1/4 tsp more of ground, dried Sichuan peppercorn. 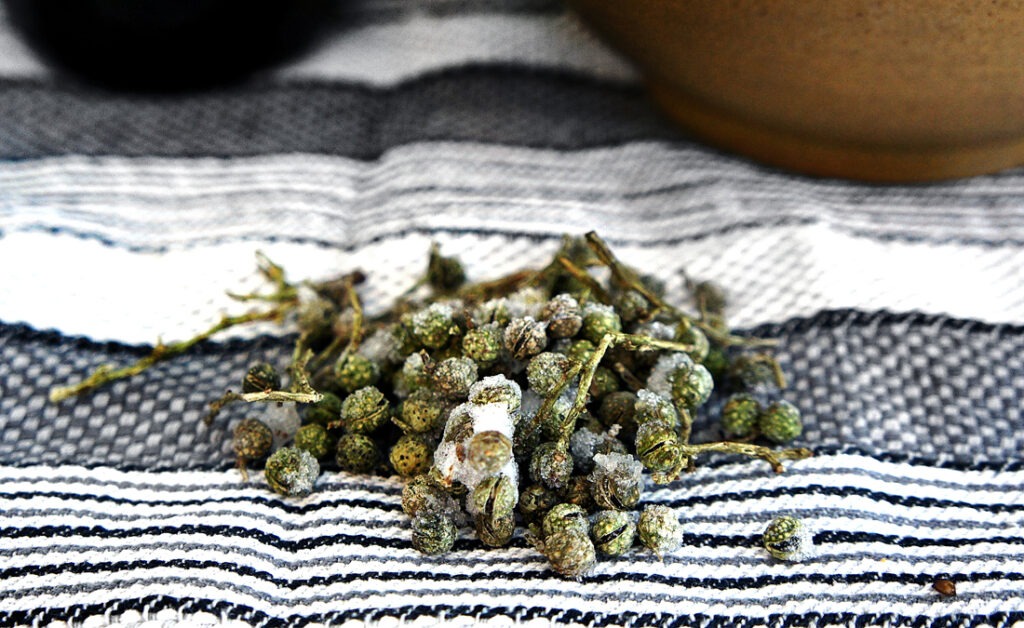 Make this, and there shall not be another desperate night when there’s nothing but expired milk in the fridge, and in all despair, you take a bite of the watery canned tuna with a spoonful of self-loathing.

Because this will taste good on anything.  Also it will keep a LONG time in the fridge.  It is a confit after all.  It can bring life into a bowl of rice, some canned tuna, steamed vegetables…hell! even manage to bring salvation to the virtually lifeless, flavor deprived, sad, old chicken breast.  And it’s extremely easy to make. 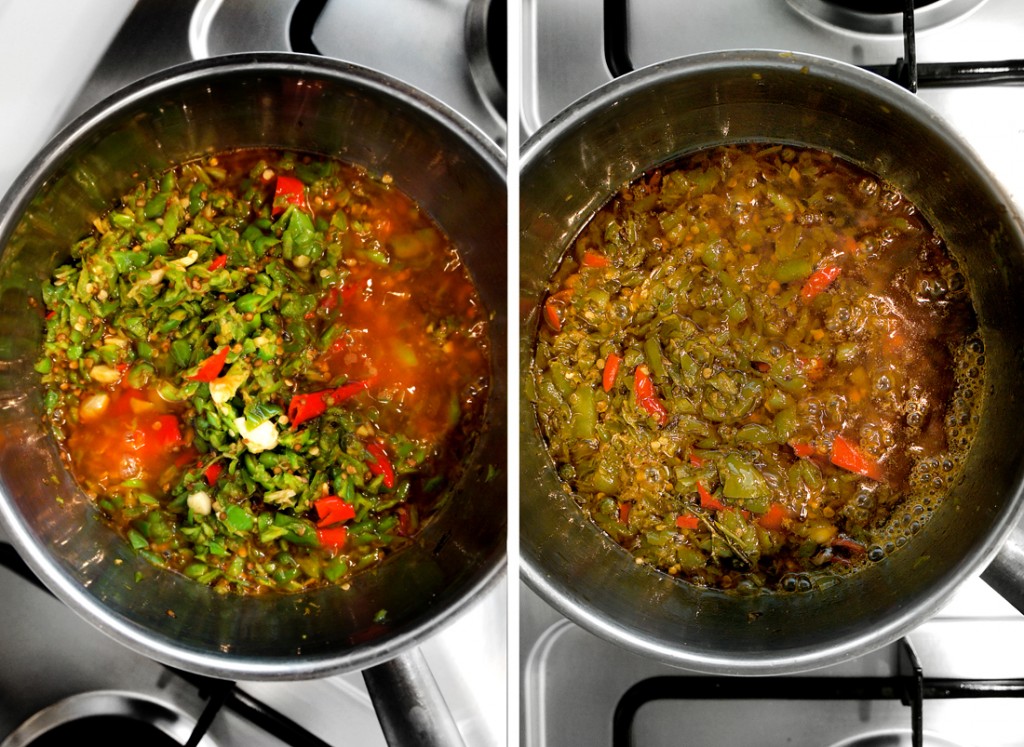 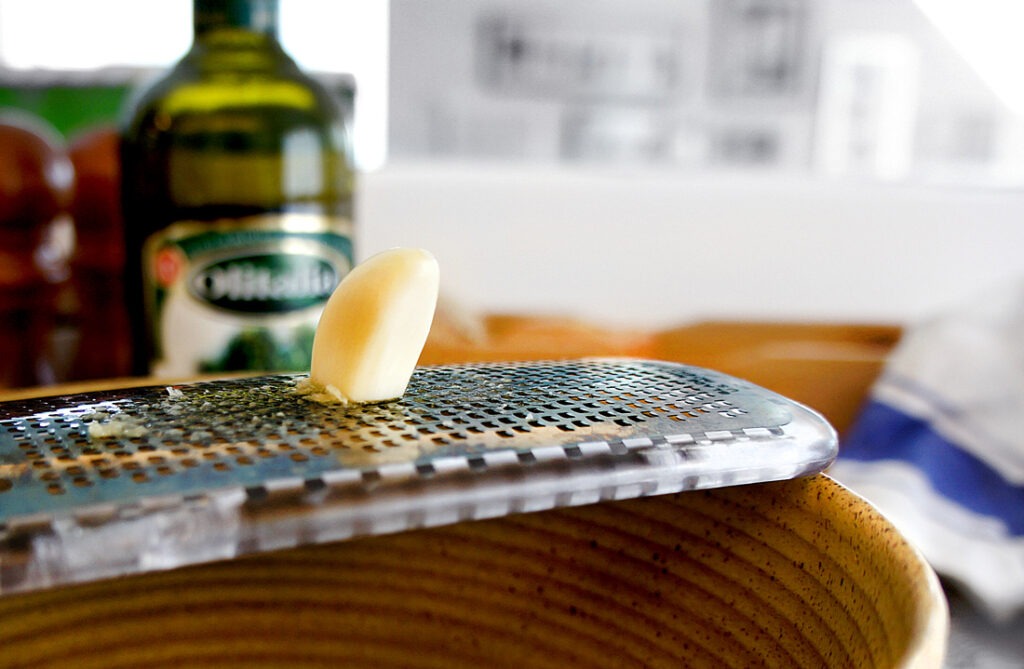 *Updates: I do so shamefully apologize for my typo…  Instead of 2 “tsp”, it should be 2 “tbsp”.  HUGE DIFFFERENCE, I know…  Sorry for the bland pepper confit on the table!!

Wash the peppers and remove the stems.  Put into a food processor, along side with 2 cloves of garlic, pulse until the peppers are chopped into rough pieces.  DO NOT over process them.  It’s not a puree.  I rather have the pieces too big than too small.  Now with a spatula, move the peppers into a sauce pot.  I wouldn’t attempt to physically touch these peppers now.  It will super charge my fingers and bring excruciating pain to whatever they may touch later, like my eyes for example.  It is pollen season…  Put the oil, fish sauce, white pepper, salt, ground peppercorn, 鸡粉 into the pot and put it on the stove on medium heat.

It will slowly bubble up.  Stir occasionally and let it stew in the pot.  The peppers will slowly lose its bright green color but the kitchen will be perfumed with incredible peppery, garlic-y aroma.  While the peppers confit in the pot, grate 2 garlic cloves on a microplane grater.  Remember, 1/8 of a clove of garlic is not worth losing a layer of skin for…

When the peppers are done confitting…  I don’t know after how long.  It depends on the pepper.  But they will lose most of their moisture and shrink in mass.  Use a spoon to check the bottom of the pot.  If there is still visible moisture, hence juice, on the bottom of the pot, keep simmering until it has all evaporated.  Add white wine vinegar then pour the hot pepper confit into the bowl with the grated garlic.  Stir and make sure the grated garlic is completely integrated into the confit.

Then, leave’em alone.  Don’t eat them now.  This is one of those things that will develop more complexity and unified flavor hours or days later in the fridge.  At least I wouldn’t eat them until they have completely cooled down to room temperature.

Steam a few peeled eggplants and smother on a whole lot of this pepper confit.  It is sublime. 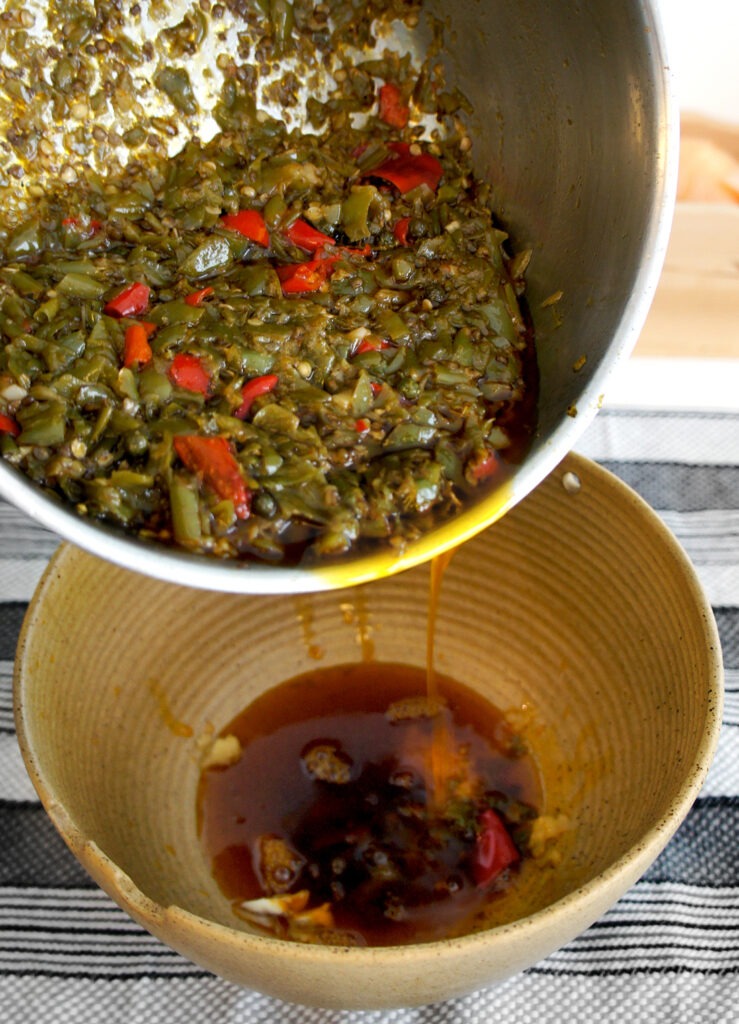 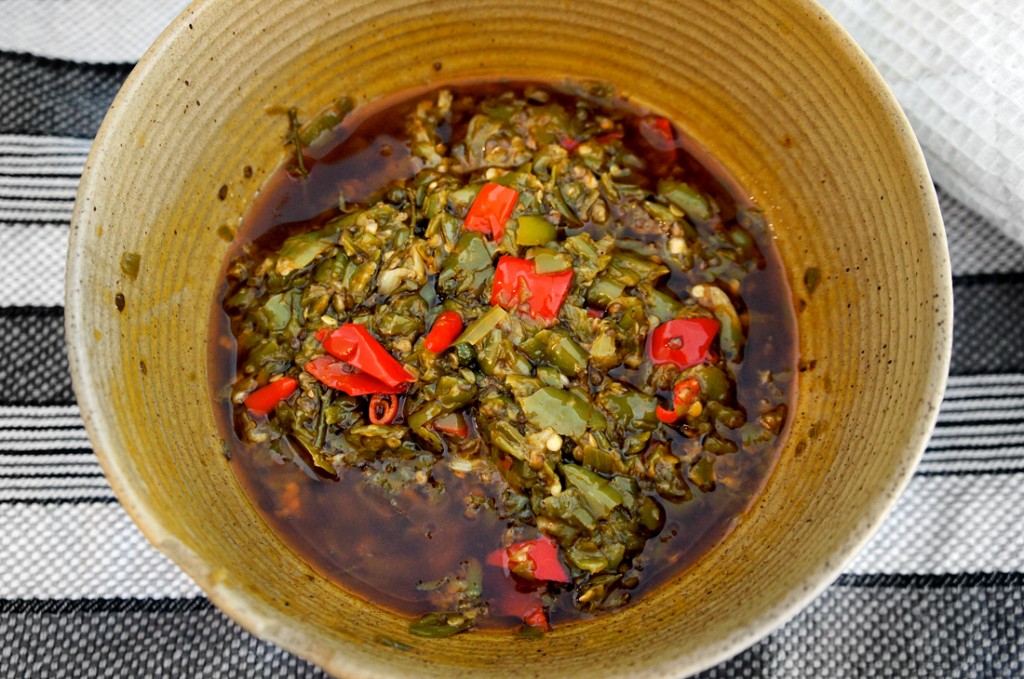