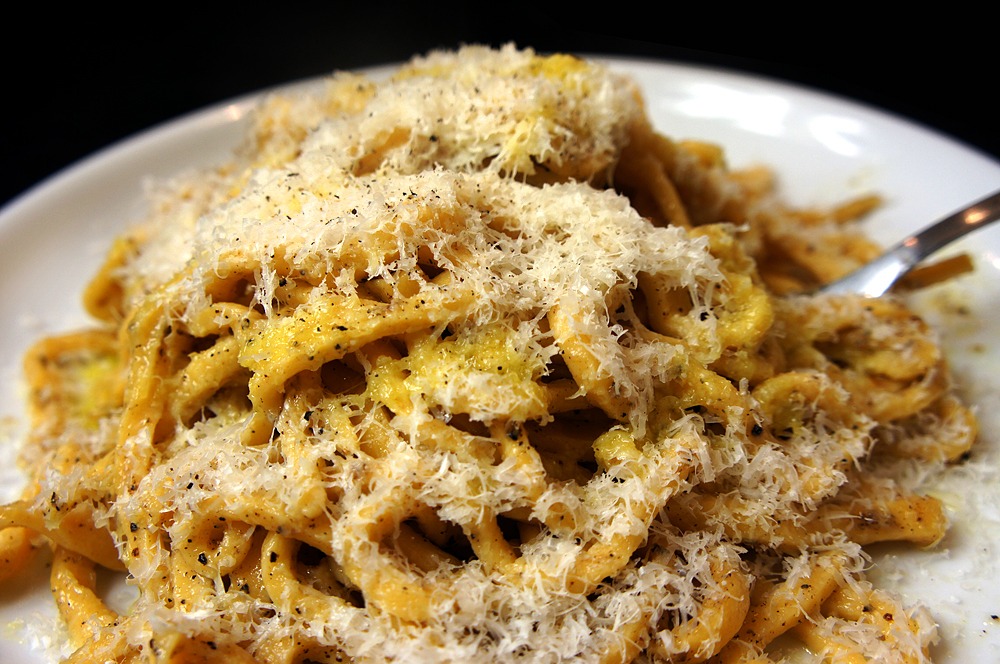 So, here it goes.

I’m going to start this story by making a confession.  I have…never been to Rome.

I forged this recipe after the Rome episode from my favorite travel channel host, Anthony Bourdain’s show, “The Layover“.  His show is one of the humble luxury I have being here, that I get to pay $20 on iTune which would otherwise be free in the US.  No no no, Slingbox doesn’t work here.  If the internet in China is personified it would be a 800 year-old granny with walking stick that is broken. 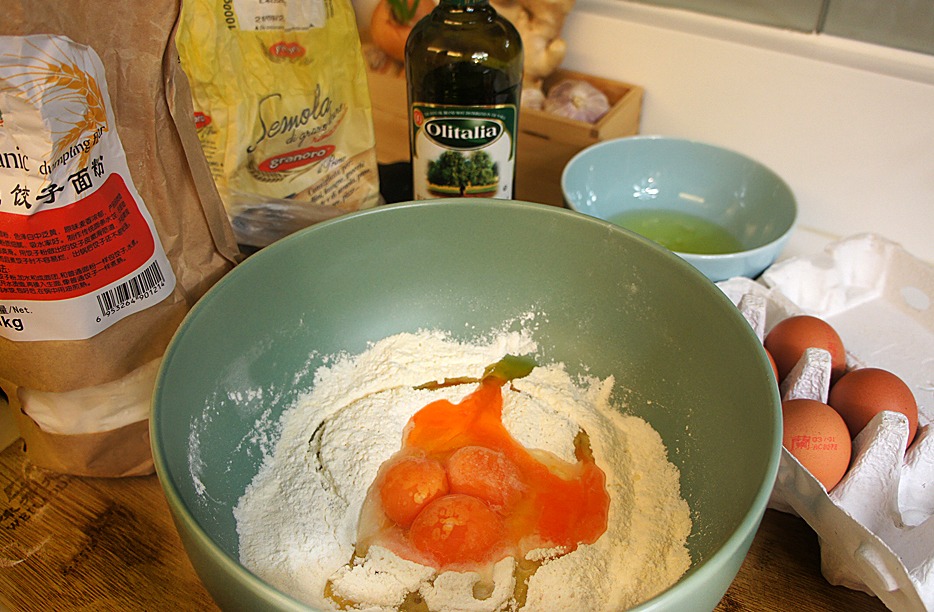 So…”Cacio e pepe”.  It’s what he’d eat if he could have one and one thing only in Rome. That’s saying a lot.  Ok I want it…so I thought, hey, I make fresh pasta (nothing else but a desperate behavior born out of residing in BJ), and I have cheese (cacio) and pepper (pepe), why Can’t I?  I’m not going to deny that it pisses me off when some chefs on TV whip out a Chinese or Taiwanese dish and call it what they think it is.  Poor dishes look so deformed, stripped naked and paraded on national television.  So if anyone is a living expert on the Roman cuisine, feel free to leave a nasty comment if this seriously violates your belief. 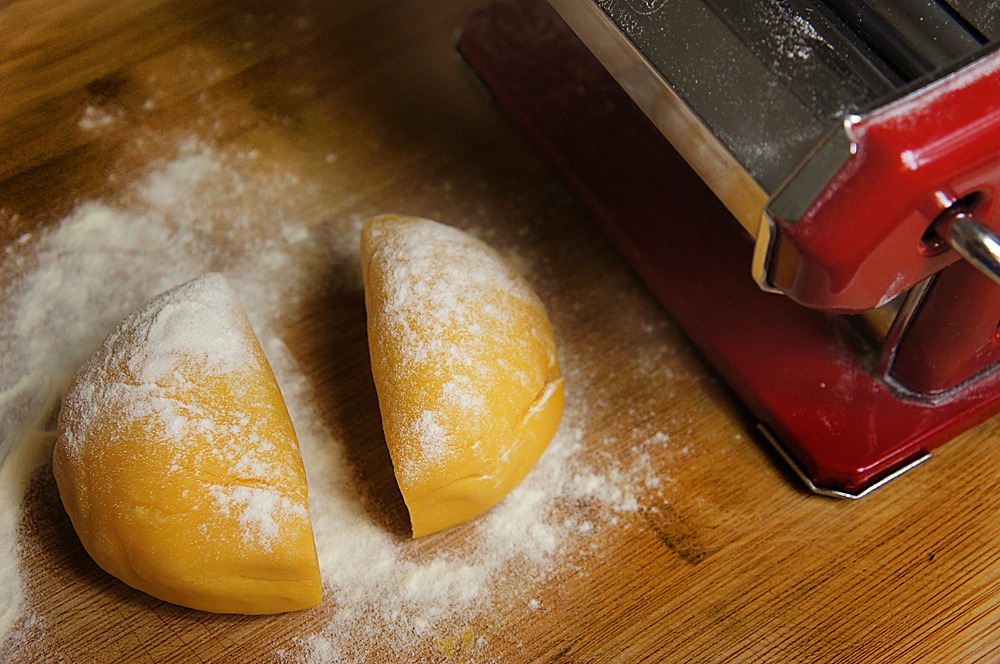 Now, let me talk Pasta.  Who makes their own pasta besides Italian grandmas?  What kind of sick, snobbish, pretentious behavior is this when there’s good fresh pasta laying in markets around the corner and perfectly adequate Italian restaurant in every neighborhood?  Yes, that is true.  IF I were still in New York.  Beijing?  HA! right.  Here I am making my own fresh pasta and that is pretty much all the options I have.  And who are those relentless liars who says pasta making is easy and that everyone should do it themselves.  It is nothing short of a labor of love.  But if good fresh tonnarelli (squared version of spaghetti) or fresh spaghetti is conveniently available to anyone out there, by all means use that.  Won’t hurt my feelings.  Although I will admit that I have a little sickness in me, and get a kick out of conquering a labor intensive dish, fresh ravioli or deboning a duck.  You know, little things like that.  The plus side is, I did gain some knowledge after my several trials and errors.  Of course, just like any authentic cuisine, it just doesn’t taste the same outside of its origin.  Maybe it’s the water, the flour, the air…the wrinkles on an Italian grandma’s hand…I don’t know.  So I don’t expect this to be the same.  I just hope it’s a decent quench for my thirst. 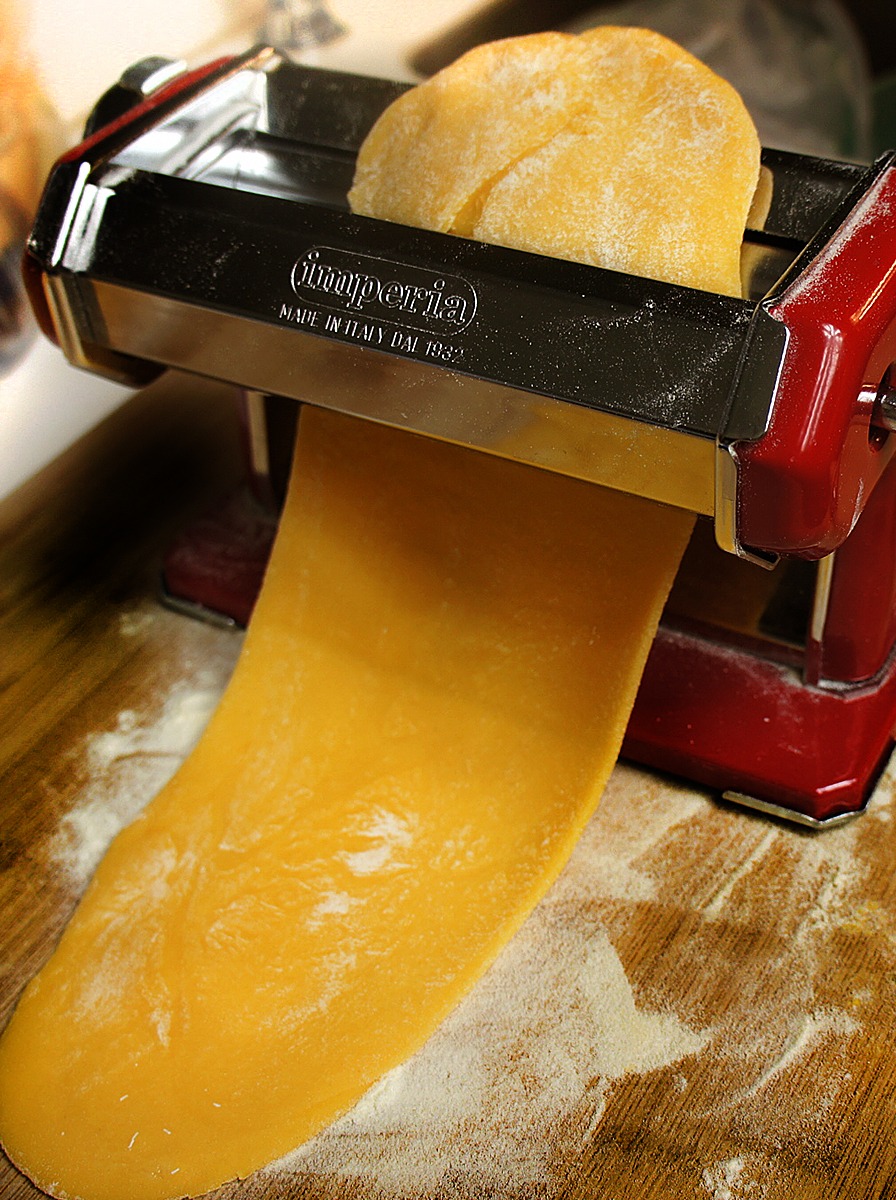 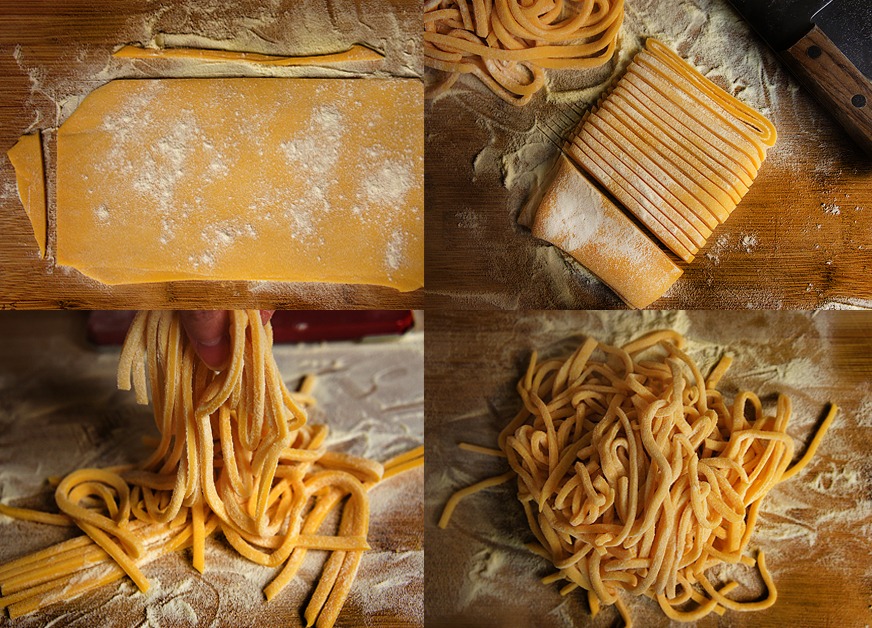 Pasta comes in different shapes and sizes (duh).  But there are also different formulas that few recipes take note of.  With or without eggs, with semolina or normal flours, or with both.  Many newly updated cookbooks mention the elusive “Tipo 00” Italian flour. It isn’t some mysterious Italian wheat.  The number “00” means the finest grind.  It is an almost powdery-like flour that absorbs the moisture of the wet ingredient very well. I can find tipo 00 flour here in BJ, but it’s expensive.  Import tax is a bitch.  I thought to myself, there’s NO way that BJ, NORTHERN CHIINA, the notoooorious LAND OF THE NOOOODLES, that a beautiful gluten-rich flour would be out of reach!  I vowed to find a substitute.  What I found is called “饺子粉” (Asian dumpling flour).  It has a higher gluten content than an all-purpose or pastry flour, which puts the chew in the noodle.  It is very finely ground which yields a smooth texture.  I’ve tried both tipo 00 and 饺子粉, and I’m going to go on record and say that it’s an acceptable substitute.  So my story today involves my discovery of using both 饺子粉 and semolina.  Semolina is a durum wheat flour that is coarse, has a yellowish hue and an even higher gluten content than everyday flours.  It’s also good for dusting the dough because it doesn’t get absorbed that easily.

On wet ingredients, the rule of thumb I made up for fresh pasta dough is:

* When making thinner pasta (like tortellini or fazzoletti), use higher ratio of eggs/egg whites in the wet ingredient, and lower ratio of semolina  in the dry ingredient.  Get it?

The point here is the egg white.  It gives the pasta more bite.  “Bite”, not “chew”.  When your pasta is thin, more “bite” is  needed otherwise it’s just mushy.  But if the pasta is thick and chubby, then too much “bite” becomes “tough/rubbery”.  By taking out the egg white in the wet ingredient and use water instead, one can achieve a chewier dough and still retain the color and flavor from the yolk.

Ok, enough gibberish.  Let’s do this. 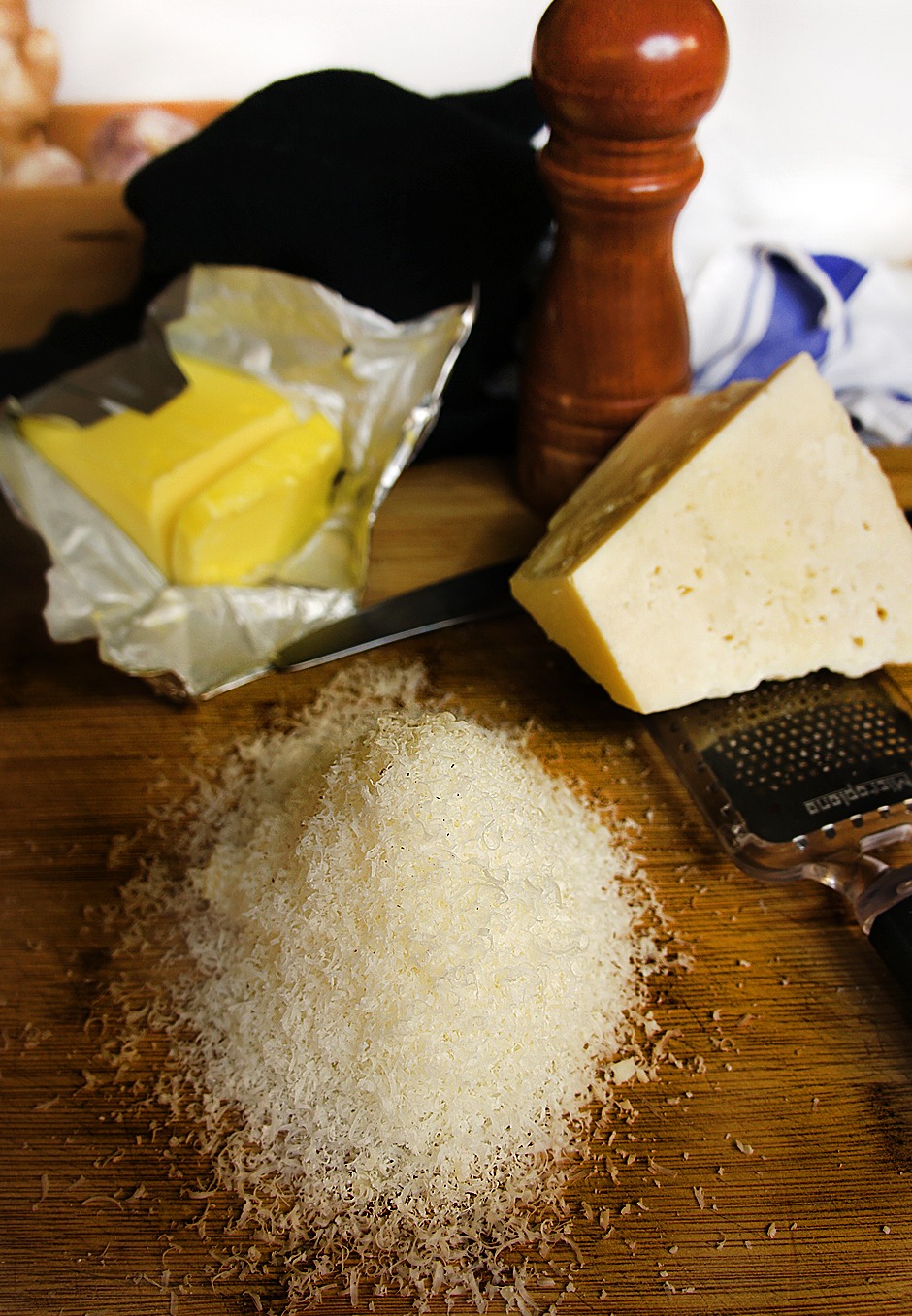 PS: please go to my About page regarding my measurements.

Serving: 2 appetizers or 1 big entree if you are lonely. 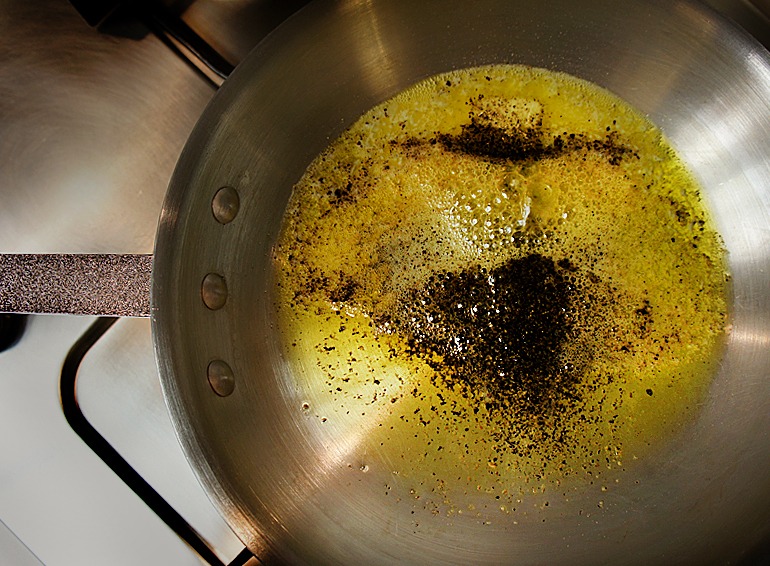 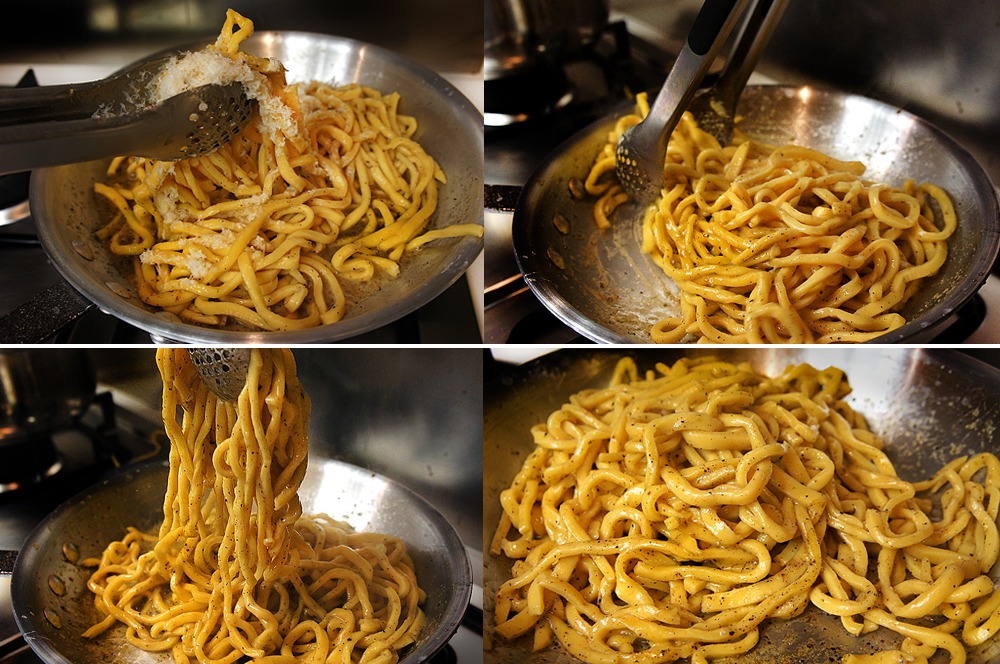 To make the pasta dough.  Grab a bowl big enough to hold all the flour and still leave enough elbow room.  Make a little dent in the center and add 3 egg yolks in the middle. I mean REAL egg yolks, ORANGE egg yolks.  You’ve never had an egg until you’ve had an orange one.  Yellow yolk is a bad yolk in terms of flavor.  I’m an egg snob and I need orange egg yolks.  Drop a pinch of salt, a tsp of olive oil (optional) and start mixing the yolks and the flour together.  While mixing, add tsp by tsp of cold water into the dough until it starts to come together.  It should be slightly sticky but workable. Transfer it to the counter top and start kneading it for 10 minutes.  Now, there’s no easy way out of this.  If  I don’t break a sweat during these 10 minutes, I know I’m not doing it right.  The dough should become silky smooth.  It should be semi-soft and pliable, not dense or dry.  Plastic wrap it and let it rest in the fridge for 30 min, during which the gluten will relax and not re-track when it’s rolled out.

After it’s rested, split the dough in half, flour the work surface, take out a pasta machine and set it on the thickest increment.  Run the dough through the pasta machine a few times until a smooth, relatively rectangular shaped dough is formed.  This may take a little practice since the dough tends to get deformed running through the machine. Move onto the next/thinner increment and roll the dough through it once.  Every pasta machine is different but I get the thickness I want on the third increments on my machine.  Flour the dough generously, fold it in half in length, and then half again.  Use the longest knife you have and cut the dough in the same increment as its thickness so you will have a squared noodle .  Repeat that with the other half of the dough.  I hope you are relieved to hear that most of the work is done at this point.

To finish, bring a big pot of water to boil, add a big pinch of salt like… 3 tbsp.  It should be like sea water.  While waiting for the water to boil, heat up a saute pan, drop in the butter, olive oil and black pepper and let the pepper toast in the oil and the butter brown up but not burn.  Turn off the heat and wait for the pasta.  The water should be boiling by now.  Drop the pasta and loosen them up in the water and cook for like….don’t quote me on this…maybe 3 to 5 min.  I mean you’ll see them float to the top and I always check the done-ness by tasting one, not timing it.  They should be ALMOST cooked but not.  An important detail in cooking pasta is that the pasta should always finish cooking in the sauce it’s going to be served in.  Warm up the saute pan and transfer the pasta over with a tong.  It should sizzle a little, and don’t bother draining the cooking water.  You NEED the starchy pasta water in the pan to form a sauce.  How much?  eh..maybe 1 or 2 tbsp.  Now add the pecorino romano and toss.  If you are really good at flipping the pan, do that.  Me, I stick with tongs.  When the water, oil, and cheese starts to come together into an emulsion, you should have a glistening sheen coating the pasta.  The liquid should be all absorbed.  The salt in the cooking water and cheese should give the dish enough saltiness, but taste before plating if you’re in doubt.

Transfer the pasta into a WARM plate or bowl.  Bombard it with more pecorino romano and a drizzle of olive oil.  Pig out.