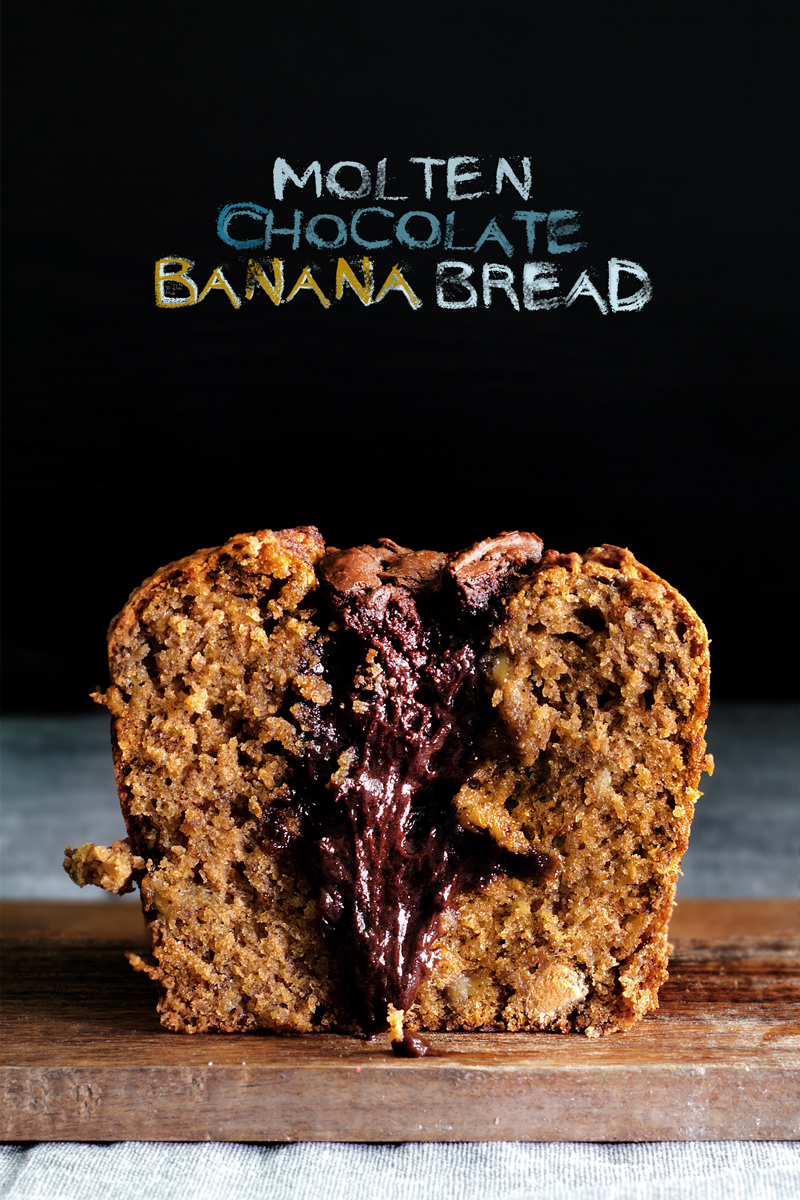 February 3, 2014 In All recipes, Bakery/Pastry, Sweets 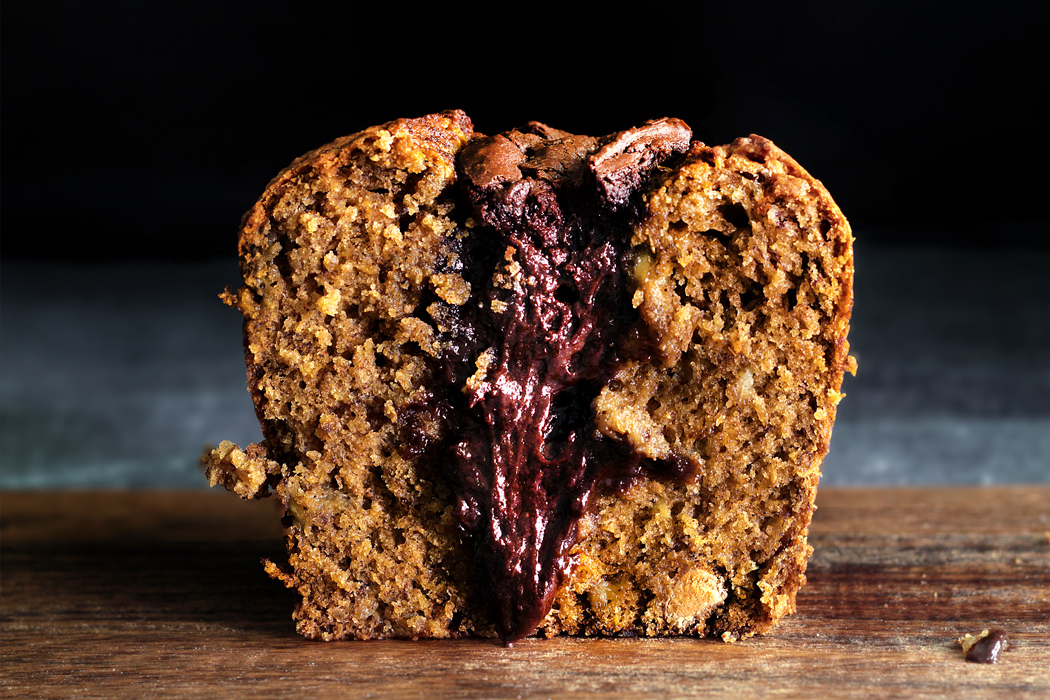 “CHOCO RIVER… WIDER THAN A MILE”

Today is the third day of the week-long CNY holiday in China, a festive time when binge-eating isn’t only allowed, but mandatory.  Implementing any calorie restriction and self-control during this high festivity, implies unlikable things about one person – uptight, fun-less, possibly anorexic and most of all, non-cool.  So to celebrate such excess in order to demonstrate that I’m a spirited team-player who’s got some very down-to-earth thighs to prove it, I was going to show my A-game compliance.  Only until I realized that it’s a little tricky to come up with things to eat…

When I’m under some sorta house arrest. 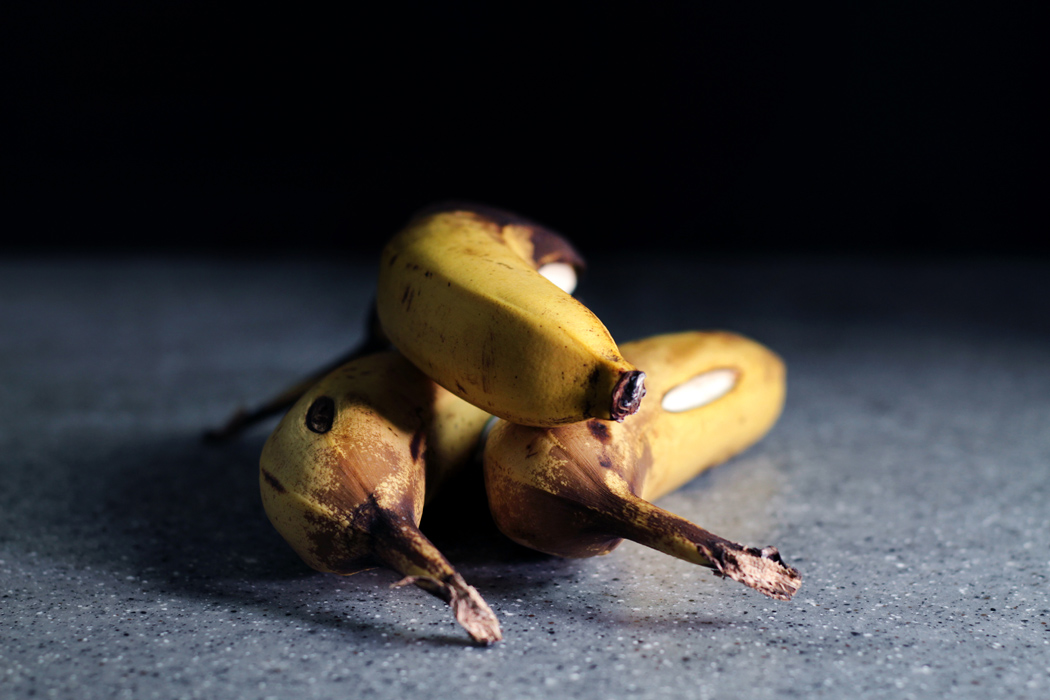 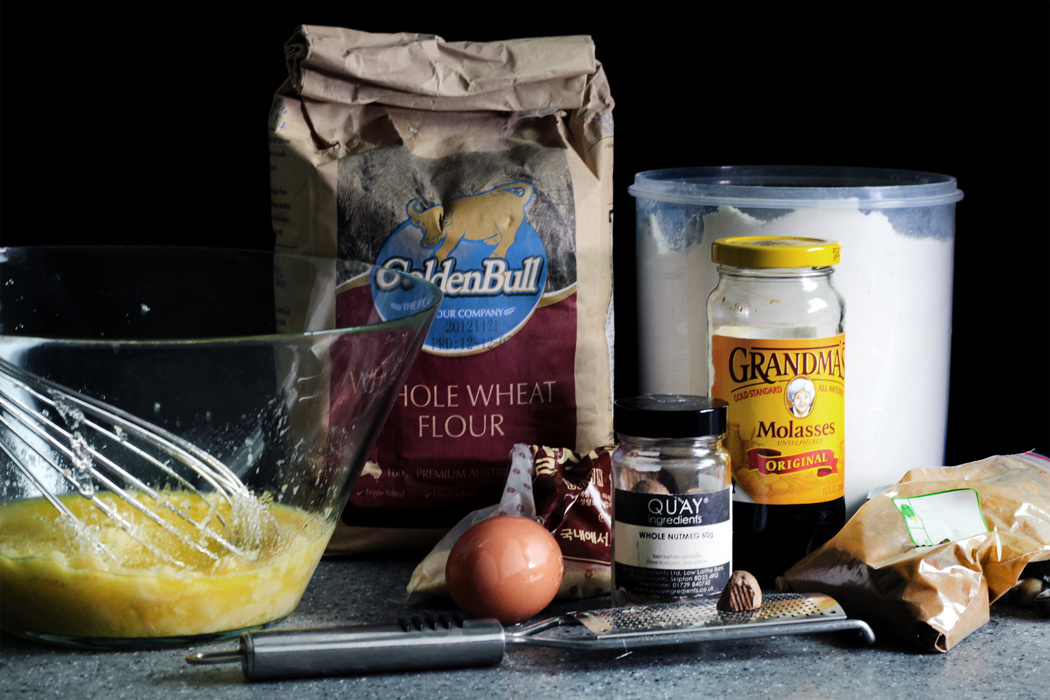 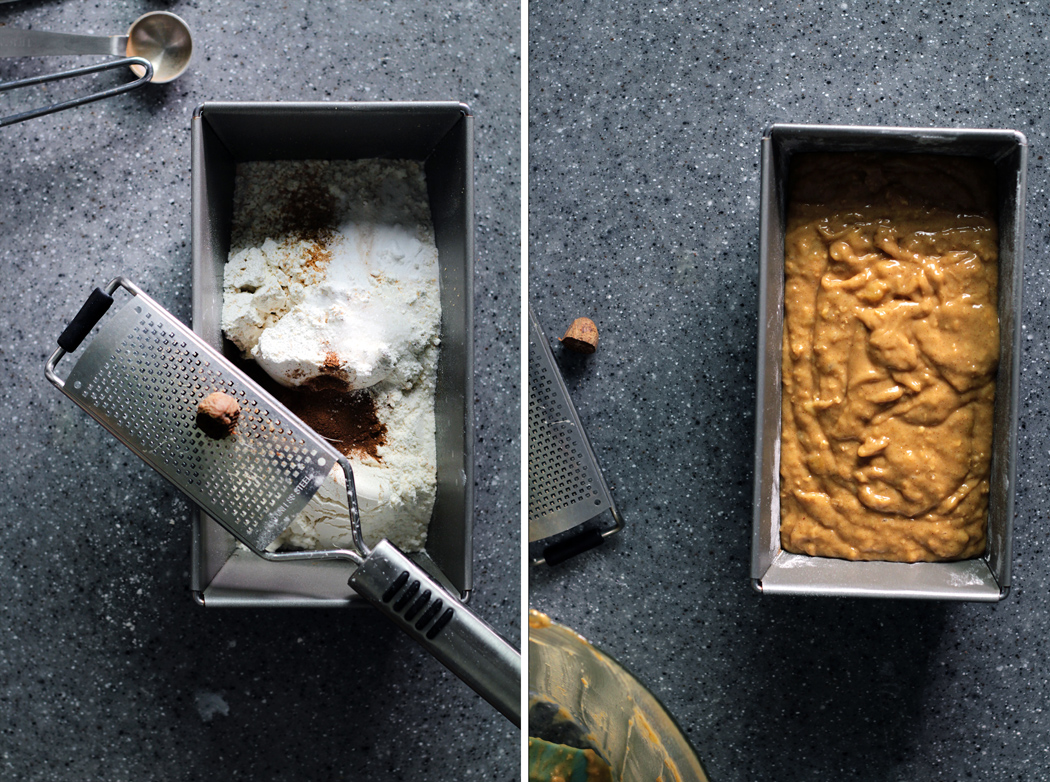 You see, the thing is, I can’t leave the apartment.  I can’t leave the apartment for the same reason why you shouldn’t leave a pot of bubbling caramel unattended.  My dog-son is now a pot of bubbling caramel, and it’s been three weeks since I stepped outside this watch-zone for things that didn’t come from a veterinarian pharmacy.  Those sticky ribs were the last sword I drew from my previously well-stocked Kingdom that was losing armory at an alarming speed, which almost prompted me to start a new series called Guess What’s This Under An Inch of Frost, or What My Ailing Dog Wouldn’t Eat But You Might, or how about A Blind Date with Expiration Dates.

Aaaahh, but then of course.  The top reason why any city-dwellers love where they dwell.  The absolutely knight-shinning quality of… the 24hr corner grocery store.  Yeah sure, I have one of those, too, and just like any others, my corner grocery is good for only two things.  Alcohol.  And over-ripen bananas. 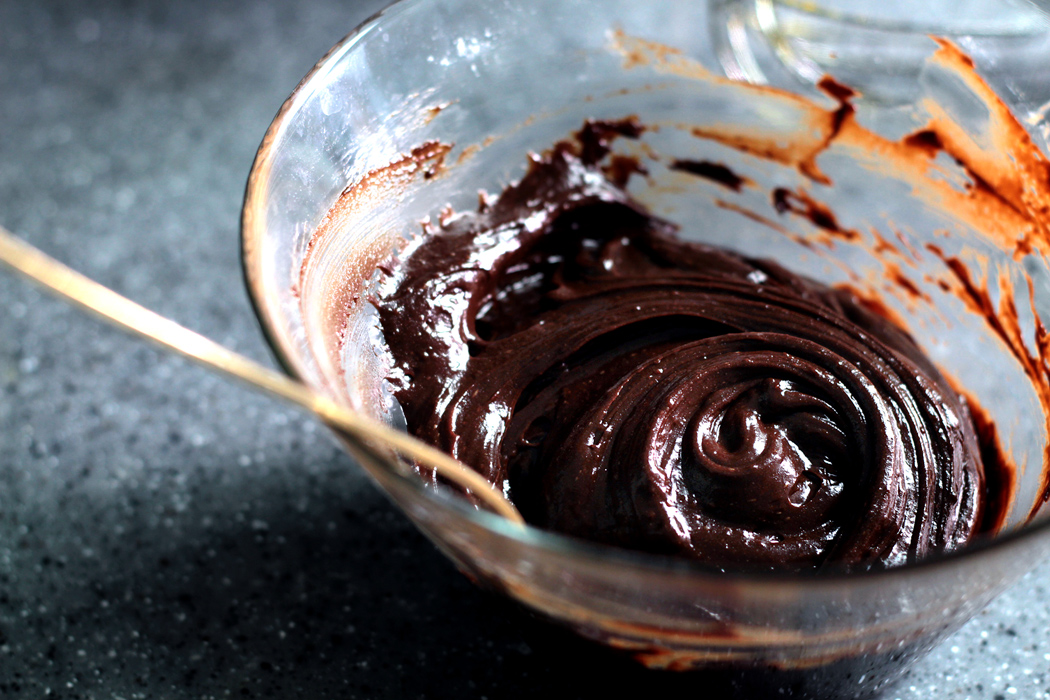 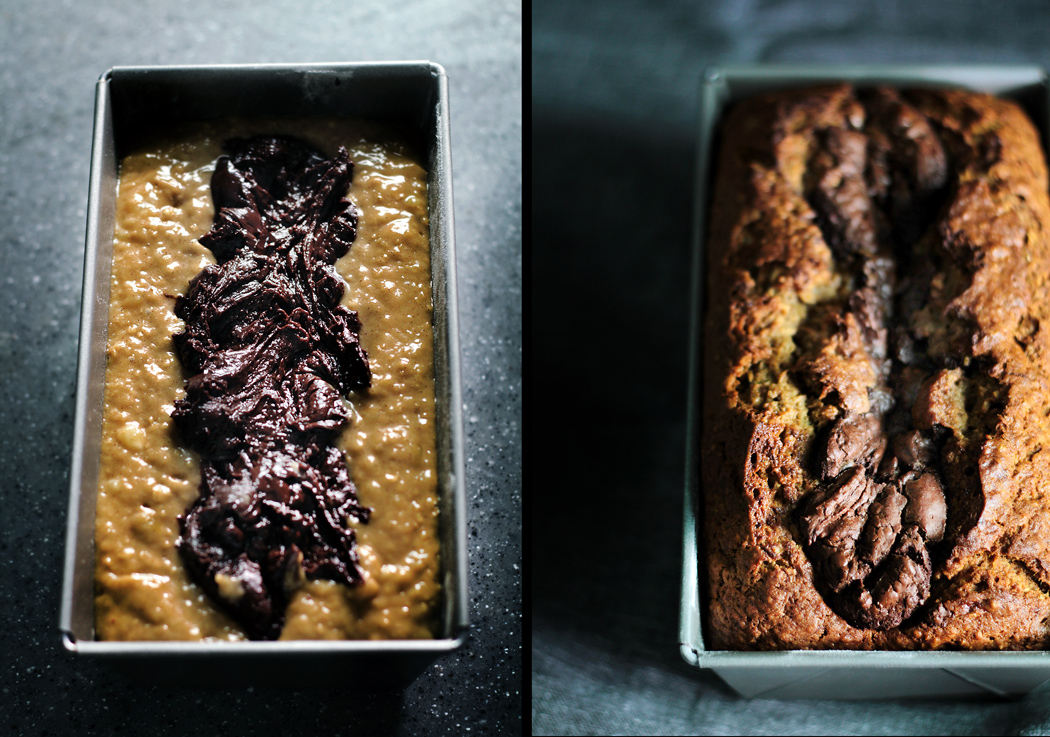 So I got six bananas, so three of those could carry the extra streusels left from these muffin French toasts (you heard right) in the form of banana bread.  And it did the job well, it did, never gonna make a post.  But there left the three extra over-ripen bananas on the counter on their way to be crowned The Lord of the Fruit Flies in my falling Kingdom, and out of the corner of my eyes, laid quietly was the beauty of a bar of chocolate tucked behind the coffee machine, almost forgotten by time itself.

I know I know, bananas and chocolate… pfff… hardly any ground-shattering pairings there, I mean they’ve already had so much unlawful sex together it’s scandalous.  But I don’t want just chopped chocolates in my banana bread.  I want… a banana bread that comes with its own chocolate sauce!  Sauce, sauce… the world molten came to mind.  And really though, why not?  They need to spice things up a bit.  They need to make illegitimate royal babies!  And… violà.

There’s a river… running through my banana bread, a choco river… wider than a mile.  I knew I’d cross you in style someday…  Listen, there’s a ridiculous amount, almost too much molten chocolate-lava moving slowly inside this supposedly rustic cake, only, if only, there’s such a thing as “too much chocolate” in your world or HA! I’m just talking crazy.  And even though it’s absolutely unnatural not to eat this cake warm out of the oven, the chocolate-lava never really solidifies even when it’s cooled, making it kind of a thick/super rich chocolate ganache-filling right in the center of this unseemly banana bread.  Is that offending anybody here?

Well then you’re not getting a slice. 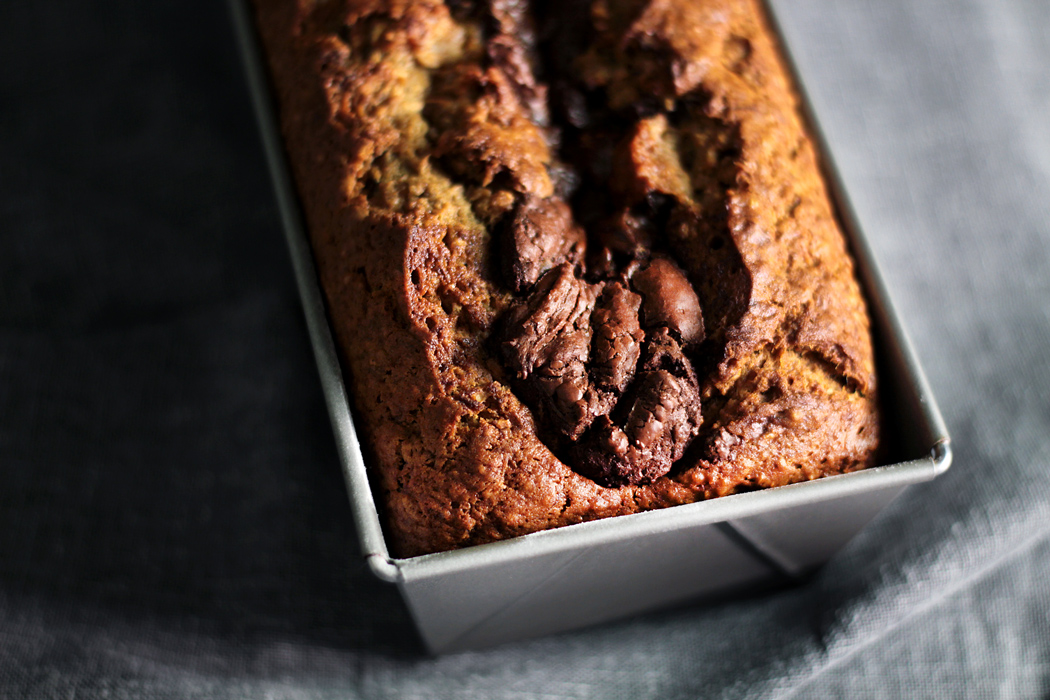 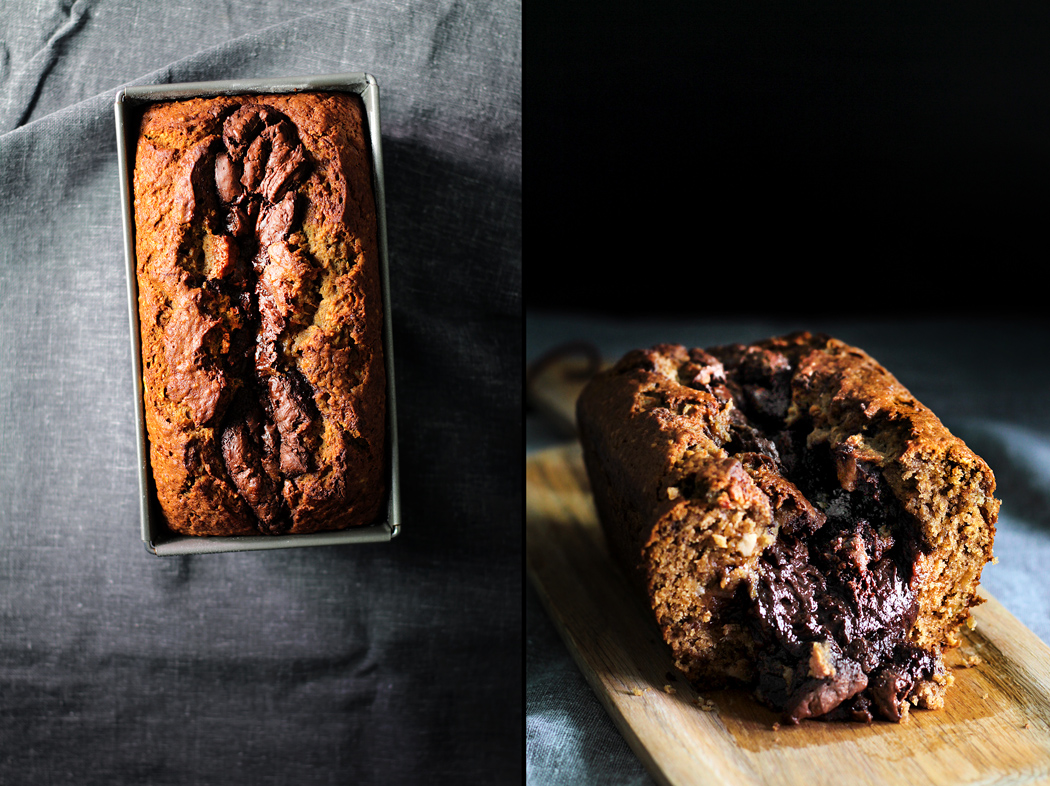 I used a combination of wholewheat flour and cake flour because I ran out of all-purpose, a little accidental conscience…  But you may use other whole-grain combination that you prefer.  And also I prefer a combination of unsalted butter and vegetable oil to reach a balance of flavour and moisture.  But if you want to use all butter, not gonna hurt my feelings…

I suspect that these would be fabulous in individual muffin-size as well if you don’t mind the dividing.  The baking-temperature should probably be increased to 375ºF/190ºC, and the baking-time shortened down to 25~30 min.  Just a thought.

To make the molten chocolate center:  Add the chopped bittersweet chocolate and unsalted butter into a microwave-proof bowl.  Microwave on high on a 30 seconds-interval and stir in between, about 1 min in total, until the chocolate has just melted but not scolded, then whisk in the flour until very smooth.  In another bowl, whisk the large egg and powdered sugar until foamy, then add to the chocolate mixture and fold it in until evenly incorporated.  Cover with plastic wrap and chill in the fridge for 20 min (easier to work with when firmed up) while preparing the banana bread.

Add the unsalted butter and vegetable in a large microwave-proof bowl.  Microwave on high for 30 seconds and whisk the warmed up mixture until the butter has completely melted (if the butter is still too cold to melt, microwave for another 10 seconds).  Break the bananas in pieces and mash them into the melted butter with the tip of the whisk until very little lumps are left.  Whisk in the large egg, light brown sugar, molasses and vanilla extract until smooth and thick.  (To spare using an extra bowl) Whisk wholewheat flour, cake flour (or all-purpose), baking soda, ground cinnamon, grated nutmeg and salt inside the loaf-pan that you’re baking with.  Then add the dry ingredients into the banana/butter mixture, and slowly fold the batter together with a fork until just evenly combined, but not over-worked.

Let it cool for 15 min in the pan before removing.  I may have made the mistake of cutting it too soon (can you blame me?) and the I had a chocolate-river situation… sort of.

If not serving immediately, warm up each slice in the microwave for 15~20 seconds.  Dont’ worry, the chocolate center will not set, but it’s just better to eat when it’s hot… 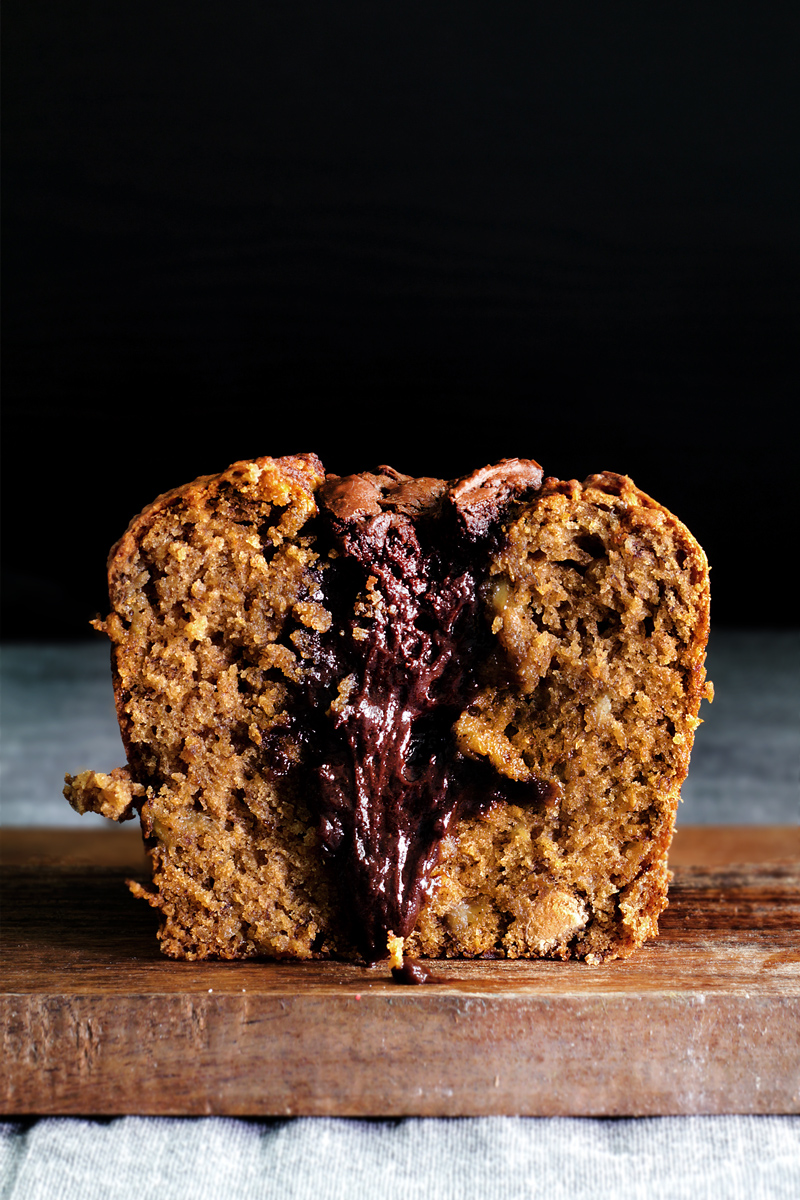 THAI HERBS AND PORK SALAD
Salted Duck Yolks Cookies
HOW TO EASILY SOUS-VIDE IN OVEN, WITH OR WITHOUT WATER