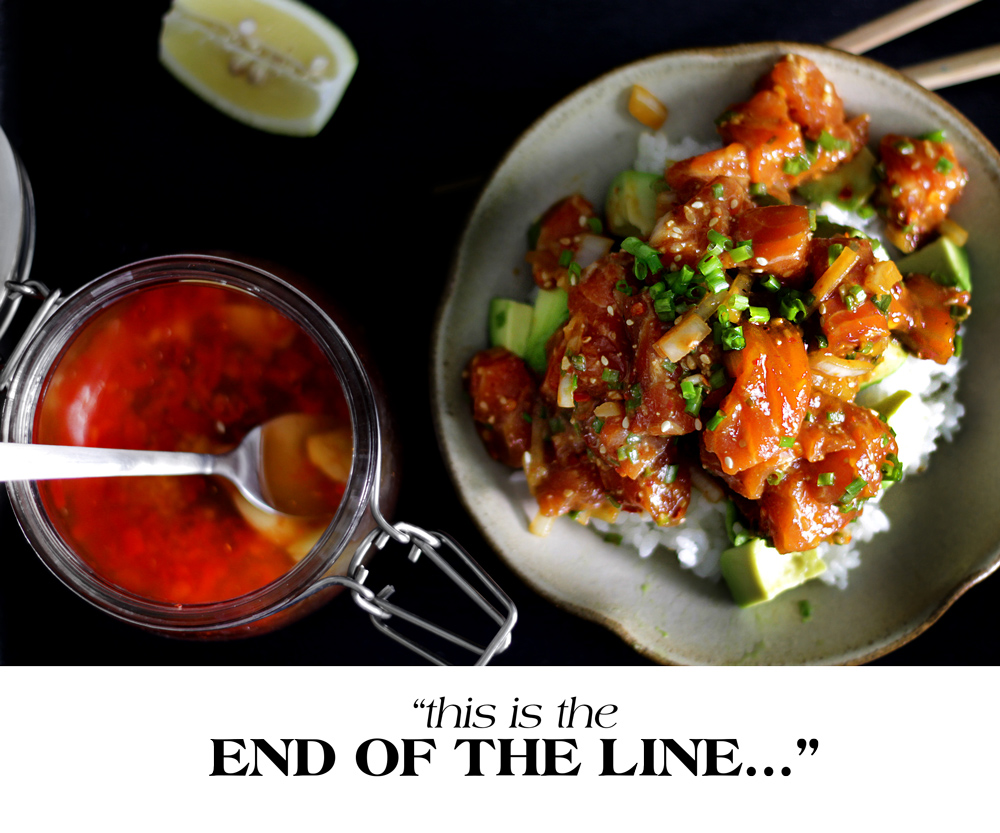 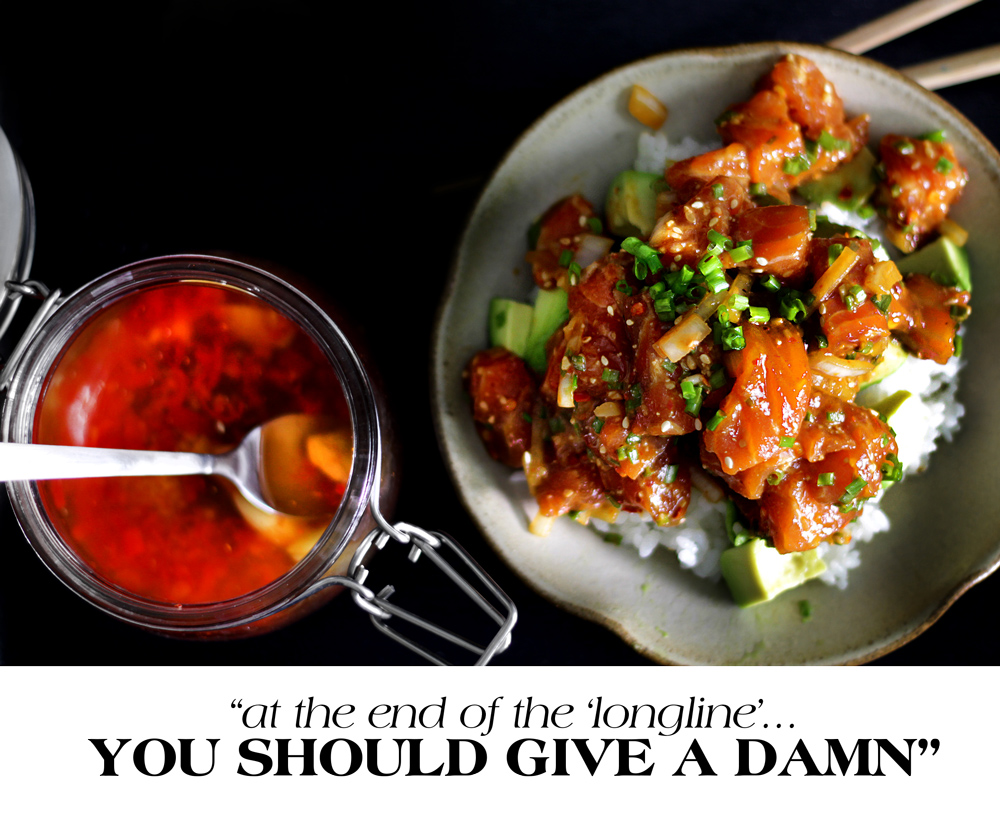 Two weeks ago when I stood in front of the ordering-counter in the most celebrated poke (a Hawaiian appetizer mostly made with raw seafood and other seasonings) joint in Honolulu, I found myself deep, once again, in a familiar dilemma.  I could on one hand, dig through the baffling complicatedness for the source of the tuna without certainty on any given answers which would probably result in an ill-informed purchase anyways, or, I could entirely forgo the option of tuna as a food source just as I’ve been doing for quite awhile now.  After all, I hadn’t tasted a bite of tuna, raw, cooked or canned for let’s say… almost 3 years. 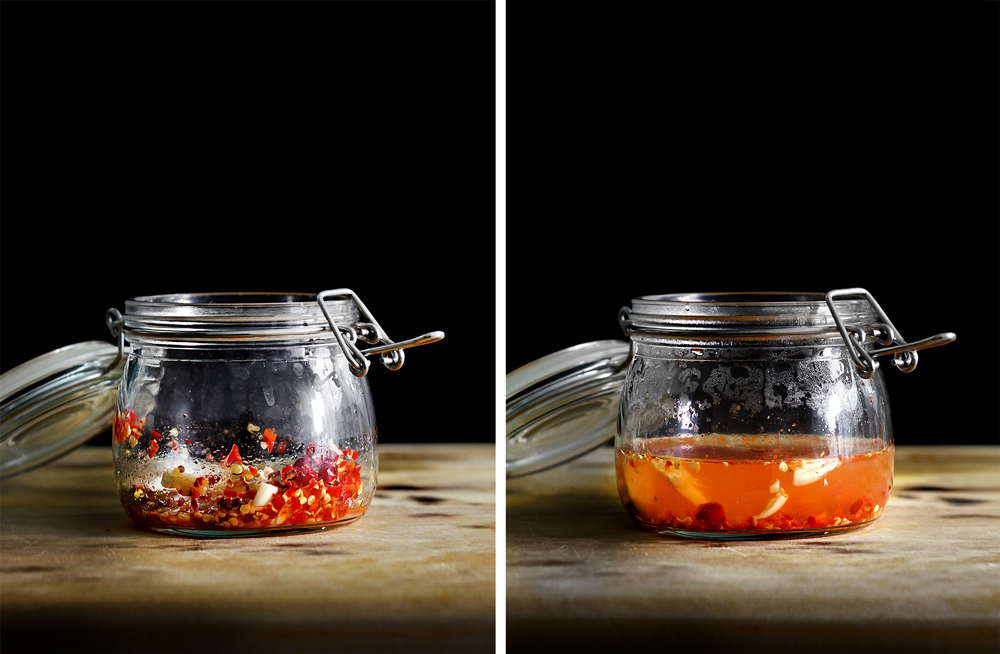 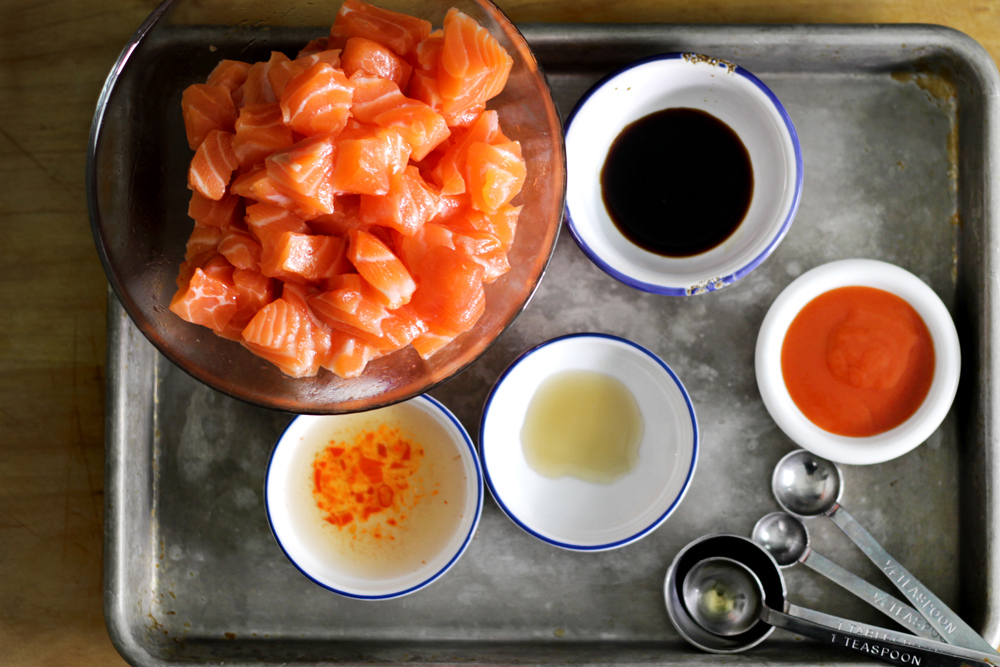 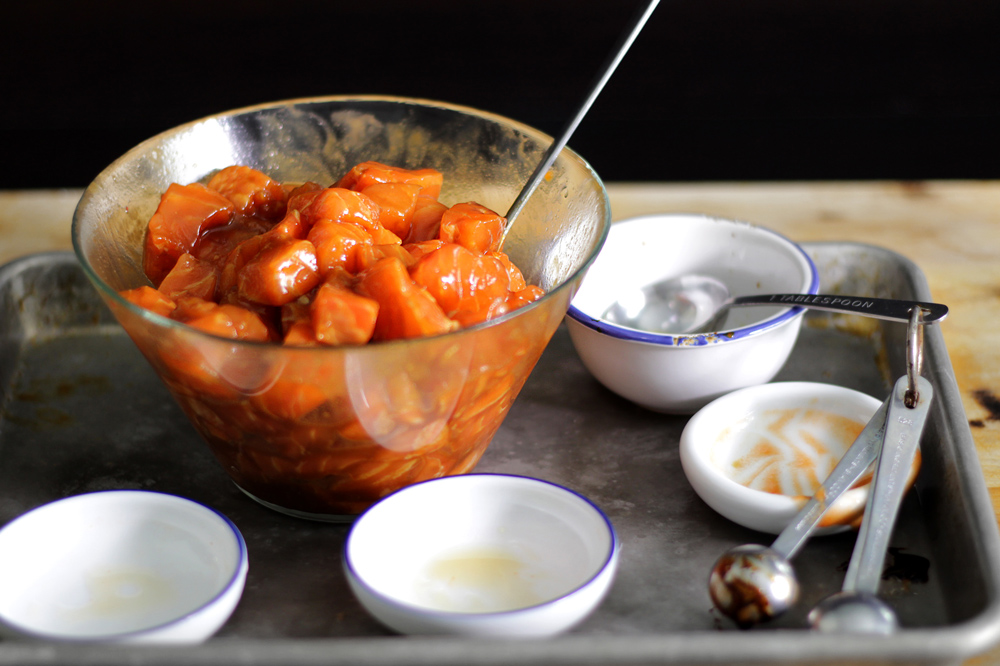 The incentive is simple – beyond animal welfare or even the fear for environmental impact – that goes… I like tuna.  And would like more to eat in the future if possible.  Should I say chewing my way through a specie to the brink of extinction isn’t how I would like to be remembered going down.

We should, or at least I hope, be genetically and socially more advanced than locusts.

An idea so seemingly intuitive that it’s mind-boggling it isn’t shared by most.  That being said, my internal tuna-war isn’t as straight-forward as it sounds.  Unlike an hypothetically obvious STOP sign on say, a whole roasted panda or I don’t know… wild tiger tenderloin, the choice being made on what should be considered “responsible” tuna comes with brain-batting confusion.  There are the different species of tuna, regions where they are caught and most importantly HOW they’re caught, all of which boils down to to a few beyond-basic guides that are too confusing to be reinforced by most.  So for the sake of simplicity and sanity, in a world that now transport tunas across the furthest regions from one another without an unified consensus and regulations on how they come about, I just decided to veto tuna entirely. 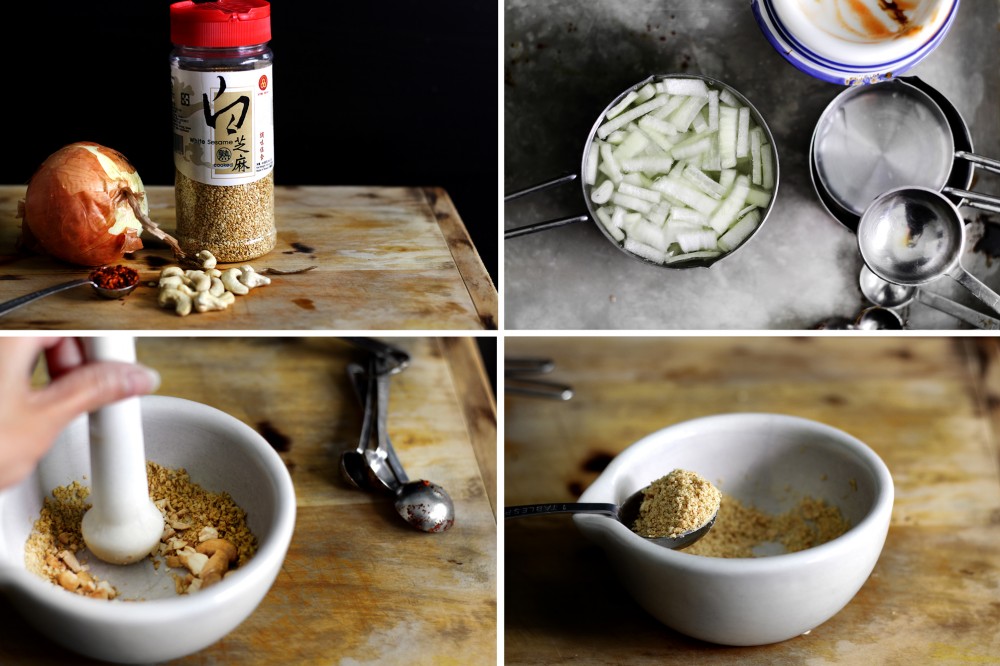 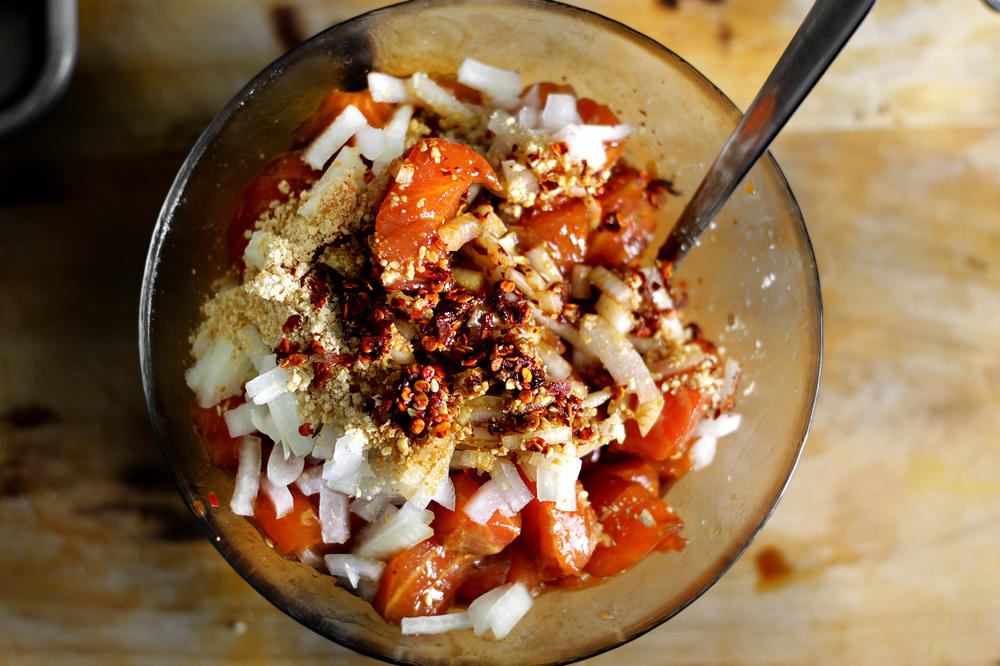 But that day, I caved.  Without any other choices of fish they offered, we acted upon an unspoken unison of guilt and shared an order of ahi/yellowfin tuna shoyu poke, by then without the ease of knowing that Hawaiian ahi/yellowfin tunas (a relatively less threatened specie) are mostly caught in a regulated sustainable method, a peace-of-mind that came long after this trip from an online research.  It was a fortunate coincidence and not of conscious choice, and now that we’re back, a dumb luck that I would definitely not run into in the biggest country in the world that doesn’t give a Chinese shit about food sustainability.  To recreate the poke-experience, an extremely delicious one at that, I used a different choice of fish.

Should you do the same?  The answer, along with the process that will get you there, isn’t easy, transparent, or even without contradiction.  But at the end of the longline, with a shot at the juvenile hope for any change in this world, you should first give a damn. 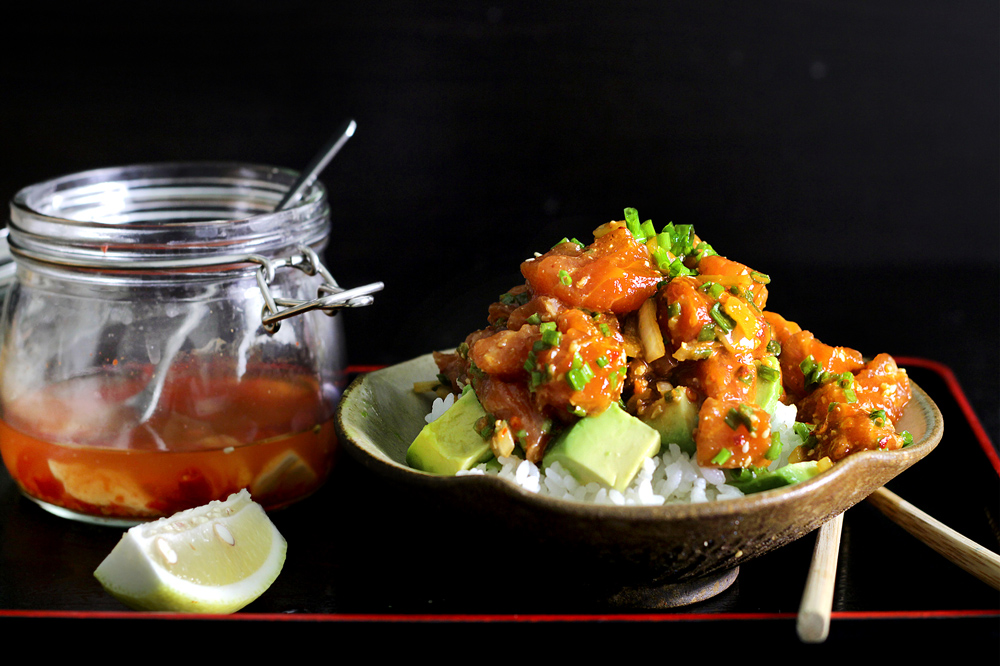 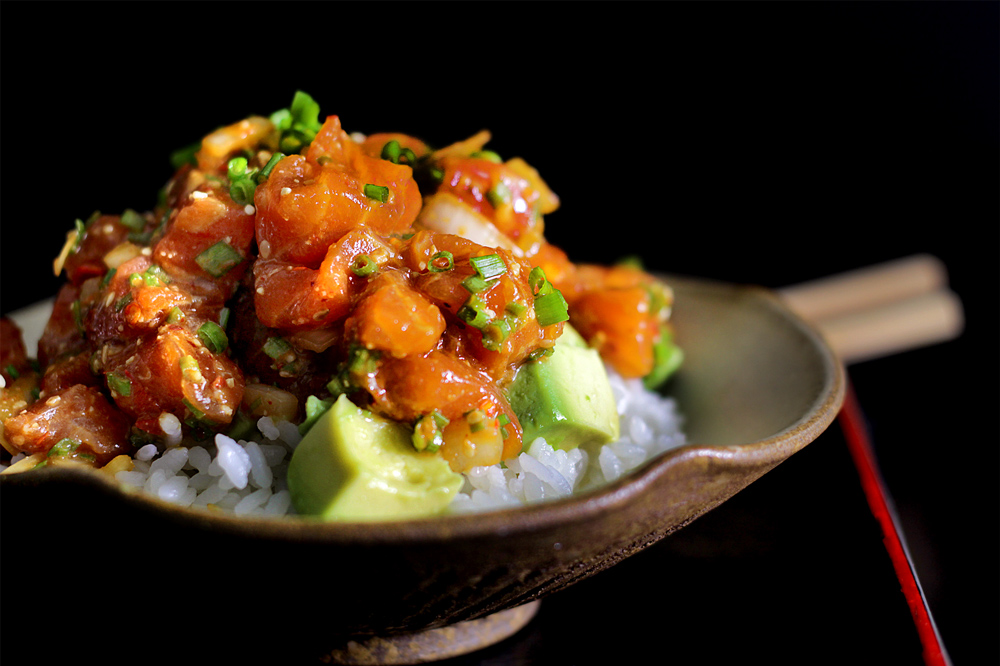 Traditionally, Hawaii-style poke is made of ahi/yellowfin tuna (not salmon), limu (a type of fresh seaweed) and ground kukui (candlenuts).  I couldn’t.  Get any of those things.  But it turns out, I don’t miss the seaweed all that much and cashew (or macadamia nuts) is an excellent substitute of kukui nuts.  Salmon (although has its fair share of controversy, but a relatively benign alternative), of course tastes entirely different from ahi tuna but I don’t know if you have heard, the tuna-community worldwide direly needs a breather from our suffocating love/appetite.  Unless you are certain of the ahi tuna coming from a sustainable source (troll or pole-caught), don’t buy it.  Eat responsibly.

To make the chili and garlic water:  Finely mince the red chili and add it into a jar with chili flakes, smashed garlic, salt and rice vinegar.  Mix evenly and let sit for 10 min.  Bring 1/2 cup of water to boil, then pour it into the jar.  Let the mixture sit at room-temperature for 2 ~ 3 hours before using.

To make the salmon poke:  Cube the salmon into bit-size chunks and place in a large bowl.  Add soy sauce, chili and garlic water, sirracha sauce and sesame oil.  Mix evenly then cover with plastic wrap.  Chill in the fridge to marinate for 30 min.

Finely slice the onions and cut into short segments.  Soak in cold water for 5 min to reduce the sharpness of raw onions, then drain the water off completely.  Pound and grind toasted sesame seeds and roasted cashews in a stone-mortar into a coarse powder-consistency.  Take the marinated salmon out of the fridge and add the onions, ground sesame/cashew, chili flakes, soy sauce (Depending on the saltiness of the brand, you may need to add more/less to adjust to taste.  Poke is supposed to be on the saltier side to go with rice.), sesame oil and chili/garlic water.  Mix evenly and chill in the fridge for another hour.

Right before serving, mix in the diced scallion and sprinkle with toasted sesame seeds.  Serve the salmon poke over warm steamed rice and diced avocado.  Drizzle with more chili/garlic water for more kicks. 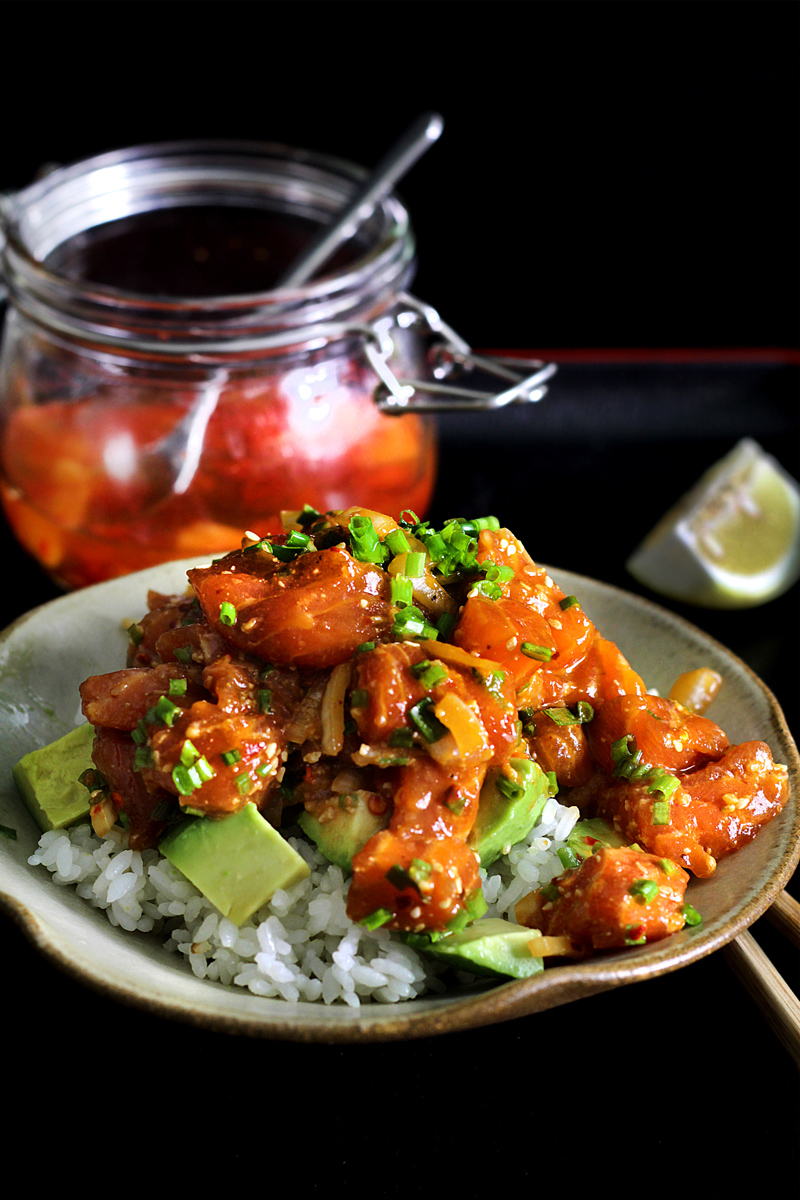