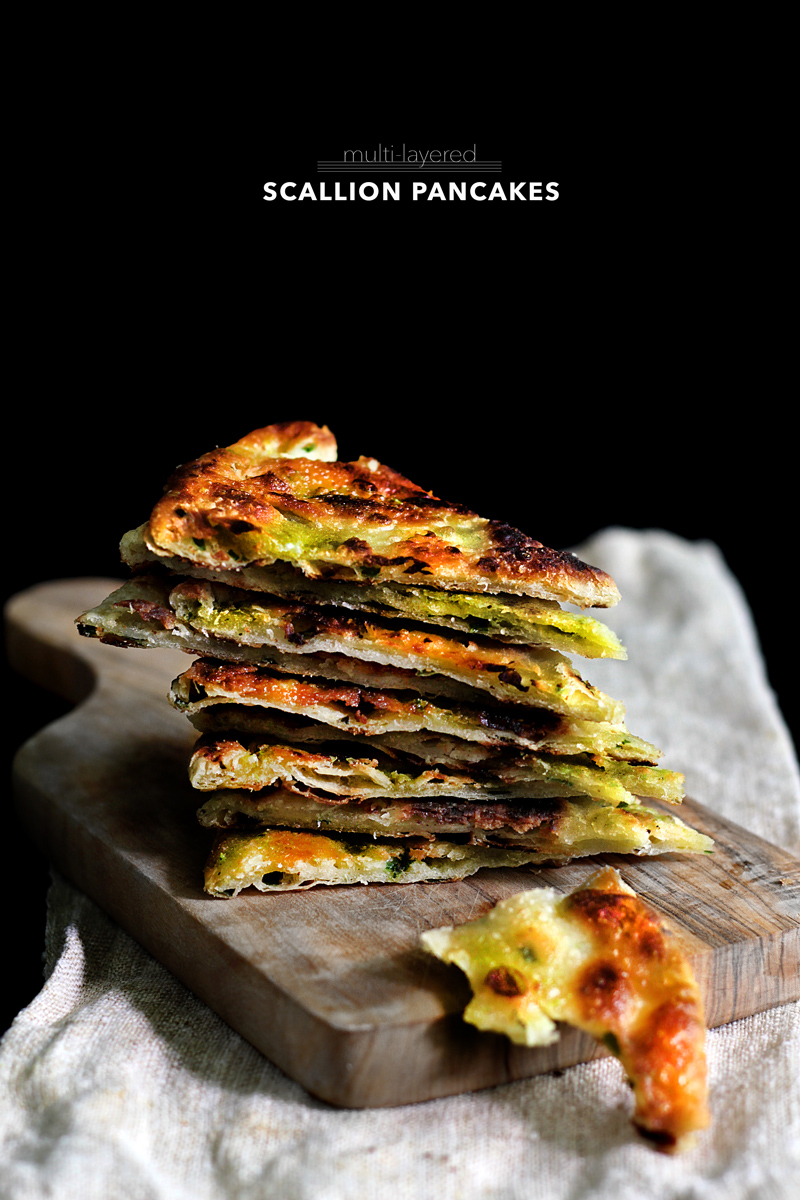 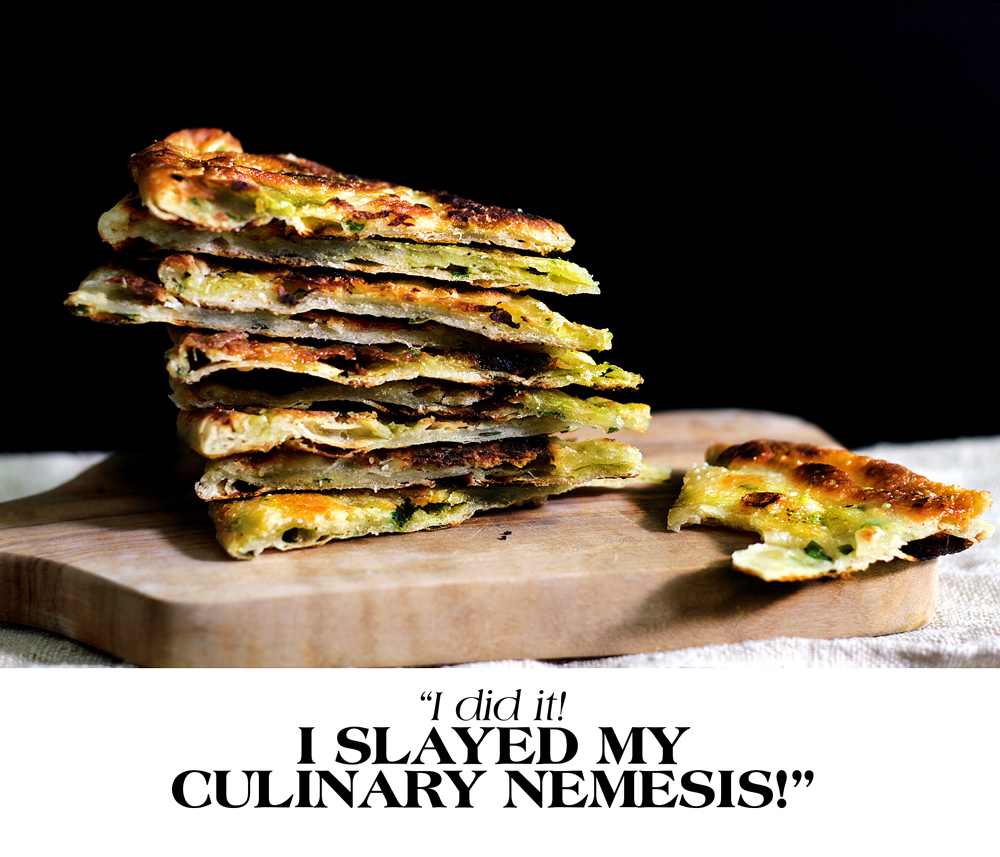 Do you have things that you tried and tried and tried making, and it.  Just.  Doesn’t.  Work?  In the kitchen, I call them my culinary nemesis, and they can be summed up by two words, “chewy” and “layers”.  You whisper these words to my ears in the middle of the night…

I pee my pants. 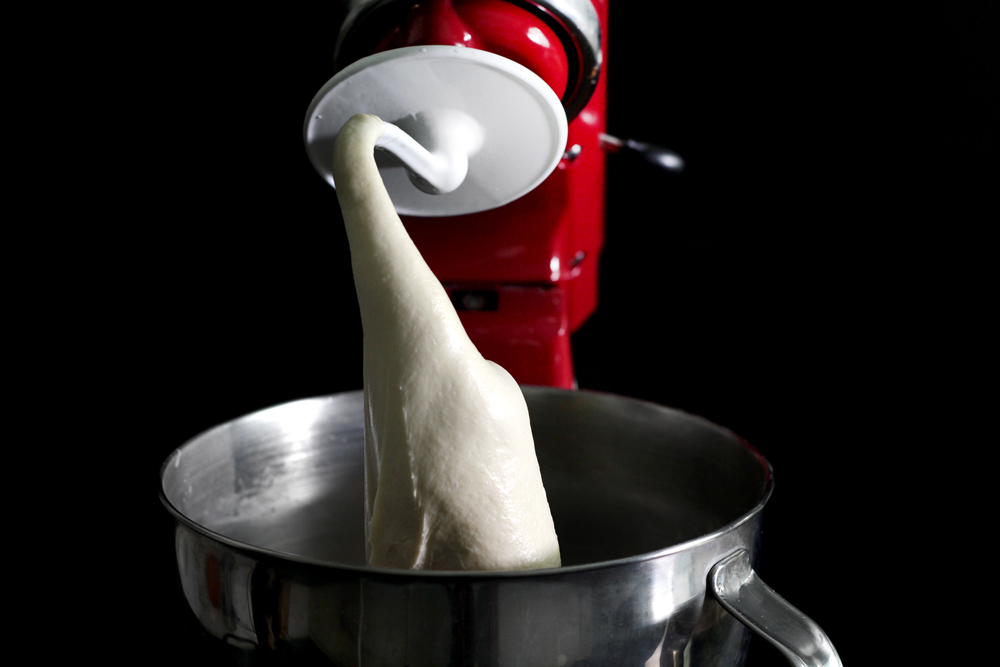 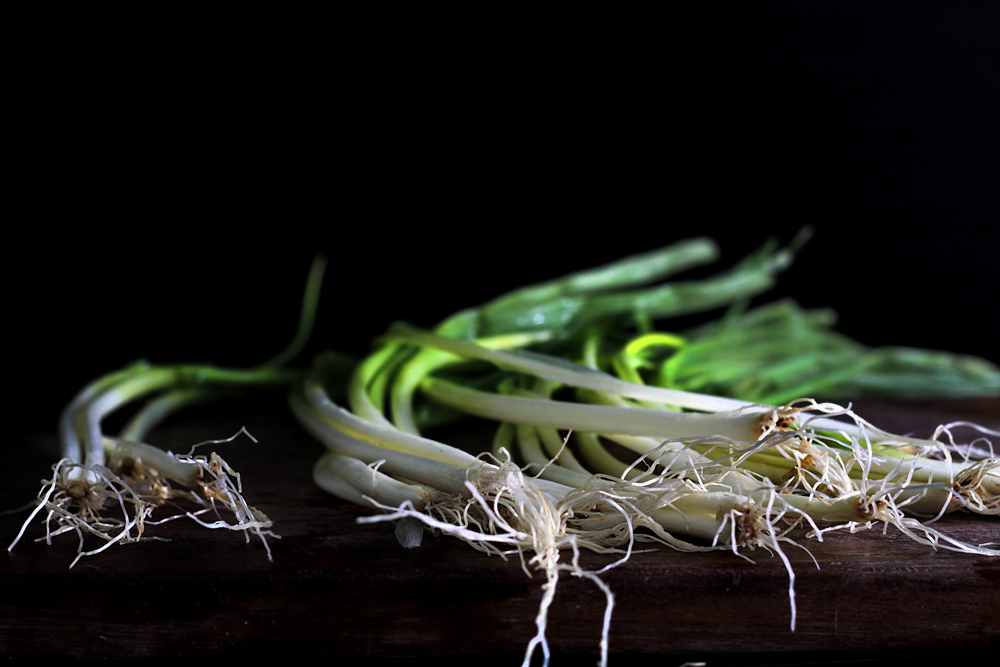 To be absolutely fair to “chewy” which has decided to warm up to me in the past year (truce?  yes.), it did kindly gave blessings to my roux bread, Bonci’s pizza bianca, coco dropped nuts and… (thinking long and hard… my snickerdoodle?  Nope.), yup that’s about it.  We’re still working on our differences.  But “layers”?  Arghhh, “layers” that bitch, stood me up at just about every single invitations I sent and then some.  My previous and probably last attempted croissant had structures so tightly bound in an unison mass, I thought I went to Challah-lah Land, plus I probably shouldn’t say much during my on-going lawsuits with a recipe that cost me a truck-load of butter for its allegedly “easy” puff pastry…  Pfff… yeah, my anticipation for multi-layers did “easily” melt into a butter-puddle of hell in my hot oven… just melted away…

But the day before I left Beijing for the periodic Getaway to Restore Sanity, I did it.  I slayed that bitch down and you are looking at its corpse. 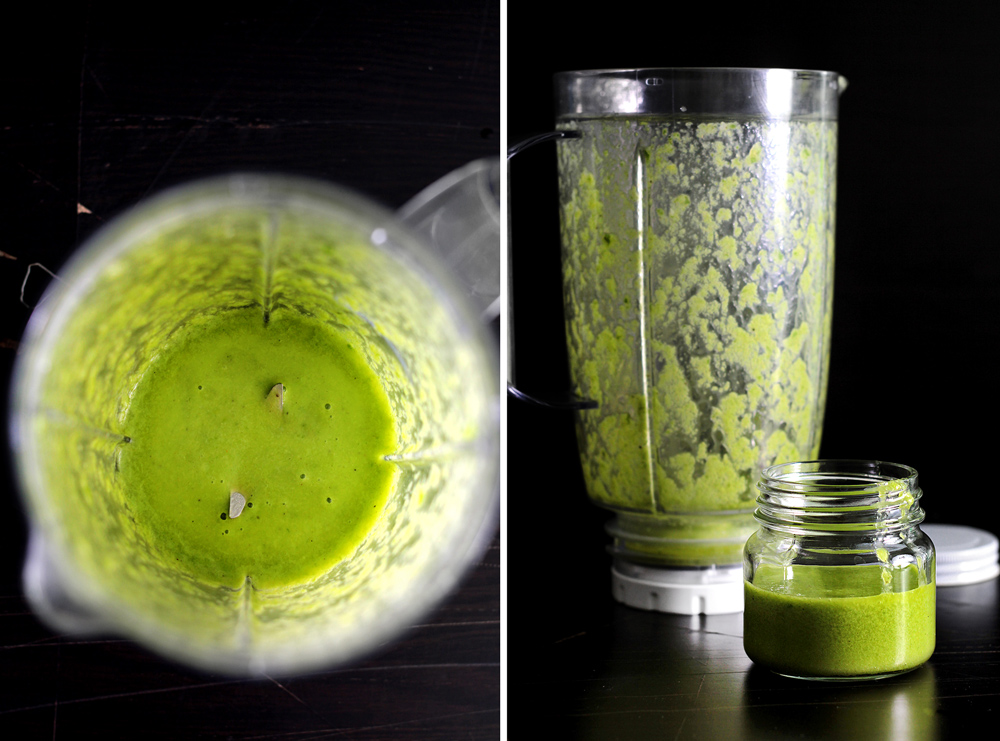 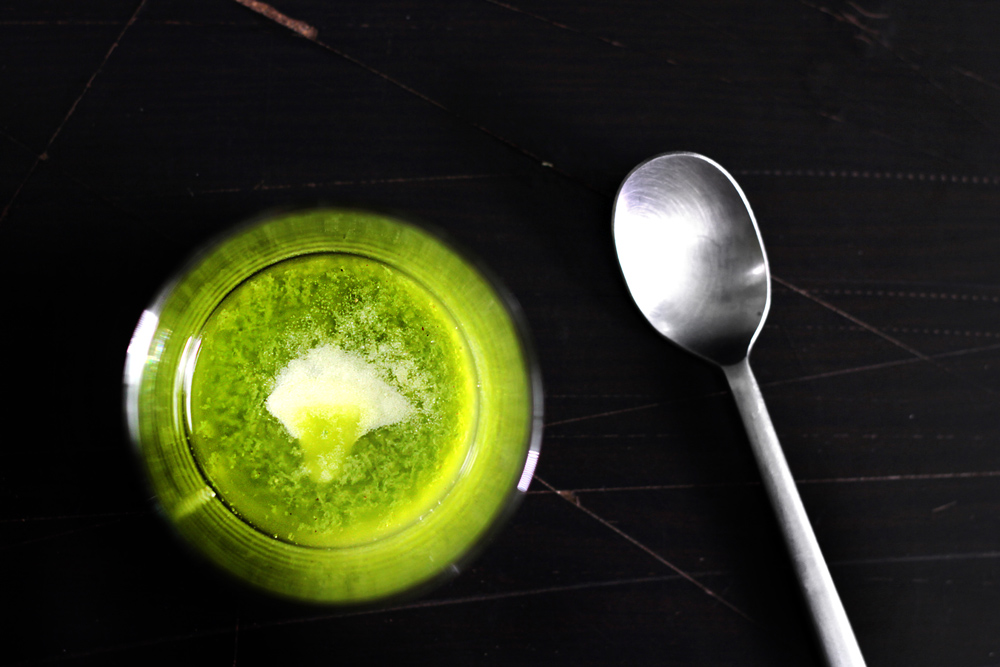 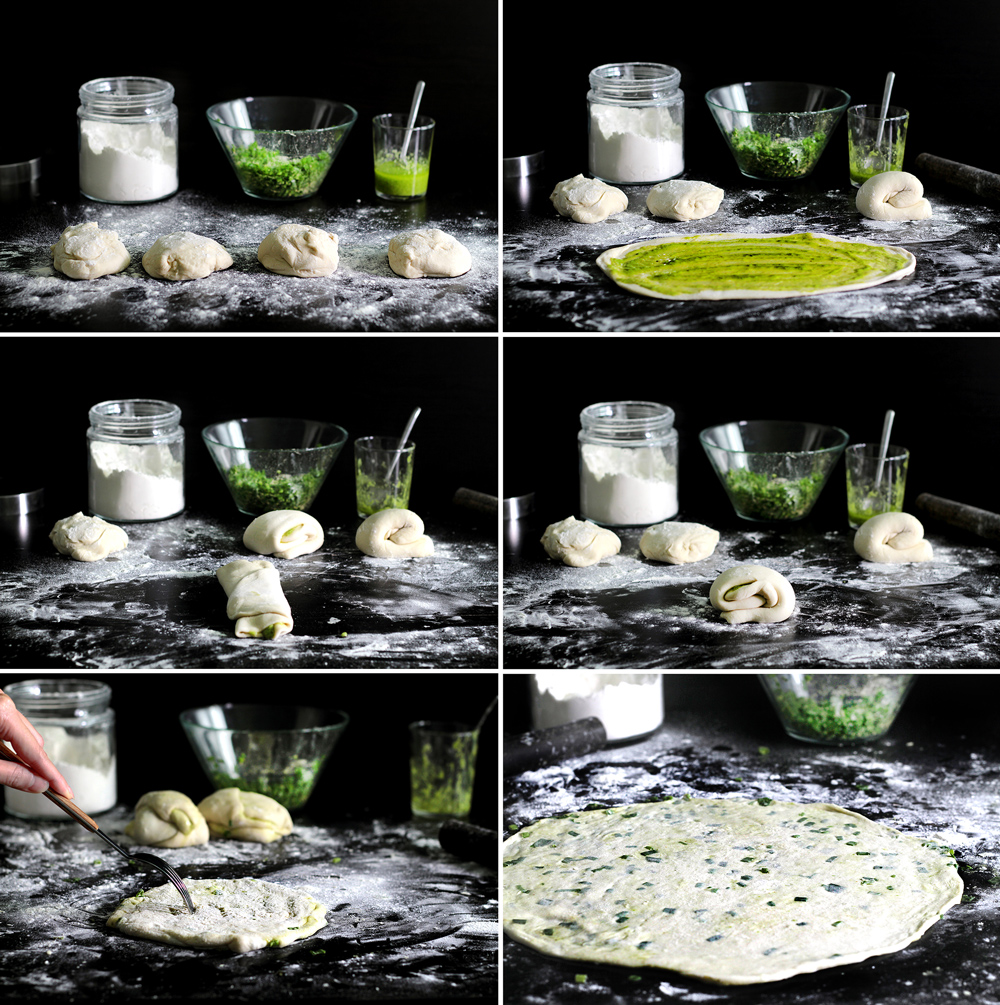 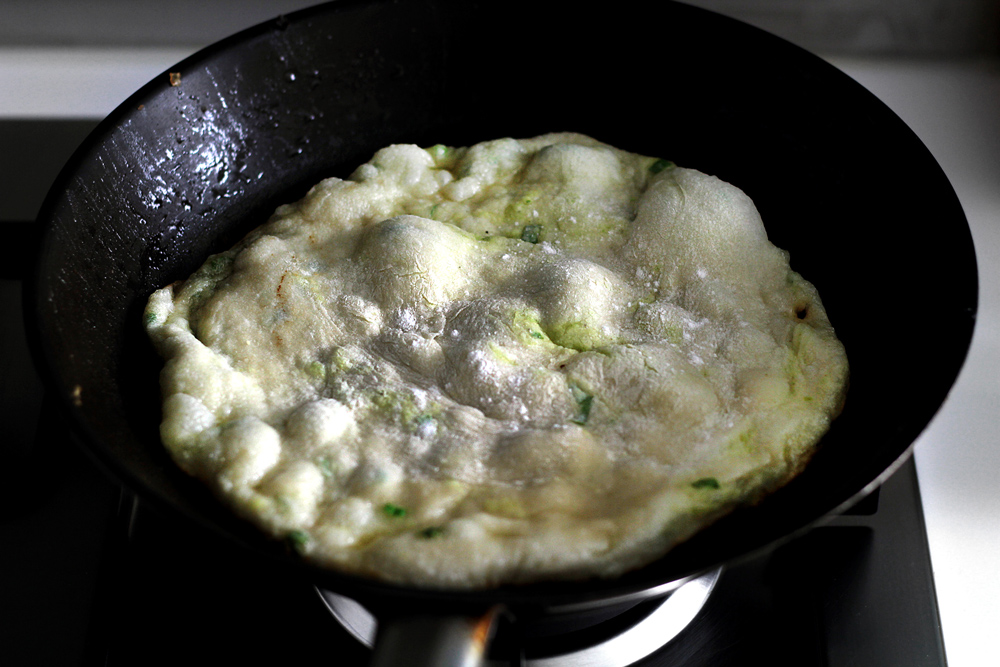 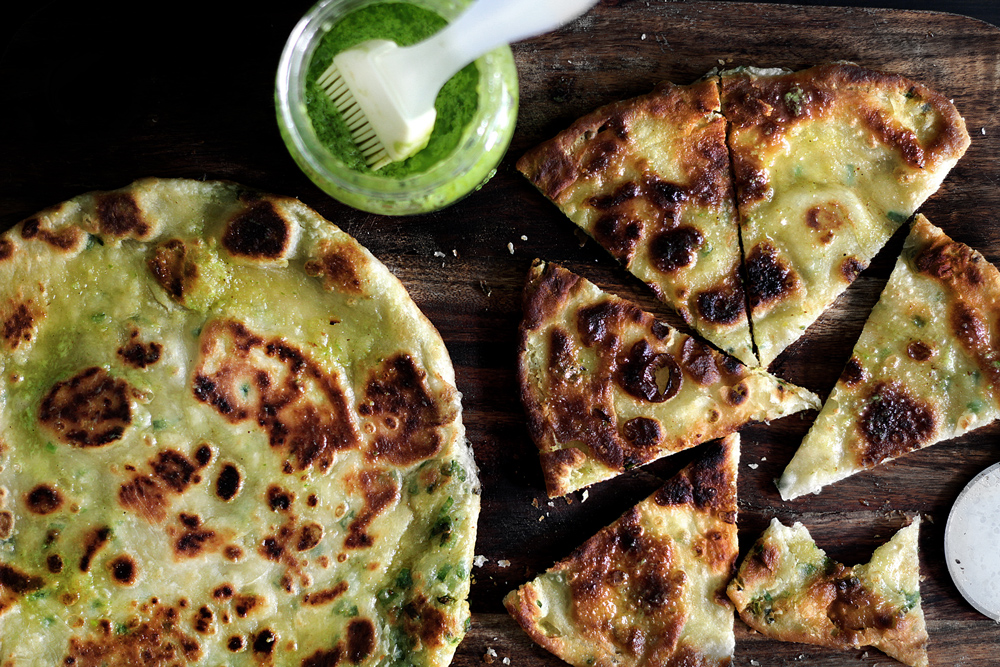 You wouldn’t think flat breads should have layers I mean they are already so… flat.  But that’s the exact texture you would try to achieve in one of my favorite Chinese street snack, a thinly rolled out soft dough, multi-laminated with finely diced scallions and fried golden browned and crispy, the secret of which has tormented me for years through countless failed attempts and heartbreaks.  Let’s see.  The water was too hot which killed the dough… the at-home diced scallion without MSG and non-lard-associated frying oil was proven to be not enough (yes, MSG, and lard!  we’re talking street snacks here.  don’t be silly)… and layers?  What layers?

But, like I said, I think this time I nailed it.

The best mix of warm and hot water to nurture a supple and soft dough that’s layer-friendly, and a blended scallion oil with punches from ground white pepper to make up for the… well, you know, plus a little rolling-dough tricks and secret baking powder for puffs… hey, don’t say I’m not nice.  I timed it perfectly at a season when over-hanging bellies are tolerated and properly covered.

Because that’s exactly what these addictive carbs are gonna give you for Christmas. 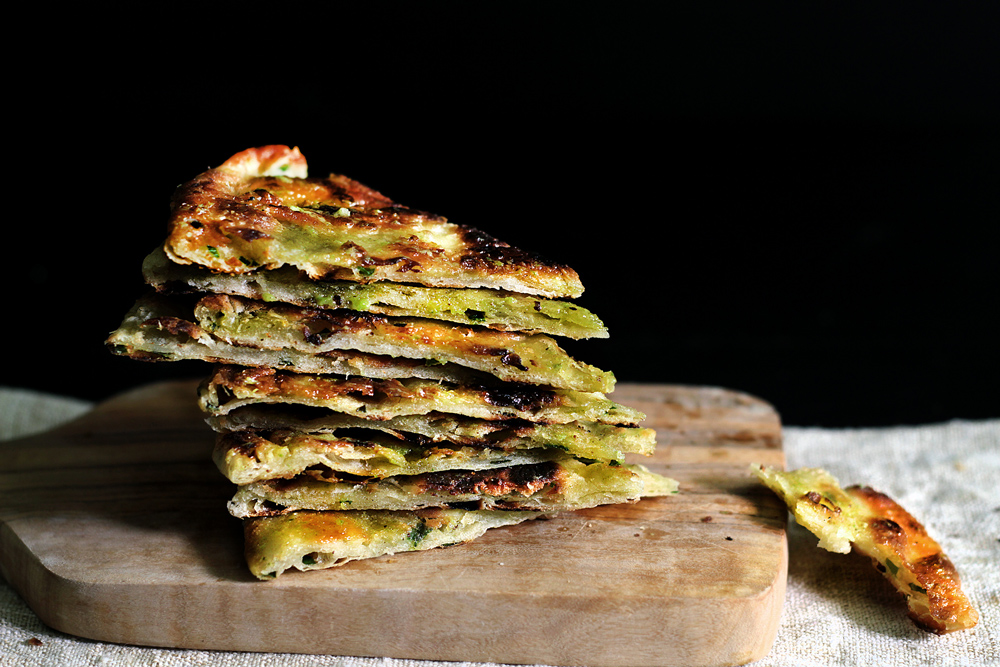 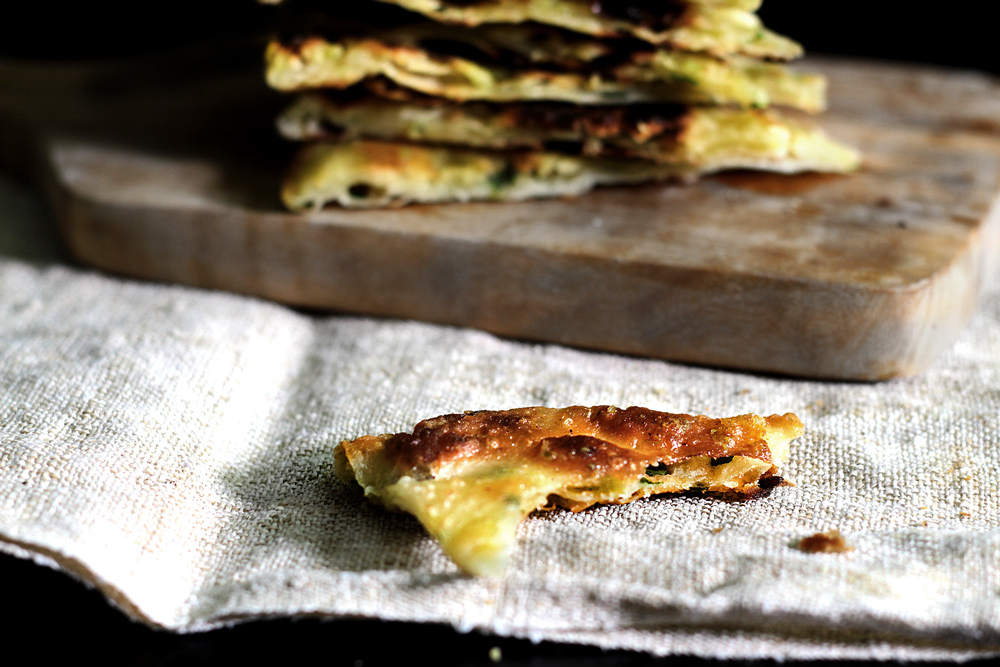 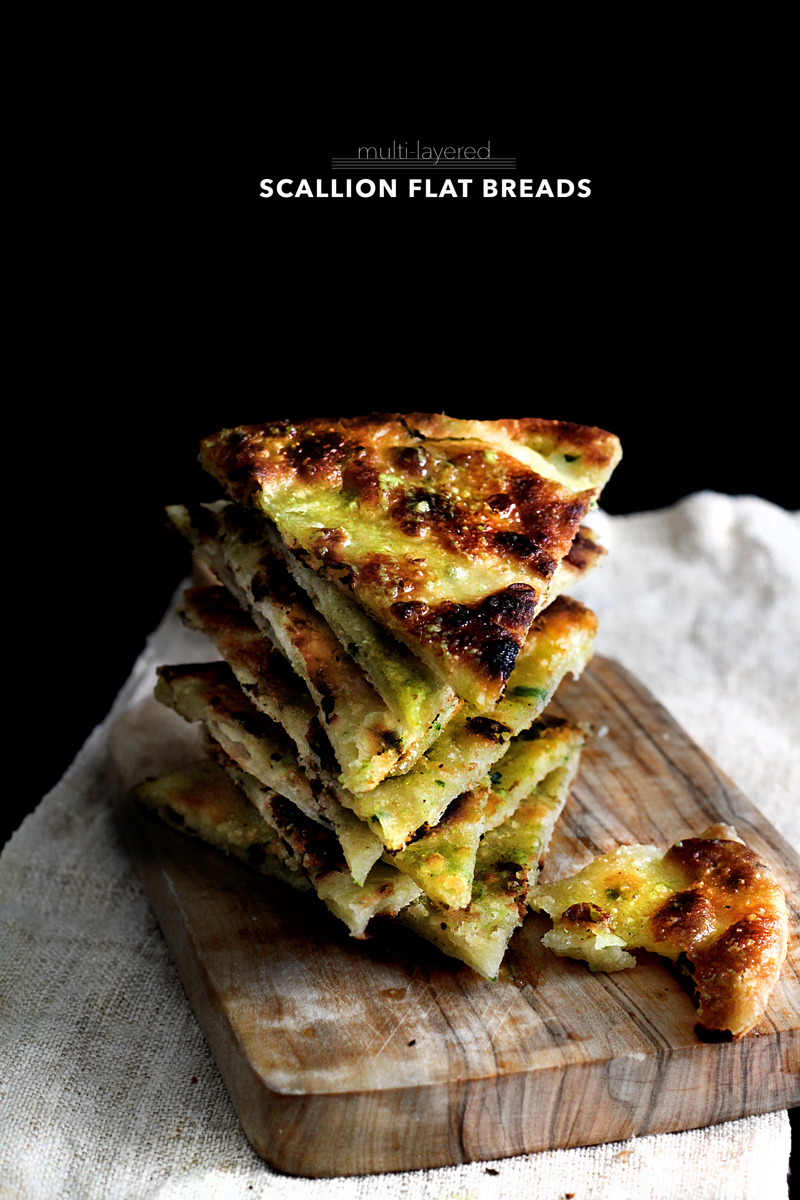 One of the tricks, I believe, is not to roll the dough to deadly thinness that you lose the layers.  The first roll-out at which you apply the scallion oil, should be about slightly thinner than 1/8″.  And the final roll-out should be a bit thicker than 1/16″.  Any thinner than that, you’ll flatten out all the work you’ve done.  I’m not gonna lie… you may fail the first time.  But it will eventually take you to yummy town.

There’s no reason why the awesomeness of this flat bread can’t be expanded to other herbs besides scallion.  Think basil, a little rosemary, thyme, or garlic and parsley.  Whatever you have on hand really, is going to turn these flat breads into great snacks or show-stealing addition to a bread-basket (don’t you looove bread baskets!?)

To make the dough:  Mix all-purpose flour, bread flour, sugar and salt together in a stand-mixer bowl with dough-hook.  Bring a small pot of water to 150ºF/65ºC (it should be almost too hot to touch but NOT close to a simmer), then with the machine running on low, add 1/2 cup of the hot water into the flour-mixture.  Mix for 1 minute or so.  The mixture will still look like loose flours with large lumps.  Then add 1/4 cup of cold water and mix for 1 minute, and then add 1/4 cup of vegetable oil.  Turn the machine on medium-high speed and knead the dough for 5 minutes until shiny and elastic.  The dough will be very wet and sticking to the side of the bowl in the beginning (if it seems tacky already, add 1 tsp of water), but it should slowly pull away cleanly at the end of kneading.  When you lift the dough-hook, the wet dough should droop down from the hook slowly.

If you need to do this with hands, you can.  But keep in mind that this is quite a wet dough and it will stick to your hands while kneading.  Cover the bowl with plastic wrap and let the dough rest for at least 1 hour.

To make the scallions oil and filling:  Add 1 cup of diced scallions, vegetable oil, salt, 1/2 tsp of ground white pepper and 1/4 tsp ground black pepper in a blender and blend until smooth.  Transfer into a bowl.  Take 3 tbsp of the mixture out into another bowl and add 1/8 tsp of baking soda, mix until combined and keep both in the fridge (update 2014/02/04: a reader suggested 4~5 tbsp to be closer to being enough).  Mix the rest of the 1 cup of diced scallion with 1/2 tsp of ground white pepper, set aside.

UPDATE 2014/02/04:  To clarify the recipe a little bit, the 3~4 tbsp of blended scallion oil that you take out and add the baking soda to, is the oil that you apply to the layers.  The remaining scallion oil WITHOUT BAKING SODA, is what you brush on top of the flat breads when they’re done.

To make the flat breads:  Divide the dough into 4 portions and set on a well floured surface.  Take 1 portion, dust with more flour and roll into about 1/8″ sheet.  Apply a generous layer of scallion oil (mixed with baking soda) and sprinkle 2 tbsp of diced scallions over the sheet, then fold it in the same direction 3 times (like folding a letter) into a log, then fold the log length-wise 2 times into a round-shaped dough (try to eliminate as much air as possible while you fold).  Set aside (to let it rest) and repeat the same with the other 3 portions.

Now go back to the 1st dough you worked on (which had a few minutes to rest) and press it down gently into a thick, flat disk.  There will be air pockets in between the layers which will make it hard to roll out, so pierce the dough a few times with a fork and dust with only enough flour to prevent sticking, then roll into a large circle slightly thicker than 1/16″ (careful not to over-roll it because you’ll risk flattening all the layers)(if the dough springs back stubbornly, rest it for another 2 min).  If you want to keep the flat breads in the freezer, laminate the rolled-out doughs in between two sheets of parchment paper and tuck inside a zip-lock bag.  Keep frozen until needed.

Heat 2 tbsp of oil in a large, non-stick skillet over medium-heat.  Carefully lift the dough up and transfer to the skillet.  Cook over medium-low heat, add more oil if needed, until golden browned on both sides (it’s important to add enough oil)(the baking soda will create bubbles in between layers during cookings).  Right off the skillet while it’s still hot, brush the top with more scallion oil (without baking soda).  Serve immediately. 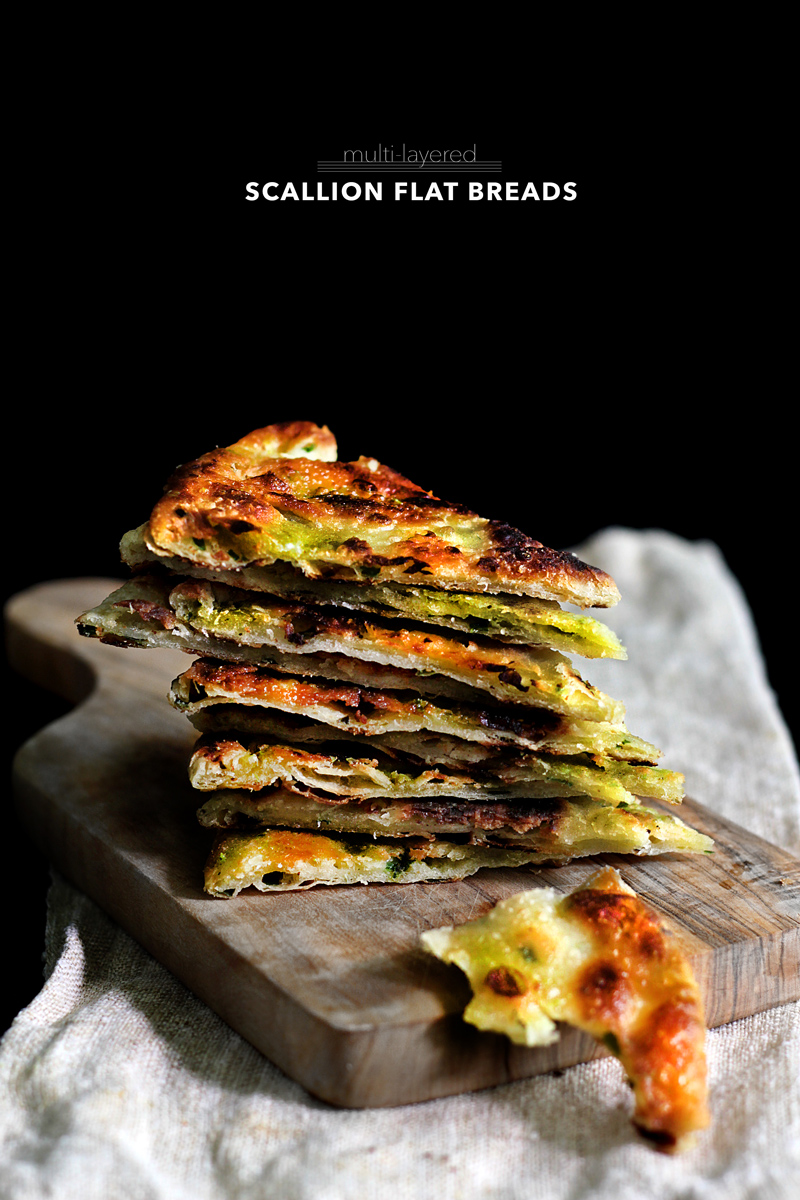