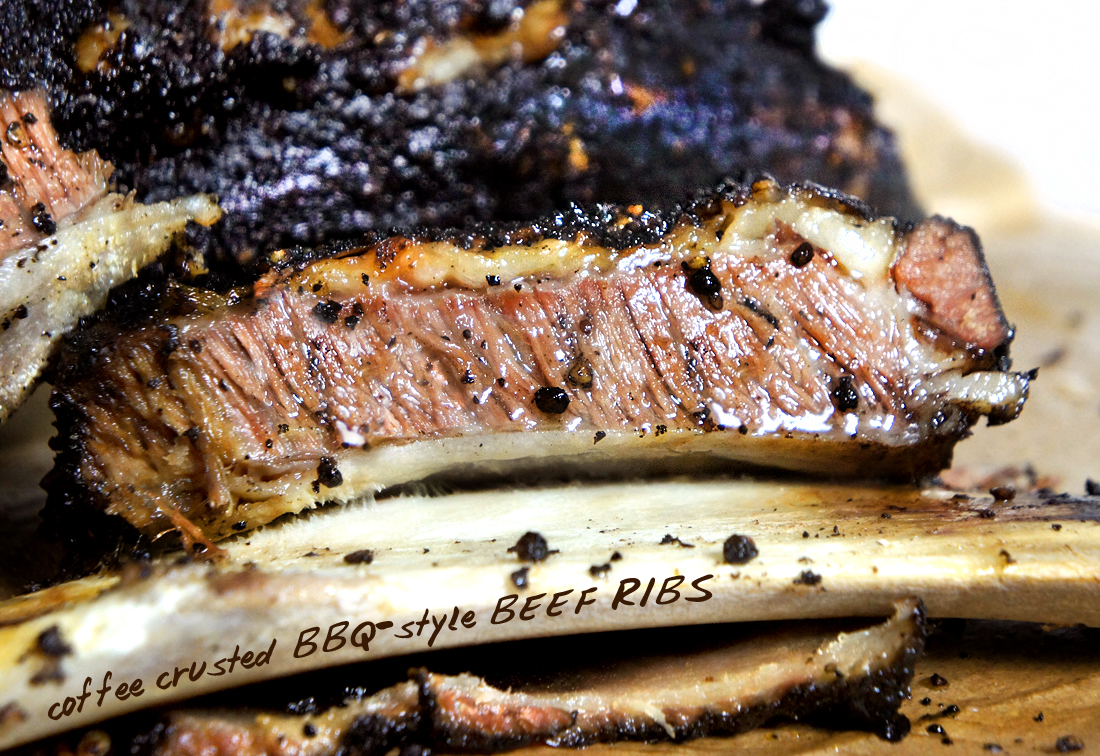 November 29, 2012 In All recipes, Christmas Morning Series (overnight roast), Got Nothing But Time, Meat 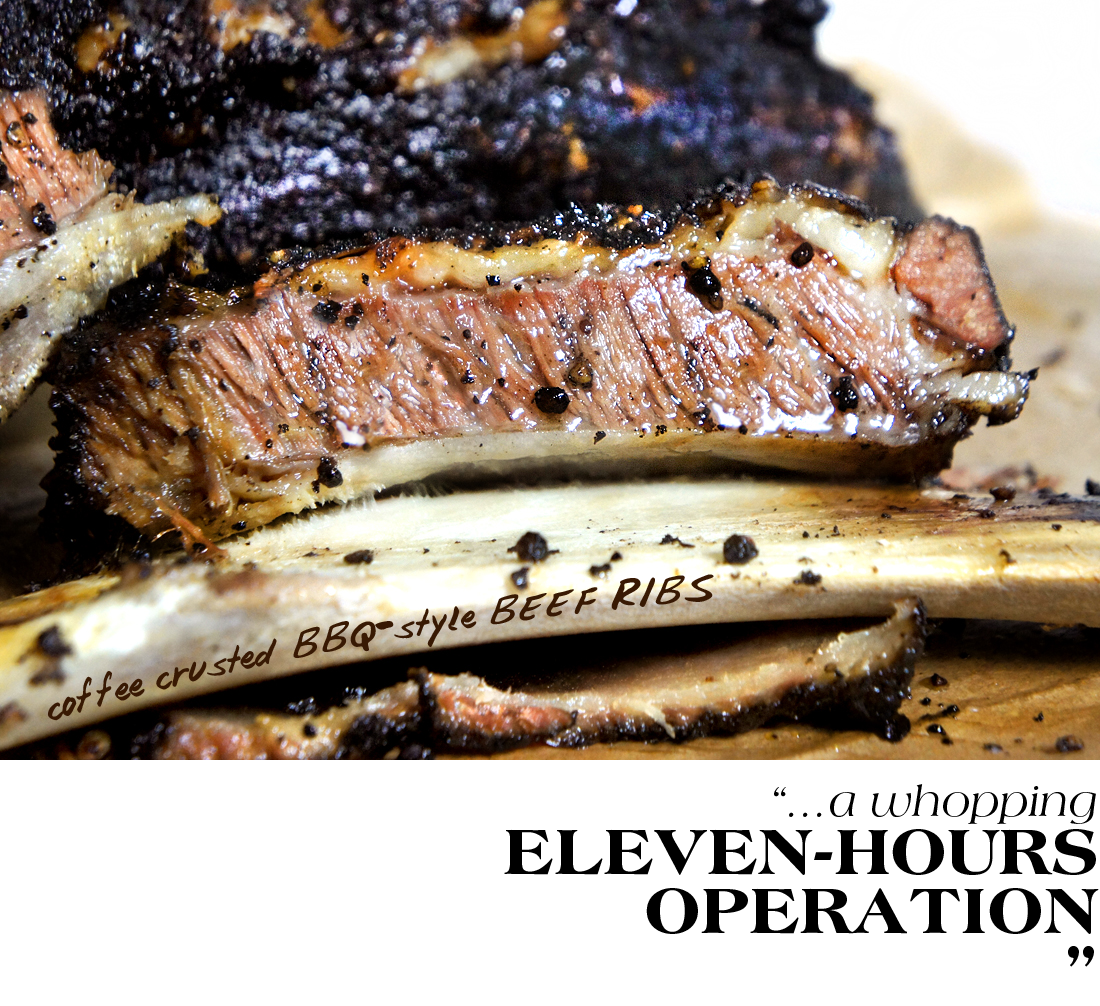 I have never been a BBQ person unless you can call pastrami or Montreal’s smoked meat “BBQ” (rubs… smoke… low temperature… ?).   Honestly it’s one of those world’s-great-foods categories that falls into my list of things that’s mysteriously popular over largely unfounded reasons, like durian.  I’m very much aware that I’m not the most credited scholar on BBQ for someone who’s never really been to the South, except for New Orleans where we were blinded by other dashing things they do much better with.  On top of that, an one-time appearance to the annual Big Apple BBQ Block Party somewhere around 2004 or 2005… plus a couple of supposedly-happening BBQ joints in the city, pretty much sums up our entire BBQ experience up to date.  And all of which I can comfortably say, wasn’t all that. 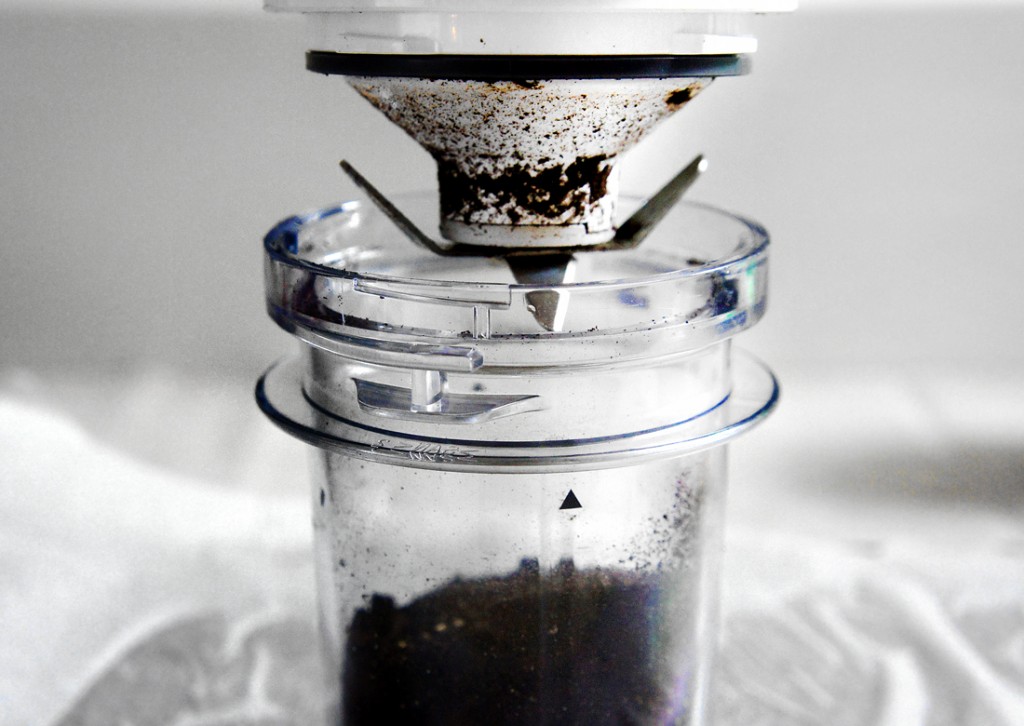 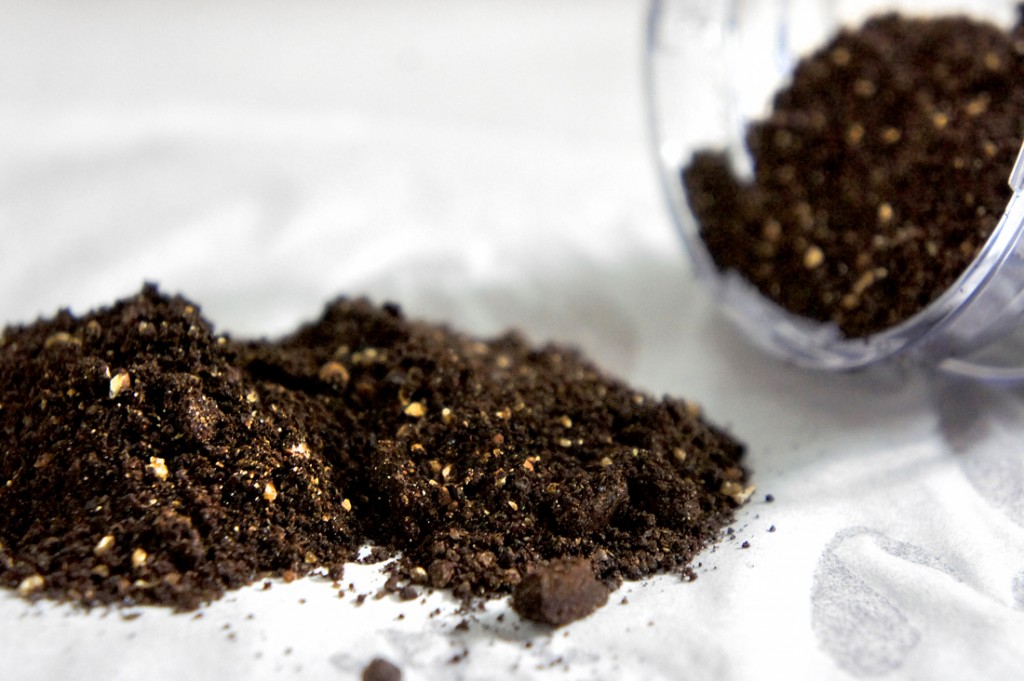 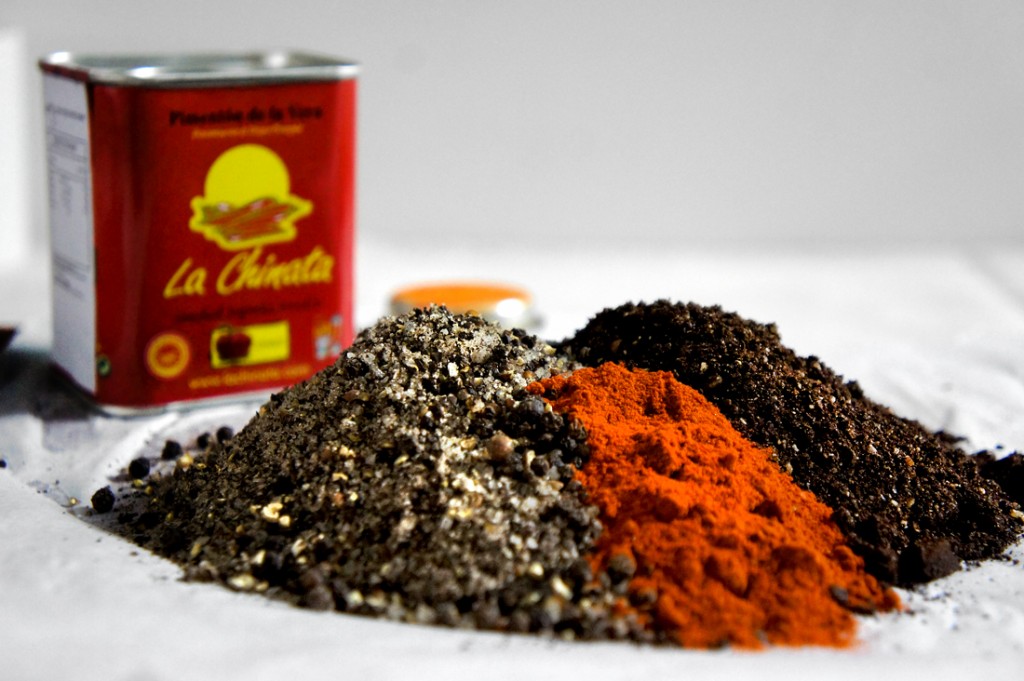 Jason on the other hand is a much more faithful BBQ enthusiast but only in theory.  For quite some time now, he’s been romantically involved with the IDEA of BBQ more than the actual experience, meaning though he has ALSO NEVER had anything that blew his mind off, he still firmly and self-abusively believes that’s it’s out there… like how women believes in Mr. Right.  I can’t say I fully comprehend.  Because he’s a dude?  And dudes dig BBQ… and burning things…? or sometimes I think he’s too emotionally invested to end it…  When the second chance came for NYC BBQ block party to redeem itself in the following year, Mr. Believer was all pumped up and ready to go out there to get believing, but only to find his chance intercepted by my promptly-timed breakout of hives that swarmed my entire body.  I believe that put a slight dent in our relationship.  Then year after year I vetoed his suggestion for a pilgrimage to one of the BBQ capitals by saying, “We’ve never been to Paris and you want to go to Kansas?!”, until his faith for the true BBQ experience has gradually faded into a distant and bittersweet notion. 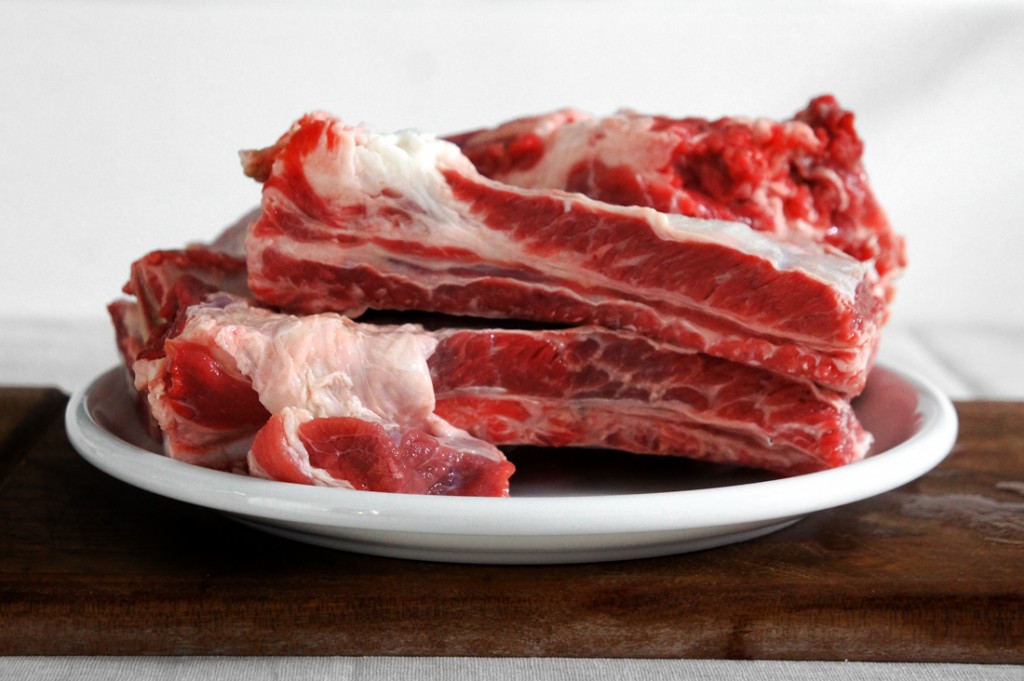 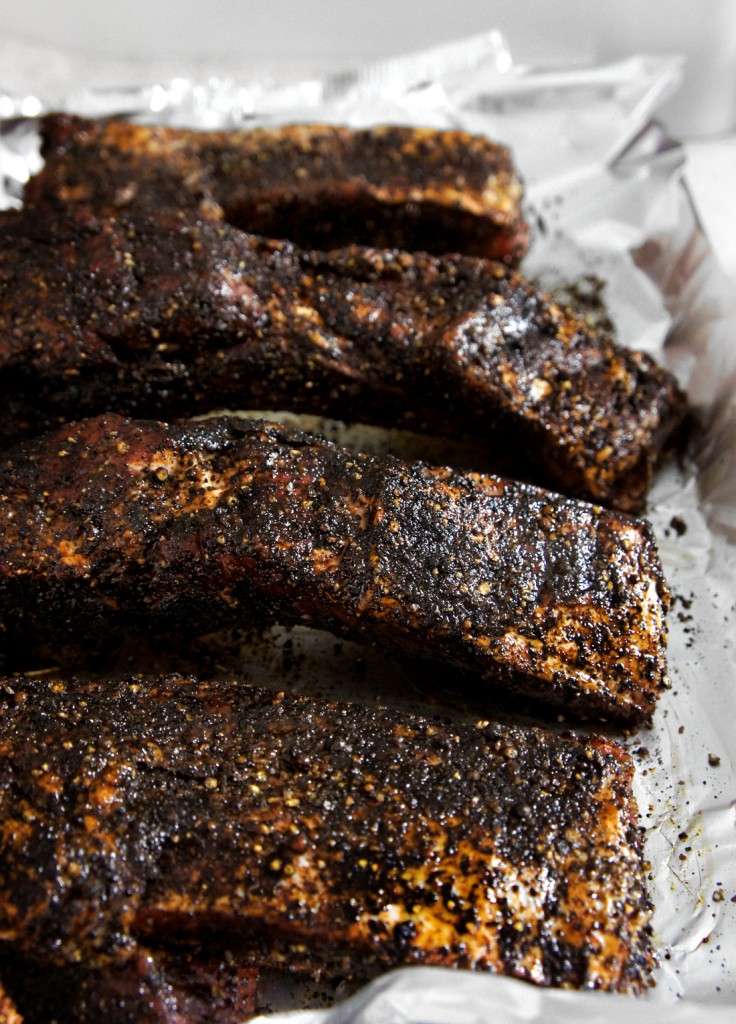 But a couple weeks ago, my BBQ-callings finally contacted me.  For the first time EVER, after numerous TV programs aimed to make food-porn out of fat-glistening and sauce-dripping BBQ shots but failed, I finally saw what’s on my TV screen and wished AGAIN for the first time that I were sinking my face into exactly that.  It wasn’t babybacks or briskets or sausages or any other ordinary and boring things that BBQ has come to be known of, but THIS – big hunks of prehistoric-barbaric-Flintstone-size BEEF RIBS, carefully nurtured by BBQ-whisperers while they smoke under super-low temperature until finally rendered down into s glorious, sticky and tender submission (“Geee is this how you talk nowadays?…”).  If you are a beef lover, this is the final destination.  Except regretfully for me, such destination is now exactly 11,025 miles + a-big-hole-in-my-pocket away.  There’s a saying for that somewhere… 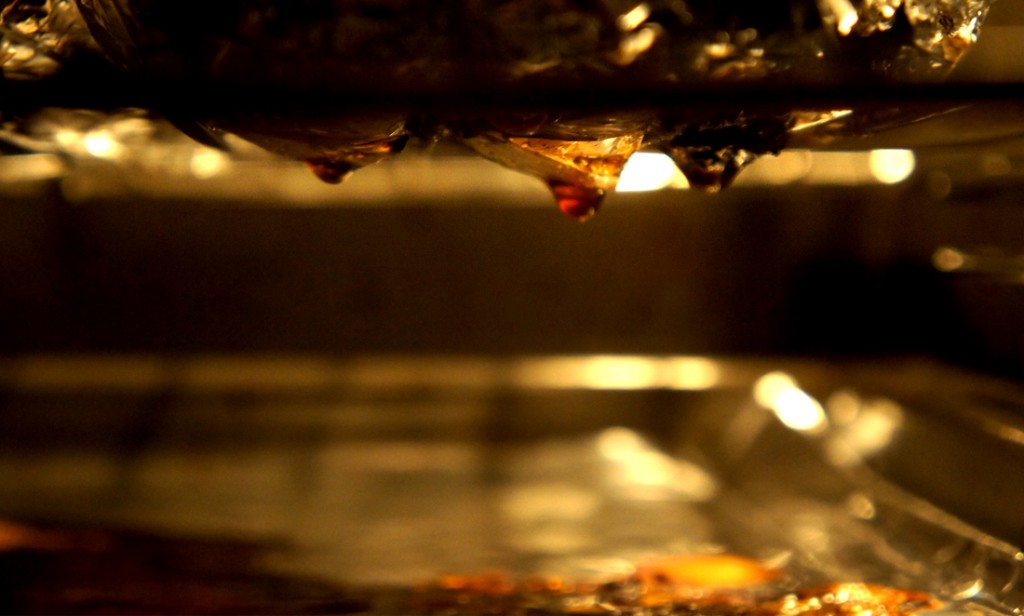 I’m not going to say that you could produce the same at home.  That would be complete fantasy.  If not for anything else but just the fact that the smoke is taken out of the equation, would fundamentally make this NOT the same.   There is no fancy rub with a 100 secret ingredients accordingly the master BBQ-whisperer, but just the pure magic of salt and pepper and smoke.  So you can see how important 1-out-of-3 is… but that doesn’t mean this can’t be the next-best-thing and even, dare I say, a fix.  When I was brainstorming on this, I had to at least make an effort to compensate on the missing of smoke somehow, thus the additional of freshly-ground espresso beans and smoked paprika is introduced to the mix.  And I had not the slightest idea of how much time it requires for the ribs to tender under the temperature of 300ºF/150ºC ~ 200ºF/100ºC, so I decide on a completely random assumption to begin at 5 pm.  Boy… was that a mistake.  Because this tug-of-war between me and the breakdown of muscle tissues has proven to be a WHOPPING eleven-hours operation!  Even LONGER if I had not flagged my white kitchen towel at 3 am and turned the knob a bit higher to give it a final push.  AND BECAUSE you can clearly see how wrong it was to be an inche-close to these salt-and-coffee crusted, fat-bursting beef ribs at a very inappropriate hour to even take water…  I exercised my self-discipline to its full potential that night and thus possibly damaged a nerve in my fingers.  I suggest you not do the same… 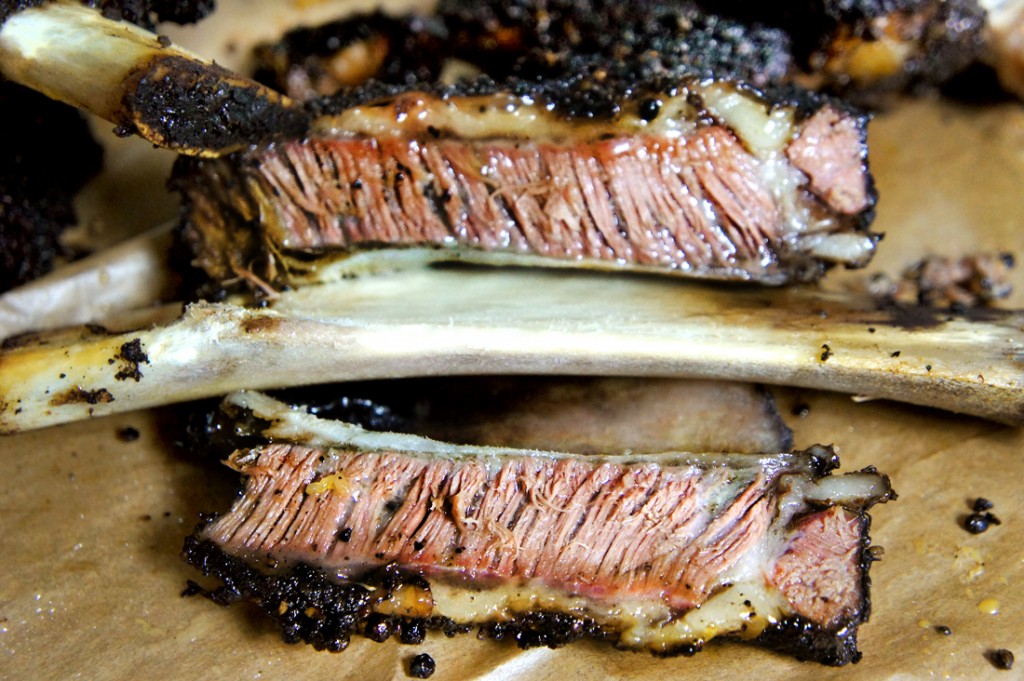 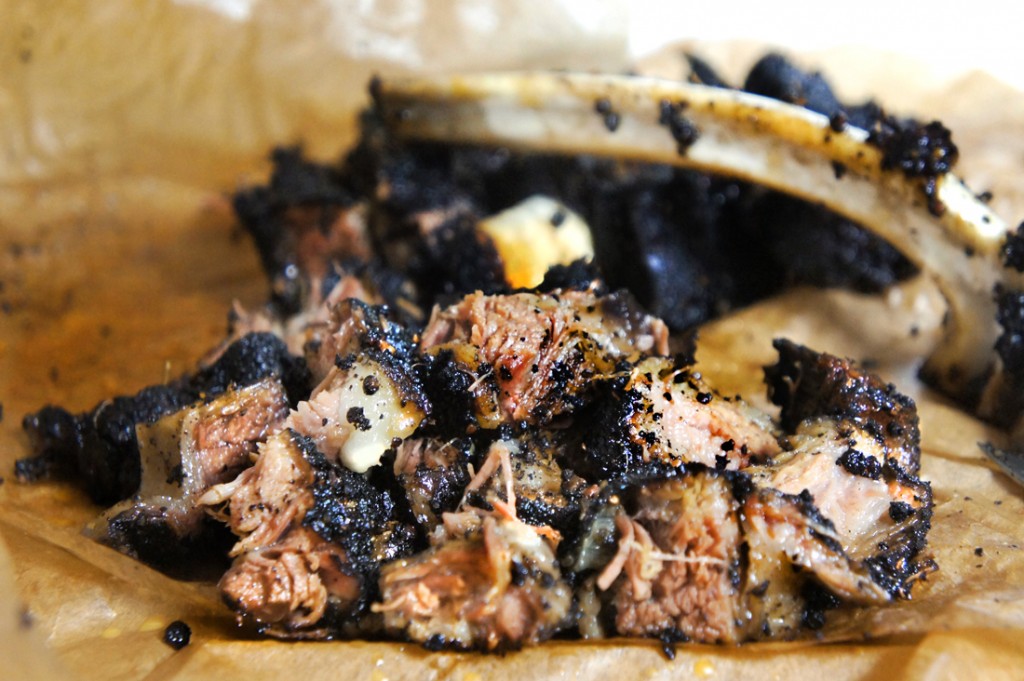 I would suggest starting at 8 am in the morning to have the ribs ready for dinner.  It’s time-consuming but the good news is it doesn’t need a lot of attention during cooking.

8:00 ~ 8:10 am – Coarsely grind the coffee beans in a spice grinder (about the same fineness as for French-press grind), then set  aside.  Then grind the black peppercorn and sea salts together until the biggest piece of peppercorn is 1/2~1/4 pieces.  Mix evenly the ground coffee, peppercorns and seat salt together with the smoked paprika.

8:10 ~ 8:20 am – Lay the beef ribs on a baking sheet and rub with a thin coating of olive oil, then coat it all over with the spice mix.  Use your hand to PRESS the spice mix into the ribs and make sure every inches of surface is covered, and the spice mix is GLUED nicely onto the meats.  The ribs should have a thick, “crusty” coating of the mix.  Roast in the 500ºF/260ºC oven for 10 min until you have a nice searing on the ribs.  Remove the baking sheet from the oven, then turn the heat down to 300ºF/150ºC.

8:20 am ~ 12:30 pm – Transfer all the ribs onto double-sheets of heavy-duty aluminum foils.  Wrap the ribs into the foil and make sure there’s no openings anywhere.  Place the entire “pouch” on top of a baking rack and score a few slits on the bottom of the pouch with a small knife (for draining).  Then place the baking rack on top of a baking sheet to catch the draining.  Place the entire thing back in the 300ºF/150ºC oven and roast for 4 hours.

12:30 ~ 7:30 pm – After 4 hours, turn the heat down to 220ºF/100ºC, and slow-roast for another 7 hours.  During the entire time you could check the tenderness of the ribs once or twice.  If by the end of 7 hours, a fork cannot be easily inserted into the meat, I would suggest turning the heat back up to 300ºF/150ºC again, and do a final push for 1~2 hours.  The final product should be sticky, tender and gelatinous.  A darker shade of pink should develop along the outer surface of the muscle tissue.

7:30 ~ 8:30 pm – Sprinkle with fine sea salt and eat with a bit of Dijon mustard.  You could chop the meat up into pieces, or just dig into it straight-up in true carnivores-style. 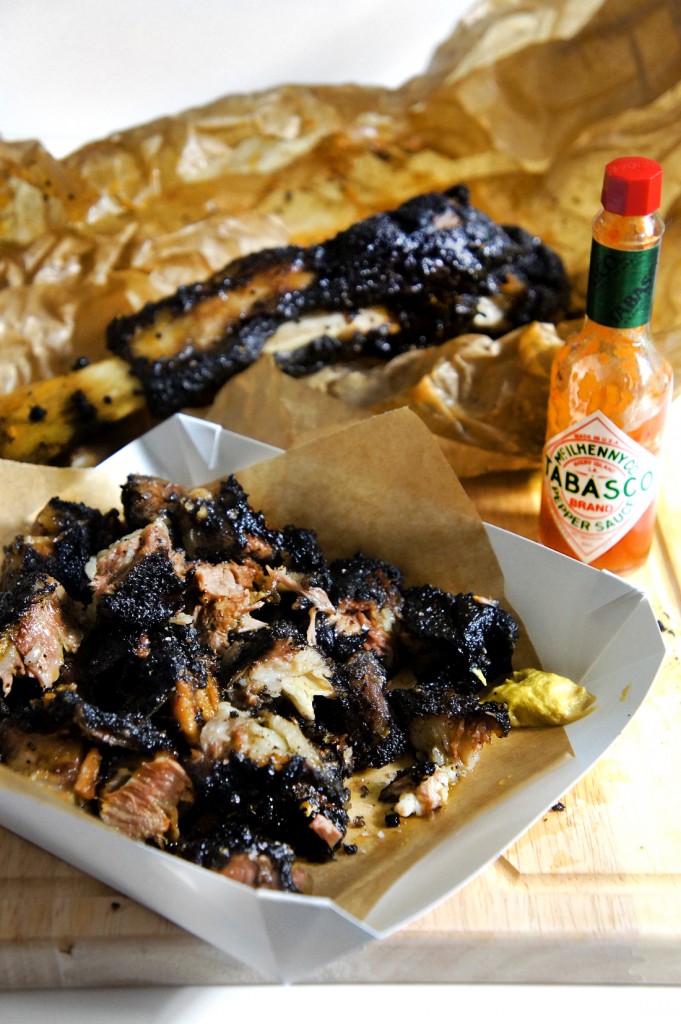