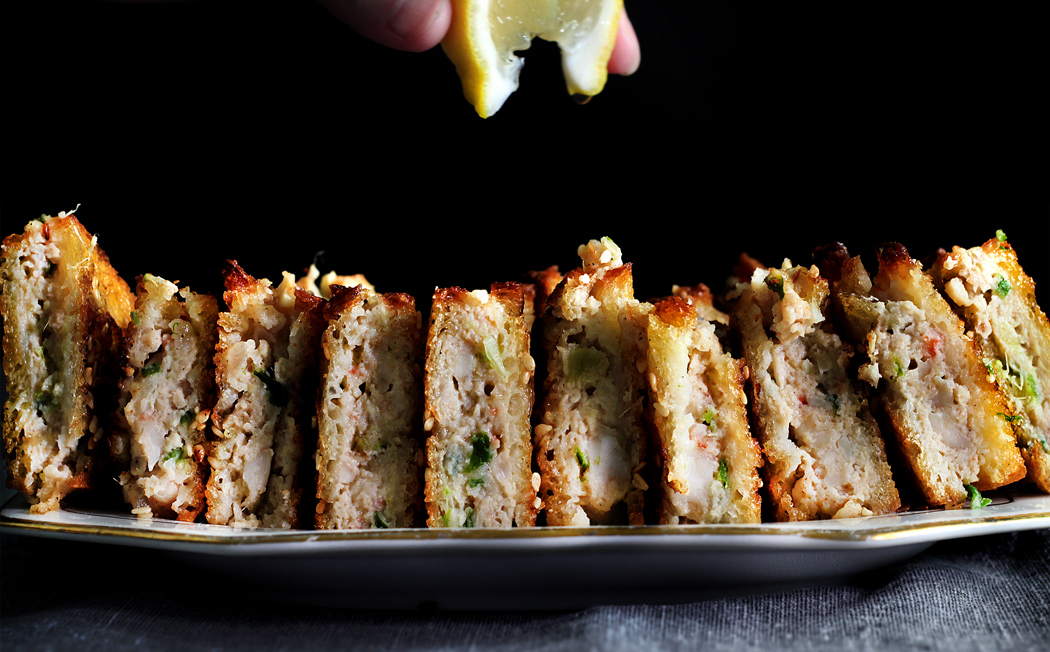 Can I rudely leave you alone with this crunchy… buttery… porky, gingery shrimpy thingy today even though you were just introduced?  Not that you’ll need any persuasions to take them home to your bed, but you know, I still feel like explaining myself why I’m in such a hast today.  Well, first, It’s been the third consecutive “blue sky day” here in Beijing which is as rare as a Macy’s Thanksgiving Day Parade through The Black Gate of Mordor, so yes first, I think I should step outside my nest.  Secondly, yesterday as I was routinely sipping my afternoon joe while courting my laptop, through the misty reflection of the screen I saw there he was… Rebeus Hagrid, in his bad hair-day.  So yes secondly, I think I should step outside my nest.  Thirdly, there’s a fabulous red skirt from Zara with my hip’s name on it. 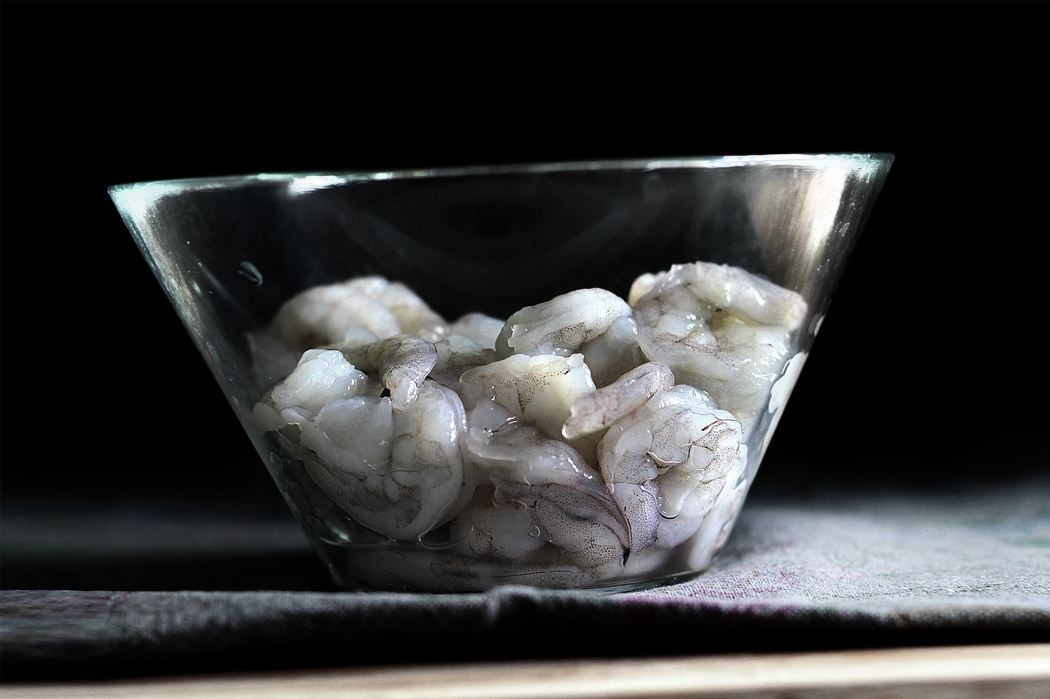 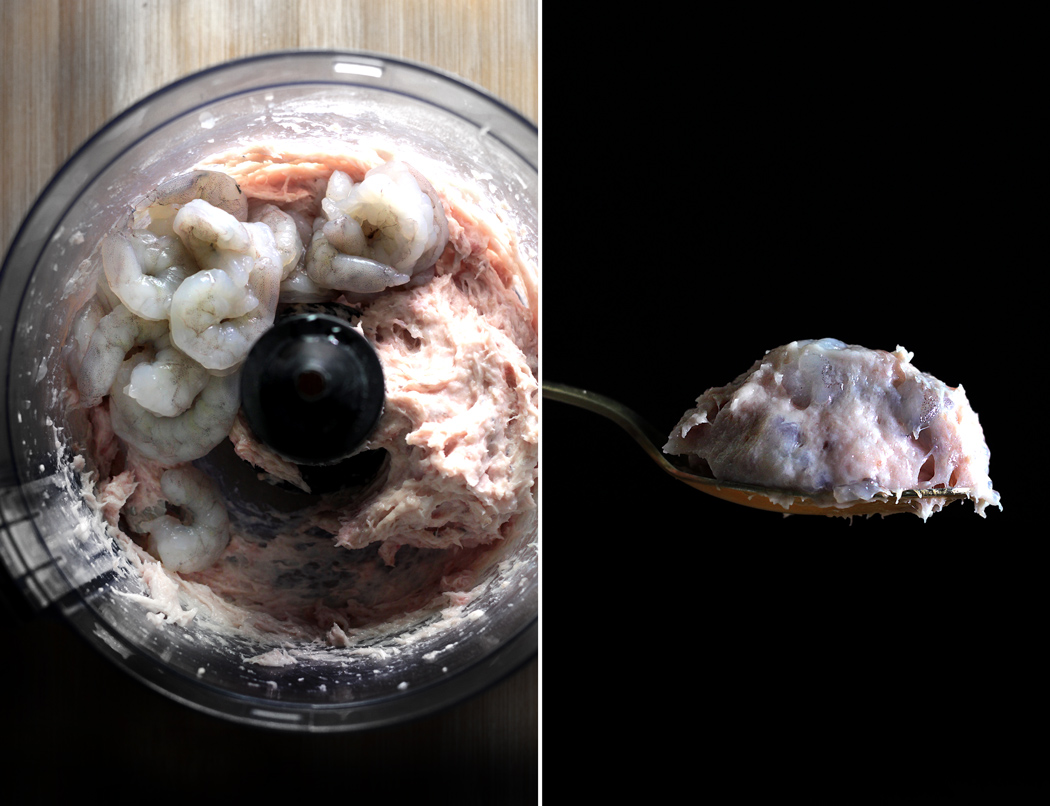 So quickly, just quickly though, I hope it has become obvious that… I LIKE shrimps.  They are my favourite sea-friend in the whole world, only if sea urchin wasn’t always such a snobbish asshole.  But I can’t help but noticing that compared to say chickens or whatnots, they fell a bit under-appreciated and under-utilized.  Perhaps because you thought they were expensive?  If you can’t always afford majestic, masculine, the fine beefcakes in the line of prawns to make things like this shrimp roll, or this tom yum shrimp tomato soup, or this category-5 typhoon shelter garlic shrimps, may I remind you that there are plenty of earnest, dependable and sensitive shrimps looking to settle down in your nearest freezer section?  And since we Asians are the lords of grinding secondary cuts, you’ll see dishes using ground humble shrimps in more places than you realize.  I mean, hello~ dim sum shrimp dumplings?  These pretty tofu with pink stuffings?  Or simply dropped in hot pots like little snappy meatballs.

But then again, I alway say that if you wanted to sell an ingredients, make them the ultimate finger foods. 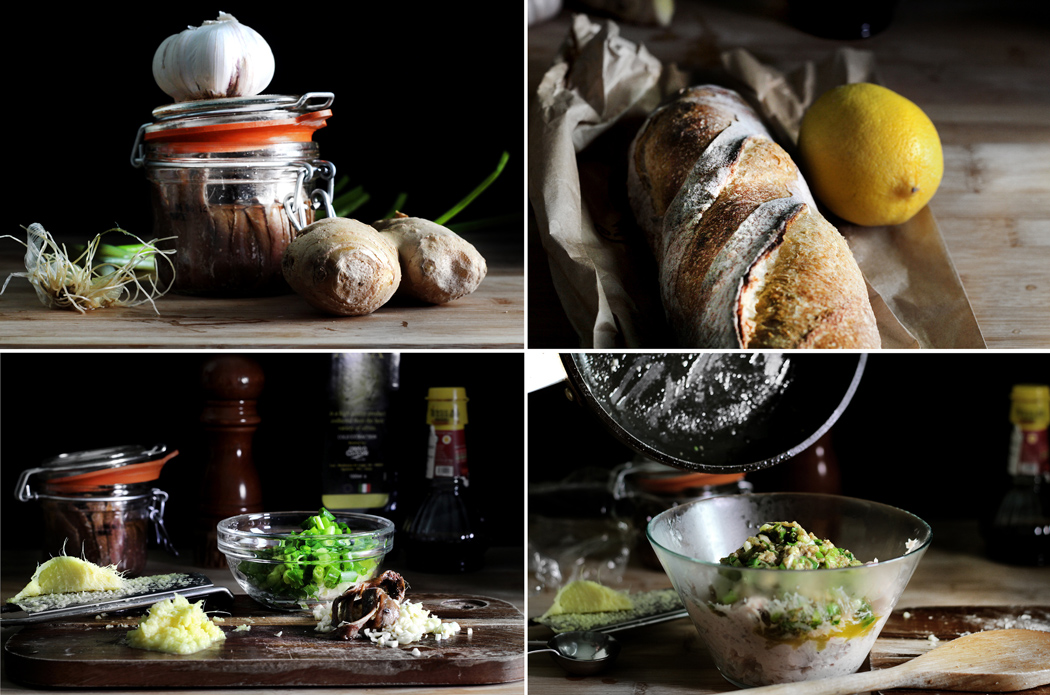 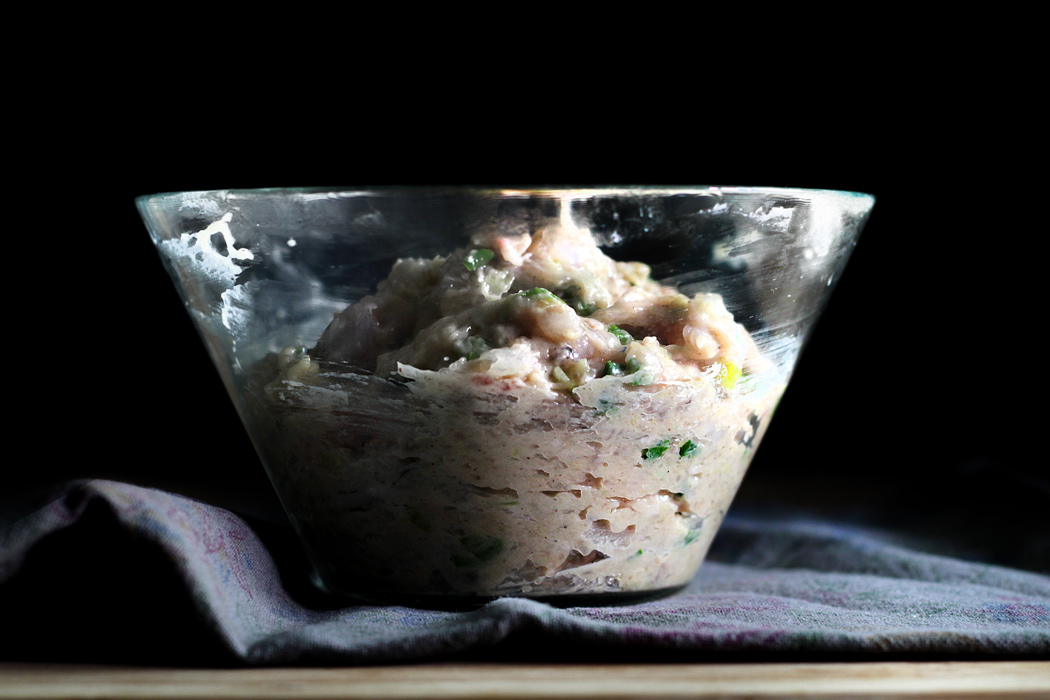 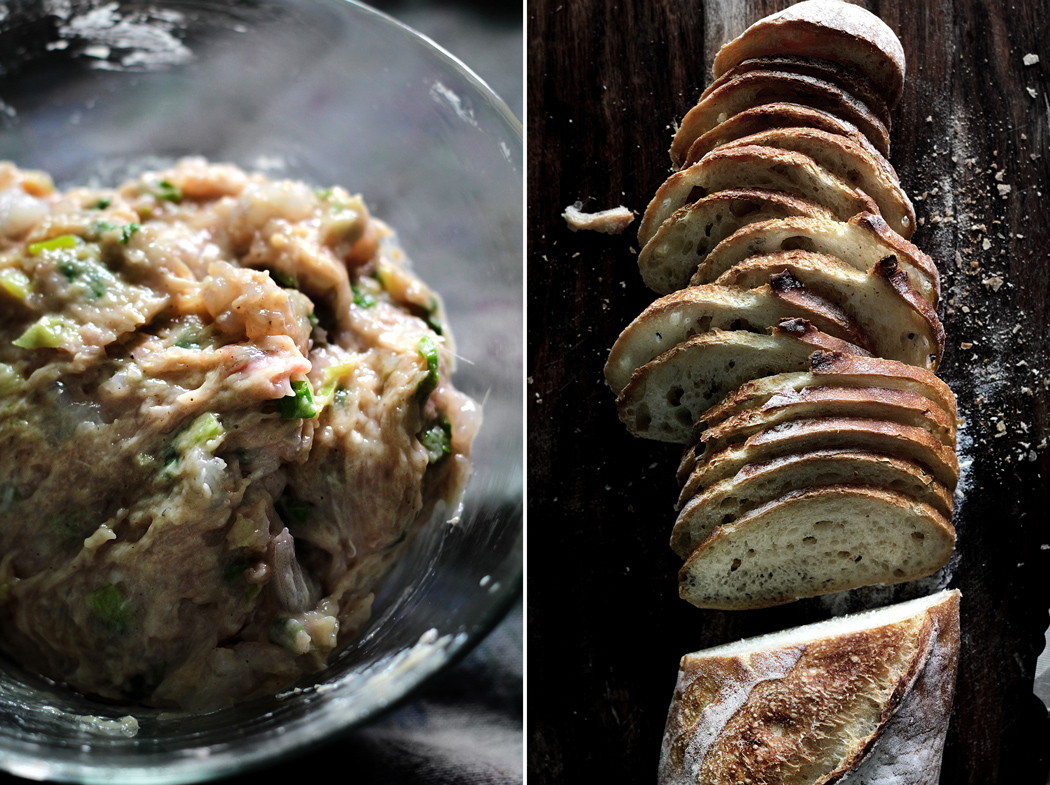 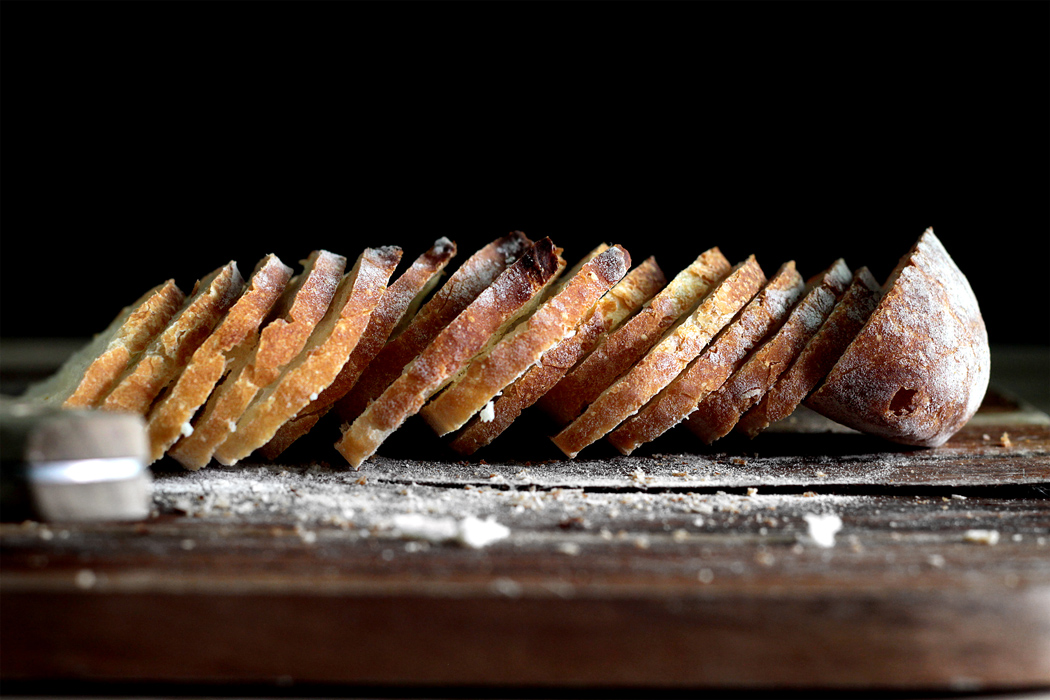 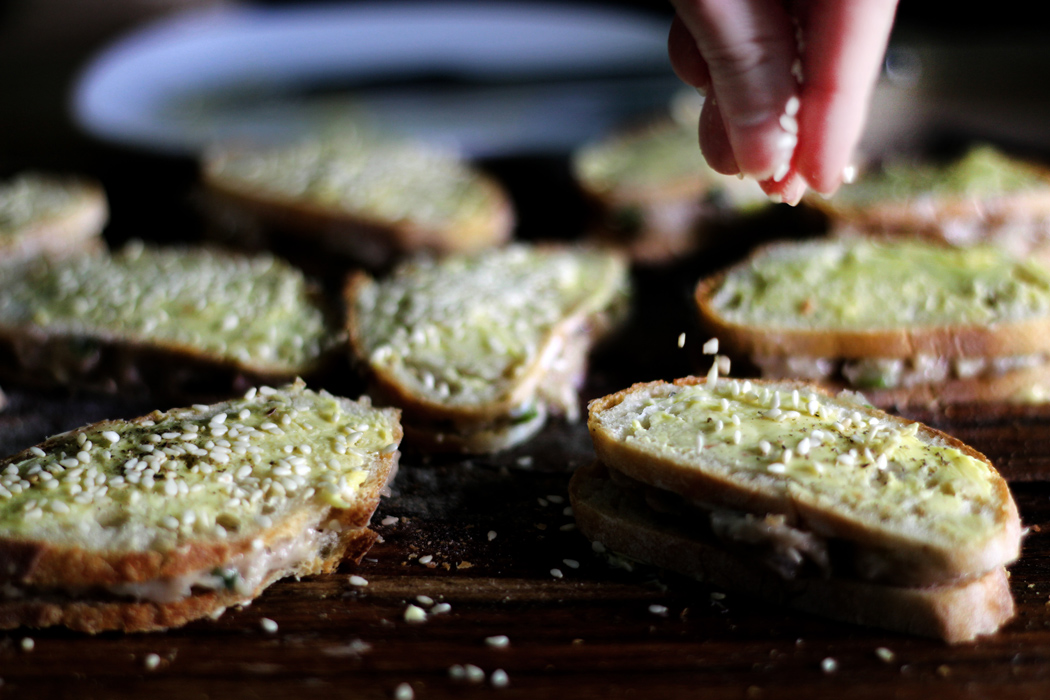 (OMG… why am I still talking?)  Ok, this is what it is.  Really smooth and velvety ground shrimp laden with cured pork fat and large shrimp-chunks throughout, flavoured with anchovy and garlic oil plus grated ginger, scallions and fish sauce.  Then you stuff it in between two pieces of thinly, very thinly, sliced baguette, and you smother them with an unapologetic amount of butter and white sesame seeds, then pan-toast them to crunchy, buttery, golden browned perfection.  Squeeze a bit of zing over the top, and there.  You’ve made a new sea-friend, too.  And you know it’s good when it leaves a sheen of light on your fingers… 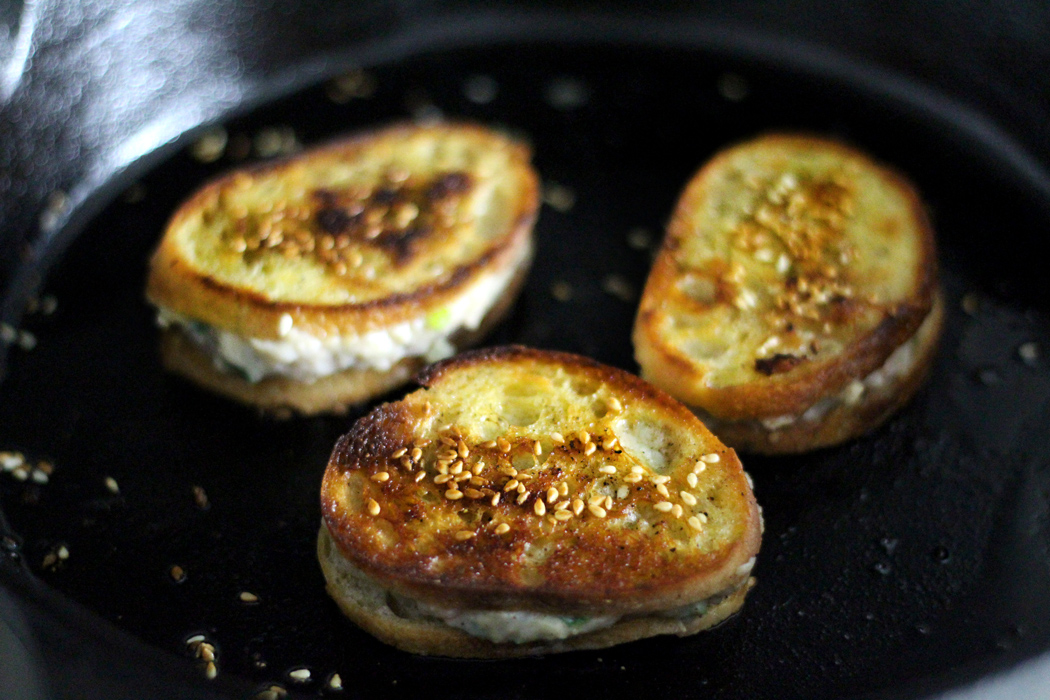 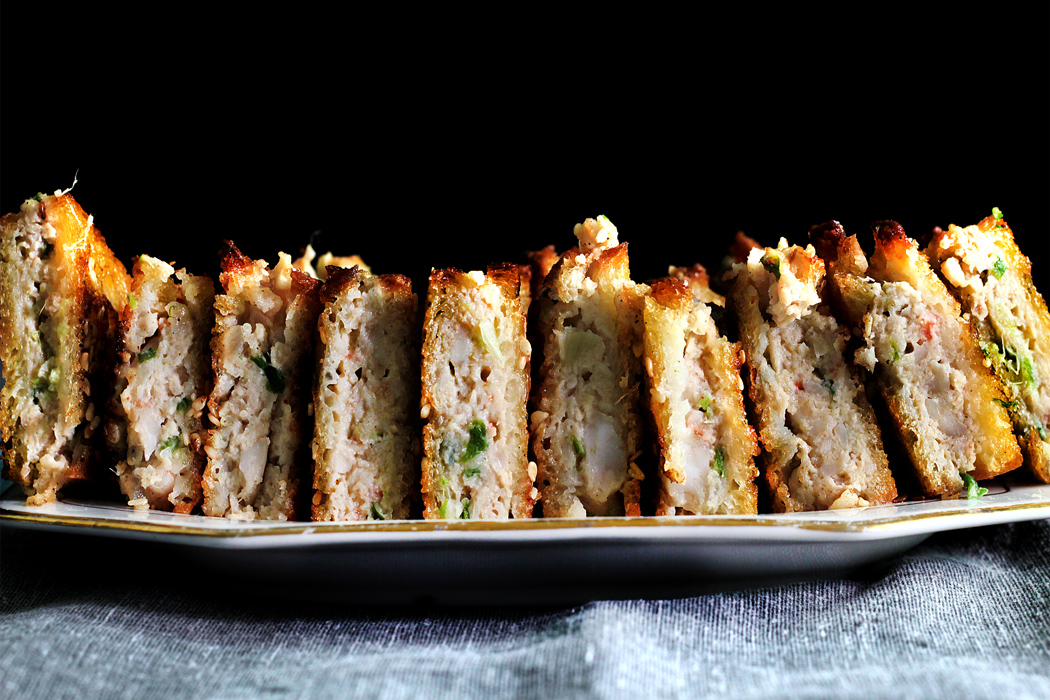 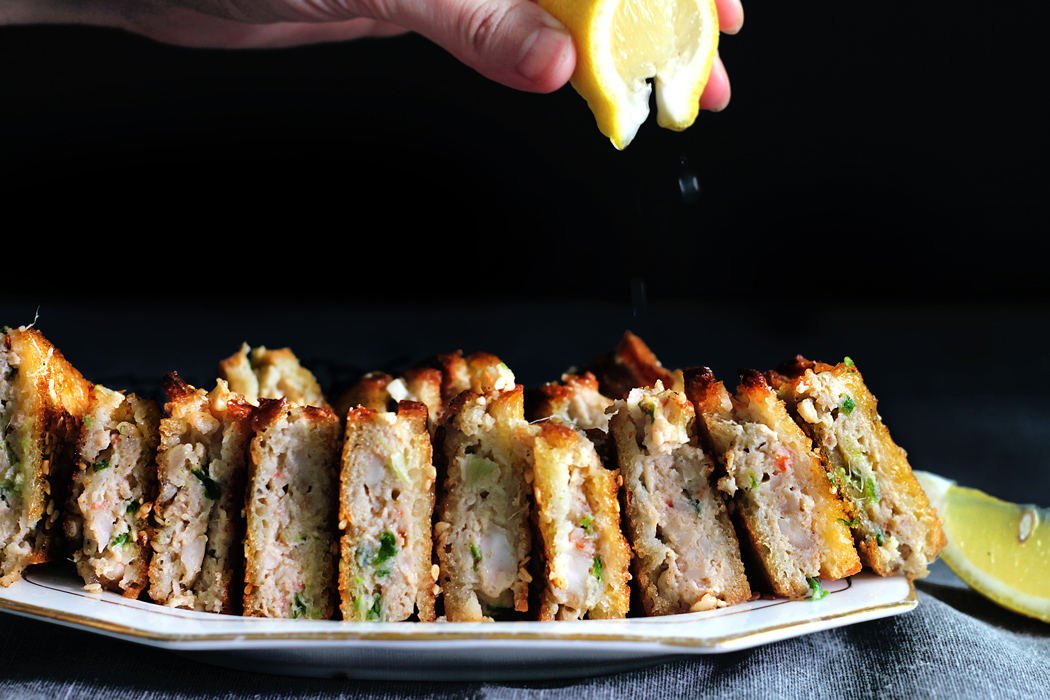 It’s best to choose firm/snappy shrimps for the filling so it doesn’t taste mushy.  For convenience and economic reasons, I would strongly recommend frozen medium-sized tiger shrimps that are already peeled and deveined.  The weight for the shrimps were measured after thawing, which can be quite different than still frozen due to the amount of water they shed, so take note.

And if there was any confusion regarding what’s “fat-slab” from pancetta/guanciale/prosciutto, it’s basically the fat-layer trimmed off from these cured pork-products.  You can trim it off yourself, or simply go to the deli/cold-cut section in the market and ask for their trimming, which they were probably gonna throw away anyways.  They are flavour bombs of porky proportions as I learned it from a meatball recipe from Mario Batali.  Do not underestimate them.

To make the filling:  Heat up 2 tbsp of olive oil in a skillet over medium heat.  Add the anchovies and break them apart with a wooden spoon, and cook until they’ve melted into the oil.  Add the minced garlic and cook until fragrant.  Turn off the heat and let the mixture cool down completely.  In a food-processor, puree 4.6 oz (130 grams) of shrimps with ground pork, fat-slabs from guanciale (or pancetta or prosciutto) and cornstarch into a smooth paste.  Then add the remaining 6 oz (170 grams) of shrimps, and pulse just a few times until they are cut into large chunks (careful not to over-chop them because we want large pieces of shrimps throughout).  Transfer to a large bowl and add the cooled anchovy/garlic oil, grated ginger, diced scallions, fish sauce and ground white pepper.  Mix until evenly incorporated.

You can make the filling the day ahead, covered with plastic wrap and kept refrigerated.

To make the shrimp toasts:  Slice the baguette very thinly with a serrated knife, about 1/8″ (3 mm) thick.  Fill a generous amount of the shrimp-fillings in between two slices of baguette (I’d say the ratio between the bread and the filling is 1:2), and press it gently to help the bread stick to the fillings.  Repeat until you’re finished with all the fillings.  Smear a good, shameless layer of unsalted butter on both sides of the toasts, and sprinkle lots of white sesame seeds on both sides.

Heat up a large, flat-bottomed skillet over medium heat.  Cook the toasts until golden browned on both sides, and that the fillings are just cooked through.  Careful not to over-heat the skillet that the bread burns before the filling’s cooked.

Serve the hot, crispy and buttery shrimp toasts with a few wedges of lemon. 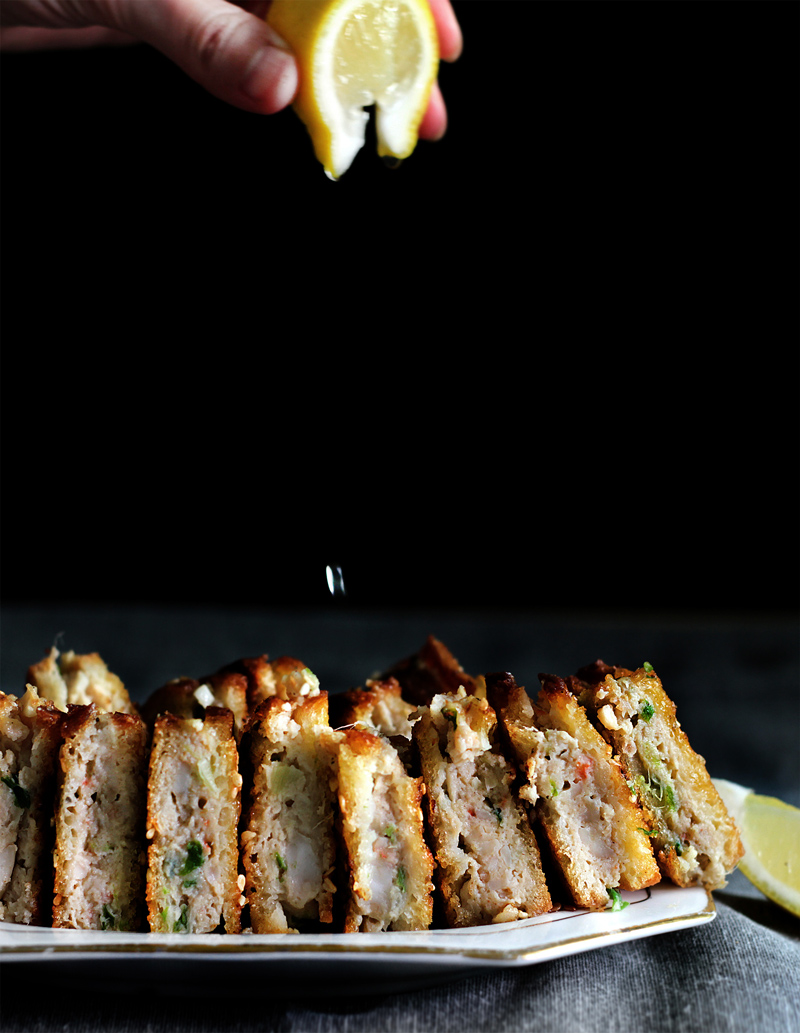