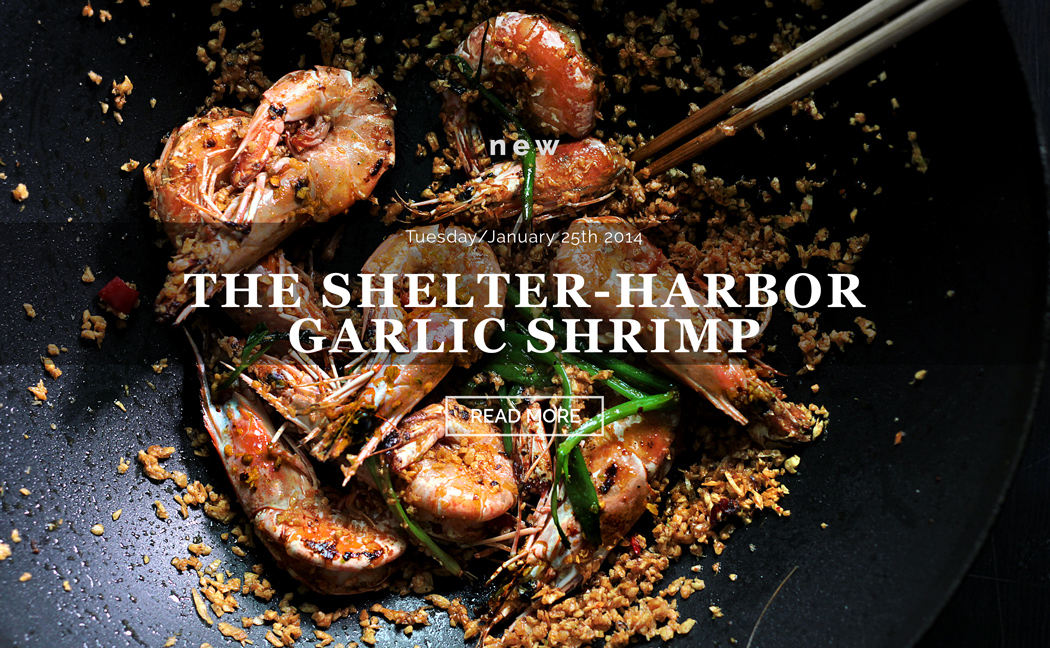 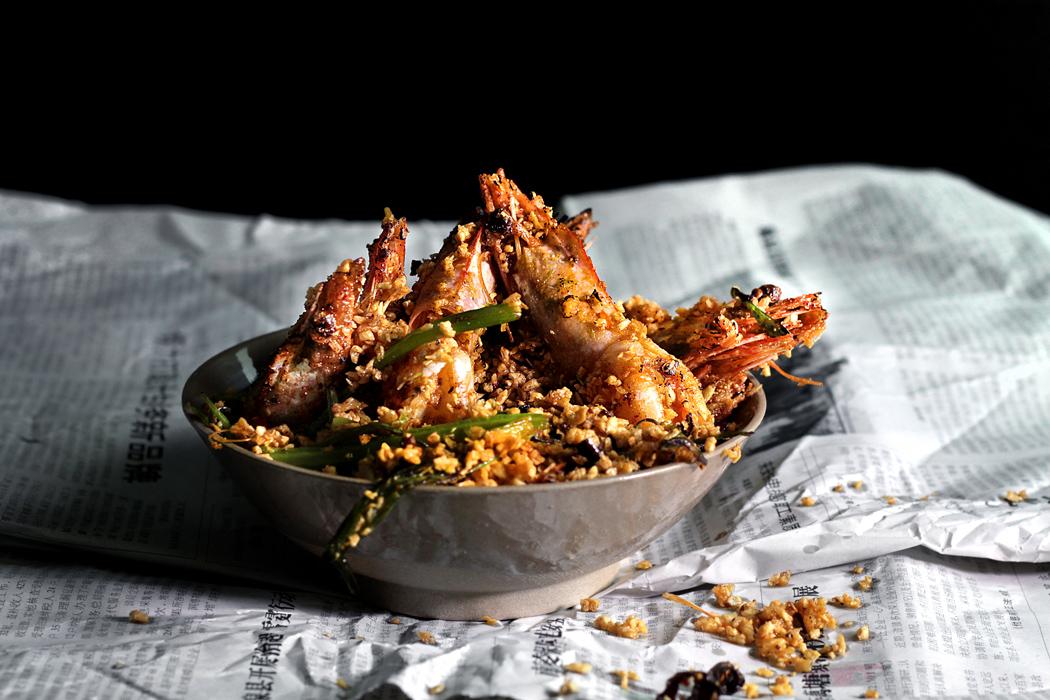 “WHERE THE FUCK IS MY TYPHOON SHELTER?”

What the hell’s going on?  Is… is there a forest fire nearby?  Nope, I don’t think so!  Has a meteor hit China and created tidal waves of dust clouds that’s taking forever to settle?  Nope, nope but I wish!  But then what the hell in this apocalyptic country is going on that I can’t see beyond five buildings for the past  six consecutive days?!  I mean seriously, I could duct tape myself naked to the window and I doubt my neighbours would have enough visibility to notice!  I could hang a freakin’ brisket outside my apartment and it’d be smoked up like hickory and death!  I’d laugh at these photos if I hadn’t realized I live here, too… 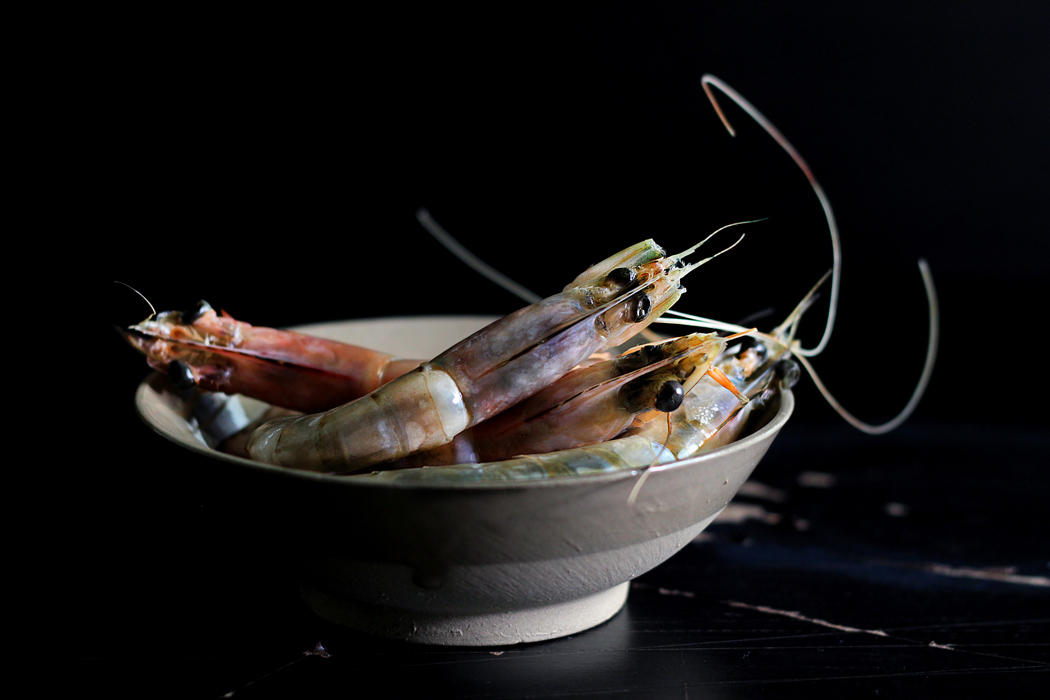 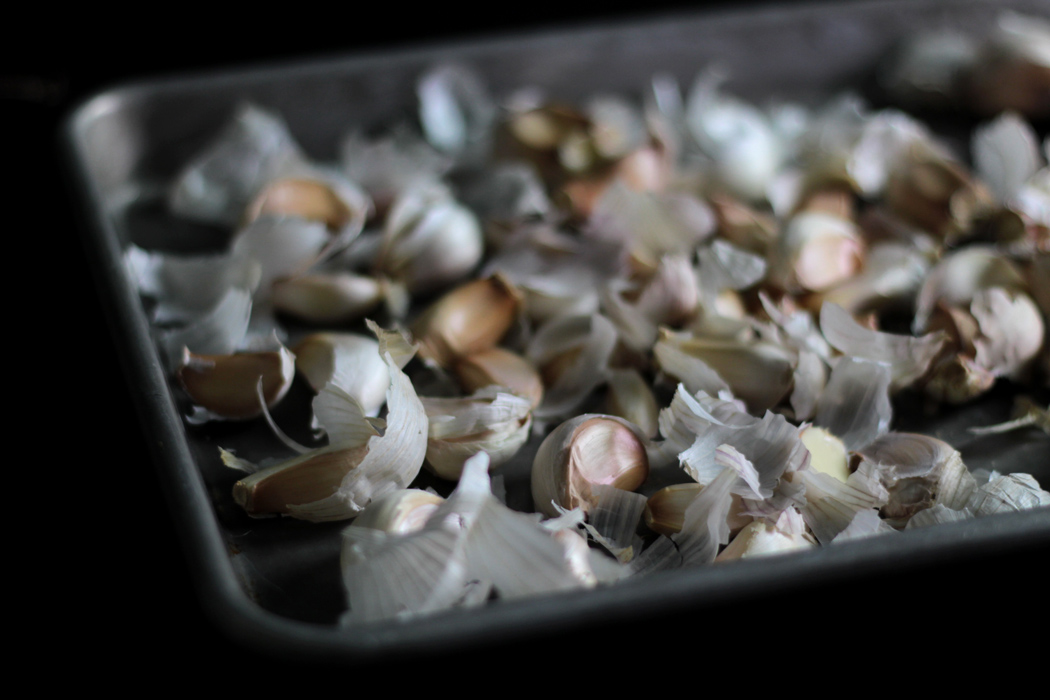 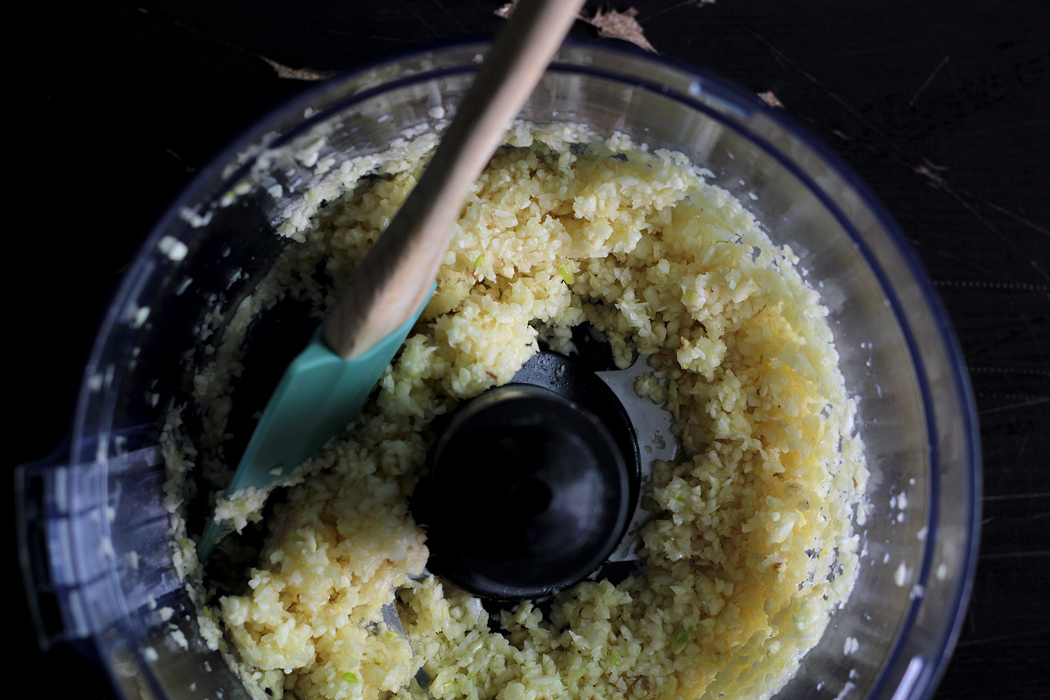 Aaaarrrggghhh it’s too depressing to even… no, no I’m too pissed to even chat which is a shame because this dish deserves my every last bit of dying enthusiasm to gush over, but now I only see anguish and mockery in everything.  So before I can soil the fun and scream “fuck shrimp!” uncontrollably, let me quickly do this justice, because you really really need this on your table.

(Deep breath with my triple air-purifier blasting…) Have you heard about the typhoon-shelter garlic crabs from Hong Kong, an iconic culinary heritage from a bygone sentimental and nostaligic time?  This thing, is a legend.  A “fisherman’s” dish back in Hong Kong’s fishing-village-era, of hot-woking fried crabs together with a crazy boat-load of fried garlics and chilis, releasing aromas that will draw salivation from the mountain nearby.  It became so popular, it outlived the time it was born into and became, to this day, immortal in every dai-pai-dong and seafood restaurants in Hong Kong.  It even outgrew crabs, extending its awesomeness to every types of crustaceans that crawl this earth.

If I were to eat one thing, and one thing only during my Hong Kong-retreat, this would be it. 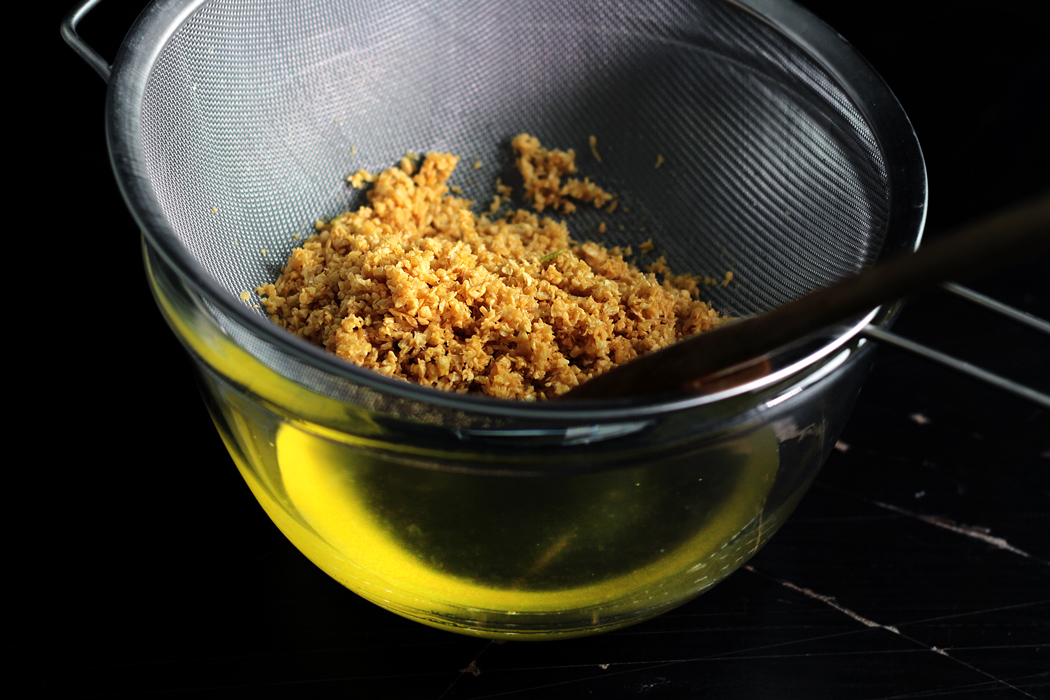 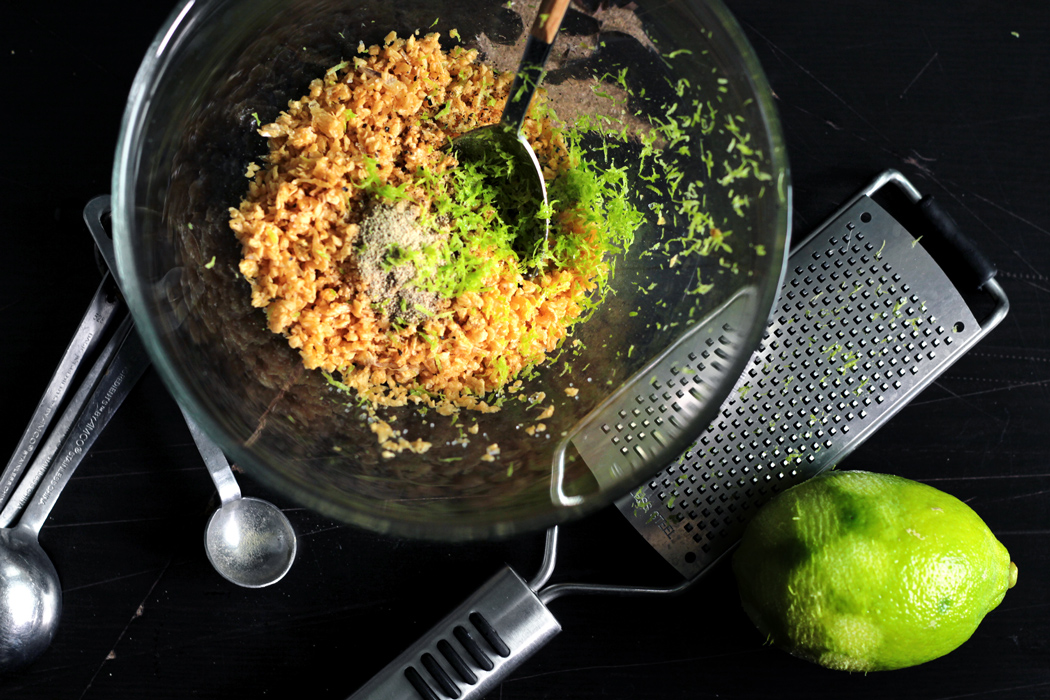 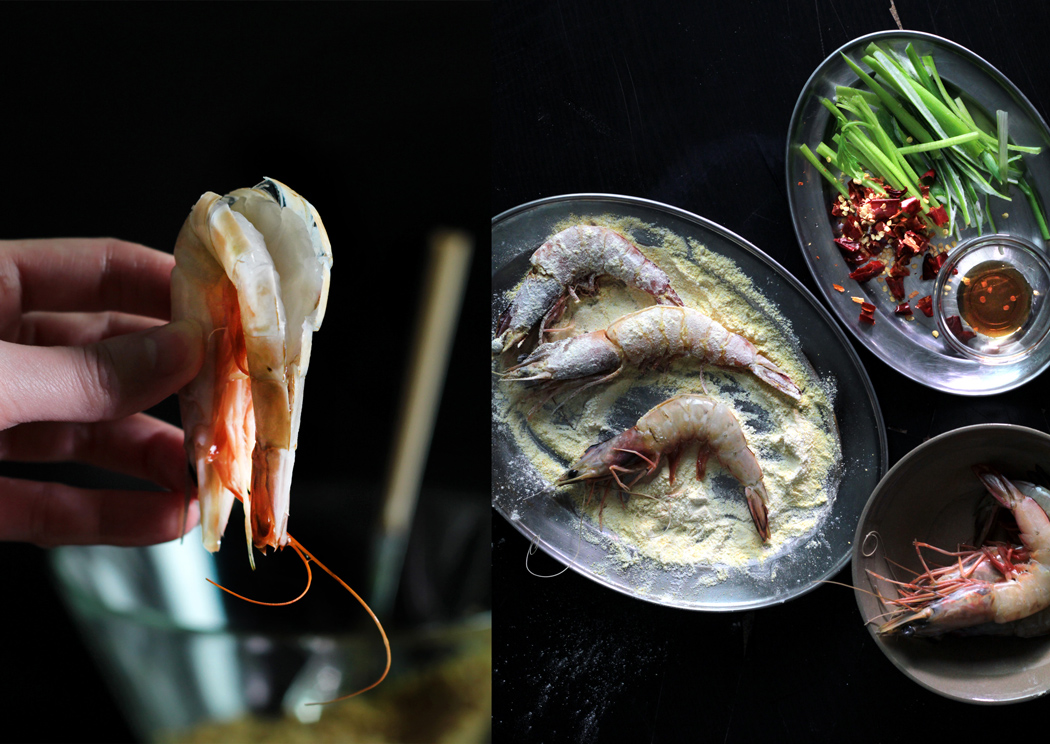 You want this.  You need this.  Looks intimidating but is actually quick and easy to make, and it’ll be your latest addiction.  Trust me.  I’m in too much negativity right now to gush over anything if not facts.

Facts like the irony of me saying I go to Hong Kong for a breather now.  Did I mention that I wasn’t very fond of Hong Kong, and now I go there for a breather?  It’d be equivalent to say that it’s relaxing to go to McDonald’s to take a dump.  Oh shit… I told you we shouldn’t go there.  Let me put myself back into the straitjacket where I’ll behave myself… 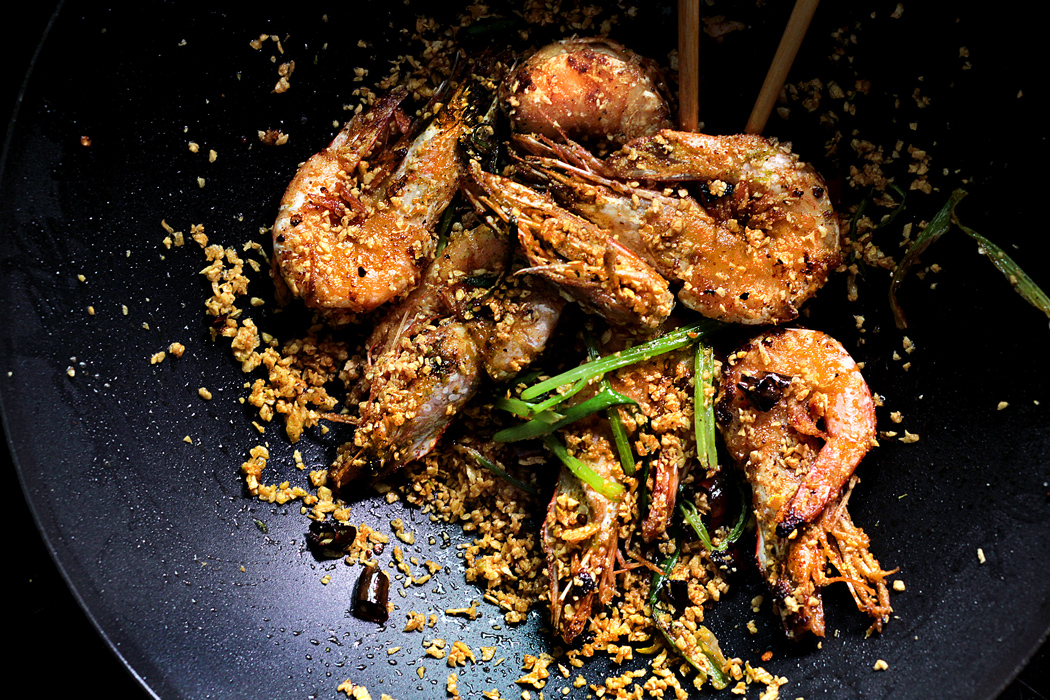 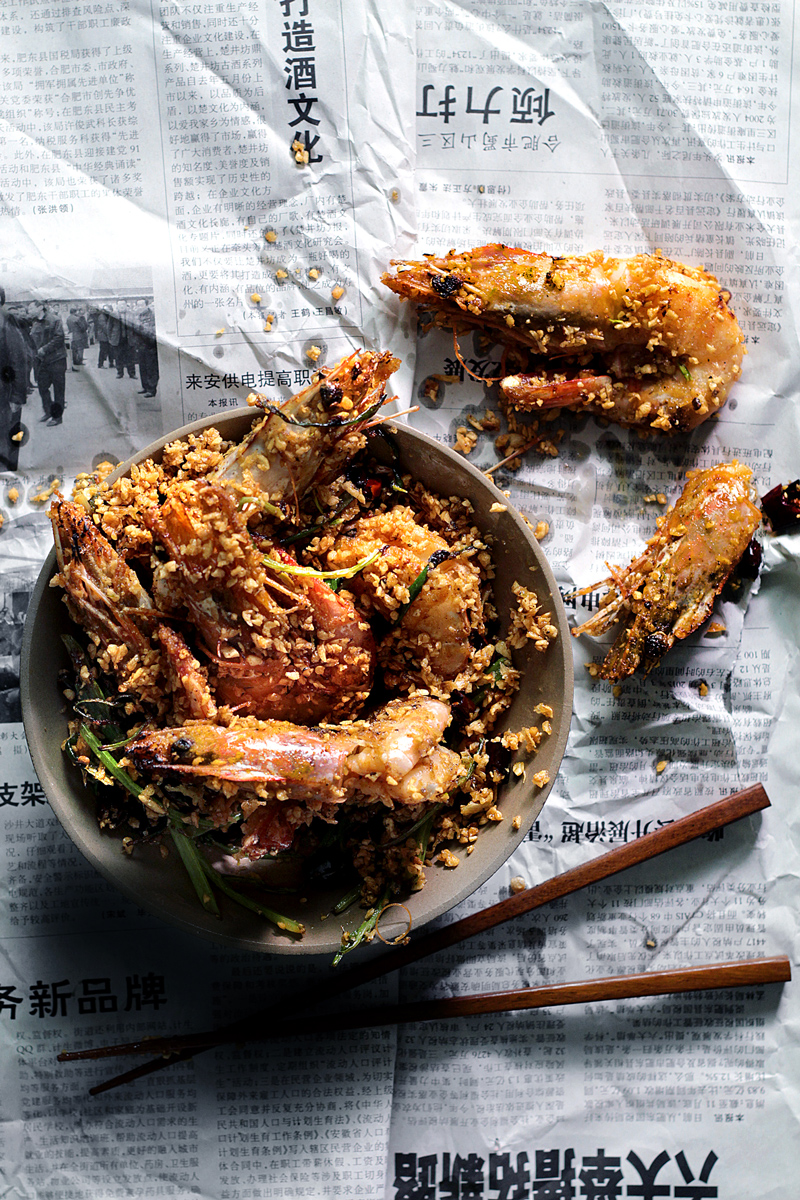 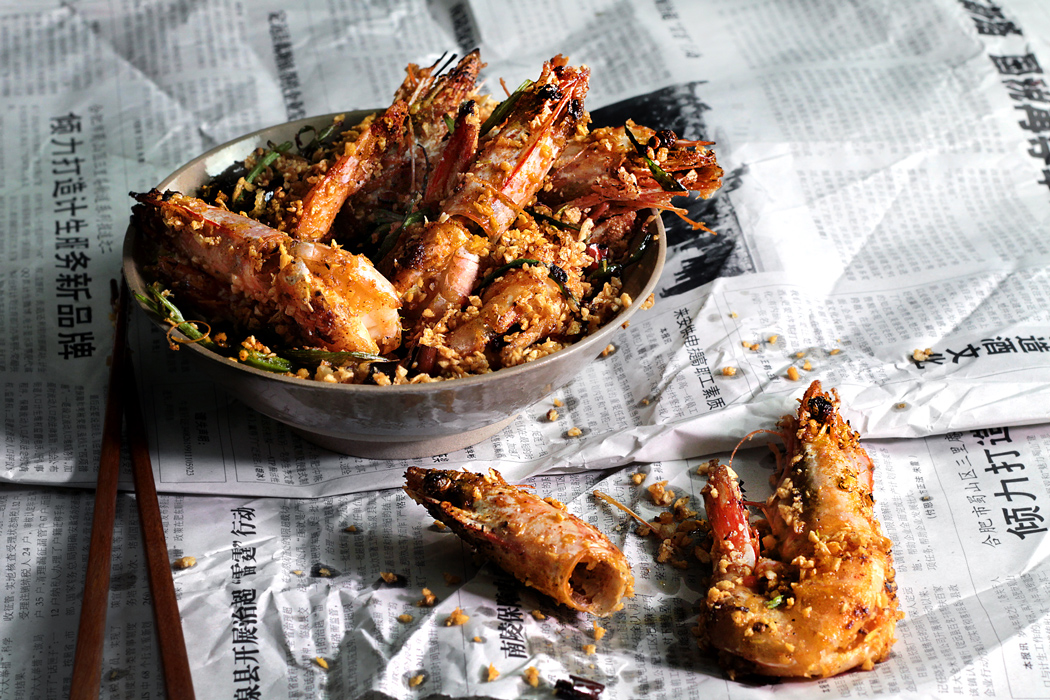 Even though it’s really fast to make fried garlic, I still like to do it in large amount and freeze the extra for whenever I need it.  It comes very handy in sprinkling onto savoury oatmeals and noodle soups.  So we’re making twice the amount this dish will need (or if you want to double the recipe for a bigger crowd, you’ll need all of the fried garlics).

If you don’t have fish sauce, I know it’ll be very tempting to just replace it with salt, instead of making a trip to buy a bottle.  DON’T.  It will make a night-and-day difference in the depth of flavour, and… just don’t.  Buy a bottle of fish sauce.  And also, while we’re at it, don’t think about using peeled shrimps either.  The shell will give a ton of flavour to the frying oil, which is then going to give a ton of flavour to the garlics, and if your shrimps have semi-soft shells, they can even turn into crispy deliciousness.  Oh no what?… please don’t ask me if you can use head-less shrimps… just when I thought we were getting along so well!?

To make the fried garlic:  Pulse the peeled garlic cloves in a food-processor until finely minced.  On the side, set up a large fine sieve resting over a large bowl.

Warm up (not hot) 1 cup of vegetable oil in a wok/pot over medium-high heat.  Drop a piece of garlic into the oil, and if it slowly bubbles up and floats to the surface, the oil’s ready (remove the tester-garlic or it’ll burn).  Lower the heat down to medium, then add all the garlic at once.  Keep stirring and keep stirring with a wooden spoon (don’t stop stirring or the garlics close to the edge of the wok/pot will brown faster) until the garlics start to turn into pale-golden (think lightly roasted peanuts).  Turn off the heat completely at this point, and keep stirring with the residual heat.  Once the garlics turn into light-golden, immediately drain them through the fine sieve.  You want to remove the garlics from heat just a little earlier because they will continue to darken into medium-golden once drained.  Any darker than a medium golden-brown will taste bitter.  You should have about 1 1/2 cup of fried garlic.

The fried garlic could stick to each other after cooking, so break them up with a fork and divide in half.  Freeze half in an air-tight bag for next use.  Reserve the garlic oil.

To make the typhoon-shelter garlic shrimp:  Mix 1/2 of the fried garlic with 3/4 tsp of ground white pepper, 1/4 tsp of ground black pepper and the zest of 1/2 a lime.  Set aside.  Have all the dried chili, scallion, Asian celery and fish sauce ready on the side.

Use a scissor to cut the shrimp-shells open along the back, all the way to the tails.  Devein the shrimps, then score the meats open with a small knife without cutting through (see picture).  Evenly mix together 2 tbsp of all-purpose flour and 2 tbsp of fine cornmeals, season with a small pinch of salt.  Light coat the shell of the shrimps in the flour-mixture, then dust off any excess flour.  Set aside.

Heat up 3 tbsp of the reserved garlic oil in a wok/deep skillet on high heat until smoking.  Lay the shrimps flat on one side in the wok/skillet to fry, then don’t move them.  Once the first side is blistered and crispy, add the diced dried chili and turn them over to fry the other sides.  It’s important not to stir them or move them around too much, otherwise they won’t fry properly.  Once both sides are crispy, add the scallions, celery and 1/2 tsp of fish sauce, stir gently and cook until the scallions have just wilted.  Now turn off the heat completely, and add the fried garlic-mixture, and the remaining 1/2 tsp of fish sauce.  The residual heat is enough to do the rest of the job, but won’t burn the garlics.  Fold gently again to have everything combined.

Serve immediately, meaning you suck the heads, chew on their crispy legs, down the meats and spoon the garlics over rice or savoury congee.  It is excellent on both. 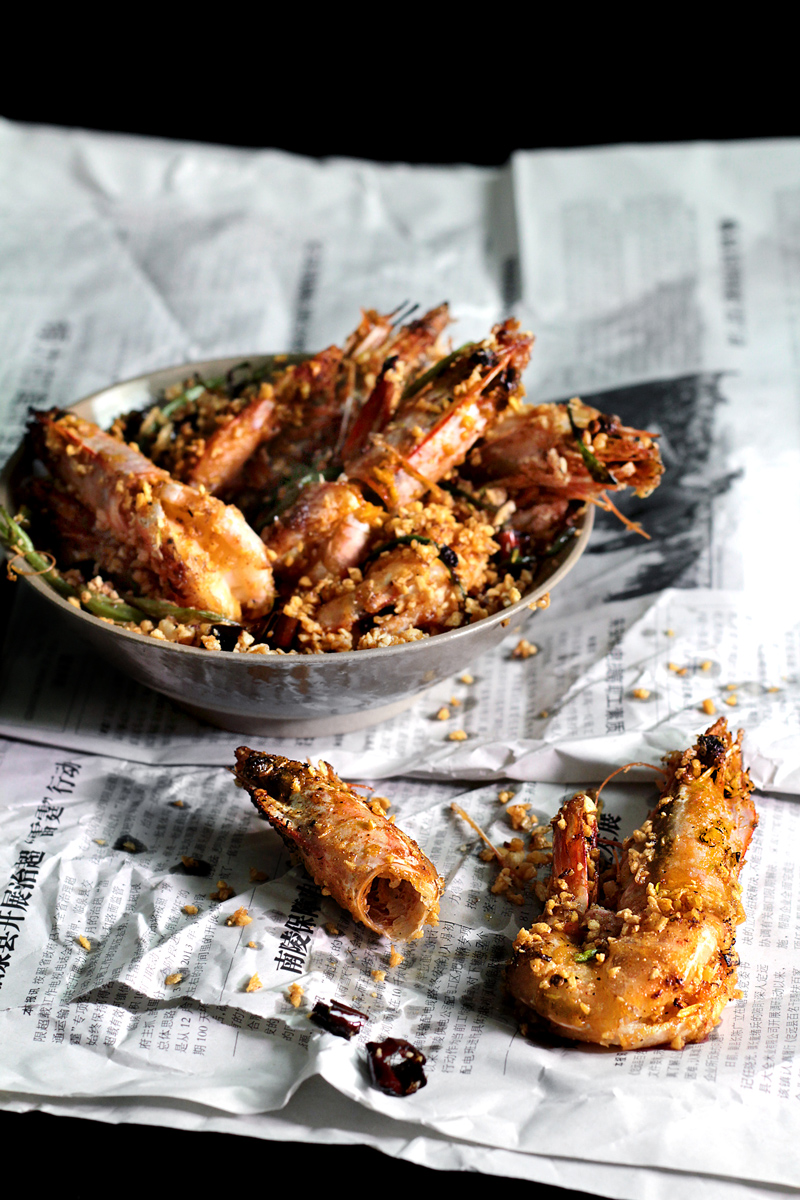 almond tofu x 2
HOW TO EASILY SOUS-VIDE IN OVEN, WITH OR WITHOUT WATER
NASHED-UP HOT CHICKEN CUTLET SANDWICH