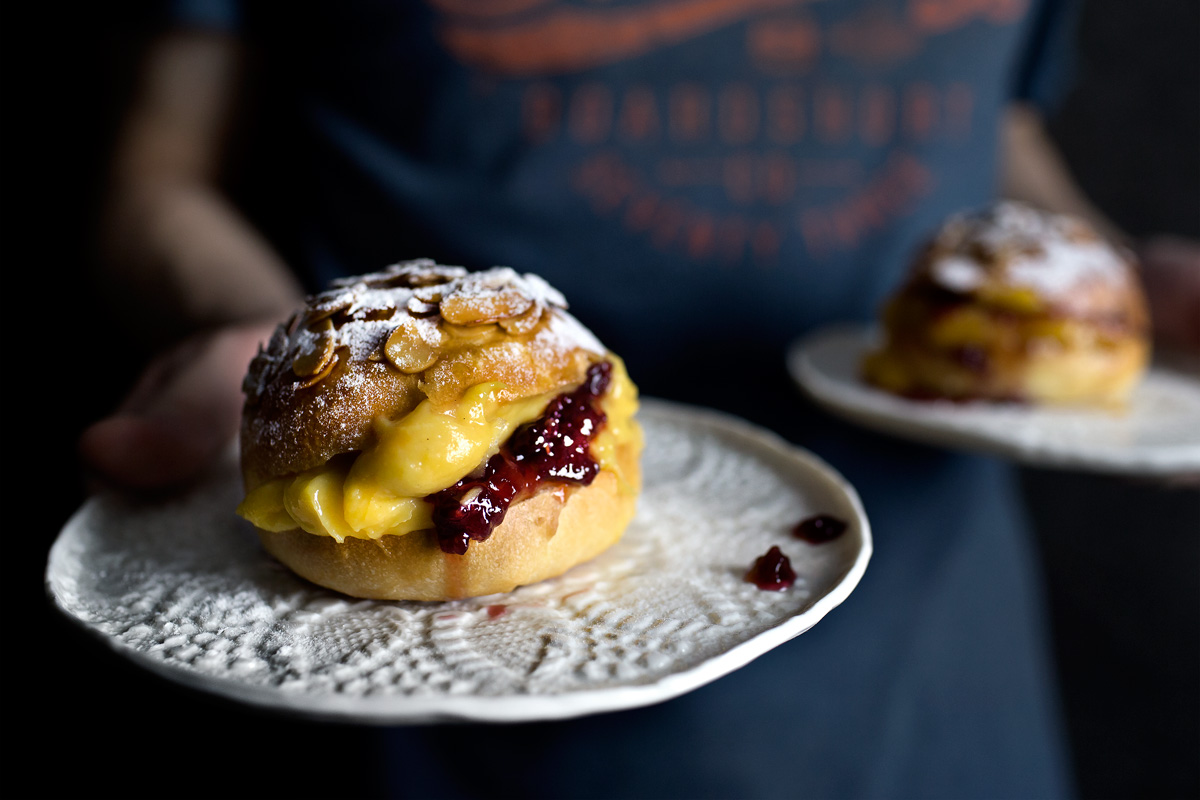 These super gorgeous crochet-printed side-plates are from the lovely DishesOnly.

TO MY SHAMELESS AND UNDESERVING SELF I SAID, YES I’LL HAVE FOUR OF THOSE PLEASE

This post, on top of the rare fact that it’s the third dessert-recipe within two weeks, is also going to take a rather unconventional introduction.  Instead of my usual babbling on my, more often than not, unpleasant stories/inspirations behind a certain recipe, I’m going to gratefully credit this entire post to the unexpected blogging-perks that have been recently showering my life like a long-awaited rainfall.

First of all around 2 weeks ago, a mindfully packaged box from Italy oozing the kind of anticipation and excitement not even the strongest duct-tape can confine, quietly arrived at my doorstep.  Carrying with it, among other gorgeous sample-ceramics, were 4 beautiful crochet-printed plates that marked the exciting collaboration between me, and the lovely Italian ceramic company – DishesOnly.  In all honesty, calling this sort of thing a “collaboration” where I shamelessly ask for things without paying, sounds all too undeserving on my part because I feel like I’m taking advantage.  But when I saw these unbelievably delicate and understatedly elegant side-plates called crochet, I simply couldn’t help my greedy self.  The desire of having them among my now-seemed-comparatively-unattractive collection of plates, overrode any remaining ounce of self-consciousness.  So to my shameless and undeserving self I said, yes I’ll have 4 of those please. 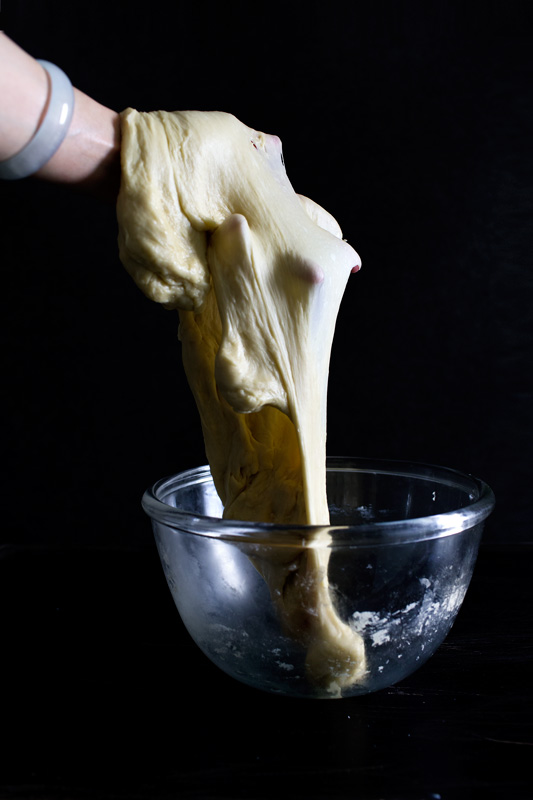 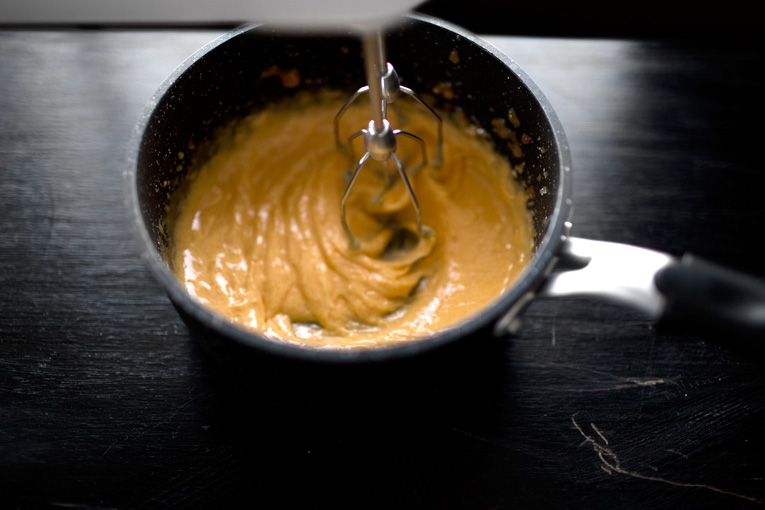 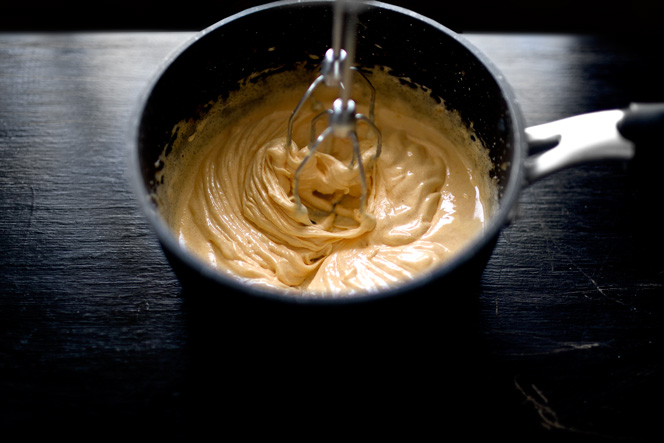 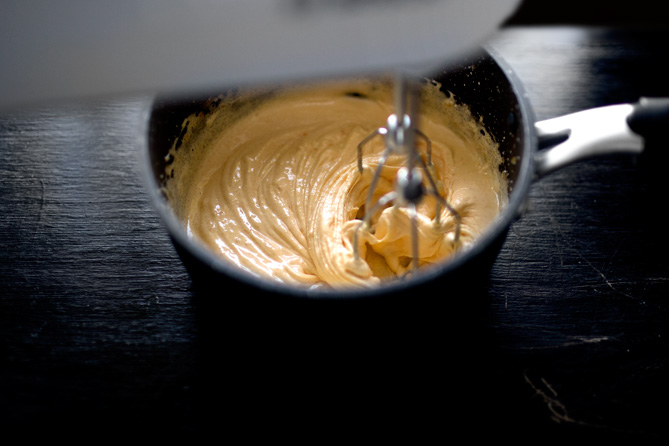 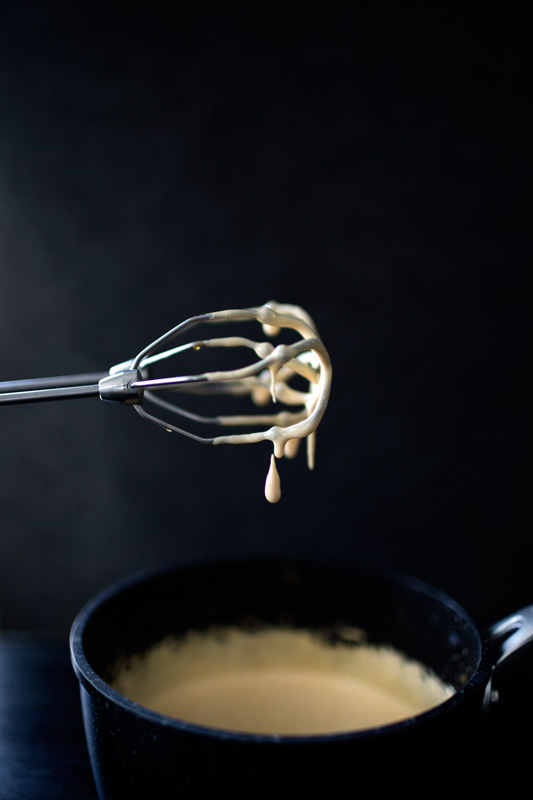 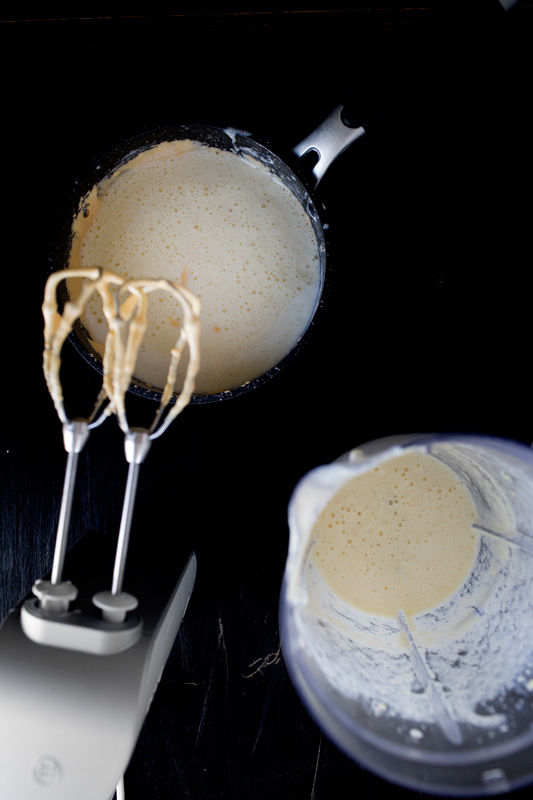 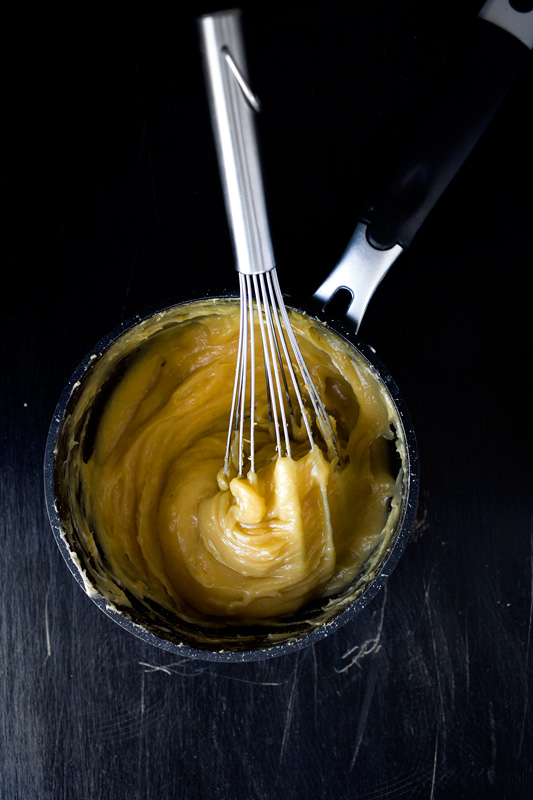 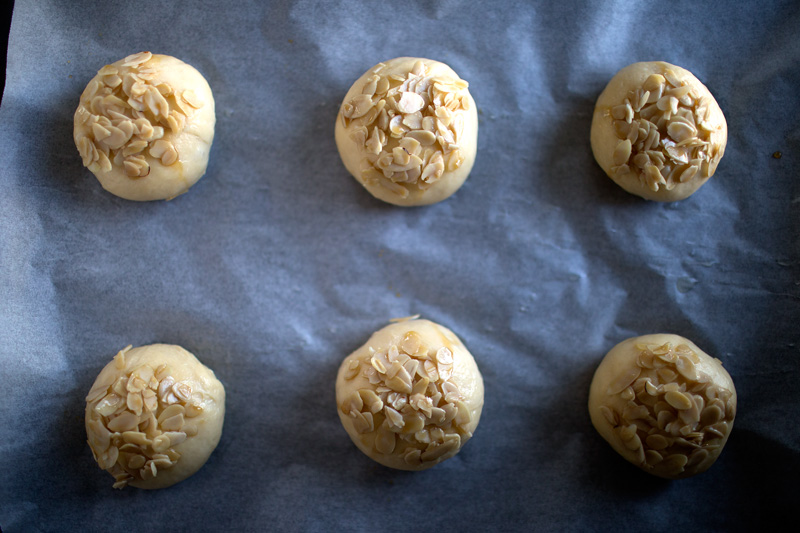 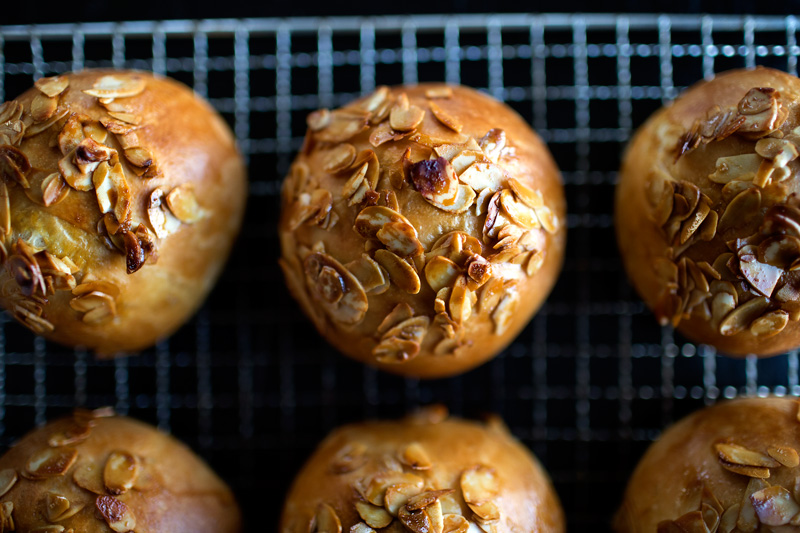 But after 2 weeks of unproductive staring and caressing (ok maybe, just maybe, a bit of whispering as well…), then comes the difficult part where I actually have to think of something worthy to put on top, and truth is, I’m having a bit of trouble with that.  Because aside from the fact that I believe the only things you should serve these plates with, are simple jealousies lightly tossed with a dash of gloat, there’s something else that’s causing a bit of drought in my kitchen lately.  Which brings us, to the second blogging-perk that’s resulting in this marathon of dessert-recipes, so silly I don’t even know how to put it literally except for saying…

For the past couple weeks, I have been dining out, non stop, for free.

Yes… sitting on the panel for this year’s best restaurants in Beijing for a lifestyle magazine, is again the shameless and undeserving… moi.  Typically, this would’ve been a welcomed and gratefully held duty for someone who loves foods almost as much as she loves free meals.  But if you take into account that she’s also supposed to be blogging about what she cooks/eats AT HOME, preferably if not more often than, twice a week, then things can get a little more complicated.  I mean look, there’s the jerk-spiced pulled pork that I was going to make lovely tacos with, but instead, I spent the night stuffing my face with a boat-load of fancy sashimi.  Then I had the most exciting idea of turning in a savoury version of these peanut butter-lava sticky rice balls, pork-filled in Tteokbokki-style with spicy Korean chili sauce, but instead, I got tumbled in an avalanche of free-flowing tapas and paella.  Life… life is tough.

So I guess what I’m trying to say is, with my looted plates and never-ending free meals, I can only bring you yet-another dessert-recipe where I stuffed an obscene amount of pineapple custard and raspberry jam into mini, squishy and soft Hokkaido milk buns with crunchy honey shaved almonds on top.  The buns were made partially cooked roux as well as heavy cream, which gave them the rich moistness and pillowy softness that separates them from ordinary butter rolls.  They may be the only thing standing between you and eating this thick, glossy custard perfumed with the subtle fragrance from pureed pineapple straight out of a jar.  And if you used the buns warm out of the oven, and stuffed it with the custard cold right out of the fridge with just a tiny smear of raspberry jam for tartness…  Squishy and custardy.  Warm and refreshingly chilled.  Sweet with a shot of tartness.

Well, just saying, because you look like you could use some perks as well while I’m busy finishing mine. 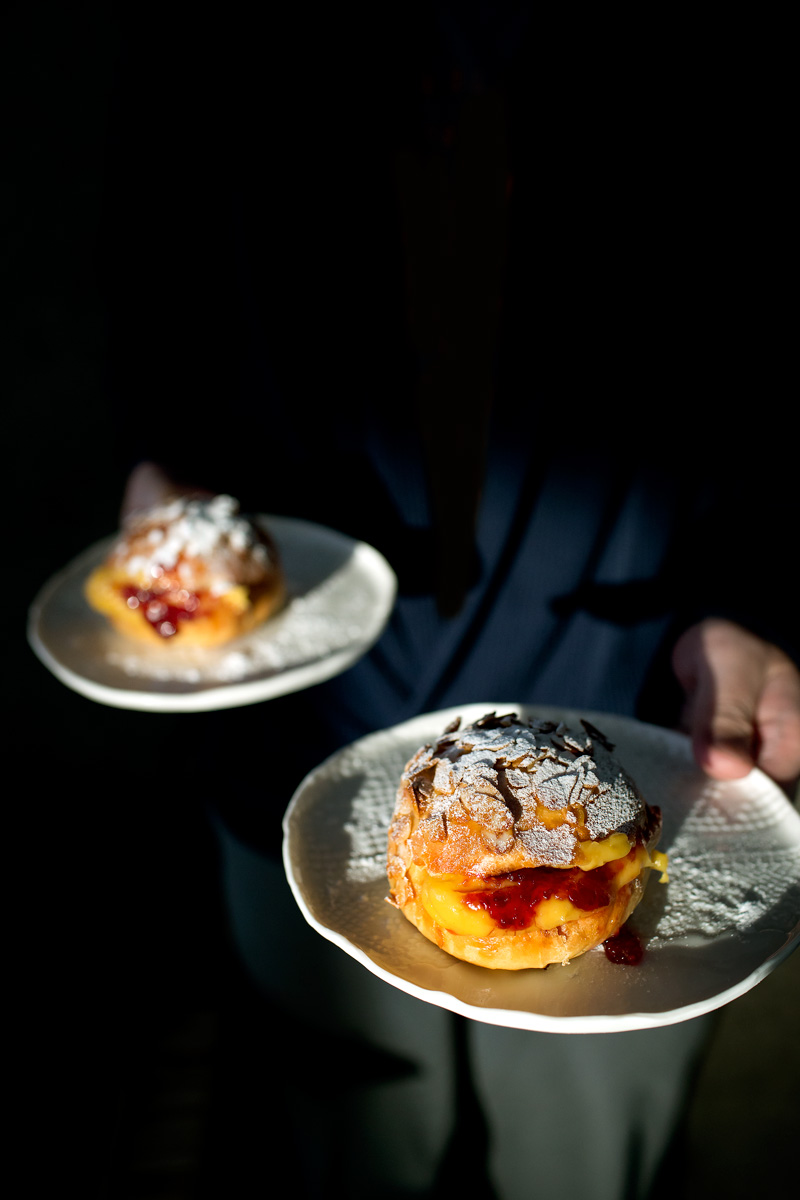 This Hokkaido milk bun-recipe is a streamlined, halved version from the dreamy Hokkaido milk toast, which took 1 extra step of fermentation but arguably resulted in a fluffier and more delicate texture (even though that recipe didn’t use the roux/tangzhong method).  So if you want to go the extra miles, you can also just half the original recipe to make these buns.  Then in terms of pineapple, I would use canned instead of fresh, which eliminates any issues of inconsistency in sweetness/tartness.  But of course, if you have a beautifully ripened and sweet pineapple laying around, by all means go for it. 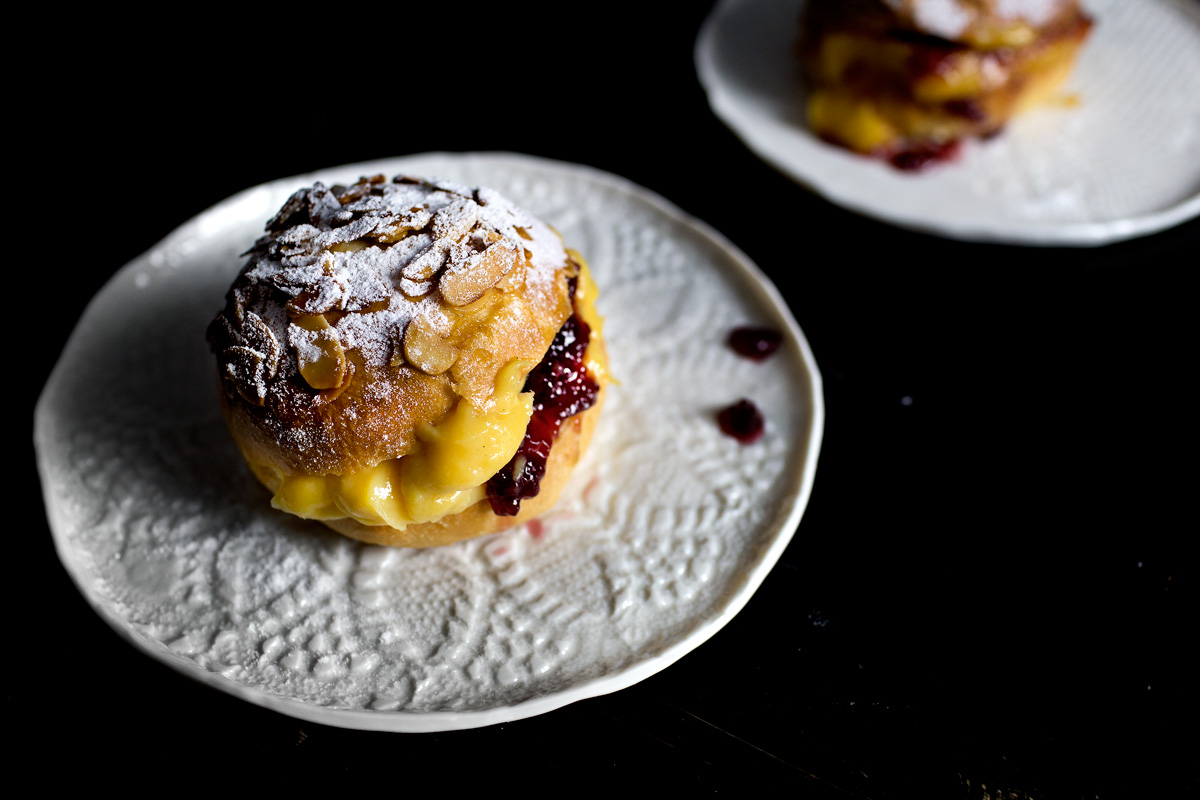 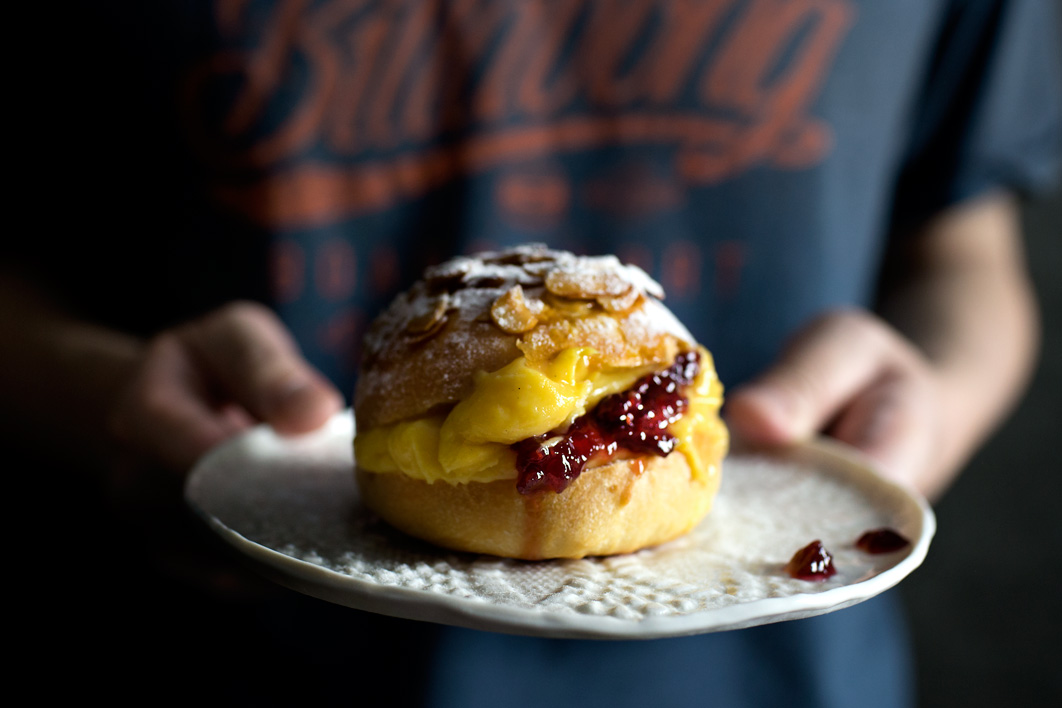 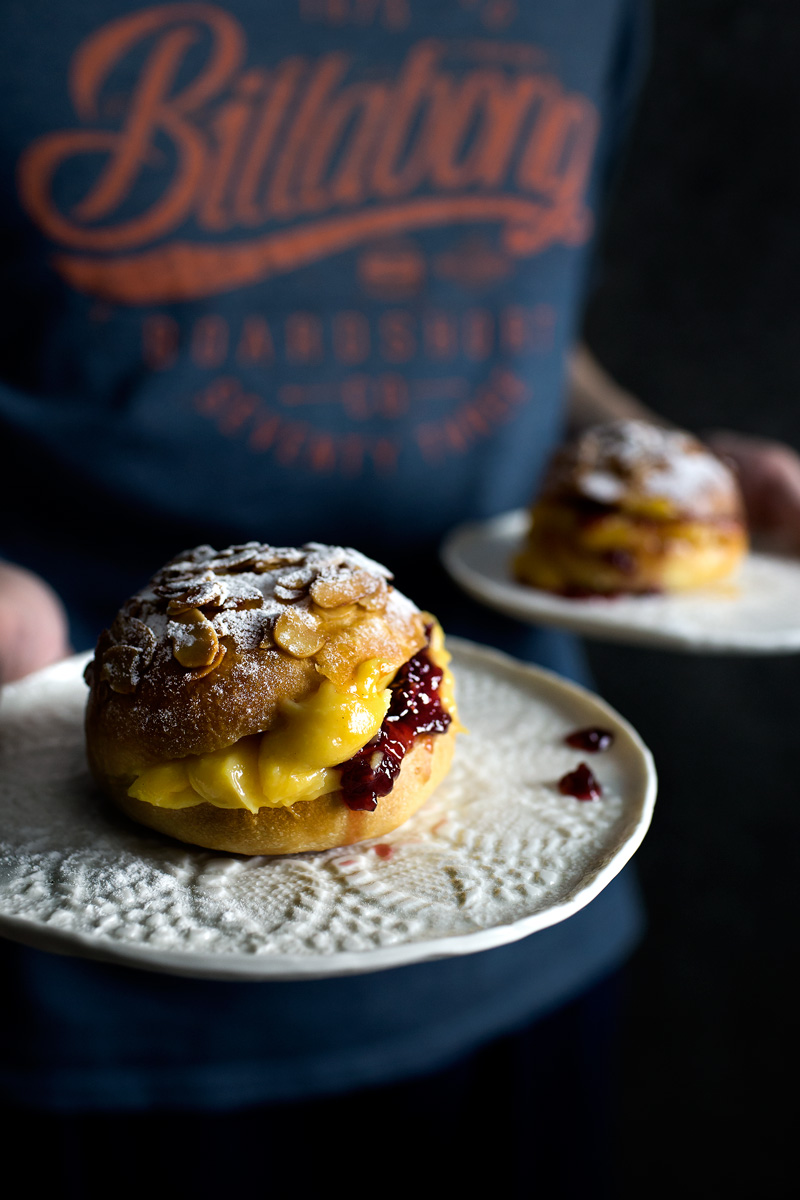