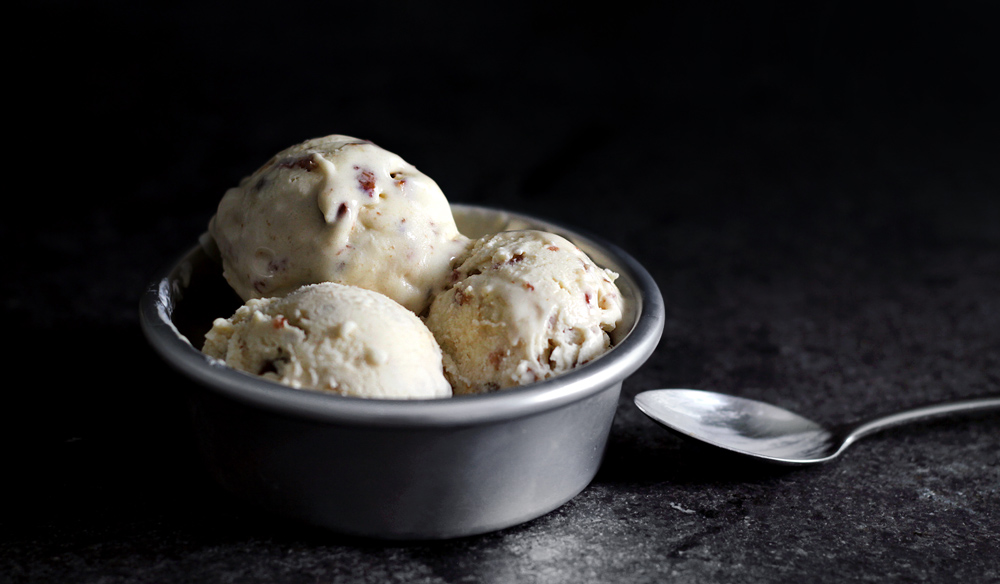 WOW… I mean… just WOW…  I know it looks like I should be addressing my every bit of amazement to this fine specimen of frozen dessert right now, which really doesn’t need anybody’s introduction to be quite honest I mean look at it.  But I’m actually, with all my fingers involuntarily shaking, not focused on the ice cream just then.  Truth is, I’m still hung over, mentally taken hostage, emotionally robbed by the malfunction of this blog that has turned a rarely beautiful Beijing weekend into 48hrs of computer science-nightmare (if you came here during the weekend and found “the fridge” empty, I’m sorry).  It was a crisis so beyond the language that I speak it almost felt Sci-Fi, like an alien invasion, a fire-breathing Godzilla attack on the island of Java-script-what-eh?  I’m ashamed to admit that under the complete chaos and panic, I was so close… this close… like one-push-of-a-red-button away to just wiping everything I’ve done and everything you guys have ever said in the past 10 days, in the effort to restore control…

I almost nuked it…  I almost ground-zeroed my blog… 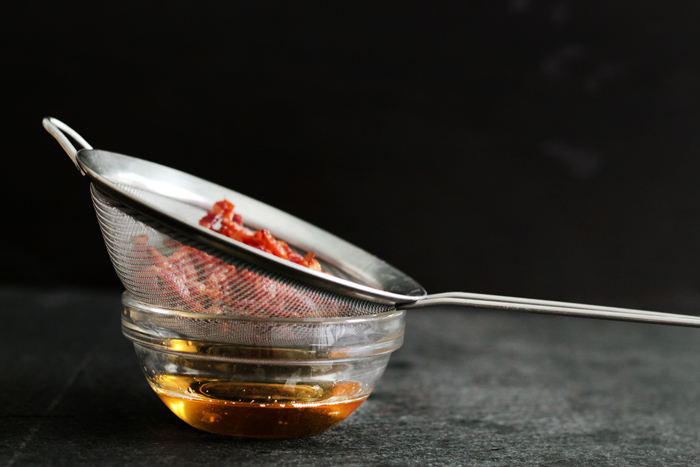 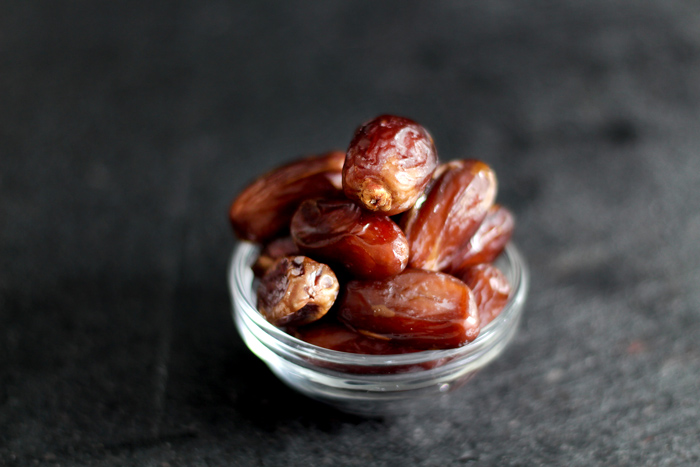 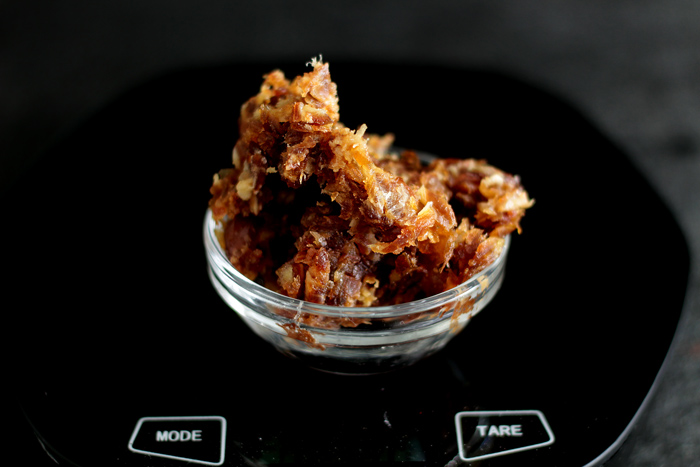 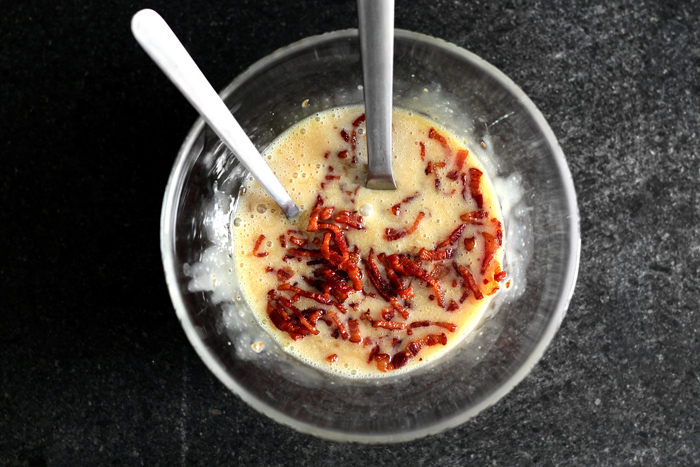 But as you see, you’re still here, recipes are still here, and I’m still here (squeezing my face and touching my hair in disbelief…).  Just like the reality in any predicable, apocalyptic movie, a last-minute hero swooped in (in this case, a less trigger-happy husband and a coding-jedi lady from freelancer.com), and averted the crisis.  All is good.  The missiles, are down.   The world, is saved.  And please, this is a movie that does not welcome a sequel.

But wobbling in an adrenaline-withdrawal post climax, I’m wondering what do the other characters do at this point?  Exhausted and sore I’d imagine, Spider Man probably soaked his suit in Downy, ordered a pizza, then popped in the Bring It On DVD.  And if you ever watched till the end of the credits in Avengers, a bunch of worn out superheroes sitting in silence and mindlessly feeding over a messy tabled filled with fast-food shawarma, was hilariously if not ironically, close to the less-exciting reality that we live in.  So I guess as of right now, I should be microwaving a pop-tarts while licking my wounds in privacy?  But no.  No, this episode stroke too personally and scarred too deeply that I couldn’t let the curtains down without a bang.  To mark this day, something that’s more fondly… even more momentous and infinitely more glorious, must overwrite the horror of the past few days and bring the finale it deserves.

I’m thinking… and I can’t think of anything else, but bacon-fat ice cream. 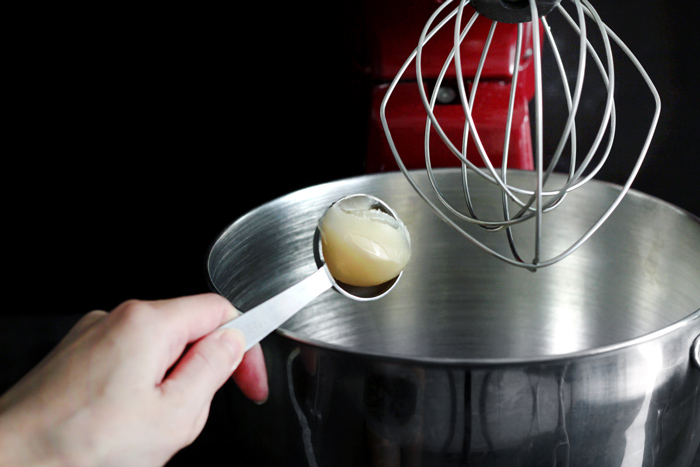 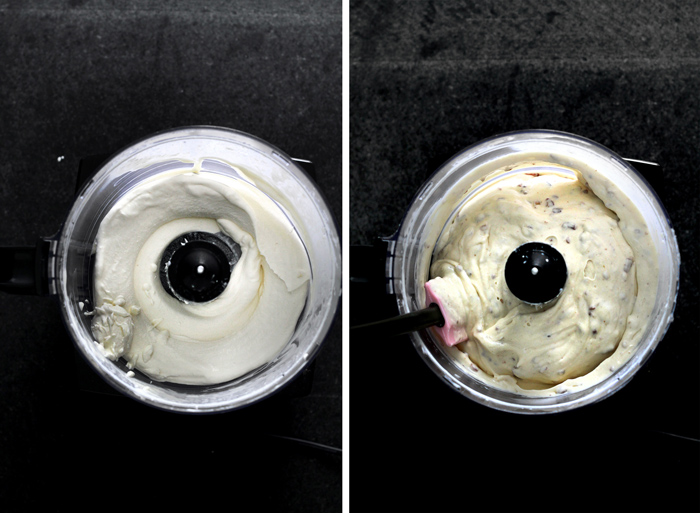 To be more specific, it’s ice cream enriched with bacon fat, flavoured with crispy bacon bits and brandy-soaked dates, which also bring sweetness in addition to the maple syrup.  Oh sorry when you said that’s absurd, I thought you meant absurdly good.  Because it is.  I trust that you’ve had those little toothpick hors d’oeuvre called “devils on horseback”, which is bacon-wrapped dates (or prunes) in all its sticky, crispy, fruity, sweet and savory goodness.  I first had it in The Spotted Pig in Greenwich who kicked it up a notch by adding bits of poached pears, and was instantly taken by its conflicted textures and flavours, a confused sense of deliciousness… perhaps the best kind there is.  Then the other day when I suggested that I would make a bacon fat ice cream (I can feel guilt just by typing it…), Jason replied “How about adding dates to it?  Just like devils on horseback!”.  Oh, who knew… double heroic rescue in a day!  But then, a few hours later… we both sort of regretted it…

I mean, this is an ice cream that shouldn’t be mentioned in June.  This is an ice cream that could only feel remotely safe and friendly amidst the bear-costume season known as winter.  Because forget about beaches and tank-tops.  In fact, if you have something against swimsuits, giving people a good carton of this ice cream as gifts would be a very good way to talk them out of wearing it, too.  Rest assured that this summer, you and your peers would spend it inside the safe comfort of an AC-blasted interior where you could justify wearing cardigans and sweat pants.

In the effort to mark the ending of a crisis with dignity, I might have created an entirely new one… 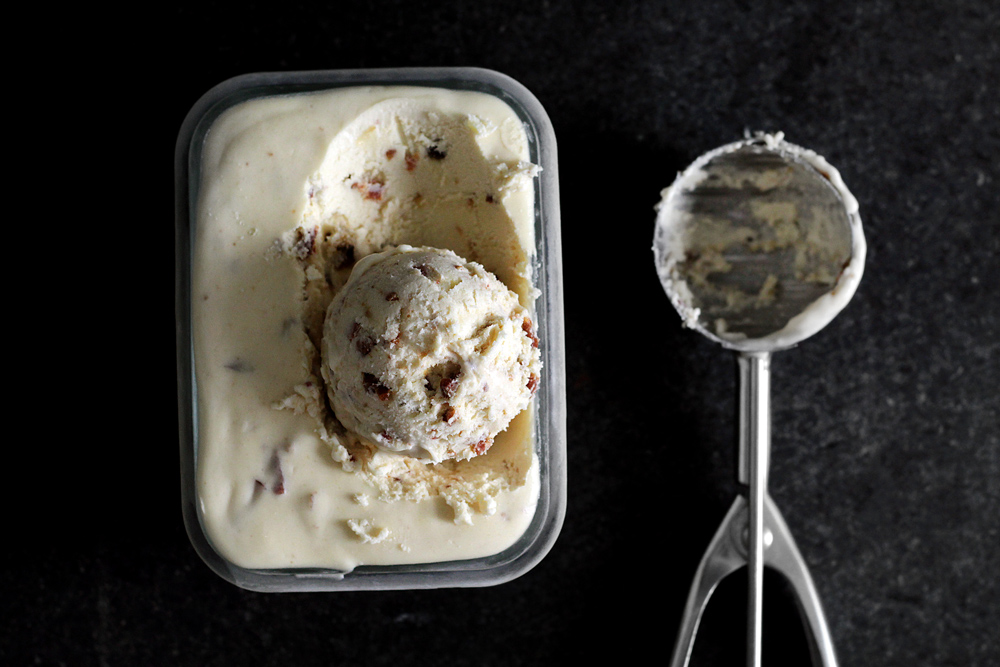 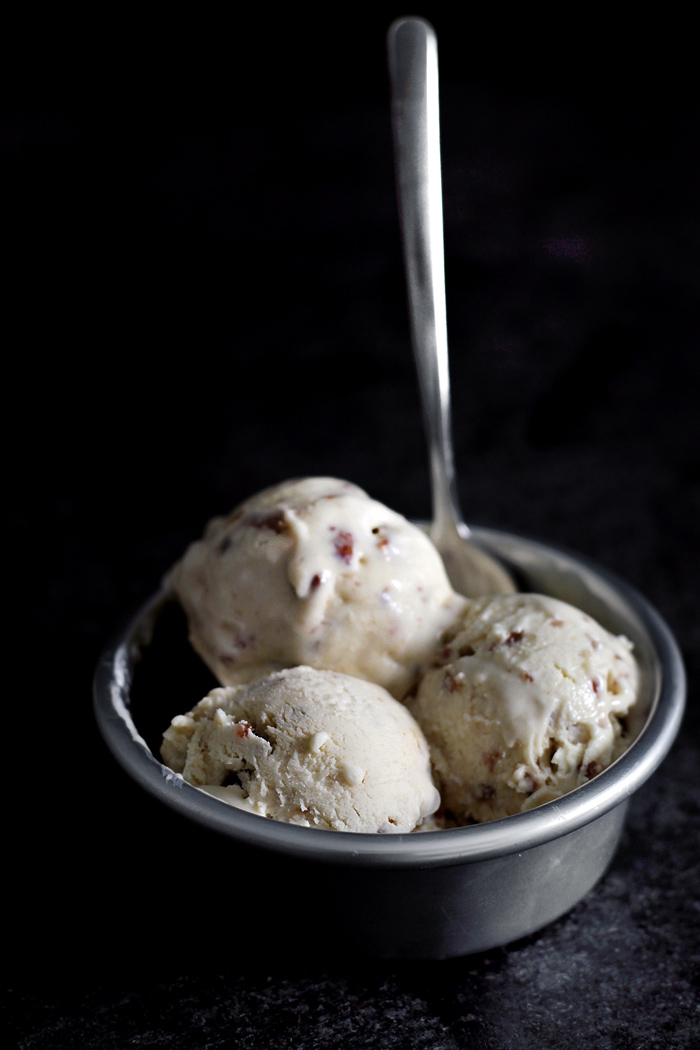 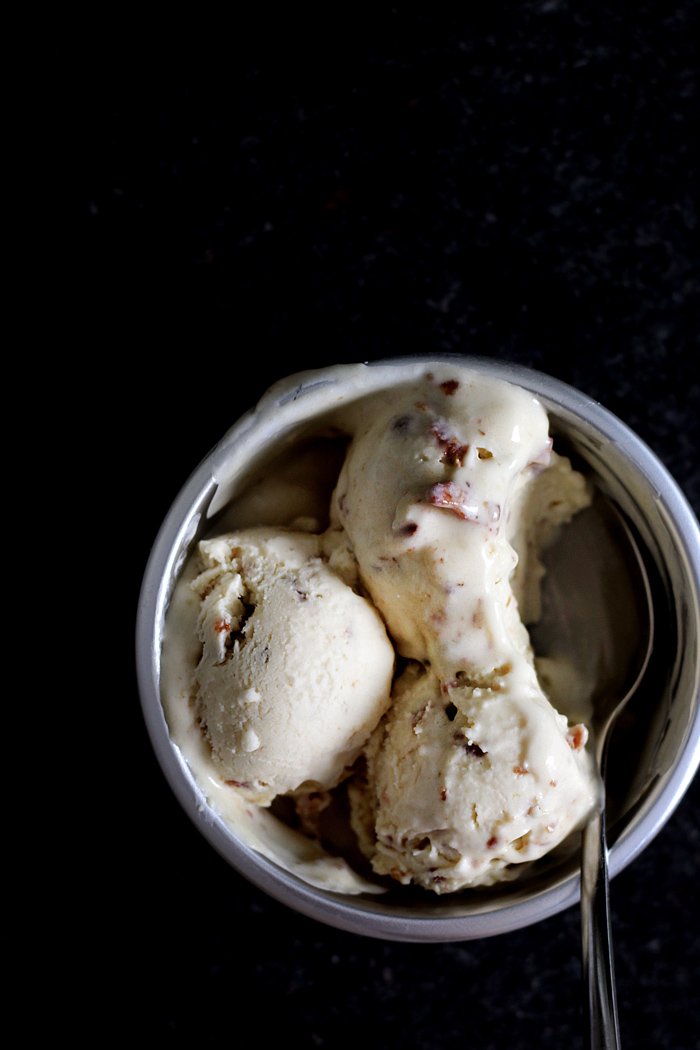 I didn’t incorporate poached pears as published in the infamous recipe by The Spotted Pig because a) Officially, it isn’t pear season.  b) Frankly, I didn’t feel like doing the work…  The grated nutmeg imitates the spiciness of poached fruits quite beautifully and subtly.  But if you happen to have poached pears on hand, I’m sure that adding 1/3 cup of pureed poached pear would bring the ice cream to another level.

I made this no-churn style just because I was lazy (post-climax, remember?).  NO-churn ice cream needs heavy cream (to be whipped) which adds to the already-over-the-top richness, given that there’s bacon fat in the recipe… (yes).  But I’m also including instructions for using ice cream-maker, which allows you to substitute heavy cream with whole milk or half and half, giving it a lighter taste.

To make this without ice cream-maker:  Cook the sliced bacons in a non-stick skillet over medium heat.  Once the bacons are browned and crispy with all the fat rendered out, drain through a sieve and reserve both the bacon bits and the bacon fat.  Chill the bacon fat inside the fridge until cooled, but still soft and pliable, approx 20~30 min.  Meanwhile, microwave minced dates and brandy together on high for 30 ~ 40 seconds, and let soak for 10 min.  Mix the bacon bits, brandy-dates, sweetened condensed milk, 1/3 cup of maple syrup and grated nutmeg in a bowl.  Break up the minced dates and make sure there are no large lumps.  Set aside.

In a food-processor (I initially tried stand-mixer, but later found that food-processor is much easier), combine cold heavy cream and 2 tbsp of chilled bacon fat.  Run the processor for 1 min or so, until the heavy cream is whipped and holds its shape (you’d rather under-whip it then over-whip it).  Add the bacon/dates/sweetened condensed milk/maple syrup mixture, and pulse until evenly combined.  Taste the mixture and add more maple syrup to adjust the sweetness if needed.

Transfer the mixture into a large ice cream-container.  Freeze until hard, at least 6 hours to overnight.

To make this with ice cream-maker:  Cook the sliced bacons in a non-stick skillet over medium heat.  Once the bacons are browned and crispy with all the fat rendered out, drain through a sieve and reserve both the bacon bits and the bacon fat.  Chill the bacon fat inside the fridge until cooled, but still in liquid-form, approx 10 min.  Meanwhile, microwave minced dates and brandy together on high for 30 ~ 40 seconds, and let soak for 10 min.  Mix the bacon bits, brandy-dates, sweetened condensed milk, 1/3 cup of maple syrup and grated nutmeg in a bowl.  Break up the minced dates and make sure there are no large lumps.

Add the cold whole milk, or half and half, or heavy cream (based on your preference for richness), and mix evenly.  Taste the mixture and add more maple syrup to adjust the sweetness if needed.  Churn the mixture in an ice cream-maker according to the manufacture’s instruction, then right at the beginning, slowly pour 2 tbsp of cooled bacon fat (but still in liquid-form) into the mixture through the feed-opening (if your ice cream-maker doesn’t have an opening for feeding, you can add the fat in 3 additions while churning).  Once churned, freeze the ice cream until hardened, at least 6 hours. 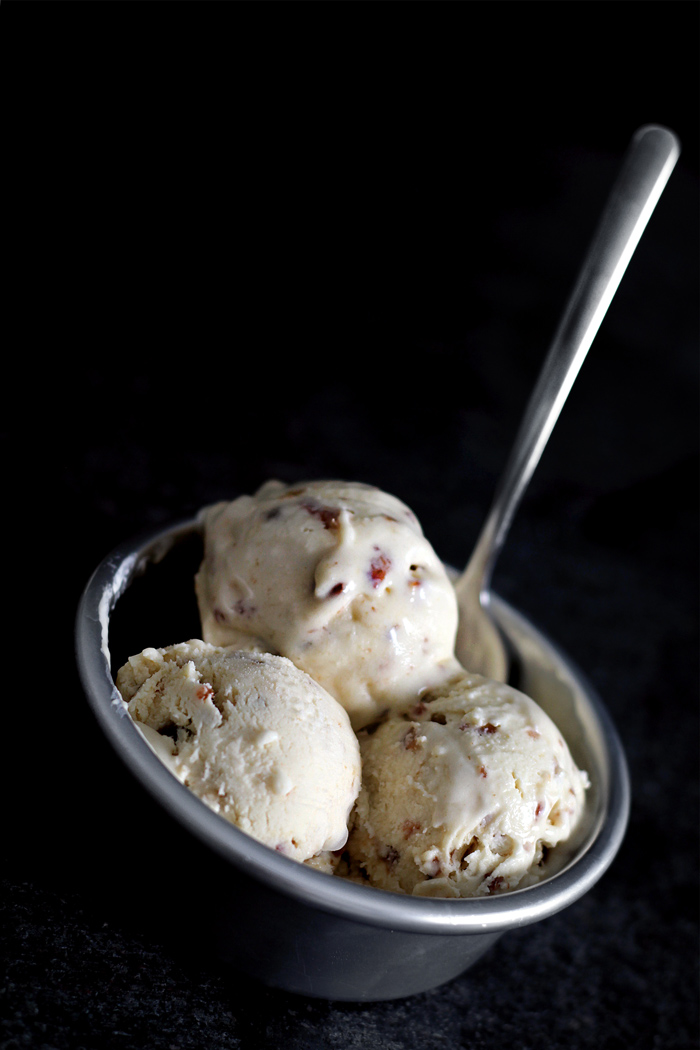