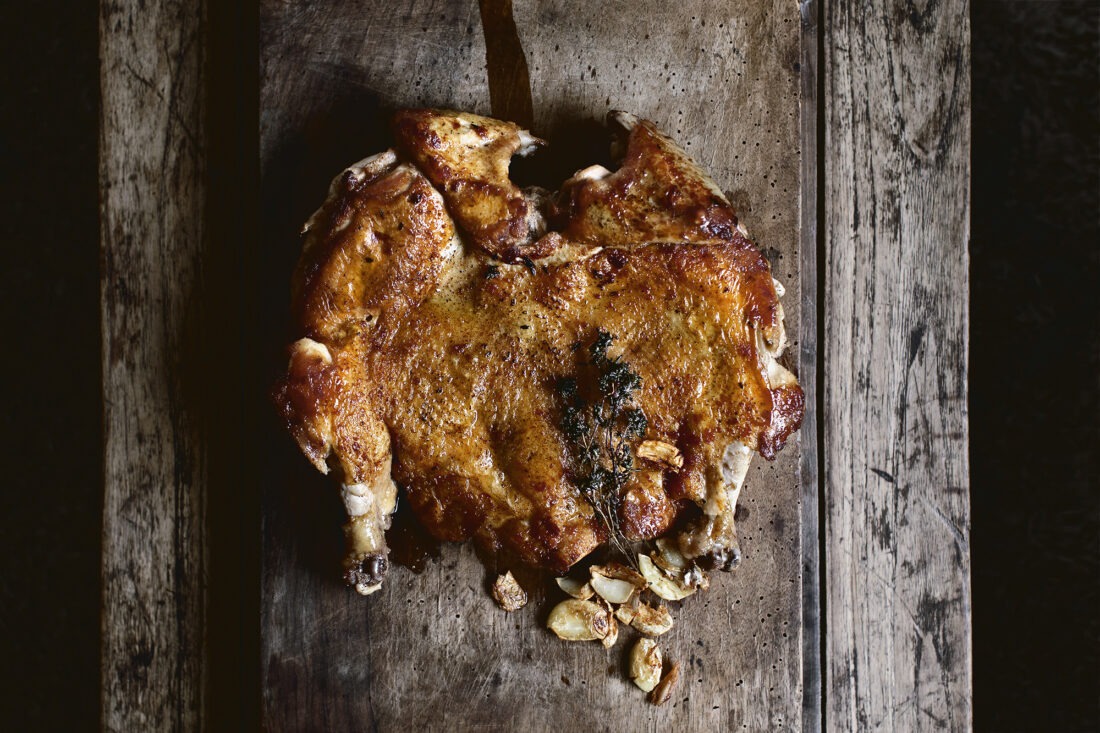 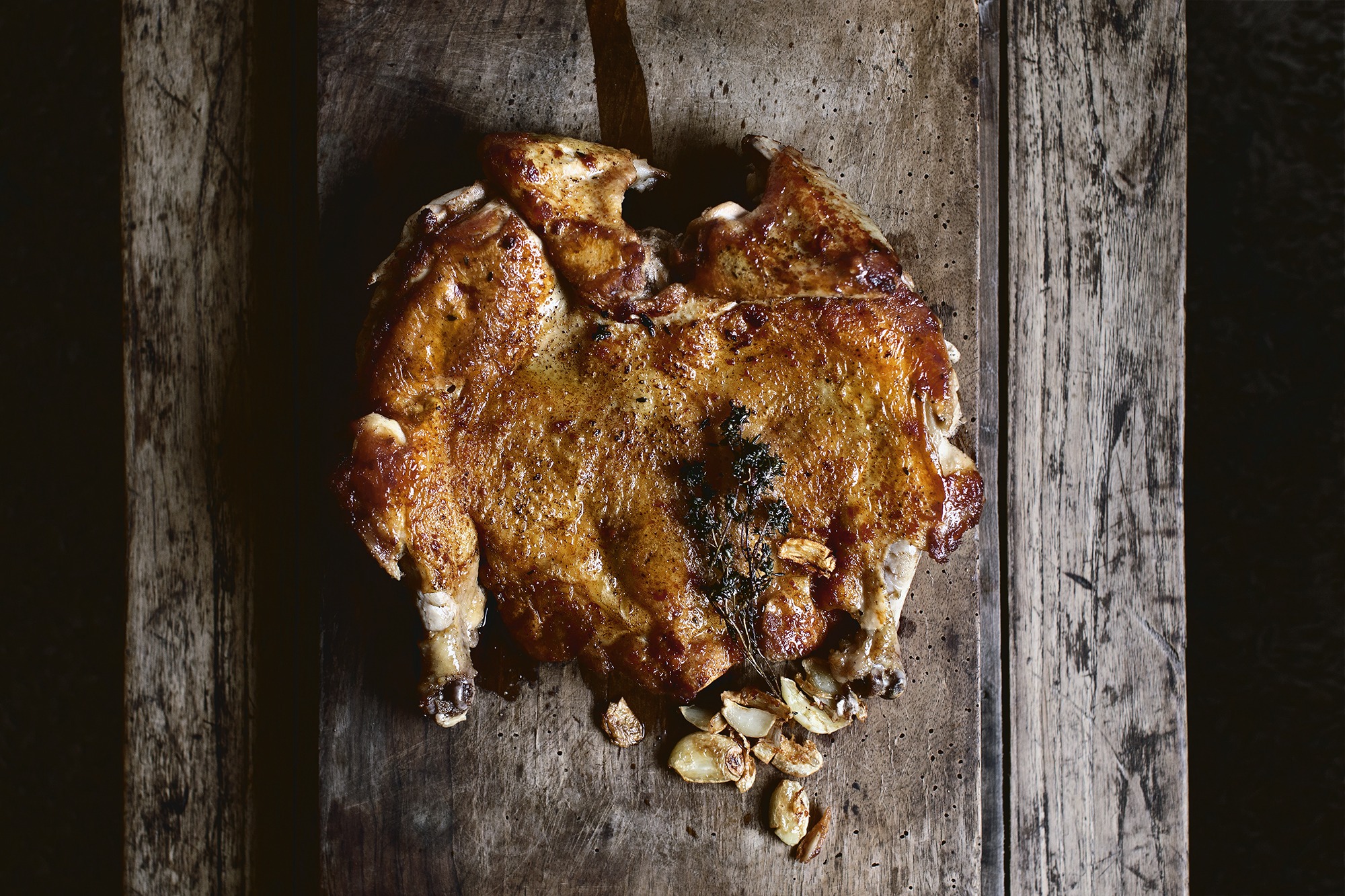 ”  In this climate where any certainty is elusive at best, I can promise you this…  “

I’ve always been an avid campaigner in the flattening of a bird, a process of turning this hopelessly 3-dimensional animal that insists on uneven heat distribution, into a 2-dimensional disk that crisp up indiscriminately across the plane.  Without the technicality of deboning the entire chicken and armed with only a single kitchen shears and a flat skillet, I’m going to show you how to easily de-joint and de-scaffold a bird so that it can achieve an unequivocally crispy and blistered skin-cap on one side, and slow-cooked therefore succulent and unbelievably juicy meat (even the breasts!) on the other.  In this climate where any certainty is elusive at best, I can at the very least, promise you that you’ll never want to roast another bird after this. 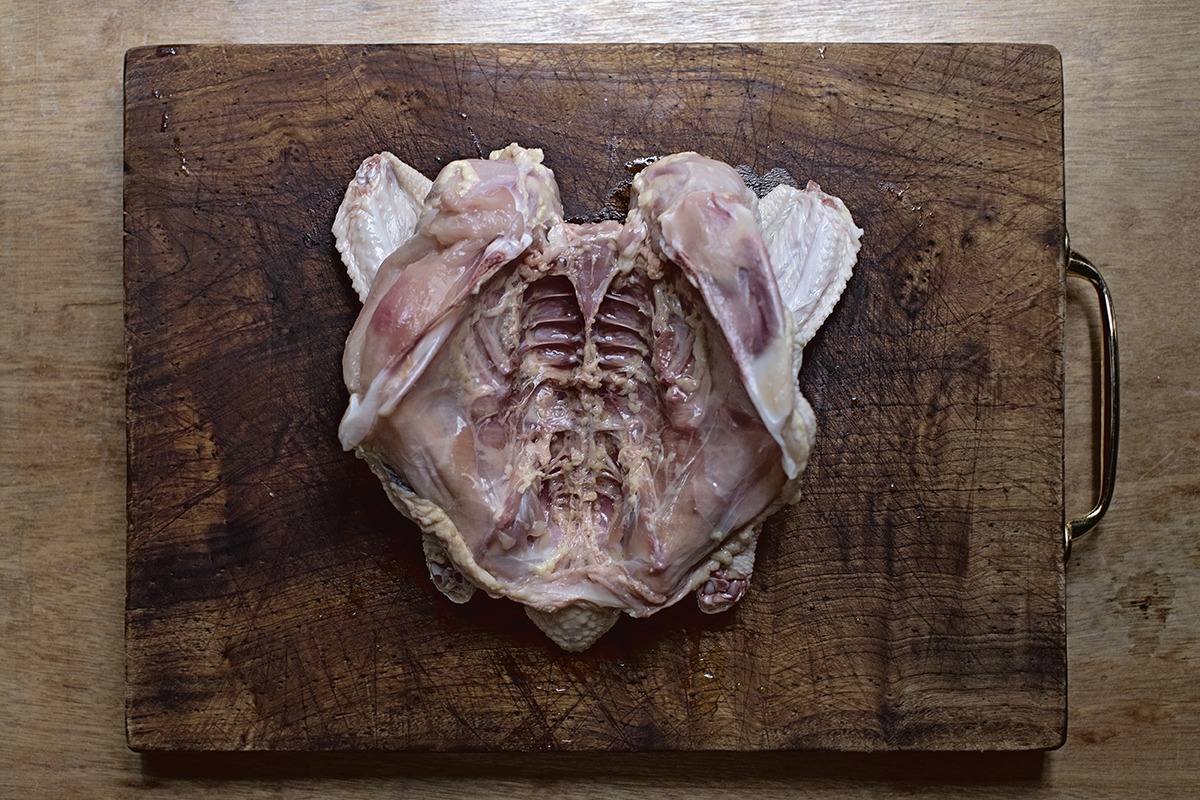 STEP 1:  You’ll be able to finish this entire process with a kitchen shears.  Remove the wing tips and place the bird with the backbone/spine facing the counter.  Then cut through the breast bone to open the bird up. 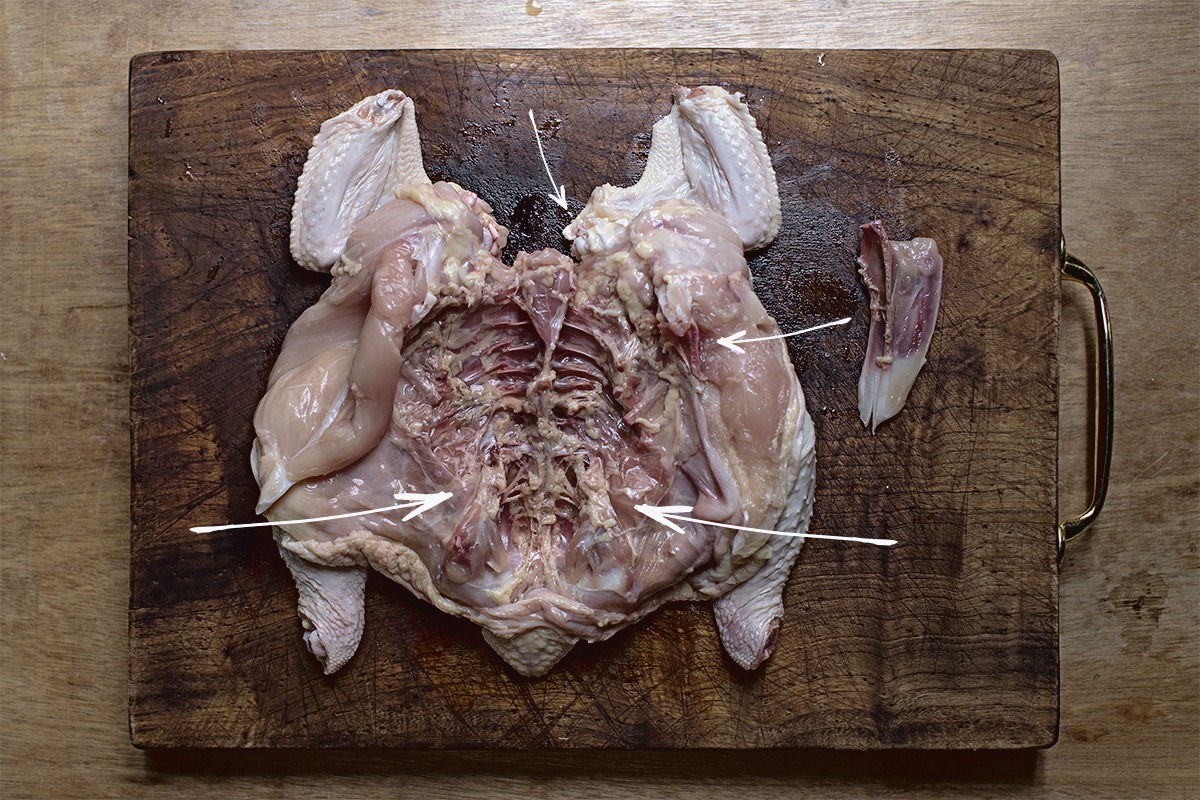 STEP 2:  Flip the bird over with the skin-side up, then bend and snap/dislocate the joints that connects the thighs to the backbone/spine by bending the thighs 90 degrees upward.  Flip the bird back now with the skin-side down.  With a kitchen shear, completely cut through the joints that connects the wings to the breast (but have them still attached), then remove the triangular breast-bone as seen in this photo. 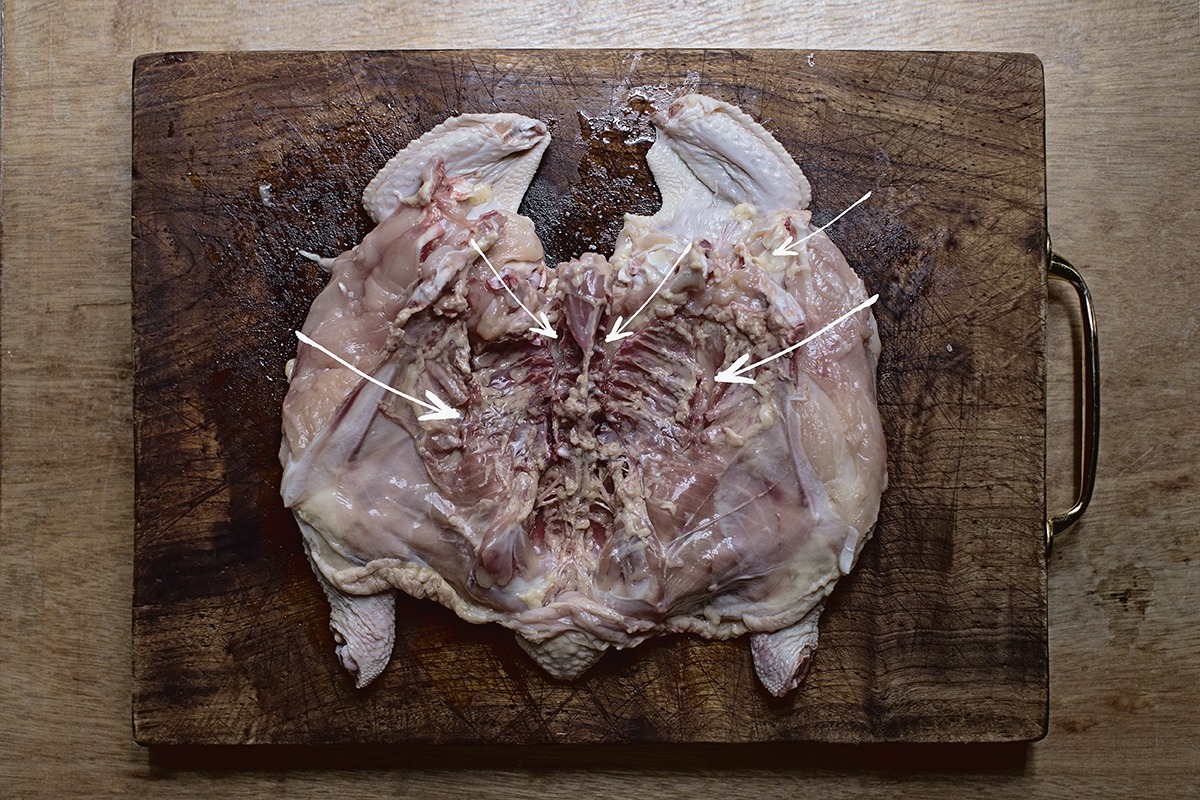 STEP 3:  To further flatten the bird, cut along the rib cage to separate it from the backbone/spine, then cut through it again somewhere around the mid-point to flatten the natural curvature of the rib cage.  Also cut through the wishbones that connects the shoulder and breast to the rib cage.  Don’t worry, there’s no strict technicality here.  The rule of thumb is disconnect every single joints that holds the bird in shape so that it can be completely opened up and flattened. 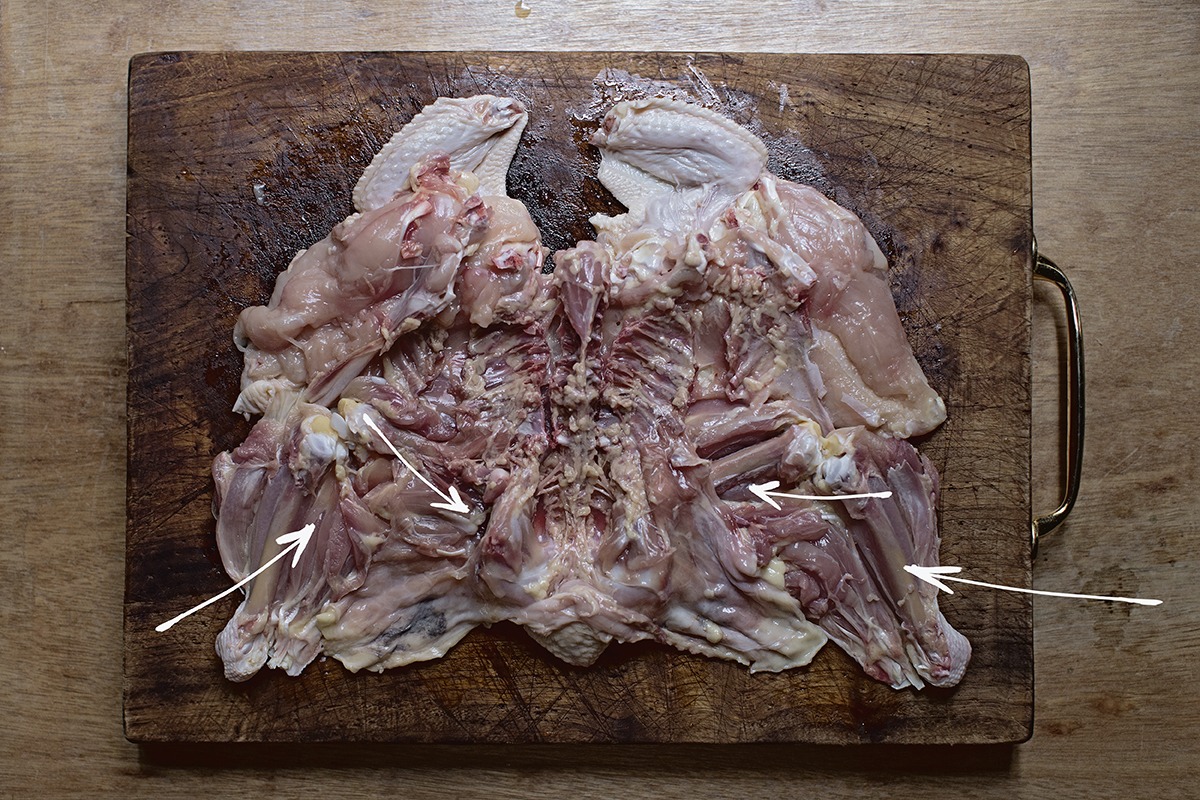 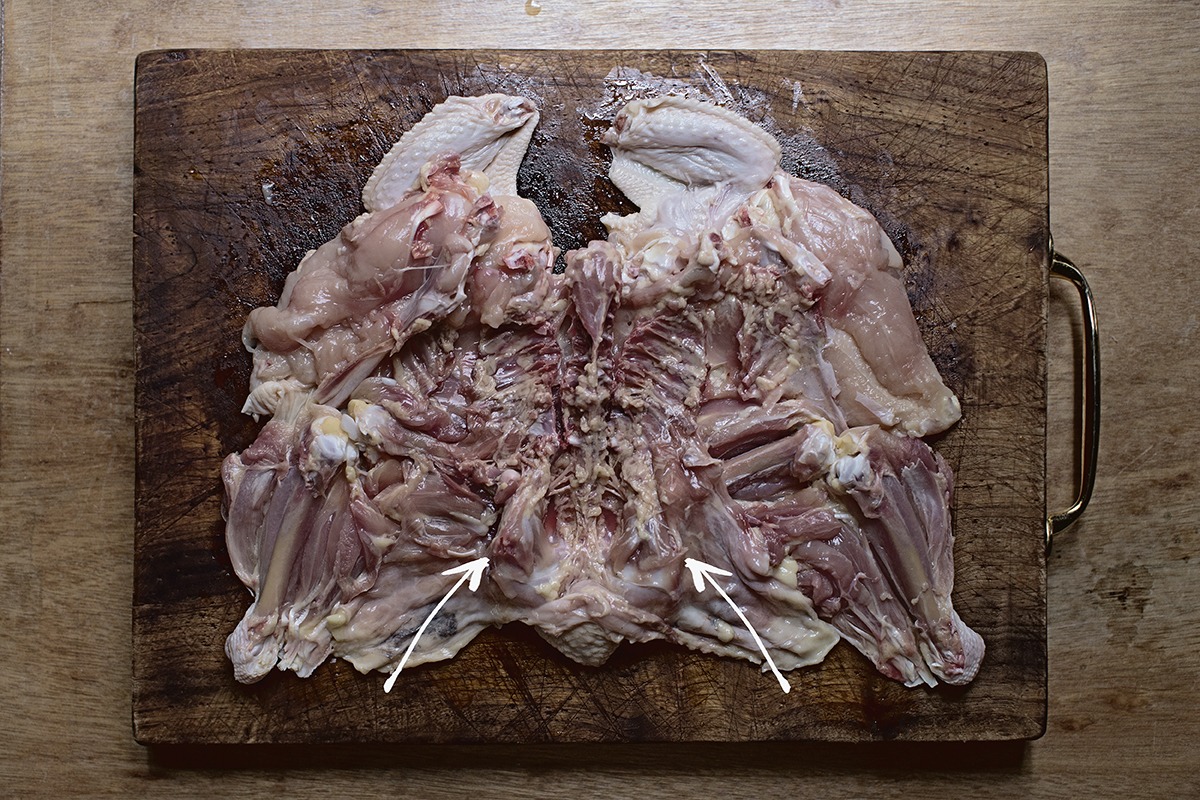 STEP 5:  Finally, cut alongside the meat that is attached to the pelvic bones to further open and flatten the hip area.  Cut and remove the two pointy tips of the pelvic bones.  At this point, the entire surface of the skins should be able to lay completely flat without curves. 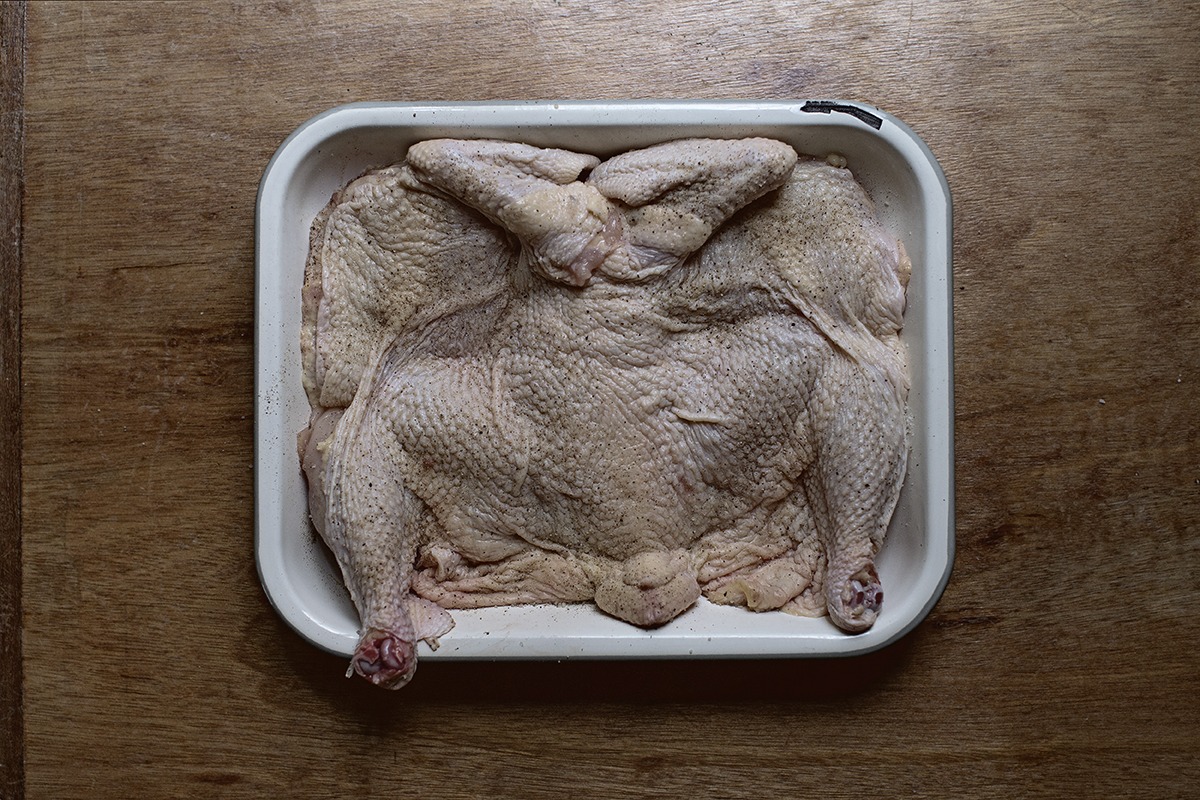 STEP 6:  Lay the bird meat-side up first and evenly sprinkle 3/4 of the dry seasoning on top.  Flip it over with the skin-side up, and sprinkle the rest of the seasoning evenly over the skins.  UNCOVERED, let the bird marinate in the fridge for at least two hours, or 6~8 hours. 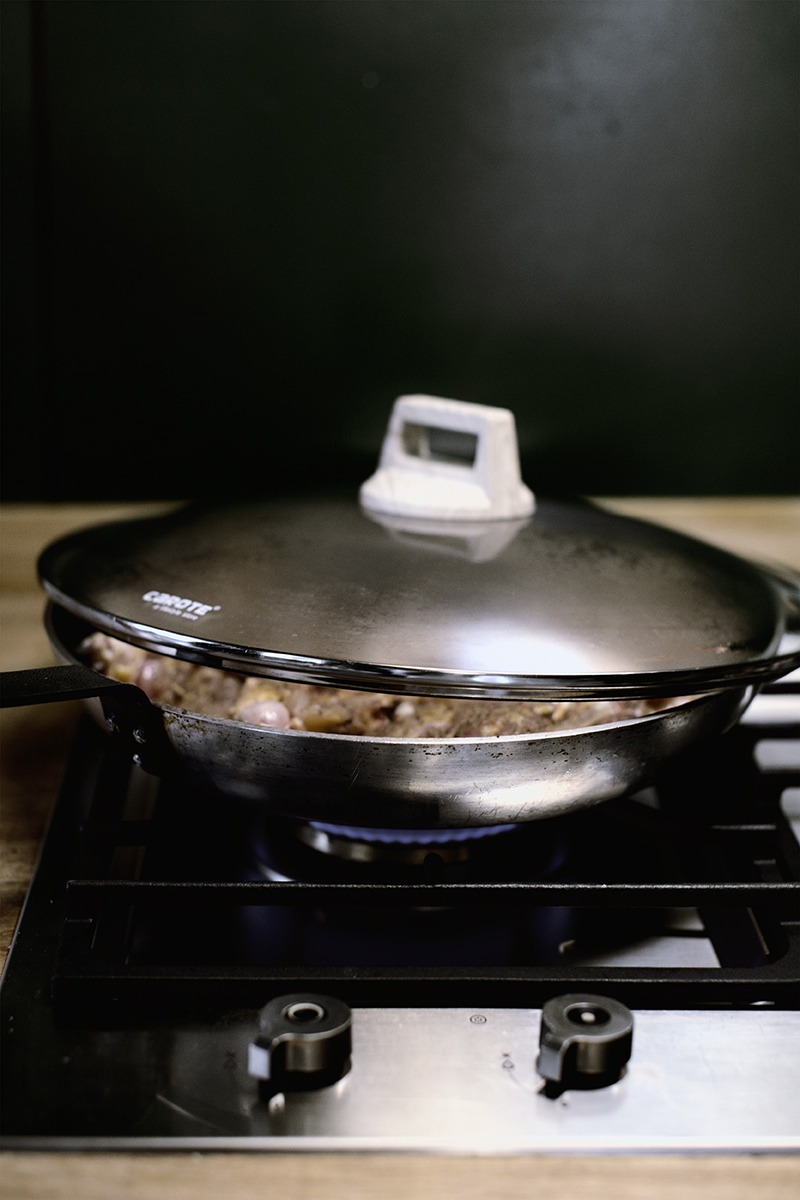 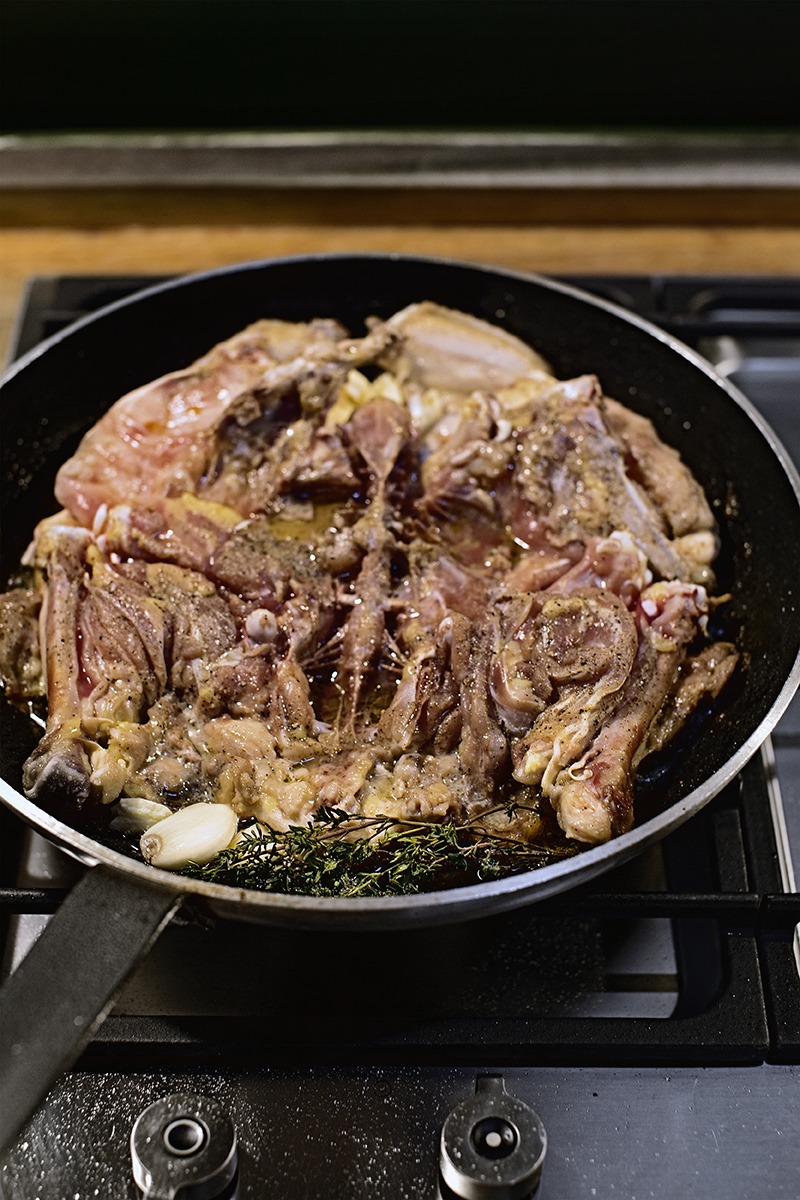 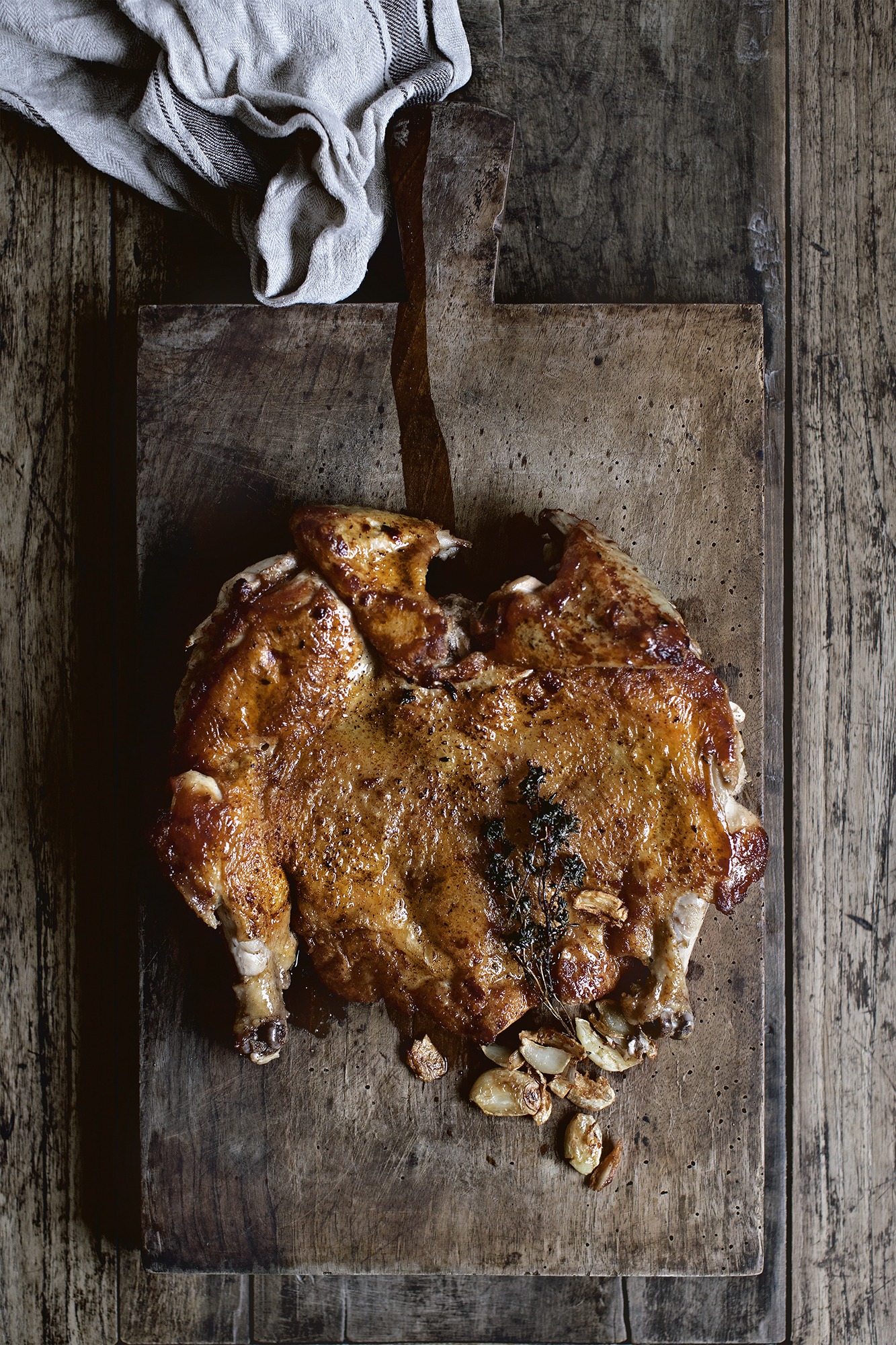 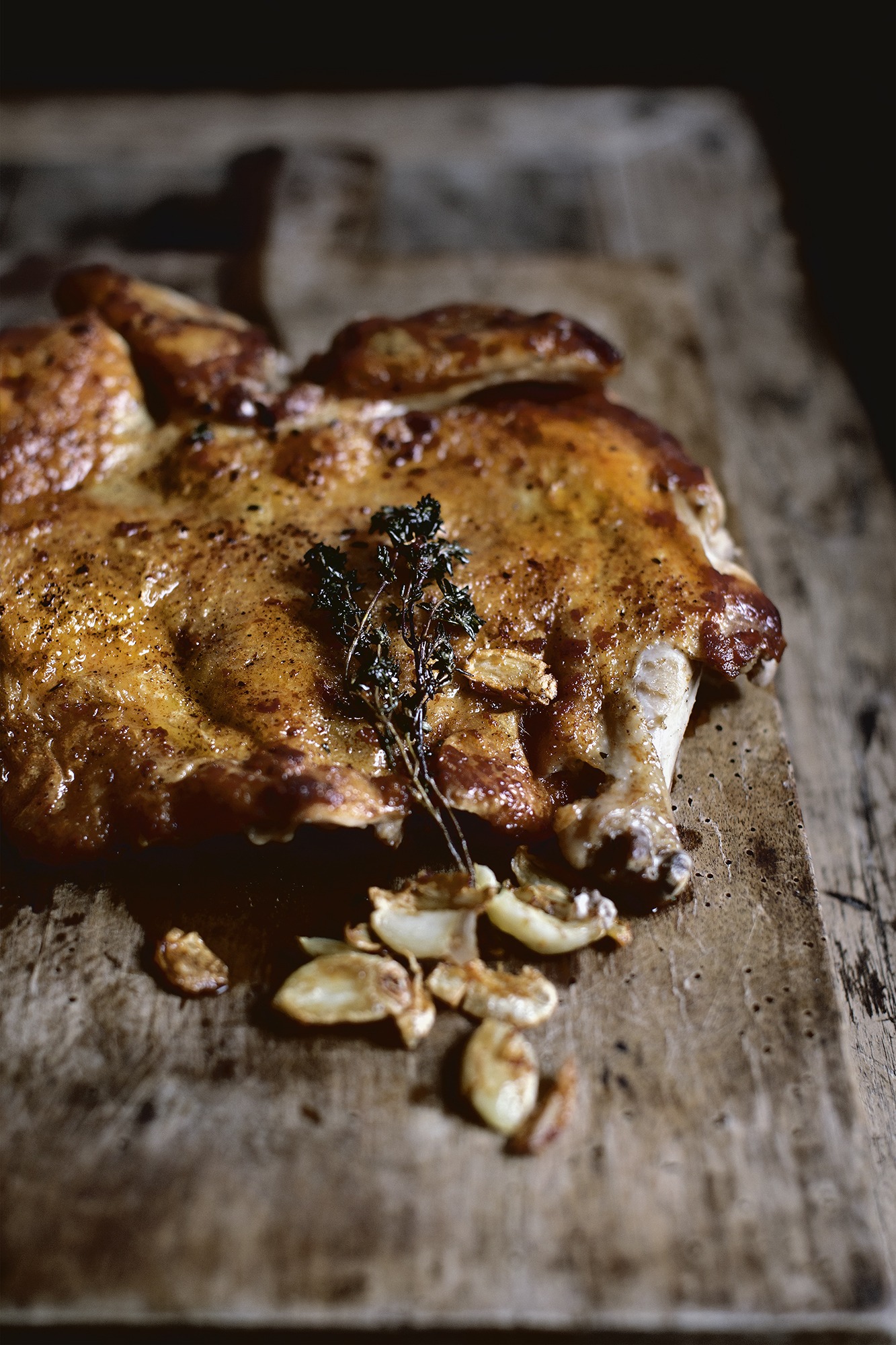 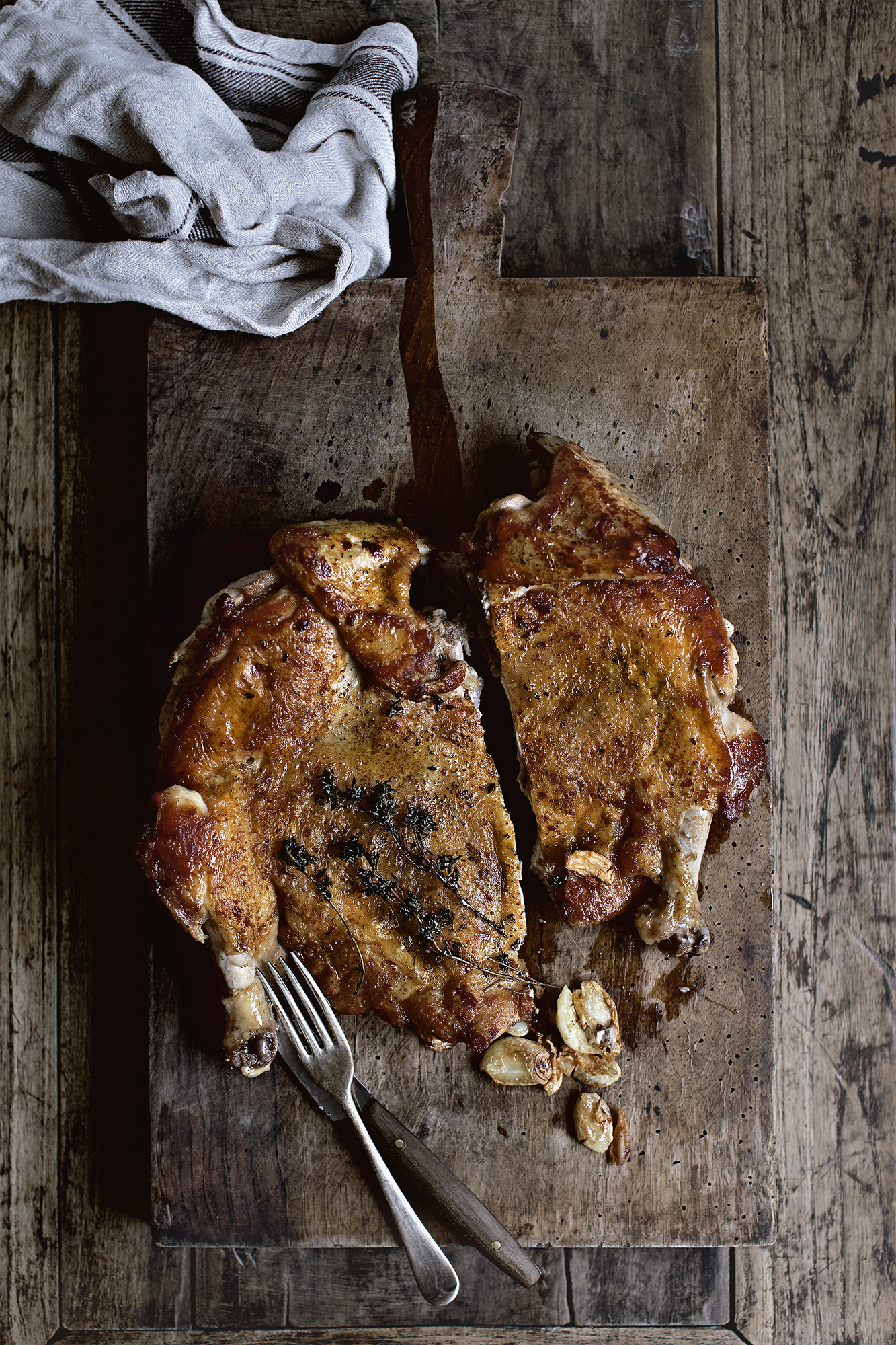 * My chicken is relatively small, about 3 lbs. You can certainly use larger chicken but adjust the amount of seasoning according. * Avoid any garlic or onion powder in the seasoning that will burn easily and become sticky. Keep the seasonings simple with salt and pepper, and introduce other aromatics later on in the cooking process.