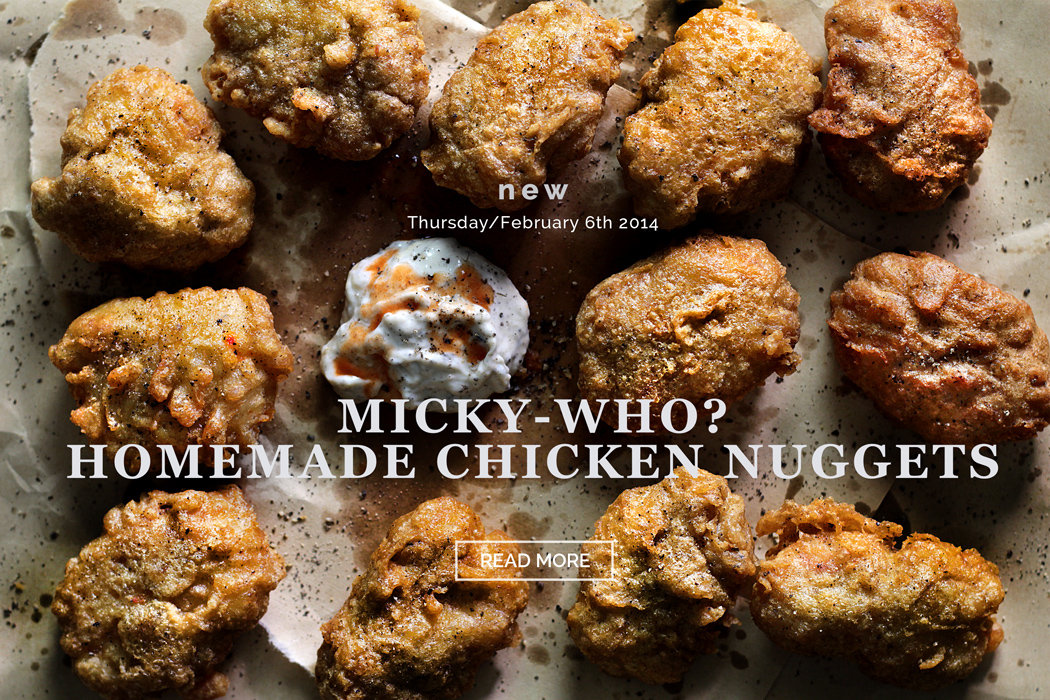 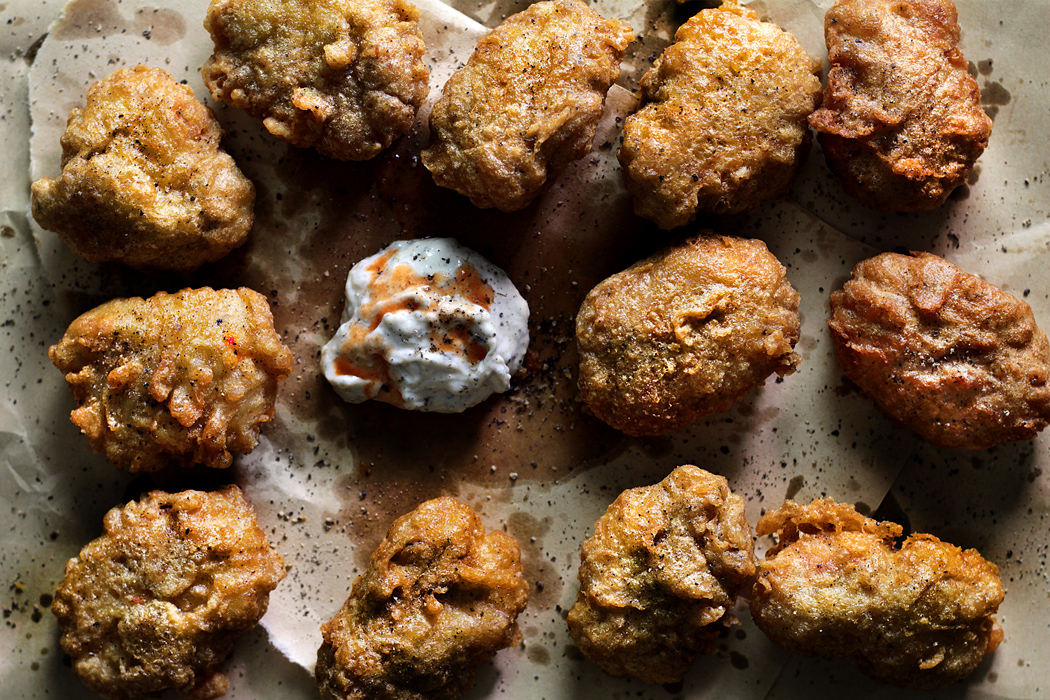 “I
SUPERNOVA-SIZED MYSELF
FOR YOU.  IF THIS IS NOT LOVE…”

Oh you thought I was kidding about the what-my-ailing-dog-wouldn’t-eat-but-you-might series?

Uhem, no sir, no ma’am… I was dead serious.  You see, the following story is either gonna provide clarity or forever put you off from reading another word in this post, but I’m gonna say it anyways.  In the past weeks of my bumpy journey on coming up with nourishments that my heartbroken dog-son might be willing to sniff or perhaps take a bite, I found myself embarrassingly wanting… salivating really… over these supposedly “dog foods” that I kept for him in a tupperware…  And for awhile it took some considerable amount of trembling self-respect not to, until finally I decided silly was just silly.  That I shall eat them myself.

No, again, I’m not kidding. 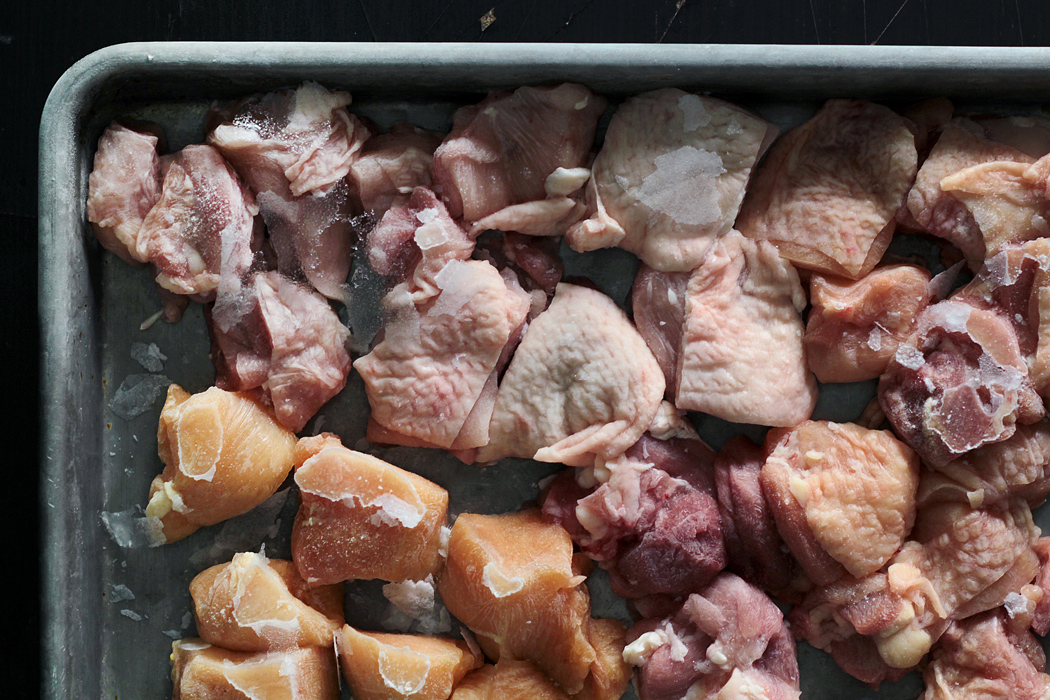 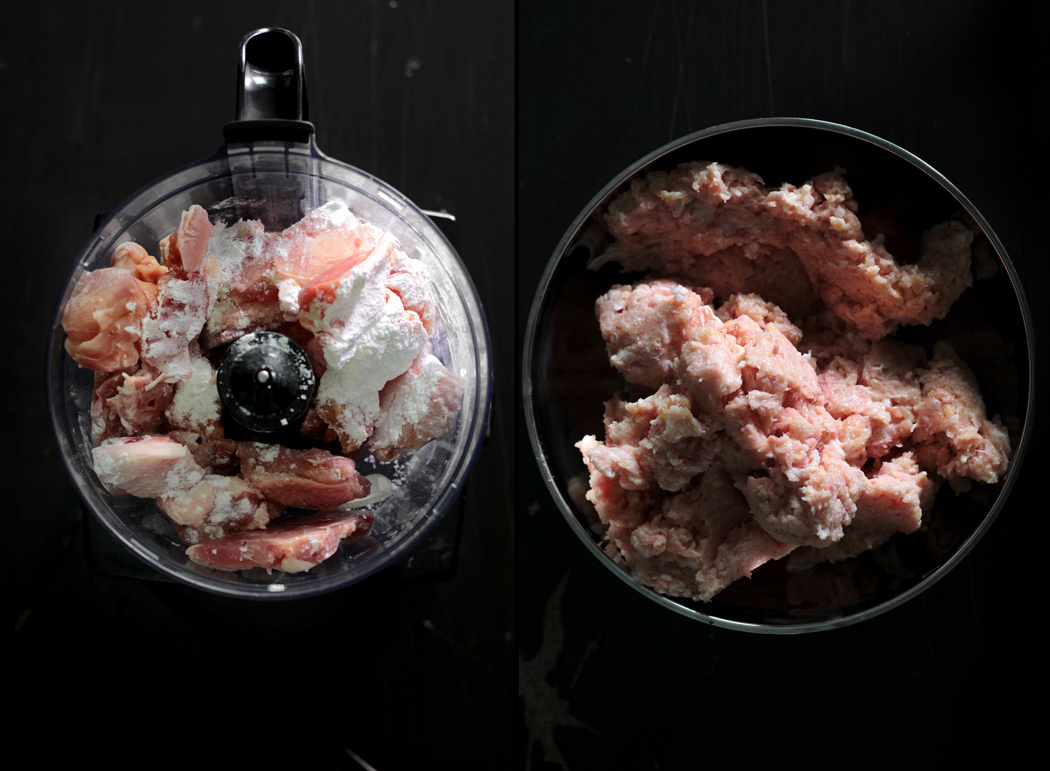 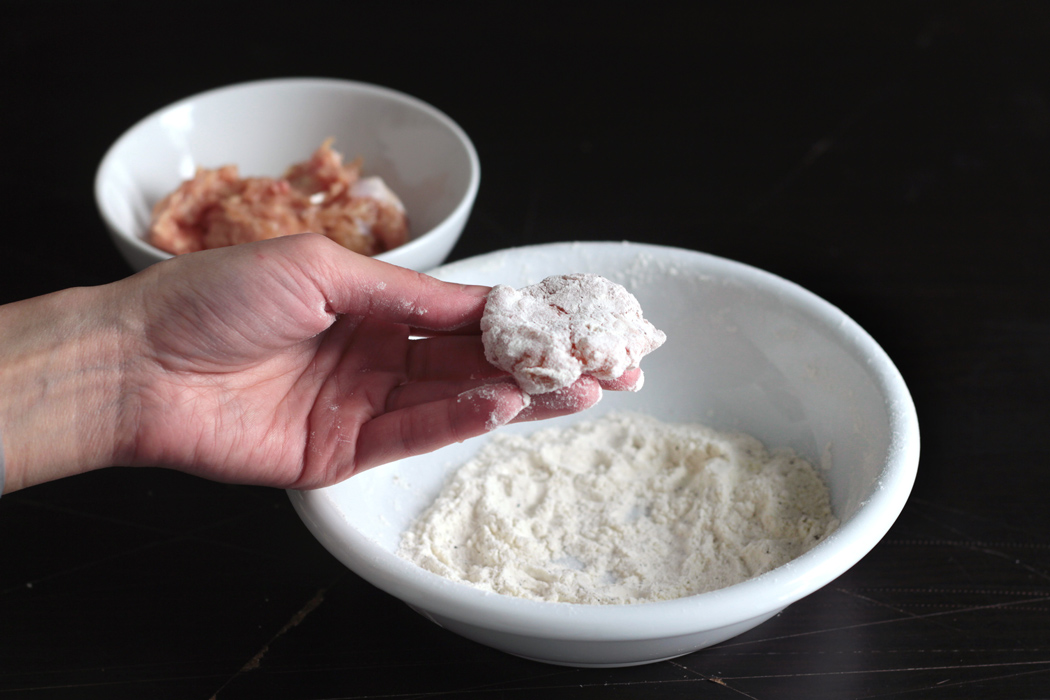 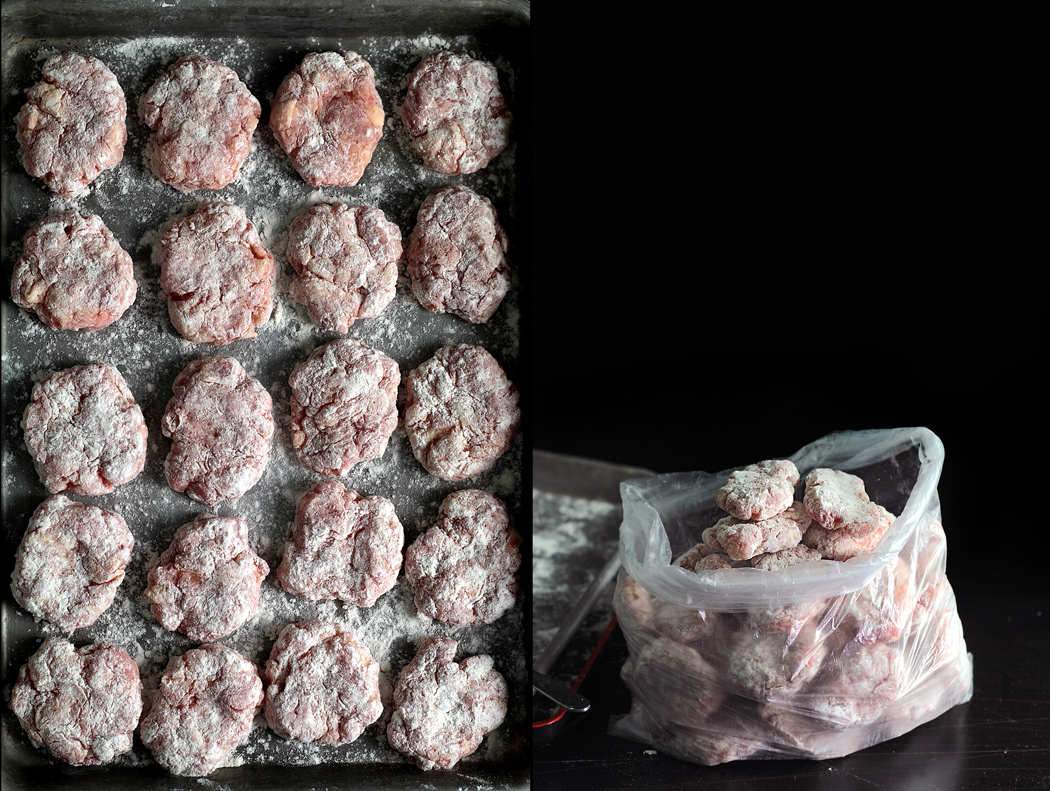 Let’s deactivate the obvious alarm at this point, that yes, we’re looking at some strikingly beautiful but nonetheless canine-inappropriate nuggets here, so am I suggesting that I awfully fed my ill-hearted Dumpling (that’s his name), against all common sense and condemnations… chicken nuggets?  Yes.  Yes, I have.  BUT!  If I may, even if only for my own peace-making, that it was an extraordinary measure taken during an emergency-time in his otherwise healthily dieted life.  Three weeks ago which was about five days into his stubborn anorexia-crisis, between him dying healthily or living dangerously, it became desperately obvious that we had to pull out, the big guns.

So yes, we gave him McDonald’s.

McNuggets to be exact, outer batters removed, and it was the first thing in five days that he took more than a lick from.  I think McNuggets pulled the Dumpling out of the boiling water… Or only as an inspiration at least, because the next day I started baking a healthier, salt-less version of chicken nuggets for him.  I minced skin-on chicken thighs and breasts, and baked them in mini muffin-cups until slightly browned.

McDumpling flipped.  OK so did I. 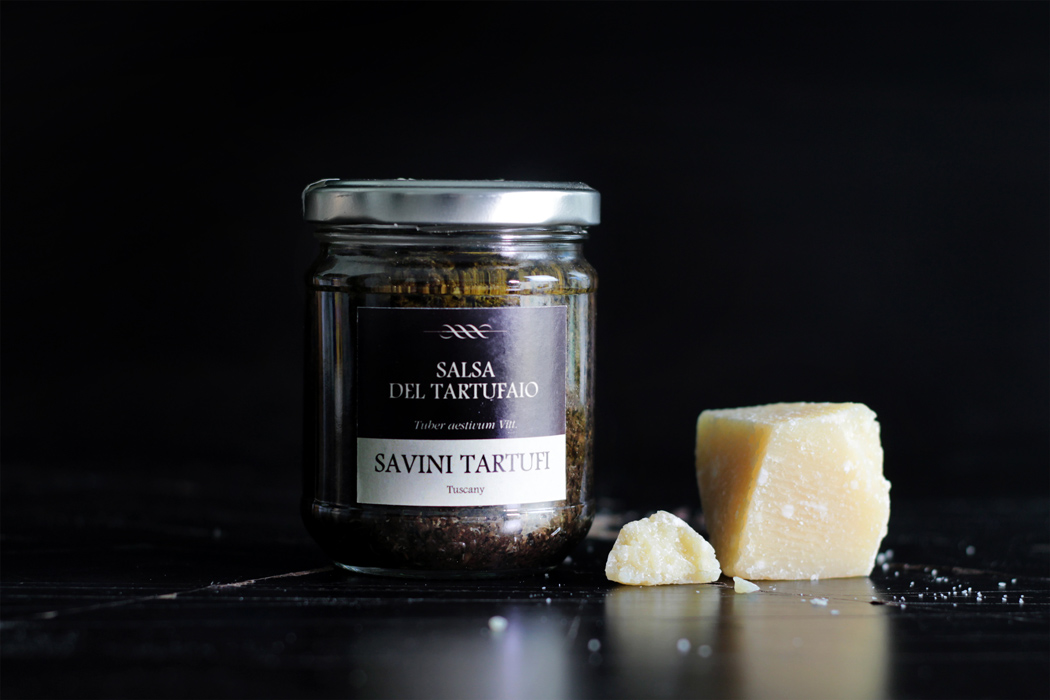 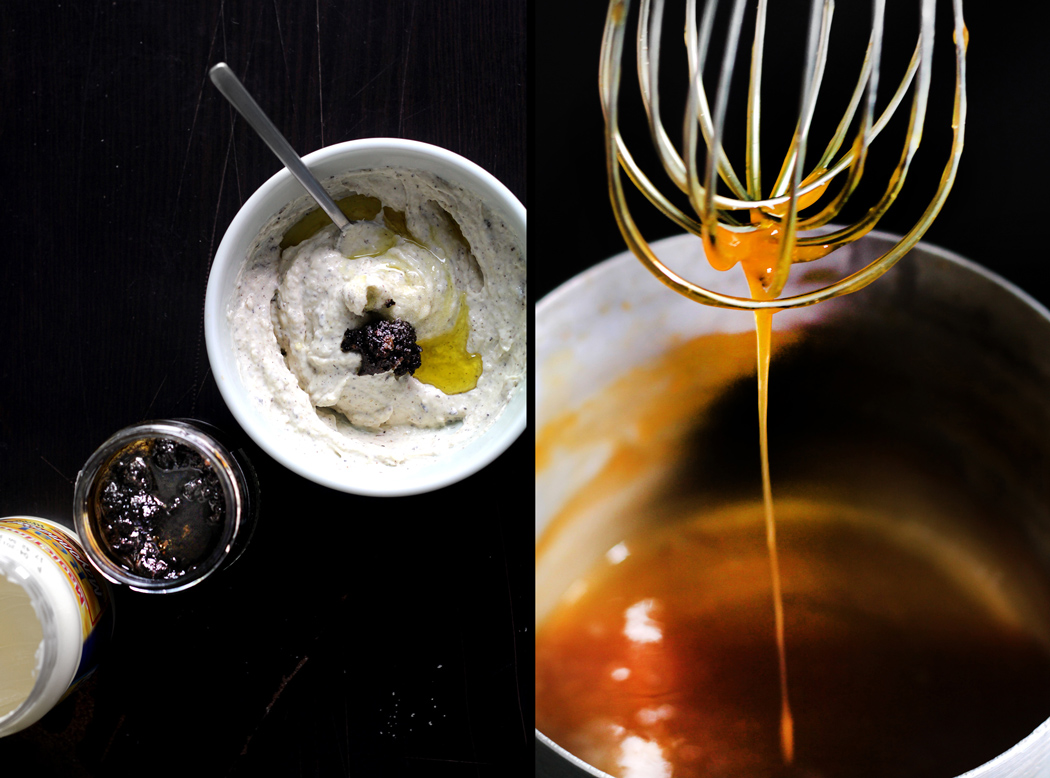 Yes, yes I took a bite of “his food” because you know… well… parents should taste the foods they make for their children no?!  And also, yeah just maybe, because those nuggets looked so juicy and moist, and smelled so enticing that they talked to me a little bit but you know, it was mainly the first reason.  But what I didn’t expect was the second I took my first bite of the homemade nuggets even without salt… I was like, Micky-the-fuck-Who?!

Holy Moly, these nuggets were goooood!!!  I mean the skin that were originally kept as some extra “energy boost” did accidental miracle, not only providing flavours but turning these into the juiciest and most chicken fat-laden nuggets I’ve ever tasted!  I didn’t call them… they called meh!  And so it was, at last… the rising of the curtain… the dawn of my doom… the train that carries a full-blown, borderline-evil and plain-sick post on homemade chicken nuggets has officially left the station.

It was too late to stop. 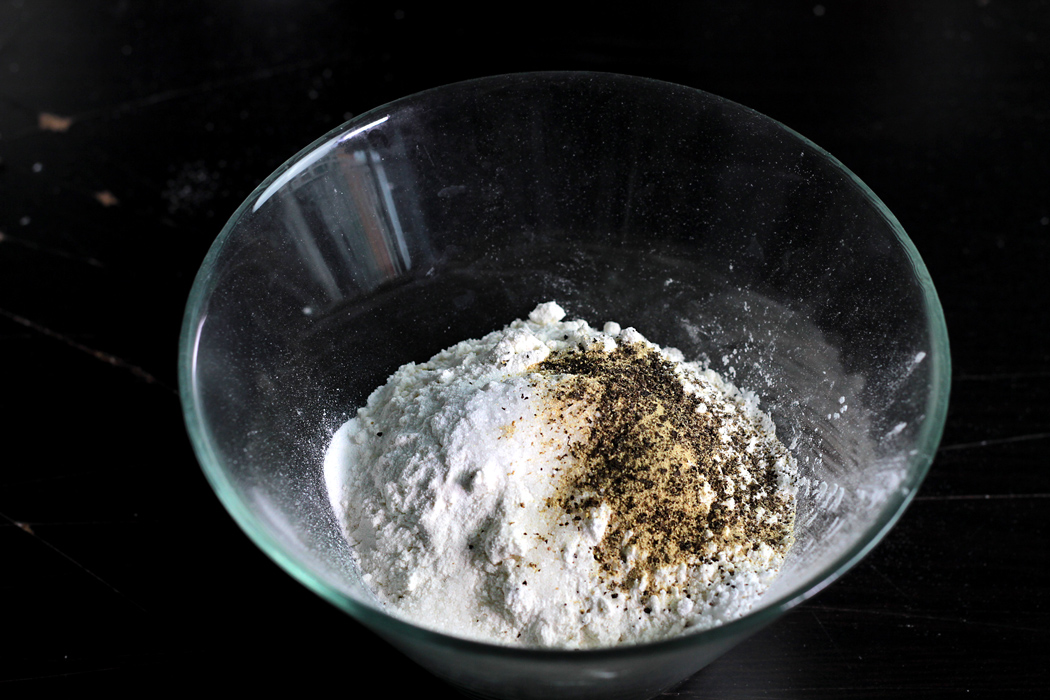 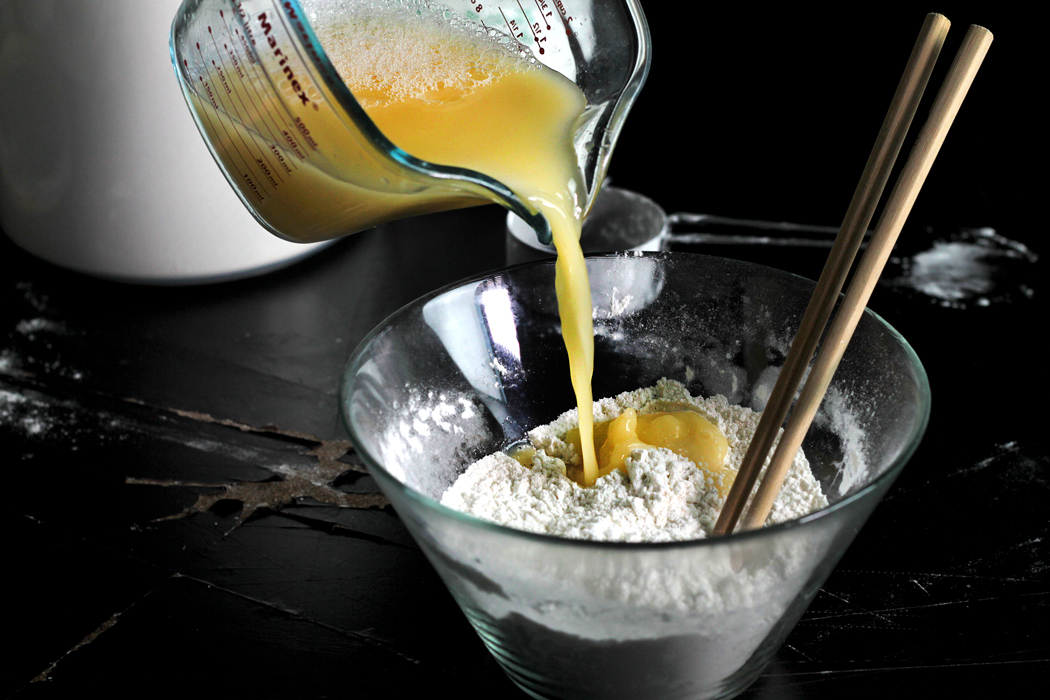 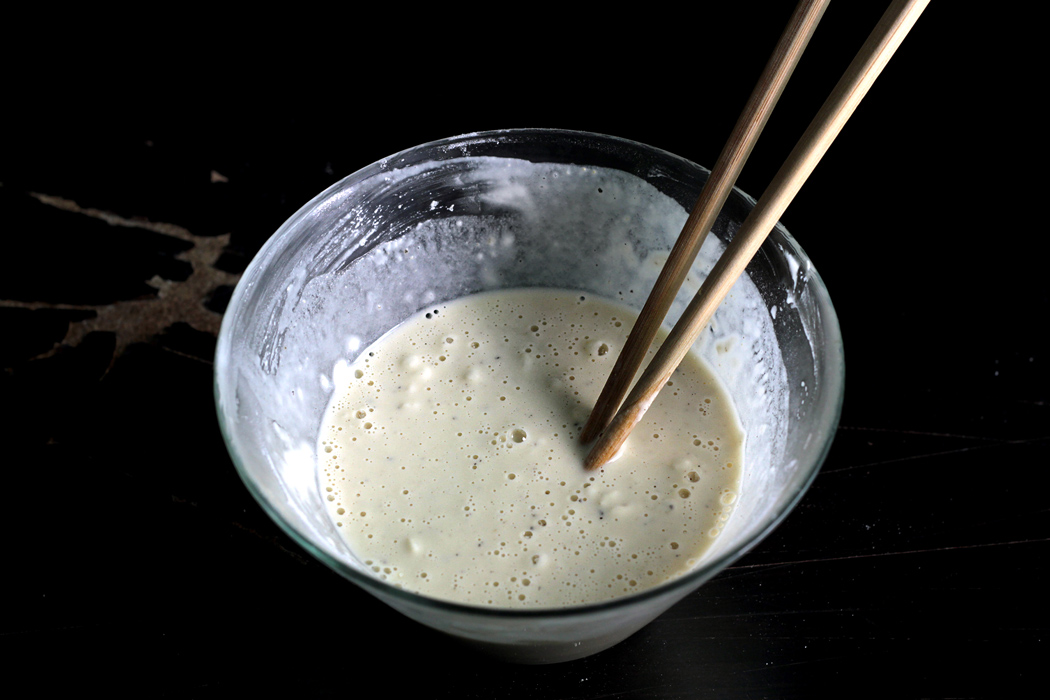 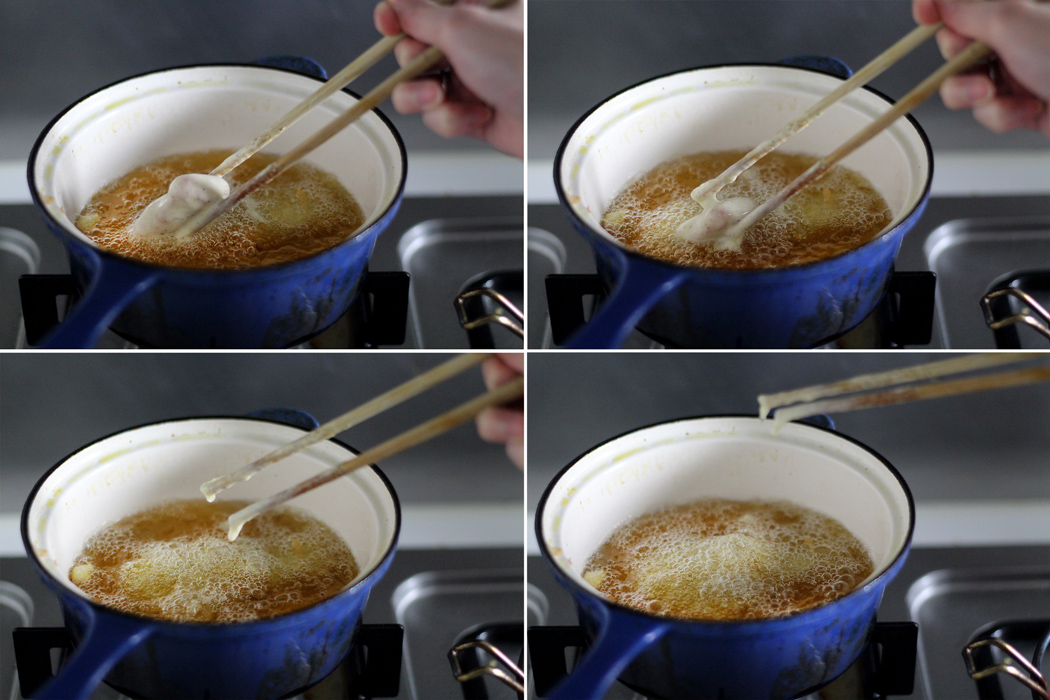 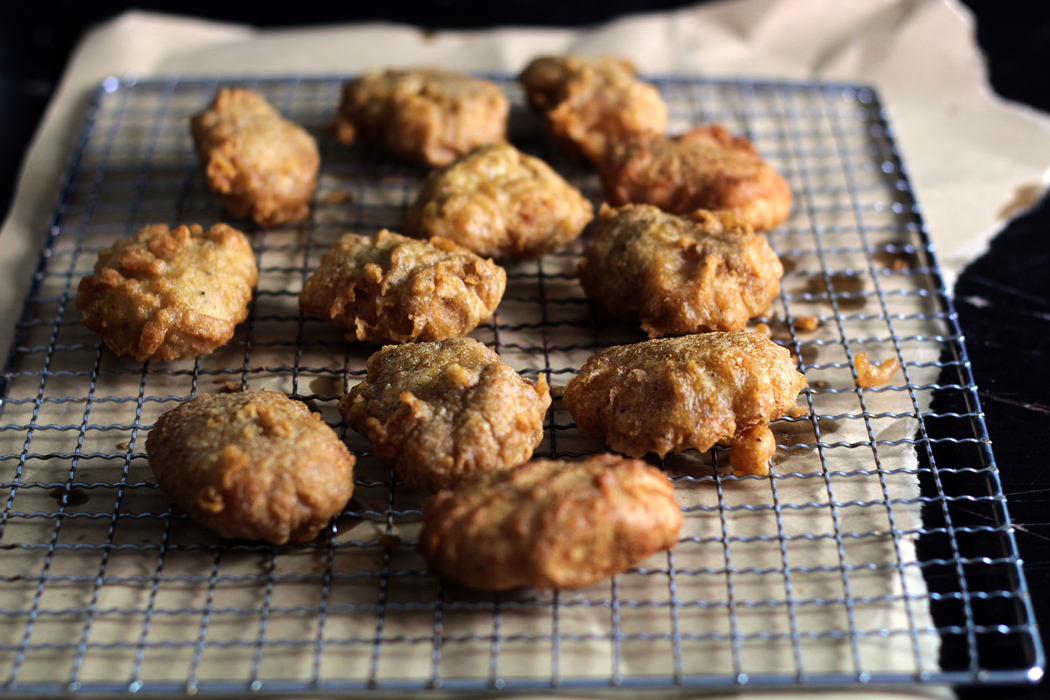 After a couple weeks of testing and tweaking out a perfect, legit homemade nuggets recipe for you, there are a few self-discoveries made along the way:

Now, do you really need reasons not to just order from McDonald’s?  No, no it’s not because McDonald adds creepy industrial stuff to their foods which I have zero problem with.  But because, on top of perhaps-yours peace of mind, MyNuggets are better. 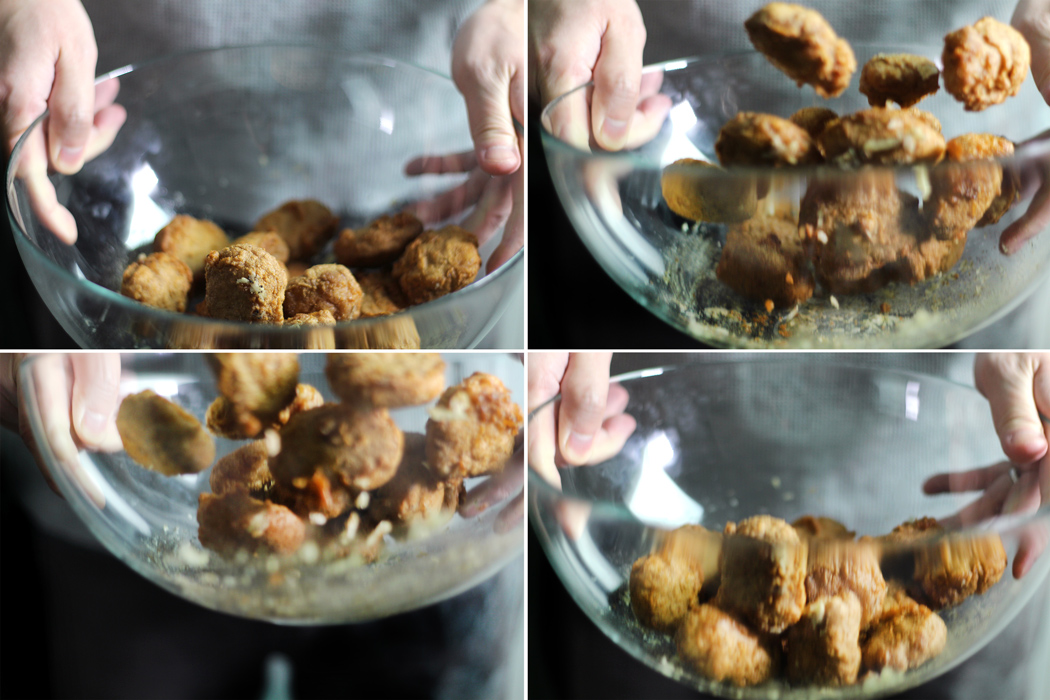 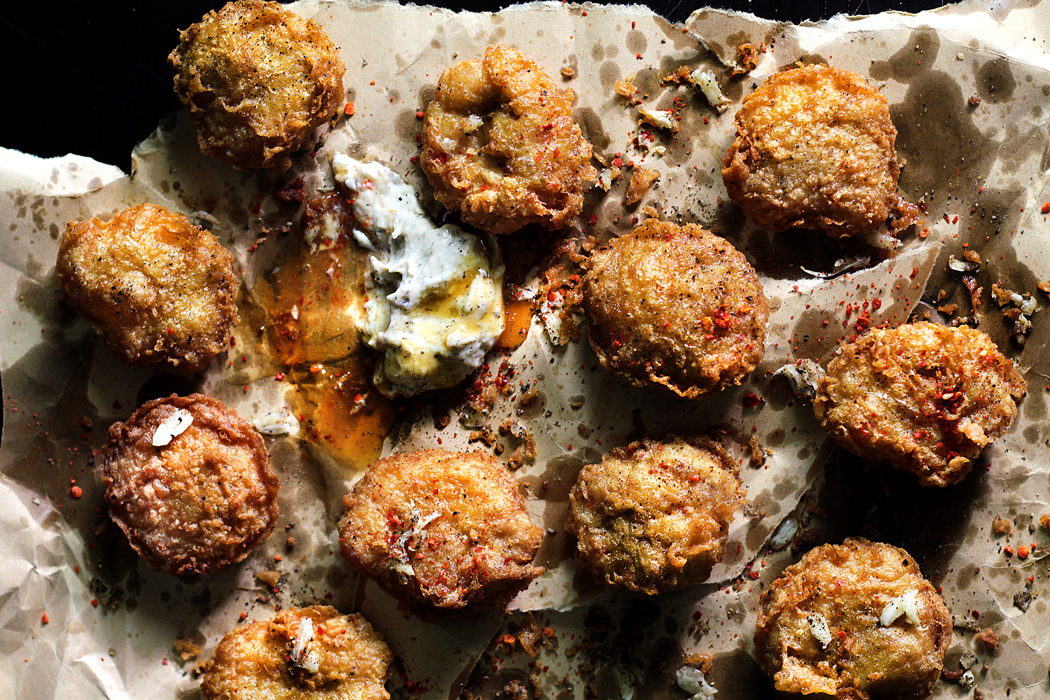 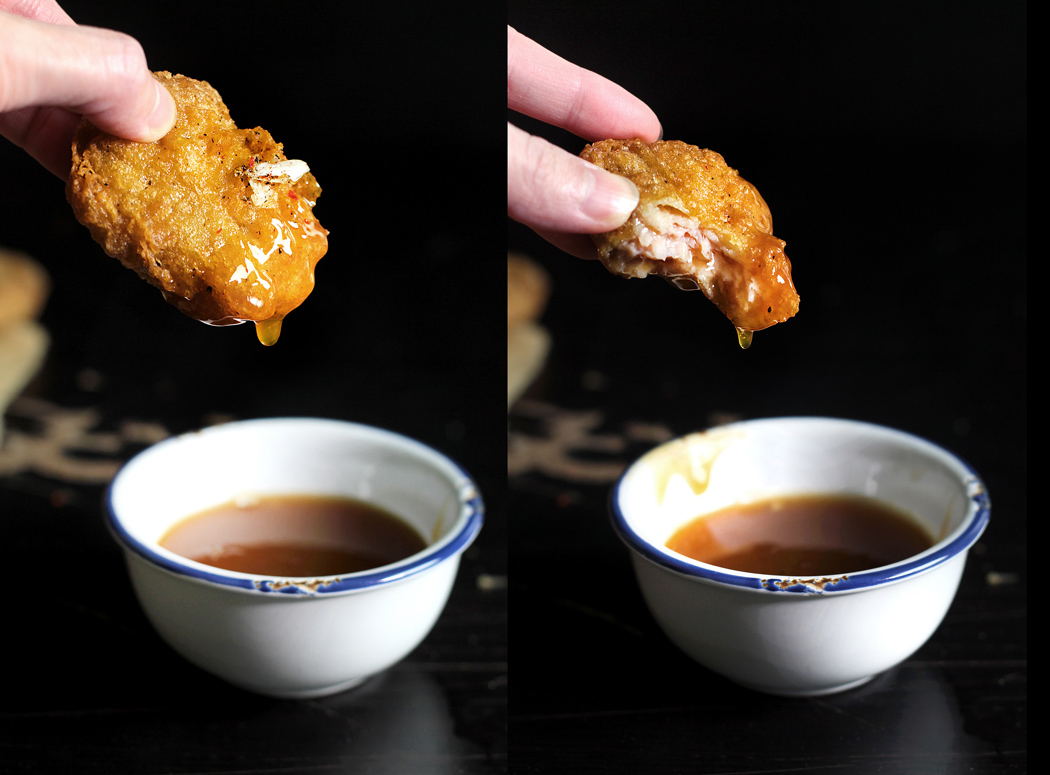 The pre-battered nuggets keep perfectly in the freezer for whenever hunger strikes, and the batter whips up in no time.  Could be, or not be… a good thing.

The freezing before processing the chicken is super important.  The nuggets is extra juicy and flavourful because of the minced skin, but the skin will never be “minced” properly in the food-processor without proper freezing.  By proper freezing, I mean borderline frozen, not rock-hard frozen.  If you are flash-freezing the chicken right before the processing, cut them into chunks (so they freeze faster) and flash-freeze for 2 hours until the skins are hard.  If you are using already frozen chicken (which is rock-hard), leave them at room-temperature for 1:30 ~ 2 hrs to thaw.  You should be able to, with much applied force, cut through them with a knife.  It’s always better to over-freeze than under-freeze.

Jason is forcing me to stress this part which I believe nobody wants to hear, but he does have a point.  If you don’t mind a few minutes of extra work, double/re-frying the nuggets at high-heat for about 30 seconds does make a difference (why do you think McD does it?).  Yeah, just like French fries.  It draws even more moistures away from the batter, making them crispier, and stay crispier for longer.  Just for the record, I’m perfectly happy with the fried-once-only nuggets that are already golden browned and crispy.  But if you need these nuggets to stay alive for hours, re-frying is a good option.

Do not keep the nuggets in the oven to stay warm.  It will kill them sogging-ly.  Ain’t nothing wrong with cold but crispy nuggets.

The general rule of thumb for the batter is, the ratio between the wet ingredient (egg yolk + iced water) and dry ingredients (flour + tapioca starch) is 1:1, by volume.  This is a universal tempura-batter if you want to apply it to something else (green beans, mushrooms, sweet potatoes, etc).   And that the batter should be kept iced-cold, which is convenient if you’re frying frozen nuggets.

To form the nuggets:  (See notes above about freezing the chicken) Spread the skin-on chicken thighs and chicken breast on a sheet in one single layer, and flash-freeze for 2 hours until the skins have completely harden.  In a food-processor, add the chicken, cornstarch, salt and ground black pepper.  Pulse until all the chickens are evenly cut into finely minced pieces (think beef tartar), but not fully “ground” into a paste.  This is quite important as it retains the texture of the chicken, otherwise the nuggets will resemble meatballs or sausages.  The skins should be evenly cut into the meat if they were properly frozen.

Evenly whisk together all-purpose flour, 1/2 tsp of salt and 1/2 tsp of freshly ground black pepper in a shallow bowl.  Prepare a couple of baking-sheets that are lightly dusted with flour.

Take about 1 tbsp of the chicken-mixture, form it into a firm/tightly packed ball (if it’s sticking too much on your hands, wet your hands with a little water), then roll it in the flour then gently press it down (keeping it inside the bowl of flour) into a chubby disk (well, like a nugget).  It helps to maintain a “wet hand (chicken hand)” and “dry hand (flour hand)” system.  The nugget should be thinly and evenly coated with the flour-mixture on all sides.  Place it on the baking-sheets and repeat until you’re done with all the chickens.  You should have about 60 nuggets depending on size.  Flash-freeze the nuggets on the baking-sheets for 2 hours until completely hardened.  Then transfer to an air-tight bag/container, and keep frozen until needed.

To batter and fry:  Take however many nuggets you’re frying out of the freezer, set aside (doesn’t really need to thaw).  Whisk together all-purpose flour, tapioca starch, black pepper, salt and baking soda in a bowl.  Add the egg yolk into another large measuring-cup, then add enough iced water until it reaches 1 cup in total.  Whisk until even, then pour it over the flour-mixture while gently mixing in with chopsticks or a fork.  Do not over-mix the batter.  It’s perfectly fine if there are small lumps of flour here and there.  Add a few pieces of frozen nuggets in the batter to keep it cold (careful not to let them stick together).

Add enough vegetable oil in a frying-pot until it reaches about 2″ deep (I’m using a small, narrow pot so I didn’t need that much).  Heat the oil over medium-high heat until when a wooden chopstick is inserted in the middle, small bubbles form immediately around the chopstick.  Drop however many battered nuggets (let extra batter drain off for a few seconds before frying) into the oil without crowding the pot (the batter may break off into tiny pieces once it hits the oil.  it’s ok.  it should).  Lower the heat down to medium and fry until golden on all sides and increase to high heat for the last 20 seconds (you have to control the heat so that the batter isn’t over-browned while the chicken is still raw).  Drain the nuggets over a cooling-rack (see notes above about double/re-frying).  Remove small pieces of batter from the oil with a slotted spoon in between each batch.

Toss the nuggets with minced garlic, ground black pepper and ground white pepper.  Serve with some sprinkled chili flakes, and… the sauce:

To make the hot, sweet and sour sauce:  Combine pineapple juice, apple juice, lemon juice, tabasco sauce, granulated sugar, dark brown sugar and salt in a sauce pot.  Bring to a simmer over medium heat and reduce the mixture down by 2/3.  Take about 4 tbsp of the mixture out of the sauce pot and let it cool slightly, then whisk in the cornstarch until completely smooth and lump-free.  Add it back into the sauce pot and cook over medium heat, until the mixture has fully thickened and goes from opaque to completely translucent (meaning the cornstarch is thoroughly cooked).  Set aside until needed.

To make the truffle and Parmigiano mayonnaise:  Combine all the ingredients together until even.  Set aside until needed. 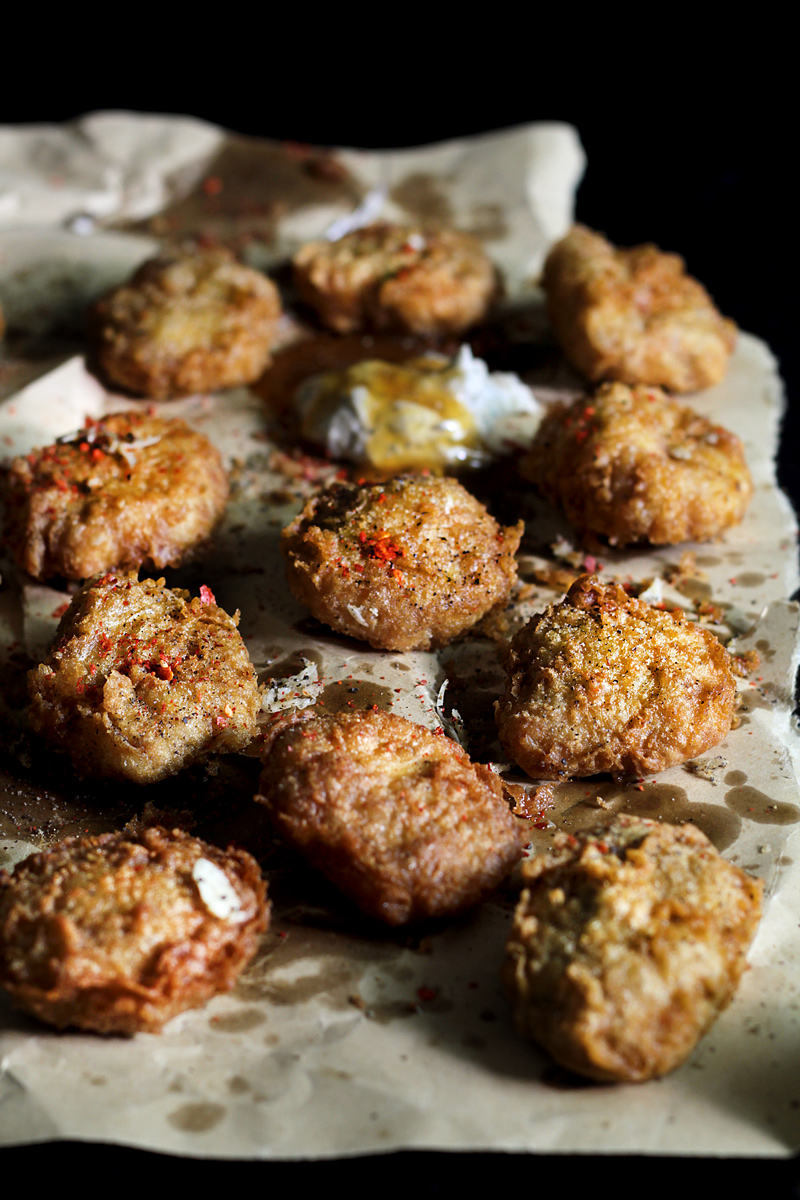