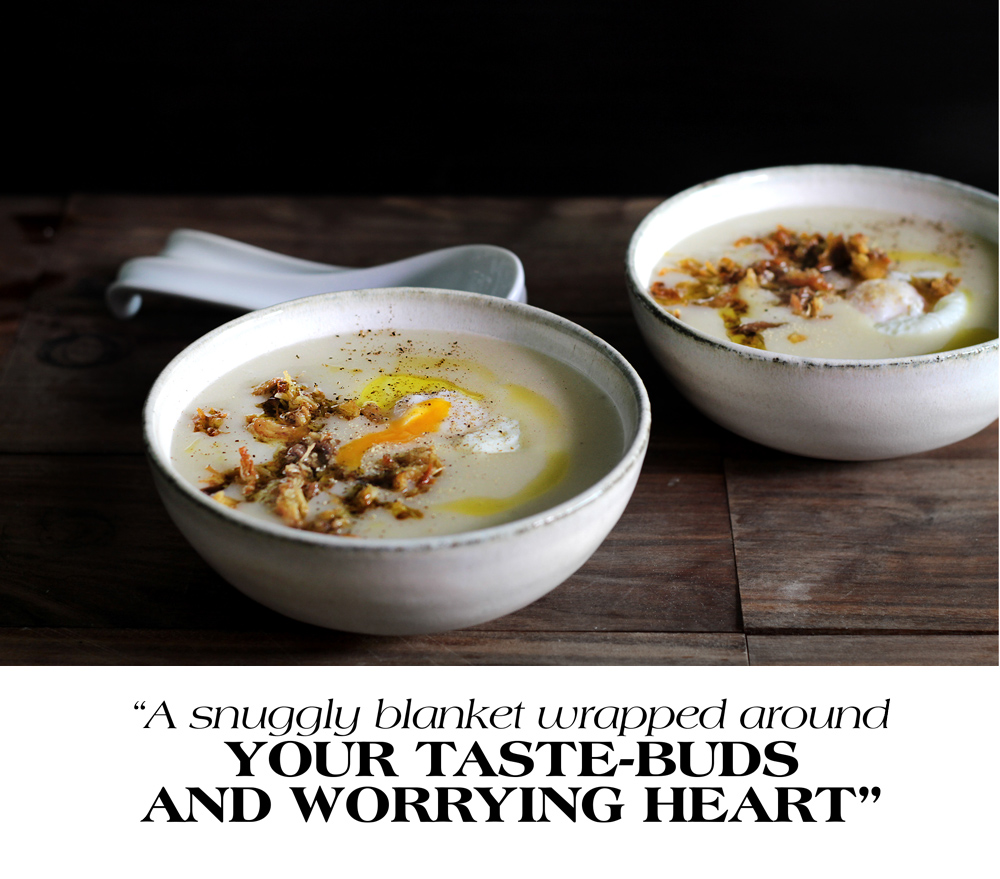 You know… this blog really wasn’t, even indirectly, meant to be depressing at all.  Angry?  Yes.  It’s kinda funny.  Depressing?  Is just depressing.  But what now?

I found myself murmuring these thoughts through the indifference of the keyboard, while I watched my dog sunken within a pile of blanket like a flaccid lump of meat, the very life in him crippled by the exhaustion of every hard-earned heartbeat.  His heart murmurs, the doctor said.  Why does it sounds like an expression you can put on a Mother’s Day card for God’s sake…  And what about an overgrown, sensitive big heart?  Fuck, could’ve gotten someone laid on a Thursday night even without game.  To shit with these expressions…

In reality, you can actually die of a broken heart. 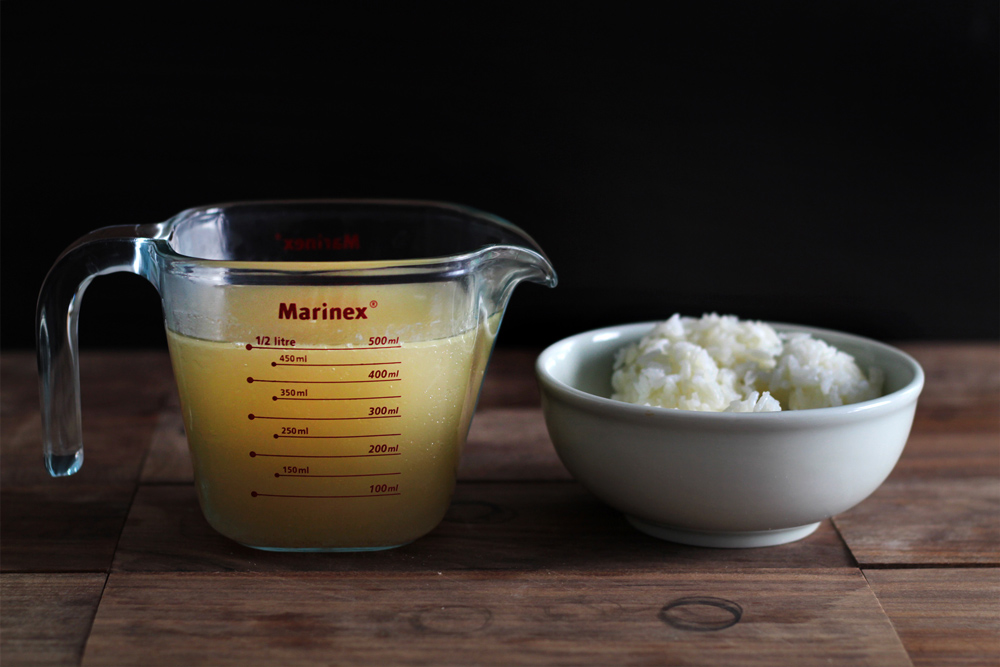 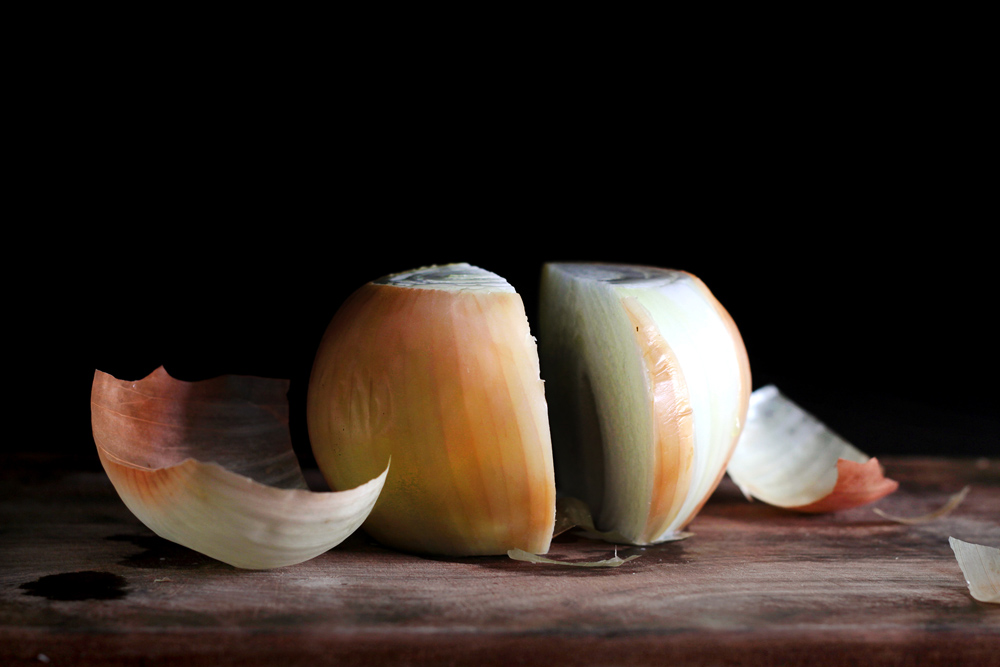 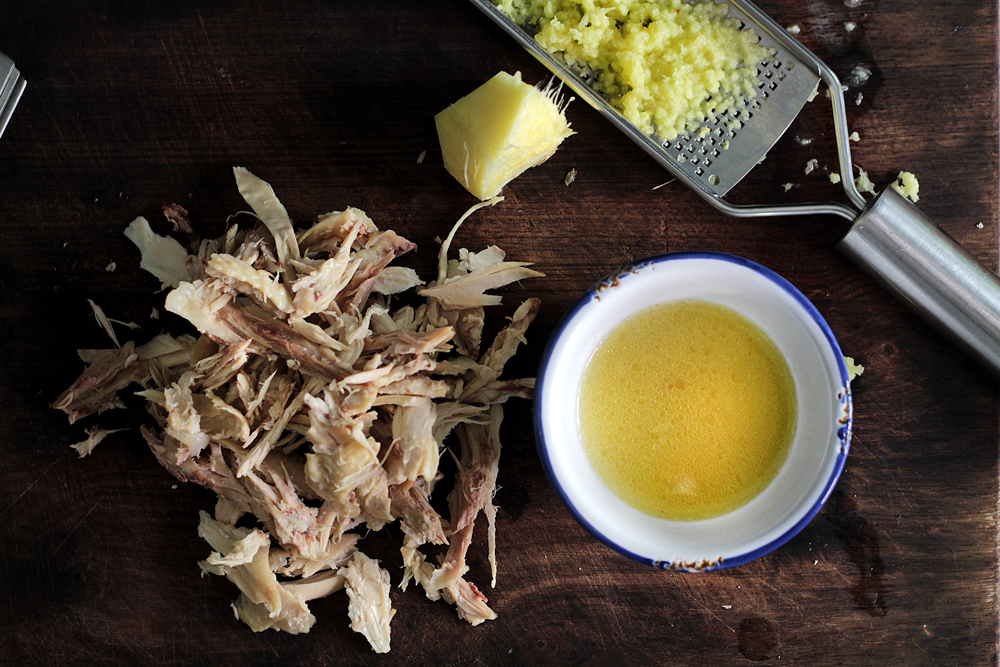 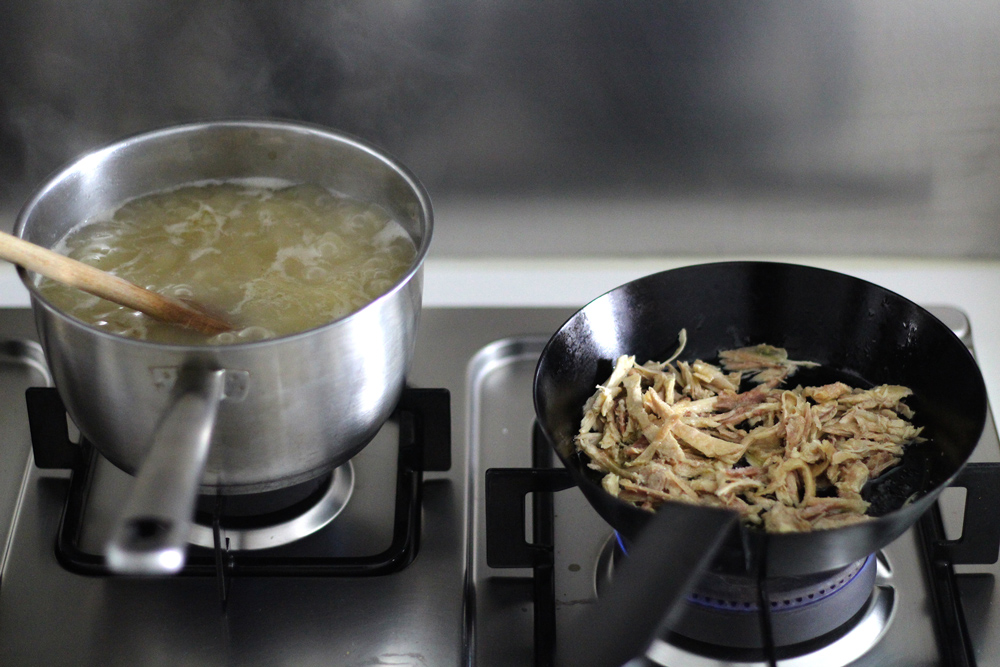 I’m sure you wouldn’t mind me just shut up right about now, with these self-indulgent ranting as if nobody’s got shit to deal with.  In fact, from reading stories in your own words, I know you do.  Whoever and wherever you may be, with your face and elbow deep in mud right now in the tug of war against reality.  I know we have that in common.  And for that exact reason, this accidental recipe, probably the most consoling thing, physically or emotionally, that I have put into my body since… I’m gonna say ever, is the best thing I can offer as my token of empathy.

To say, life sucks too much to drink bad soup.

Or, if you can even call this that.  I wasn’t kidding when I said this recipe was accidental, as in a whole pot of chicken and soup that was meant to seduce my anorexic dog for taking a lick, was devastatingly left untouched as he now fights every single bite of food as if it’s poison.  Too aware of the red carpet-season maybe?  Life is giving me chicken soup… I guess I should say, thank you? 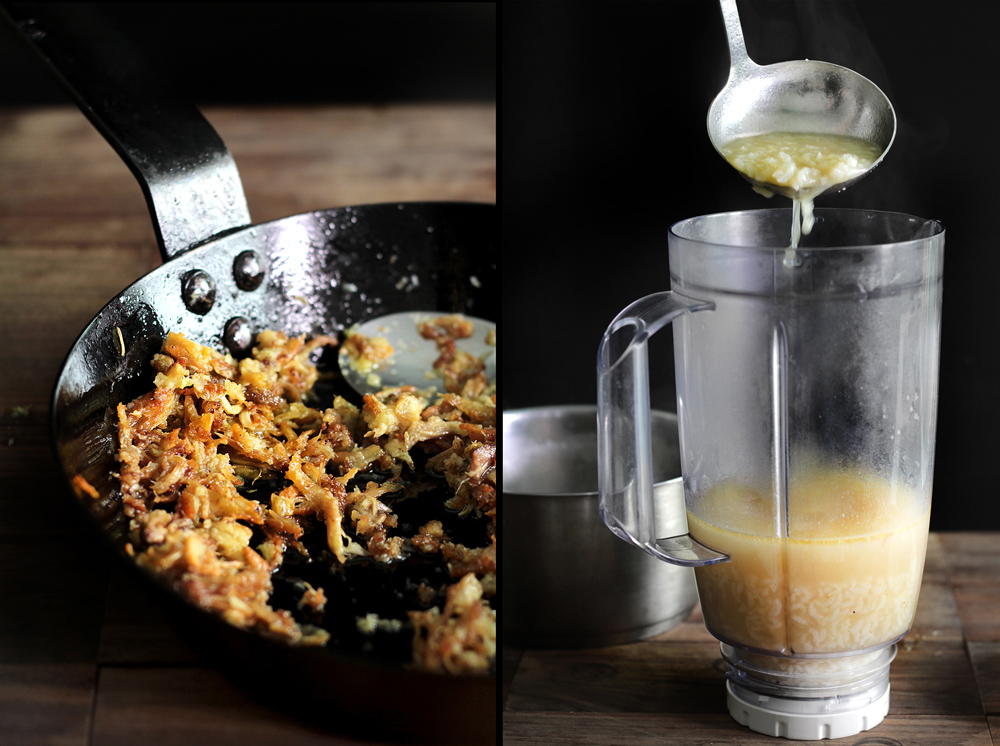 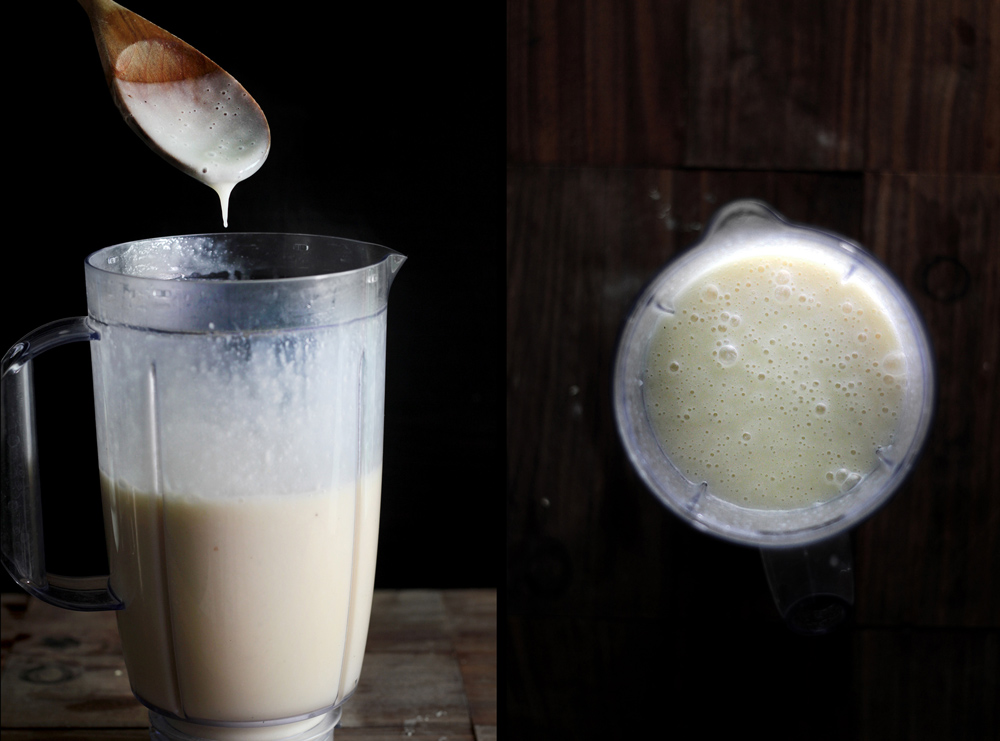 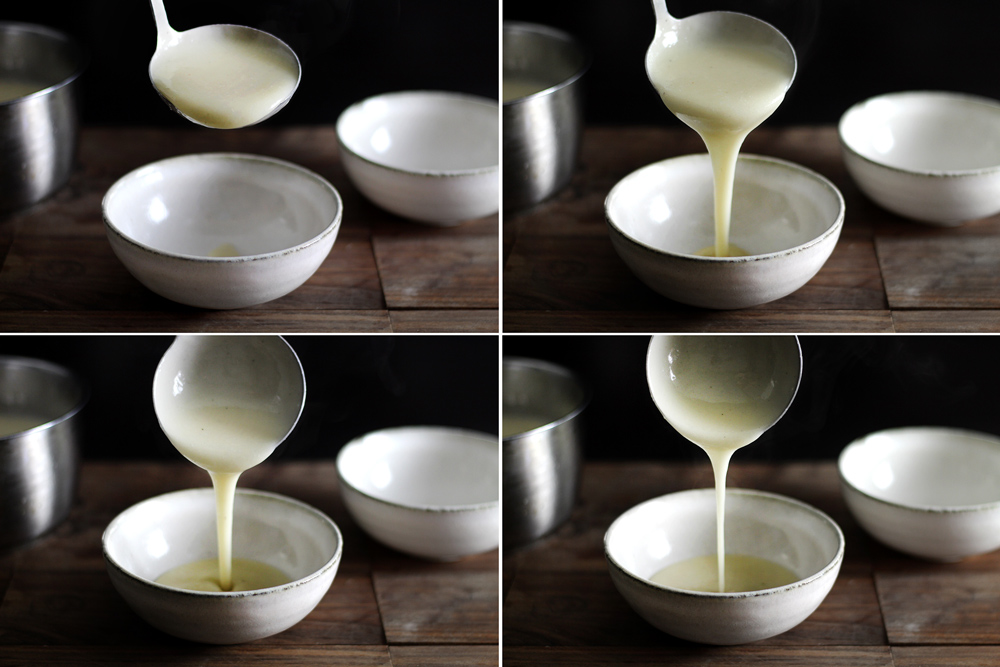 Not as is, of course.  You may not think there’s much to be done to chicken and rice soup… I mean wasn’t it already the original remedy for fixing reality hardships, such as sneezing and evening rains?  And we know the originals like to be obeyed.  But as my current life isn’t exactly sneezing nor raining, but instead, pouring the runs of God from the sky, I need something stronger.  Something substantially better.  A chicken soup that is thick and velvety without the use of cream, a snuggly texture simply by blending the soup together with the soften rice.  The inherently flavourless shredded chicken can be turned into bits of saltiness and crunch by browning in its own fat with grated ginger, as how Jason put it, “Where did we get this ham from?”.

Last but not least of course, come on, nothing heals better than how a runny yolk breaks.

There are three broken hearts in the house, and two at least felt temporarily comforted by this soup.  Whatever you’re going through, arrivals or departures, lost or found, I’m sure you could use 10 min tucked inside this edible blanket.  Feel better. 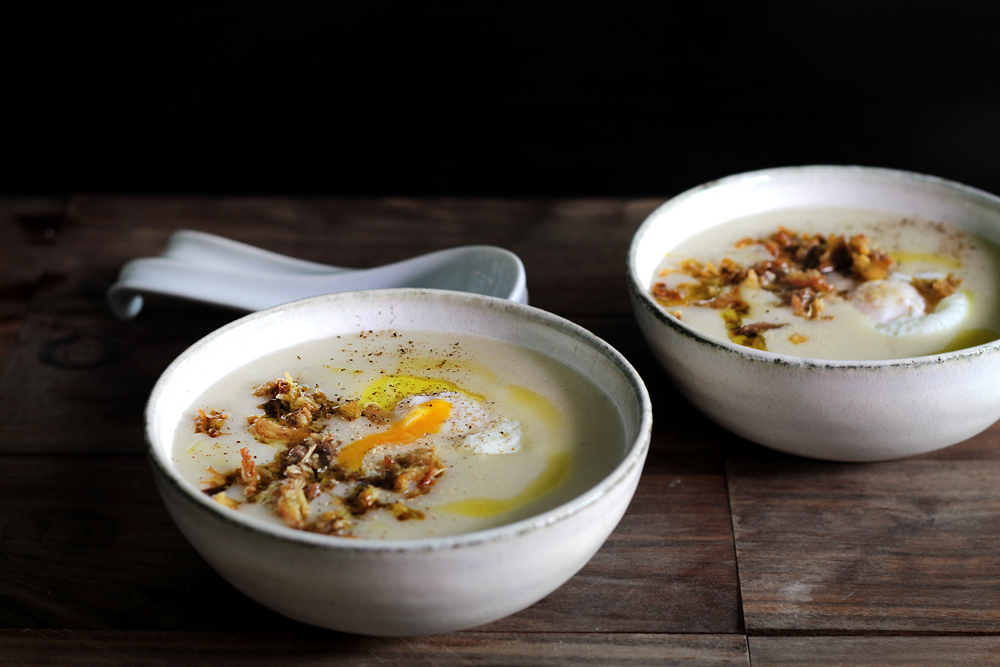 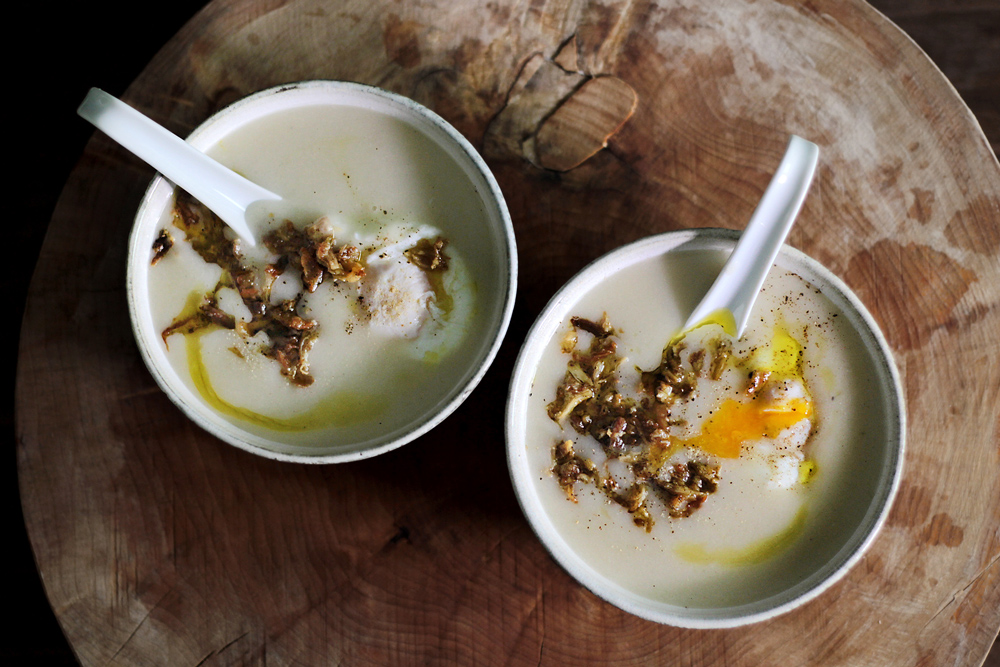 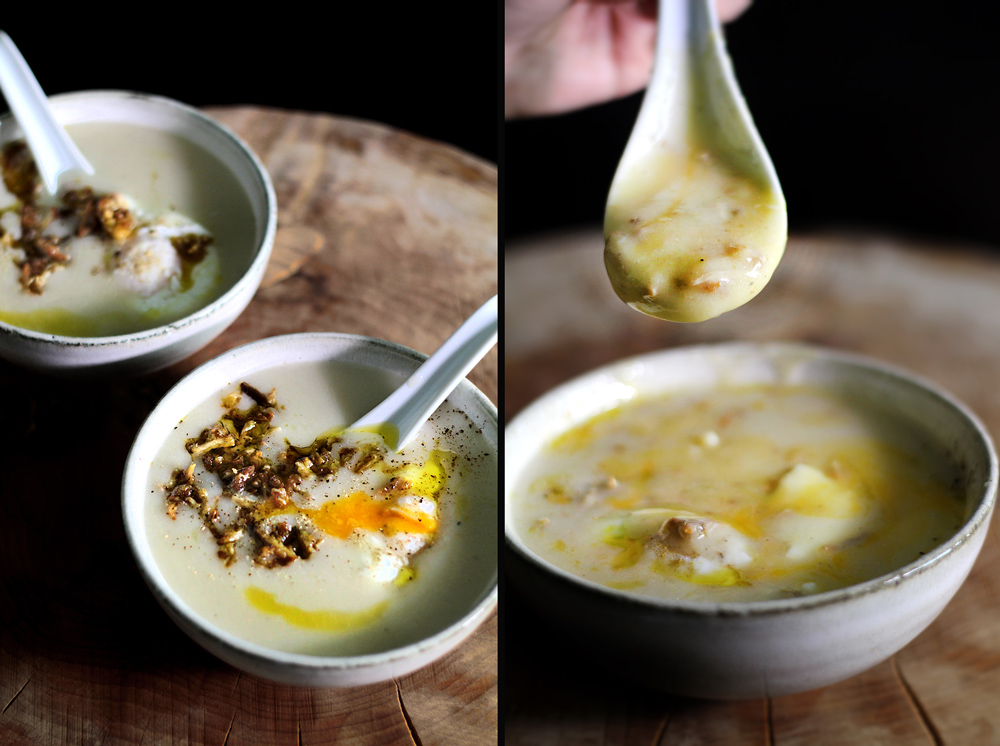 The stock I used is homemade and unsalted.  If you are using store-bought, you may need to reduce the salt accordingly.  A fast and easy way to get enriched stocks, plus making the boiled chicken needed for this recipe, you can do this:

Bring a large pot of water, with a few slices of ginger and scallion, to boil.  Submerge the chicken in the boiling water and cook for 5 min, until there’s no more scums/blood coming out of it.  Rinse and clean the chicken thoroughly, and place in a stock pot (this will give the stock a “cleaner” taste).  Peel the onion and scorch the surface over direct flames (on stove-stop) until roughly charred.  Add the charred onion and sliced ginger into the stock pot with the chicken, and add 6 cups of chicken stock.  Keep the soup on simmer until the chicken is cooked through.  Remove the chicken and strain the stock (do not skim off the fat as you’ll need it later).  Keep the chicken submerged in the strained stock until needed.

To make the rice-thickened chicken soup:  Sweat the onion with 1 tbsp of olive oil, salt and ground black pepper in a stock pot over medium heat, until translucent and soft, but not browned.  Add the chicken stock and rice, and simmer for 10 ~ 15 min until the rice is very soft.  Transfer to a blender and blend until completely smooth.  Return the soup back to the pot and keep warm with the lid on.

To make the browned and crispy chicken bits:  Add the finely shredded chicken, chicken fat, olive oil, salt and ground white pepper in a skillet and cook over medium-high heat.  Some moisture mixed inside the chicken fat will be cooked off, and keep stirring occasionally until the chickens are crispy and browned on all edges.  Add the grated ginger and cook for a few seconds only, then turn off the heat completely.  Set aside until needed.

To serve:  If the soup appears to be too thick to your liking (it may thicken slightly over time), add a little bit more stock to thin it out slightly.  Serve the soup with a soft-poached egg, a good dose of browned and crispy chicken bits, plus a drizzle of chicken fat and a dab of ground white pepper. 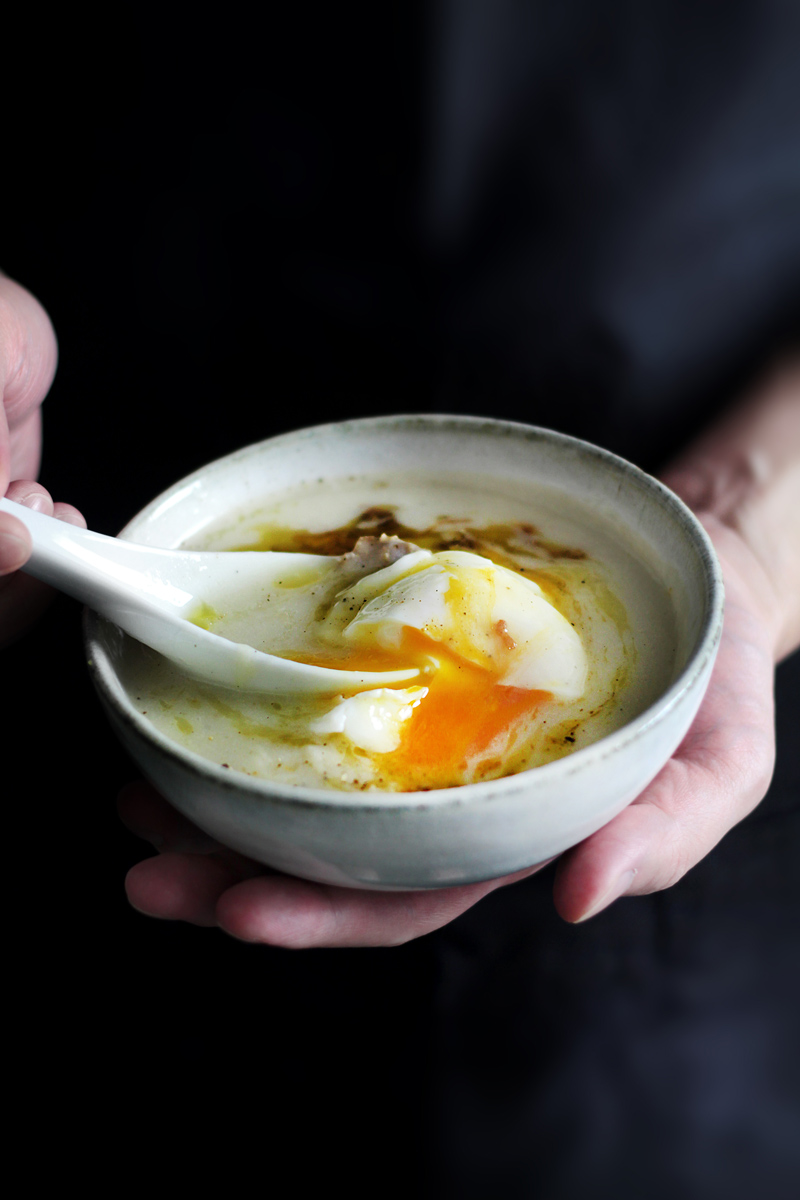