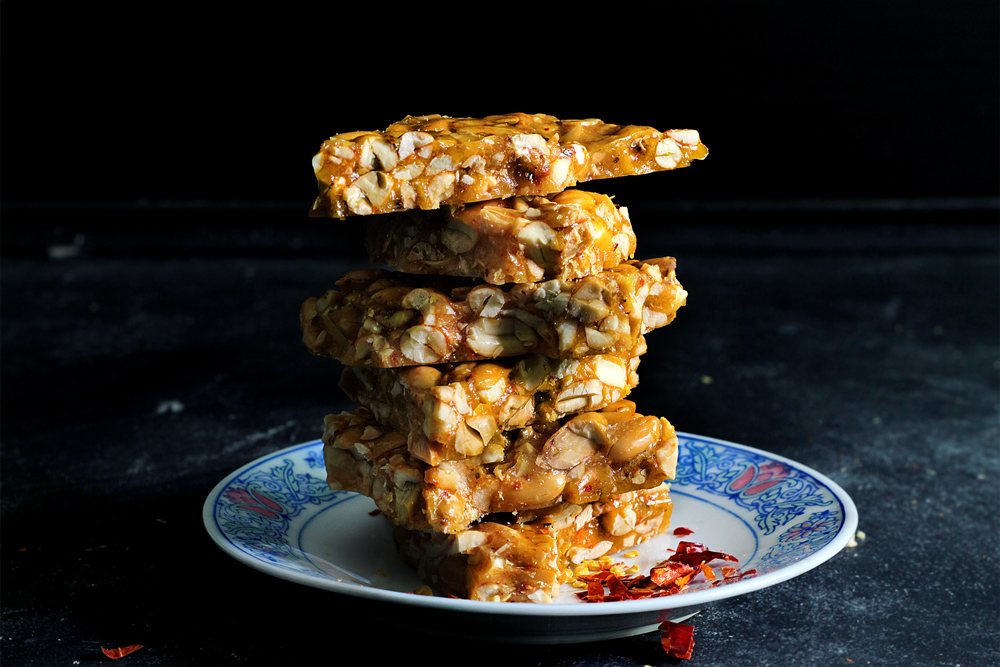 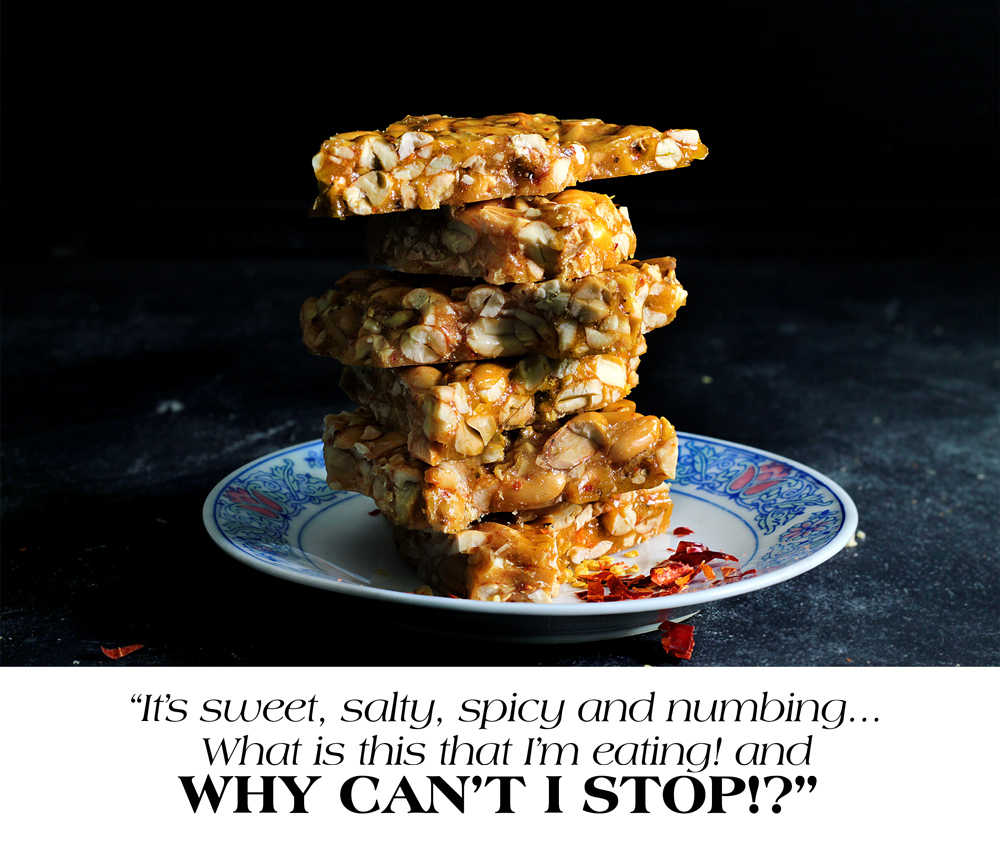 They say that comedy is tragedy plus time.  They say that there’s a very thin line, separating laughter and pain… humor and hurt.  Sounds like comedy is just an accidental kid of the abusive reality-junkie mom called life, trying hysterically to grow up as sane and functional as possible, maybe go to college, trying to make sense of it all like we all are, by drinking pain as fuel for jokes.

Well, if all that is true, there’s nothing funnier… than telling stories about a dead pet. 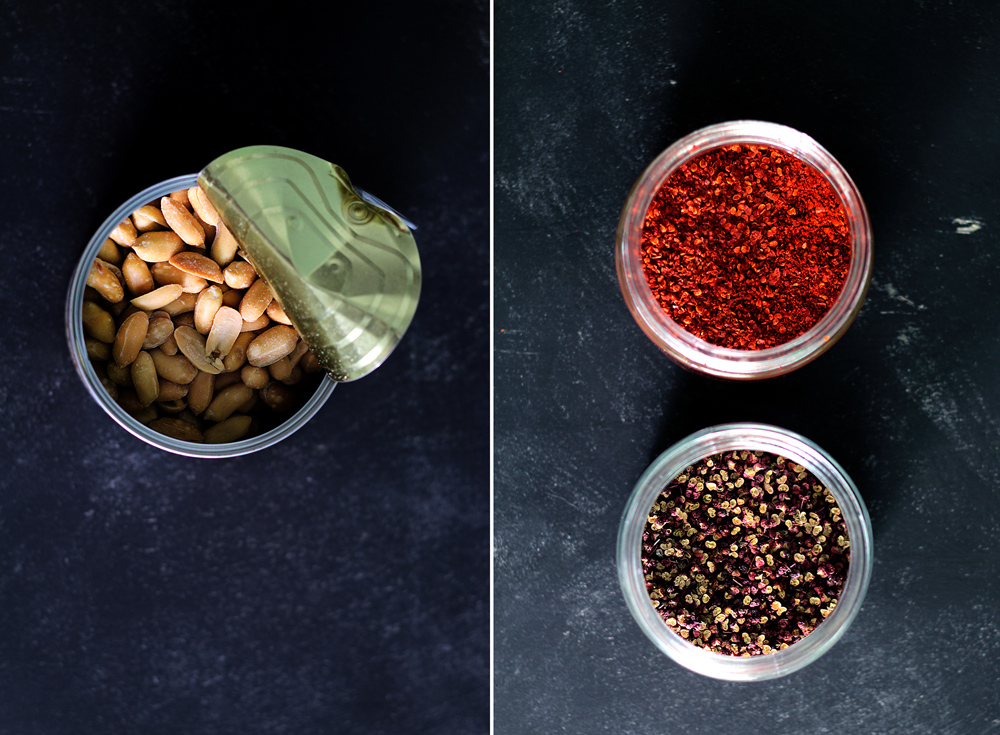 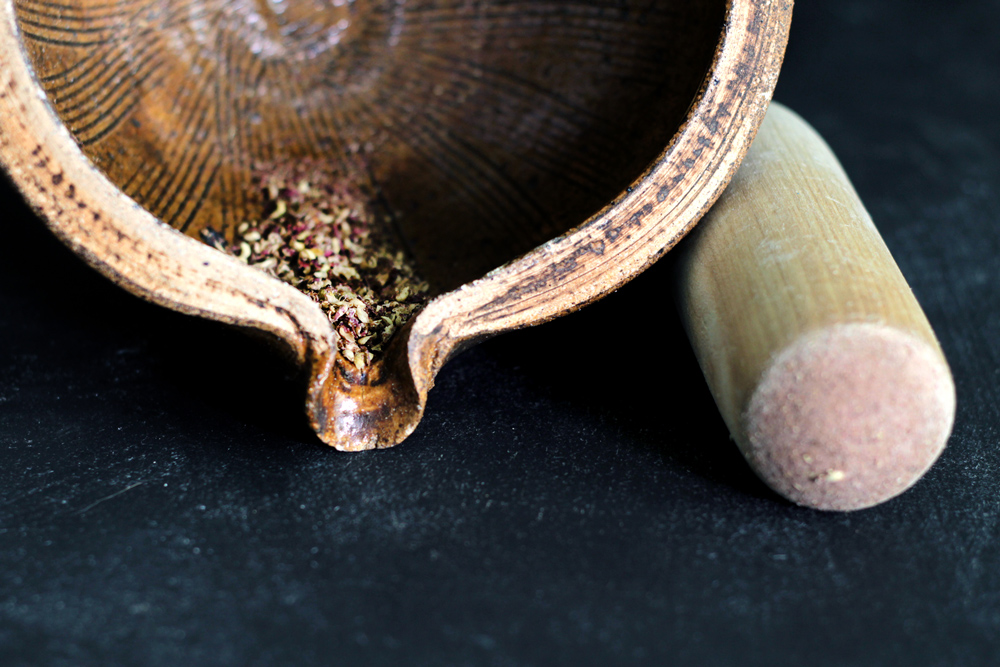 I’ve told you about this, right?  I have a dead dog.  Excuse the bleak distinction, but it makes the preferred present tense technically accurate, as opposed to Jason telling people that he has three dogs as well as lots of lazy hair follicles.  To make even more distinctions, she is a French Bulldog with the most comical and quirky sense of humor, and in hindsight I hope it isn’t because she finds life tragically hilarious.  But unfortunately, for her mom who’s constantly trying to find stories to fill the blank spaces in between photos, none of her life-experiences… and I mean none, is within the close proximity of being appetite-inspiring.  If you’ve ever raised a funny French Bulldog, you’d know there’s a lot of those.  Having said that, the one I’m about to tell you, isn’t any different.

I must because of the story’s irrefutable relevance to what I’m trying to sell you.  I hope that in the most unconventional ways that the story about a French Bulldog’s behavioral madness over these, China’s mutated and nonsensical yet irresistible adaption of America’s peanut brittle, could turn your impulse to reject into curiosity… and when you actually take your first bite, you’d say to her, “it’s ok, I get it, too”.  And she’d nod empathetically. 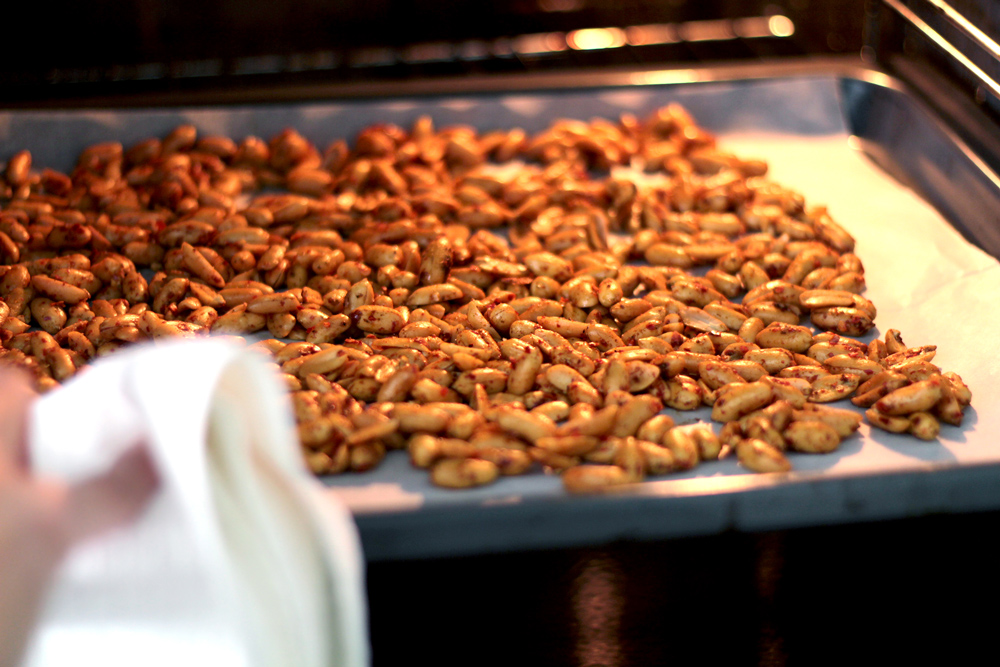 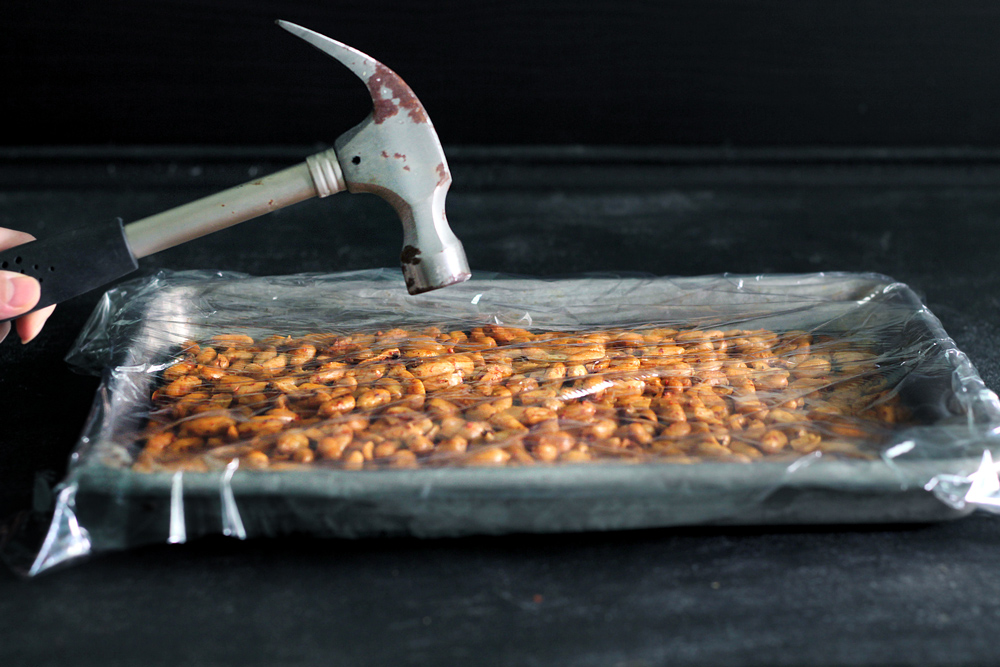 They call these, the mala peanut brittles.  It means “numbing and spicy” which directly implies that there is more than a subtle presence of the infamous, tongue-paralyzing sichuan peppercorns and no sorry dose of dried, red hot chili flakes.  The confusion is normal.  Let me start by saying that yes, it doesn’t make no fucking sense at all.  It’s sweet and it’s salty.  It’s numbing and it’s spicy.  At first bite your brain screams what the heck is this that I’m eating!, and directs you to take a second… third… fourth bite to investigate.  After a whirlwind of confusion and battling brain-signals, the screams louden into Oh Lord Oh Mighty Shit what the HECK is this! and more importantly, WHY can’t I STOP?!

Right.  It’s that kind of food.

But none of it raised a warning that says these are probably not something you want to leave unattended on the coffee table.  Well because, as dangerous as they are, they come in cube-sizes which are then individually guarded in each fortress-like plastic-wrappers that are sealed so tightly, even I sometimes have trouble opening them.  And so we left it, a whole bag filled with at least 18 smaller wrappers, and came home to a crime scene and a whole week of evidence-gathering that followed. 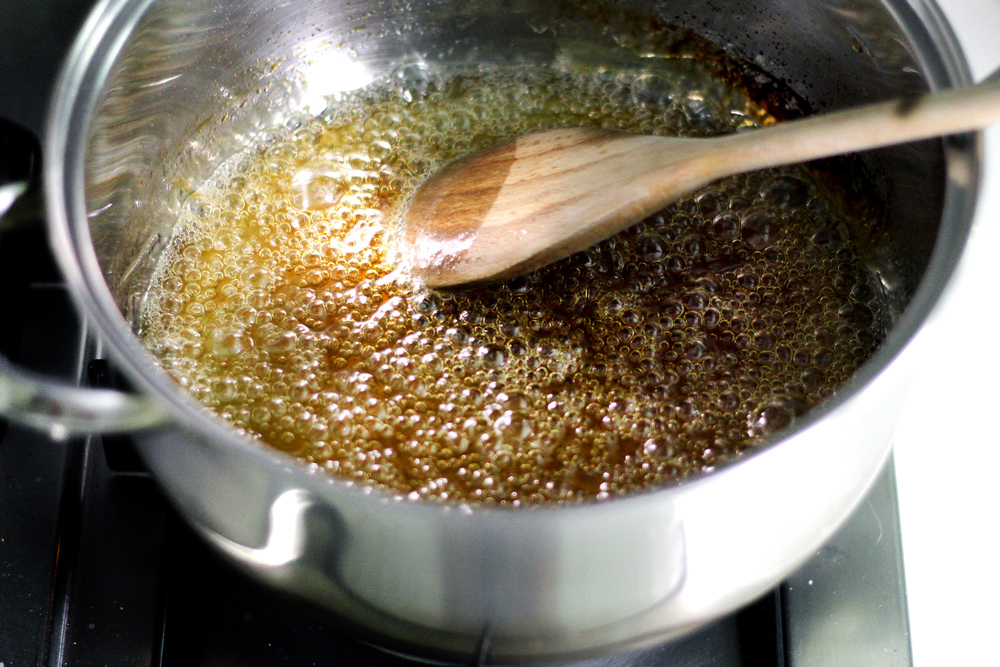 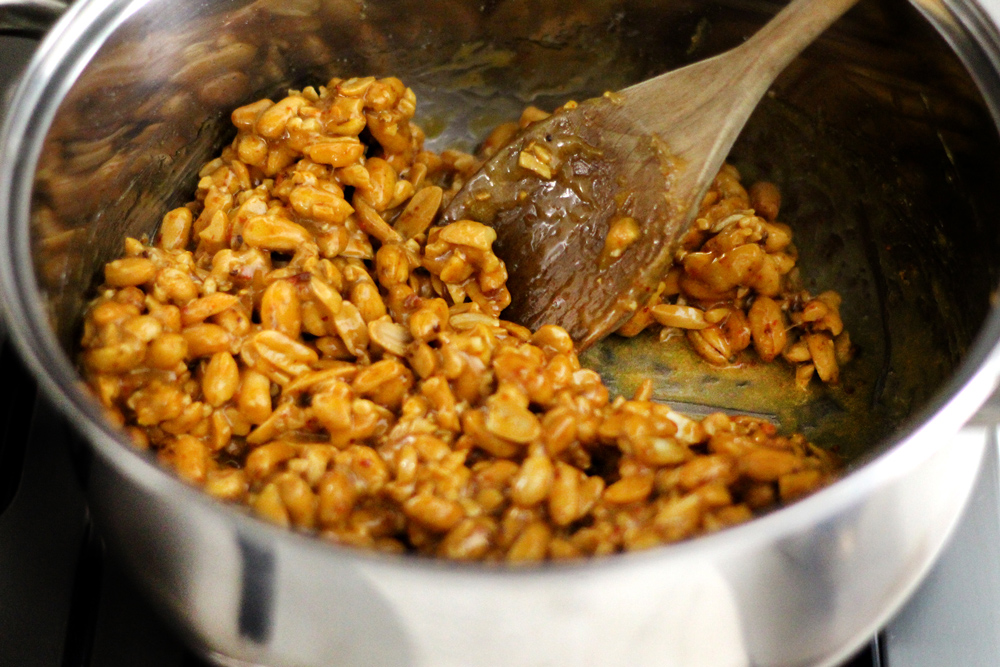 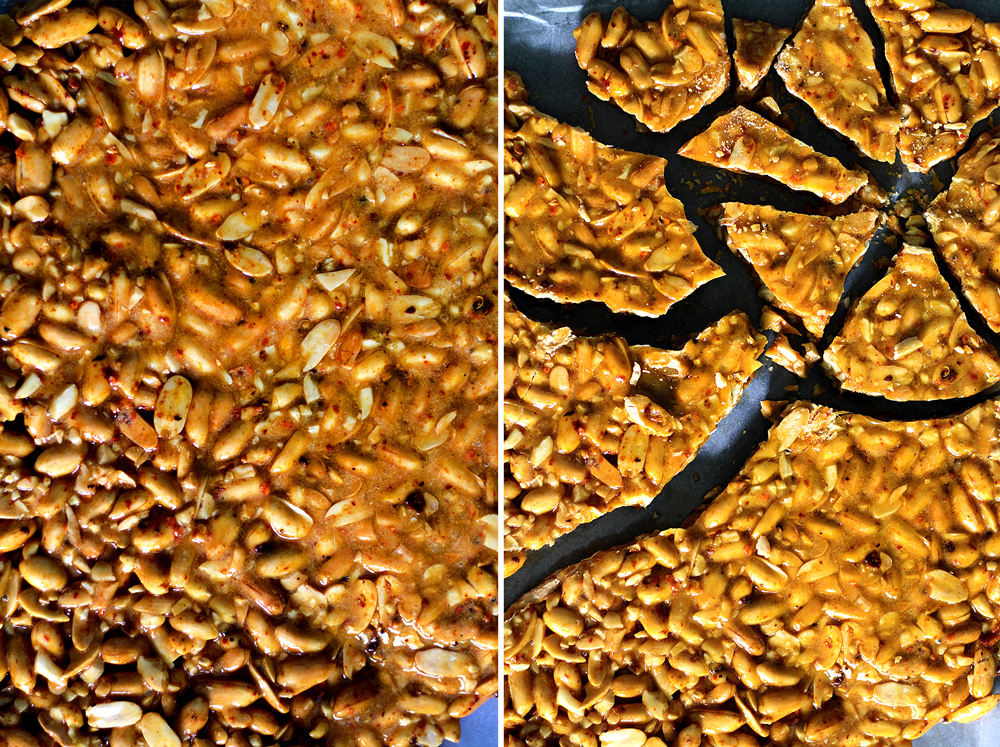 You know what happened.  Every dog-parent could heart-feel the cold-sweating fear when they come home to an empty, butchered bag of something really, really, bad.  And I mean just an empty bag.  Sweeping clean floor, no crumbs, nor torn pieces, not even a suspicious scent on the whiskers or signals from any of the three presented suspects that they were ready to talk.  All stood firmly in a four-legged, unified line of alliance against allegation.  The theory is either one or all of them, ingested all or each responsible for a number of a total of 18 pieces of mala peanut brittles, together with the factory-dyed plastic wrappers.

There was only one way to find out.

I first apologize for the foulness of the story but there is just no way to tell one about a French Bulldog without mentioning… poop.  Starting from day three, hot-piping truth began to reveal itself in one steaming, thoroughly examined evidence after another, and it became as bright as daylight that this was none but a one-dog-job.  A French Bulldog who has a history of sanity and restrain to NOT completely finish a bag of Doritos, Lay’s BBQ chips, Starbuck’s cinnamon scones/cookies/coffee cakes/muffins, a bag of brown sugar, a box of spaghetti, a bag of MSG, and many bags of various fruit gummies (which ended up decorating her blanket like twinkle lights), couldn’t help herself but to devour all 18 plastic-wrapped, numbing and ass-tearing spicy peanut brittles in such ferociousness.  I’m just sayin’.  These are that good.  Are you sold or what?

PS:  Please take comfort in knowing that this particular incident wasn’t what killed her.  Too bad.  Death by mala peanut brittles would’ve been comedy-gold. 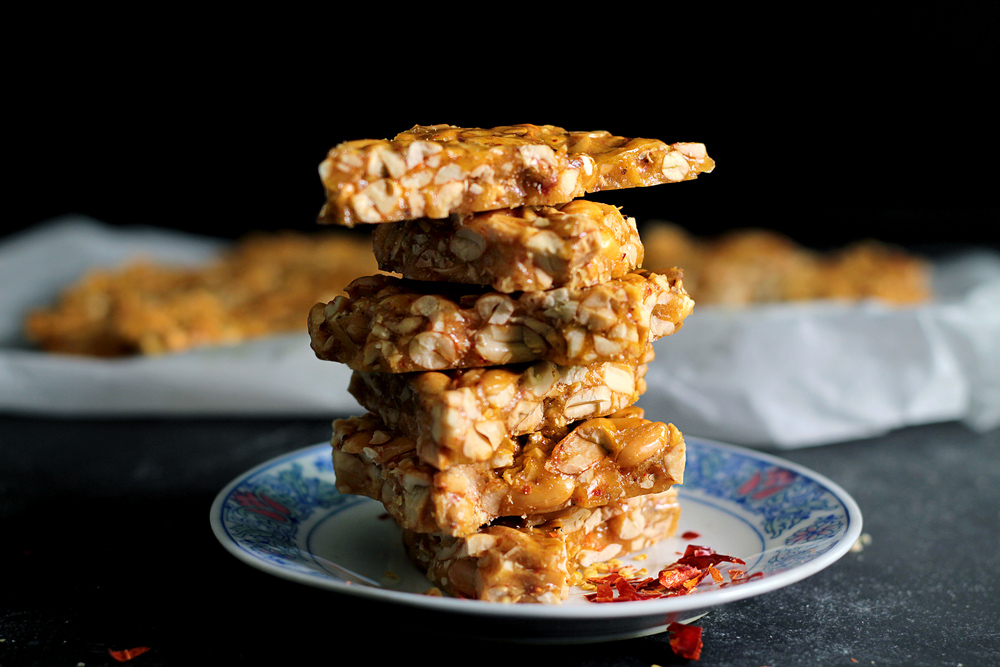 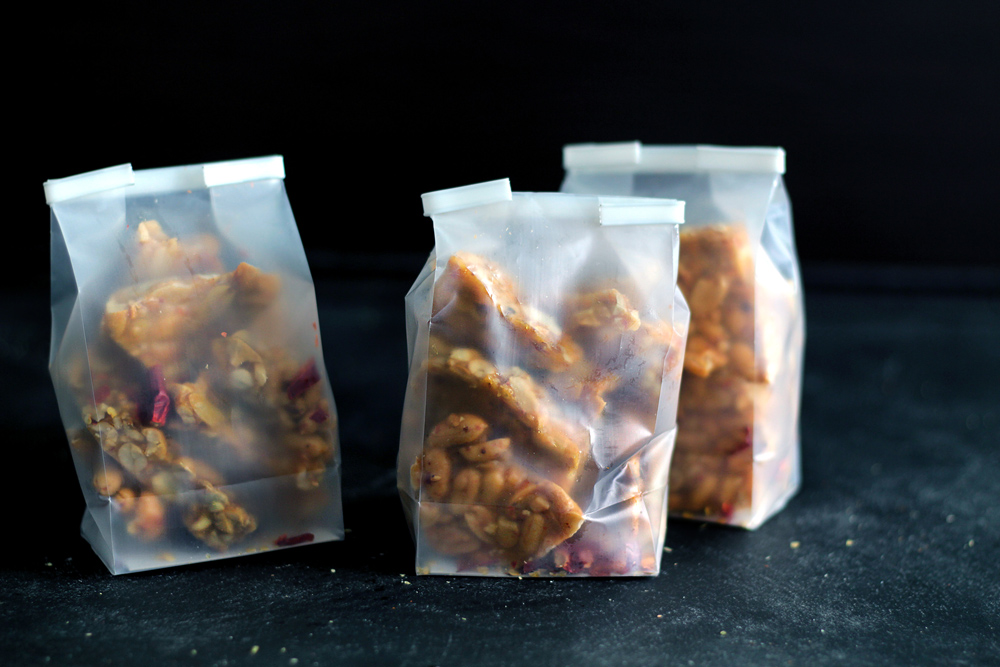 1 1/2 tsp of red sichuan peppercorn will give the brittles a forceful punch of numbness of fragrance, which is what the original intended.  If you are more of a sichuan peppercorn-beginner, you can start with 1 tsp first and see how that suits you.  Moreover, the recipe is based on the assumption that store-bought salted peanuts are USUALLY lightly salted at best.  But if for some reason your roasted salted peanuts are like… potato-chips salty, then you might have to reduce the 1/2 tsp of salt to 1/4 tsp.

Finely crush the sichuan peppercorn in a stone mortar or spice-grinder.  In a large bowl, first fold 2 tbsp of beaten egg white and salted peanuts together until evenly coated, then add the crushed peppercorn, chili flakes and salt, and fold again until evenly mixed.  Spread over a parchment paper-lined baking sheet and bake in the oven for 6 ~ 7 minutes, scrambling them with a fork once in between, until the surface of the peanuts are dry (remember, the peanuts were already roasted.  we are just applying more flavours).  Let the peanuts cool COMPLETELY inside the baking sheet.

Cover the peanuts with 2 layers of plastic wrap, then smash them with a hammer to crush about 1/3 of the peanuts into small pieces.  You should have peanuts in whole, and in small pieces at the same time.  Transfer the peanuts into a bowl and mix with 1/3 tsp of baking soda, and leave the unsalted butter on top (this just makes adding them into the caramel easier and swift).  Set aside.  Apply a little bit of cooking-spray over a sheet of parchment paper and a spatula, or rub both with a bit of oil (you can use the same parchment paper inside the same baking sheet).  Set aside.

In a large pot (the caramel will bubble and foam later so you’ll want enough room for this to happen), add granulated sugar, water, corn syrup and salt, and cook over medium-high heat.  Stir gently with a wooden spoon only occasionally, and cook until the mixture turns from completely clear to a light amber color.  This will take very roughly 15 ~ 20 min, but DON’T depend on the time given.  Once the sugar turns light amber, turn off the heat IMMEDIATELY (it will go from beautiful amber caramel to bitter and burnt waste-0f-time in 5 seconds).  Give it a couple more seconds (the color will continue to darken very fast), then add the peanuts with the baking soda and unsalted butter.  Quickly stir the mixture with a wooden spoon until it’s evenly mixed, and that the foaming has subsided.

Pour the mixture onto the oiled parchment paper and spread it with the oiled spatula.  If it’s cooling too quickly and becomes un-spreadable, cover it with another piece of parchment paper AND A KITCHEN TOWEL ON TOP (otherwise you’ll BURN your hands), and press it down with your hands.  Once flatten, chill in the fridge for 15 min to cool down.

Shatter the brittle with a hammer, or cut with a knife.  Keep in air-tight bags/container for 1 week. 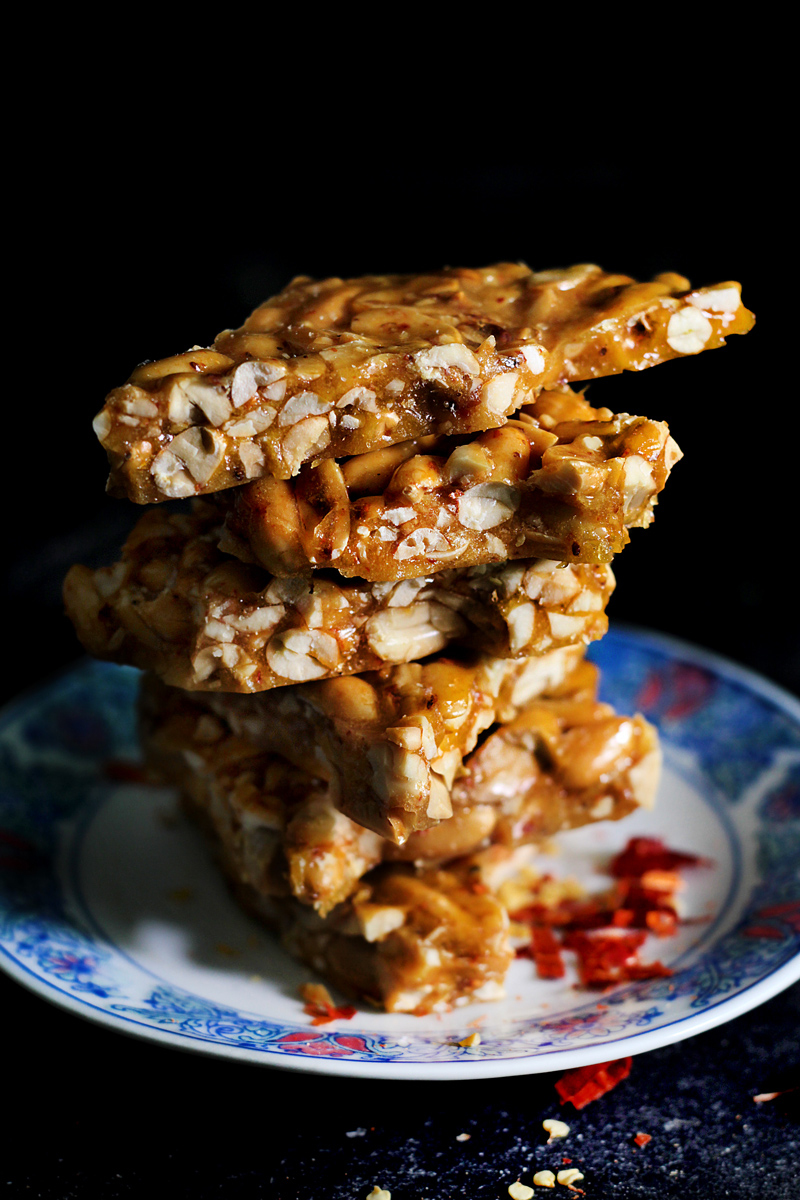