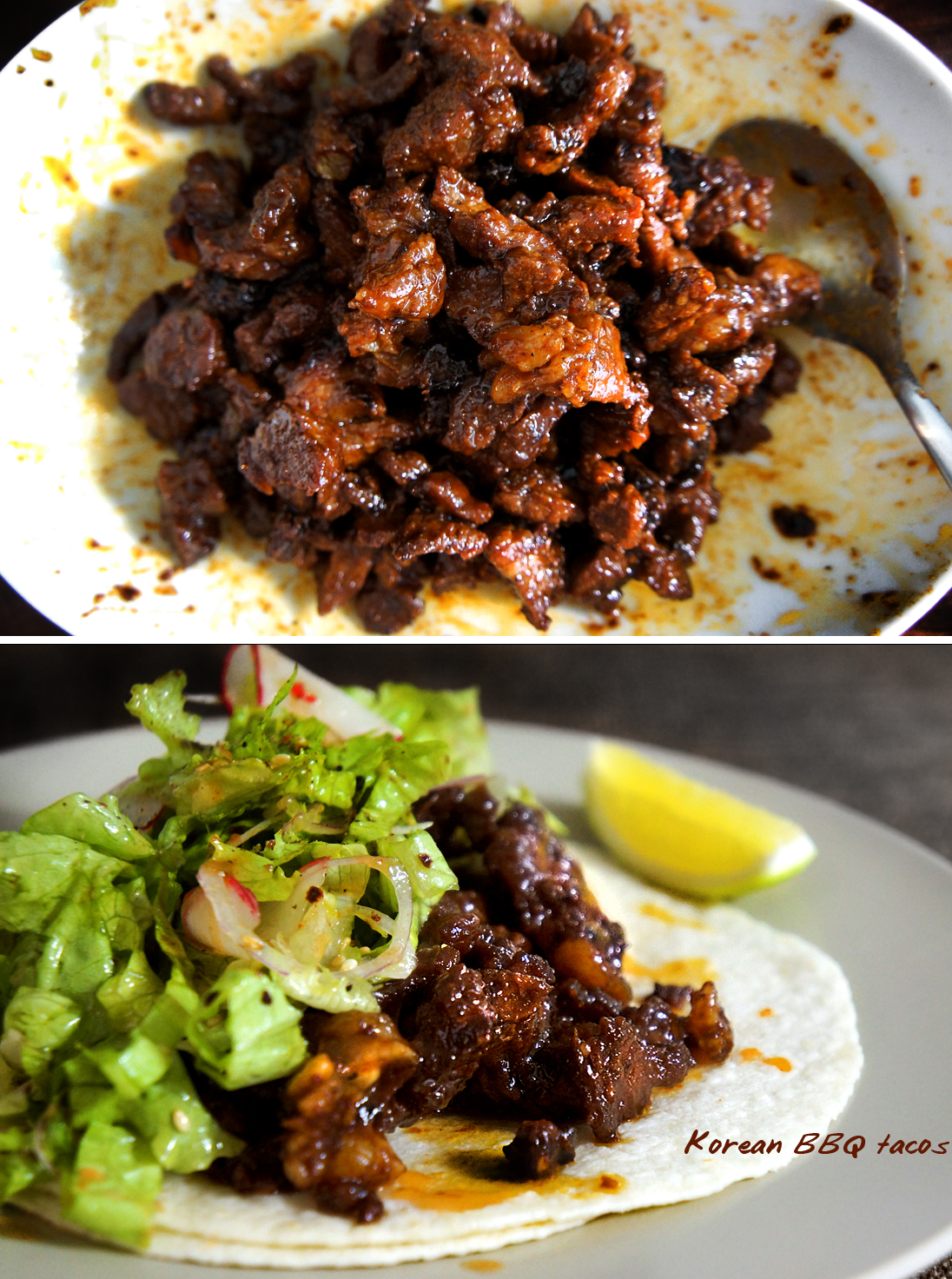 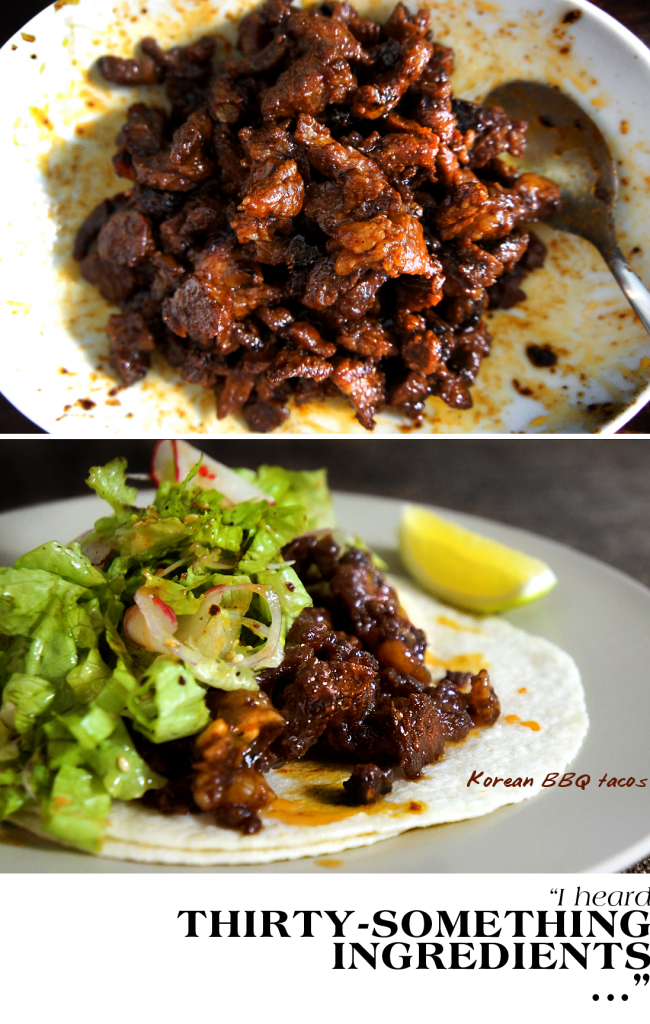 I could never live in LA…  What can I say?  I’m a city person.  LA is NOT a city.  It’s a glorified suburb if anything, run by GYM-hugging, yogurt-dipping and smoothie-drinking fitness-zombies who cares more for over-sized sunglasses than foods.  And I’m afraid we can’t be friend if you told me you want to give up culture in exchange for a place with no seasons…  Yeah that’s snow.  It’s called winter.  But let’s just say in an alternate universe where I fell in love with a cellulite-free buttocks over butter, and a car engine over my vintage bikes, and decided that I COULD actually live in LA… what would I be doing there everyday on my carbon-emitting vehicle?

I would be gladly chasing the Kogi truck. 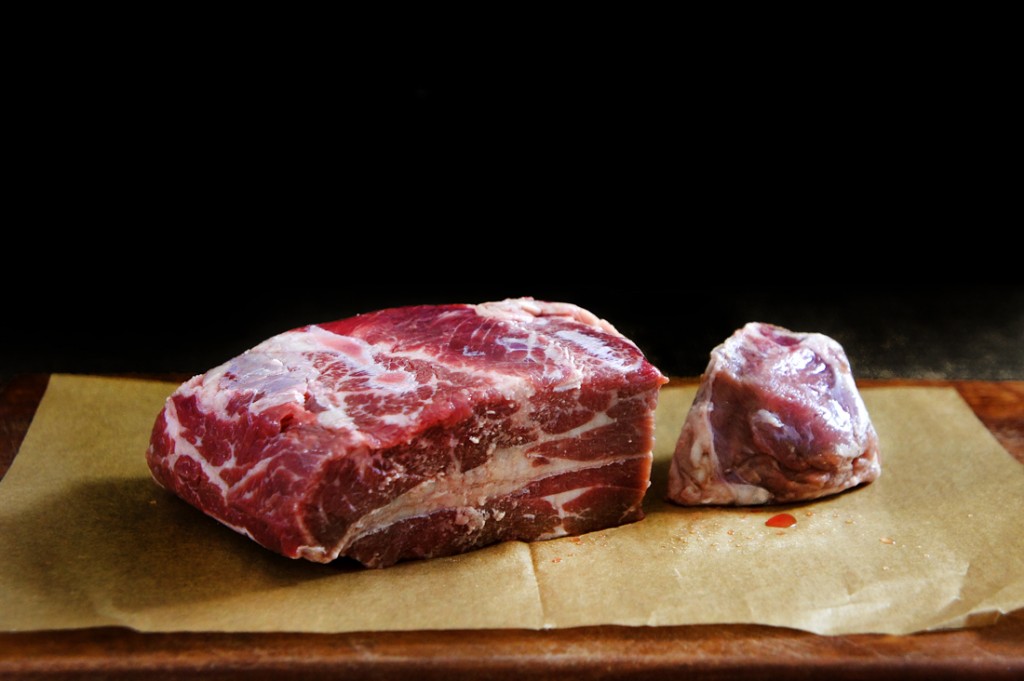 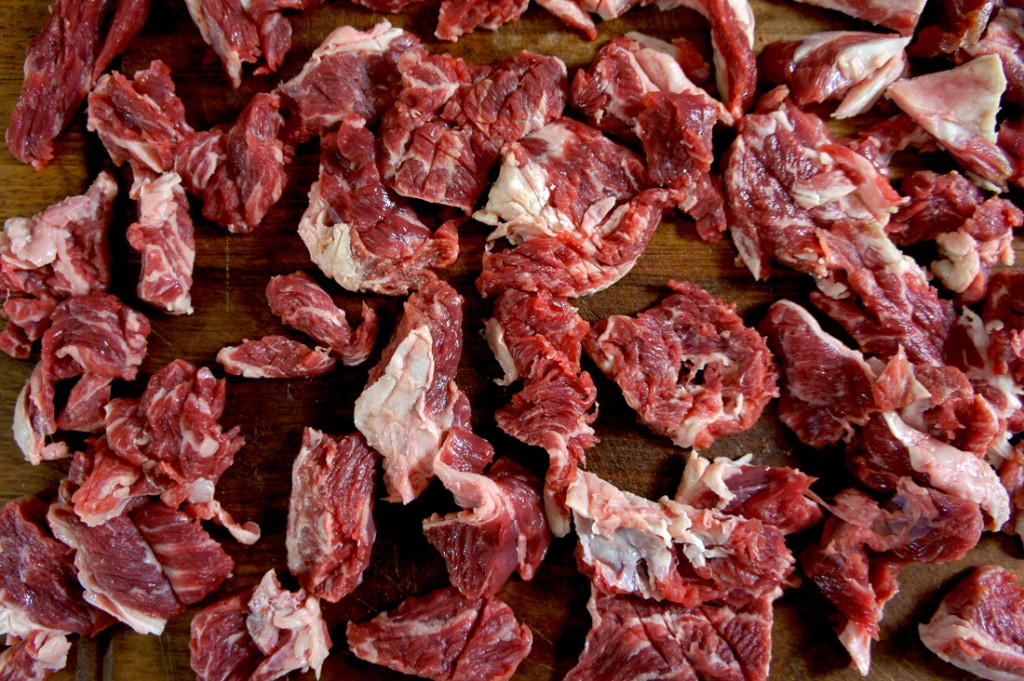 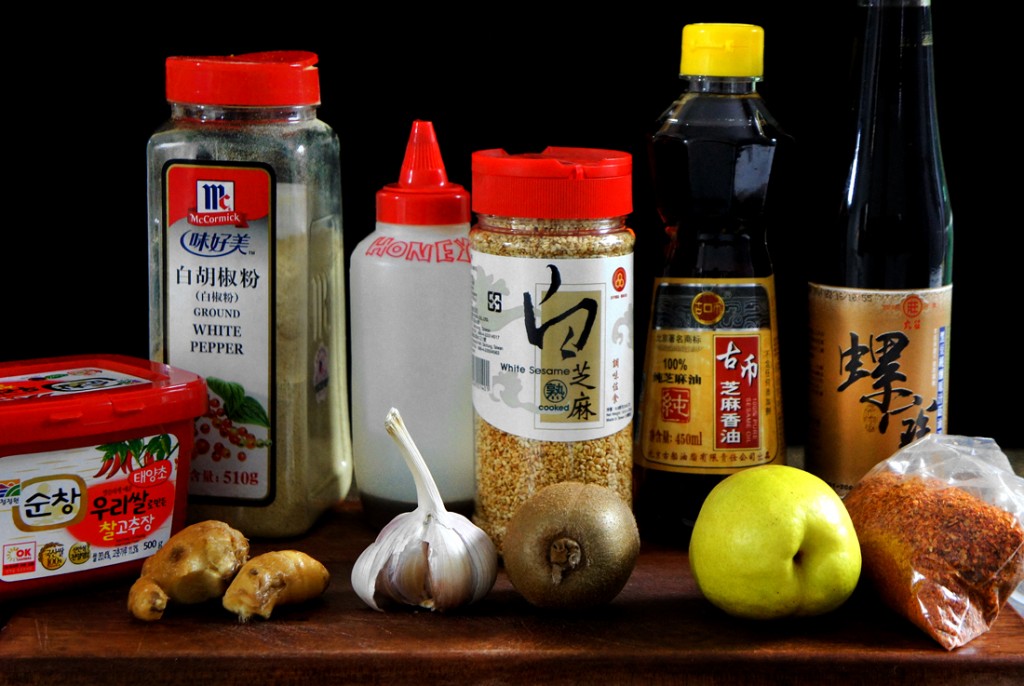 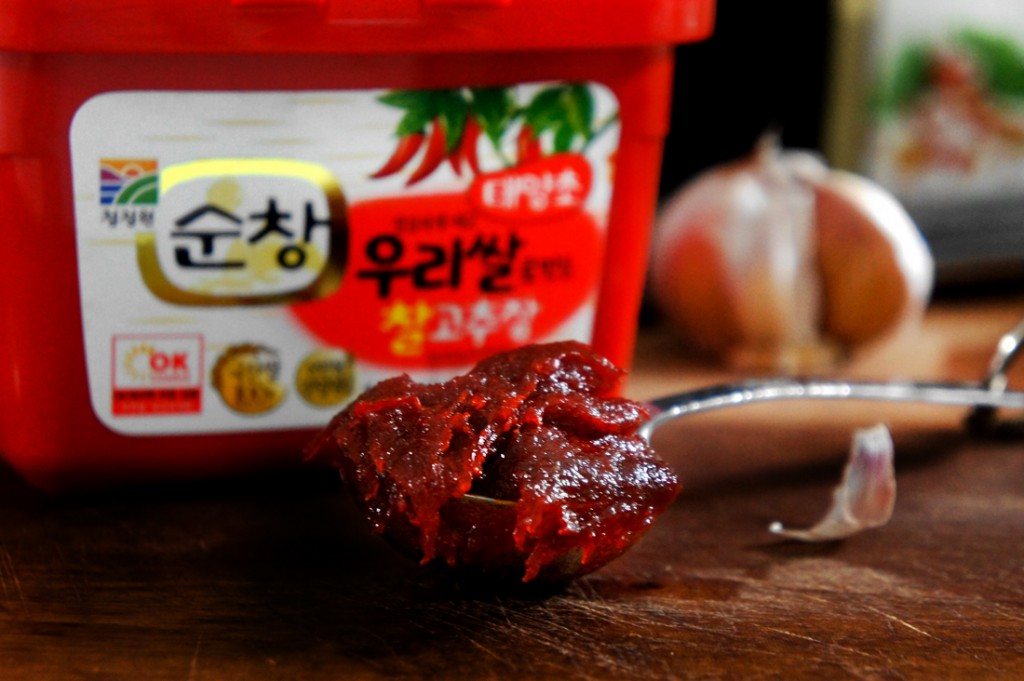 What is the Kogi truck, and what wicked spell does it have on me?  Legend has it that there runs an elusive, ever-moving vehicle only seen by the most faithful of followers around its holy habitat that is LA, said to carry the most explosive and satisfying one-bite-wonder come to known as – Korean BBQ tacos.  And how does an East-coaster who’s been wrongly displaced to an even-further continent come to know of such legend?  Well, let’s just say I’ve been on a spiritual communication with the Kogi truck via my satellite dish for quite some time now… digitally.  I believe “grok” is the word… that is… never physically… which is… I’ve never had it.  Yes… again!  I really want to avoid looking like a fraud who post recipes based her own imaginations on how OTHER THINGS would taste.  But believe me, I WISH I have been on the back of the Kogi truck like a dog on legs, exhausted a shameful effort of “human-relations”in exchange for its secret recipe and FINALLY, publish it for the greater good of all mankind.  I WISH. 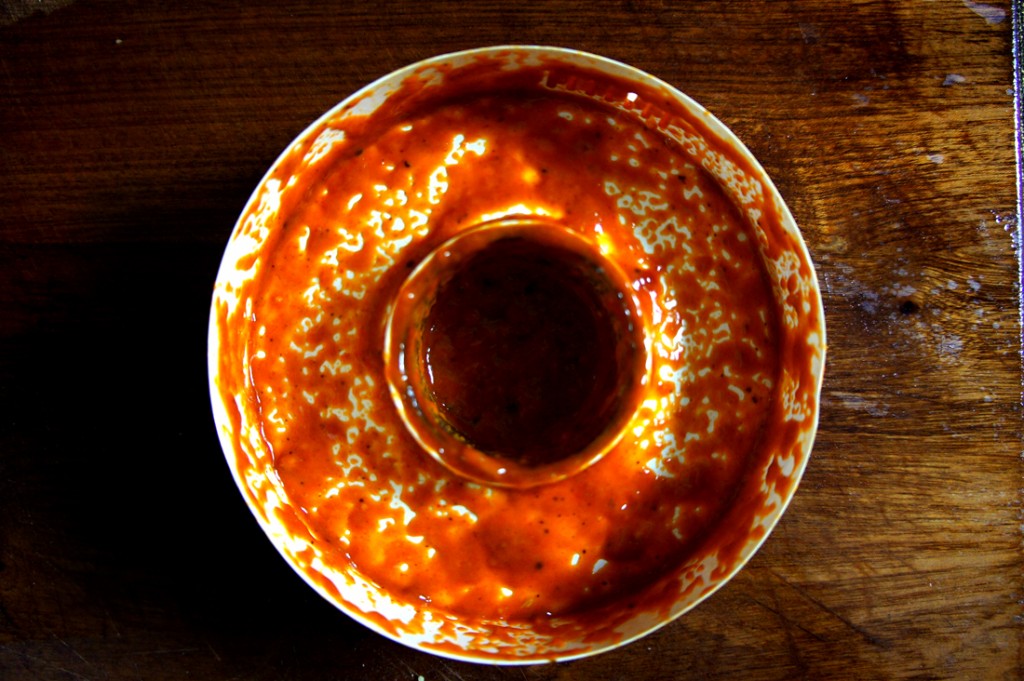 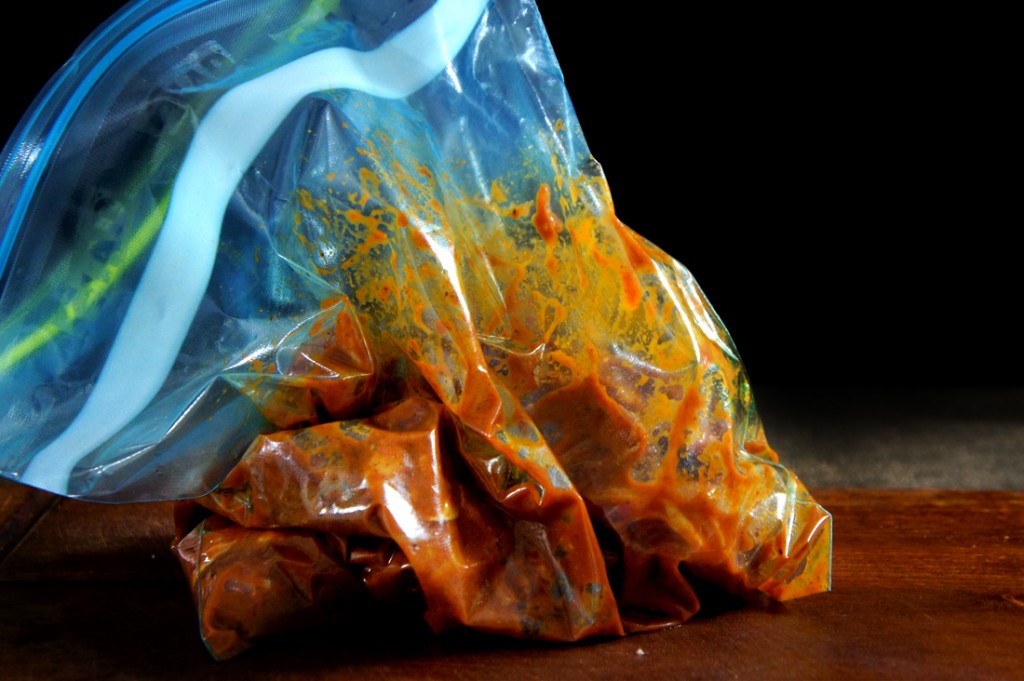 But please be so kind to remember that I am the victim of a brutal relocation, and the next-best-thing is my own most vigorously crafted replica based on the bits-and-pieces of information gathered and intels leaked by informants within its cult followers.  Of course I am not the only blogger who has beat this drum.  There are many sites out there claiming a Kogi taco recipe and I’ve read a good number of them which leads me to say: I thank you for all the references, but I believe none of them actually did it for me.  First for some, it’s a stretch to name something a replica if the product doesn’t even look remotely like its original.  Second, many over-simplified and didn’t seemed to have listened closely and carefully to the gospel from the cult leader himself, Roy Choi.  Listen… I heard… “thirty-something ingredients in the marinate”… “pear and kiwi”… “sweet and savory”… the online scripture reads “cilantro-lime relish”, “soy-chili vinaigrette”, “salsa roja”… plus the temple itself takes on the form of flat griddle where meat sizzles and caramelizes in its own fat. 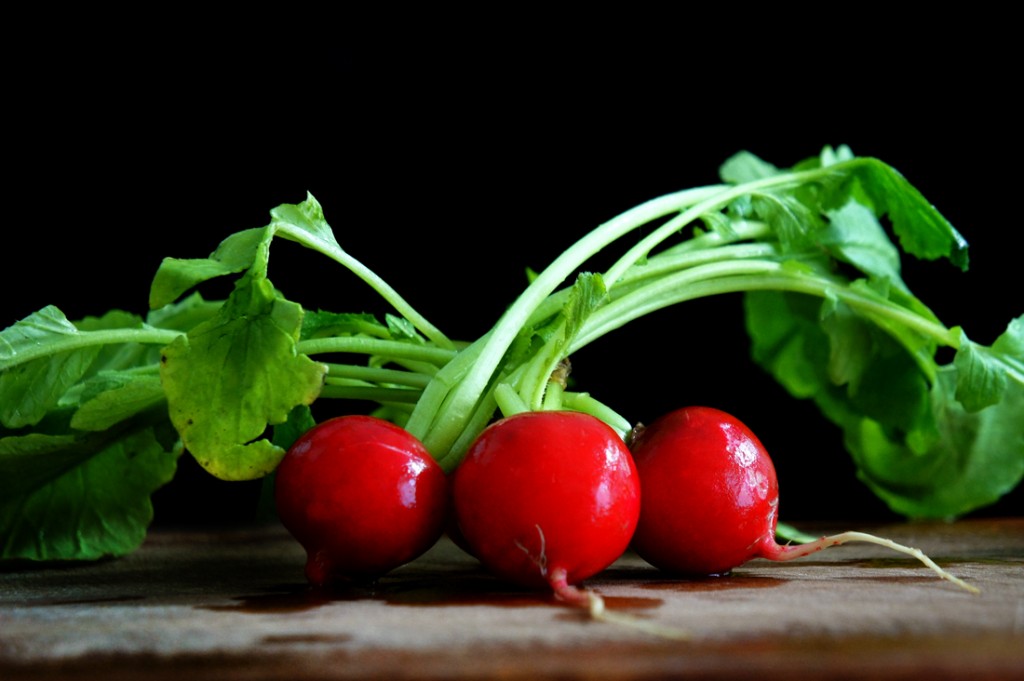 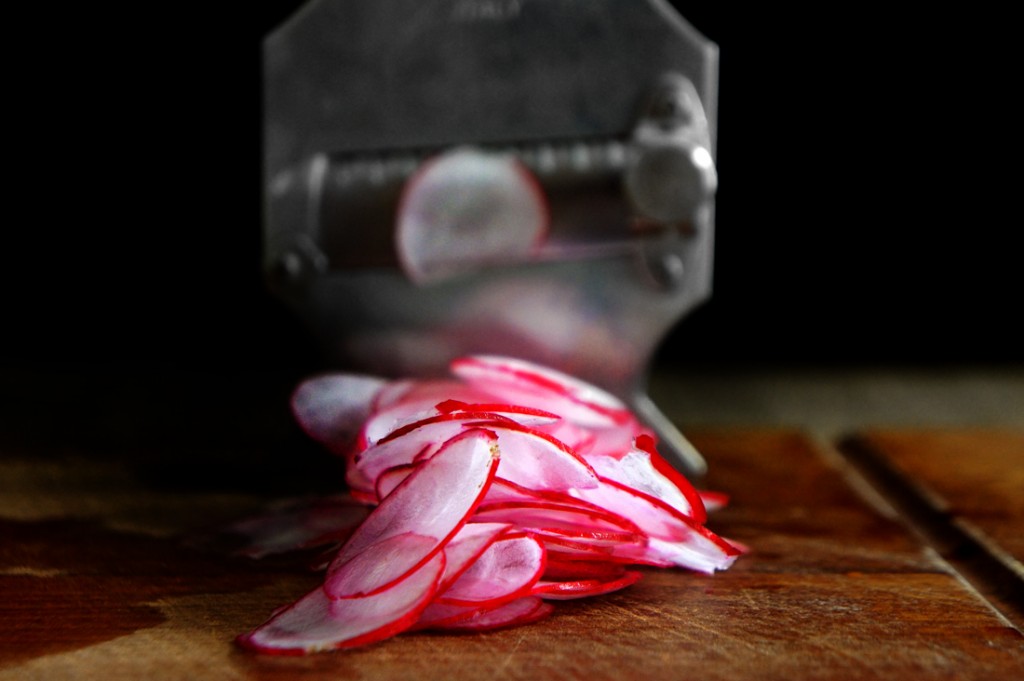 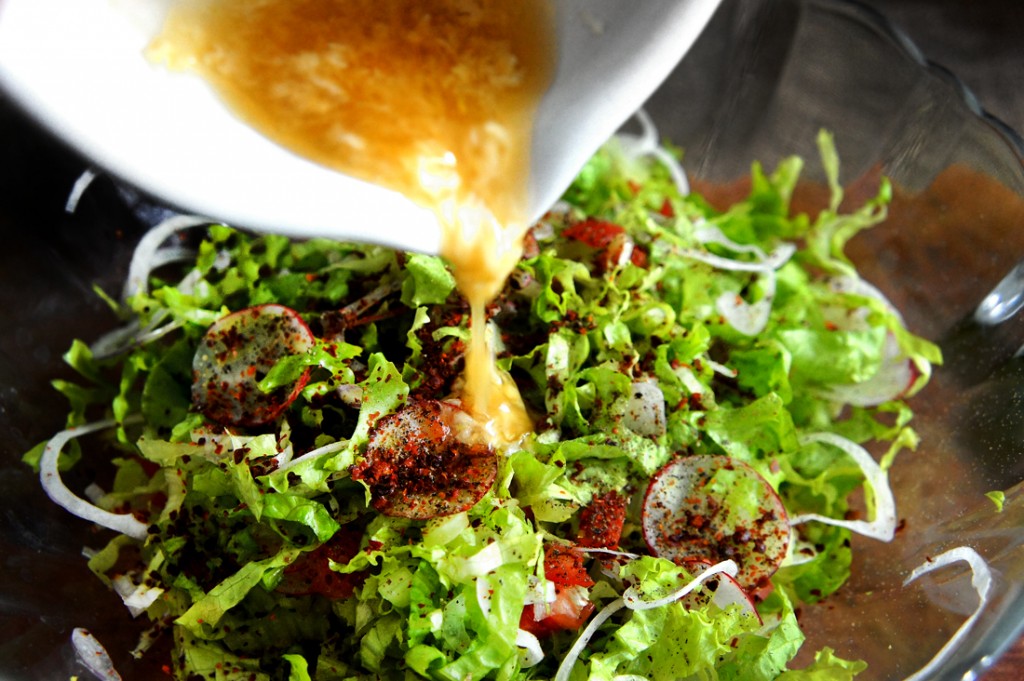 Of course I have MORE respect for the legend to insultingly say that my replica is the same.  It is only my imagination after all.  I streamlined the recipe to “only” 17 ingredients in the marinate because to make it easier for you guys. I have also tweaked the condiments to adapt to my liking.  For one, I CANNOT stand cilantro ESPECIALLY raw, so I scrapped the cilantro and moved the lime in “cilantro-lime relish” to the salad.  I’ve also moved the Korean chili paste – gochujang – from the salad dressing to the marinate because the slight sweetness in the paste can caramelize nicely and deepen in flavor, plus it also gives the meat a beautiful red sheen.  And it would save you some time to substitute the chili salsa roja with an Asian garlic-based, bottled chili sauce which I think is plenty.  I believe this is an adequate home-made version without compromising too much on flavors.

Did I over-promise on something I’ve NEVER tasted…?  Now I’ve made myself nervous…  Try it and let me know if all you LA-dwellers agree. 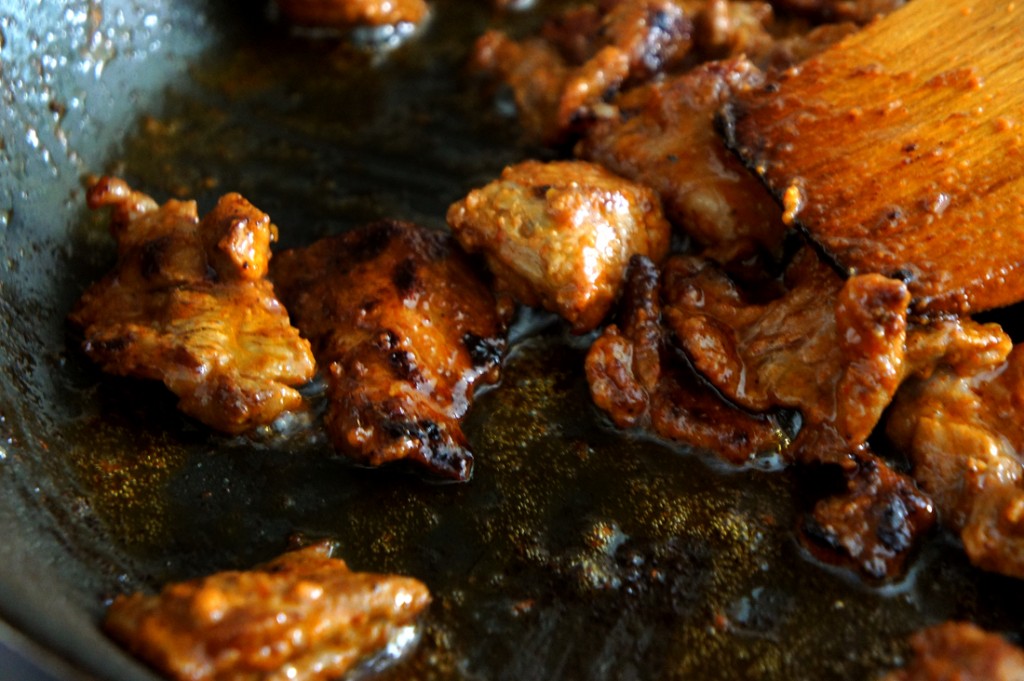 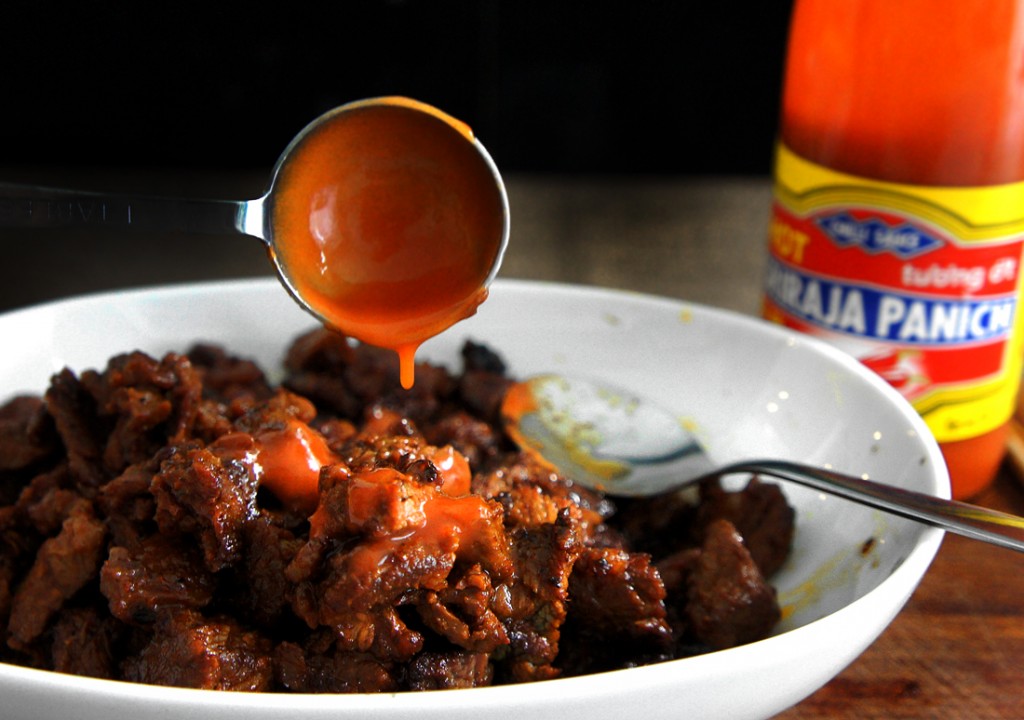 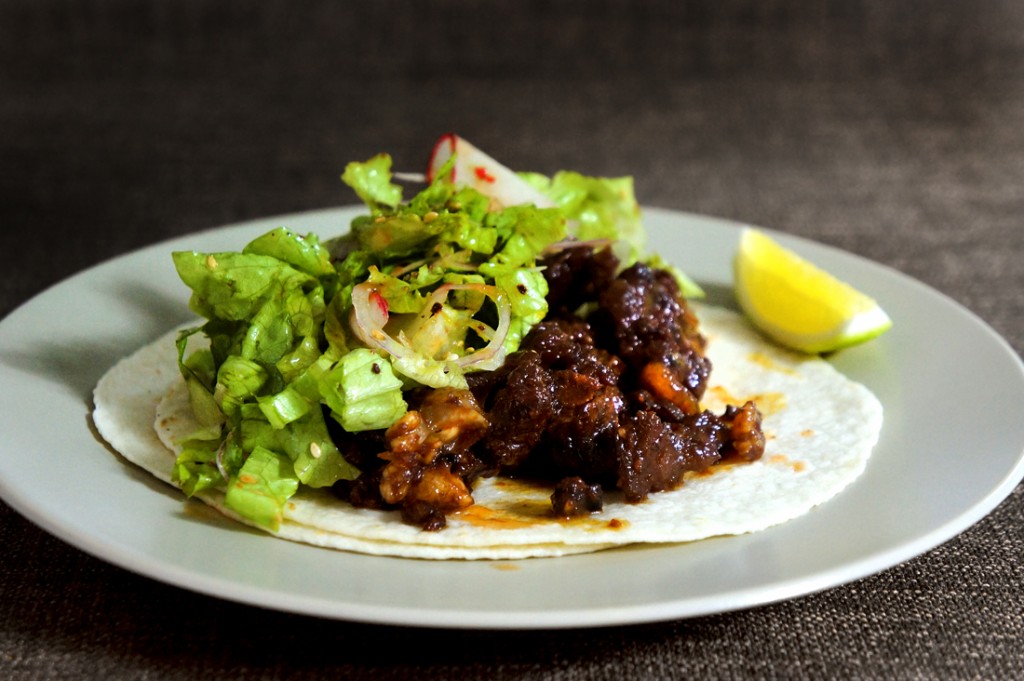 Cut the short ribs into bite-size pieces but in VERY IRREGULAR shapes, meaning pieces bigger or smaller than the others with pointy edges and deep scores.  What this does is it will create different degrees of textures and points of deep caramelization during cooking.  Place in a large zip-lock bag and set aside.

Combine all the rest of the ingredients in marinate in a blender, EXCEPT FOR the siracha sauce.  Blend until very smooth.  Pour everything into the zip-lock bag and rub thoroughly to make sure every pieces of beef is in contact with the marinate.  Leave it in the fridge to marinate for at least overnight.

Before cooking the meat, prepare the salad and steam the tortilla.

Cut the romaine lettuce in thin slices.  Shave the baby radishes and shallots through a fine shaver (a truffle shaver is very handy for this job).  Cut the tomato in half and use your fingers to squeeze out the liquid and seeds, then dice finely.  Combine all of the above with chili flakes and toasted sesame in a big bowl.  Grate the garlic (microplane grater works well here) and combine it with lime zest, vinegar, sesame oil and a pinch of sea salt.  Set aside.  ONLY add the vinaigrette to the greens RIGHT BEFORE serving.

Put tortillas on a plate and cover with foil.  Steam in a steamer for 3 min to heat up.  Turn off the heat and keep them warm in the steamer.

Heat up a NON-STICK, flat and shallow pan over high heat.  The reason why it’s important that it’s non-stick is because we want the caramelization on the meat to STAY ON the meat, NOT sticking to the bottom of the pan which is great for pan sauce but… that’s not today.  Add 1 tbsp of oil and start pan-frying the meats, try NOT to include too much liquid from the marinate otherwise it would be hard to brown.  Cook the meat in 2~3 batches and do not over-crowd the pan.  Each pieces of meat should have at least 1/2″ (2cm) of space between each other.  Don’t move them too much because we want a good amount of browning on each pieces.  Cook until each and every piece of beef is nicely browned with dark caramelization on the tips.  Move them out of the pan with a slotted spoon and repeat with the 2nd batch.

Once all the meat is nicely browned and cooked, put all of it in a large bowl.  Use a scissor to roughly cut them up, then add 1 1/2 tbsp of siracha sauce and toss to combine.

Add the vinaigrette to the greens and toss evenly.  Lay 1 tortilla (or 2 as how the Kogi truck does it) on a plate, then top it with the short ribs and lots of salad.  Squeeze a bit of lime over the top and serve.  You could add the garlic chili sauce for more heat.

I’m pretty happy with it.  Hope they make you, too. 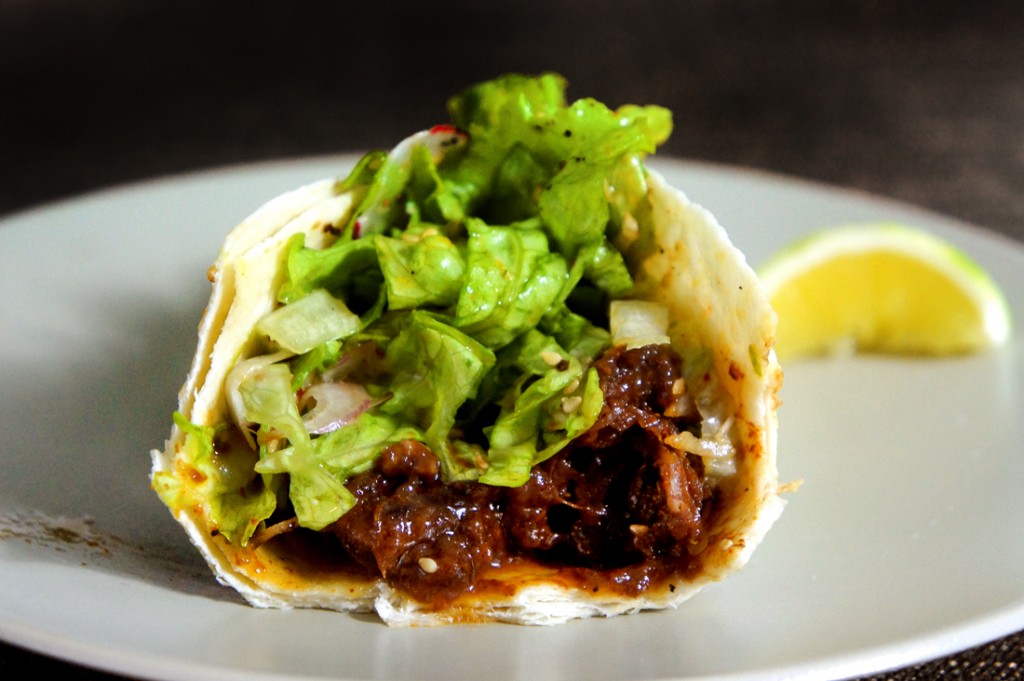