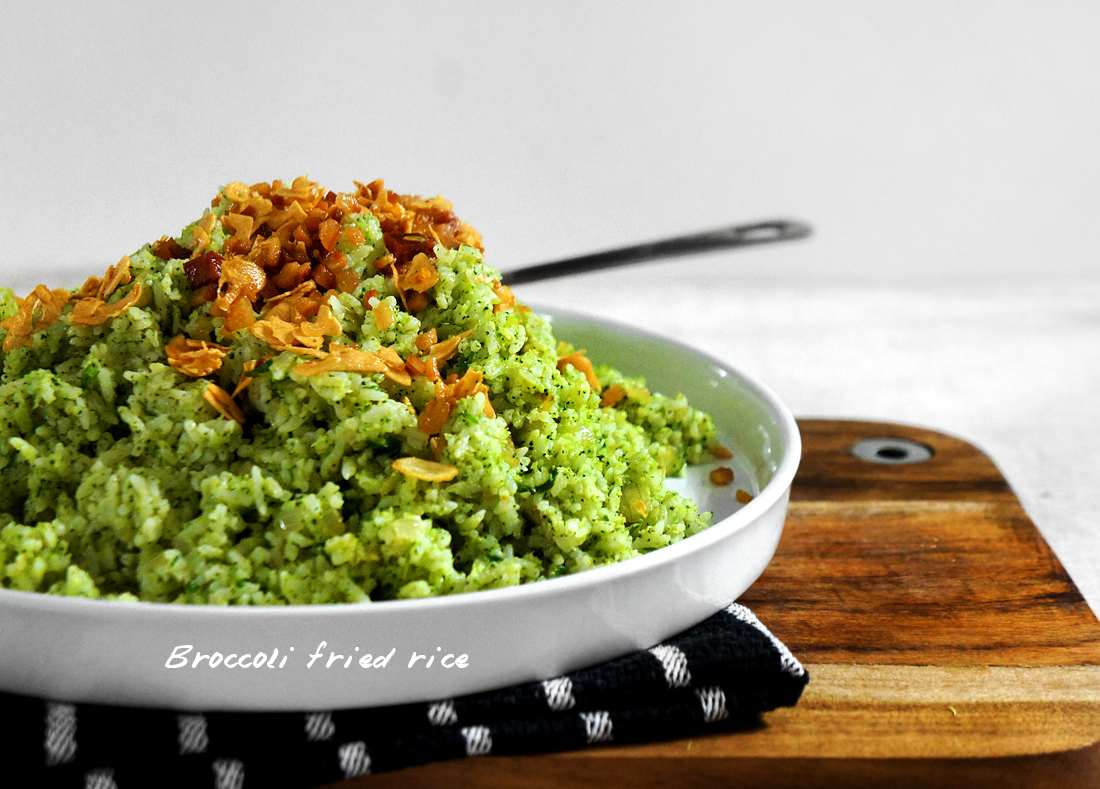 November 9, 2012 In All recipes, Noodle/Pasta/Rice, Vegatables 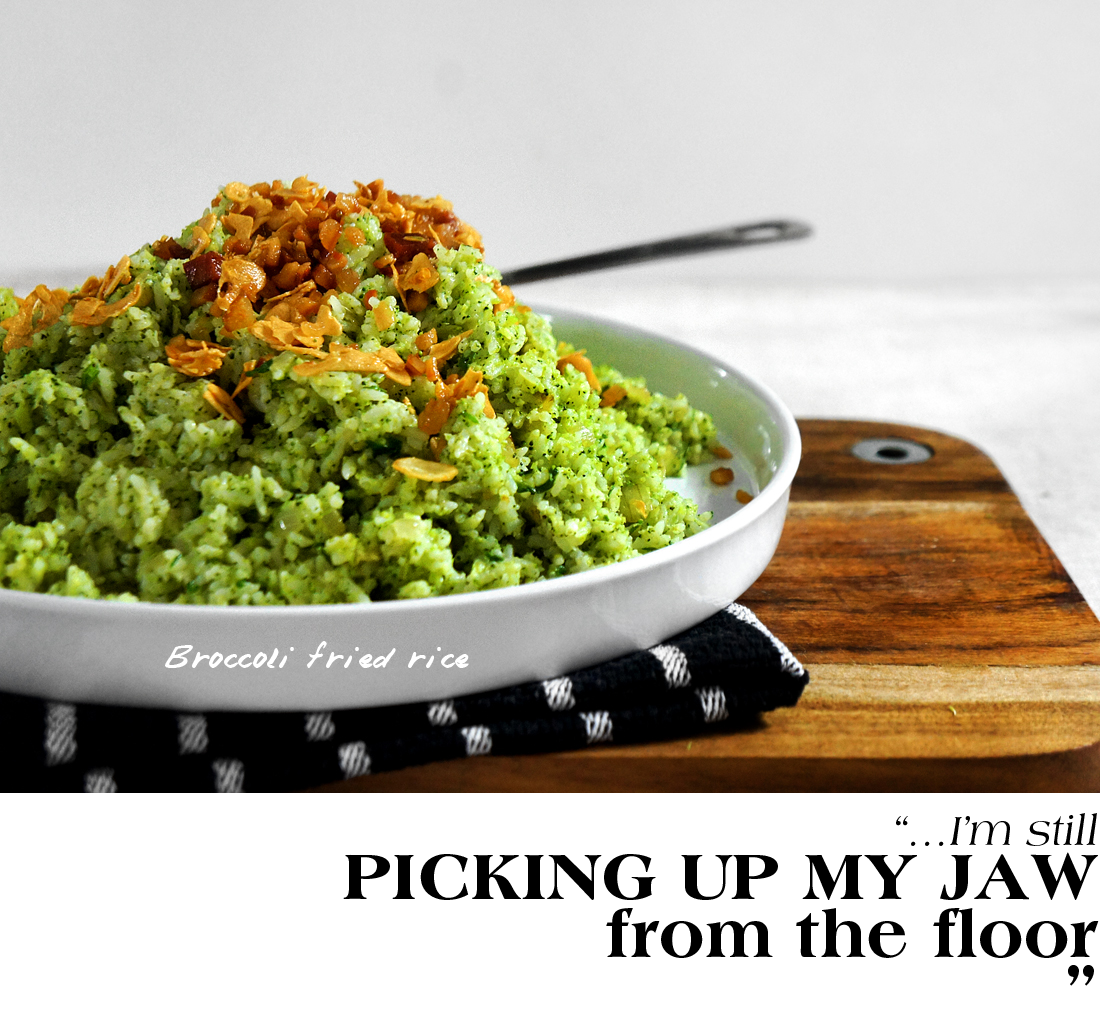 OMG… did anybody see Tony’s Rio episode?  WHAT the hell happened to…  OK, better and wiser human beings once said that if you got nothing nice to say, don’t say anything.  So I’m just going to subtly leave with – I’m post-traumatically frozen… ambushed then shocked and awed… still stumbling to pick up my jaw from the floor and maybe a few teeth… then thank Lordy that this episode was strategically aired AAAFTER his roast… and of course now totally understand why he had to leave the show because there’s a bigger crisis to attend to (I get it now, Tony).

Was that too much?  That’s all I’m gonna say… 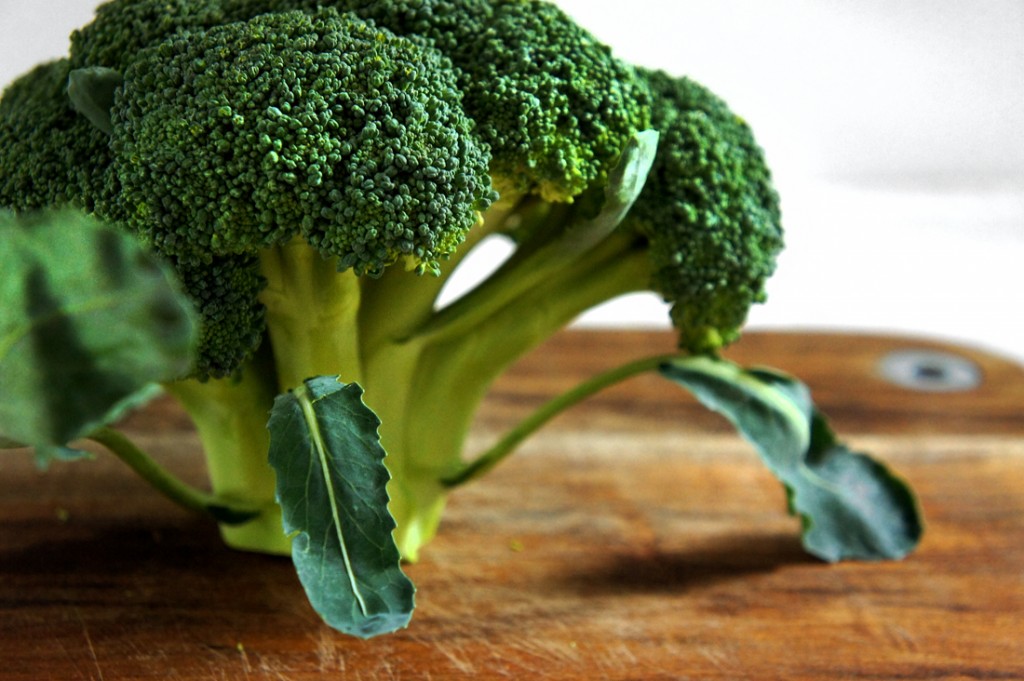 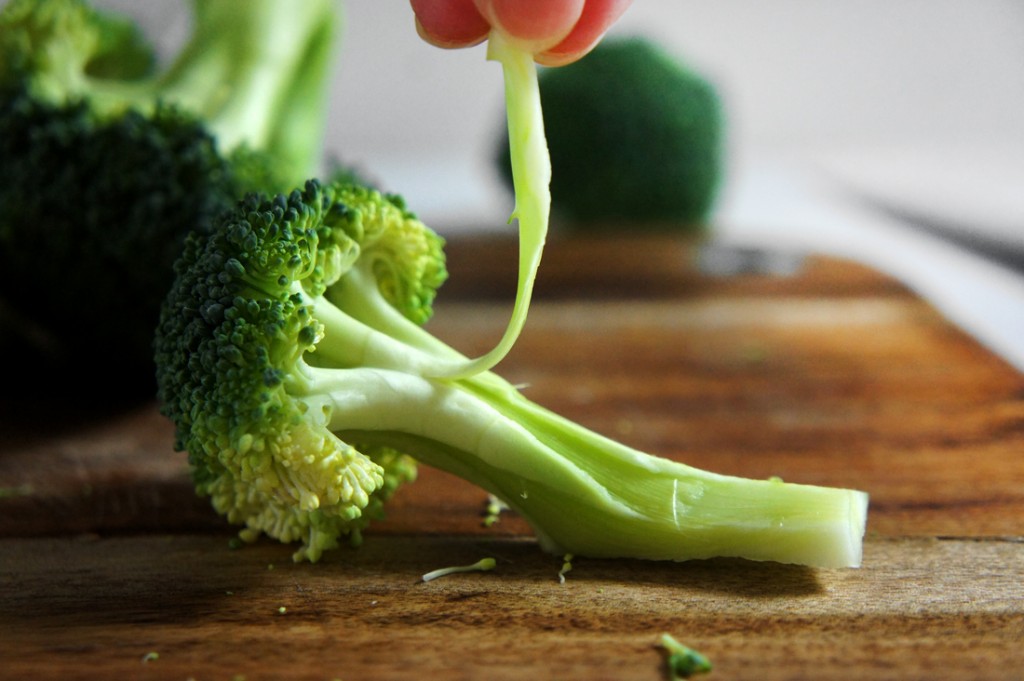 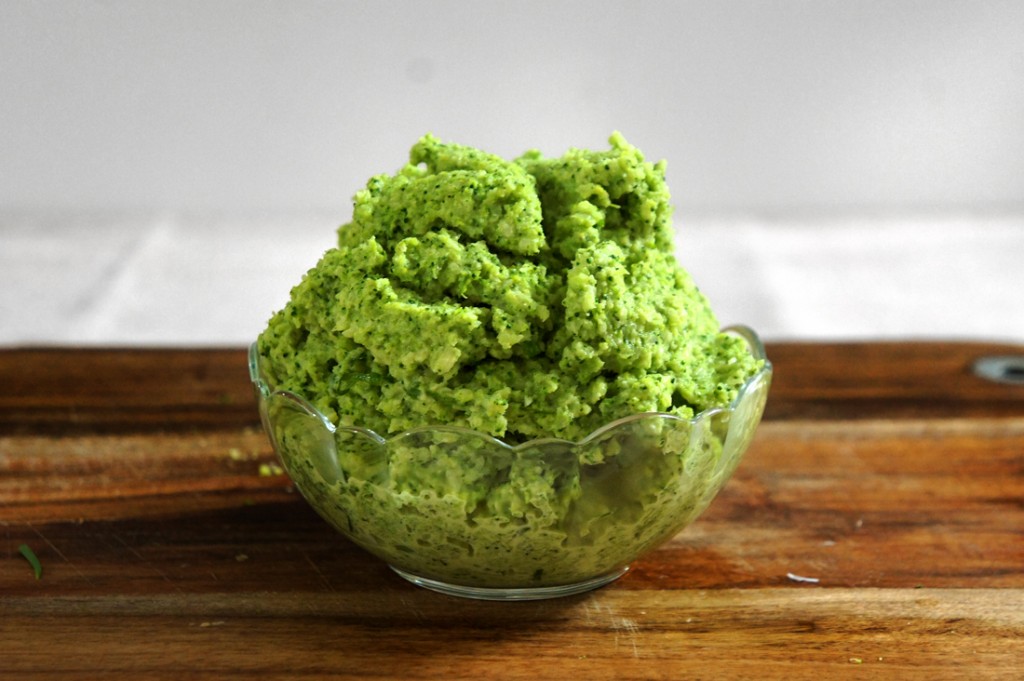 So I hope it’s understandable that amid all that shock wave, the better part of my mind was rendered blank by    insert your assumption here   , and thus very little of it was left to focus on what was actually eaten.  I recall something being some sort of pork-stuff set between 2 pieces of bread but so was in 99% of the other episodes.  And then a… green fried rice?  Rice fried with broccoli puree?  I hope I remembered that right because somehow powering through all my brain malfunction, that one stuck.  Perhaps it’s because I’m quite a sucker for fried rice, EVEN the bad ones.  And by bad ones I mean the ones sitting on the corner-deli buffet table for God-knows-how-long-and-please-don’t-tell-me, seasoned by a few spits of saliva and perhaps a few cat hairs.  Yeah even those (as long as I don’t think about what I just said…).  So I have to try this.  Even if I’ve never remotely had anything like it before, I need something else to remember from that episode other than    yeah, that    . 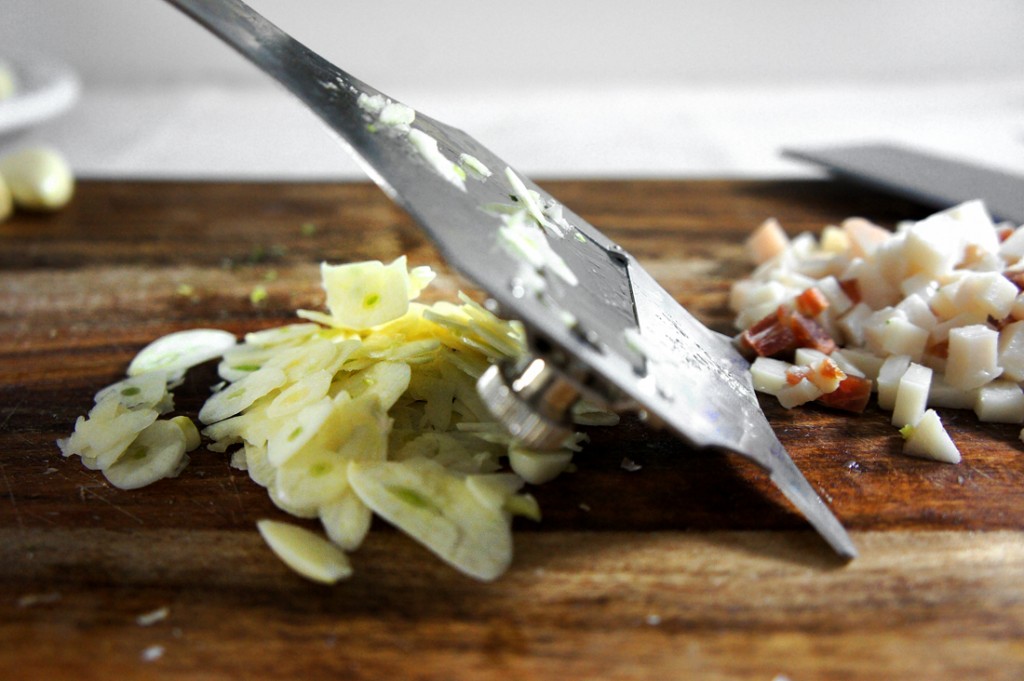 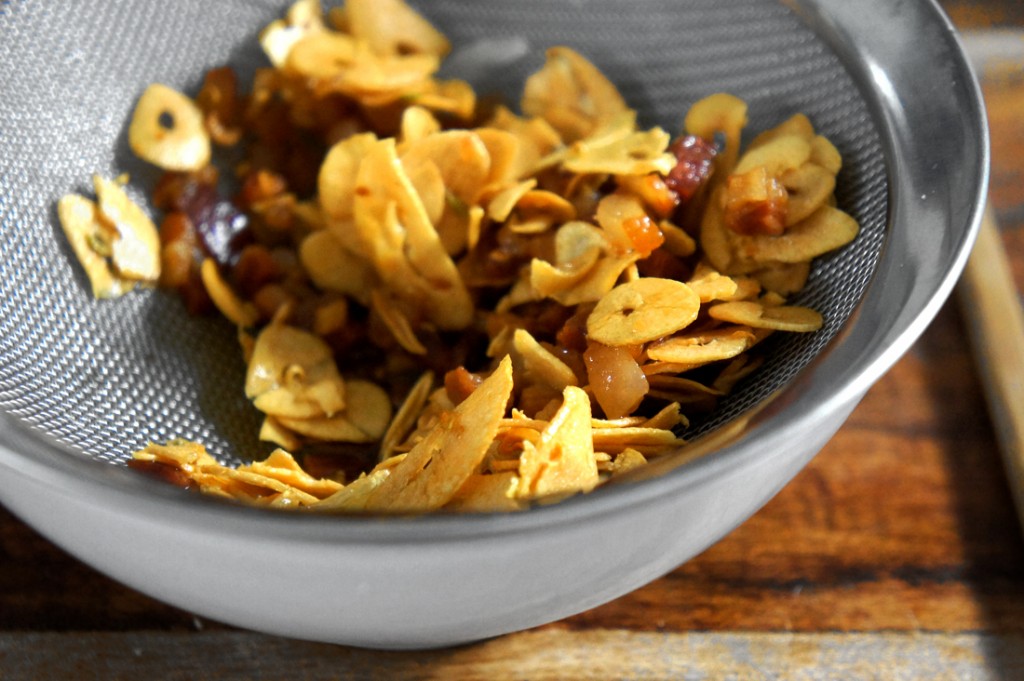 This is totally typical of me by the way, trying to recreate something that I’ve never even tasted before, which means it’s purely made up based on a name or an image.  There’s pro and con to this habit of mine.  First the con obviously being that it probably tastes NOTHING like its inspiration, but the pro being I would never know the difference anyways… (or is that a con as well…?).  So the minute I started thinking about broccoli fried rice besides the obvious of it being green, I knew that I want it to have a certain level of porky-ness and something salty and crunchy on top.  In this case they ended up being fried pancetta bits, and salted garlic crisps.  I wouldn’t say that the broccoli gave the fried rice a distinct flavor but it certainly is a brilliant way to hide your vegetables, and between the vibrant green, porky pancetta and aromatic garlic crisps, it at least took my judgmental mind off      beeeeeeeeeep     . 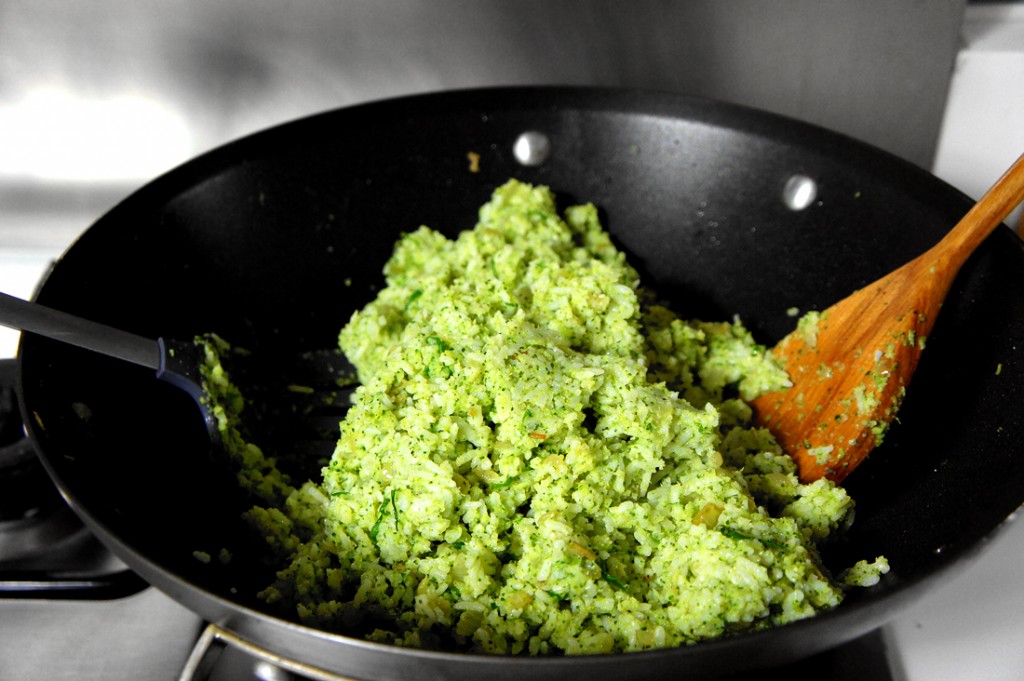 * In retrospect, I would suggest adding 2 tbsp of chopped spinach (use frozen but make sure it’s squeezed dry) to the broccoli puree for a deeper, richer color.

** And I doubled the amount of pancetta and garlic crisps in the recipe because I felt it wasn’t enough.

Wash, trim and cut the broccoli into small pieces.  Make sure the tough fiber on the stems is removed.  Place all the broccoli into a pot with 1/2 cup of water and put the lid on.  Cook and steam the broccoli on high heat until they are tender when a fork can be easily inserted, approx 5 min.  Shock the cooked broccoli in iced water and DRAIN them VERY WELL.  Puree the broccoli, garlic, salt, spinach and olive oil (or unsalted butter) together in a food processor.  Set aside.

In a large wok, brown the pancetta on medium heat  until they give out all their fat and nicely browned.  During which you could prepare the garlic.  Use the side of your knife to GENTLY pound on the garlic WITHOUT crushing them.  This would separate the skin from the garlic and make peeling much easier.  Then you could slice them by knife (if you have EXCELLENT knife skill), or do what I did which is slicing them through a truffle slicer (very useful piece of gadget in the kitchen).  The garlic slices need to be PAPER THIN.  When the pancetta’s ready, remove them from the wok with a slotted spoon leaving the fat in the wok.  Depending on how fatty the pancetta is, add more olive oil to the wok so you have at least 1/2 cup of oil.  TURN THE HEAT DOWN TO LOW, then add the sliced garlic.  Use a wooden spoon to separate the slices so they aren’t sticking to each other, then fry them in the oil until they become LIGHT BROWN in color.  This will take a few minutes.  Remove them with a slotted spoon and leave them with the browned pancetta.  Season with a pinch of salt and set aside.

Note: It’s important to fry the garlic using very LOW HEAT, otherwise the edges would burn and become bitter before they crisp up.  It’s also important to remove them from the heat when they are JUST LIGHT BROWN, because they will continue to darken a bit once removed.  Over-frying them would turn them from crispy and pungent to DARK AND BITTER in just a few seconds.

Leaving approx 5 tbsp of fat in the wok, turn the heat up to high.  Saute the diced onion with a pinch of salt until soft and translucent.  Add the broccoli puree and rice, and stir-fry until everything’s well combined.  I did this with TWO spatulas to make the task easier.  Taste it and re-season it with salt and white pepper.

Top it with the pancetta and salty garlic crisps and serve.

Did anyone ever tell you that cold fried rice is also something kind of wonderful? 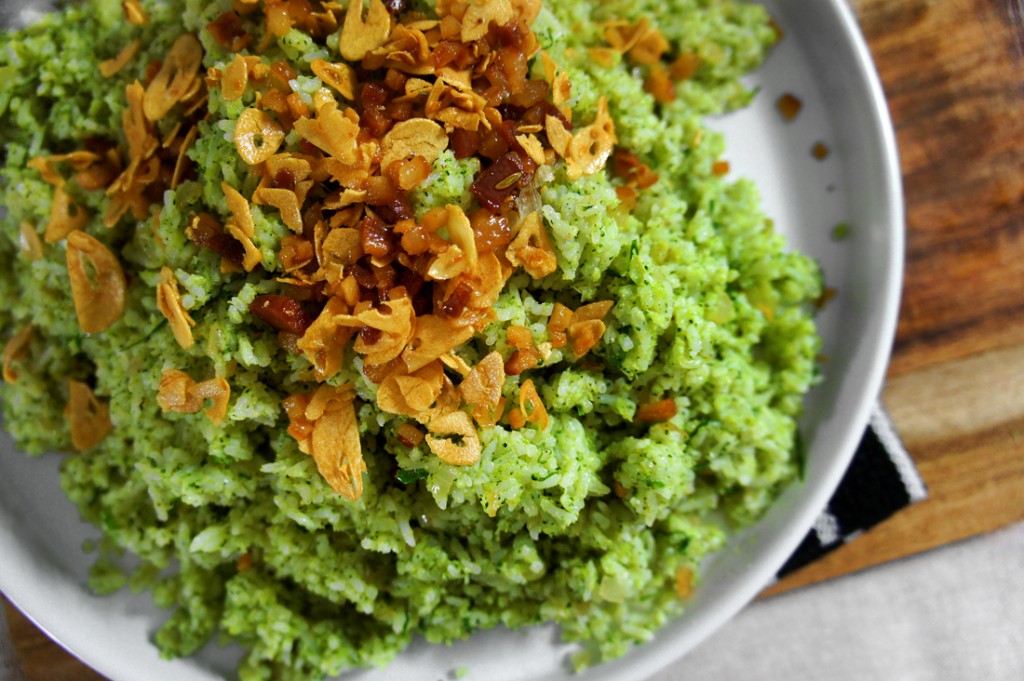