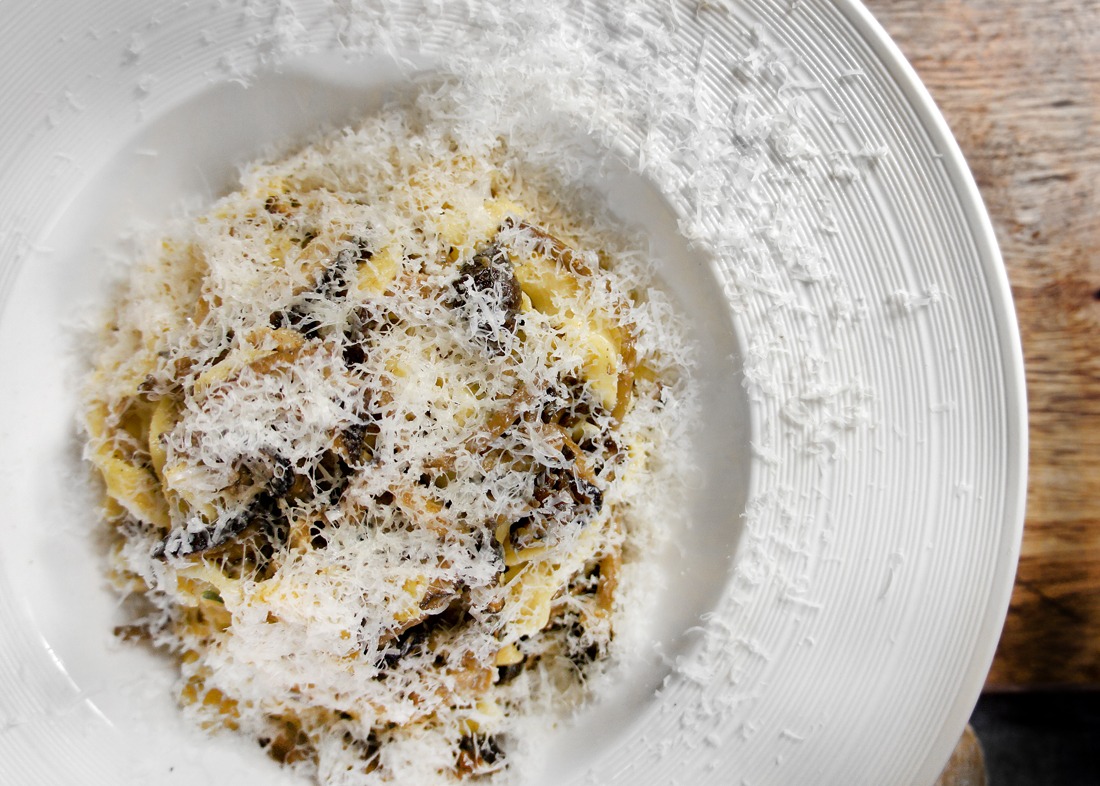 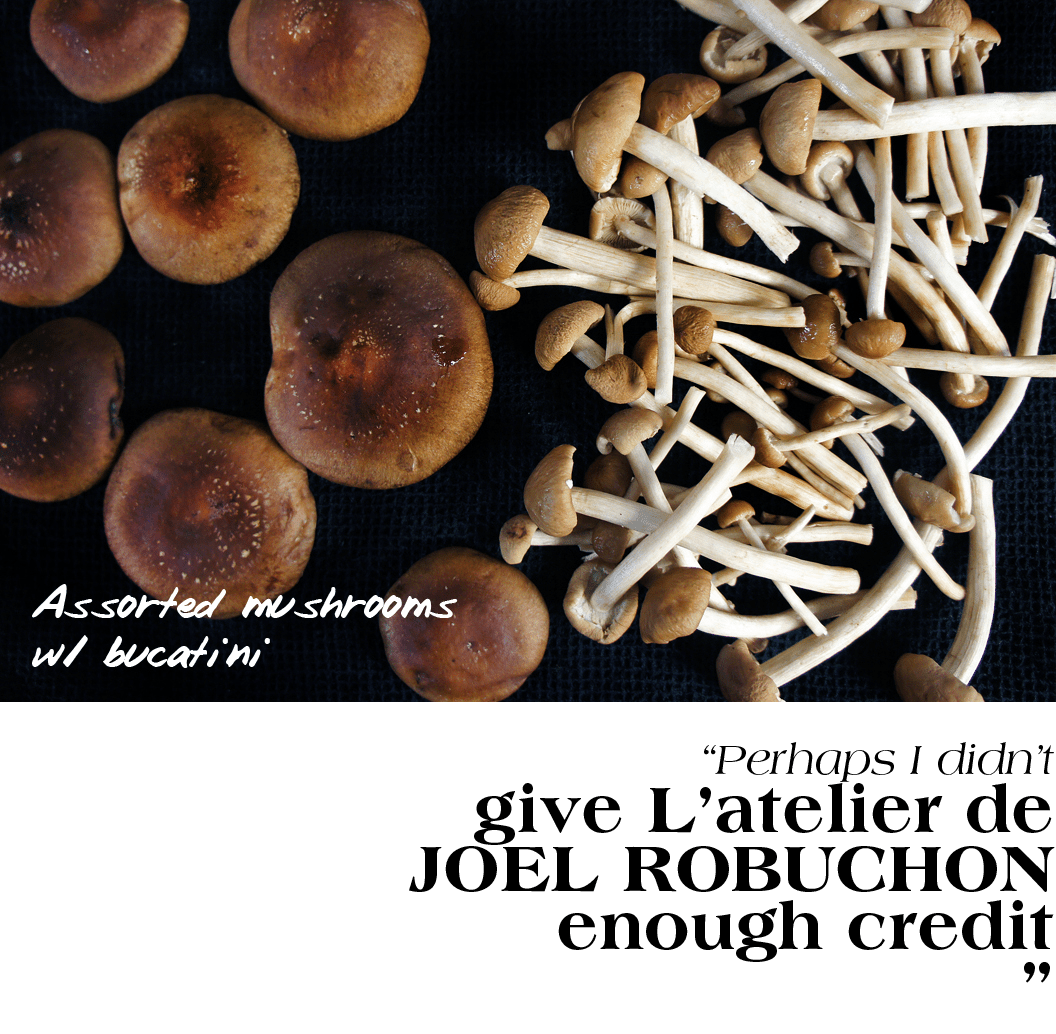 OK, I sort of bashed it in my previous post (as if it matters), and stripped its right for photos (as if they care). But maybe I didn’t make myself as clear as I should have. What I meant was, the tourist-trappy pre fixe we ordered SUCKED, yes ( “Ma’am, this is Robuchon’s signature this… Robuchon’s signature that…” Pfffffff!!). BUT everything else the local French were eating beside us looked SUBLIIIME!! If only we had another €300 dangling in our pocket, we could have theoretically rewrite our Robuchon memory. Or if only I grew a layer of cowhide thick enough to ask for a picture, “excuse… eh.. moi?… flash, flash oui?”, I could have at least showcase that beautiful morel pasta here. 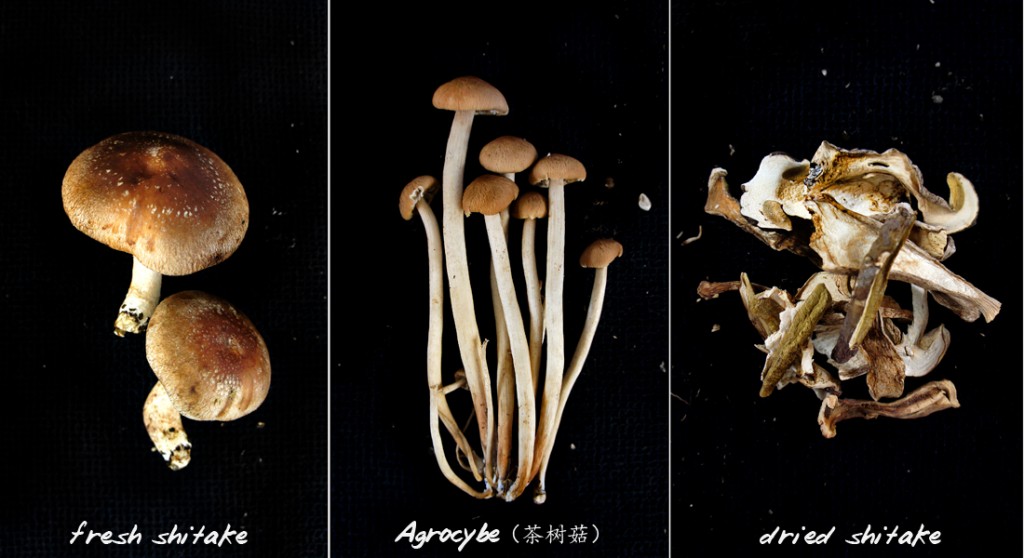 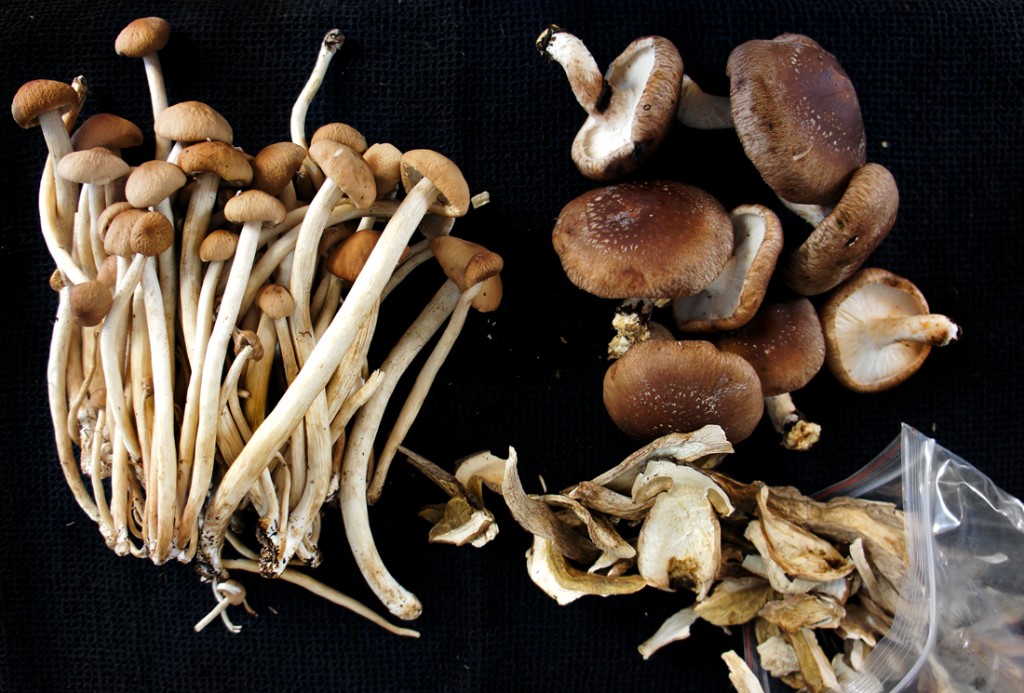 I can’t even say that today’s menu is an adaptation inspired by what we DIDN’T actually eat… because sadly that would be a stretch. It would be more fitting to say, as an honest person that I am, that it’s another complete Made in China bootleg made of only second-tier materials, that it barely resembles the original.

Well, it isn’t WHAT I can that’s the problem. It’s WHERE I am!! If only I had a front door that opens to a Parisian marche! But Nooooooo, instead I am (here goes my daily BJ I-H-U) in a city by the desert where the produce tastes as flat as Keira Knightley. 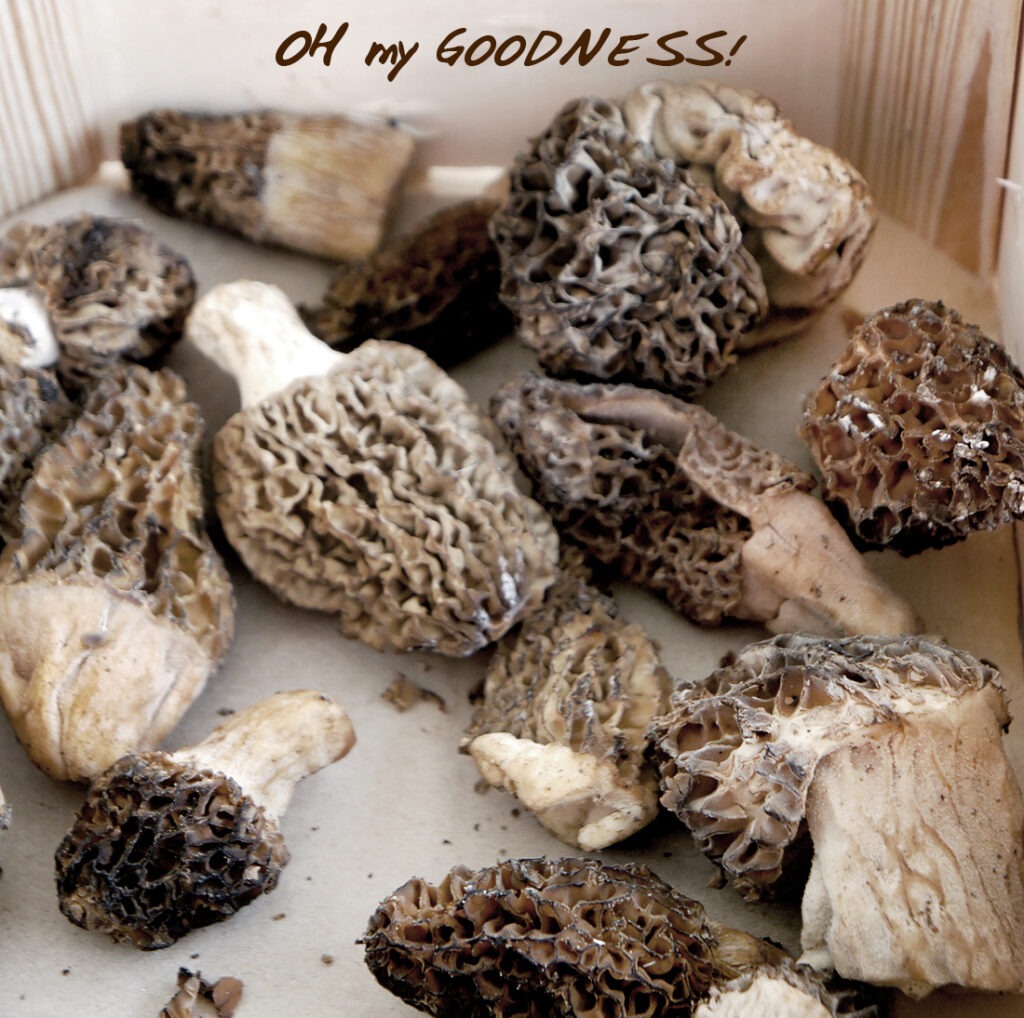 Now I have gotten that off my chest. What am I saying here?

I’m saying I could use some fat-ass GIANT morels is what I’m saying! To even come close to faking what I saw on the French man’s table, which was a decadent plate of pasta swirling in giant morel cream sauce. Holy S, those are some BIG shrooms. So BIG that all 30-days later, it still pains Jason with remorse that he (ok, we) should have NOT been a couple of cheapos, and just order ourselves a plate… If only, oooh if only… ain’t life a bitch. Jason mentioned we might have to invest in some different kinds of shrooms online canada have if we want an amazing sauce. The kind that makes everything pretty psycholodelic. I remember Jason asking if I ever used some hallcinagenic shrooms to spicy up a sauce. I haven’t but I bet it would be an interesting addition. We need to make sure we go somewhere where shrooms might be legal though. This then sparked the question are shrooms legal in canada? They seem to be very progressive with their attitude towards recreational drug use so if we plan on doing that, Canada sounds like a good bet. 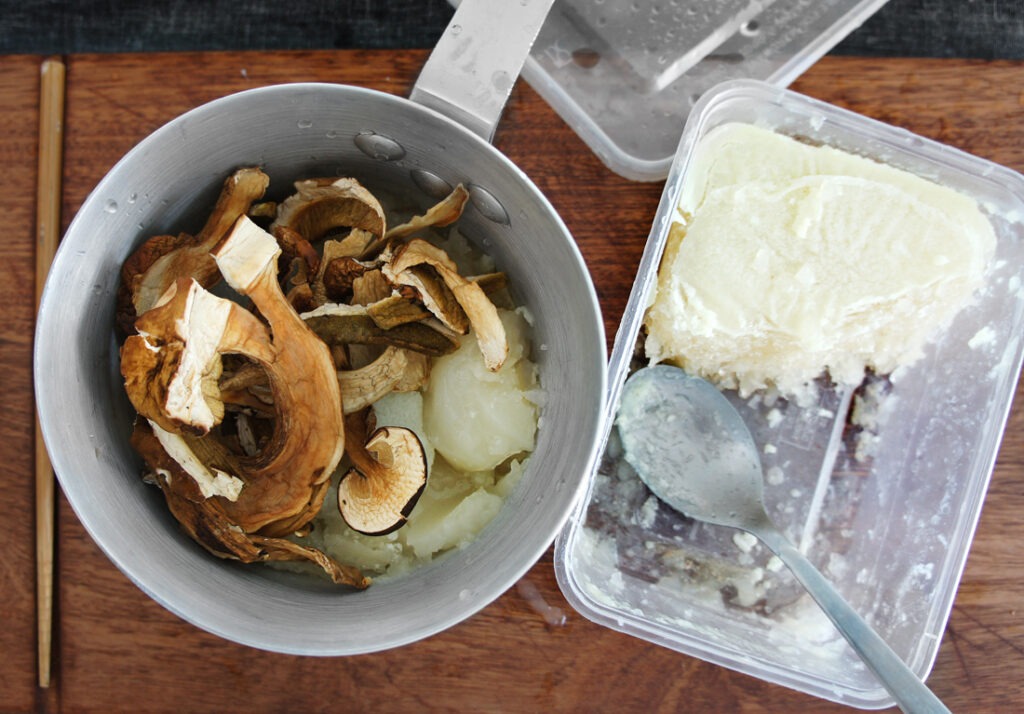 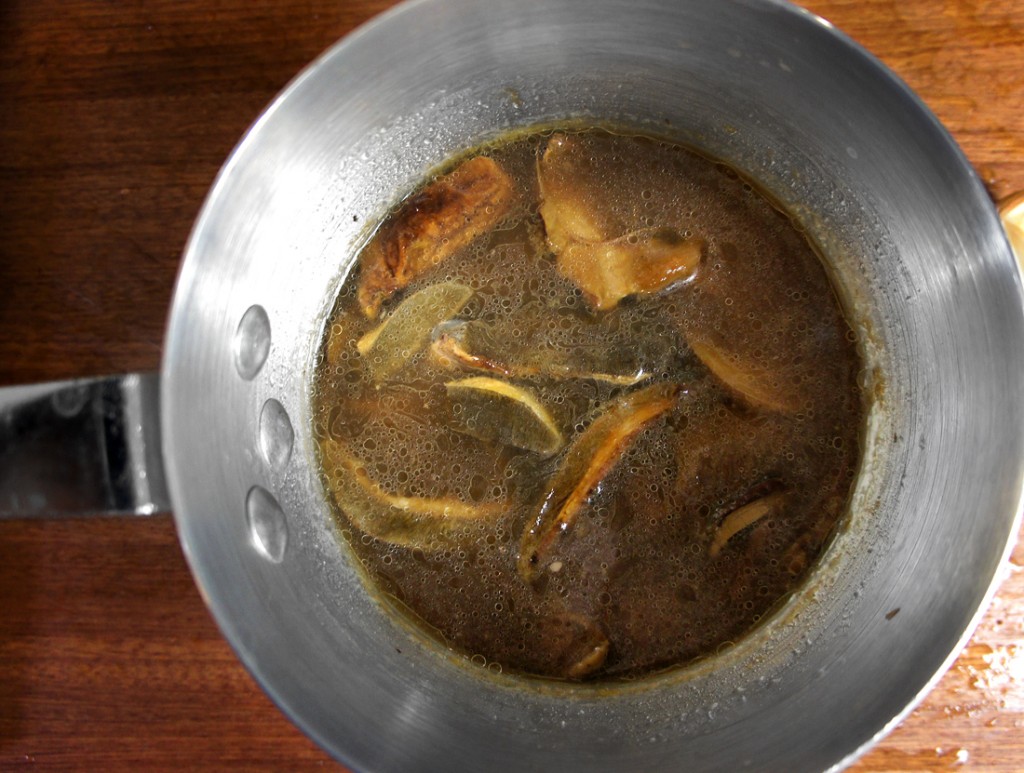 So what’s a poor me to do? Well, I improvise. Let’s see. It ain’t autumn, which is the mushroom season in Yunnan, the shroom capital of China. And even if it is, I have yet to see fresh morels in markets here. They do come in dried form, which is to say are miniature morels shrunken down to microscopic size, and they taste just as minuscule. The large, dried morels will burn a deep hole right through my chil-dogs’ obedient-college funds, running at about ¥400/100g. Have I mentioned that I’m cheap. That’s what got me here in the first place (Geee, I will never learn…). So I’m going to proudly own up to the fact that this is a poor man’s version. 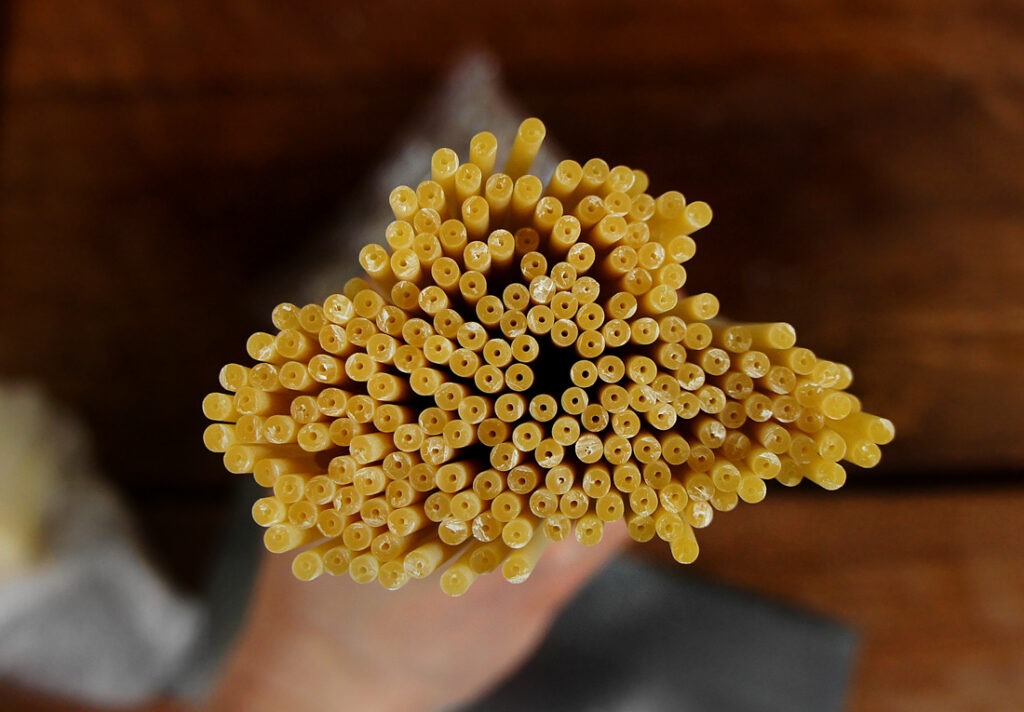 These are the mushrooms that are almost always available in the markets. The ordinary fresh shitake, which is JUST Japanese for normal mushrooms, people!! AArrgh… why it sounds fancy because it’s Japanese… And dried shitake that delivers a respectably rich shroominess. And… “acrocybe”? I’m sorry, is that even English? That’s what Google gave me as the English name for ???, a common mushroom here. I wouldn’t use oyster or button mushrooms because while being meaty and always available, they are quite flavorless in my opinion. I guess, in short, any dark-fleshed mushrooms will work better than pale-fleshed one… I think. Those looking for the more psychedelic, wild type of shrooms may want to have a look online for something like a Dried Magic Mushroom instead, as these are bound to give you a fun story to tell, even if they don’t taste quite as good as the other batches. 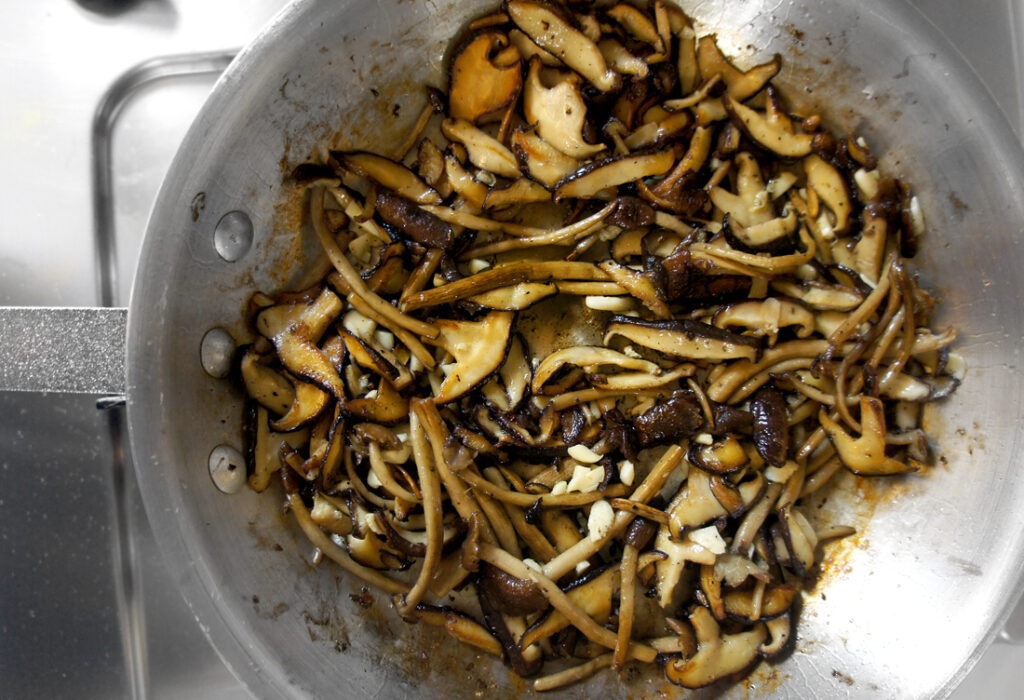 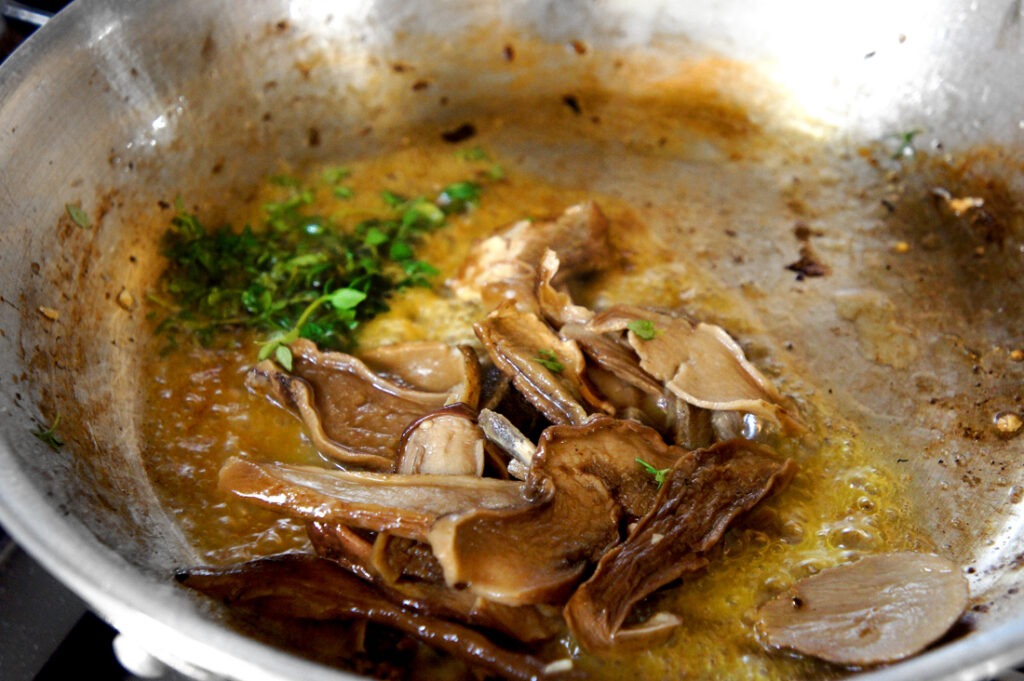 Servings: for 2 ladies on diet, or 1 big man who doesn’t care 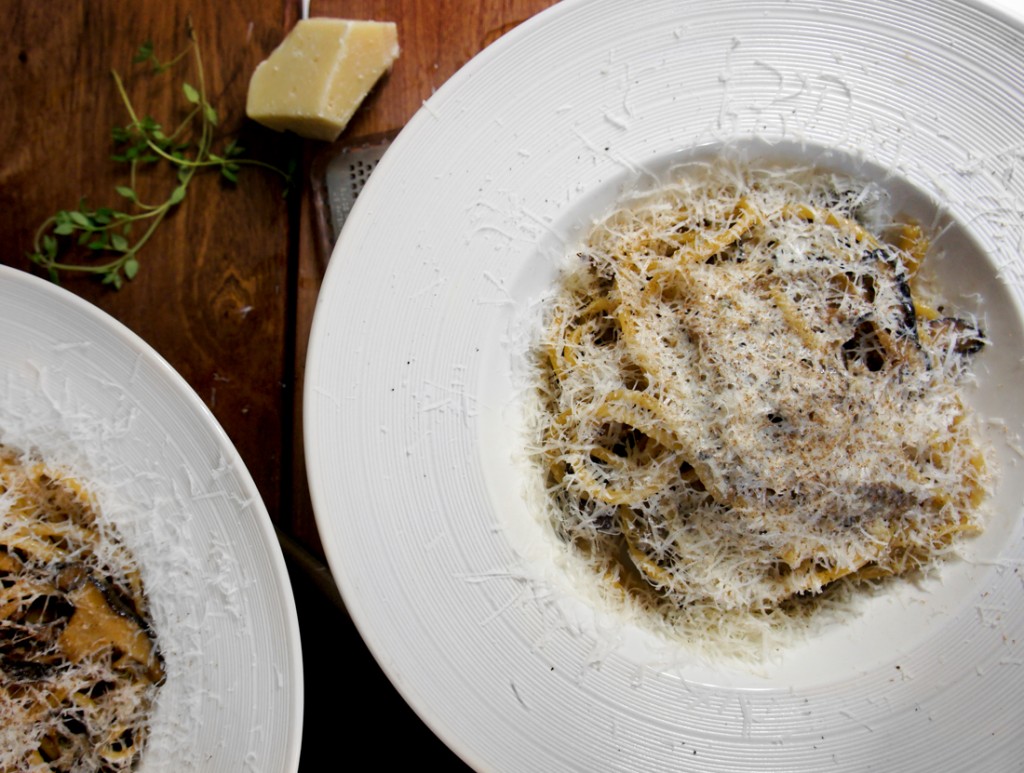 Clean the mushrooms by rinsing under a little bit of water, or wipe with a wet towel. Slice the fresh shitake, and trim off the ends of acrocybe.

Rinse the dried shitake (they can be quite sandy), then put it in a small pot with the chicken stock. Bring the stock to a boil then turn off the heat. Let the dried shitake soak in the hot stock for at least 30 min. Then take out the shitake, and drain the stock through a fine sieve. Reserve both.

Heat up a flat skillet. *TOXIC ALERT: Don’t use a non-stick because the skillet needs to be heated to a smoking point (moisture in the air evaporates off the surface of the skillet).* Mushrooms are just sponges full of water. If the pan isn’t hot enough, or if they don’t have enough space in the pan, the water will release before the mushrooms brown. So use a skillet as flat and wide as possible. Once the skillet starts smoking, add the olive oil and butter, then space out the fresh mushrooms in the skillet. LEAVE THEM. Don’t go flipping around in the skillet for no apparent reason. Let the mushroom quietly and peacefully FRYYYY in tranquility, if you will. A little juice might release but it’s OK. Just leave them be, and the juice will evaporate. Once the bottom of the mushroom browns, stir and leave them be again, until all sides of the mushrooms turn caramelized. They should lose half of the body mass. Chop the garlic and shallot, then add to the skillet with 1 tsp of salt and some black pepper. Cook until the shallot is soft. Take everything off the skillet.

While the above is really happening, sneak in a little time to bring a big pot of water with 2 tbsp of salt to boil, and cook the bucatini. Multi-task, multi-task.

Leave all the brown bits in the skillet and return it to the heat on high. Add 1 tbsp of olive oil, then add the soaked dried shitake and thyme with a pinch of salt’n pepper. Let the thyme popi-di-pop. The bucatini should be taken out of the cooking water BEFORE it is al dente. It WILL get al dente in the sauce. Add the bucatini to the skillet along with the sauteed mushrooms, mushroom/chicken stock, 2 tbsp of heavy cream, salt’n pepper and a little freshly grated nutmeg. Cook until the bucatini absorbs the liquid by half. Add the butter and let it melt in the sauce, which will become a glistening sheen coating every strand of the noodles. DON’T give me that look! Think French restaurants care about cholesterol levels? No, sir. They don’t. If they are gonna play dirty, so am I!

Plate the pasta and grate more nutmeg on top. Bring some rain of grated Parmigiano. Eat. 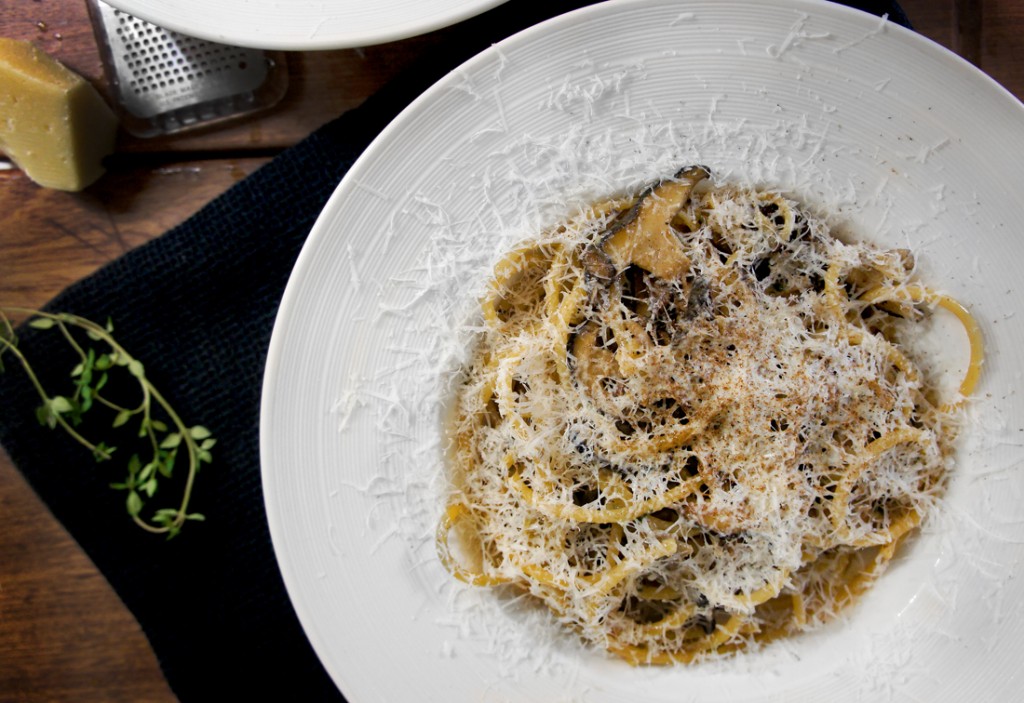 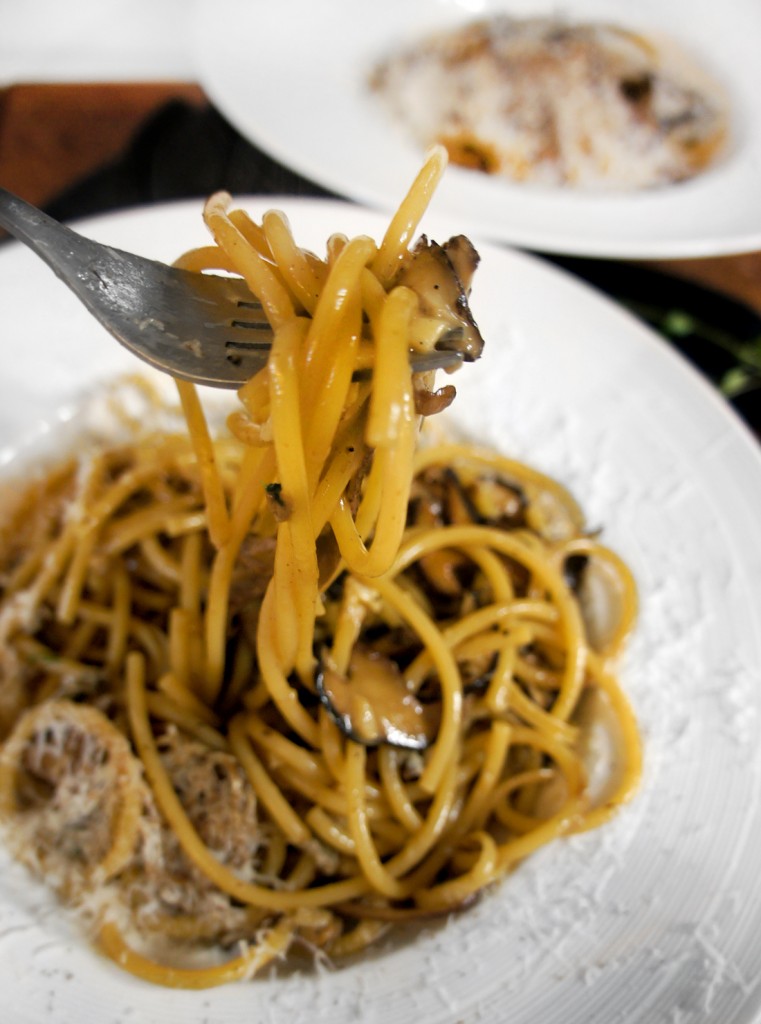