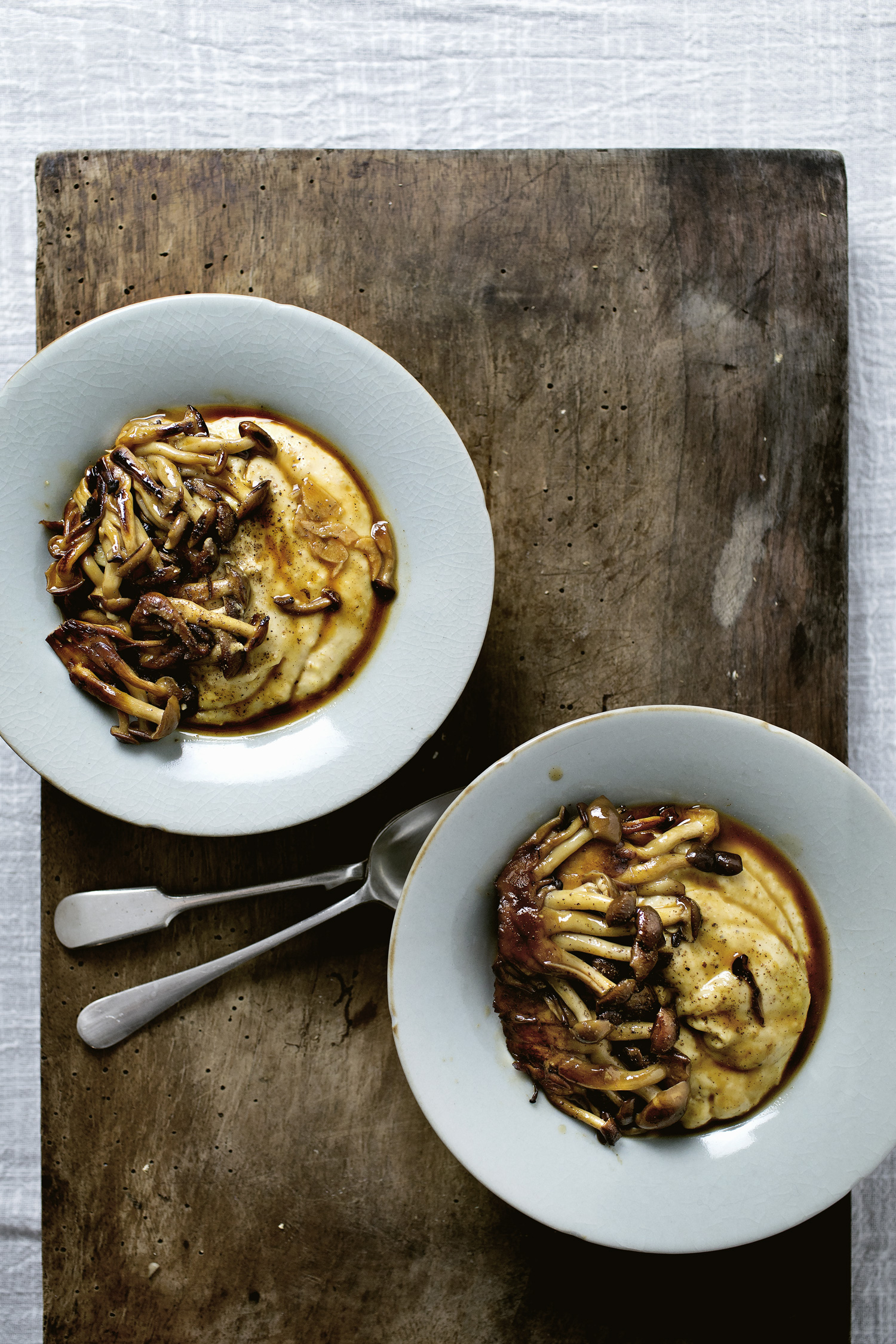 Yellow bowl from Dishes Only. 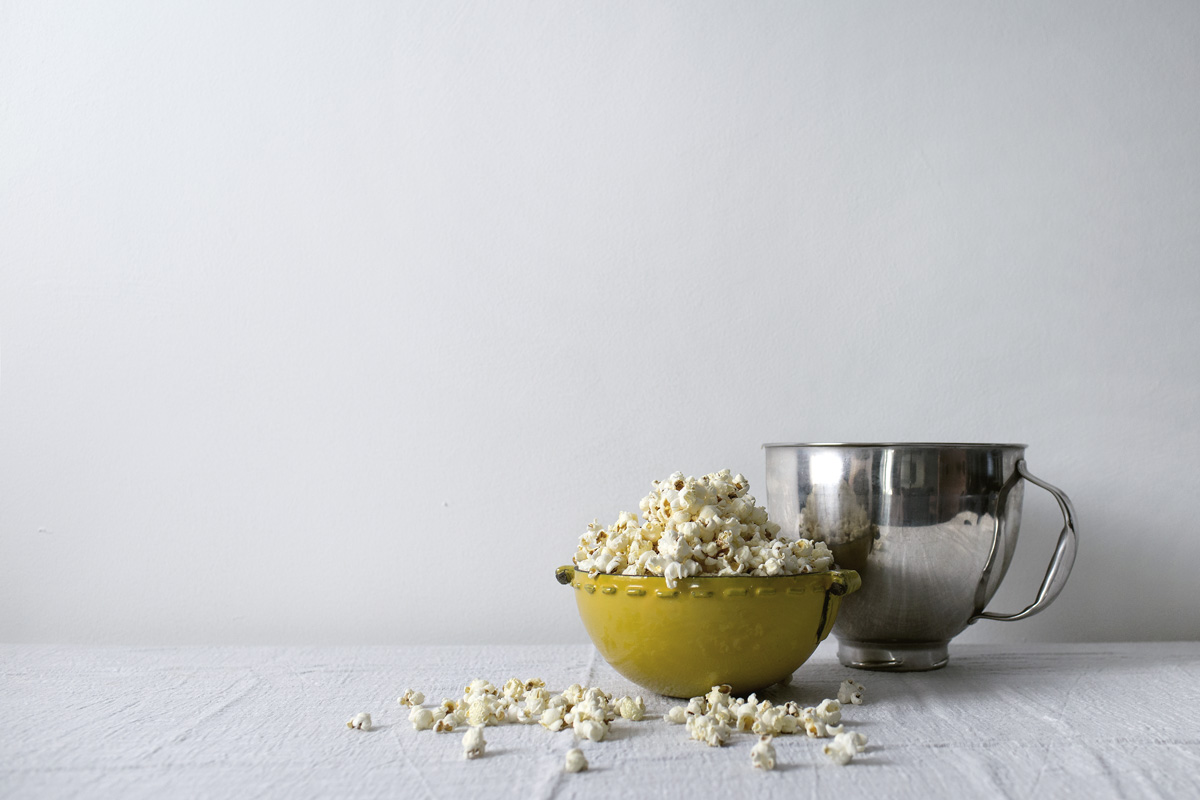 WE ARE GONNA TURN POPCORN INTO GRITS

One sleepless night in Hong kong, I sat in darkness as my face was dimly illuminated with fascinations and lights extruding from an iPad, where David Chang and Daniel Patterson were performing the magic of turning popcorns into polenta.  Popcorns.  This lowly snack that nobody deems worthy as anything but an afterthought on movie nights, or an amusement as we watch them being tumbled in disgusting, clownish rainbow food-dyes, in their hands, became this creamy and velvety substance.  That moment, I suddenly became interested in the word polenta again.

I tried cooking real polenta before… once.

It was somewhere back in the early 2000’s when I was still a collagen-filled college student, merely trying to feed myself at the end of the month by counting coins left from a careless visit to the Urban Outfitters.  Had I, a barely seasoned juvenile cook, any business making this hopelessly romantic Italian staple with slogans like “stir till death do us apart”?  No, absolutely no.  But clearly, no one had the heart to tell me.  I remember standing by the stove for what must’ve felt like an eternity, blood sweat and tears, tending a pot of lava-like substance that constantly spat out skin-meltingly hot sputters onto every surfaces that hurt, and yet somehow, still tasted like a flavorless goo with crunchy, uncooked bits.

It’s been like… I don’t know, 15 years?  I’ve never tried again since.  Actually, I forgot about polenta all together.  Bad word.  Very bad word.

Or more accurately, the show The Mind of a Chef arrived on PBS which was featured on Netflix which had just recently become available in Hong Kong.

I can’t quite remember the specific episode, but it was Season One somewhere, featuring David Chang with guest chef, Daniel Patterson.  And the second they proclaimed, “We are gonna turn popcorns into grits” (not the exact quote)(and call it grits if you want but I’m calling mine polenta because it’s very yellow), I knew it was going to be very cool.  Of course, being a respectably fancy chef, Daniel had to demonstrate achieving this goal through extra laboring steps just to prove his self-worth (like… God-knows-how-many small batches of popcorns, separately, being poached then pushed through a ricer and then strained again…).  And leaving me, this lowly reputable home-cook with very little self-respect, to wonder why on earth couldn’t I cheat in like 4 steps?

Turned out, it can be.

Have your popcorns.  Blend them with liquid.  Strain.  Heat and season.

Without any stirring or sputters, I had creamy polenta with an extra nutty flavor from the popcorns in under 15 min.  Given that the texture may be less “pearly” compared to if I did it in 20 steps, but as a shortcut that served no other noble purposes but to make myself happy, I could gladly forgo the esthetic imperfections.  Especially, did I mention, that it was armed with melted cheddar cheese, and topped with deeply caramelized mushrooms with a dark pan-sauce made from garlics, fresh thymes, wine, chicken stock and a good dousing of tabasco sauce…  This gooey, buttery, savory, slightly spicy and tangy bed of comfort made an October Tuesday night really happy.

Who says that popcorns can’t be dinner? 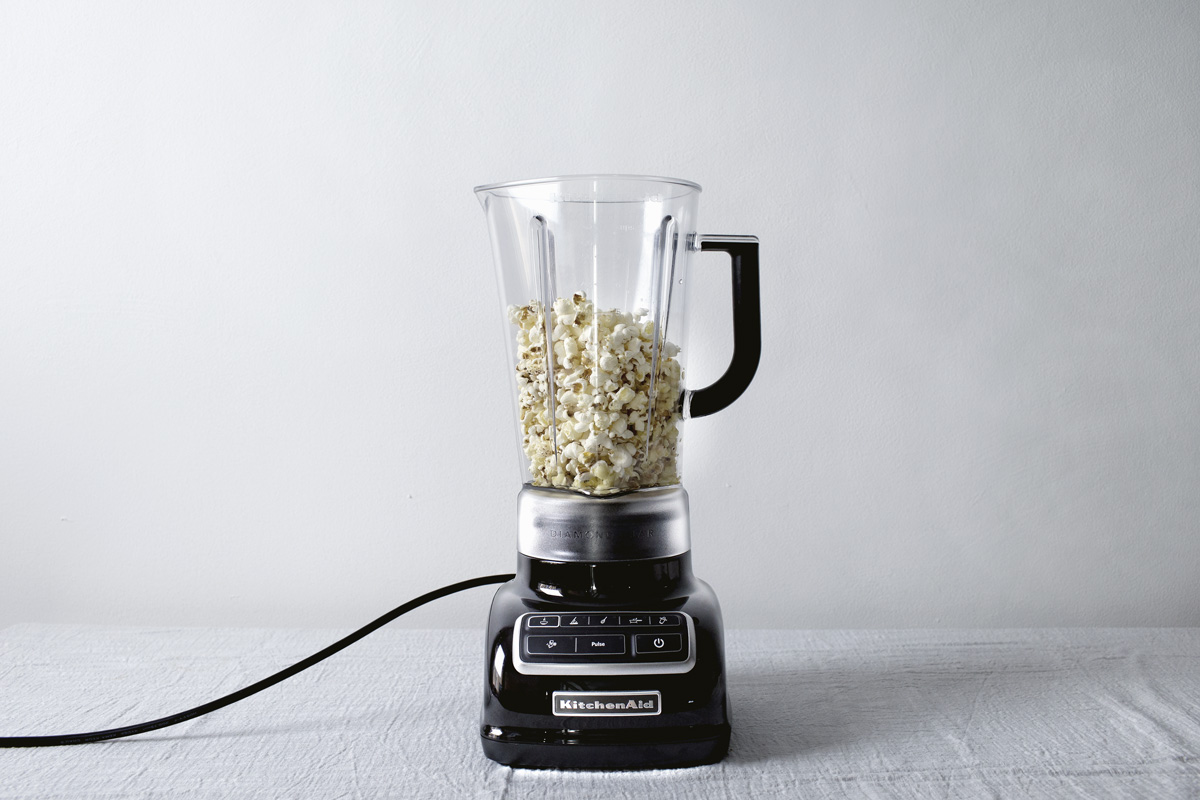 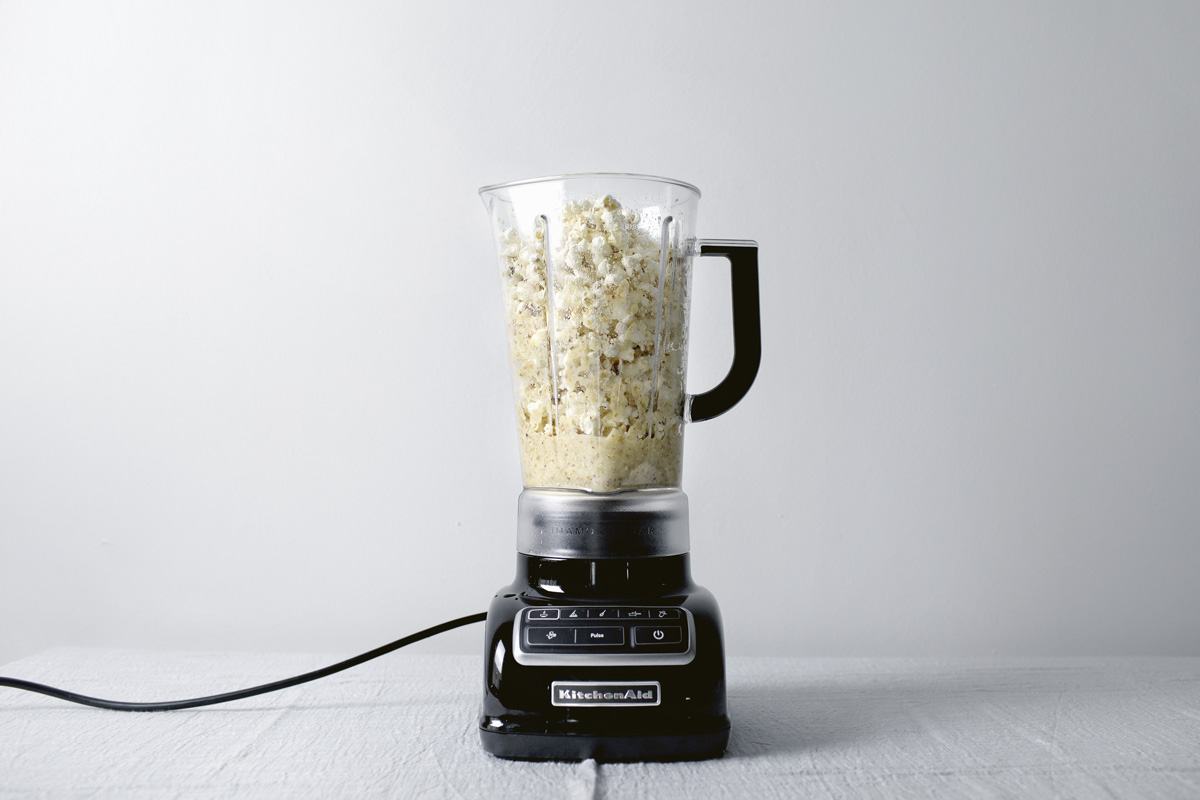 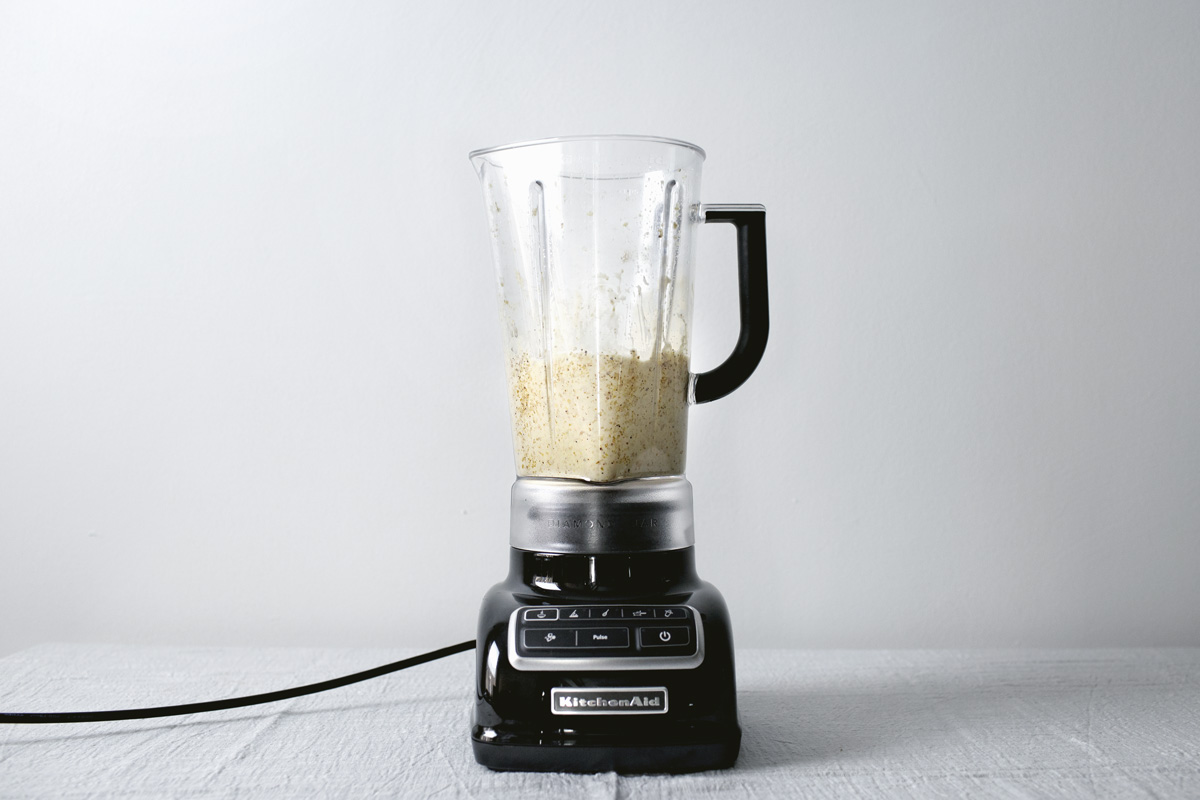 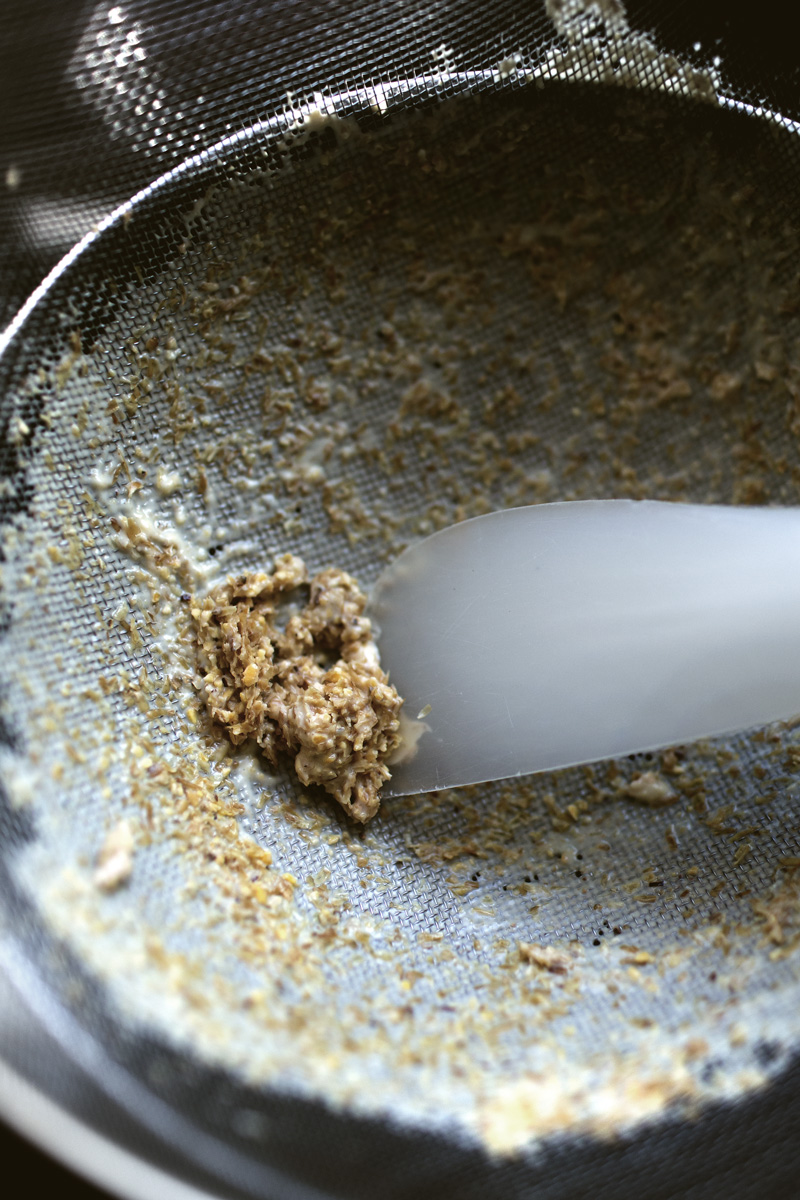 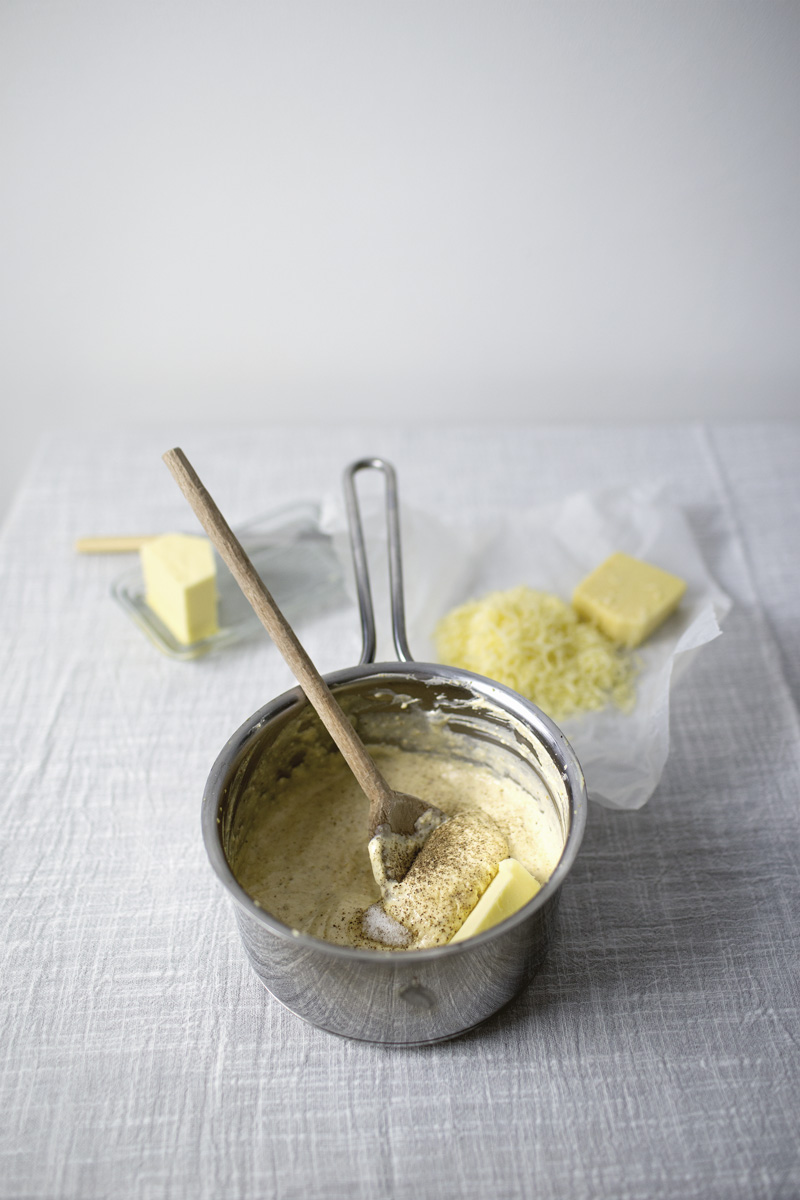 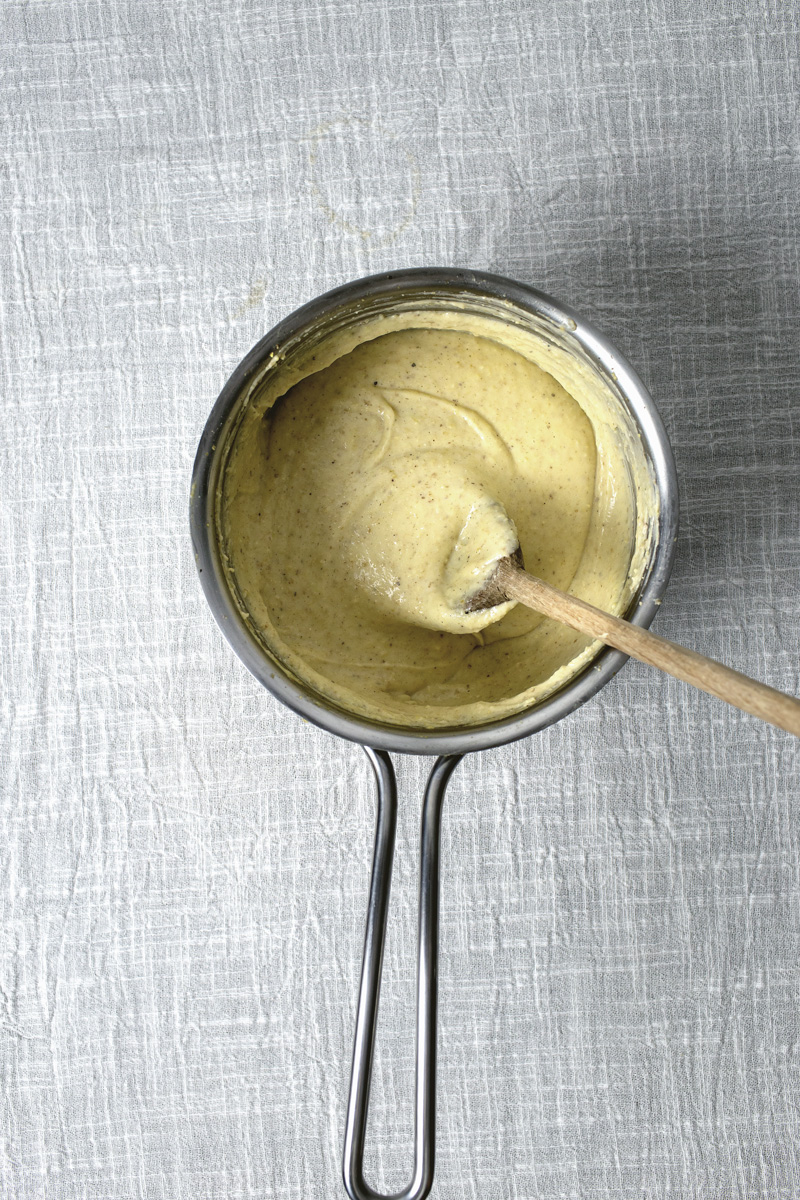 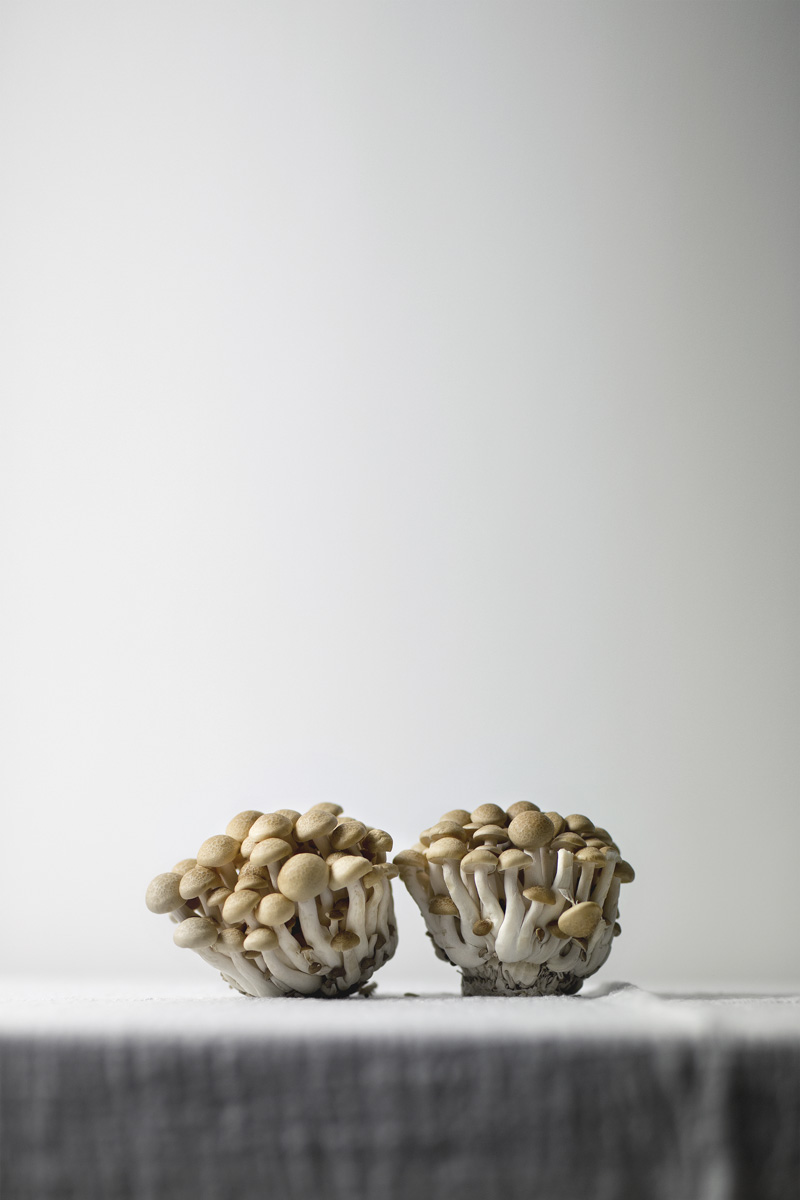 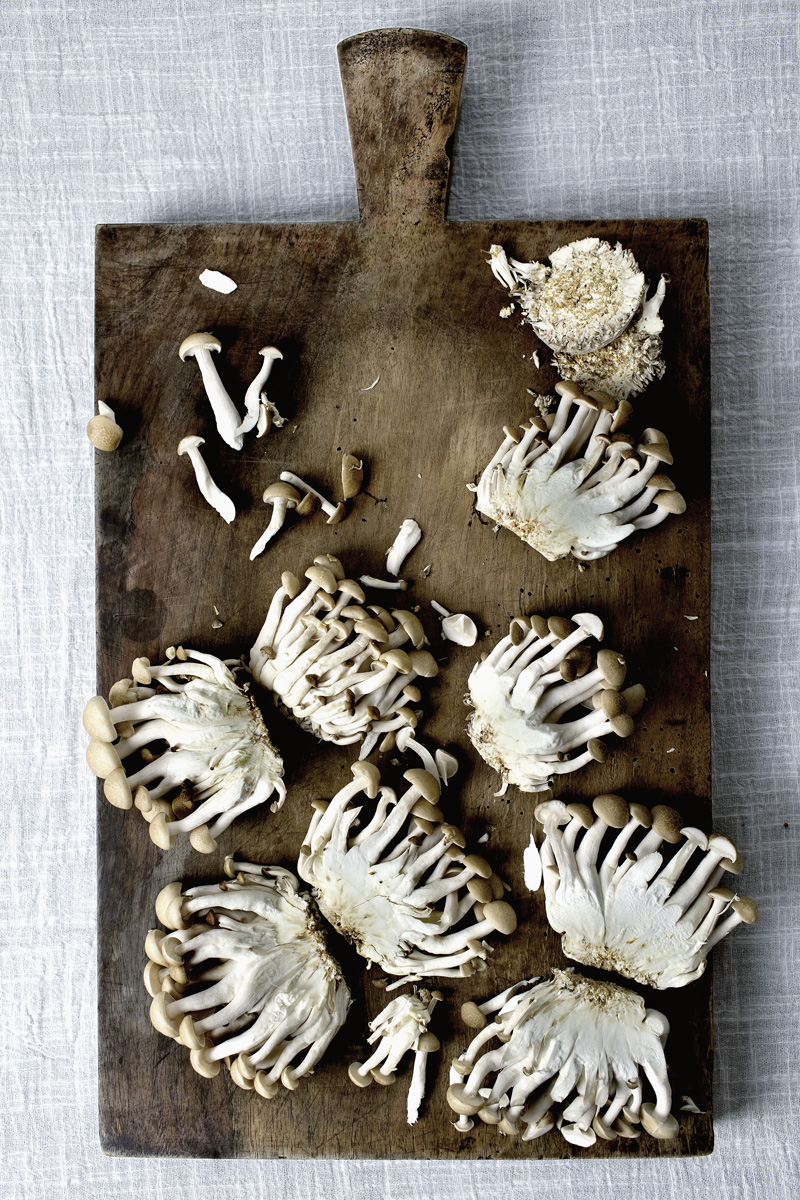 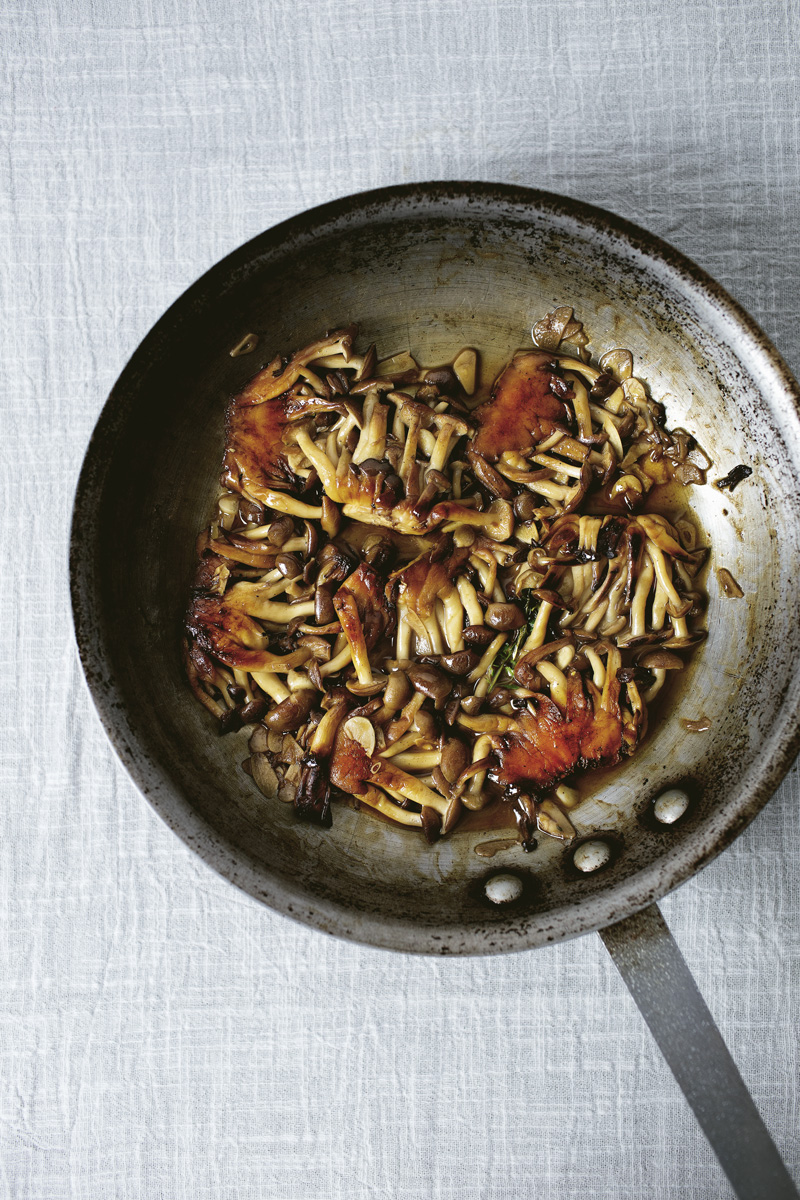 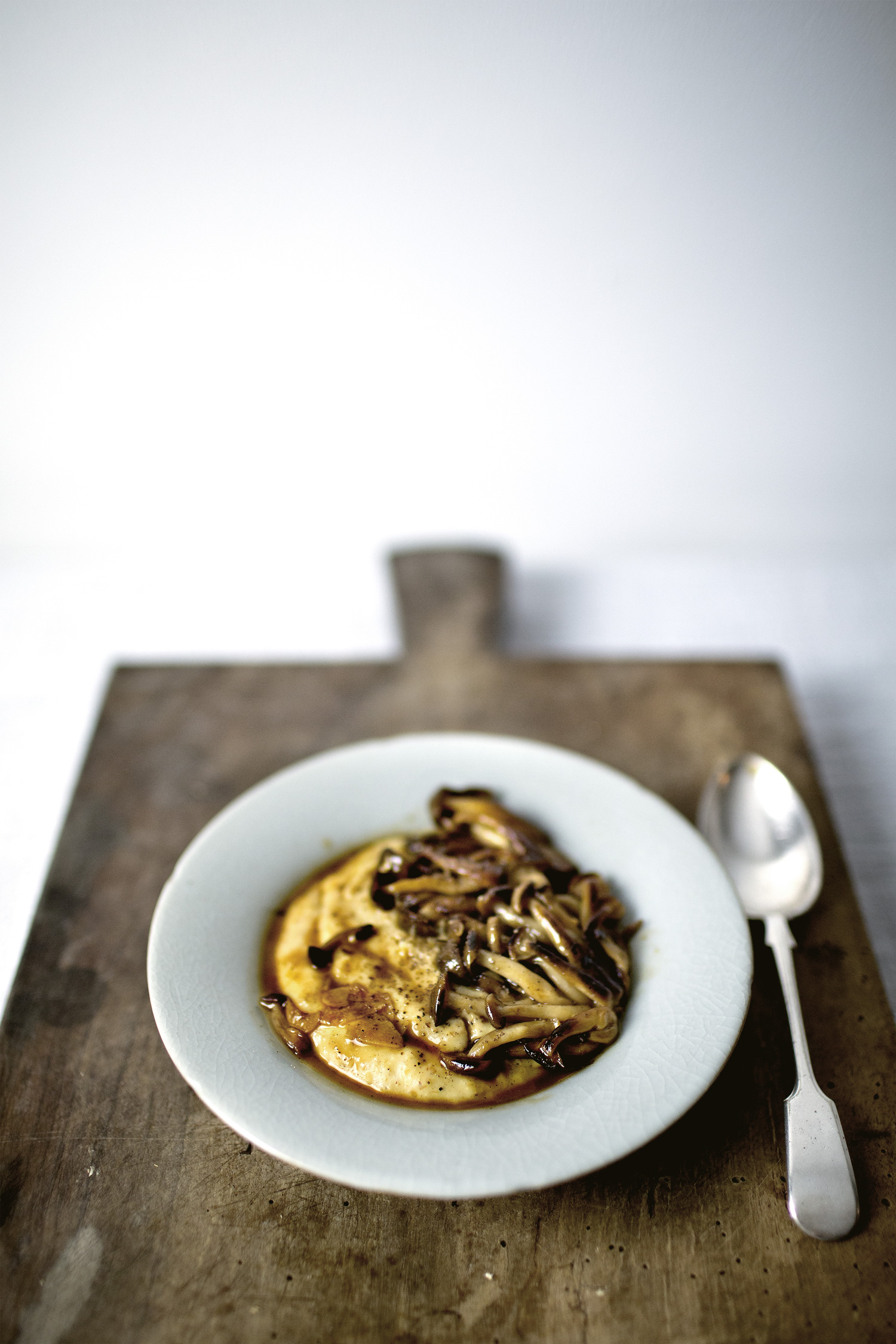 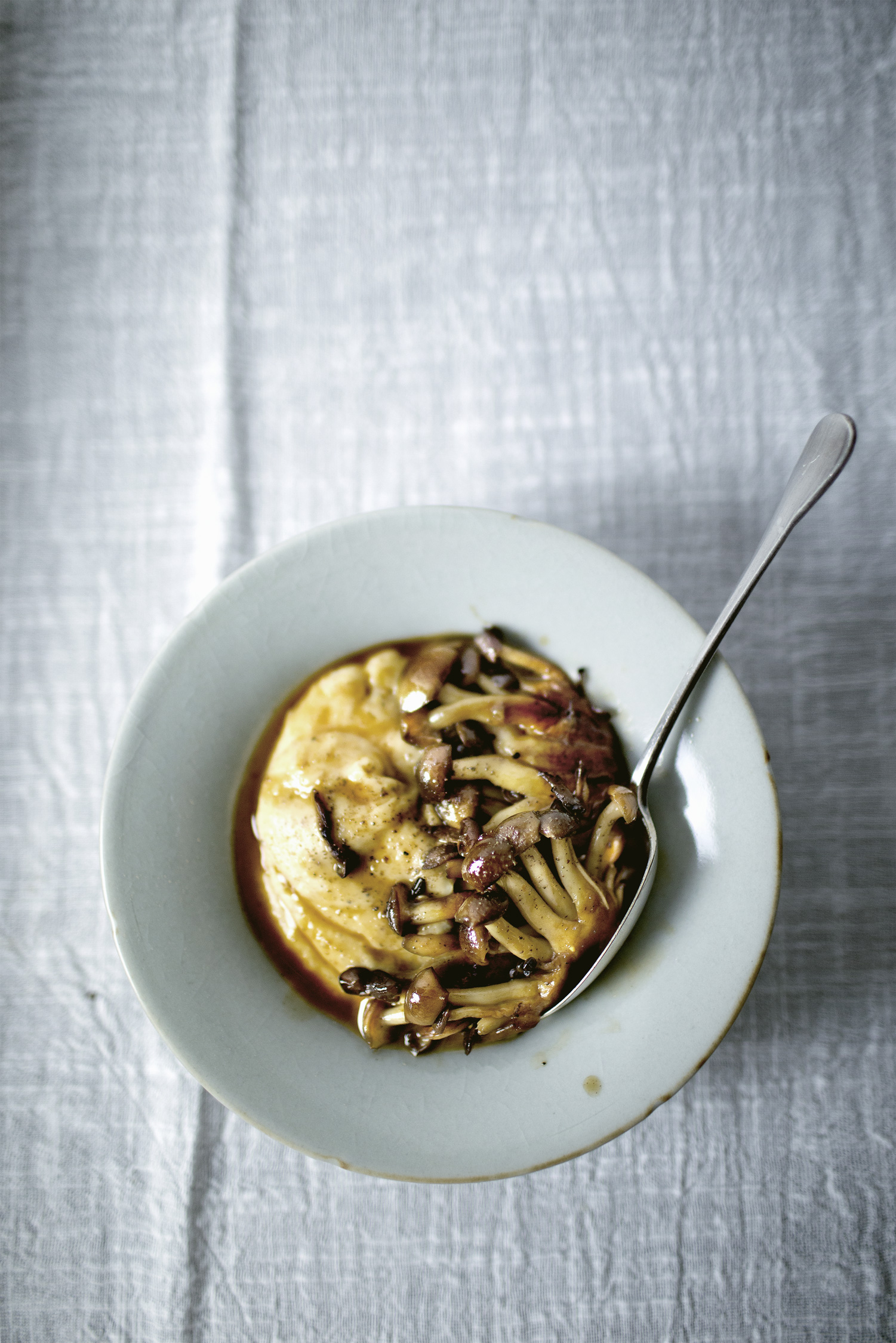 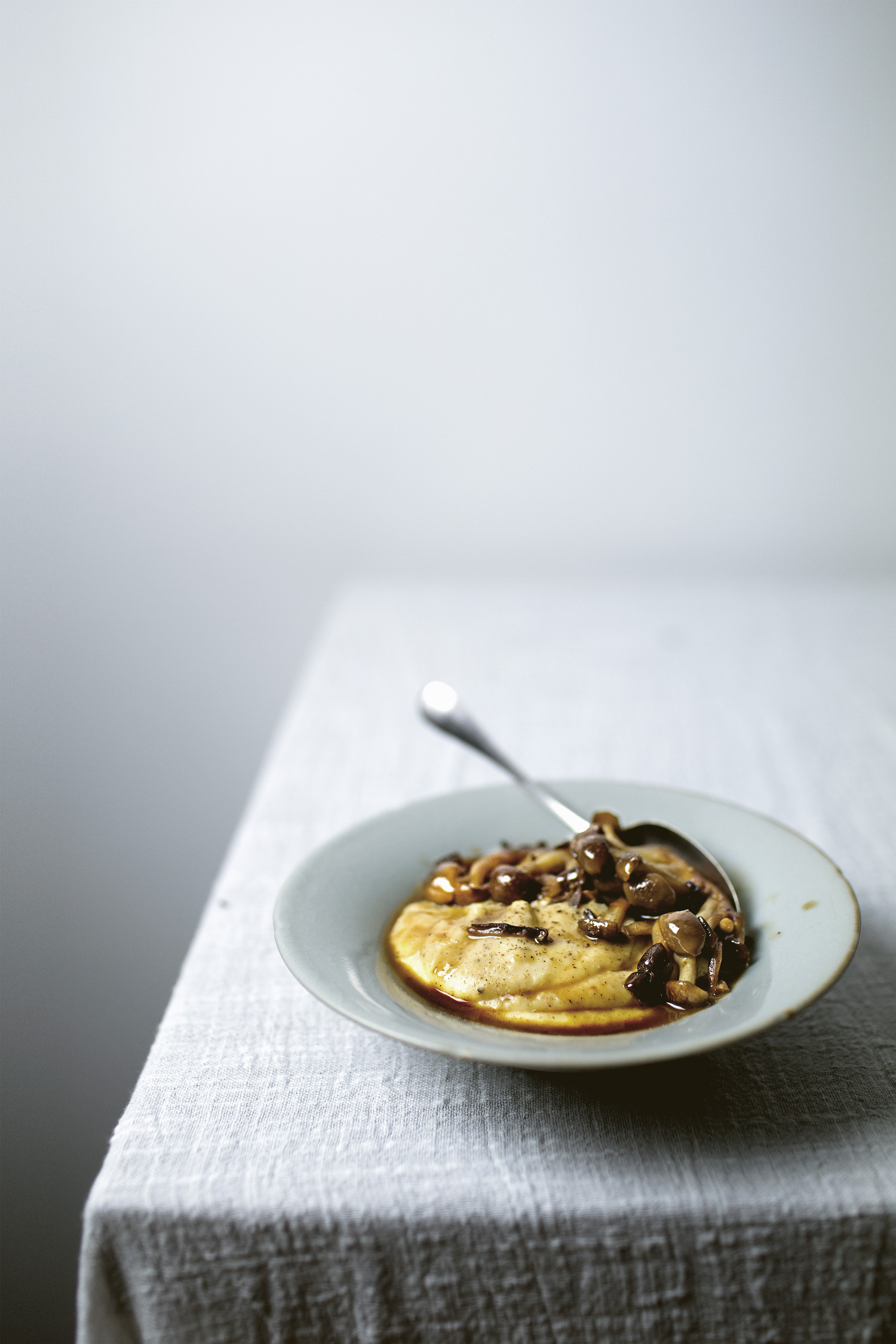 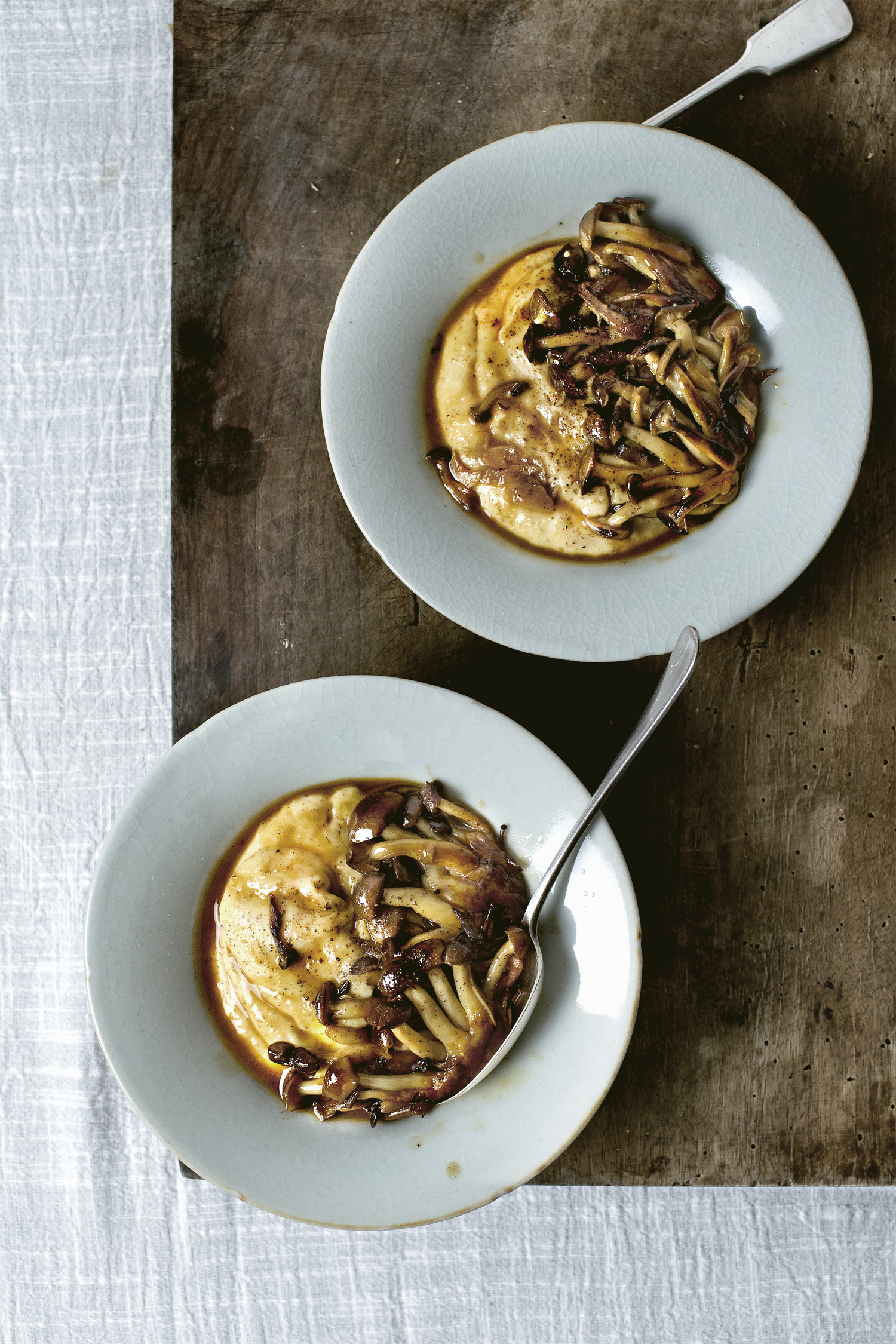 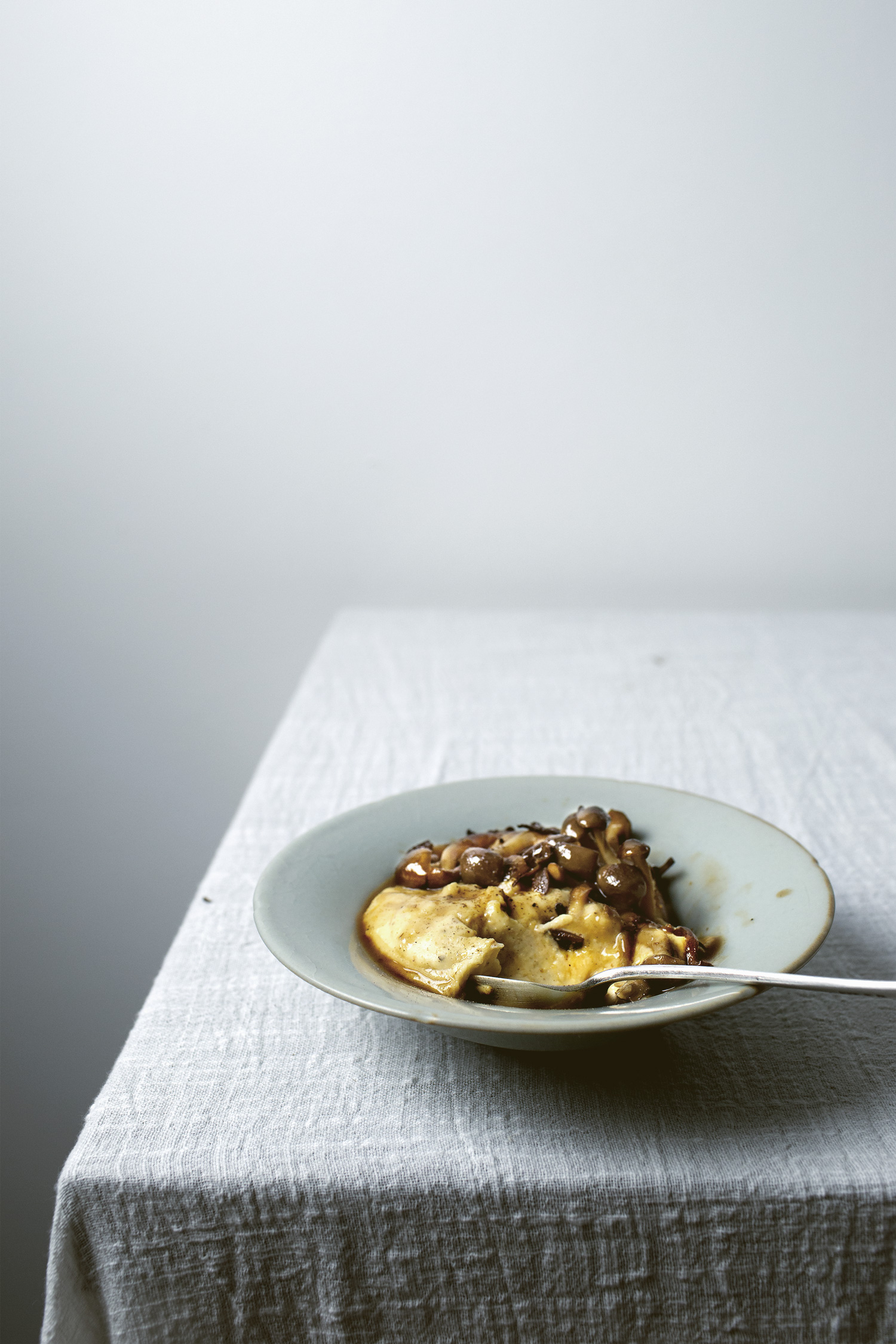