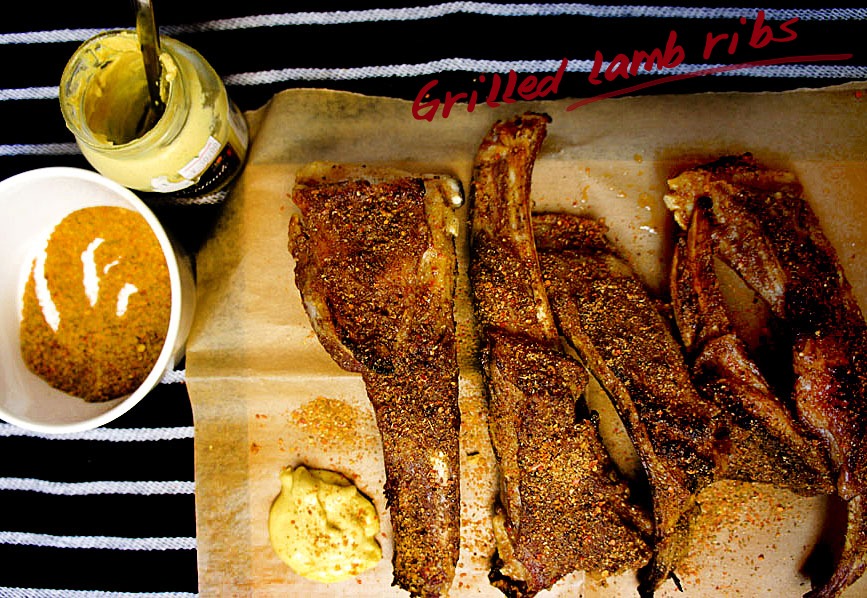 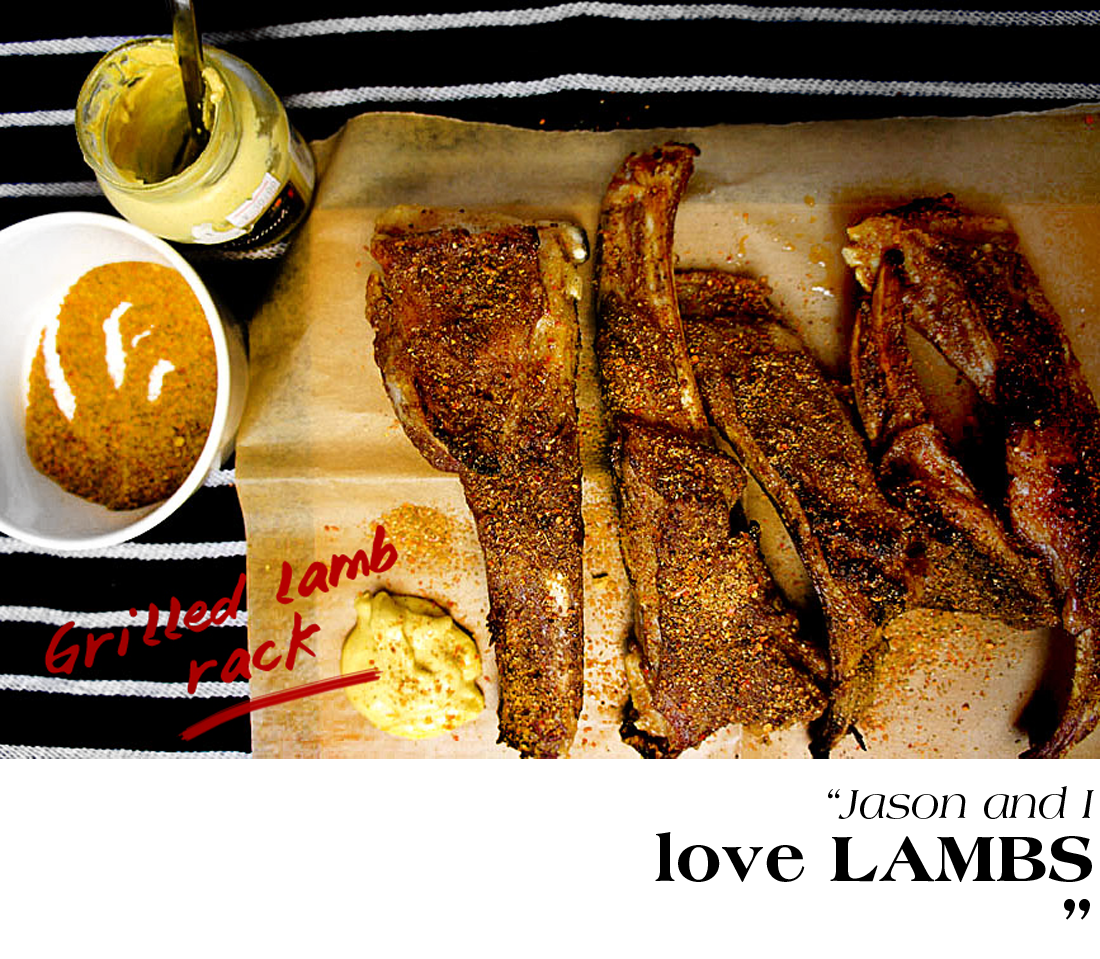 There are many who shy away from lambs, including a number of my personal friends.  So I’m not going to say anything rude here, only … what the hell is wrong with you?  Lamb is one of the most flavorful meat!  In some cases even tops beef!  Its unique flavor and aroma (is someone gagging right now..?) has no equal.  Yes, I’m talking about the “gamey-ness”.  What “gamey-ness”?  How come beef isn’t tagged with any condescending adjective, but only nice words like “beefy” and “meaty”, whereas lamb is stuck with “gamey” and “lamby”…..  Because of it, some restaurants would go the distance, like 12 extra steps to remove the unique flavor of lamb or goats.  What is this?  Tastes like beef.  If I wanted beef I would’ve ordered beef….  Now where’s my lamb? 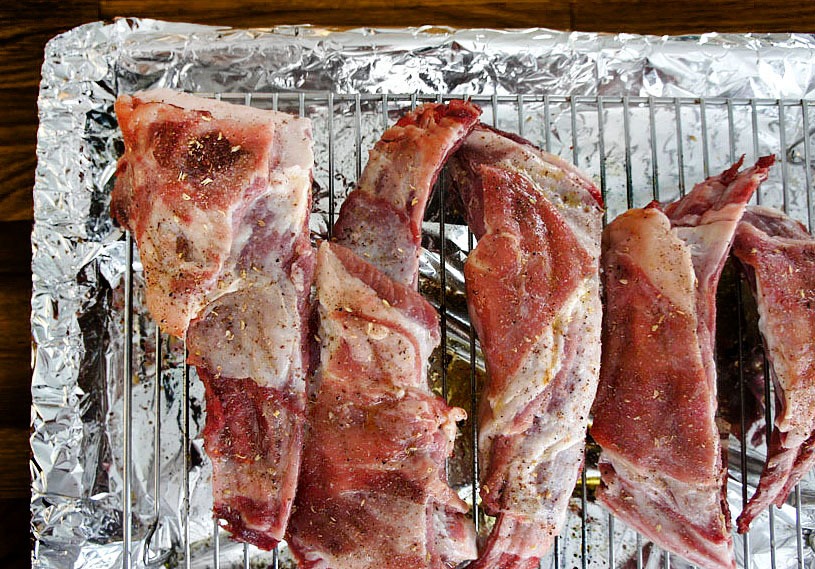 Northern China has an abundance of lamb.  When my husband told me we were moving to BJ, first came a tidal wave of cold sweat, then followed by a subtle, soothing voice… “hey, at least they got lambs over there”.  Yeah I’m optimistic like that.  And they are different from the mild Australian lambs Americans are used to.  These fellas are bolder and stronger in flavor, raised for professional lamb eaters.  Did I mention lamb has a lover in this part of the world?  It is a happy relationship, with a woman named Cumin.  Mmm~ this happiness is not a delusion.  If mint is lamb’s  fair, gentle, faithful wife  in the west, then cumin is the sultry, sexy, wild-hot mistress in the east.  And we all know which one men prefer. 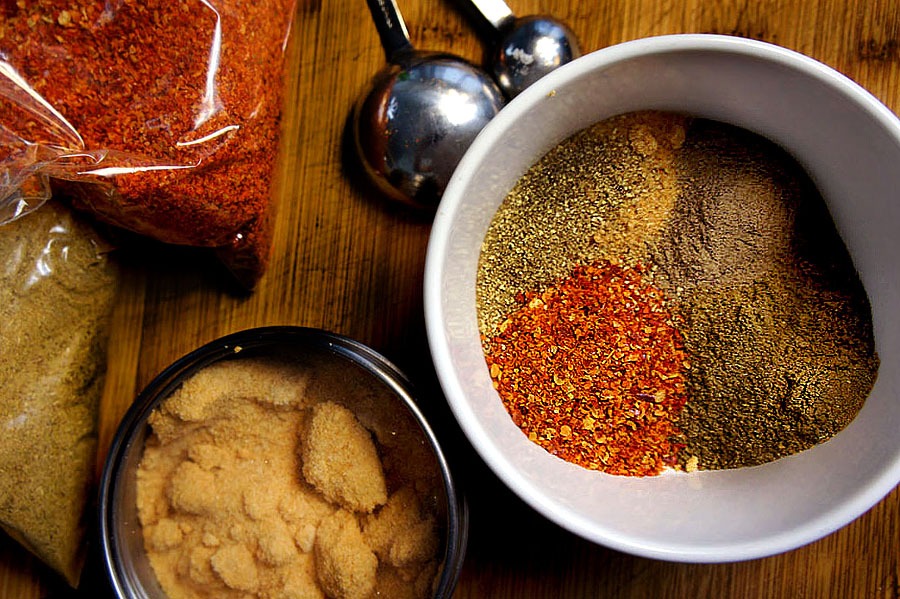 My favorite part of a lamb is the rib rack.  Any meat tastes better on the bone, and no parts of an animal has more bones than the ribs.  Now, lamb ribs here look a little different from the west and down under.  It doesn’t come with a thick strip of meat like our familiar Australian rack of lamb, instead it strikes a closer resemblance of a baby back ribs.  I’ve seen a close version of this on Fresh Direct, and in the Fairway market of the Upper West Side in New York, and it was called a “lamb riblets”.  Ok, I’m not a butcher so I could be wrong.  One of the many reasons why people should make friends with their butcher.  Anyways the point is, I don’t miss the absence of the extra meat at all.  In fact, I prefer it this way.  This rack of meat almost has the same structure of a pork belly, thin layers of fat and meat sandwiched in between each other, that you almost can’t overcook it.

So to continue, what’s happening here is not a fork’n knife, saucy, medium-rare Aussie lamb chop scenario.  This is a concentrated, spice-crusted, succulent meat-on-the-bone, barbarian style scenario.  Respectable people who chew on the bone after their bone-in rib eye would understand what’s at stake here.  This is not a dish for the ladies who lunch.

Now.  I’ve had similar dishes in restaurants here, where they fry the ribs whereas I’m broiling them in the oven.  Ok, plus and minus points on both sides.  Obviously everything fried is going to be juicer (it’s really just fat, not juice), but it won’t have the slightly charred, salty crust in the broiler.

Plus it’s pure insanity to fry a rack at home….c’mon…. 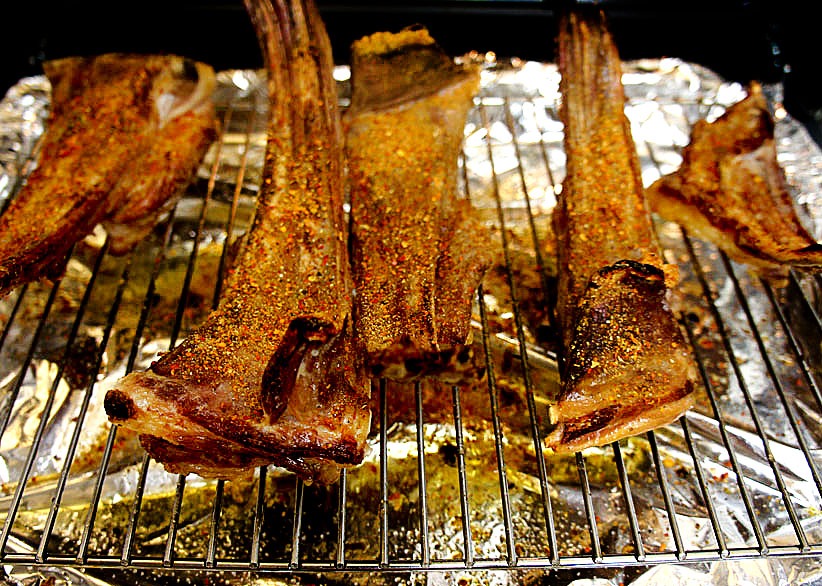 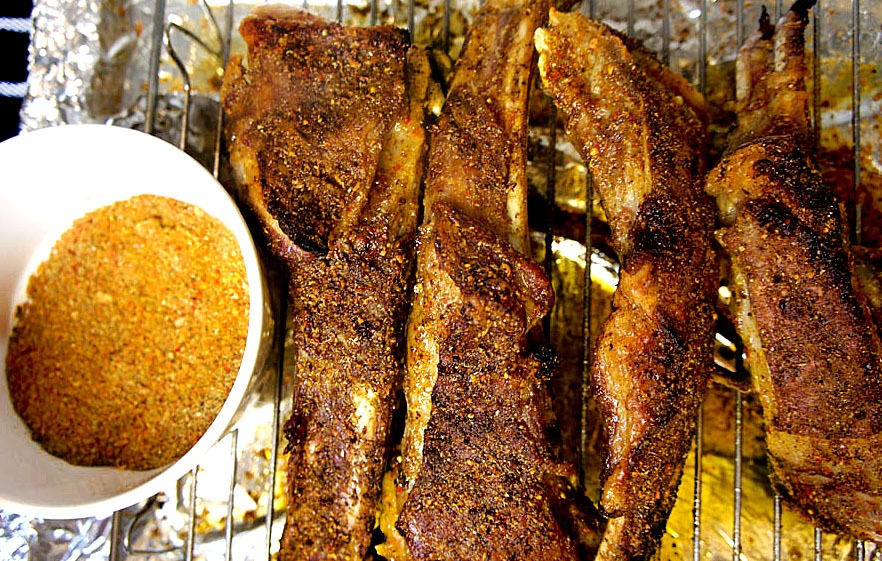 First, separate the ribs so very segment have 2 rib bones.  Space them out even on a baking rack and rub it with a light layer of olive oil.  Salt’n pepper them on BOTH sides and let them marinate for a couple of hours, covered in plastic wrap.  I’m keeping it pure and simple here.  No fancy marinate with garlic or thyme or rosemary.  The main attraction here is the lamb and the cumin.  Remember?   Crazy in love?

I preheat the oven on high broil.  The highest my oven has got.  This is the time for the oven to work it.  Unwrap the lamb ribs, and make sure they are spaced out evenly.  Once the oven is preheated, I place the baking sheet on the 2nd highest level in the oven.  The meat should have a 2 ~ 3 inches (6~8cm) space between the broiler.  Yes, an “upside down” grill.  Note: It’s important not the rub the spice on the lamb now or they will burn!!  Put the lamb in the oven and let it roast and crisp up under the broiler.  Every oven is different so I can’t say for how long.  Just watch them turn golden brown, ok.  Once the top of the lamb gets a little char, turn it over and let the other side roast as well.

When the ribs are slightly charred and form a crust on both side, pull it out from the oven then ATTACK it with the spice mix!  Like a LOT of it on BOTH sides!  Return the ribs into the oven and WATCH IT like a hawk.  I don’t care if the blackberry was vibrating to death, or if the baby was screaming for milk.  DO NOT leave your lamb ribs with the spice mix in the broiler alone…..  They WILL burn.  The spices just need to sizzle up ever so slightly in the lamb fat on both sides, just so the aroma can be released.  This will only take 10 to 20 seconds depending on the oven.

The lamb ribs is perfect on its own now, but a little mustard and extra spice on the side never hurts anyone. 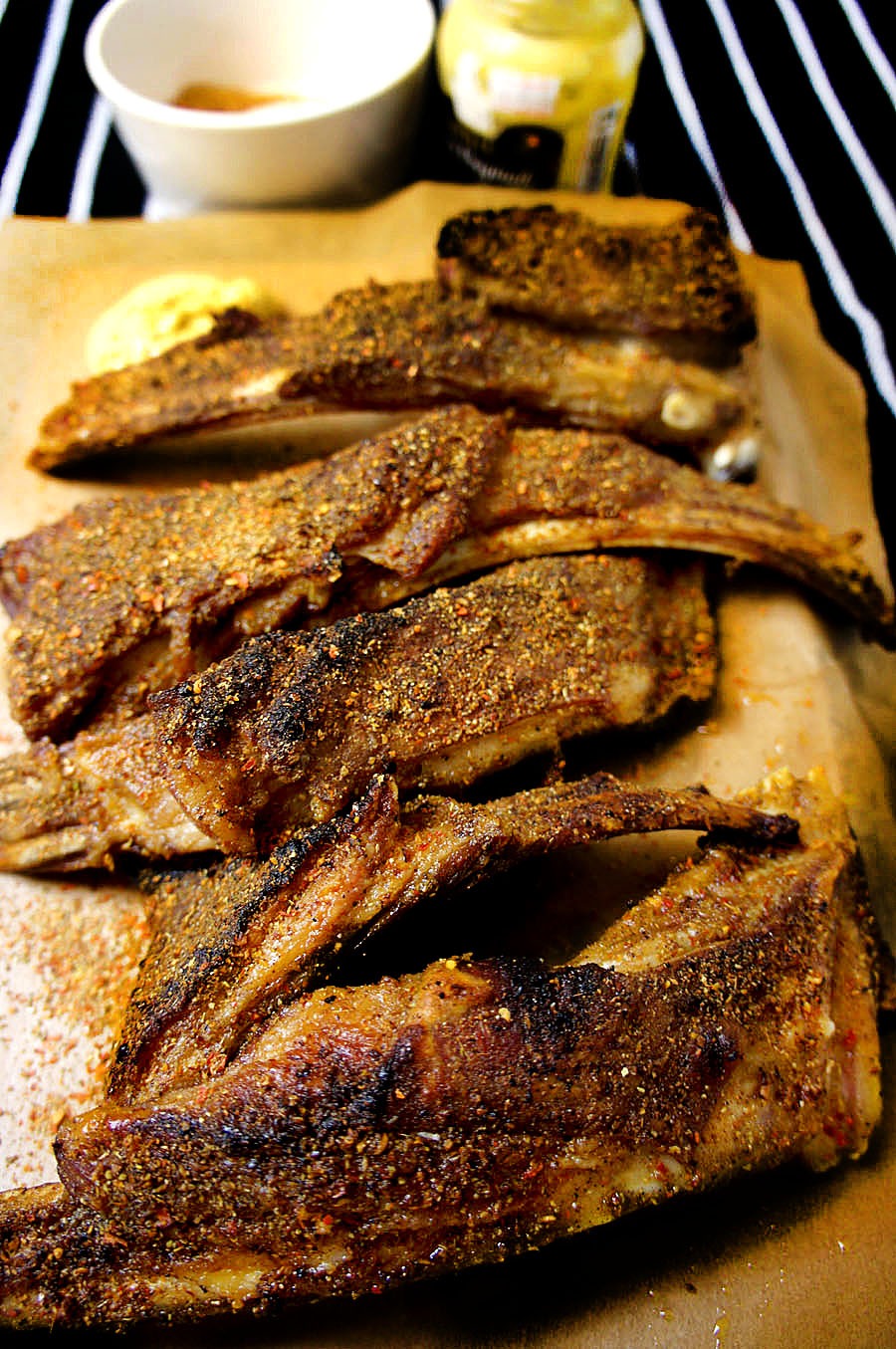