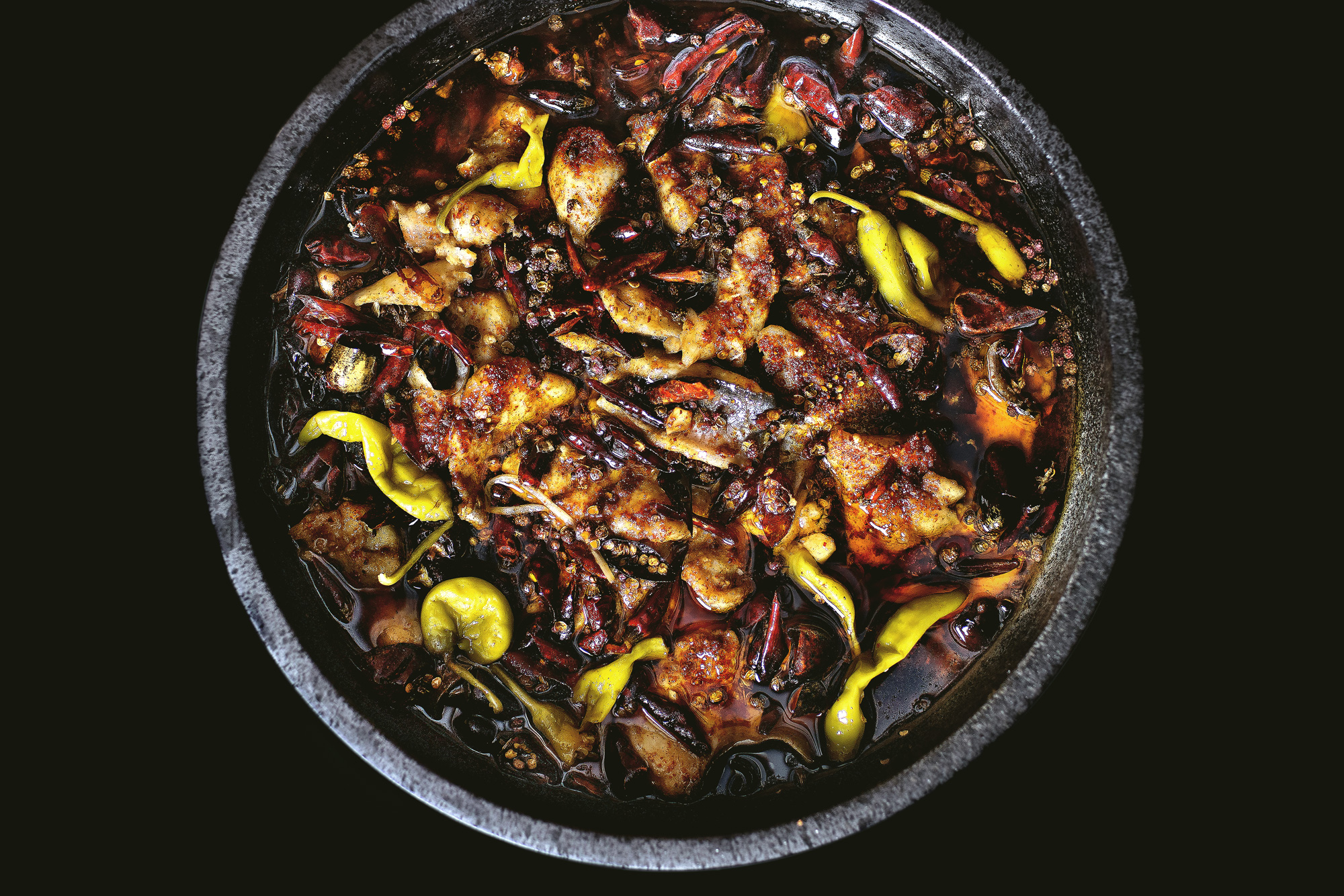 IT TRANSFORMS WHAT IS OTHERWISE AN UNDESIRABLE AND THEREFORE CHEAP INGREDIENT,

INTO THE UPMOST ADDICTIVE, DELICIOUS, AND PLEASURABLE NARCOTIC.

It’s crazy sometimes to think that I’ve only left Beijing for 6 months.  It somehow feels longer than that, which is funny because shouldn’t happy time fly?  But I think my brain has triggered an automatic mechanism that blocks the whole six-years-chunk of unpleasantness, and started presenting the more palatable reality that came afterwards as the constant norm, that our new life in Hong Kong has always been.  Weird, right?  Though it’s not to say that there aren’t things I miss about you-know-where, but I mean, I just typically disregard them as the involuntary muscle spasms of a fish right after its head gets chopped off…  I try not to think about it… don’t think about you-know-where…

But the other day, it all came boiling down.

A couple friends of ours arranged a harmless get-together in a seemingly unalarming location, and just like that, the dam broke loose.  The restaurant was a sichuan joint.  Ahh.. now I remember, sichuan foods.  The extremely intense, erotic, sometimes even perversive addiction that is the grand cuisines of sichuan.  Yes.  Yes baby I did miss you.  I don’t know why it took me so long to realize it, but it’s about time that something is to be done about it.  Of course, my obsession with sichuan foods has been quite well documented here.  I mean that broad rice ribbons riddling in chili oil, the spicy numbing crayfish boil, the melt-your-face hot pot….  But that day, I realized, I have forgotten the Queen B.

B, as in boiling. 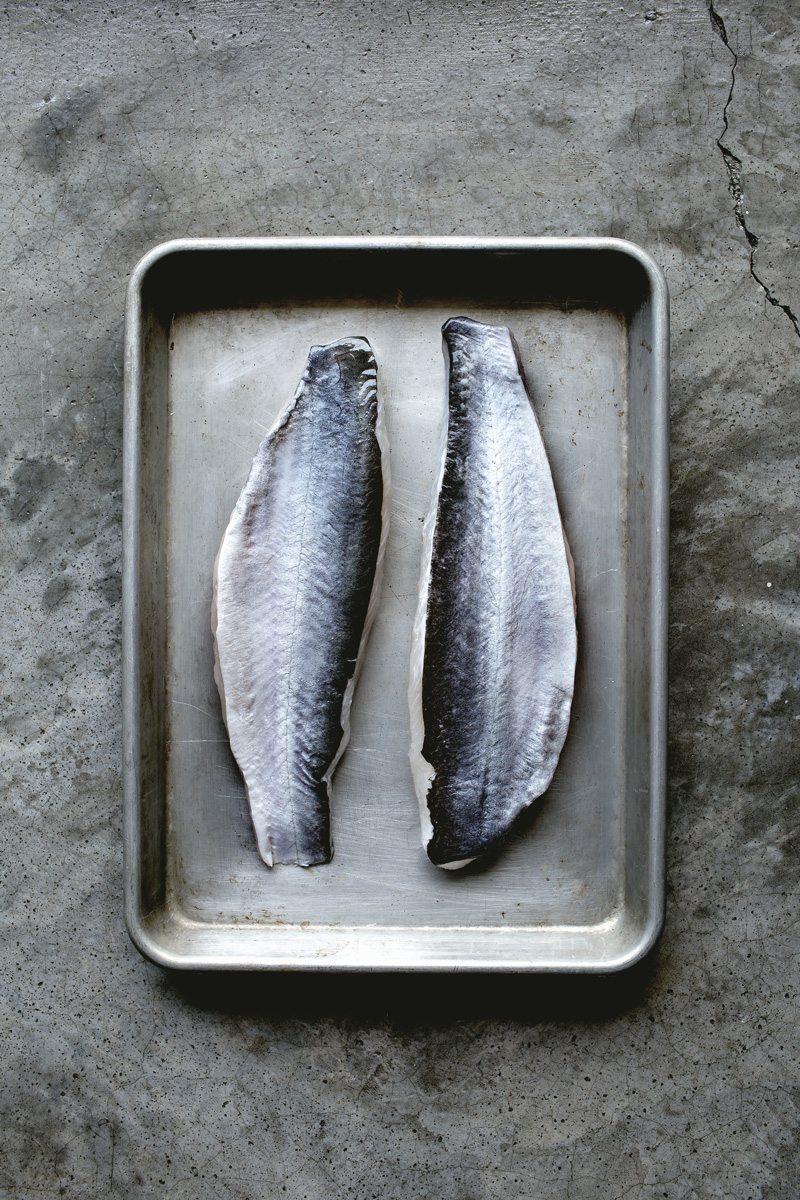 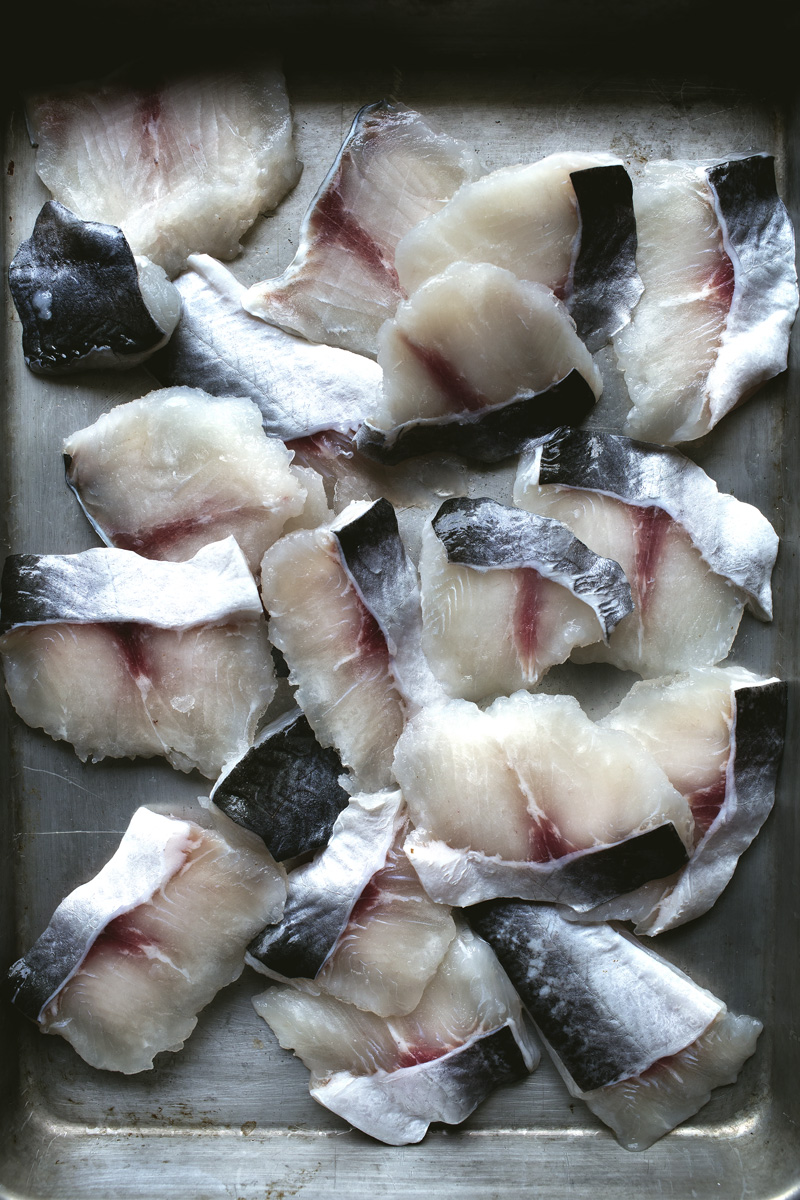 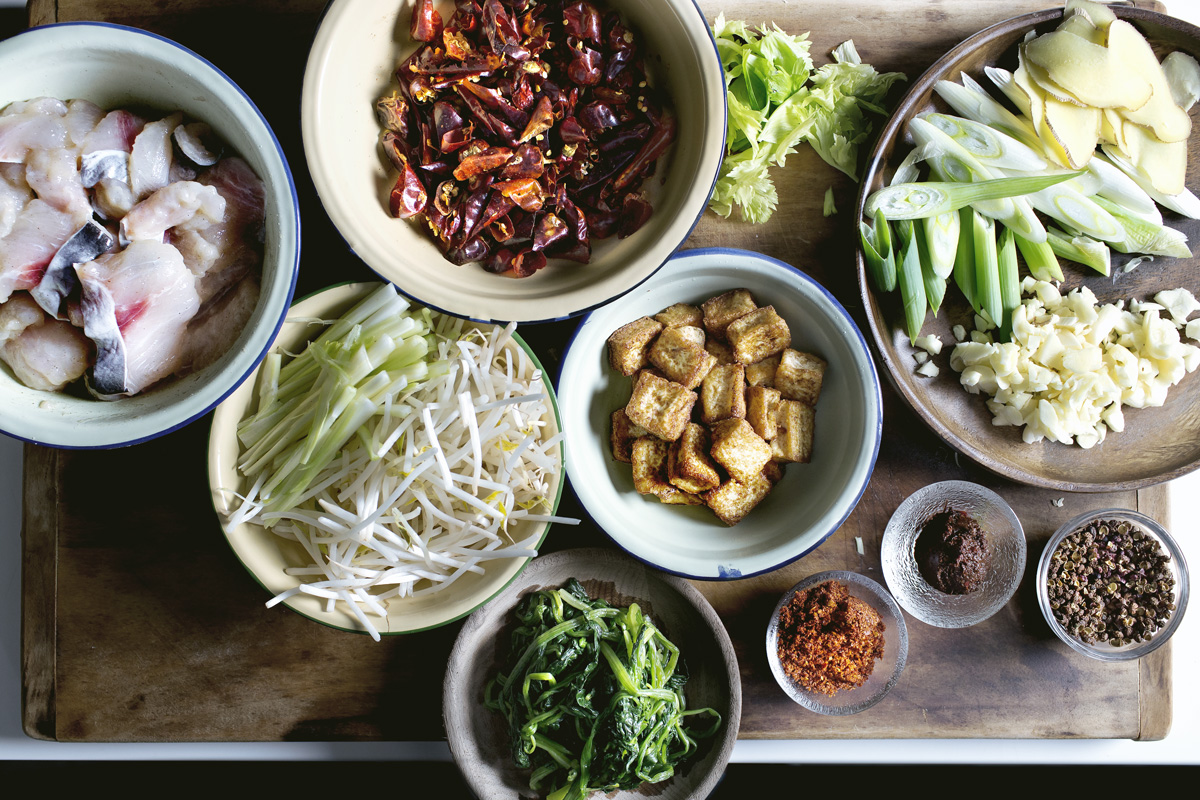 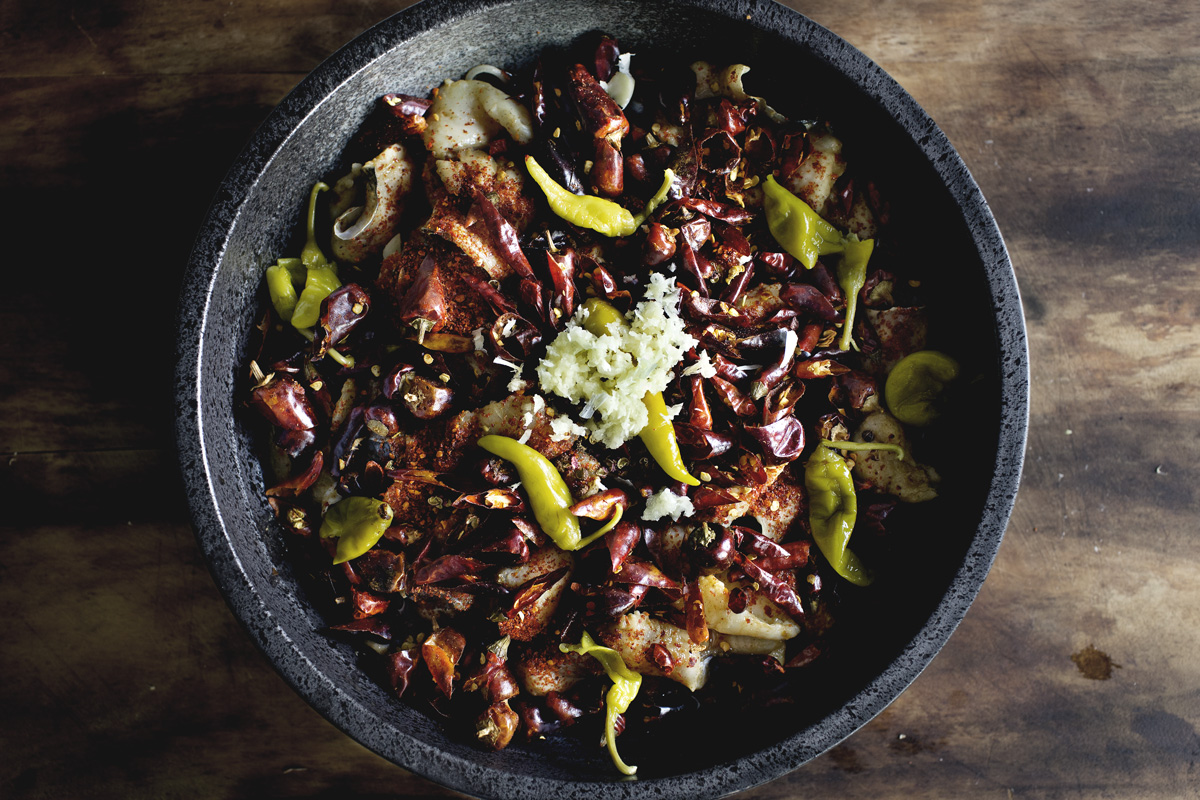 The dish is called, in literal translation word by word, water boiled fish.  Which can’t be further from reality.  Whenever we (or everyone else for that matter) go for a fix for sihcuan foods, this is probably the dish to order, mandatory in almost every sichuan restaurants like a red sauce spaghetti in Italian’s, except that it’s anything but benign.

If you weren’t briefed about it before hand or didn’t get the memo, it could come as a total shock on more levels than one.  First, you wonder, is this even edible?  It usually comes in an enormous vessel too vast to be called a dish and from the surface of which, only looks like a deep, dark pool of red hot boiling grease with a blanket of tumbling dried chilis and sichuan peppercorns.  You’d be frightened, I know, like what am I supposed to drink this good lord?, but only to realize a moment later, that this is not even the most insane part.

The craziest thing about the dish, is that the purpose of this extreme insanity is not even a leading role, but only to support and perfect flavor-wise and texturally what lays underneath – a bed of thinly sliced catfish.  Like whaaat?  Catfish?!  The dirt fish, the garbage river creature that is snubbed by just about any respectable restaurants in the US for its slightly muddy after-taste, and is only pleasing to receive when you watch a huge one getting caught on River Monsters?  That fish?  Yes, that fish.

Which is exactly what makes it the most ingenious idea.

Why, because it transforms what is otherwise an undesirable and therefore cheap ingredient, into the upmost addictive, delicious, and pleasurable narcotic.  At this point you might be thinking, well, you are not really eating the catfish but just something that is totally muted and manipulated by all that aggressive seasoning.  In fact, everything tastes the same inside that tub of raging blood bath.

Logical.  But you’d be wrong.

Catfish may not be superior flavor-wise, but it is unique and sought-after for its textures.  The fatty, voluptuous, supple but firm flesh that is pushed to the level of sophisticated gourmet when it’s poached and encased inside the meticulously balanced concoction – pungent, savory, painful, numbing, aromatic and perfectly greased.

Its apparent insanity, is in fact, utterly calculated.  And completely brilliant.

Perhaps the only legitimate concern whenever we order one in a restaurant is that all this flavor-bomb oil, this liquid ruby, will go to waste at the end of every meal, but it doesn’t have to be the case when you make it at home.  Save the oil!  Brush it over roast chickens or drizzle it over your pork dumplings, or hell, forget about making sense and just fucking have a blast for once.  Even though the very thought of this dish goes against every good teachings and principles of western cooking, and you’ll most likely, at first, try to resist, but when you start sinking into that nose-running and sweat-dripping ecstasy, embracing the assaults, there is no going back to rationality.

In fact, isn’t this the most fantastic lesson foods can teach?  The more you know, the more you realize you don’t know.

Get lost in it.  Submit.

This is a one-way highway, and I’m dragging you down with me. 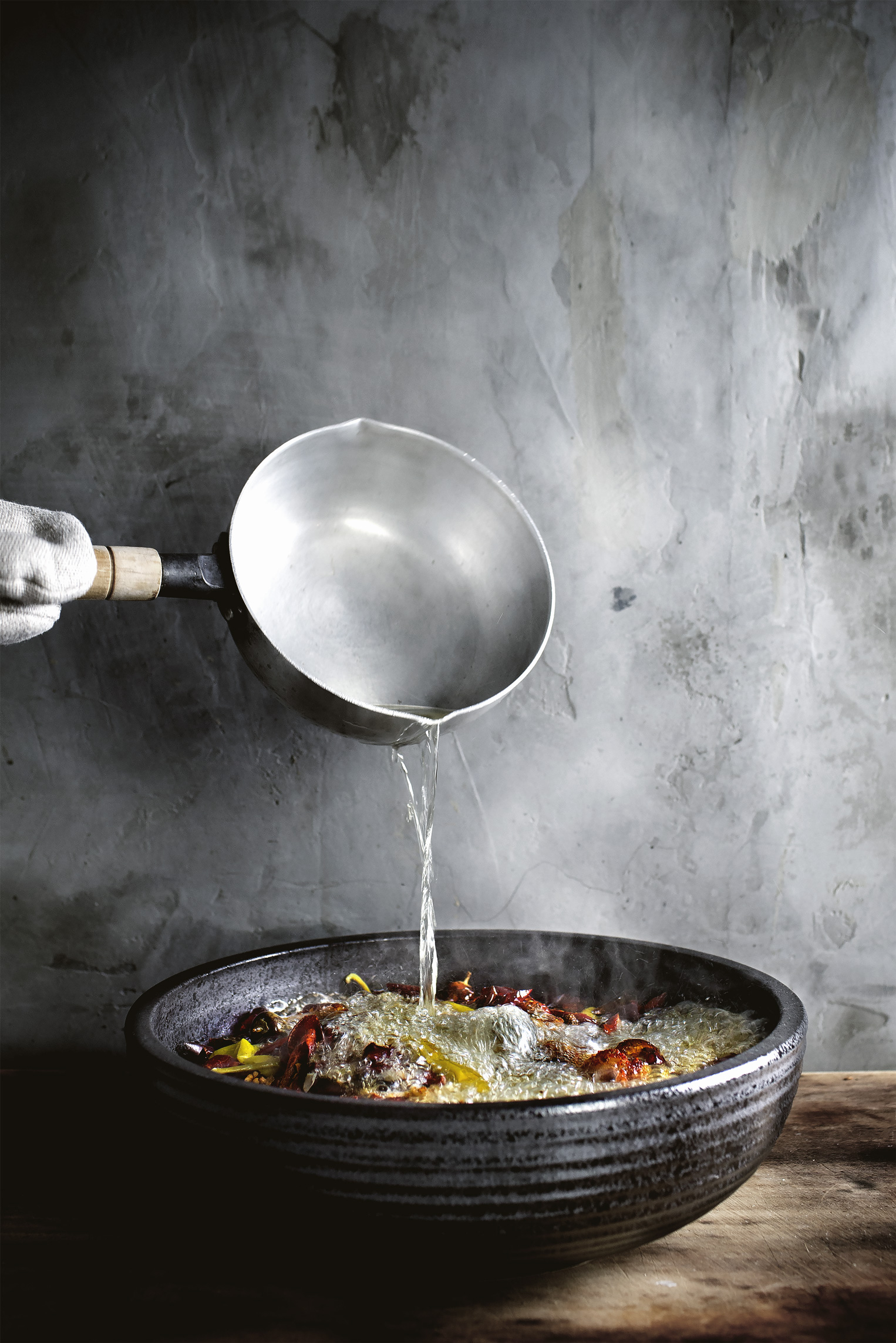 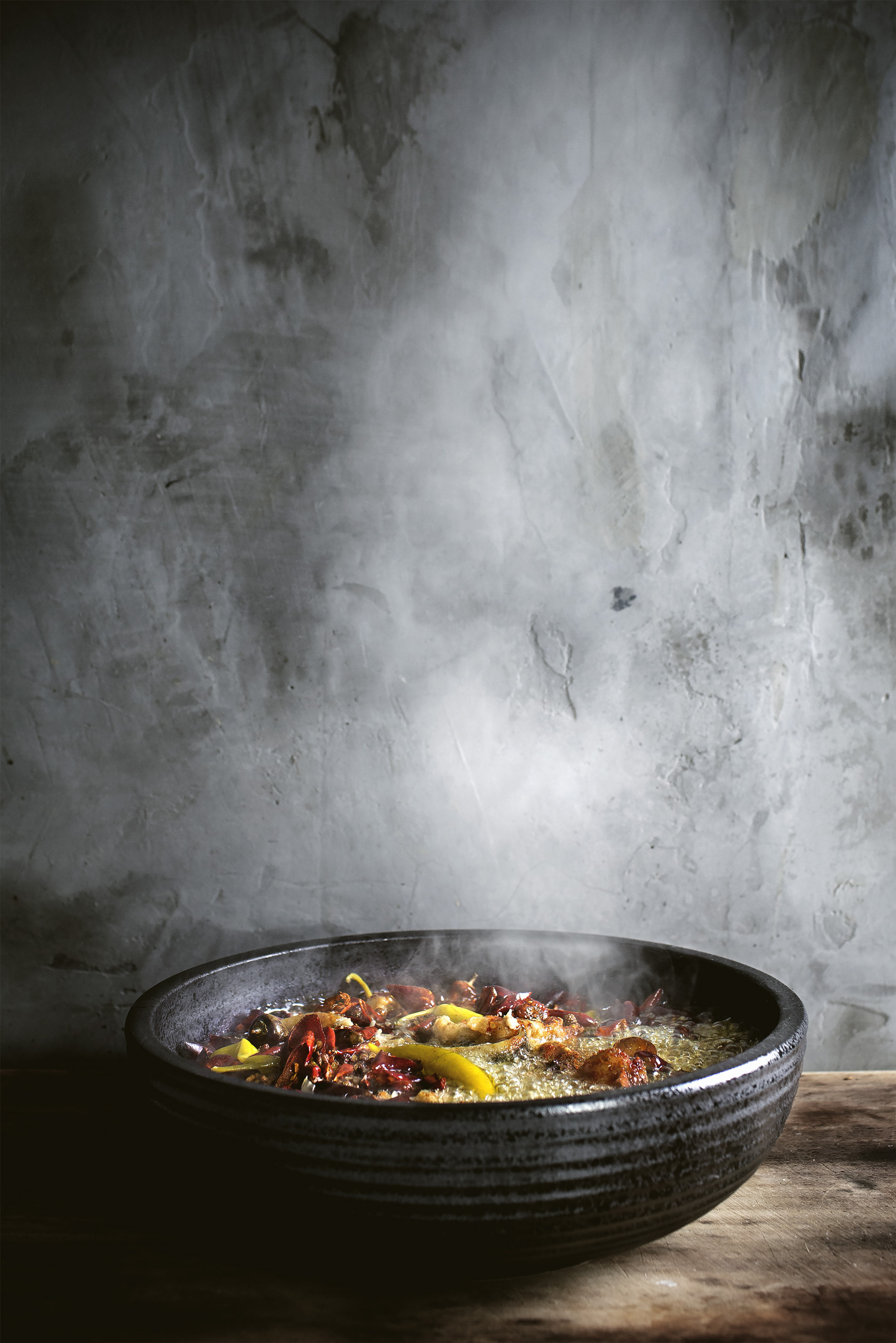 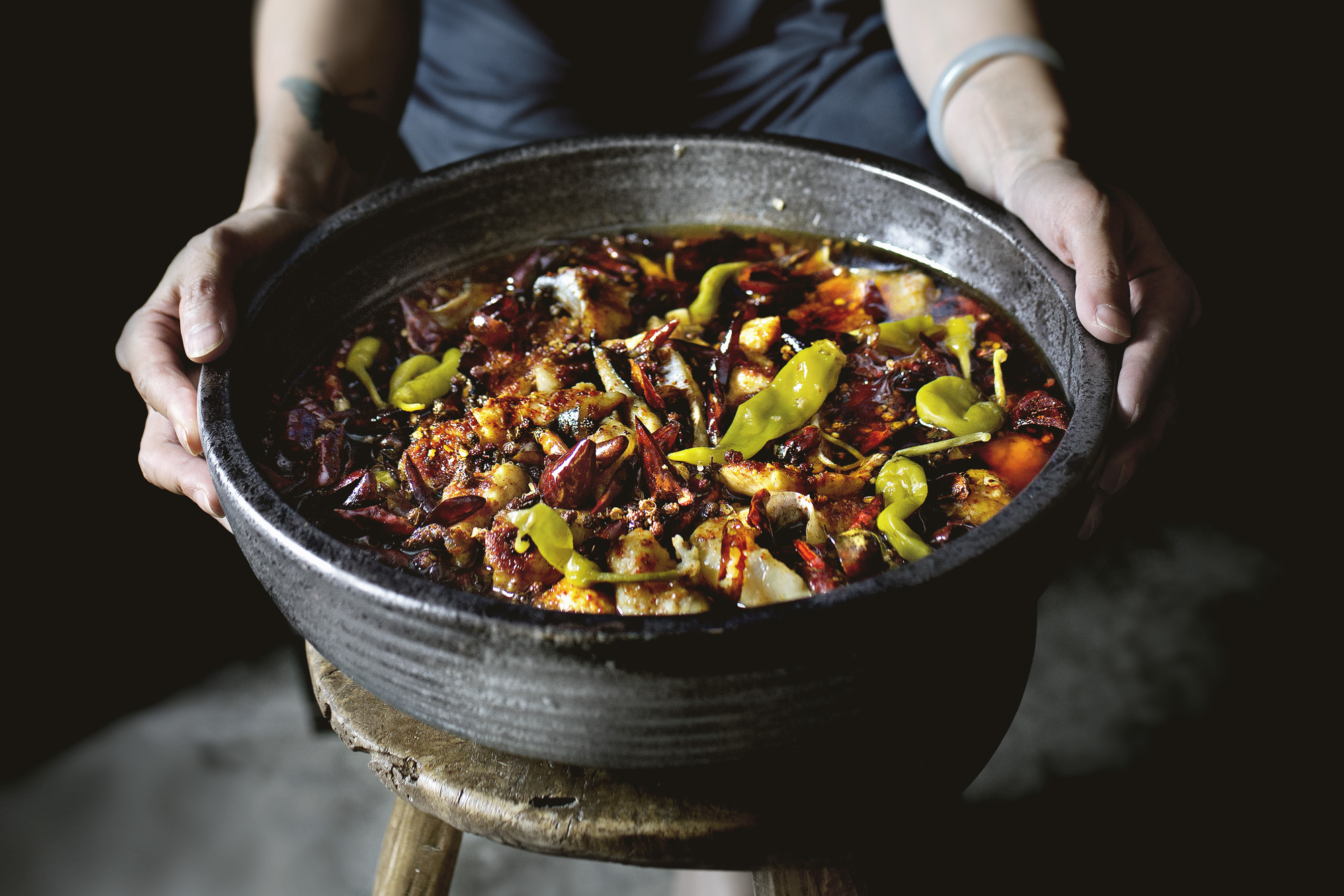 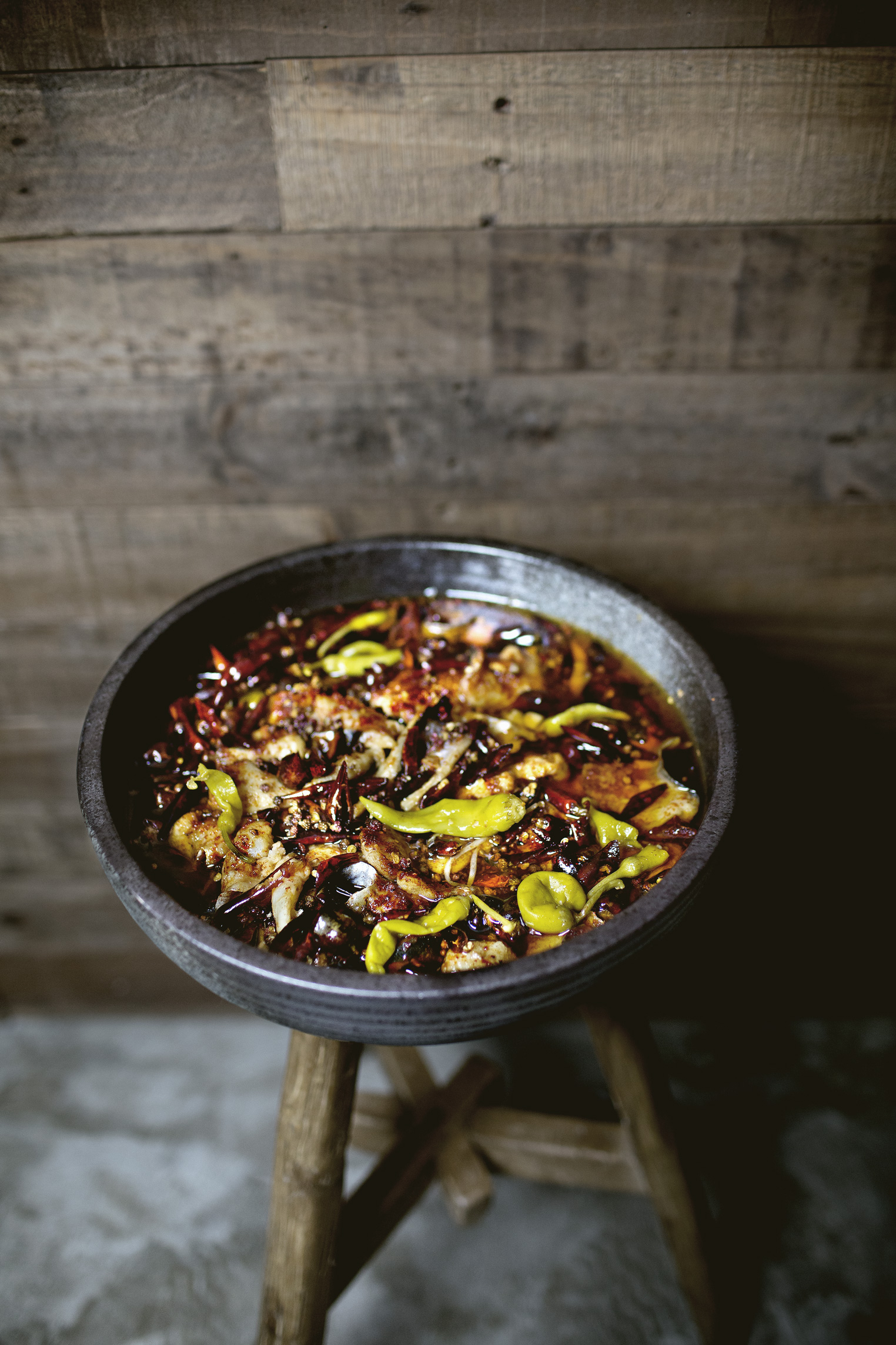 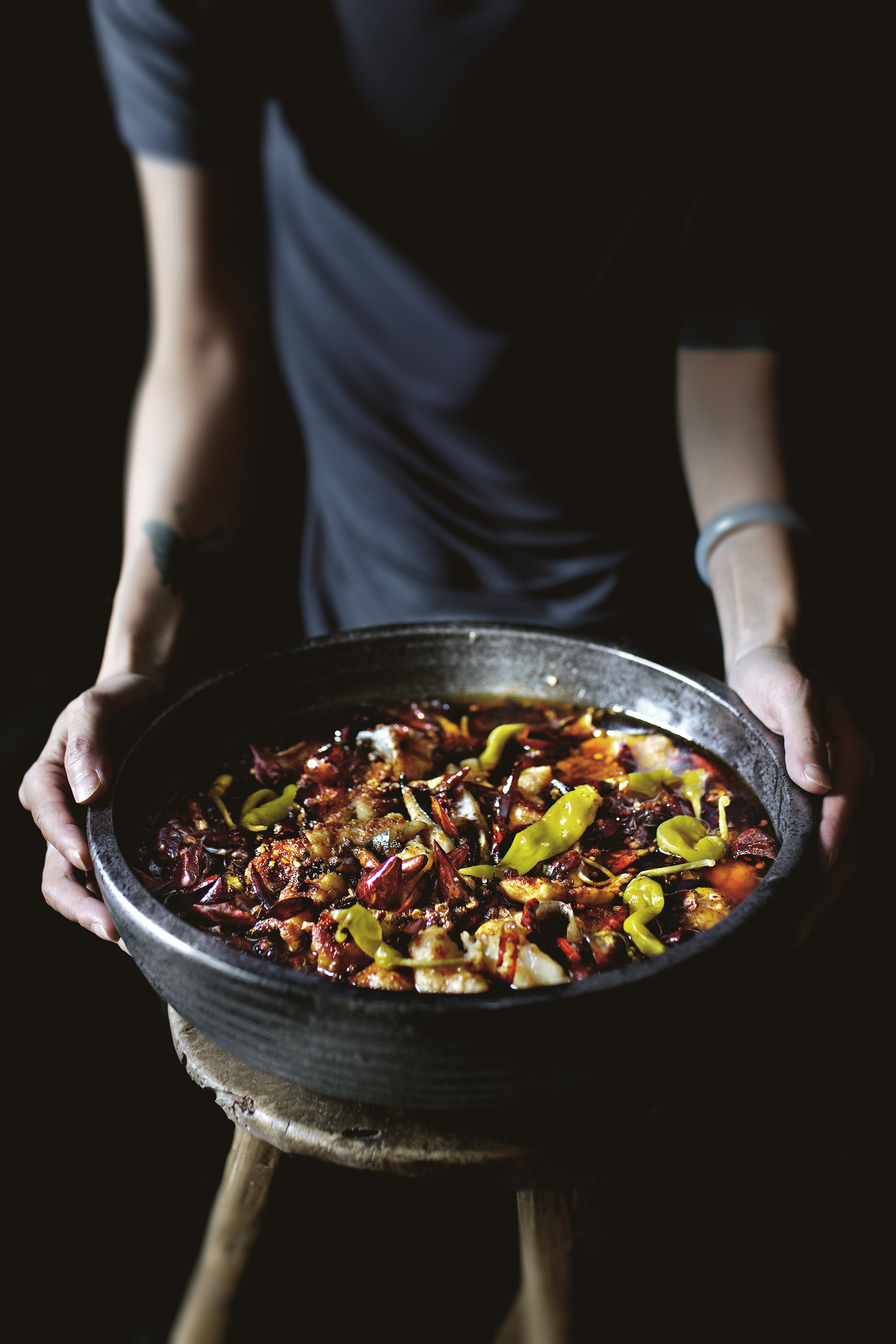 There are so many different recipes for this dish as the number of places that serve it. But here, I've came down to what I think most of us can pull off. Most ingredients can be found in Chinese supermarkets if not online. The dish has to be done in several different steps, so read the instructions and go through every steps in your head first. Familiarize with the recipe before you start so you won't panic. Read the NOTES, too.

There's absolutely no point using fancy/expensive fish for this dish. Catfish is traditionally the go-to variety, because they are fatty, meaty and cheap. I'm using a type of catfish called BASA from Vietnam, and they can be easily found in the freezer section in Asian supermarkets. If you can find fresh catfish, by all means. It's also better to keep the skin on no matter what kind of fish you use, because it prevents the slices from falling apart. Avoid flakey fishes like tilapia because they might fall apart.

Chicken powder is absolutely crucial, ok? You cannot find this dish anywhere in China without the trace of chicken powder. And even if you did, you were probably wondering why it was lacking. It has MSG, yes. Get over it.

"Toppings" for this dish is typically just bean sprouts (with maybe thick glass noodle made from tapioca). I added a few more but you can totally change it to what you like (ramen noodles, maybe?).

When buying dried chilis, smell them. They should be pungent, intense and aromatic. If they don't smell like anything they won't taste like anything.