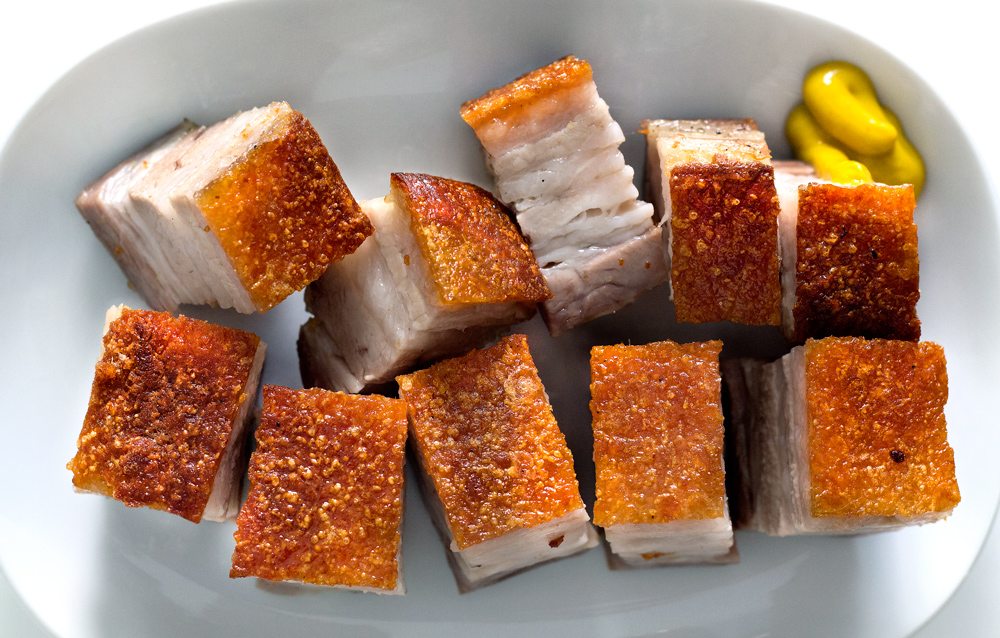 On the 20th of May 2013, I made a recipe that up to this day, more than a year later, still haunts me. It was a glorious, beautifully crafted specimen of pork belly confit, originally created by the Thomas Keller of whom I almost always, agree with.

There was nothing fundamentally wrong with it. The belly went through long hours of brining process before taking a hot-fat-tub bath that was equally as elaborate, then it went on to sit through an overnight pressing procedure… for reasons I followed without asking. Then, finally, 24 hours later in this excruciating climb to climax, it was sent into a skillet to fulfil its actual purpose – to form a golden, perforated crackling from the skin. The final torching of a caramel crust, although not from the original recipe, added a nice and thoughtful crunch and sweetness to the overall score. Like I said, there wasn’t anything fundamentally wrong with it…

Except that it was just too damn, unnecessarily complicated!

OK, you’re right. For those who only stop by once in a while, I’m evidently not someone who, by principle, seeks kitchen-shortcuts. I receive considerable amount of twisted pleasure from fiddling with obsessive cooking behavior I mean, I have an entire section named “Got nothing but time” (which I do) for crying out loud. But the premise is that the extra fusses should always be because a) it’s absolutely necessary by science (like fermentation), or b) it actually saves the overall effort by doing so (like leaving something to roast overnight). I guess all I’m asking for, the pole that I’m curbing my insanity to, is that the time and effort spent are not for some minuscule, or sometimes, undetectable differences. And I’m afraid that in the case of pork confit, I’m gonna have to prove myself right by proving myself wrong.

BEHIND THE PORNOGRAPHIC MASK, IS PURE UNADULTERATED PORKINESS 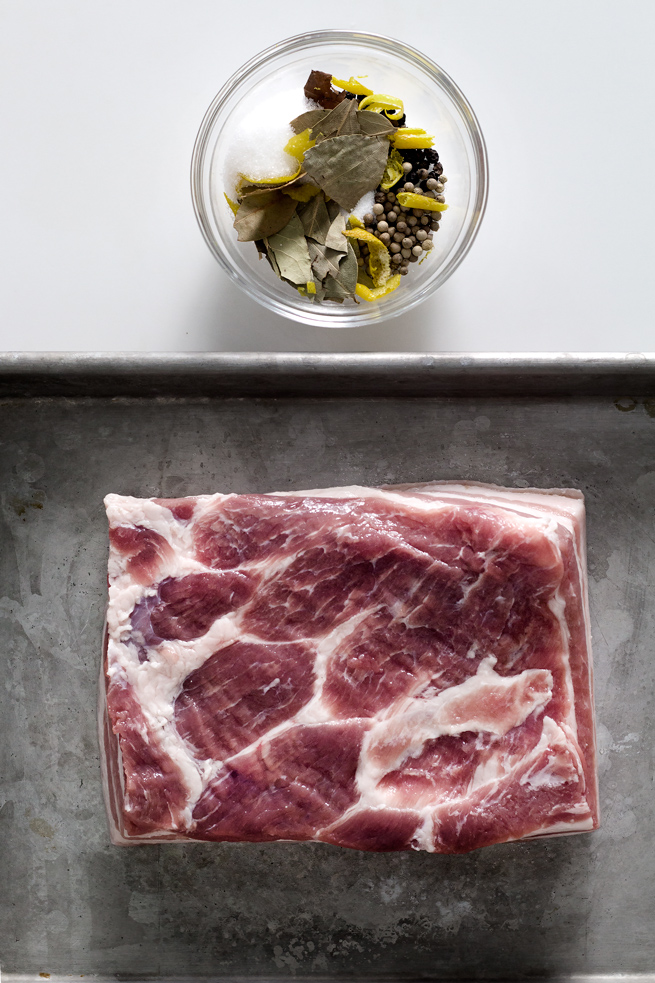 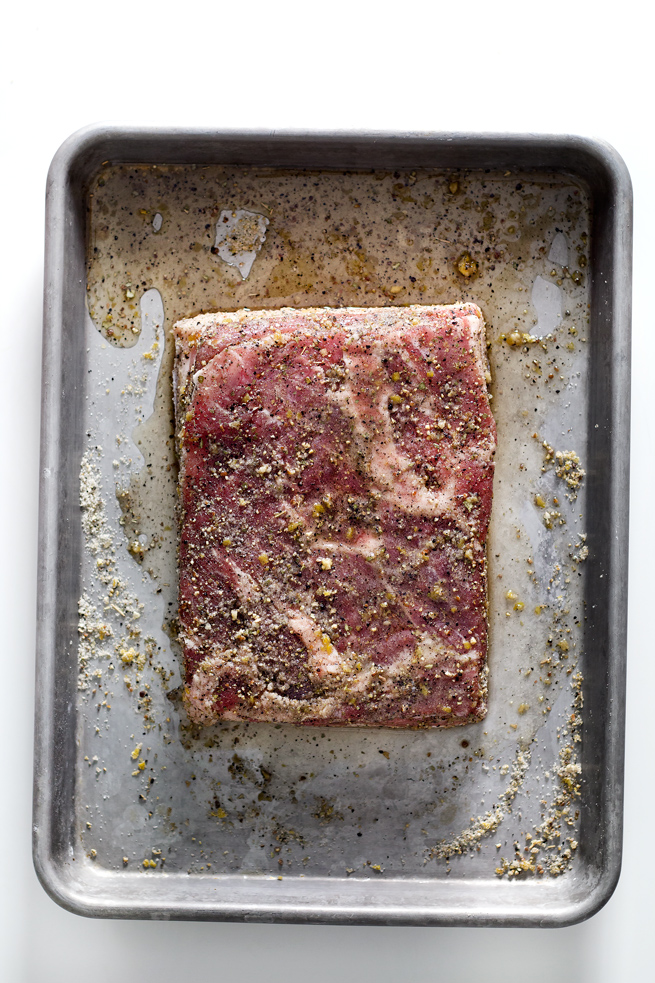 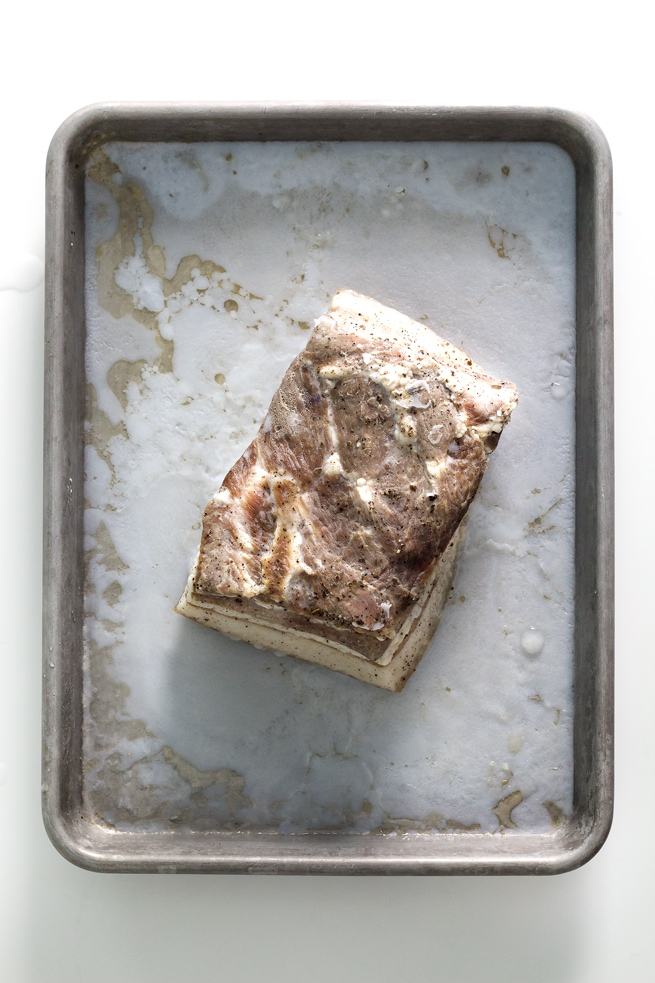 I guess it’s helpful to first clarify that all the ruckus wasn’t about “pork belly confit”. It was originally intended at producing what’s in my mind, one of the very few that qualifies as, a perfect definition of pork.

Siu (roast) yuk (meat). You’ve all seen it – Cantonese roasted pig, hanging whole in all its magnificence behind a greasy, steamy glass-window from a Cantonese restaurant in any China-town. Its entire elongated and salty torso is suited in a shimmering, blindingly golden jacket of crispy, perforated crackling skin. The dish is chopped to order and among all the tasty treasures this glorious beast has to offer, is the crown jewel of siu yuk, and that is siu (roast) nan (belly). It is specifically the more expensive, more hawked over part of the belly with the optimally 5 intersecting layers of glistening meat and fat. The sticky soft parts melt as the crackling explodes, behind its pornographic mask, siu nan is a flush of pure unadulterated porkiness, and we’re not talking about pornographic Crazy sex and high definition streaming, just pure meat. Profoundly simple and uncomplicated perfection.

And turned out, the process of making it should be just as.

So now, coming back to my first, less simple attempt of making siu nan at home. First and foremost, the No. 1 of vain effort was the brining and the confit-processs (cooking meat submerged in its own fat or oil). Hey, let’s not forget that this is a fat-laden, self-sustaining piece of cut that embodies the true virtue of forgiveness. Unlike other mortal, leaner cuts such as briskets or duck legs, pork belly is saint-like. A cut that will not get mad at you because you so clumsily undercooked (bouncy and fatty), or overcooked (melty and gelatinous), let alone needing to be submerged in more fat. Instead of 6 hours of brining and 4 hours of slow-roasting in fat, the result would not be much different than if you just do 2 hours of salt-rub marinating and another 2 hours of roasting, by itself, at a slightly higher temperature.

Then there was the pressing… oh the fucking overnight pressing… Completely unnecessary. Yah yah I know I said that “it has to be pressed” in order to get a marble-like flat surface of the skin to be evenly blistered, but as it turned out…

A couple hours of chilling just to firm up the meat for clean trimming is all it needs. OK fine! Hell you can even skip that if you are wondering how much easier can trimming get? (it’s… it’s the laser-straight, laaaser-straight edges that I so SO mentally need, you know…). But of course, we wouldn’t need to have this argument if we’re talking about having the convenience of prepping ahead for the big dinner party tomorrow. Chilling overnight, two birds with one stone – check!

Now finally, for all you fellow labor-junkies who thrive on pure caffeines and building warships out of cakes and buttercream, your high-time has come. The only, actual work of this entire recipe is the 5 minutes of perforating the skin-layer with a bunch of wooden skewers, and 20 minutes of standing by the stove and watching so diligently as the skin blisters and crackles in a non-stick skillet over low heat… Then there’s nothing left to stop the sticky parts melting, and cracklings exploding…

Sorry fellow kitchen sickos. This one is that simple. Next time we’ll build the Death Star out of frozen spinach, ok? 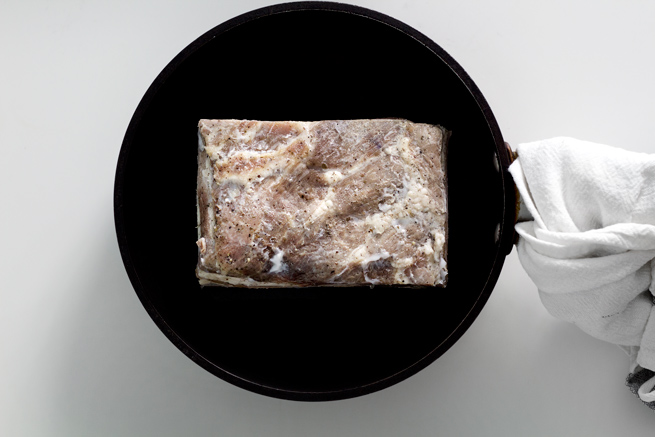 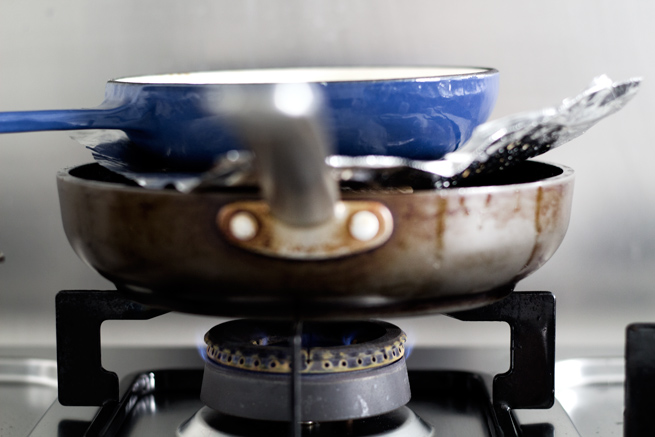 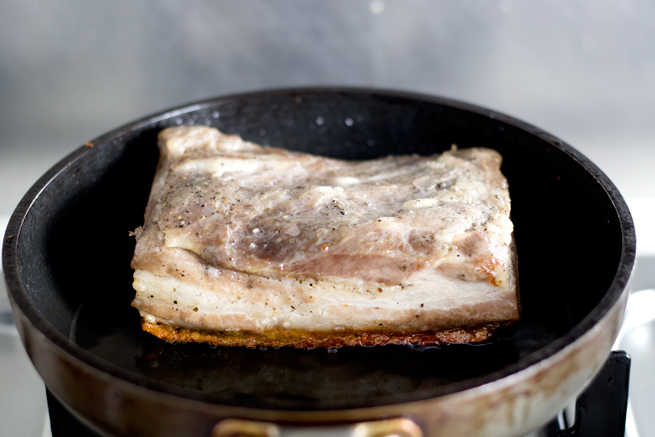 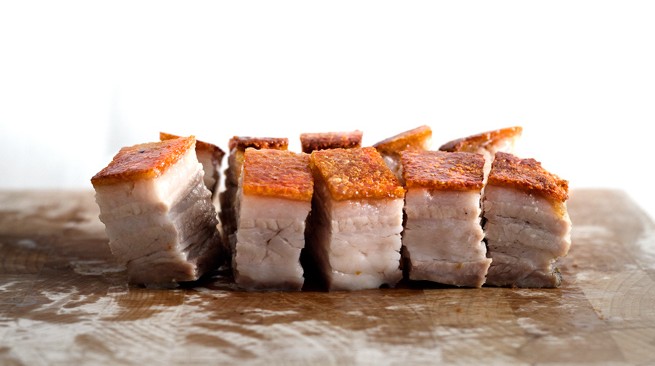 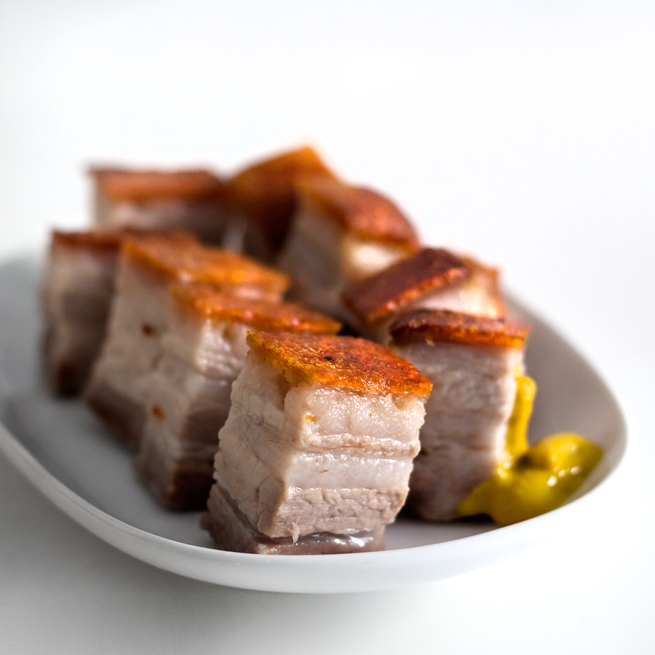 When you choose your pork-belly, it’s important to pick the part where there’s optimal layering of meat and fat. It goes without saying that the better quality of the pork, the more porkiness and aroma will be in the end result. That is something that cannot be added through seasonings or techniques. So choose good pork.

This recipe is really, really simple. It only reads long because I’m trying to include every last details that might help you achieve the perfect result, but I mean… this dish pretty much can’t be bad. I’ve once under-blistered the skin which gave me a golden crispy crackling-layer with a little bit of sticky and gelatinous skin underneath. Does that ever hurt anybody? And I’ve also once left the belly in the skillet, forgotten… for like 30 min, which gave me a mildly burnt but super crispy crackling. I mean is that the worst thing to eat in the world? Two hours in the fridge for marinating, two hours in the oven for roasting, leaving you with only 20 minutes of actual work by the stove and during which, you pretty much don’t have to do anything.

* Everything up to “blistering the skin” can be done up to a few days ahead.

To marinate the pork-belly: Pulse salt, granulated sugar, lemon peels, bay leaves, black and white peppercorn in a spice-grinder or blender until coarsely ground. Place the pork-belly in a baking-sheet then rub the salt-mixture evenly on all sides of the pork belly. Let sit in the fridge for 2 hours. In the last 30 min, preheat the oven on 300ºF/150ºC.

To cook the pork-belly: Rinse off all the salt-mixture from the pork-belly and the baking-sheet, then place the belly back into the sheet skin-side down (to keep the skin layer relatively flat). Cover tightly with foil then roast in the preheated oven for 2 to 2:15 hours. The meat should be tender that a small knife can be easily inserted, but not falling apart. Remove the sheet from the oven and let cool for 30 min, then chill in the fridge for 1 hour (skin-side down still) until firm (for easy trimming). Everything up till now can be prepared the day ahead.

To blister the skin: 30 minutes before serving, carefully remove the pork-belly from the baking-sheet. Take a look at the cut-side and get familiar with the anatomy of the belly. The skin is a very obviously translucent and darker layer apart from the white, opaque fat-layer underneath. Then grab a big handful of wooden or metal skewers, evenly and thoroughly, make tiny punctures through the skin down the the top layer of fat. Instead of random jabbing, move systematically from left to right/top to bottom. The skin should be soft and easy to puncture without too much pressure. The more thoroughly and densely the skin is perforated, the more crispy and delicate the cracklings will be. 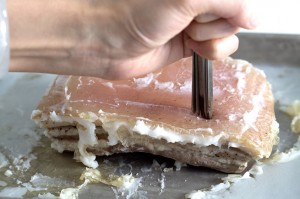 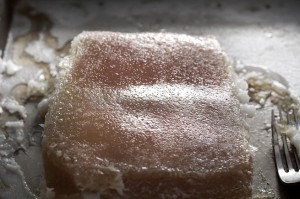 (Updated 2017/11/21: slight change on cooking time) Heat a non-stick skillet over medium-high heat, then place the belly skin-side down in the center of the skillet. Cover with a piece of foil just big enough to leave steam-holes around the edges (this prevents splattering as well as warming the belly as it cooks). Once you hear sizzling sounds, turn the heat down to LOW. If your pork-belly does not have a flat and leveled skin-surface, you can apply weight (I used a small cast-iron skillet) where it needs it for the first 10 min. We want the entire layer of skin to be thoroughly blistered without burning, which is a process that will take no less than 20 min, up to 30 min depending on the thickness of the skin. You can check by uncovering the foil and look if the entire thickness of the skin-layer is blistered through (if not, you’ll see a translucent layer attached to the crackling).

The meat should be warmed through after the skin is properly blistered, so there’s no need to flip.

To cut/serve the pork-belly: Place the belly skin-down down, then with a shark knife, cut through the meat part by zig-zaging the knife, then once you get to the skin, simply press the knife down with swift and firm pressure. Cut the belly into small cubes and serve with yellow mustard, or on rice drizzled with sweet soy sauce. 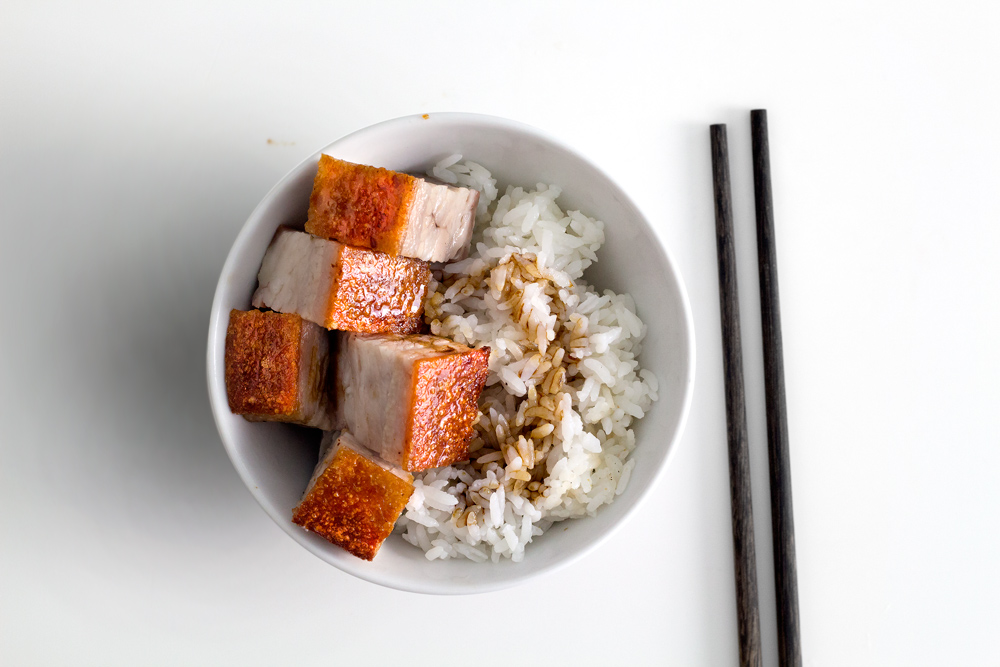