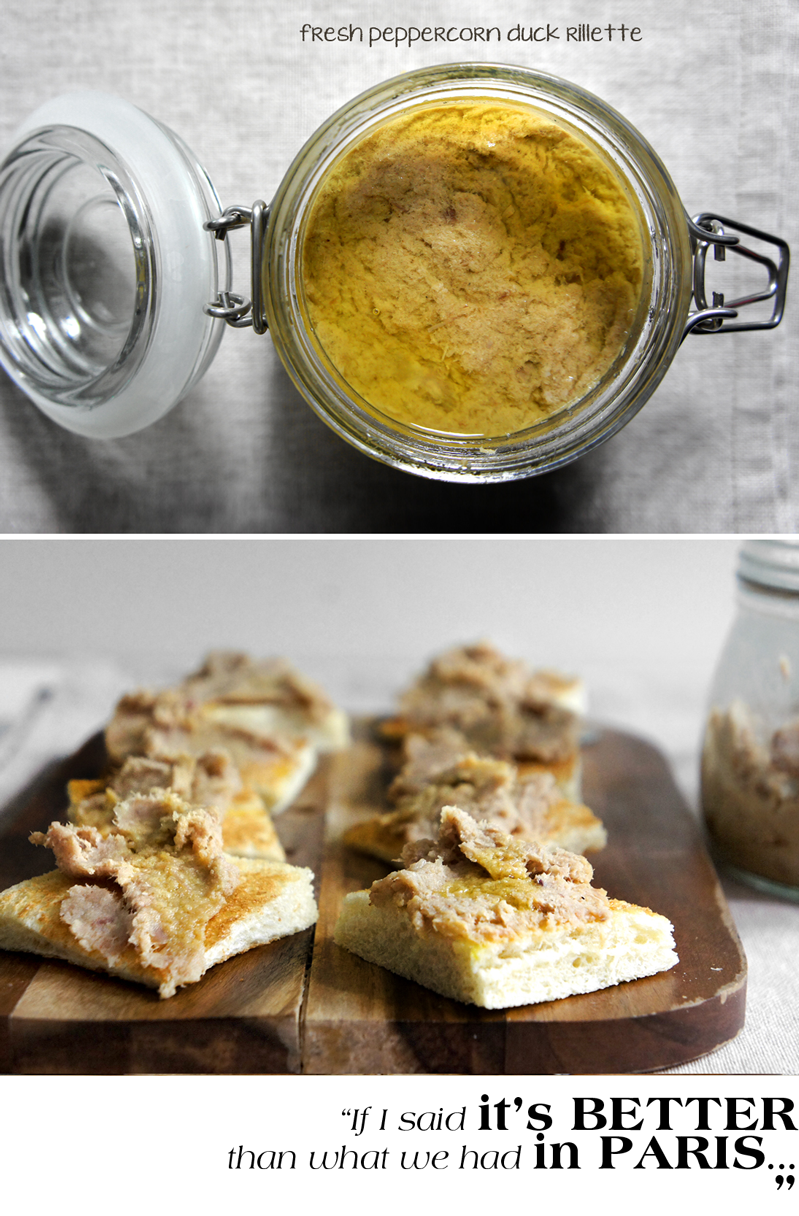 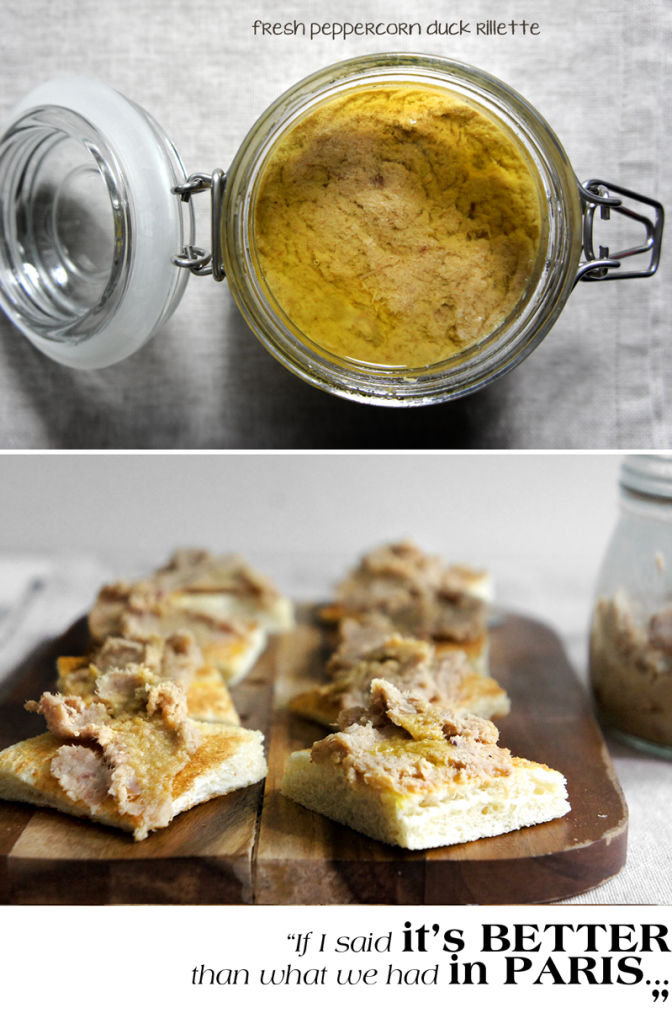 The other night during my thrill-less routine of midnight internet-surfing, I came across an article about the mysterious effect of mind has on physical wellness.  You know, happy people healthy life kind of thing.  (By the way Hello, my name is Mandy and I’m a hypochondriac.  Those who are just here thinking there’d be “better-than-Paris” duck, feel free to skip and scroll right to the bottom…).  So volunteers were gathered and tests were conducted.  In a nut shell, I was diagnosed by the article as the kind who are biologically doomed, incapable of being happy under meditation and will be a sag of meat dripping negativity for the rest of my life, which as far as effect-of-mind-on-health goes isn’t gonna be a long one.  It’s settled.  I will live short, and whimper. 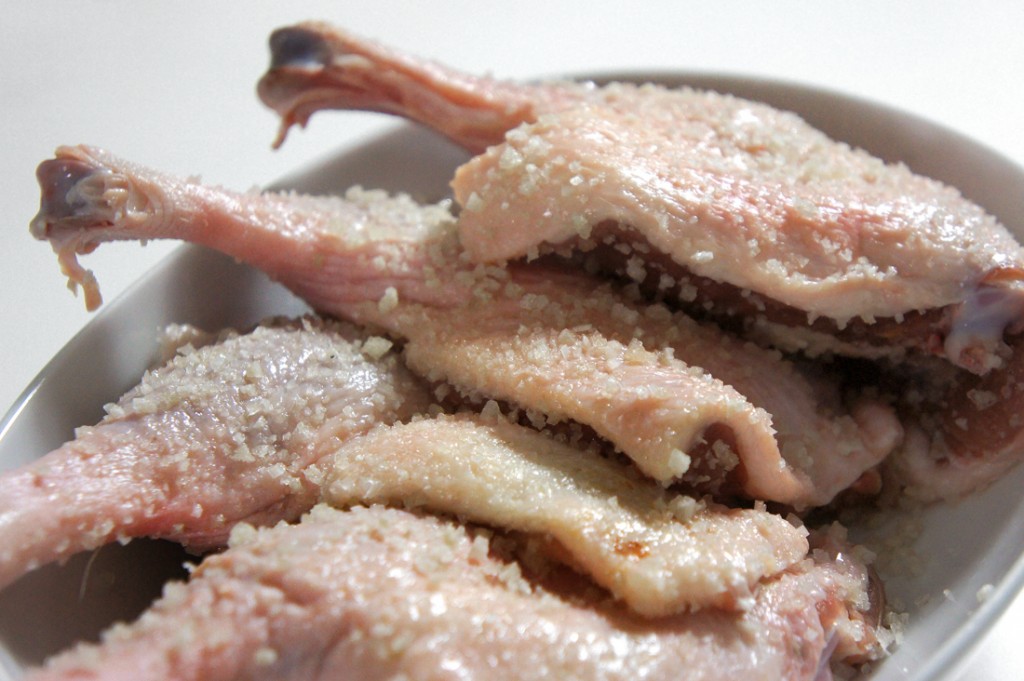 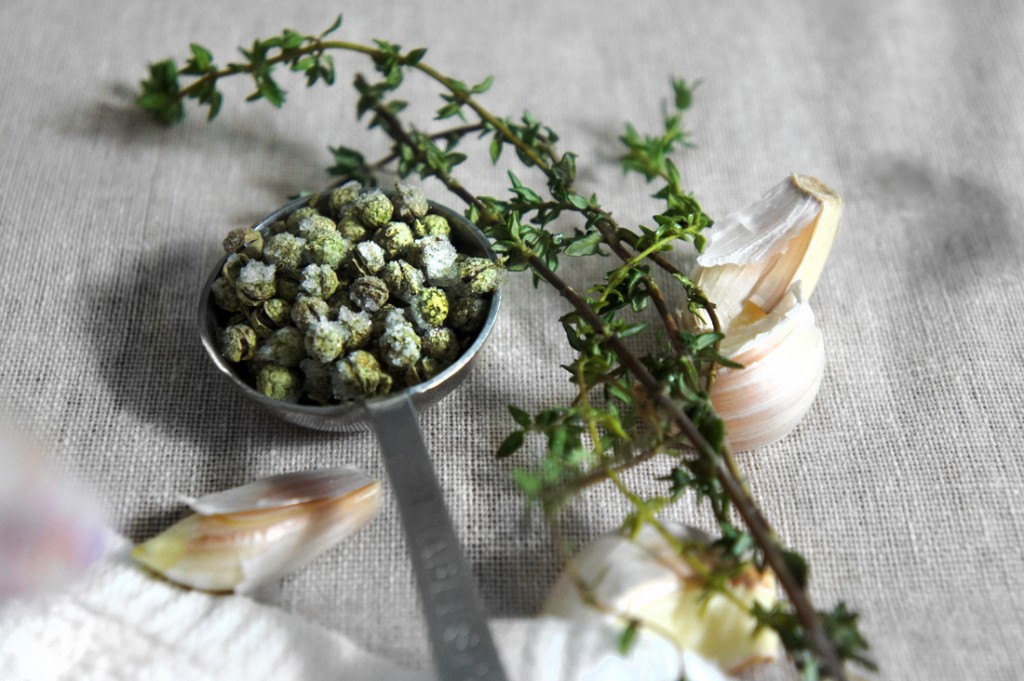 Life is amazing… as the window of hope for longevity closes, it opens another (maybe I’m not a pessimist after all).  You know as they say – short life → enjoy the moment  → therefore indulge in creamy ducks.  Wait, that sounds wrong.  You wouldn’t normally put the word “creamy” and “duck” together, would you?  I mean it’s weird, sounds absurd.  Like it’d put a cork in your artery (it may be correct on that note).  But believe it or not, “creamy” and “duck”  is possible.  More accurately, creamy meat.  I discovered something called “rillette” from Thomas Keller shortly after my rude awakening last September, which is a genius creation from a little Far-far-away named France (great foods… chic people, can’t believe nobody knows about it…).  It’s one of those “DUH!” culinary moment for me.  Meat is confit-ed as in cooked in its own fat, moisture extracted and replaced with more fat, until rendered down into a purity of concentrated and compact meatiness, THEN whipped into a creamy paste in.. yes, its own fat.  Just the sheer number of “fat” mentioned is enough to give a vegetarian heart attack. 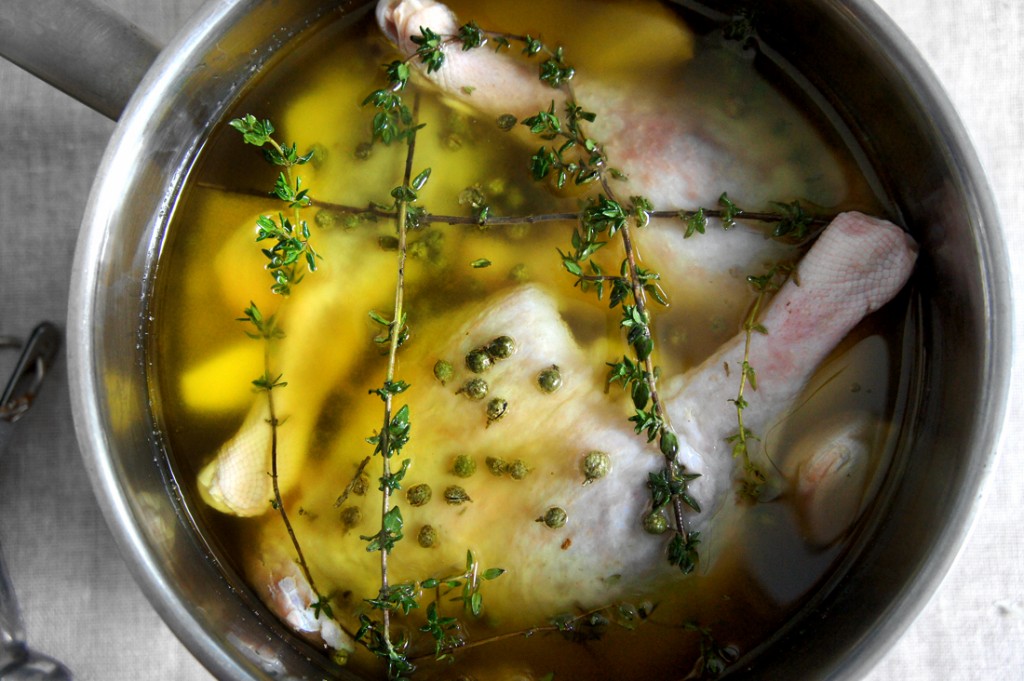 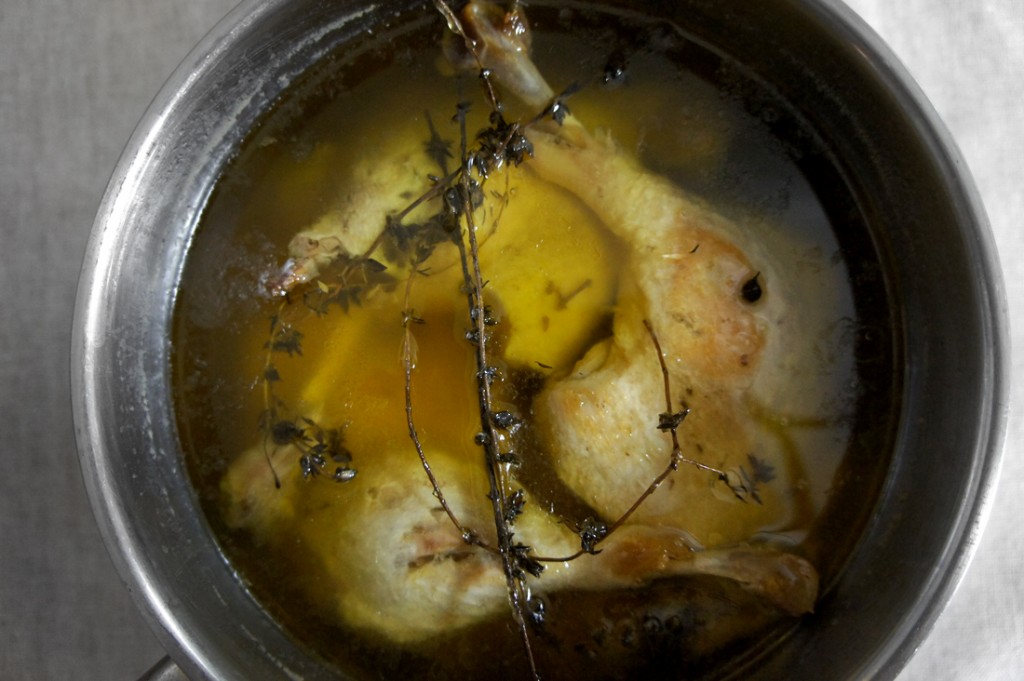 Goes without saying that creamy duck can and should be anything BUT indulged in large quantity.  But since I had an emptiness to fill, I experienced with an unhealthy number of rillettes in the following month.  There was the Spanish-paprika-pork version… then the Southeast-Asia-lemongrass-chicken version, and then this duck version flavored with fresh peppercorns.  Believe me when I say it’s better than what we had in Paris.  For the entire October, I used it to fill my grief and the hollowness inside which leads me to a discovery – grief and calories are recipe for a larger pants-size.   A whole year later, the remnant of that month’s recklessness and my waist-line has still yet to part.  This recipe will produce approx 4 cups of rillette which fills 2 medium-size jars.  I suggest making the second jar an excellent holiday gift because it’s dangerously… or don’t.  Because life’s too short. 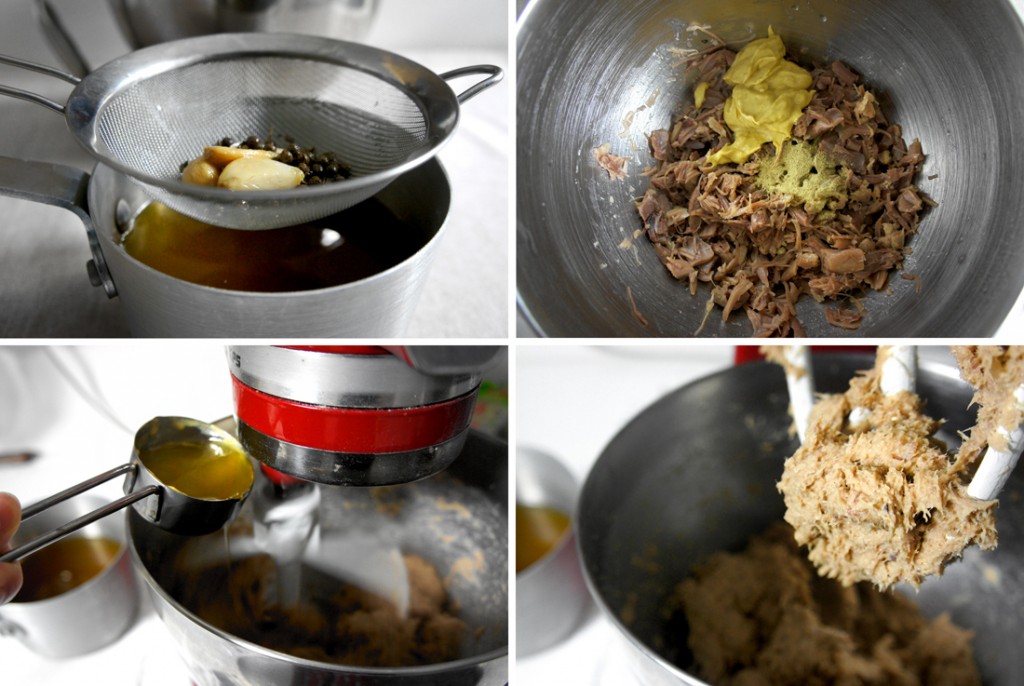 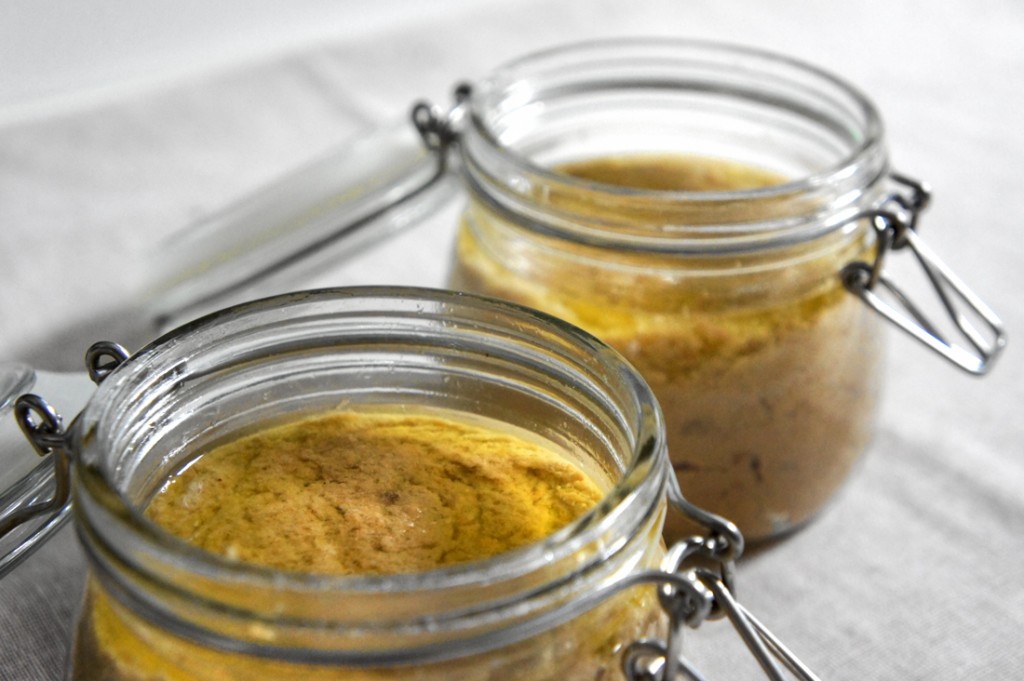 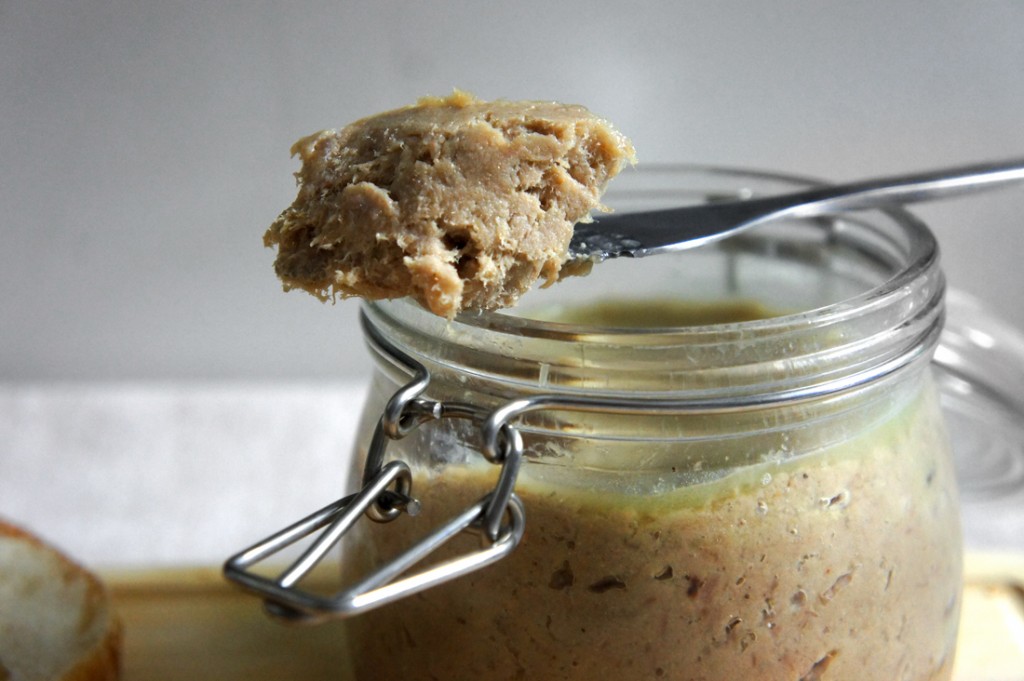 * I couldn’t find fresh bay leaves here so I didn’t include it.

** To extract duck fat, cut duck skins into small pieces and fry in a pot without any other added oil.  Fry until the skins shrink and give out all its fat.

To confit the duck legs.  Pulse coarse sea salt and fresh bay leaves in the food processor until blended together as “green salt”.  Wash the duck legs and pat dry.  Rub the green salt all over the duck legs and make sure every surface is covered.  Lay them flat and separated on a tray and refrigerate for 24 hours.

After marinated and sort of “cured”, you could discard the liquid that was drawn out of the duck legs and wash them under water to rinse out all the salt.  Pat them VERY dry with a clean towel, and place them in a deep and narrow pot that’s just big enough to hold the duck legs in diameter.  The more tightly you pack the legs and the less empty space left in between them and the pot, the less oil you’ll need to have them submerged.  Scatter the peppercorns, thyme and garlic into the pot.  Pour in the duck fat (if you don’t have enough duck fat, you could substitute partially with olive oil) until all the ingredients are submerged by at least 1/2″ or 2 cm.

Put the lid on, and bake in the oven for 3~4 hours until the meat has completely pulled away from the knuckle, and a fork can be easily inserted without any effort.  Take the pot out and let it cool down to room temperature.  Carefully remove the legs without breaking it, then strain the fat through a sieve into another container.  Many recipe would tell you to leave the the duck legs in the fat and refrigerate it.  But I find it very difficult to separate the duck legs from the cold fat so here’s what I do.  I wrap the duck legs very tightly with plastic wraps to prevent drying-out, then refrigerate the legs and fat separately.

The reason for refrigeration is because it’s better to work with chilled/cold fat in rillettes for a creamier texture.

Once the legs and fat are chilled, remove the meat and skin from the legs and discard all the bones.  Set the meat in a stand mixer with a paddle attachment.  roughly cut the meat into shorter pieces with a scissor (I find the muscle tissue in duck leg to be quite stringy.  Roughly cutting it produces better texture in the rillette).  Add 1/4 cup of Dijon mustard, ground white pepper and 1 turn of freshly ground black pepper.  With the machine mixing on medium-high speed, SLOWLY SLOWLY start adding in 3/4 cup of duck fat.  Do this 1 tsp at a time in the beginning and increase the amount after mid-way.  The mustard and the fat has to form a beautiful emulsion.  If the emulsion breaks, the rillette will taste greasy instead of creamy.

Once 3/4 cup of duck fat is completely incorporated, I stop the machine and taste-test it.  In this case the duck legs are slightly larger than usual, so I ended up adding 2 tbsp more of mustard and duck fat.  The mark is that the rillette should be soft and moist, not dry and craggy.

Transfer the rillette into air-tight containers.  Try not to include too much air pockets.  Pour a thin layer of duck fat on top to seal it (in this case it has to be pure duck fat otherwise it wouldn’t solidify) and refrigerate it for at least 1 day.  Keep the rest of the duck fat for next confit (some liquid usually comes out of the duck during cooking which should be “gello-ed” once chilled, and thus easy to separate from the fat). 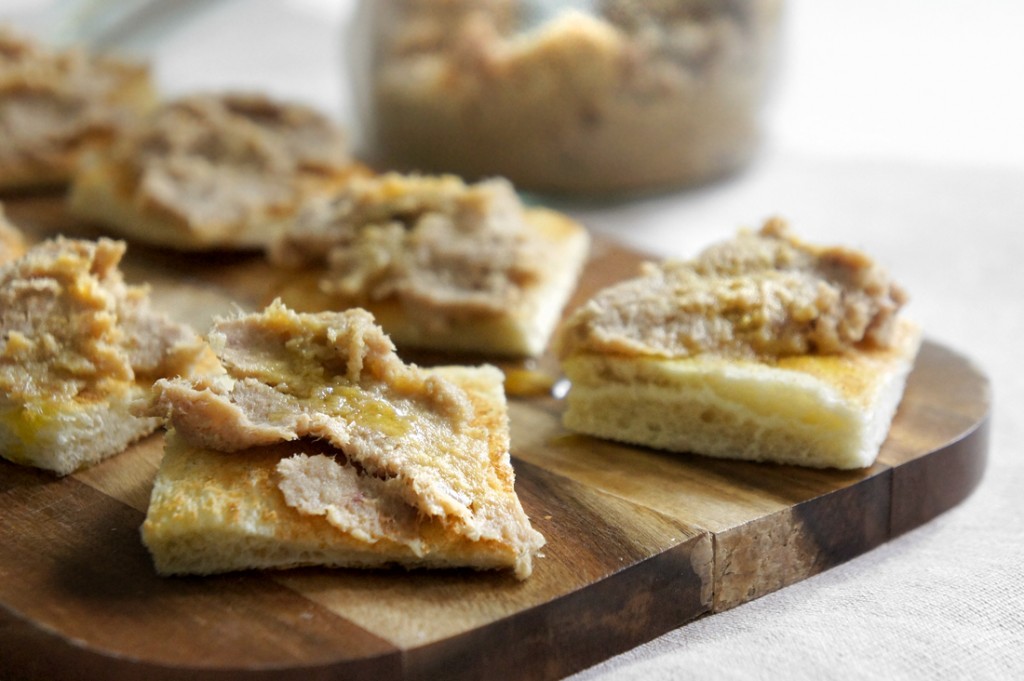