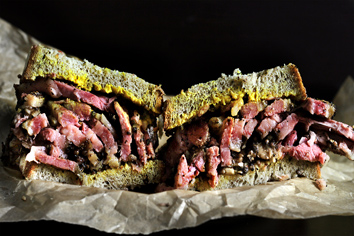 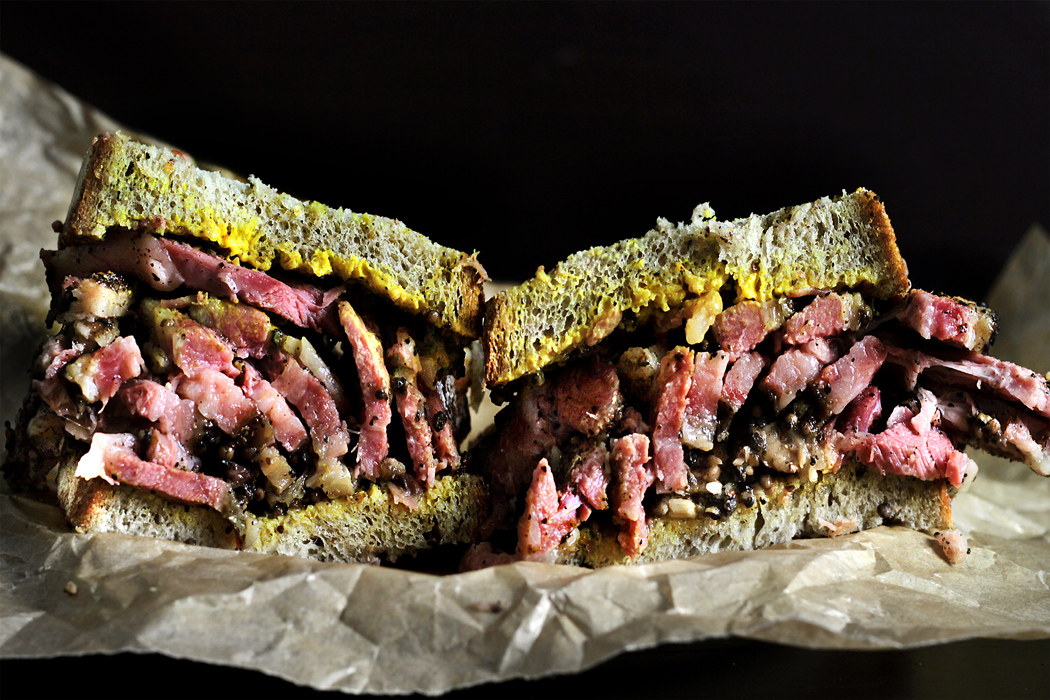 “There’s New York. There’s Montreal. THEN THERE’S THE REST OF THE BARREN WORLD WITHOUT THIS SMOKY PINK”

(My subconscious eagerness to share this may have caused me to accidentally publish it before saying anything… By the way, WordPress, if you’re reading, a “confirm publish” pop-up may be quite useful you know) Uhem… so, where was I?

There are two types of carnivorous Earthlings in this cosmos. One who has been blessedly graced by the acknowledgement and transformative tevilah of a truly, truly great pastrami. And one who unknowingly misunderstands it as being overrated. Before stepping a foot in New York, I couldn’t care less what a chunk of weirdly pink, muscularly dry and cold Jewish staple would taste like in between two pieces of woodboard-rye, but then of course, Katz got my tongue at the age of 21. Before stepping a foot in Montreal where they can’t even get bagels right, I couldn’t care less what us Canadians have to say about a warm, spiced-up version of pastrami they call “smoked meat”. Then I again stood humbly corrected at the heel of Schwartz a few years later. Life since, has never been the same. 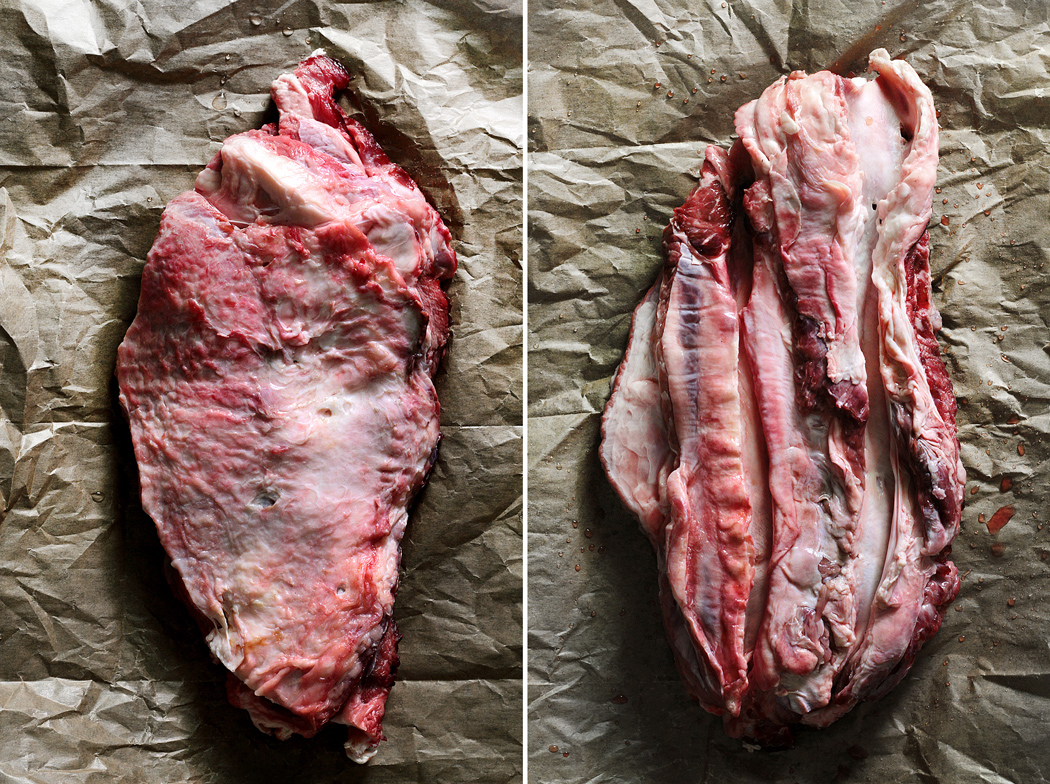 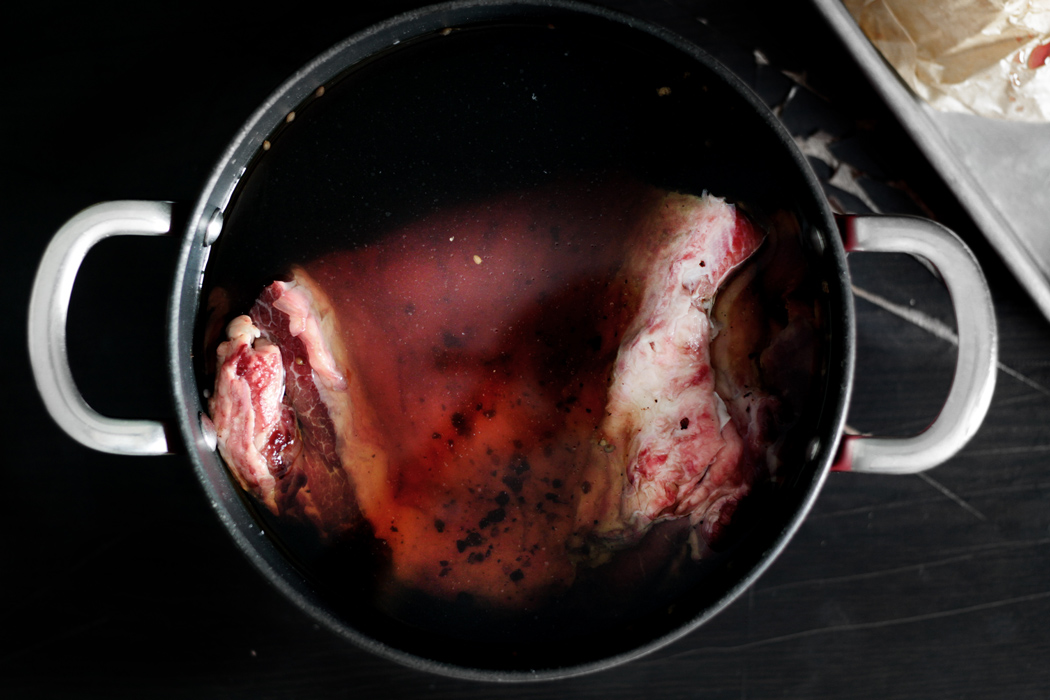 If you have ever been touched by the light of pastrami-gospel, you better make sure that you stay inside it because such enlightenment could backfire when you move to a place where there is none, which is to say, shit, everywhere else. Five years ago I left pastrami-land, and started to see the hidden side of reality stripping itself naked from my previously blissful ignorance. Without it blindfolding my appetite, I’m haunted by the pastrami-vacancy that I didn’t even know was there. I now realized that there’s New York. There’s Montreal. Then there’s the rest of the barren world without this smoky pink.

But I never took an action beyond bitter resentment and a trip down memory lane. Sure I have heard of false prophecies of adequate delis here and there, but the possibility to find a just-as-good pastrami or smoked meat elsewhere in the world, is instantly severed by good senses and a dose of snobbishness. Such complex didn’t drive me into the kitchen to forge my own either, because the idea of making smoked meat or pastrami without a smoker or a Jewish grandmother for that matter, felt preposterously moronic. Offensive even. I’ve tried to learn more about options I could use, such as electronic smokers (a friend of mine’s had some great luck with these lately) or even the oven smoking method, but I was too worried of filling my apartment with smoke from lack of understanding. Plus, being a genetically wired doubter, I’d like to think I have respect for artisans.

Until yesterday, I stood correctly again, by myself, 13 years after my first encounter with a true pastrami. 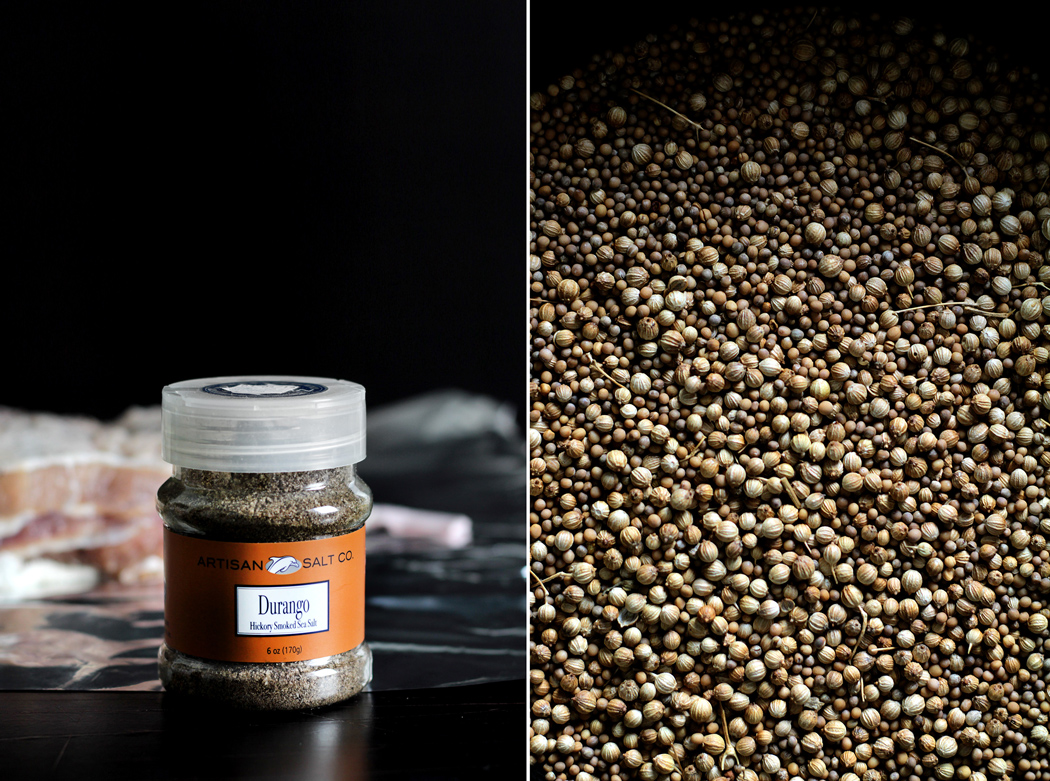 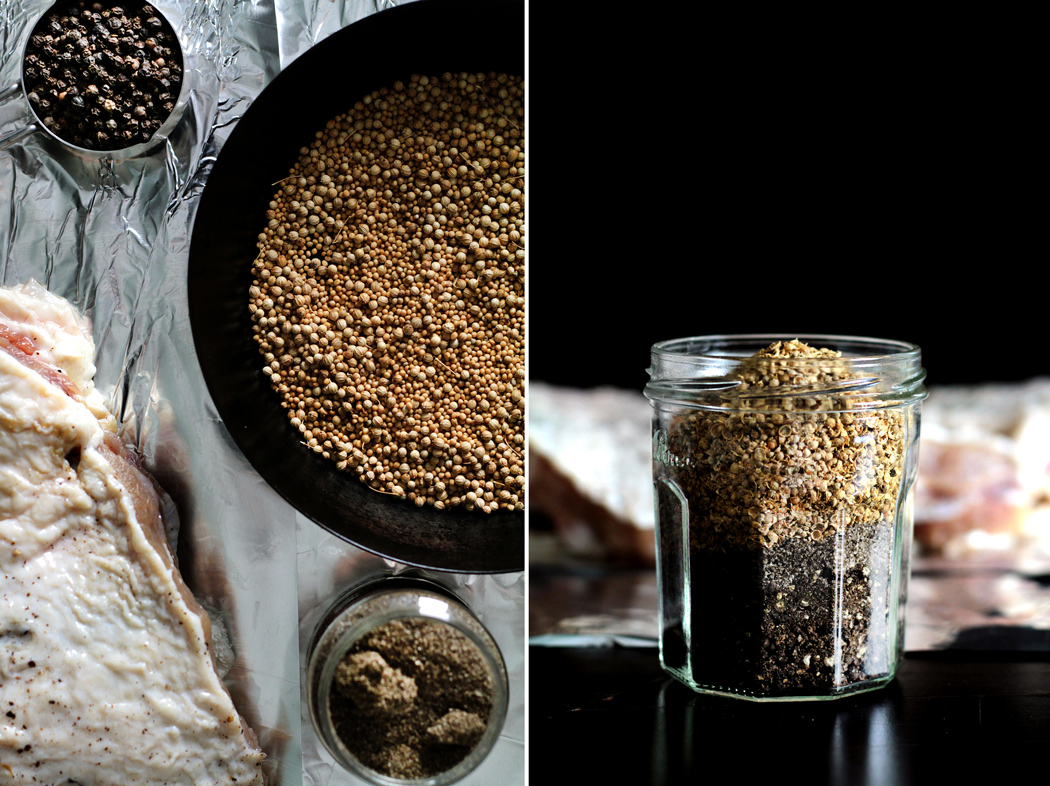 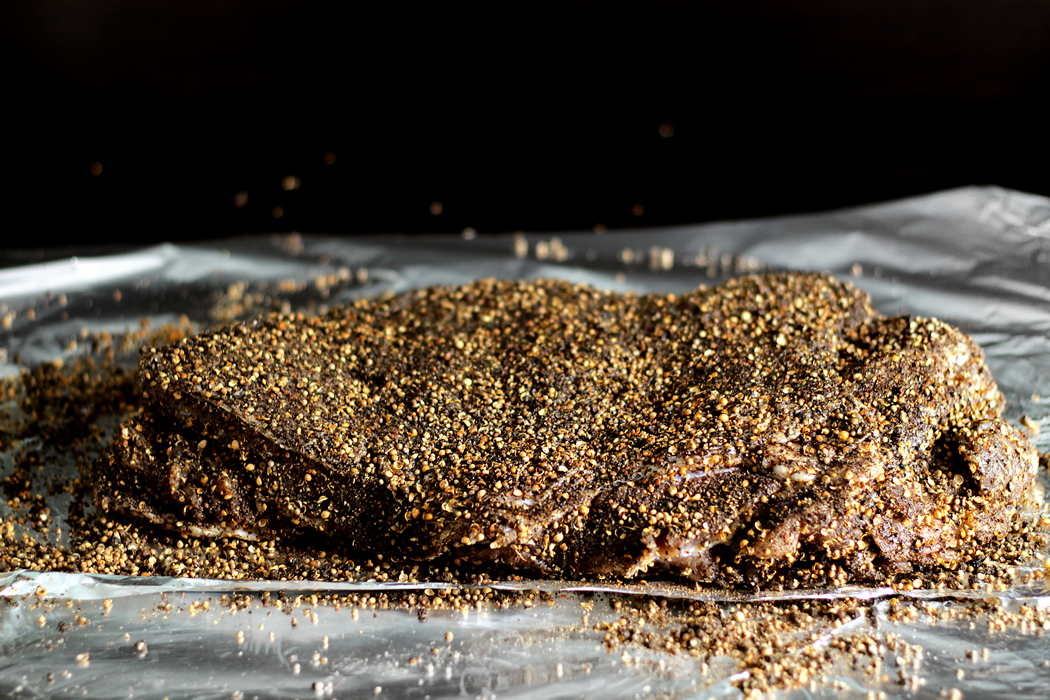 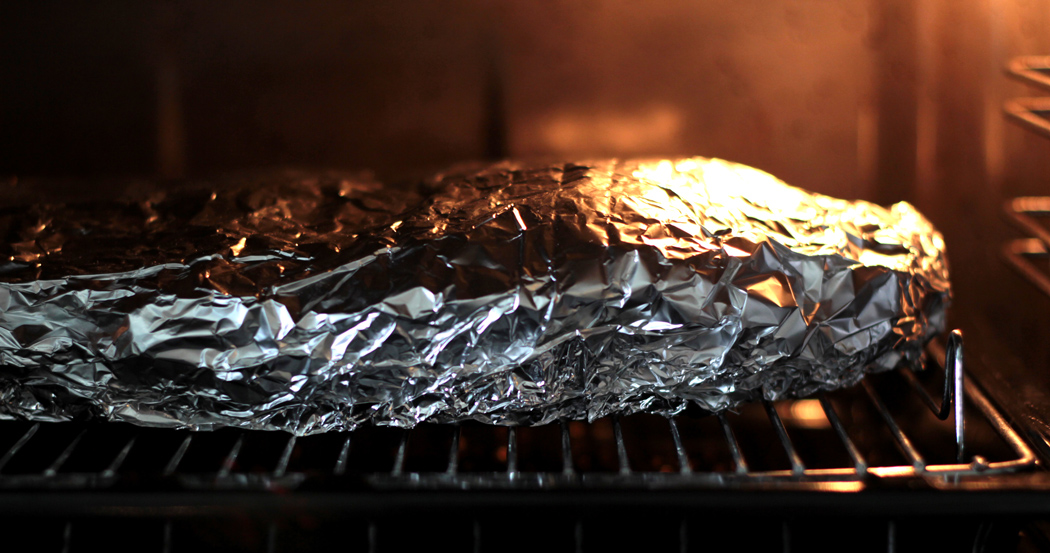 A couple years ago, when I was herding my boredom aimlessly through the fields of a gourmet food store in Hong Kong, I heard a voice… OK, fine no. I simply spotted a plain box of hickory smoked sea salt sitting on its bright-lighted, commercial and non-mystical isle. The house-plants section just next to it wasn’t on fire either. See, a sign from the above should always be so comprehensive and straight-forward I always say. Anyhow, an idea came to me, in combination of a pastrami recipe I read on the Charcuterie -bible, that I could theoretically reduce the amount saltiness in the meat-brine with a combination of kosher salt and smoked salt, then boost with more smoked salt as part of the spiced-crust as a cheat-way to introduce smokiness to the meat without smoking. Just hypothetically, you know, an idea to sit on for the next 3 years to come because us doubters normally act carefully upon speculation.

Until last night, the cosmos decided the time was ripe. I put my task in action. 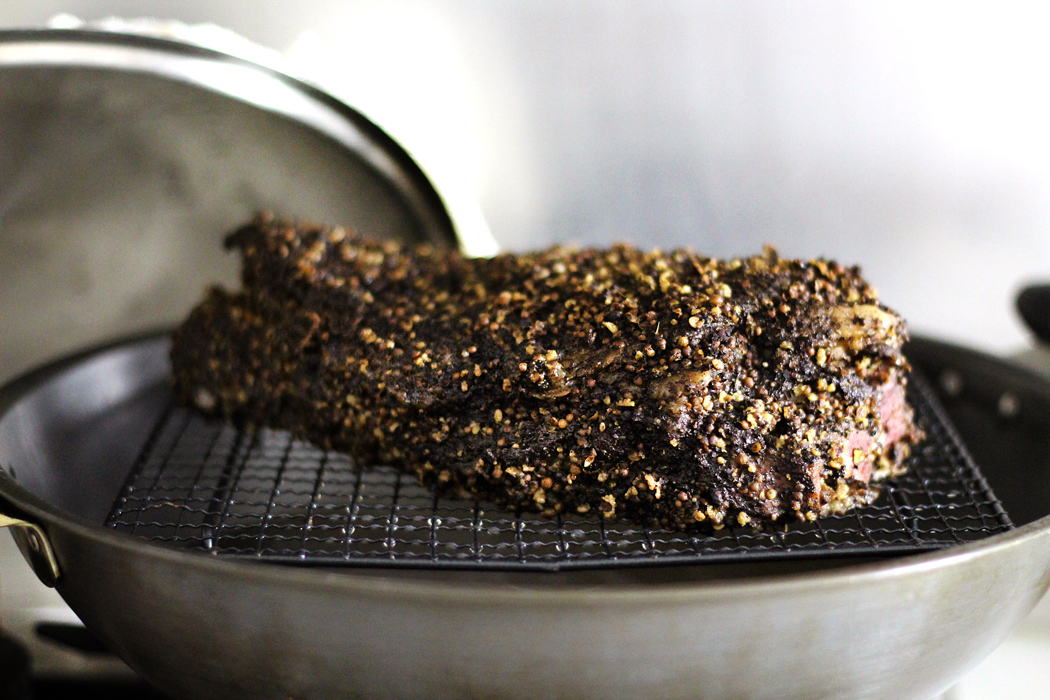 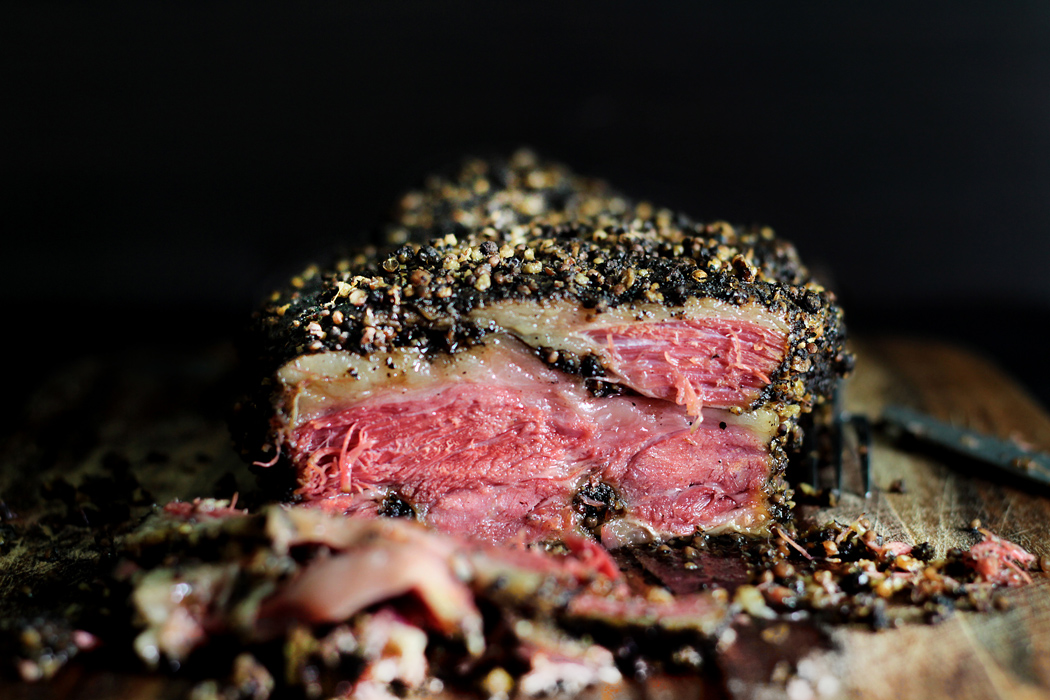 This, guys, this tasted, fucking unbelievable it was almost miraculous. A pile of sticky, melty, cured heaven far beyond the borders of pastrami-holy land. It was like the pastrami-God and I leaned forward and touched fingers. The smokiness wasn’t aggressively pronounced – as it shouldn’t really be anyways – but unmistakably there. If anything, a few final sprinkles of smoked sea salt on top of the slices took it right where it should be. Best yet, even thought it may not look so, it was possibly one of the least gruesome, fuss-free work I’ve done in the pursuit of an impressive spectacle to be admired over, only requiring kitchen-skills such as boiling water and dry-rubbing spices, and perhaps the entire season of House of Cards to get you through the waiting-time.

I won’t even blame you if you’re sitting cautiously doubtful in front of your computer right now, as you should towards anything too good to be true. In fact, sleep on it, like I did. Because such destined calling needs time to mature. Then, for whatever reason when you decide to take the dive, expect the world atlas to change forever as mine.

From now on, there’s New York. There’s Montreal. And then there’s my kitchen. Potentially yours, too. 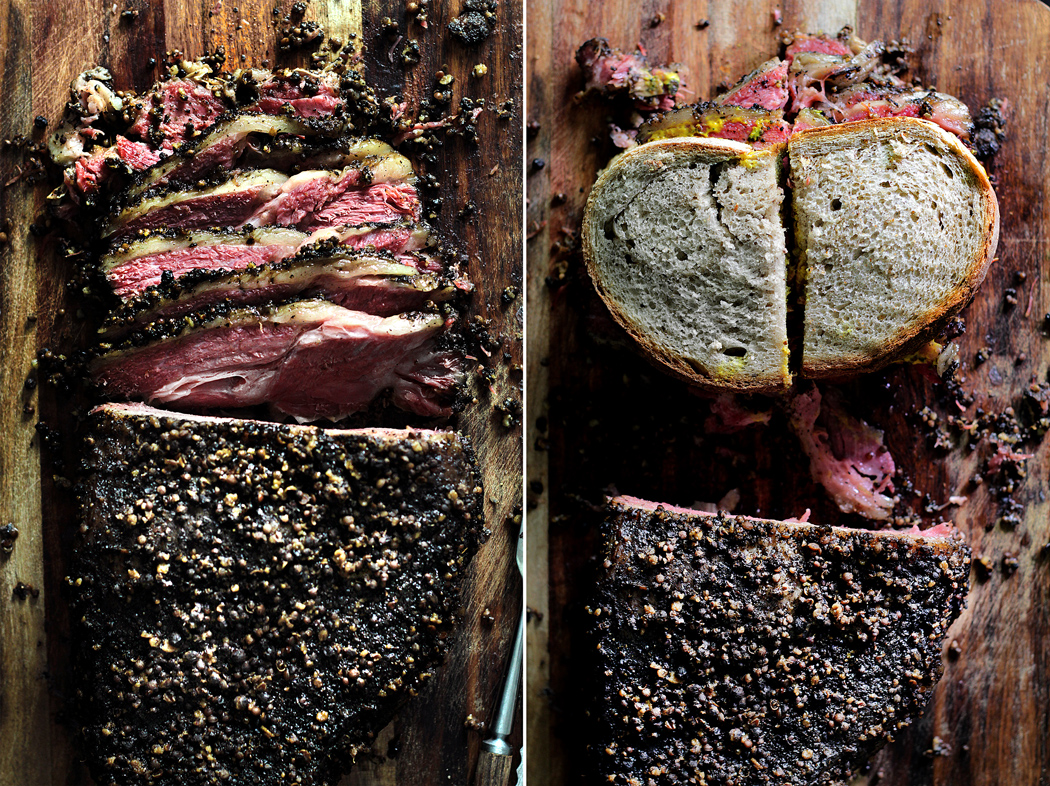 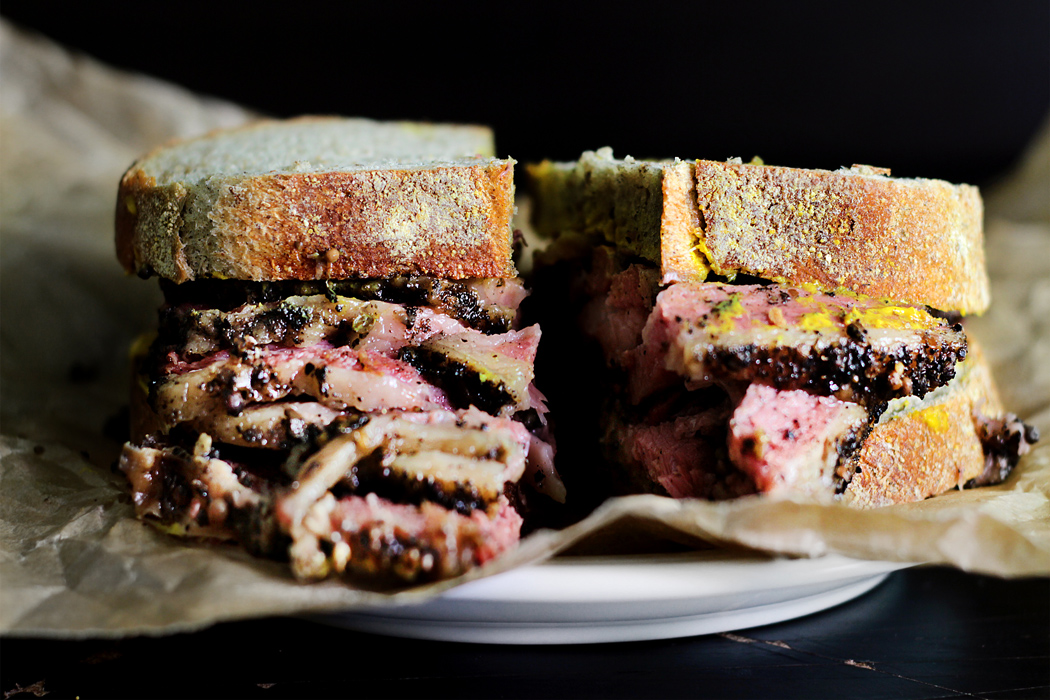 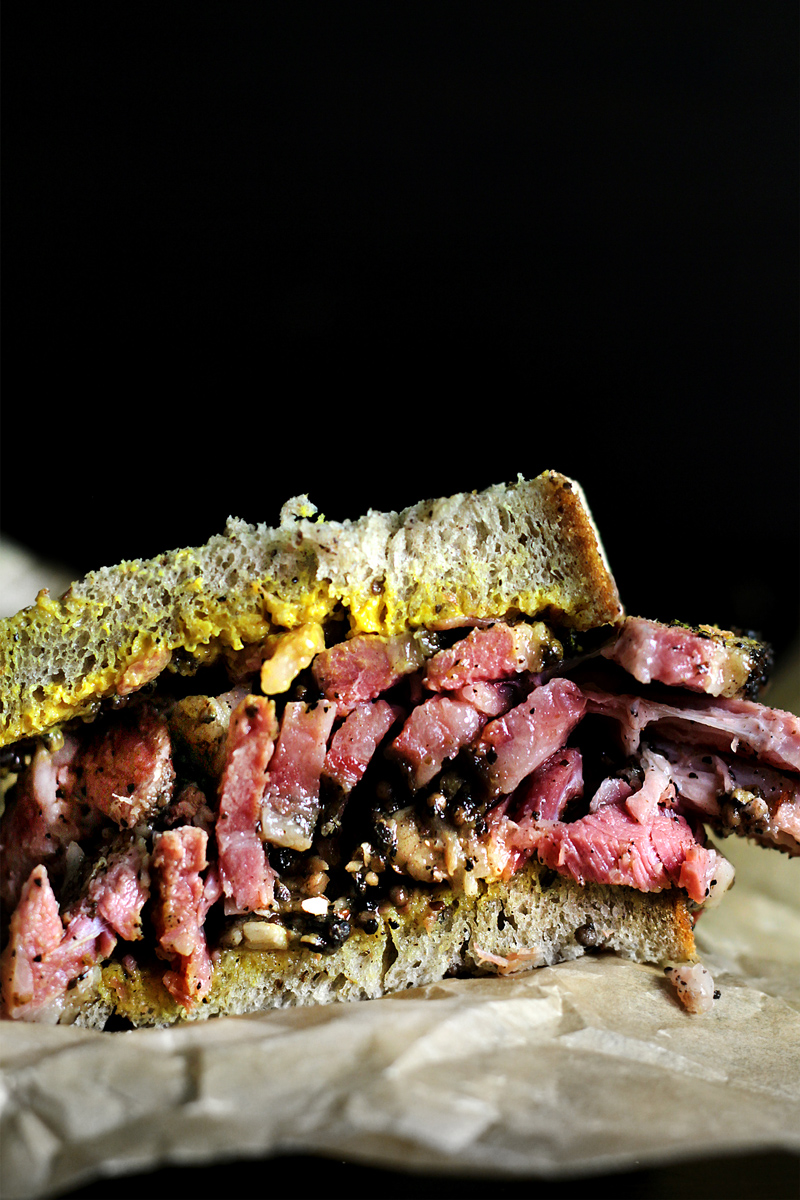 This recipe is more “smoked meat” than “pastrami”, more spiced-up and served hot or at least warm. Because… oh shit… here it goes. MontrealsmokedmeatisbetterthanNewYorkpastrami. There, I said it.

I’ve talked a bit more about pink salt/DQ curing salt/DC curing salt in the duck prosciutto post, and there are extensive details about it in the book. I understand that unfamiliarity can sometimes be intimidating, but if you are even just semi-serious about charcuteries, that’s the one thing you should keep in your pantry. Without going into details, you should know that its main purpose is to “prevent botulism poisoning”, which sounds like something we’d like to avoid, doesn’t it? Nowadays getting it takes nothing but a few clicks online and you’ll see it resting on your doorstep a few days later, not to mention that it keeps forever just like salt. So chop chop.

In Asia, there is no specifically separated cut as a “brisket”, which is usually left attached to the rest of the riblet scraps and connective tissues and sold as rib/chest-meat or niu-nan. In the first picture you can see these strips of meat and connective tissues where the rib-bones used to be attached to. This isn’t necessarily a bad thing. In fact, it’s fucking fantastic! These meat-scraps and connective tissues cook down to wonderfully sticky and gelatinous bonuses that only aid the pursuit of a perfectly moist pastrami. If you are able to get this cut, I would highly recommend it. If not, good old brisket would do beautifully.

To brine the meat (3 to 4 days ahead): If you are using store-bought pickling spice like I did and the seeds and berries came whole, just lightly crack the spices in a mortar/spice-grinder. Combine everything under the “Brine” in a large pot and bring to a simmer. Stir until the salt and sugar have completely dissolved, then leave to cool completely (in theory, if you have lots of ice-cubes to spare: you can probably start with 2.5 litres of water, then add 1 litre of ice-cubes later to speed up the cooling-time). After the water has completely cooled to room-temperature, submerge the brisket/rib meat (leave a good 1/2″ or 1 cm surface-fat attached) inside the brine, and put a plate on top to press it down if necessary. Cover the pot and let brine in the fridge for 3 days (some recipes say 2 days… so if you’re in a hurry).

To cook the meat (the night before):

6:00 ~ 6:10 PM – Make the spice crust: Toast the coriander seeds and mustard seed on a skillet over medium heat until they start to pop rapidly and smell fragrant. Coarsely grind them in a mortar or spice-grinder, then set aside. Coarsely grind the black peppercorns and add to the coriander/mustard seeds mixture, then finely grind the pickling spice and add it to the mix. Add the hickory smoked sea salt and mix evenly. You may have leftover of this mixture depending on the size of your meat.

6:10 ~ 6:20 PM: Rinse the brisket/rib meat under water (it’s ok if there are some spices sticking to it) and pad dry. Place it on top of 2 layers of heavy-duty foil, then apply a generous coating of the spice crust-mixture all over the meat. Press the mixture into the meat to help it stick if must. Wrap the meat tightly inside the foil and make a couple of slits on the bottom to drain excess liquid. Set over a baking rack, slits-side down, on top of a baking sheet. Leave over the counter for 2 hours for the meat to completely come back to room-temperature.

8: 20 PM ~ 8:20 AM the next morning: The meat will stay 12-hours inside the oven overnight, so plan accordingly depending on your schedule – say if you normally wake up at 8 o’clock in the morning (or 12 at noon…), then you should start the cooking at 8 o’clock the night before (uhem, or 12 at midnight…). Place the baking sheet inside the oven then just forget it’s there for the next 12 hours. There’s nothing to be done! Go watch TV… go to sleep… It’s not there. The next morning after 12 hours, just turn the oven off and leave the meat to cool completely inside the oven. Carry on with your day like it isn’t there.

To serve the faux-smoked meat/pastrami:

1 hour before serving: Unwrap the meat from the foil, then place it over a steamer-basket. I simply place a small rack inside a large wok, but you can do this in a proper steamer-pot of course. Fill the pot with 2~3 cups of water then bring to a boil on hight heat. Place the steamer-basket with the meat on top into the pot (without the meat touching the water of course), then put the lid on. Turn the heat down to medium ~ medium-low, and steam/re-heat the smoked meat for at least 45 min ~ 1 hour. Carefully transfer the meat onto a cutting board (it’s quite fragile at this point) and let rest for 10 min before slicing.

Serve an unapologetic pile of sliced smoked meat/pastrami, sprinkled with more smoked sea salt on top as preferred, in between 2 slices of quality rye bread smeared with yellow mustard. And believe.

To make your own pickling spice: from Charcuterie by Michael Ruhlman & Brian Polcyn

Lightly toast black peppercorns, mustard seeds and coriander seeds in a skillet over medium heat until you hear them popping. Lightly crack them in a mortar/spice grinder and mix with the other ingredients. Keep in an air-tight container until needed. 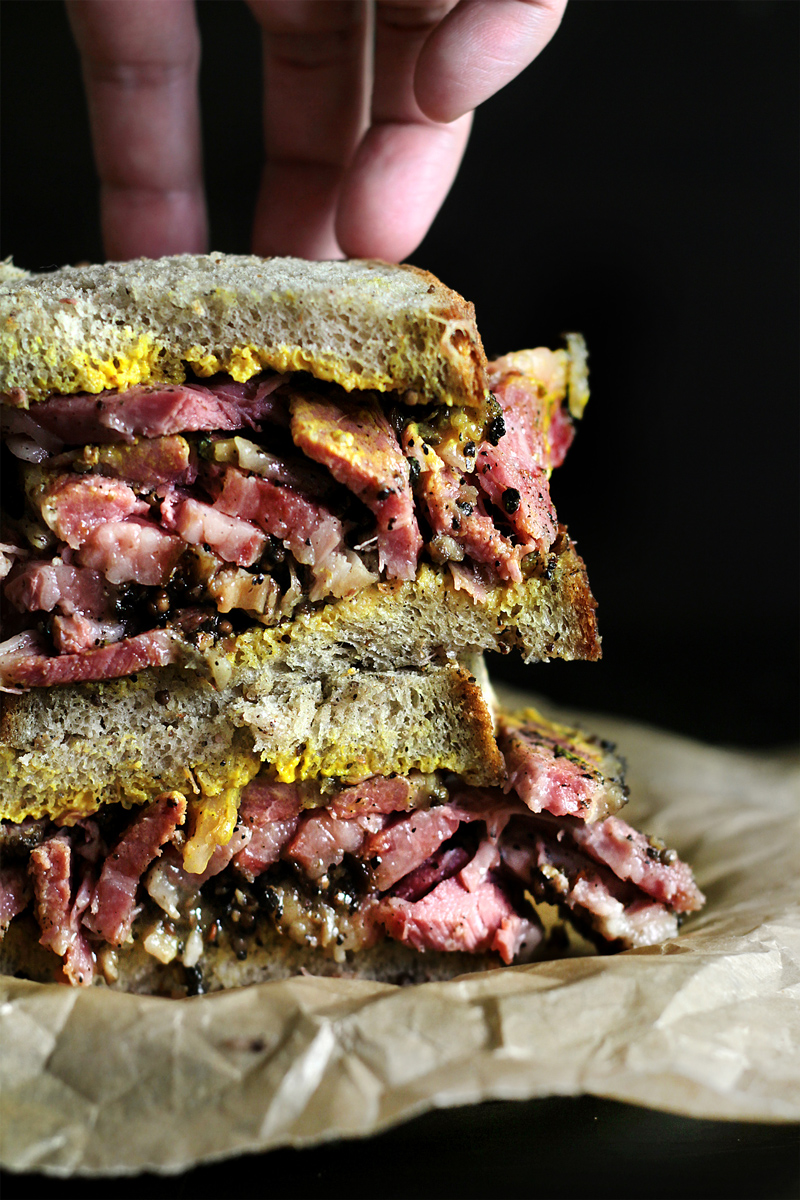 MOLLY YEH'S WEDDING PIE
To Roll, or Not To Roll
Do Right By Stuffed Peppers