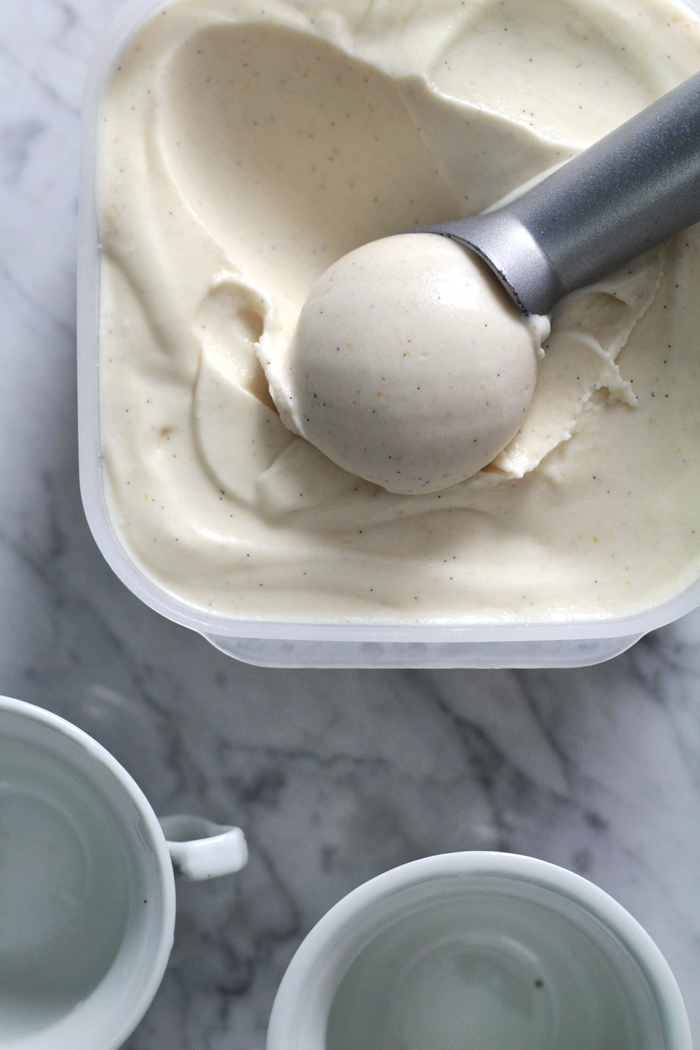 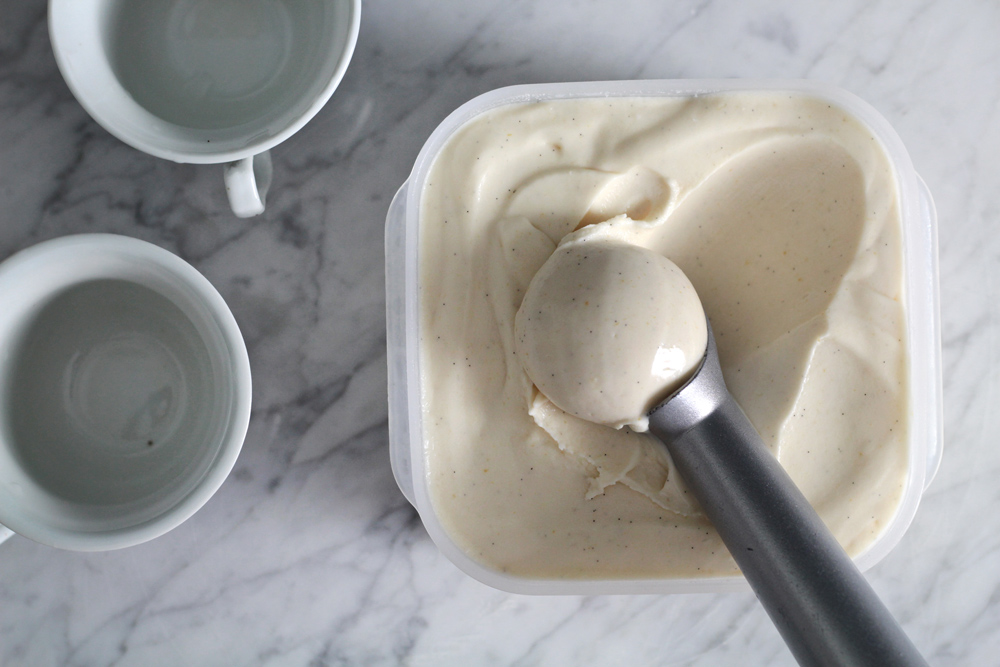 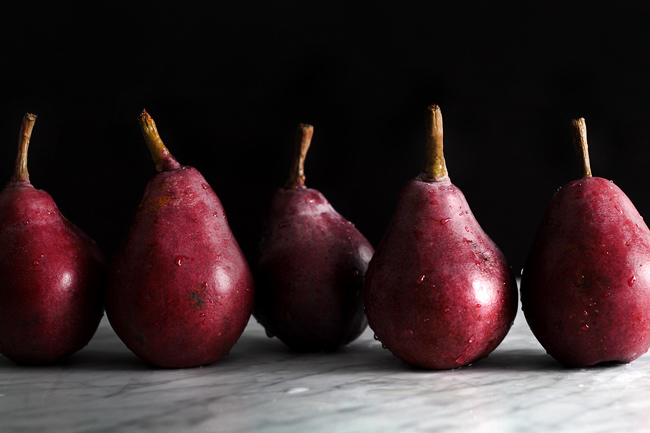 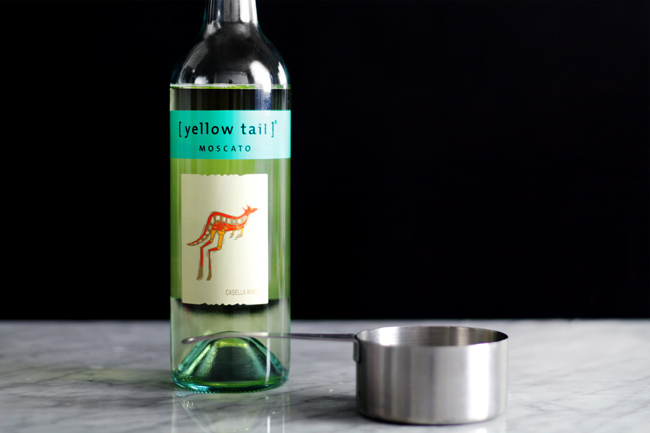 TYPICALLY, this is where I enter the room, neck stretched and knuckles cracked, oozing a bit a creepy calmness to suggest the looming turbulence, and ghostly hovers over the keyboard…  Inhale…  Then screeeech, obnoxiously, on the worst, ever! weekend-getaway from hell, carrying a Dumpling that was dangerously “soupy” and could burst and leak out at any minute!

But… exhaaaale… I’m not gonna go there.  Not gonna complain.  My negativism is very bored with my discontent.

Instead, I’m going to, for just one day, do the thing that… you know the thing, the thing that happy people do.  Right, to bring you only the bright side of life, with teethy smiles, flowers, breezes, and above all else, happy gelato and all.  And not just any gelato, but can I just say, one of the tastiest I’ve ever had, too.  Hey, I said I promised you bright things.  But even with the promise not to go Gibson on you, it is impossible, from a literary point of view, to give you a complete narrative of this recipe without mentioning its less celebratory beginning.  After all, it was a collateral payoff of the disaster itself.

So let’s fast-forward through the theatrical tragicomedy .  To cut it short, on the way home with a crippled spirit and minus four friends, the story brought me to a roadside fruit-stand which I was certain, giving my trickling “chi” lately, to be the final K.O. of my demise.  But NO.  Well… yes and no. 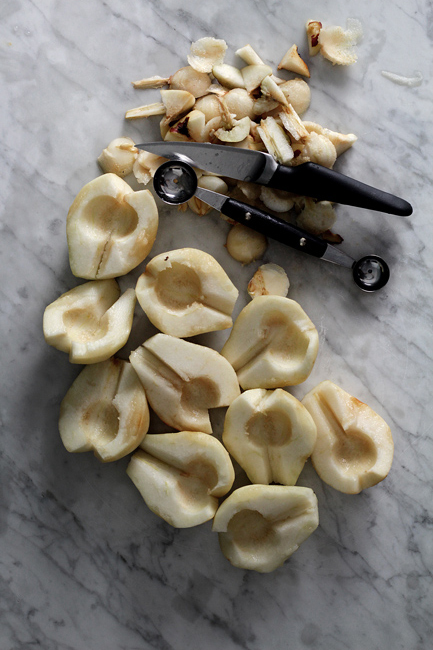 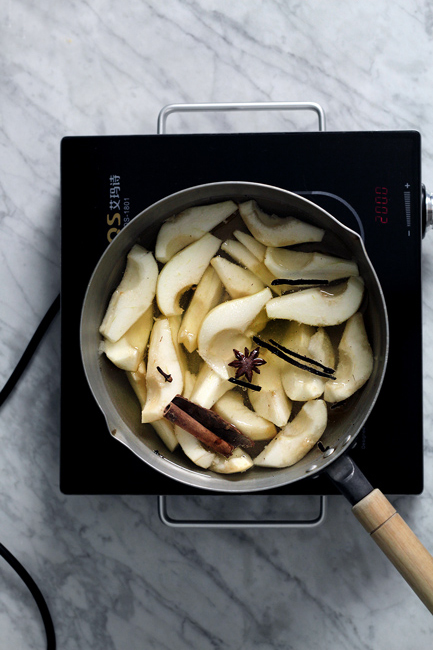 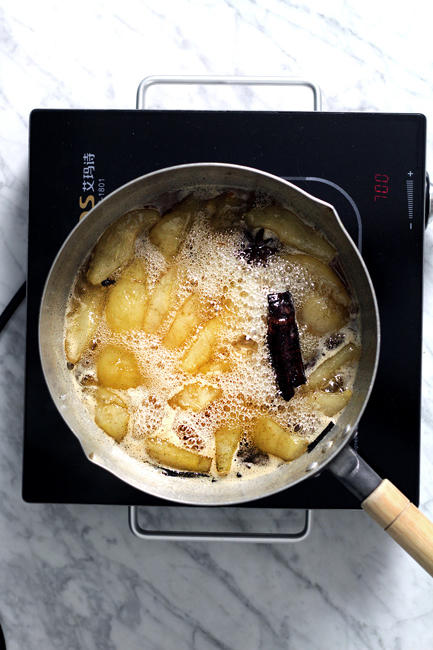 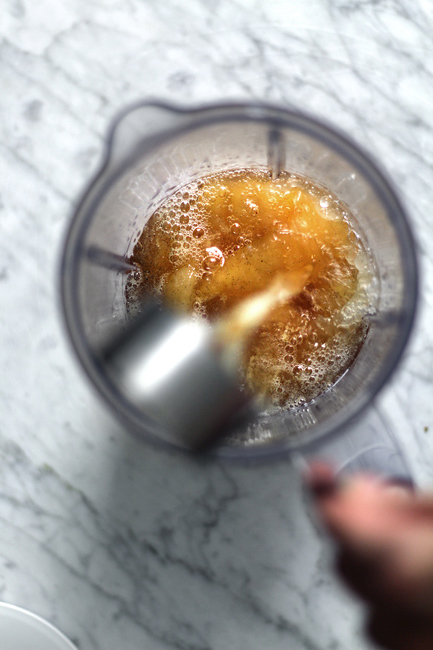 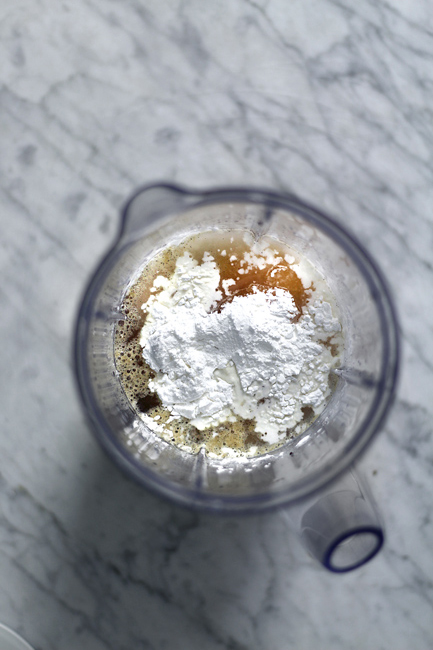 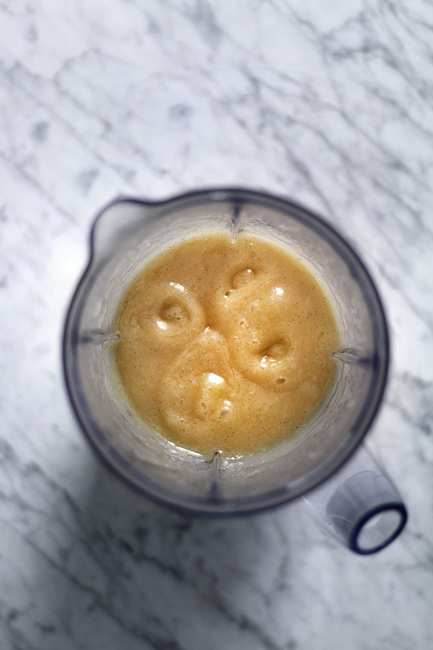 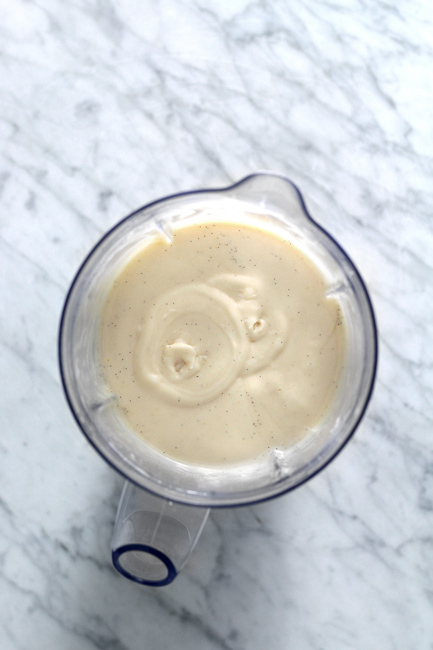 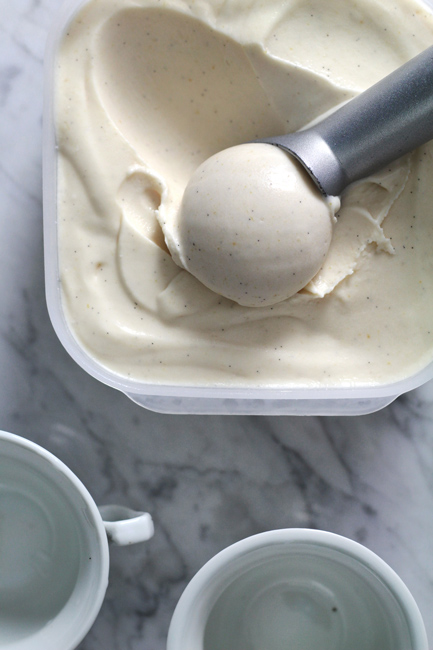 The high-season peaches, smartly, decidedly to side with main plot and joined the mockery.  But tucked in an unnoticeable corner behind the loud flares of summer cherries and melons, was a box of quiet… off-season pears.  Out of place, awkward and unwelcome, they stroke a string inside my empathetic core.  As someone who isn’t normally familiar with pears, I felt a flush of faith and immediately… asked if I could conduct a taste-test.

God damn it! I can be really cynical sometimes! 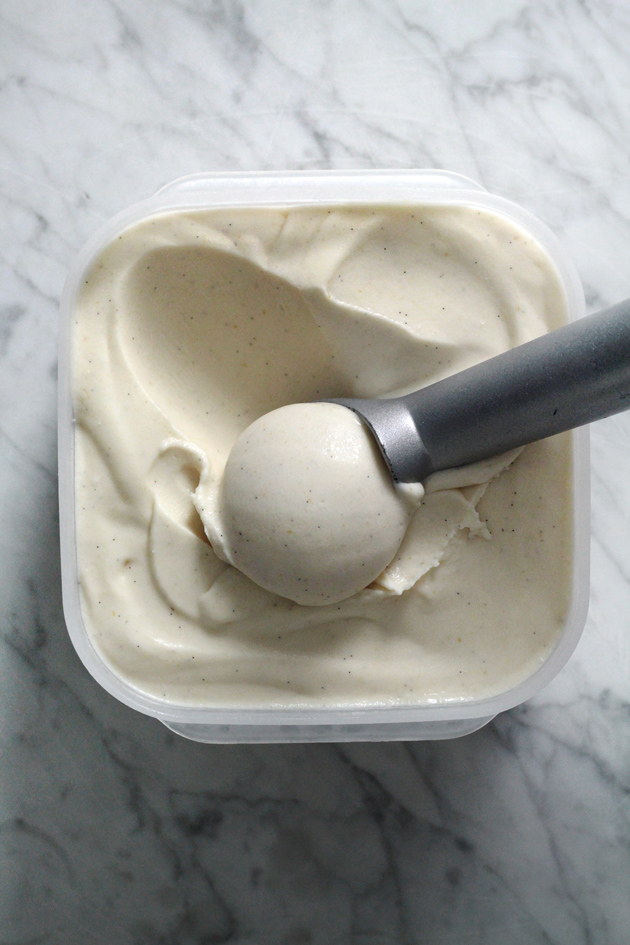 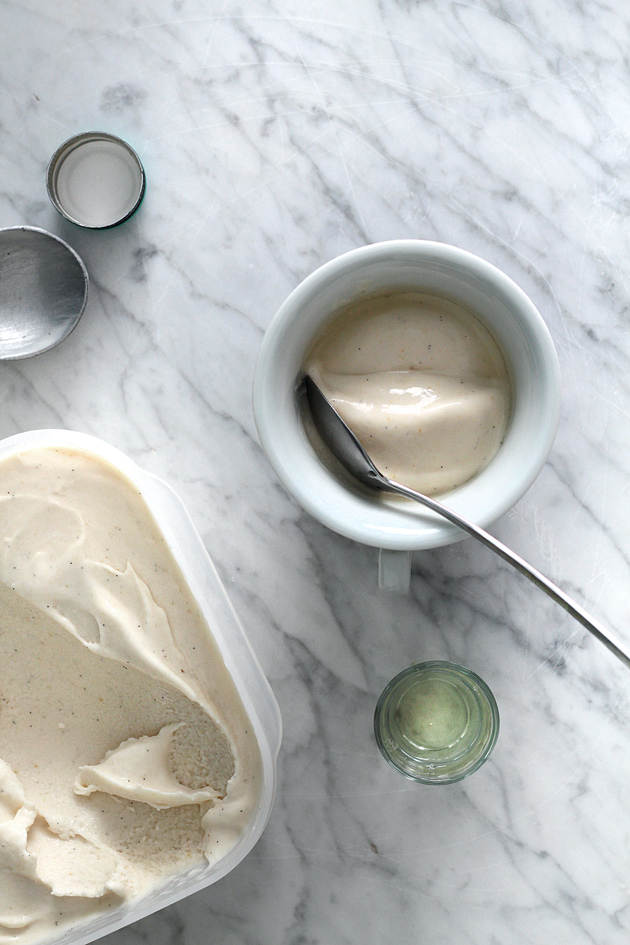 But the pears were generous, sweet, and surprisingly fruity and fragrant.  On the rest of the ride home, I had six new companies tucked between my feet.  Of course right away, I started imagining ways I could play with my new friends… possibly… the only friend left.  How about a glazed pear tart to up the already-boiling temperature of my apartment and switch my emotional meltdown to a physical one?  Maybe not.  How about caramel and poached pear cake to nudge me over the edge into those-curious-sidewalk-people-who-mumbles-to-themselves?  Maybe later.  Well, I guess any oven-related tasks were unadvisable.

So I turned my mind to transforming a warm, spicy autumn classic into high-summer treat.  A sweet, fruity white wine cooked down to a syrupy consistency with pears, vanilla beans, cinnamon, star anise and cloves, then blended with cream to form a thick and supple gelato-base.  The high sugar content, balanced by the tartness of pears, ensured the gelato with a dense, pliable and never-frozen-hard consistency that I love, and the flavours were above all else, elegant but rich.  Hugging a cold, soothing box of poached pear gelato freckled with vanilla bean seeds, came the epiphany.  I see that if it weren’t because of a will-bending disaster trip that has left me wary of all social gatherings, I wouldn’t have discovered one my favourite gelato creation and be able to keep it all to myself.

Hmph, if that’s not how your optimism works, I don’t want to hear it. 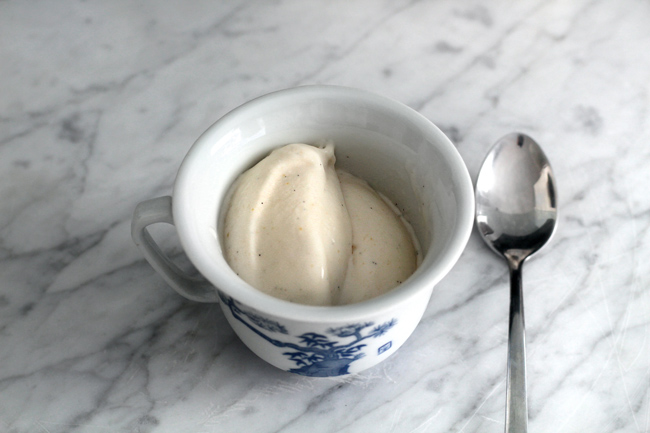 This is a seriously good gelato.  I know that pears are not exactly in season yet, so I think a great substitute would be summer peaches.  The moscato (a sweet fruity white wine) I used was slightly fizzy, which wasn’t actually intended but I don’t think it matters because all the bubbles will be gone in the poaching process anyways.  You don’t need to bleed money for this recipe because the bottle I chose was very reasonably priced at around $10 and the result was still great.

I really struggled whether I should make this a no-churn recipe or not, because theoretically, you can whip the heavy cream to soft peaks then fold in the pureed poached pear-mixture then freeze until hard.  But in the end, I still busted out the ice cream-maker just in case…  If you want to try the no-churn method, chill the purred poached pear-mixture after it’s blended with potato starch, then fold it into softly whipped cream and freeze.  It should do the trick I hope…

Peel, de-core and cut the pears into quarters.  Split the vanilla bean in half and scrape out the seeds.  Add the pears into a sauce pot with 2 cups of moscato wine, granulated sugar, honey, vanilla bean seeds and the split pod, star anise, cloves and cinnamon.  Cook over medium to medium-high heat until the liquid has reduced a little more than half, and becomes thick and syrupy, approx 30 ~ 40 min.  The pears should be very soft and translucent at this point.

Remove the vanilla pod, star anise, cloves and cinnamon, then transfer the mixture to a blender and add 1/4 cup more moscato wine and potato starch.  Blend until the mixture is completely smooth and thickened (the residual heat should cook the starch which thickens the mixture).  Then add the heavy cream and blend just until combined.  Chill the mixture in the fridge for at least 4 hours until completely cold.  Then churn it according to your ice-cream maker’s instruction, then freeze until hard.  (DO NOT over-churn it.  Stop when the gelato is slightly on the soft side then transfer to freezer.  The denser/less airy texture is what separates gelato from ice cream.)

Serve with extra shot of moscato wine if you’d like.