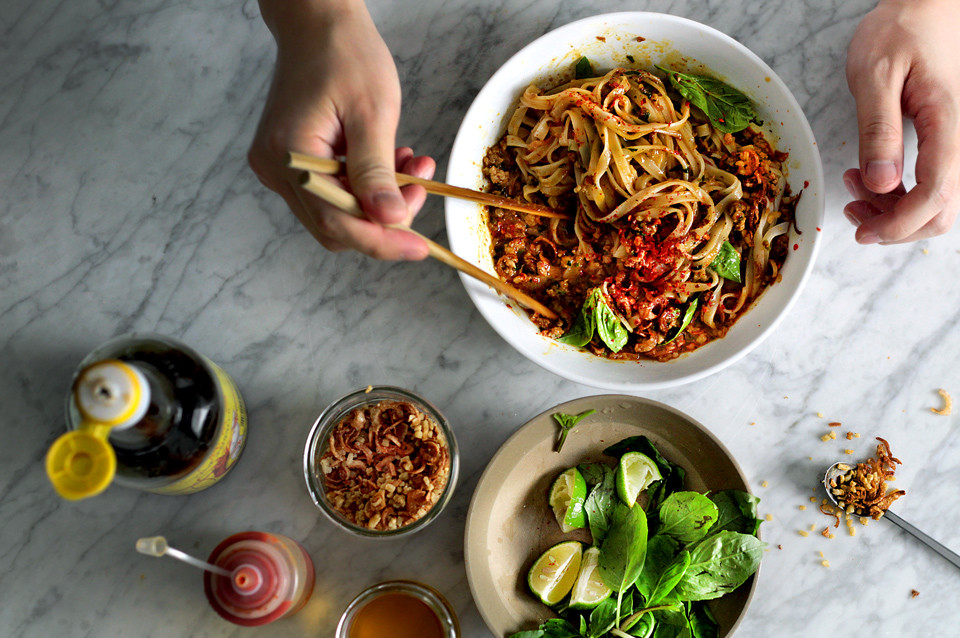 PERHAPS this doesn’t come as a shocker to anyone who’s been stopping by for awhile, but I would like to, for once at least as public record, to officially confess.

Before we shake hands, break breads and plan our next travelling itinerary together, it’s best that you know this about me…  That to a point of being almost overbearing, I have an unhealthy, perverted… RAPACIOUS fixation on anything and everything that falls under the category of – street foods.

I’m talking about an uncurbed obsession that overwrites all hygienic senses.  It could lead to an unpleasant behaviours that I’m dangerously comfortable with, that I would look right at your fearful eyes with unaccompanied excitement, drag you if I must, to sit down on a randomly scouted location where flies are feasting on bodies of other flies, and jitter over a bowl of something that I just ordered purely through hand-signals, as looooong as it looks tasty.  Then as if completely clueless, I’d turn and ask you with concealed hostility… Is there something wrong with your food?

At this point, you should know that you’re stuck with a madwoman who has no intention to eat anything under a proper roof.  Ask Jason, and his collaterally-damaged digestive system has got some tearful stories to tell.  I’m not proud… I’m not proud… 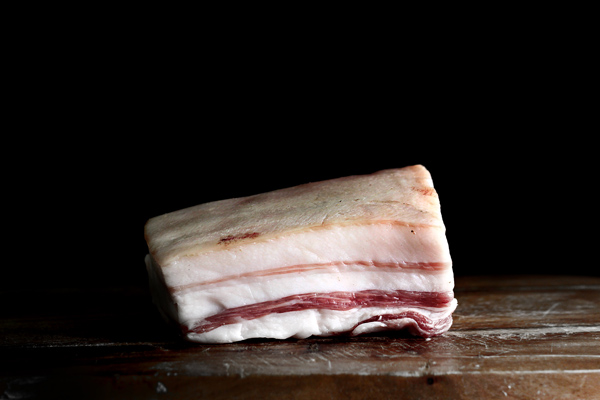 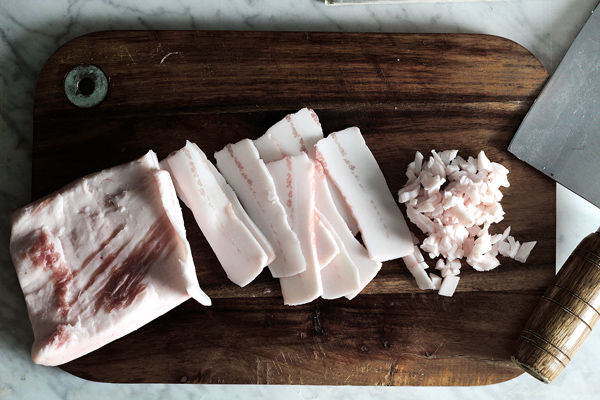 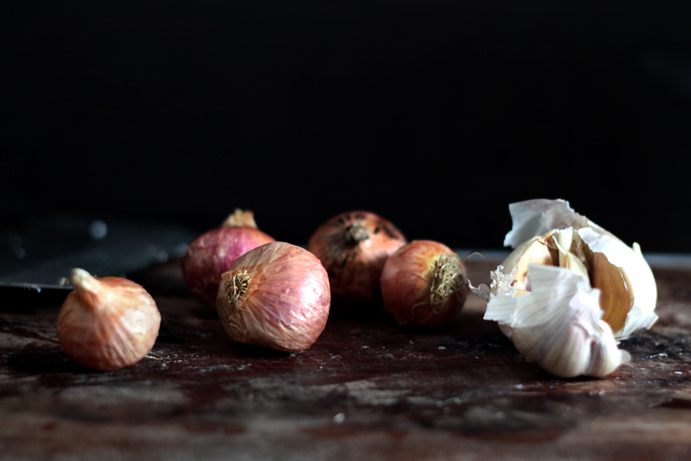 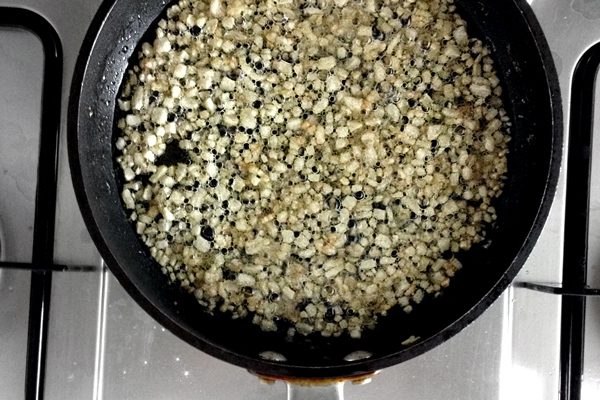 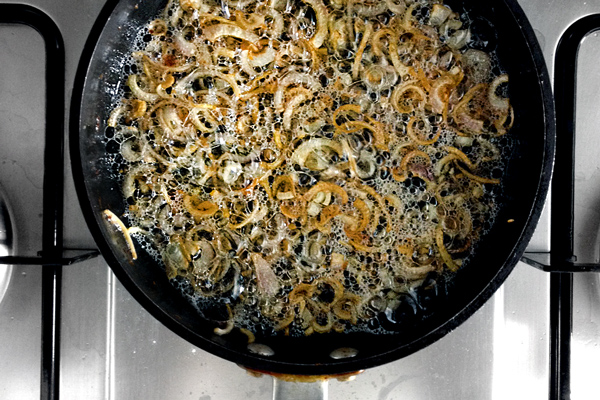 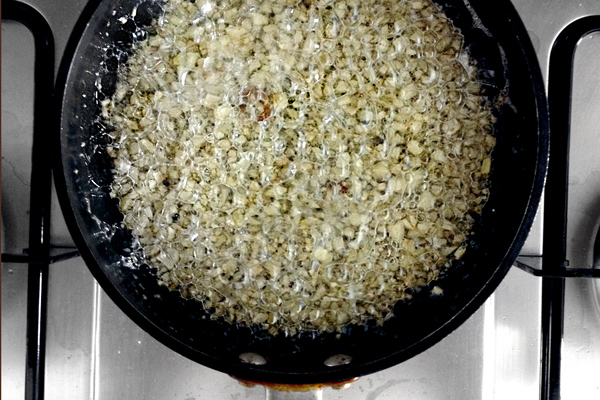 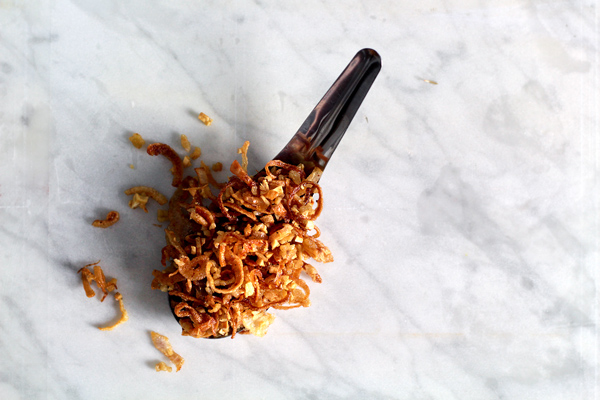 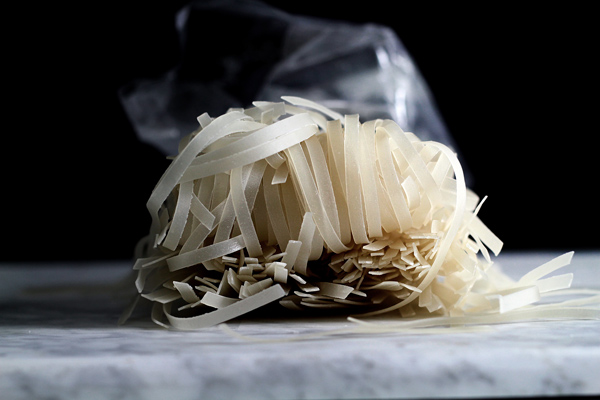 Due to this very sickness, in the entire 15 years of my existence in North America mostly under the watchful eyes of some-kinda-FDA, I’ve only managed to land my feet on New Orleans and a numbers of non-food-motivated resorts in the Caribbean.  Compared to say, in the scant 6 years of moving back to Asia, I’ve already skimmed through the surface of every major countries in the Southeast – Vietnam… Thailand… Malaysia… Indonesia… undisputedly, the street-food court on planet Earth.  In fact, I don’t recall sitting down in an actual, proper “restaurants” throughout the entire time.  I don’t think my ass had graced anything but plastic.  And I guess as a legitimate concern, the great India is still left unturned because Jason isn’t ready to find out what it would do to his more sensitive soft parts.  Deep down… he knows he can’t hold this beast back much longer…

But other than India, there’s another overlooked jewel, another street food-junkie haven that I haven’t paid justice to.  Just over the promised horizon in Northern Thailand, there is this place called, Chiangmai.

I haven’t been to Chiangmai.

I don’t know why the fuck I haven’t been to Chiangmai, as it is allegedly the place to be for street-foods in Thailand, and somehow I left it out of my poorly planned trip.  And I guess on some level, I must have some balls to call what I’m cooking today, by the name of a beloved staple from a place that I’ve never been to.

The Chiangmai noodle, aka, khao-soi.

First, let me just shout on top of my lung that this, is not, by all means, authentic khao-soi.  In fact, I’m not even exactly calling it khao-soi.  Instead, as a disclaimer, this is mah-khao-soi, as in, my khao-soi.  It’s a speed-up, scratch-the-itch kind of version if you will.  And this carefully adjusted tone, I hope, is on some level accepted because after some inconclusive research based on English-speaking websites, I have come to a bold assumption that it’s just one of those things that adapts.  From what it seems, every khao-soi makers in that region probably all has their own unique, perhaps widely variable recipes, ranging from the use of rice noodle to egg noodles, with soups that ranges from all color spectrums in between light yellow to deep red.  I’ve even seen a no-where-near-soupy, but more “saucy” version from a restaurant specialized in Northern Thai-cuisine.

So hey, based on what I’ve heard and eaten, with one eye closed no less, I dare say that it’s something with a bit of room to play with, which brings us to today’s subject – crack slurp part II. 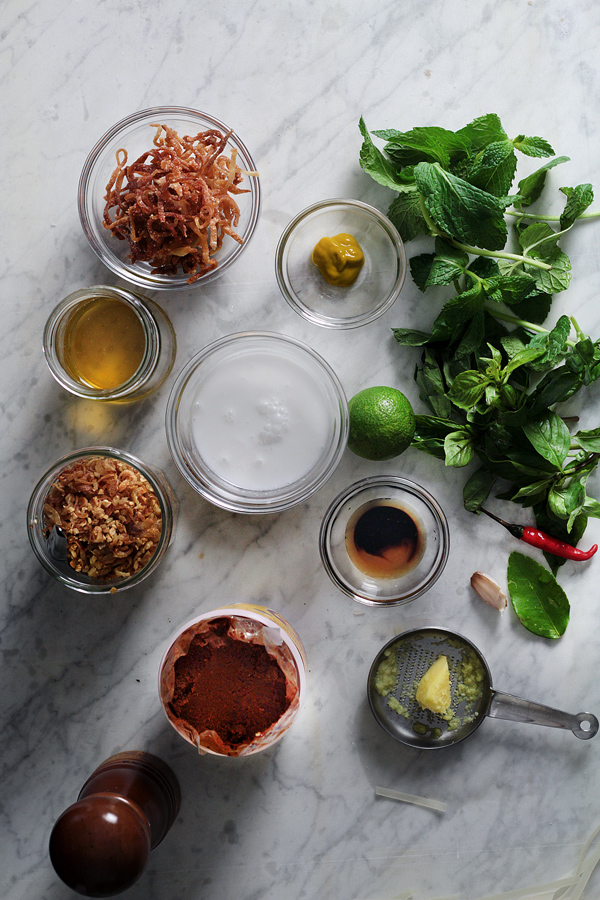 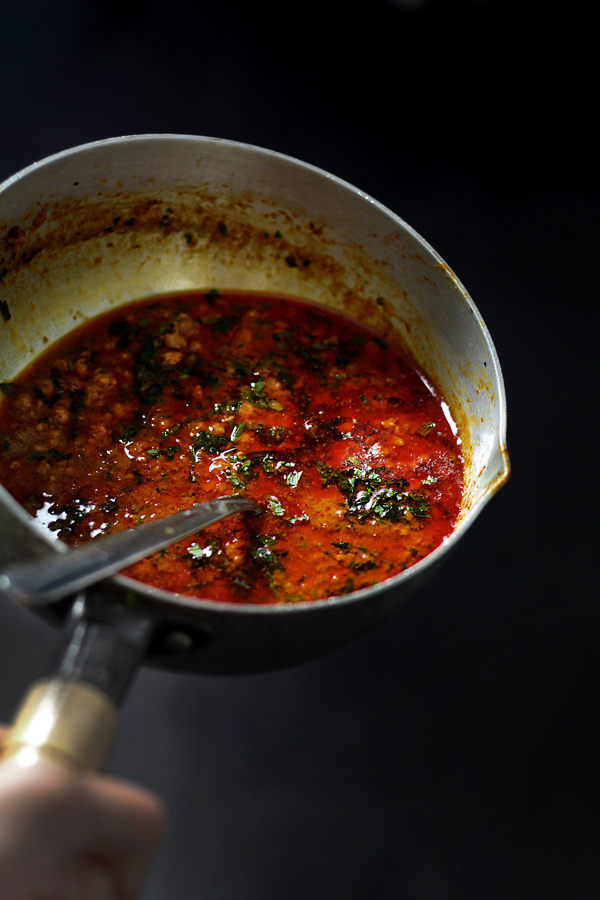 Khao-soi is made to be turned into crack slurp.  For one, it’s drenched in a thick, saucy soup based on a yellow curry-like paste and coconut milk.  For two, it’s very slurping as it uses fresh Asian egg noodles or rice noodles, then topped with even more crispy fried noodles!  Then last but not least, based on my experience, almost all types of Southeast Asian curries, like two peas in a pod, pair beautifully with crack (if you have just landed, it’s rendered chicken or pork fat plus the cracklings, mixed with fried shallots and in this case, garlic as well).  My instinct isn’t wrong.  Mah-khao-soi is a symphony of too-much-good-things.  Spicy, savory, aromatic and intense, with just a bit sourness from the lime to cut through the richness of coconut curry and fried shallots.

This is, yet, one of my favourite things that I’ve cooked.

I know I have loudly endorsed the act of making your own curry paste at home before, and I still believe it but today I’m going t say, don’t bother.  This dish should be theoretically fast and convenient, a satisfying weekday dinner or a late-night indulgence that you can put together in 10 minutes.  That is first, if you just take the 20 minutes of work that’s as difficult as frying bacon, the crack will keep forever in the fridge just like almost any other ingredients in the recipe (yes, even chopped mints and cilantro can be frozen).  In a fraction of time, as far as your taste-bud’s concerned at least, you can be sitting on a plastic stool somewhere on a street-corner in Thailand.  It makes this senseless hawker-beast very happy. 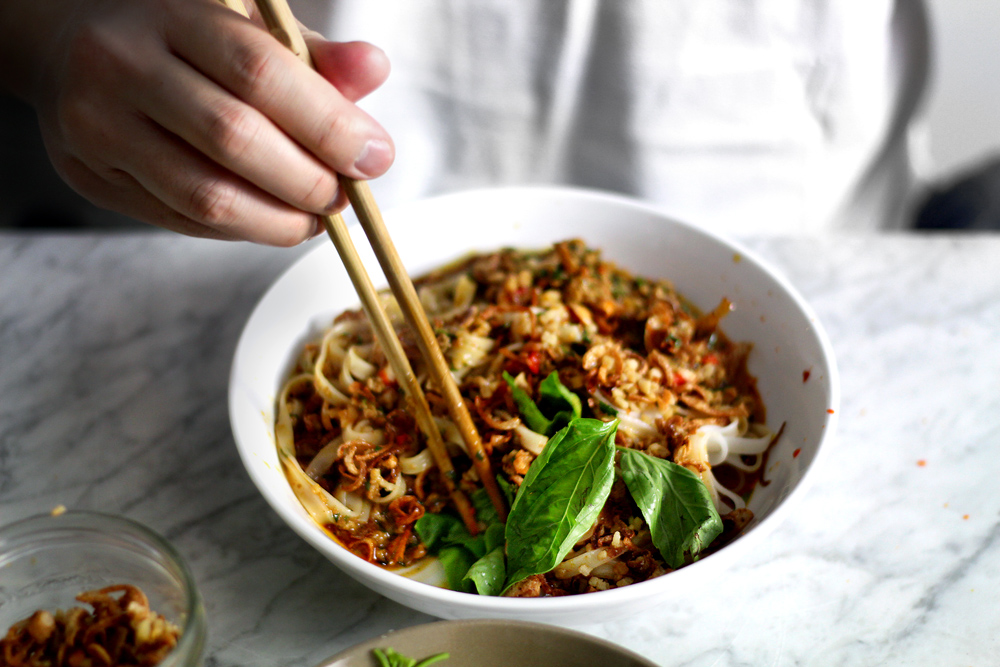 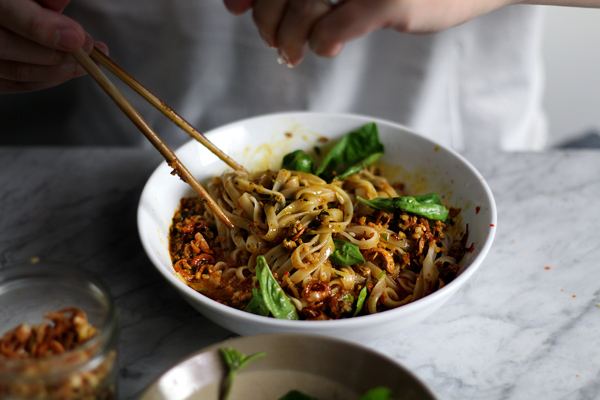 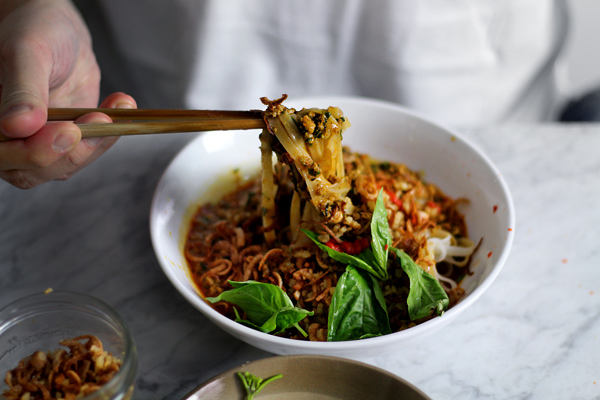 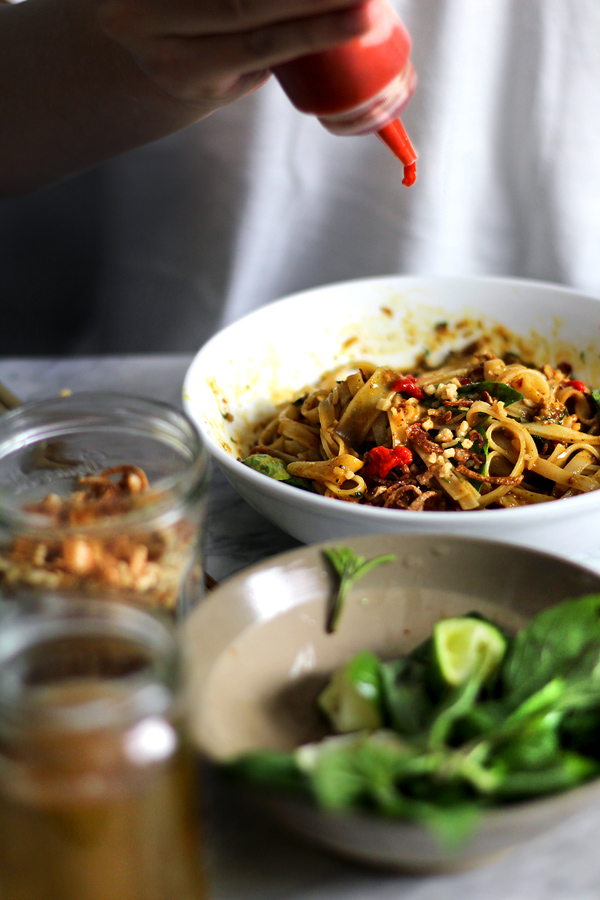 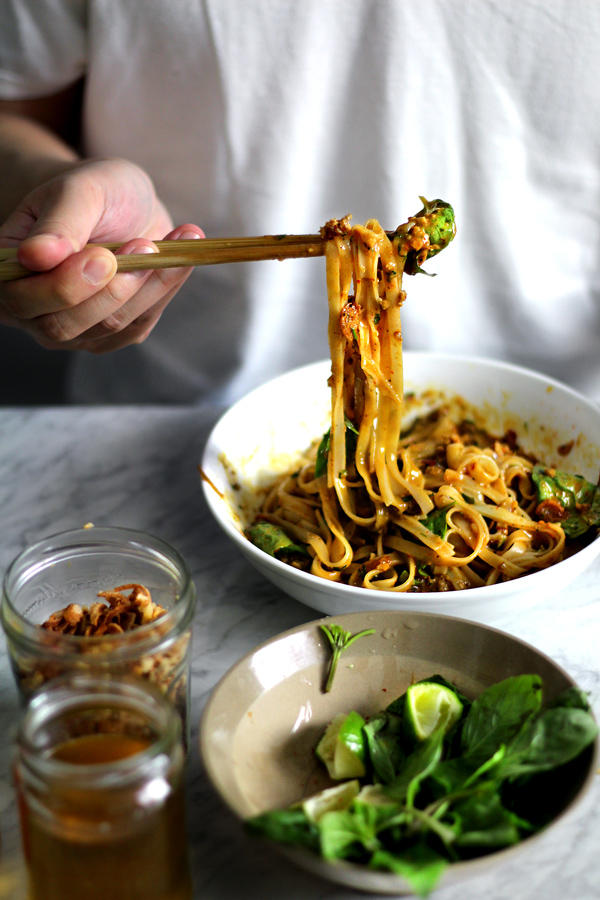 As previously mentioned, you can choose different fats for rendering the oil and crackling.  Chicken skins or in this case, pork fat-slab (easily separable from pork-belly), whatever is available or more convenient for you.  There are many different commercial brands for Thai-style curry paste out there, and I have included a link to the exact one I used (a very thick, dense paste without oil).  Yellow curry paste is heavy on turmeric, and comparatively to red (heavier on dried red chilis) or green (heavier on cilantro and green chilis) curry paste, it’s milder and less spicy.  I’ve also tried mixing yellow and red for an even more complexed flavour.

The go-to noodle for khao soi is supposed to be fresh Asian egg noodles, which I can easily find here.  But I’m guessing that’s not the case for most of you so for convenience sake, I substituted it with dried rice vermicelli that’s similar to the ones used for pad thai, or pho bo.  Just make sure you choose one with a certain width because the “angel hair-type” rice noodles will absorb the sauce way too quickly.  I’ve also switched fried egg noodles (a staple topping for khao soi) with fried dumpling wrappers.

If you are absolutely not keen on rendering pork fat, you can use 1/2 cup of vegetable oil as substitute… just breaks my heart…

The crack (makes for 2 ~ 3 servings with extra pork fat left):

To make the crack:  Freeze the pork fat-slab until hardened, at least 2 hours.  Slice it thinly then cut into small dices.  Cook the diced pork fat in a non-stick skillet or pot over medium heat, until it has rendered out all its fat and becomes crispy and golden browned (it will take a couple more min to brown after all the fat’s been rendered).  Drain it through a fine sieve, and season the pork crackling with salt and ground white pepper.

Return the pork fat to the skillet/pot (you should have around 1/2 cup) over medium-low heat, and add the finely sliced shallots.  Stir frequently and slow-fry the shallots until they are dehydrated, and turn medium-golden browned, approx 8~10 min.  They might still feel “soft” and not quite “crispy” at this point, but that’s ok.  Drain them through a fine sieve, and they will darken in color slightly and crisp up as they cool.  Season the fried shallots with salt and ground white pepper, and return the pork fat to the skillet/pot again over medium-low heat.  Now add the finely minced garlic and repeat the same process.  Drain the garlic immediately as they turn lightly-golden browned, 3 ~ 5 min.  Anything darker than that will taste bitter.  Season with salt and white pepper, and mix the seasoned pork crackling, fried shallots and garlic together.  Reserve the pork fat.  That’s the crack.  You can store the pork crackling + fried shallots + fried garlic in an air-tight container in the freezer, and the pork fat in the fridge.

To fry the dumpling wrapper:  Cut 2 ~ 3 Asian round dumpling wrapper (not wonton wrapper) into thin slices.  Fry in the pork fat over medium-high heat until golden browned and crispy.  Drain well, season with a little salt and pepper, and set aside.

To make the mah-khao-soi:  Bring a large pot of water to boil for the vermicelli.  Meanwhile:

Heat 2 tbsp of crack-oil (reserved pork fat) in a pot over medium-high heat.  Brown the ground chicken (or beef, or pork) evenly, then add the Thai yellow curry paste and cook until fragrant.  Add all the seasonings and turn the heat down to medium-low, and cook until the mixture has reduced a little and thickened slightly, approx 5 min.  Add the chopped cilantro and mint and stir to combine.

Cook the vermicelli according to package-instructions.  Drain well and transfer to a bowl/plate.  Pour the curry-mixture over the noodle, then top with 3 tbsp of crack (pork crackling + fried shallots/garlic) and torn Thai basil leaves.  Squeeze lime and orange chili sambal, stir stir and slurp slurp. 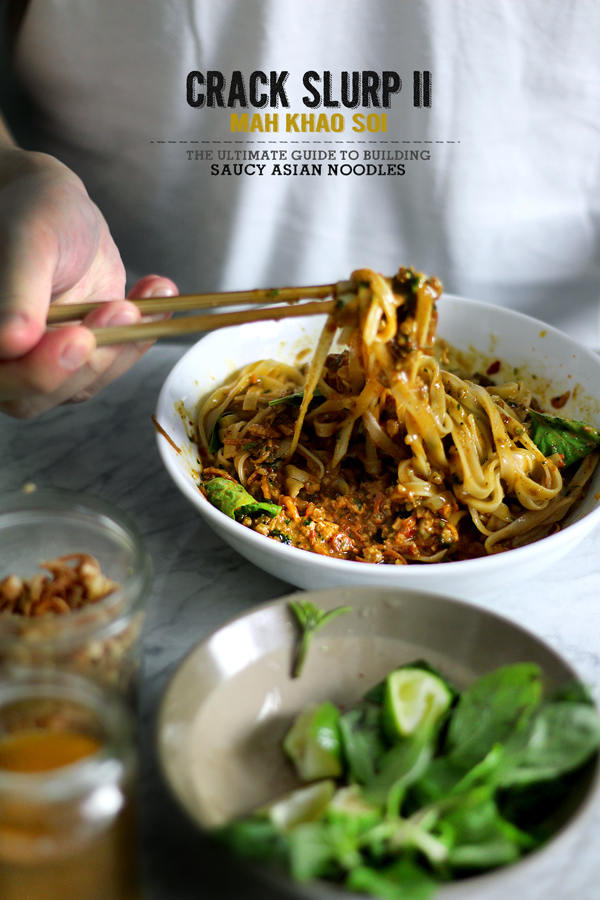 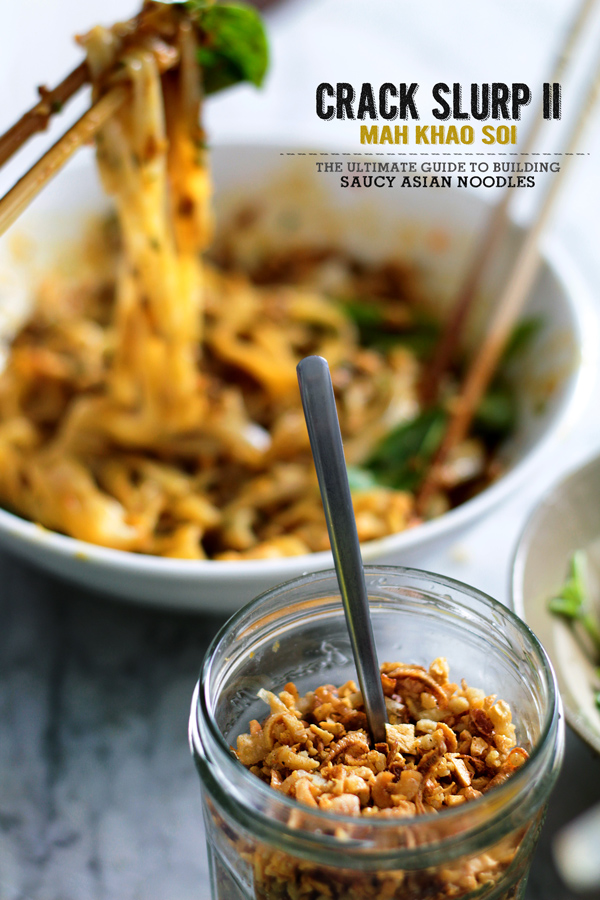