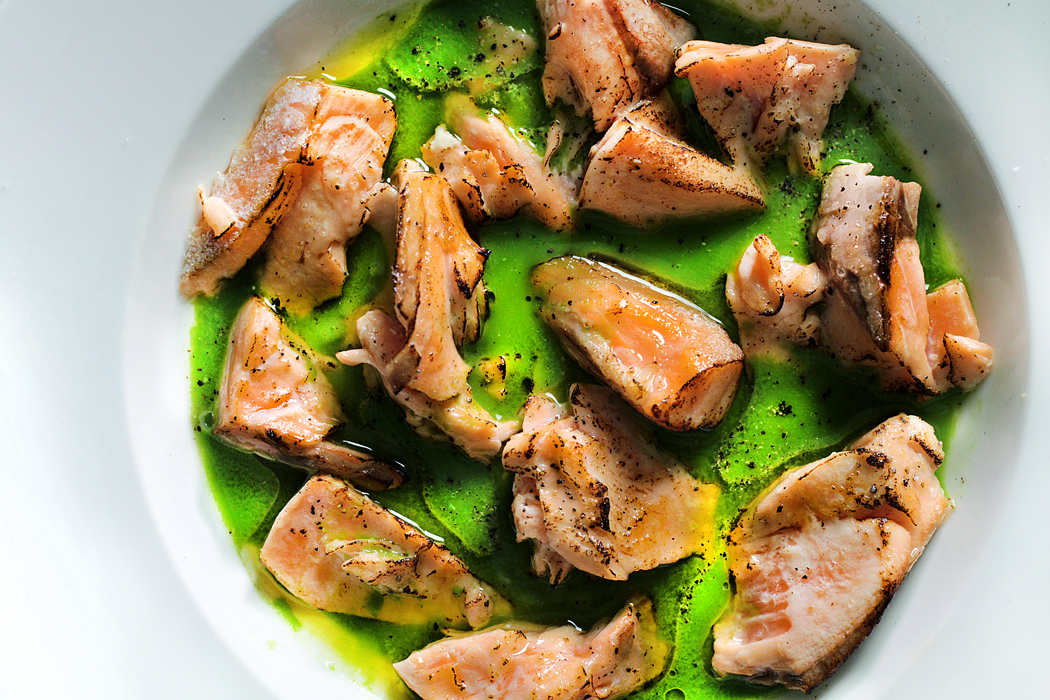 “REVELATIONAL… INGENIOUS… DO YOU JUICE?”

Last week I discovered something revelational… ingenious… a recipe that isn’t just a recipe, but an idea. A method with infinite possibilities. The final product tasted so extravagantly delicious, the word “healthy” didn’t even come within a mile in association, and I was simply going to pitch it to you as the best and easiest damn salmon dish you’ll ever encounter. Little did I know that I almost regrettably left out the single greatest marketing value it may possess, until last night, I ran into this question: 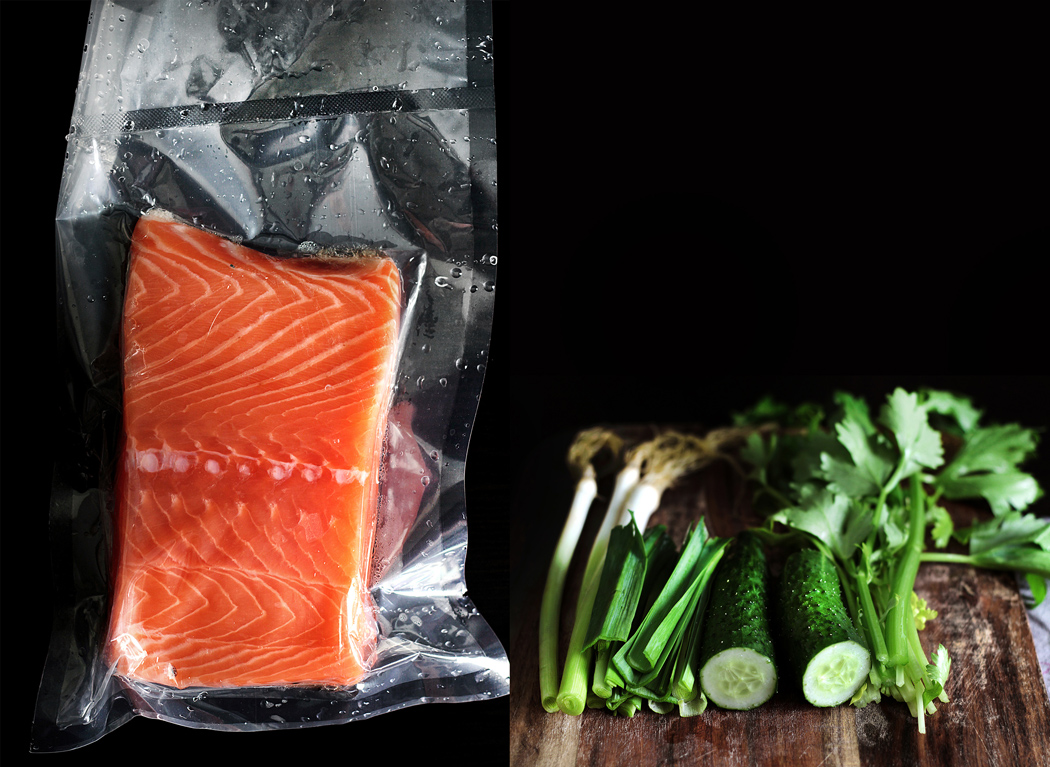 Have you heard? Juice is very happening. Last night, just before I almost published without knowing, I had the pleasure of meeting a new friend visiting from New York, who’s a member of an uprising grassroots (literally) movement sweeping NYC. They are the people who pay $10~$12 on a daily basis for a religious cup of organic vegetable fluids (aka juice) that tastes like… the sublimity of kale on kale. Yum~. Of course, while juicing is a great way to absorb all the healthy vitamins you need, not everyone is a fan of the taste. In that case, it may be worth researching Private Label Supplement Products since you can create a pill which will have the nutrients you need without the taste. I still highly recommend giving juicing a go since it is so beneficial. It’s the KOK party and they aren’t kidding around. They will dominate the world by outliving you by 30 years by drinking KOK juice…

What now? Juice is trending? If it was last month, I’d roll my eyes cuz what am I? Do I look like Gwyneth Paltrow’s colon to you? But now? Yes, yes I actually juice! In fact I’ve been juicing relentlessly for the past couple weeks, only in a slightly different, more edible context. It involves a concoction of green veggies and herbs with jalapeño pickling vinegar and a dab of whisked sour cream, being poured over a bed of flame-torched, soft-baked salmon. And it tastes like foods, great foods that doesn’t make you feel like you’re only eating it to shrink a tumor. Just when I thought this post is about salmon, it’s actually about it-juice. Shit, I can never keep up…

But, fads will be fads. The juice sauce was unexpectedly great, but it’ll never be completed without this equally fabulous salmon. 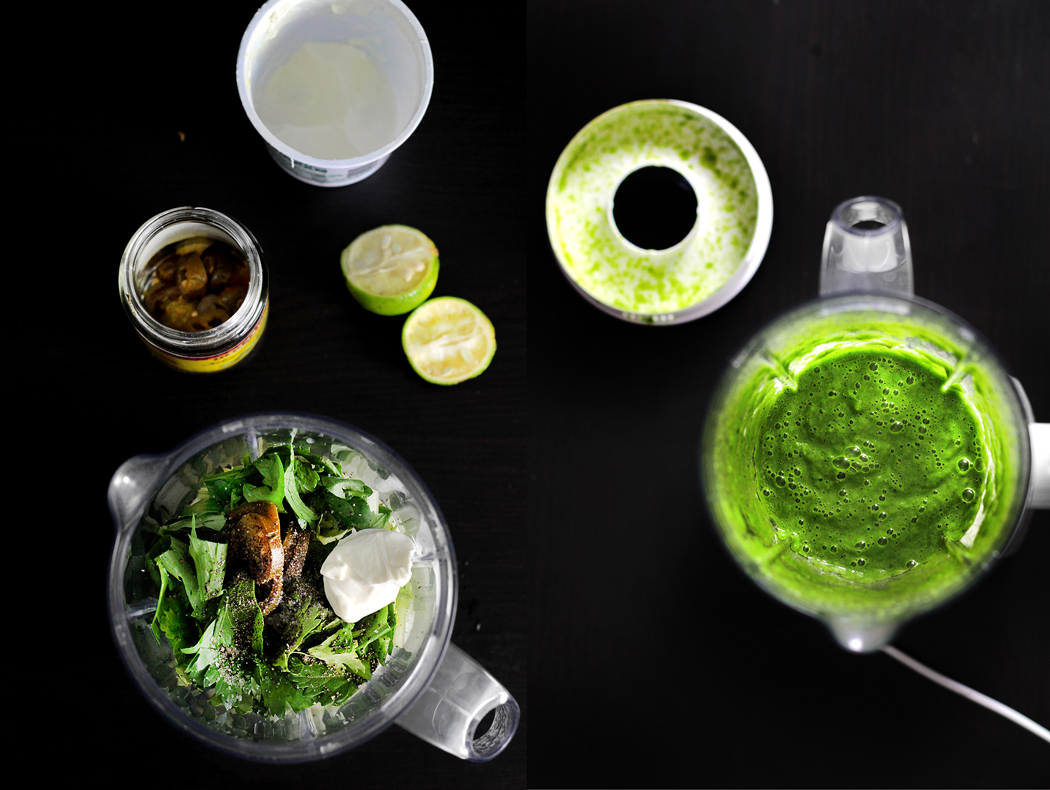 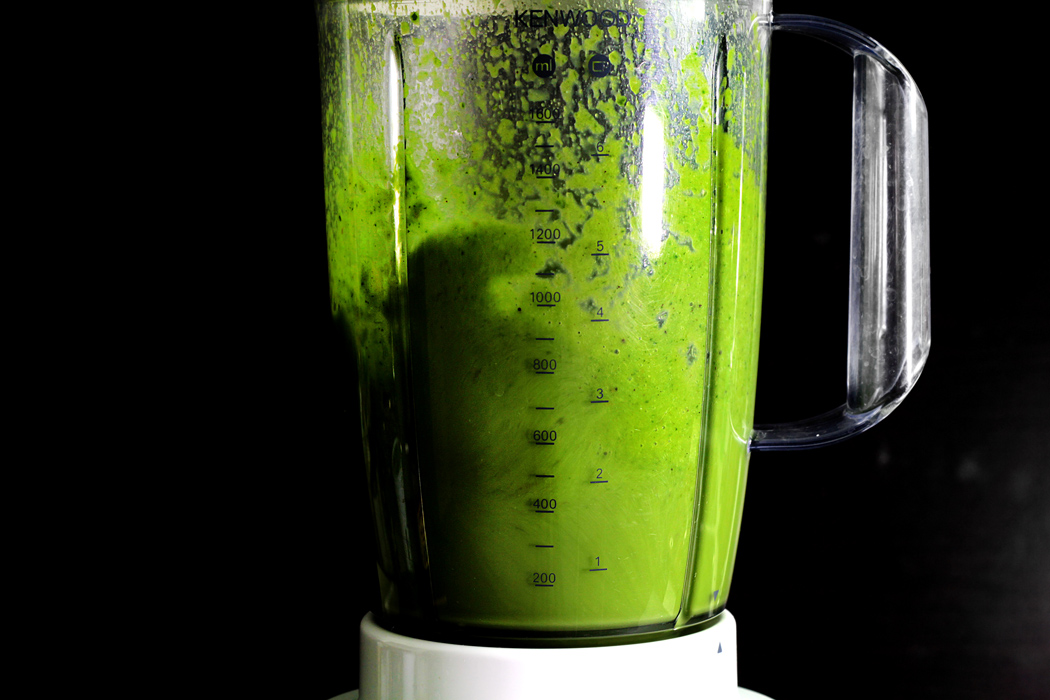 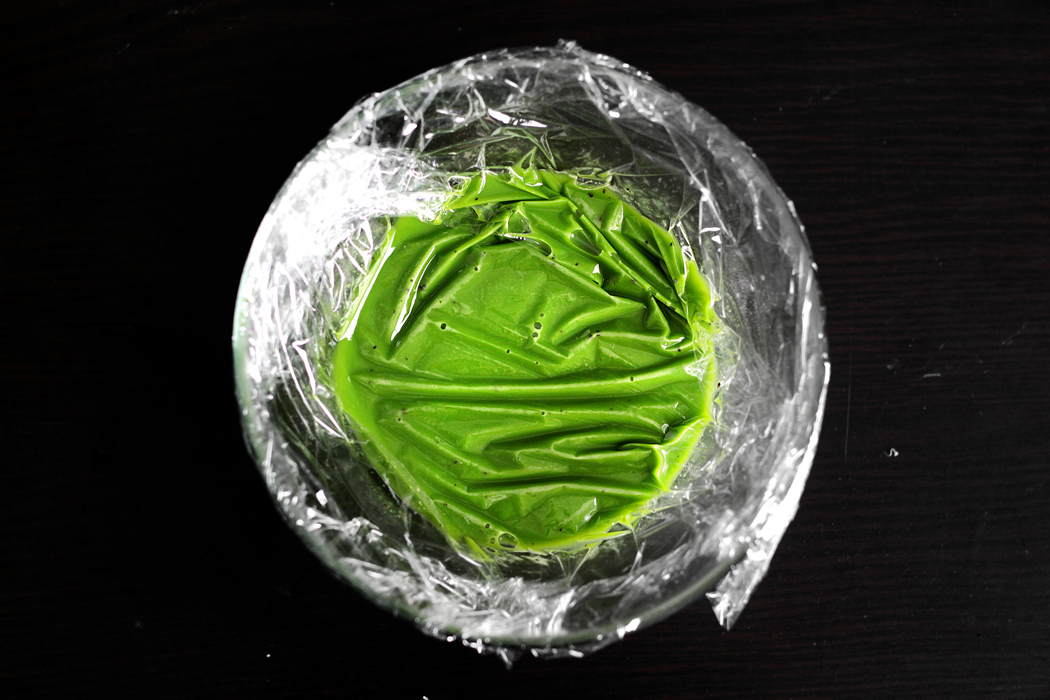 This idea from Bon Appetit of using vegetable and herb juice as a “sauce” came at a perfect timing when, for the first time in my life, I’ve been enjoying eating salmon. Actually, cooked salmon. I mean obviously me and raw salmon have been quite cozy over dishes like Hawaiian salmon poke, or mini salmon hand-rolls, so I hope it’d understand when I say it loses its suppleness and looks 10-years older when it decides to take a bake and turn itself into pink chalk.

Salmon, my dear, perhaps a fake tan would be sufficient next time? 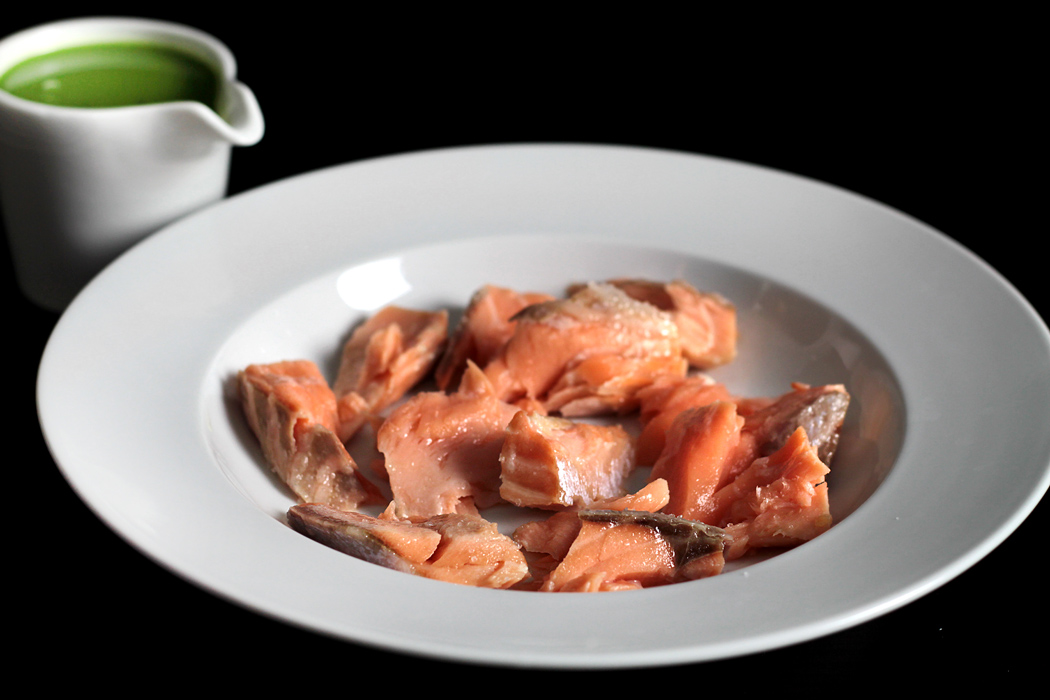 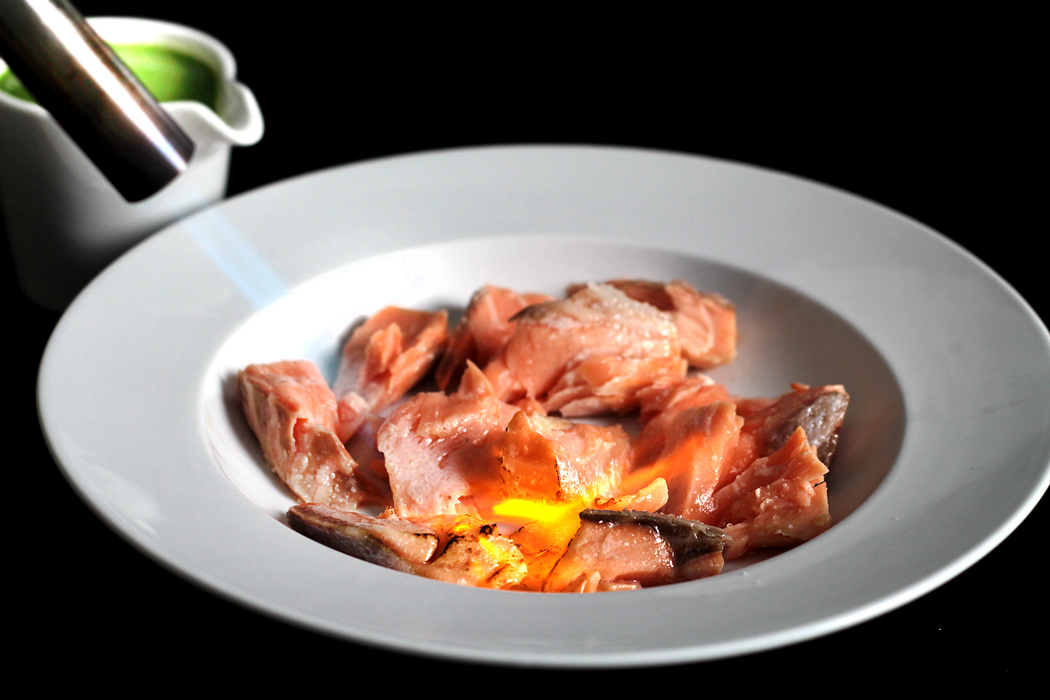 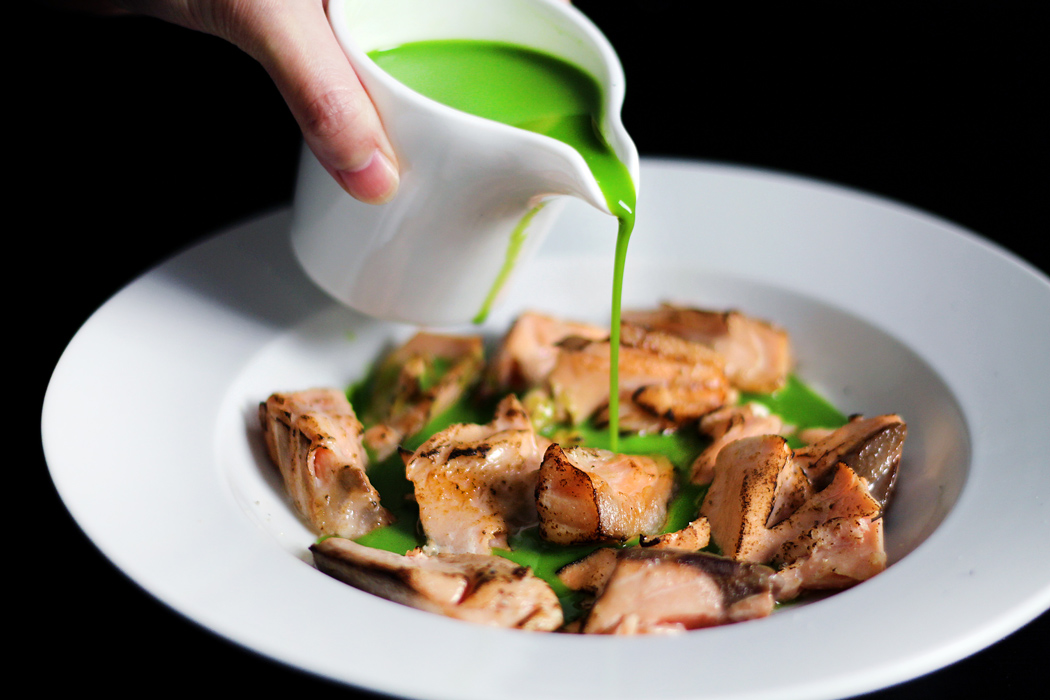 But of course, I was wrong. Again. A mid-section fillet of salmon, baked in a relatively low temperature for a reasonable 20 min, will a yield gently cooked outer layer and a still pink, borderline-undercooked interior that is… well, perfect. But the part where it gets better, yes, as I discovered while looking for a way to warm up cold salmon without further cooking it, is that if you just leave it alone to cool down, or even in the fridge to chill through completely. Then right before serving, you break apart the tenderness with your hands and softly softly kiss it on the forehead… with a flaming torch! Blistering the surface fat and warming through the flesh just slightly is the answer to smoky and intensified baby-pink salmon, which I’ve been addicted to with just a sprinkle of sea salt and freshly ground black pepper. Until I started to juice of course.

The union of two tasty ideas doesn’t always equal happy marriage, but in this case, it does. No more to be said. Torch your salmon, and juice this way. 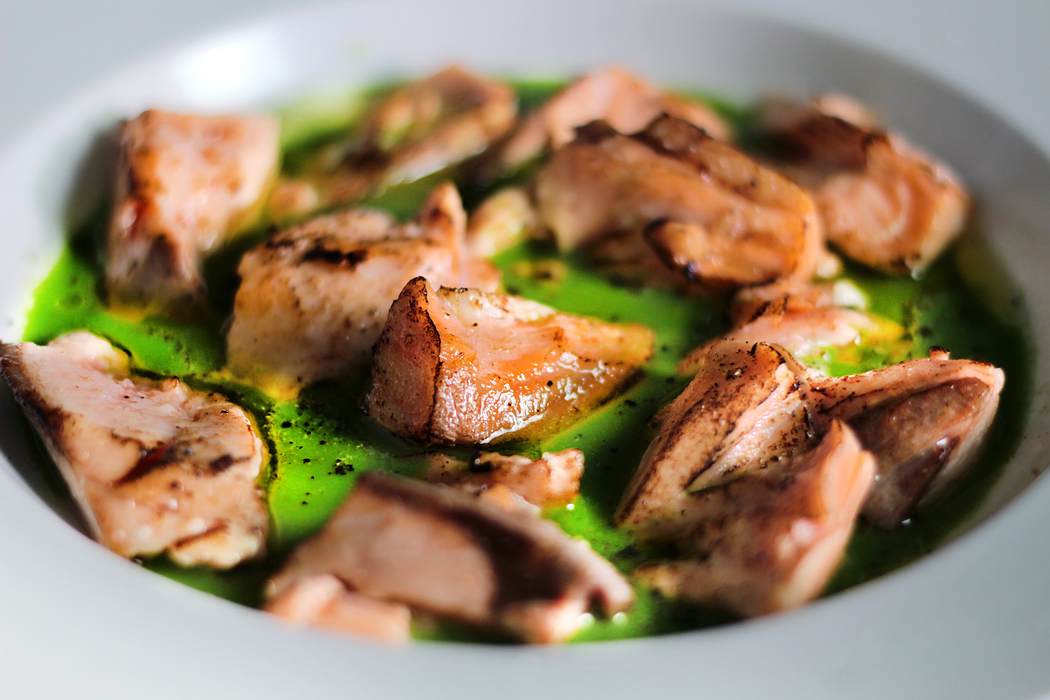 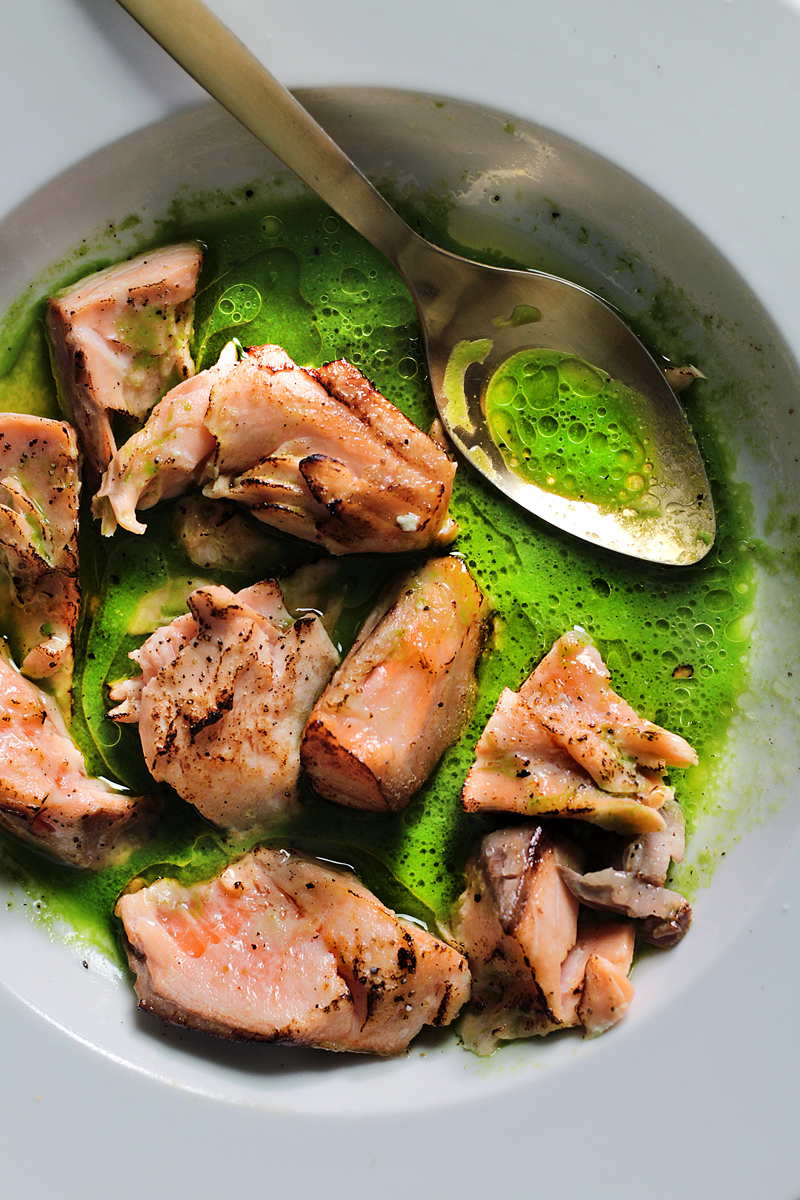 This recipe is a great entertaining dish because the actual cooking of the fish can be done even the day before. That’s right! Because the salmon can be lightly warmed up by the torch with parts of it still pink and slightly cold. Think torched salmon sushi! To cook salmon perfectly: the cooking-time is based on a typical mid-section salmon fillet that’s 1 1/2″ (4 cm) at its thickest part. The temperature of the salmon, right before it goes into the oven, should be cold (refrigerated temperature) but not borderline frozen (for example, the exterior is defrosted but the center is icy-cold). I typically treasure the skin of salmon as crispy chips from the sea, but in this particular case, it isn’t applicable. I like to keep the skin on during baking because it keeps the salmon moist, but this cooking method won’t turn it crispy so I remove it after baking.

You can make the sauce with a juicer, or a blender like I did. The procedure varies slightly. The recipe from the magazine uses white wine vinegar, which I’ve switched with the pickling juice of jalapeño. I think it did wonders for the sauce because it added not just acidity, but a bit of heat and flavours. I also added a little sour cream to make the juice “rounder” and “smoother” in texture and taste. The sauce actually tastes better after sitting in the fridge for 1 hour so make it before you start cooking the salmon (if you aren’t doing the salmon the day ahead).

To make the green juice sauce with juicer: Juice each vegetable separately. Then combine the juice of cucumber, celery, spring garlic or leeks, cilantro, pickled jalapeño and ginger. Whisk in the pickling juice, lime juice, sour cream, salt and freshly ground black pepper, then cover the surface with plastic wrap and let sit in the fridge for at least 1 hour (to chill and also for the flavours to combine).

To make the green juice sauce with blender: Cut all the vegetables and herbs into very very small pieces (the smaller they are the easier they’ll blend). Blend all the ingredients together in a blender until very smoothly pureed, then pour into a very fine sieve, or very fine cheese clothes sitting over a large bowl. Press on the pulp with a spoon/or tighten the cheese clothes with your hand to squeeze as much juice out as you possibly can. You should have about 1 cup. Cover the surface with plastic wrap and let sit in the fridge for at least 1 hour (to chill and also for the flavours to combine).

Make sure the salmon fillet is cold but not icy-cold. Pat dry with a clean towel then rub a layer of extra virgin olive oil all over. Place on an oiled baking-rack over a baking-sheet, skin-side up, and bake in the oven for 20 min (for a mid-section salmon fillet that’s 1 1/2″ (4 cm) at its thickest part). Remove from the oven and let it cool and rest for at least 20 min (do not cover with foil which will further cook the salmon), or keep in an air-tight container in the fridge until needed.

To assemble the dish: Peel the skin off the salmon and break the meat into large chunks, then scatter over a large serving dish. The center of the salmon should be still pink and just borderline-cooked. Season generously with sea salt and freshly ground black pepper, then light up the torch and start charring the surface of the salmon. DO NOT over-torch! You’ll over-cook the salmon as a result. Just some blistering and smokiness on the surface-fat is the goal. Pour the green juice sauce onto the bottom of the plate/dish, and drizzle with a little extra virgin olive oil. Serve immediately. 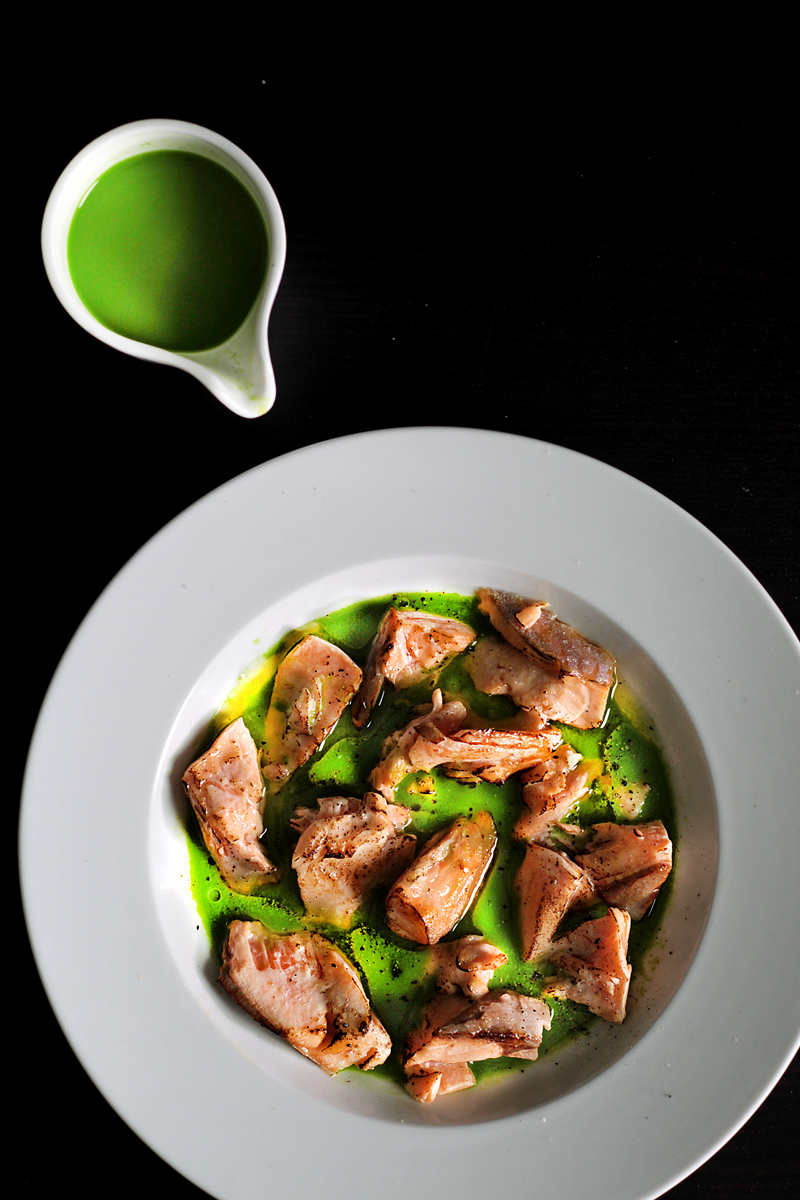