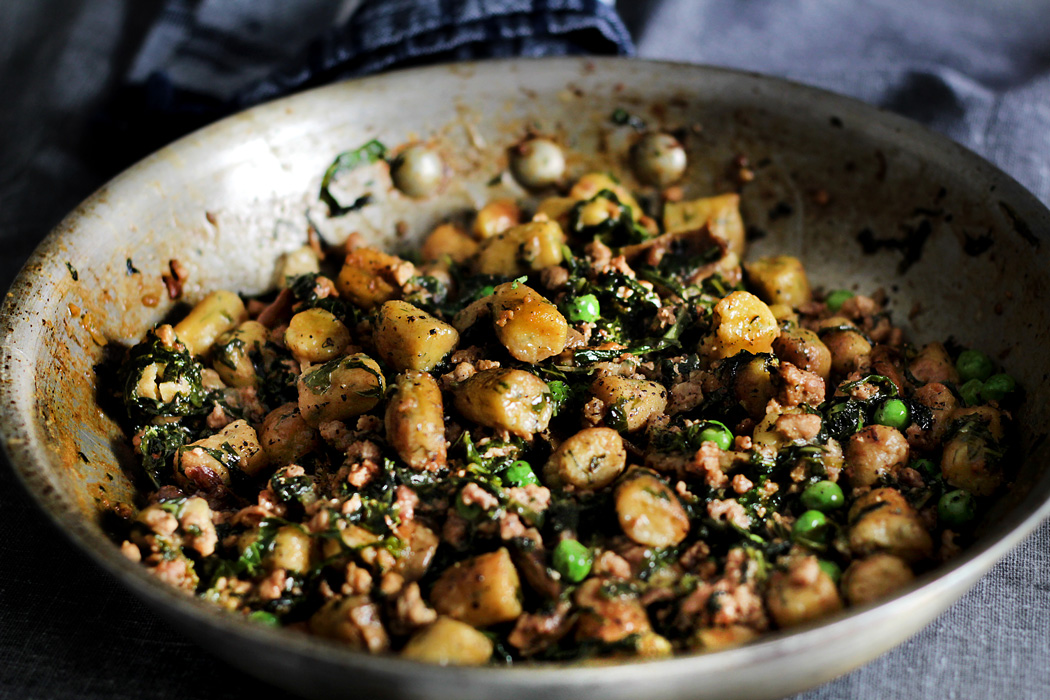 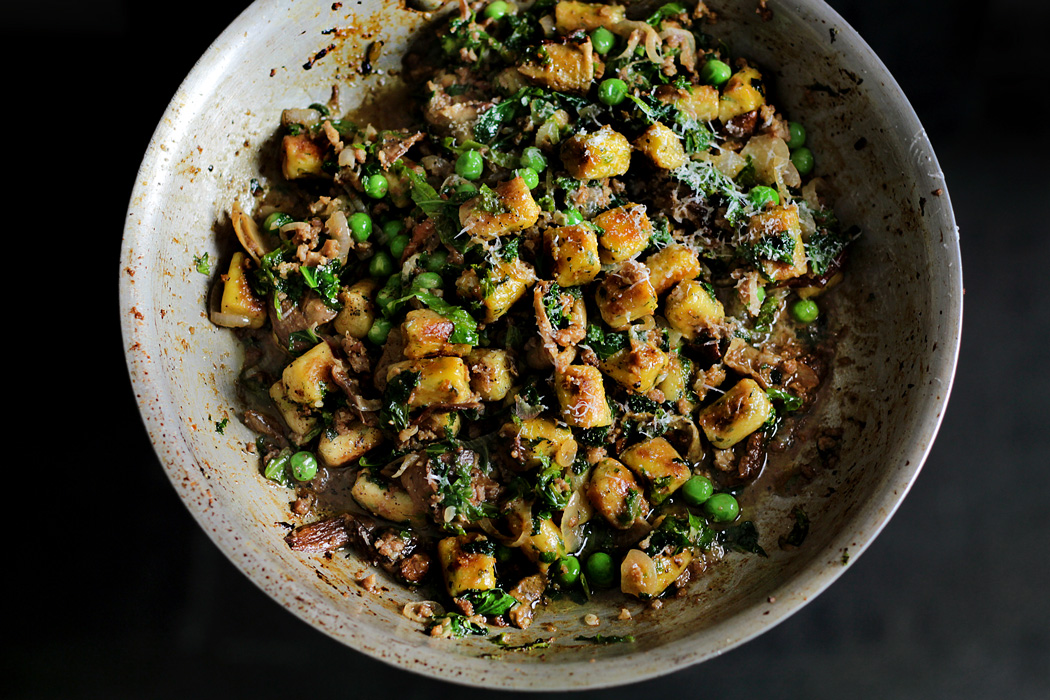 I don’t know which shocker this post is more about.  The best damn gnocchi you’ll ever have in your life, that instead of “fluffy clouds”, tastes more like spring thunder in your mouth, or the fact that… holy shit, I cooked vegetables!  I guess… both, I think.  Two previously unfavoured dinner-candidates came together and pulled a stormy revolution in my kitchen.  I’ve survived with only a belt-overhanging gutt to tell you about it. 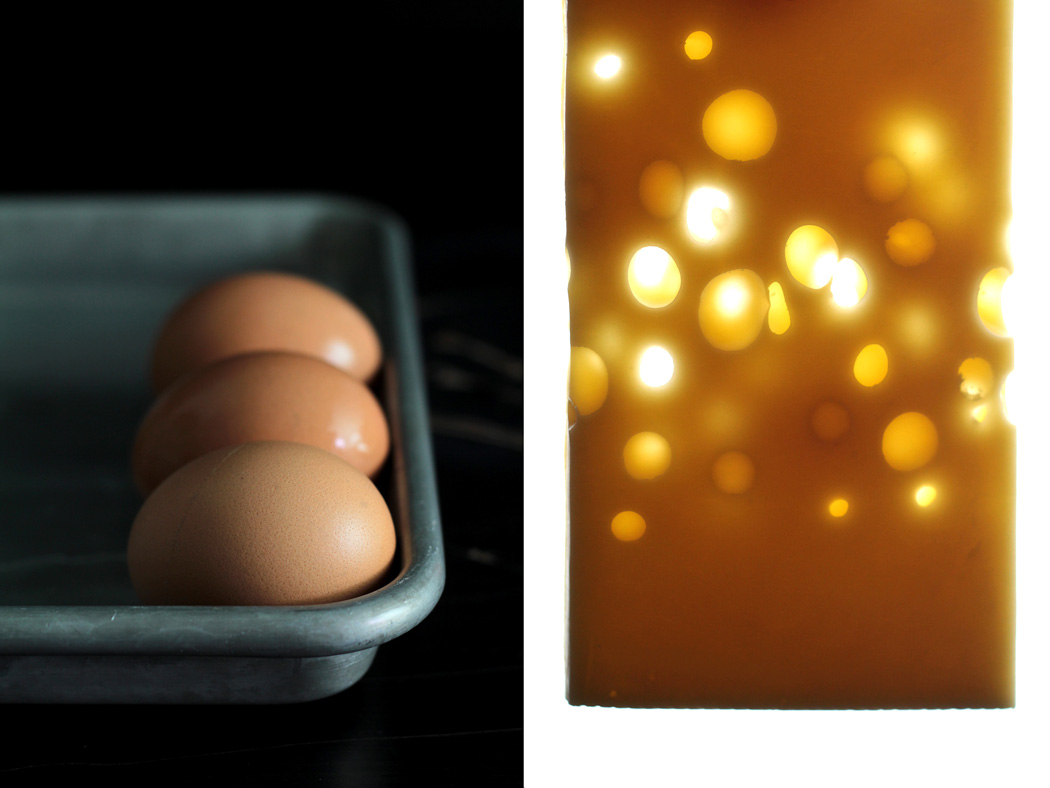 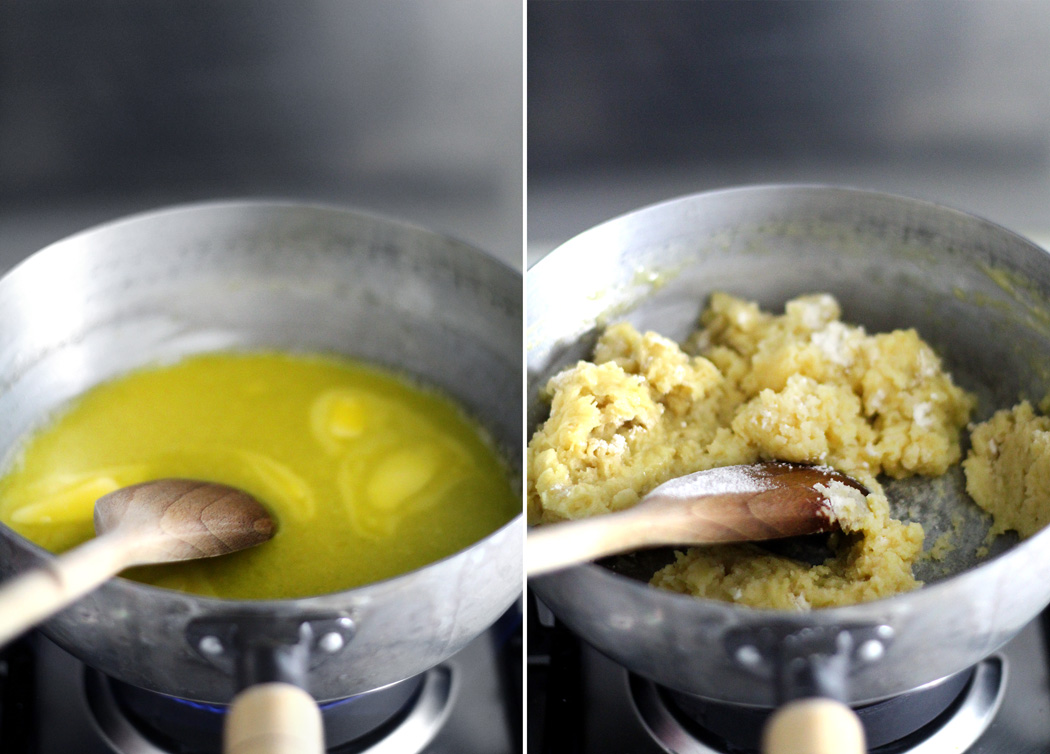 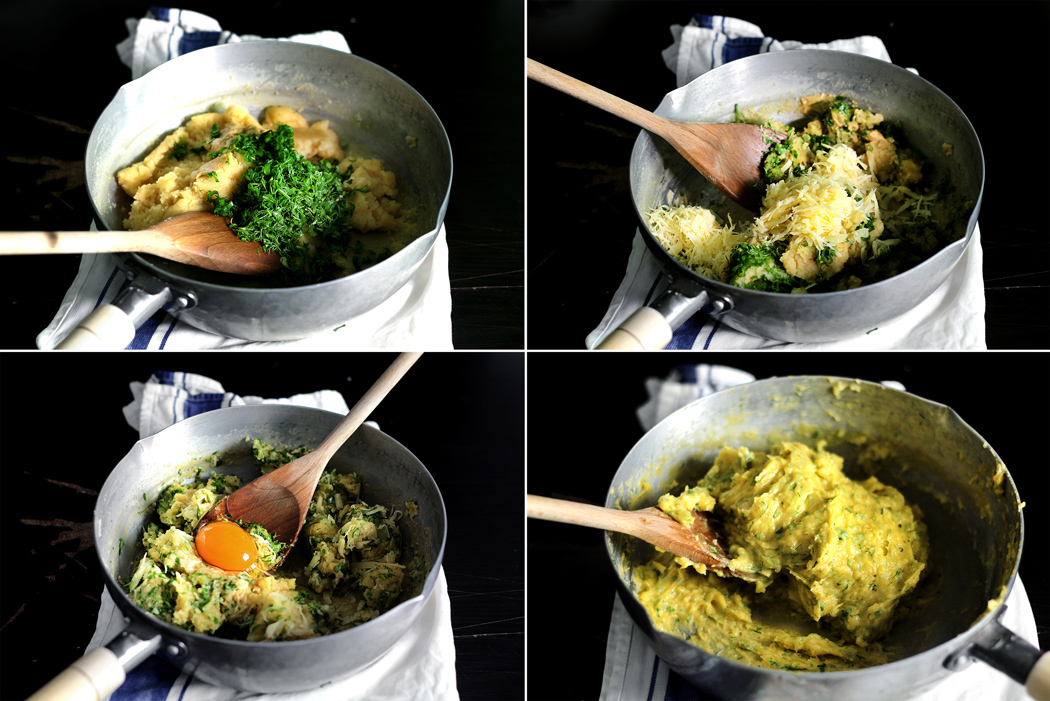 But I assume that most people, normal folks out there do consume greens on a regular basis and so to them, this would be about those “best damn” gnocchi and so that’s where I’m gonna start.  Let me just clarify first that I’ve never quite understood gnocchi, and when I say gnocchi I mean the Italian kind.  The kind where cooked potatoes or ricotta, eggs and flour come together to yield some  fluffy, light, and cloud-like mini nodules to go with various sauce.  I strangely never got that.  And from what I’ve heard, it isn’t the most foolproof thing to make either if one wants to achieve all those wonderful quality it carries.

Fortunately, for me at least, Italian gnocchi’s got a cousin.  Have you heard?  It’s French, too.

When I first opened my shiny and new Bouchon’s cookbook by Thomas Keller many years ago, and witnessed him squeezing what was essentially cream puff-pastry in savoury form out of a piping-bag, right into hot water like a mad man and called it “Parisienne gnocchi”, I was… instantly intrigued.  Could this be it?  Could the symphony of a butter-enriched dough with shredded cheese and herbs be the answer?  And yes, yes it was!  Four years ago at my first try, the amazing depth and flavours of these savoury pillows exceeded the expectation they had promised and then some.  They were soft but not mushy, firm but not dense, and good enough to be eaten all on their own without aids.  Do people know about this?  Why aren’t they everywhere by now?!  There’s no such outrageousness as a “modest French”!  And I’ve no idea why it only took me four years to tell you about it, but who’s counting? 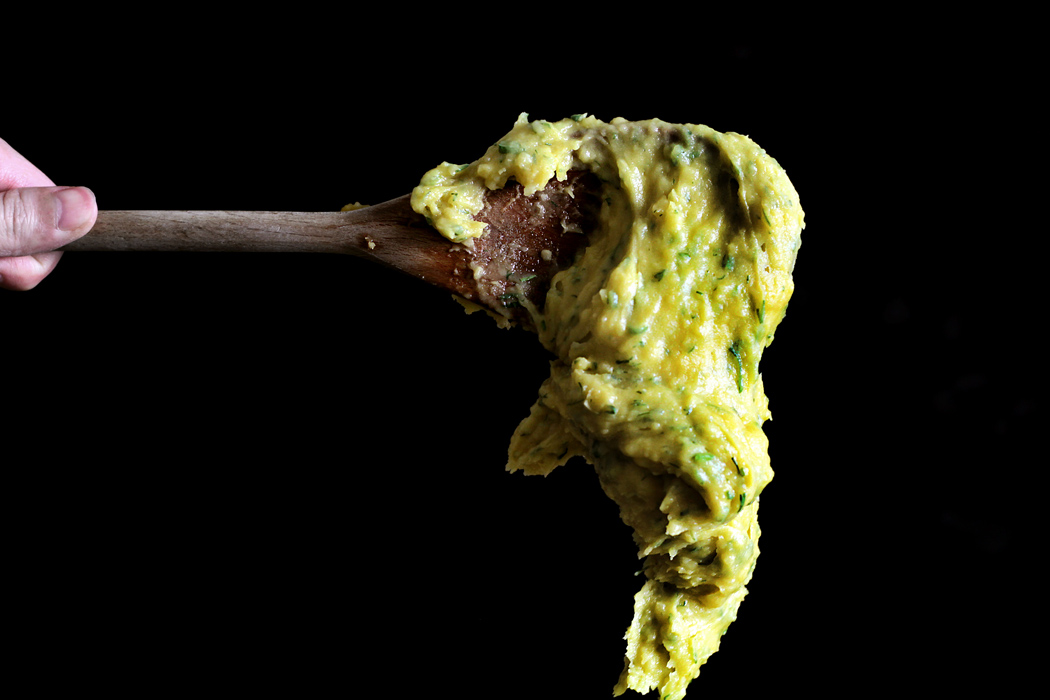 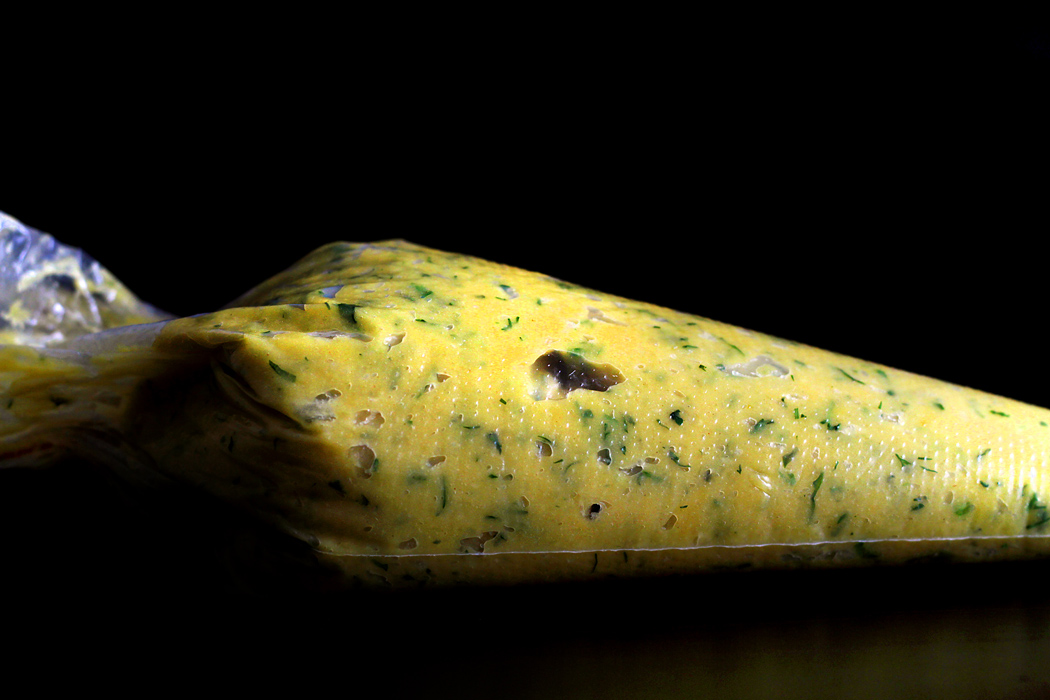 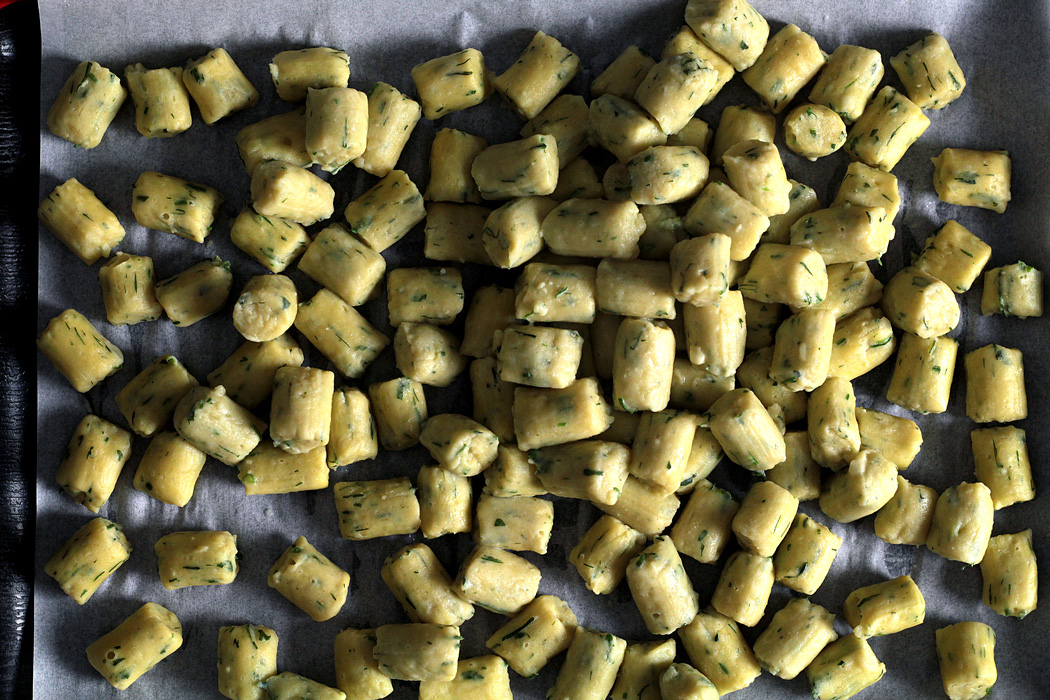 Like I said, these gnocchi don’t need nothing else to taste good.  A good pan-toasting in browned butter and some grated Parmigiano cheese is as good as any lazy dinner can get.  But the thing was… I had a bunch of kale sitting in the fridge.  Have I mentioned this?  I buy kale on a regular basis.  Shocking I know…  I buy kale the same reason some people donate to charities they’ve got no emotions invested in, as a guilt neutralizer, that as if somehow the random presence of dark leafy greens in my stock-pile could, physically and spiritually, cleanse my daily submergence in a sea of red.

But yesterday, a revelation took place.  I had discovered that the leafy part of kale, when thinly sliced then sautéed, could taste subliiiimmme!  All it ever needed is a good hefty load of fatty ground pork butt and briny anchovies, browned together until pork fat starts to release.  Which was then used to cook with earthy mushrooms and peas, then swimming happily together in a sauce enriched with mushroom water, chicken stock, crème fraîche and melted Parmigiano cheese.  Then, finally tossed together with butter-toasted cheese and herb gnocchi.  That’s ALL it ever needs to taste good!  Kale!  Who knew!

Ugh!  You’ve got to try this.  It’ll change forever how you feel towards gnocchi, or kale for that matter, or… I dunno, everything!  Crazy crazy stuff. 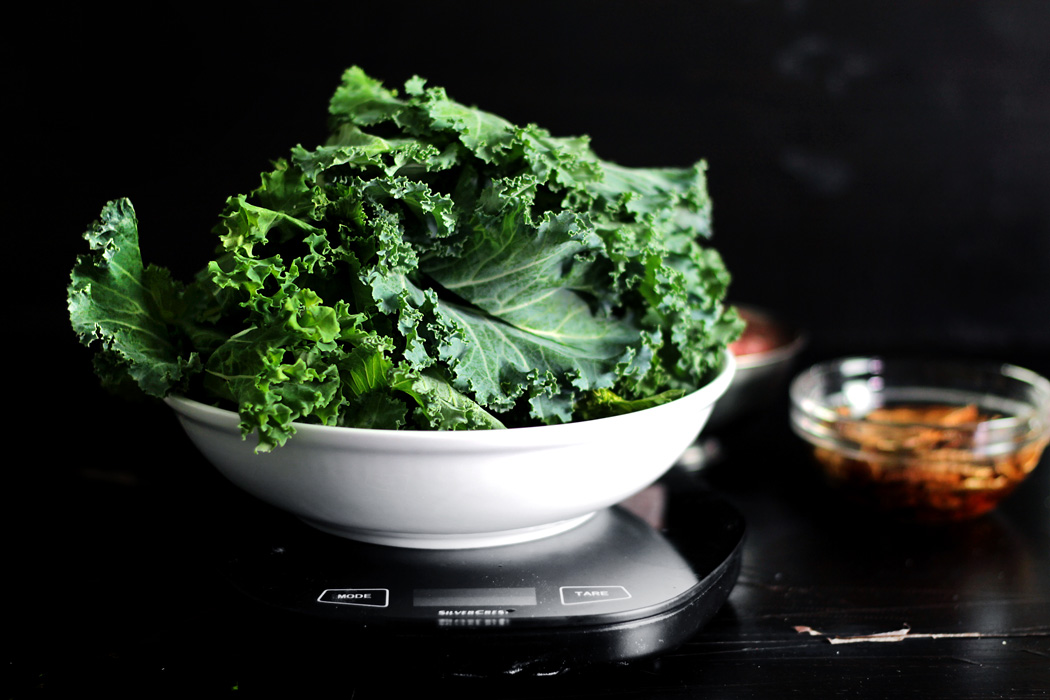 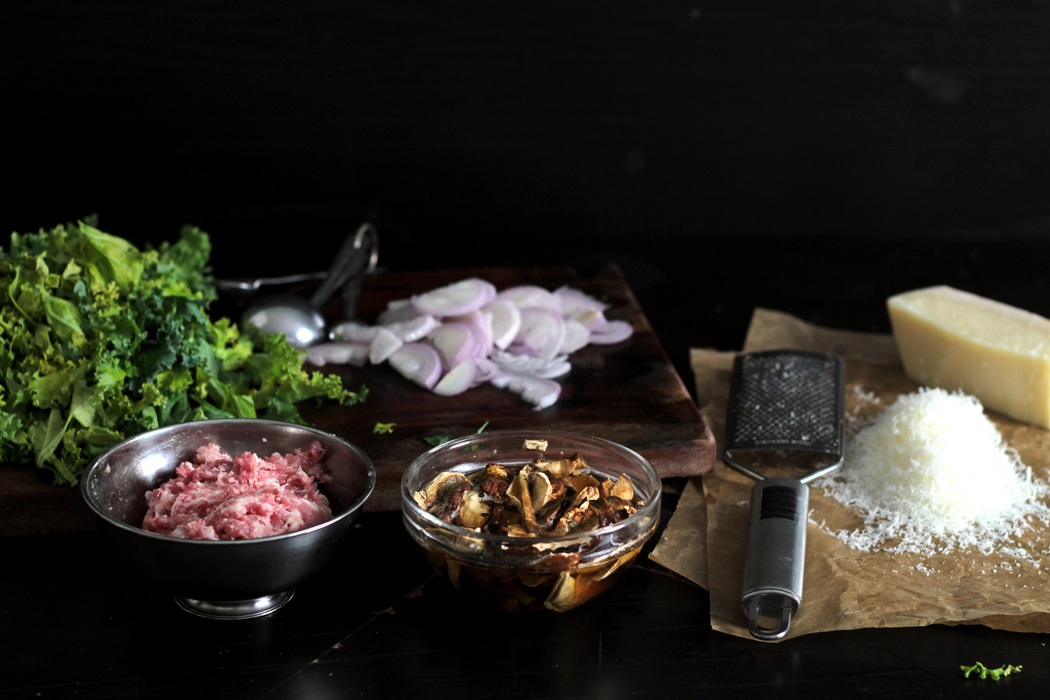 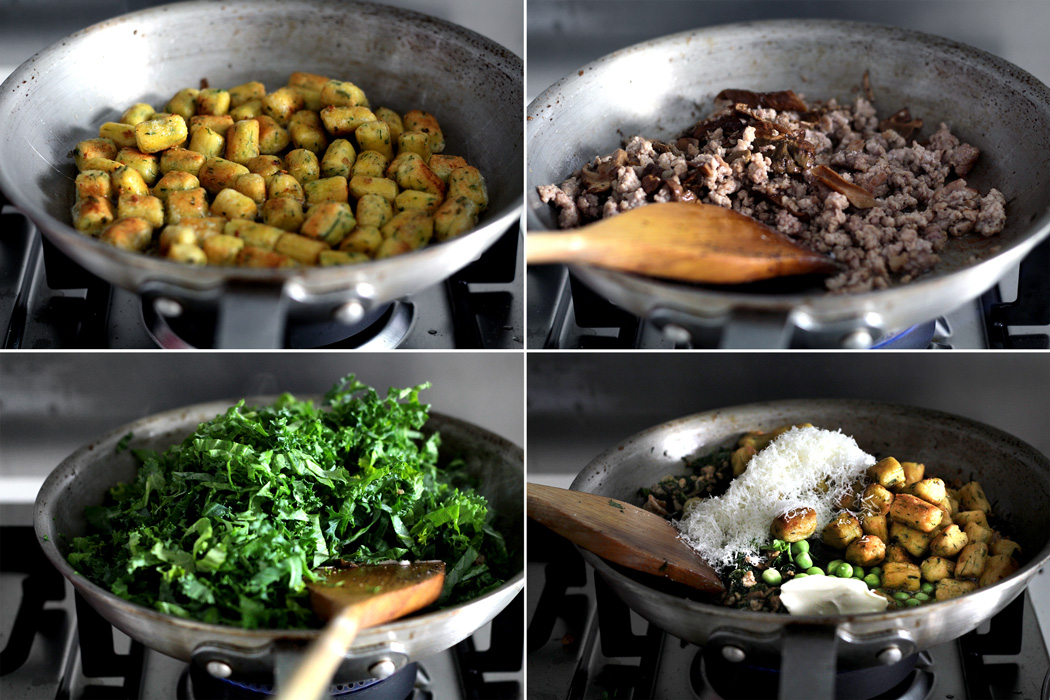 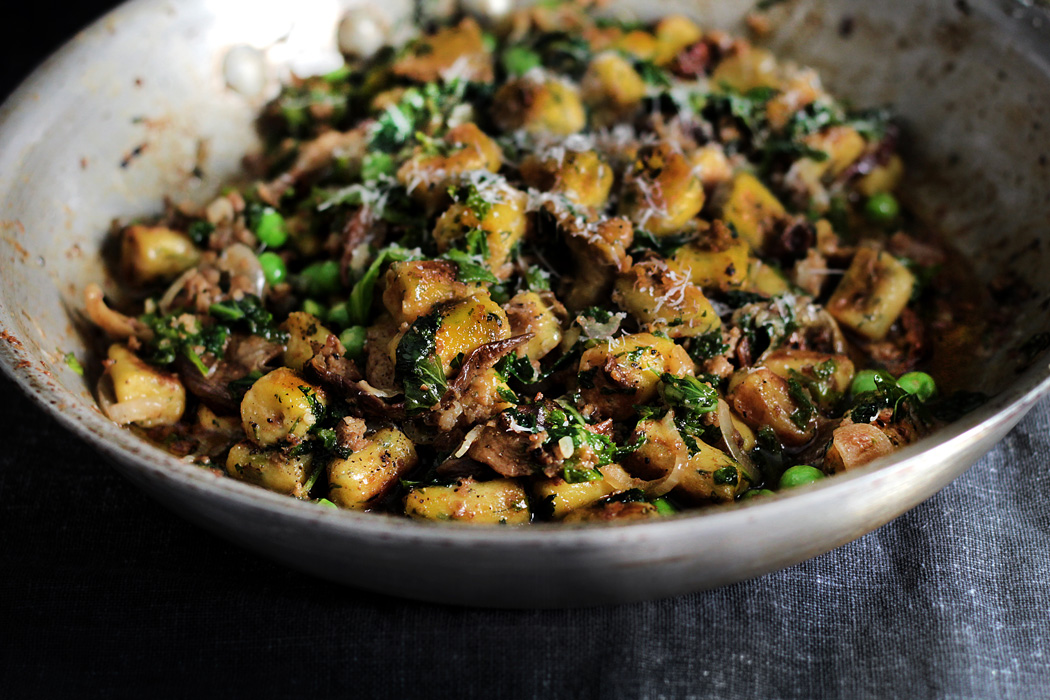 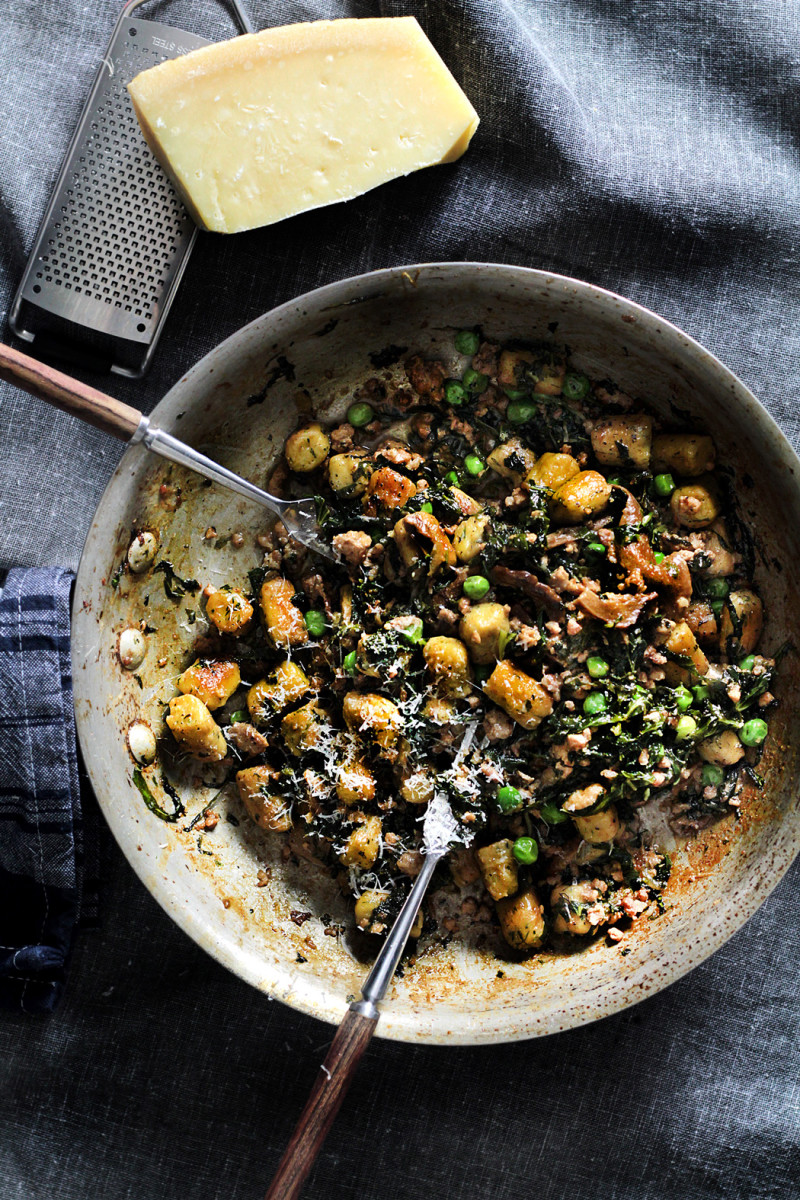 The gnocchi dough is essentially made from the mother-dough, pâte à choux, which makes cream puffs.  Recipes typically ask to transfer the cooked dough into another container or stand-mixer to further incorporate the eggs and whatnots.  But I’d like this to be a “one-bowl” gnocchi… so I just quickly cool the pot in cold water, and using it as the “mixing bowl” to save myself some work.  I don’t really find much difference in the final textures by doing it this way.  Plus, a quick soak in hot water and a little wash, the pot can be used to poach the gnocchi again.

Herb gnocchi (can be made the day before):  adapted barely from Thomas Keller’s Bouchon Cookbook

Have all the ingredients prepared and ready to go on the side.  Make sure all the herbs are super-finely minced so the gnocchi can be cut neatly later).

Combine water, unsalted butter and salt in a large pot and bring to a simmer over medium-low heat (to prevent too much water-evaporation before the butter melts).  Once the butter has completely melted, add the flour all at once, and stir with a wooden spoon until the mixture is even and comes into a glossy and smooth dough.  Continue to cook the dough over medium-low heat for a couple min, until a thin coating starts to form at the bottom of the pot (but not browning).  Remove the pot and cool it inside the sink filled with shallow, cold water (make sure the water doesn’t overflow into the pot).  Once the pot is cool enough to touch, move it back to the counter over a clean towel.

Add Dijon mustard, minced chives, mined fennel leaves and minced coriander leaves, then mix evenly with a wooden spoon.  Add the shredded emmental cheese and mix evenly again.  Add 2 large eggs, one at a time, and mix it into the dough until completely smooth before adding the next (you might find a fork being more useful than a wooden spoon here).  Then add the third separated egg yolk, mix until smooth, and check the consistency.  A scoop of the dough on a tilted wooden spoon should fall down very very slowly.  If it doesn’t move and seems too stiff or dry, add just 1 tbsp of the separated egg white to adjust.

Transfer the dough into a piping-bag and let rest at room-temperature for 30 min.  Bring a pot of water with a good pinch of salt to simmer.  If you are using disposable piping-bag like me, cut a 3/4″ (2 cm) opening at the tip, or fit a reusable piping-bag with a plain-tip.  Keep the water at a very gentle simmer, then squeeze the dough out of the piping-bag while “cutting” it into the water with a small knife.  If the dough is sticking to the knife, just dip the knife in the hot water then continue.  Poach the gnocchi for another 1 ~ 2 min after they’ve floated to the surface of the water, remove with a slotted spoon and do the next batch.

Evenly scatter the gnocchi on a parchment-lined sheet and refrigerate until needed or up to 1 day, or flash-freeze them until hard and keep in an air-tight container in the freezer (thaw for a couple hours before using).

Herb gnocchi w/ mid-season vegetables (for 2 servings only so double if making for 4):

* It’s important to season the ingredients as they go in the skillet.

Mix the fatty ground pork with 1 tsp of cornstarch until even, set aside.  Rinse the dried shiitake mushrooms under water to rid of any sands and dirt, then soak in 3 tbsp of hot water for 15 min (or add 3 tbsp of cold water and microwave for 45 seconds), then remove the mushrooms, set aside, and reserve the soaking-water.  Trim off the stems of kales, using the green leaves only and finely slice them.

Heat up a large, flat skillet over medium-high heat (use non-stick if in doubt), then add the unsalted butter.  Once it starts to brown slightly, add the gnocchi and pan-toast them until nicely browned on both sides.  Transfer to a plate.  Add 1 tbsp of extra virgin olive oil in the skillet and the anchovy fillet, break it up with a wooden spoon until it melts into the oil.  Add the ground pork, breaking it up with a wooden spoon and cook until evenly browned.  The pork should start to release/render out a little bit of its own fat (if it doesn’t, your pork is too lean).  Add the sliced shallots and shiitake mushrooms, season with salt and ground black pepper and cook until the shallots have soften.  Add the sliced kale leaves, season again with salt and ground black pepper, and cook until slightly wilted.  Add the fresh peas, reserved mushroom water and chicken stock, and scrape the bottom of the skillet if there are brown bits stuck on it.  Add the grated Parmigiano cheese and creme fraiche and let melt into the sauce, then taste and re-season again.  Finally, add the pan-toasted gnocchi and toss to combine.  Cook over high heat for a few more seconds to reduce/thicken the sauce if needed. 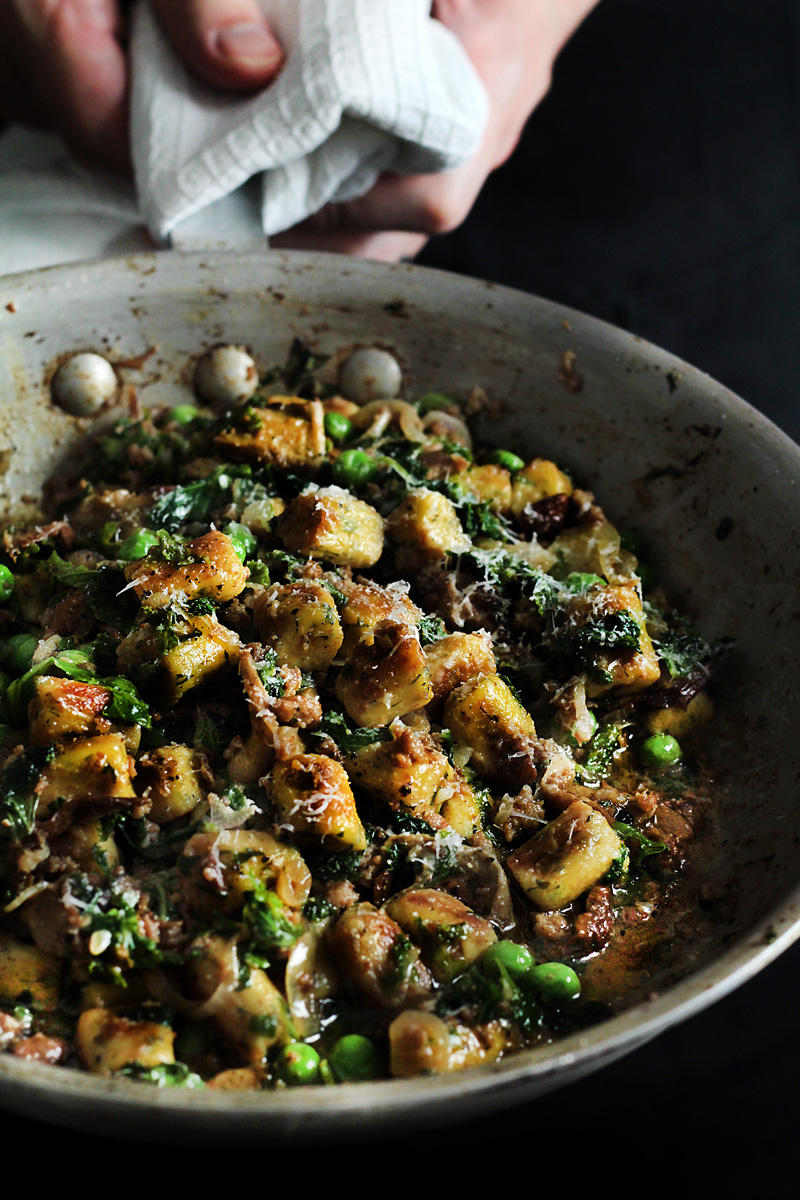