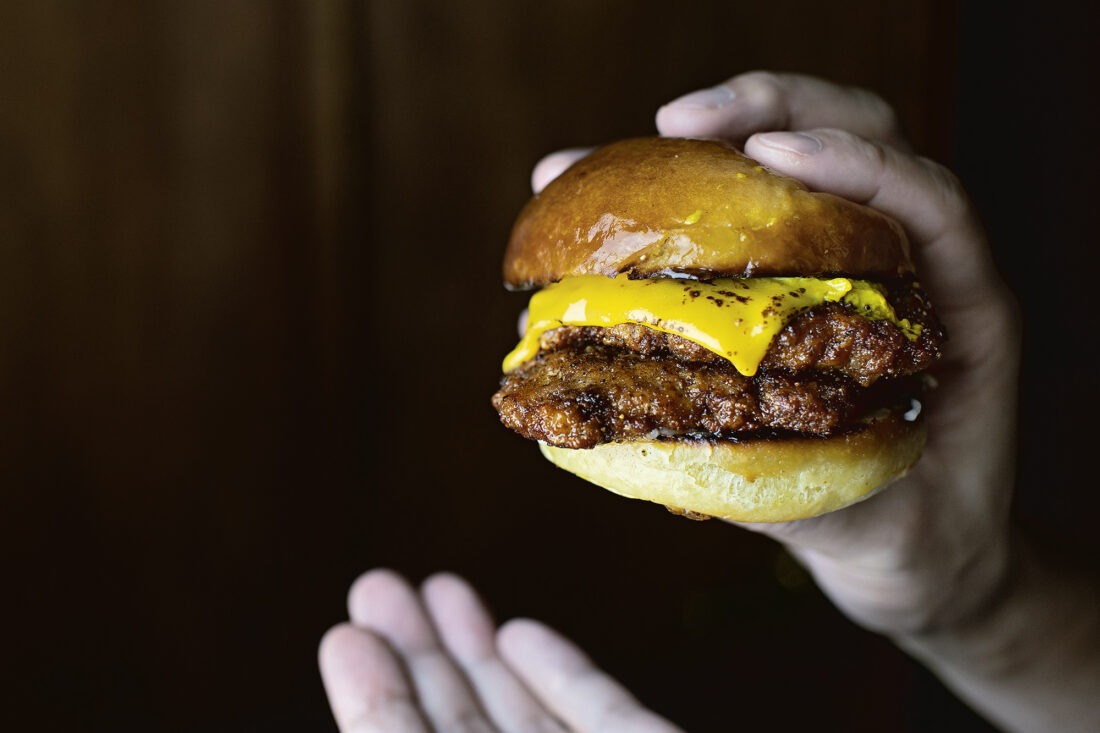 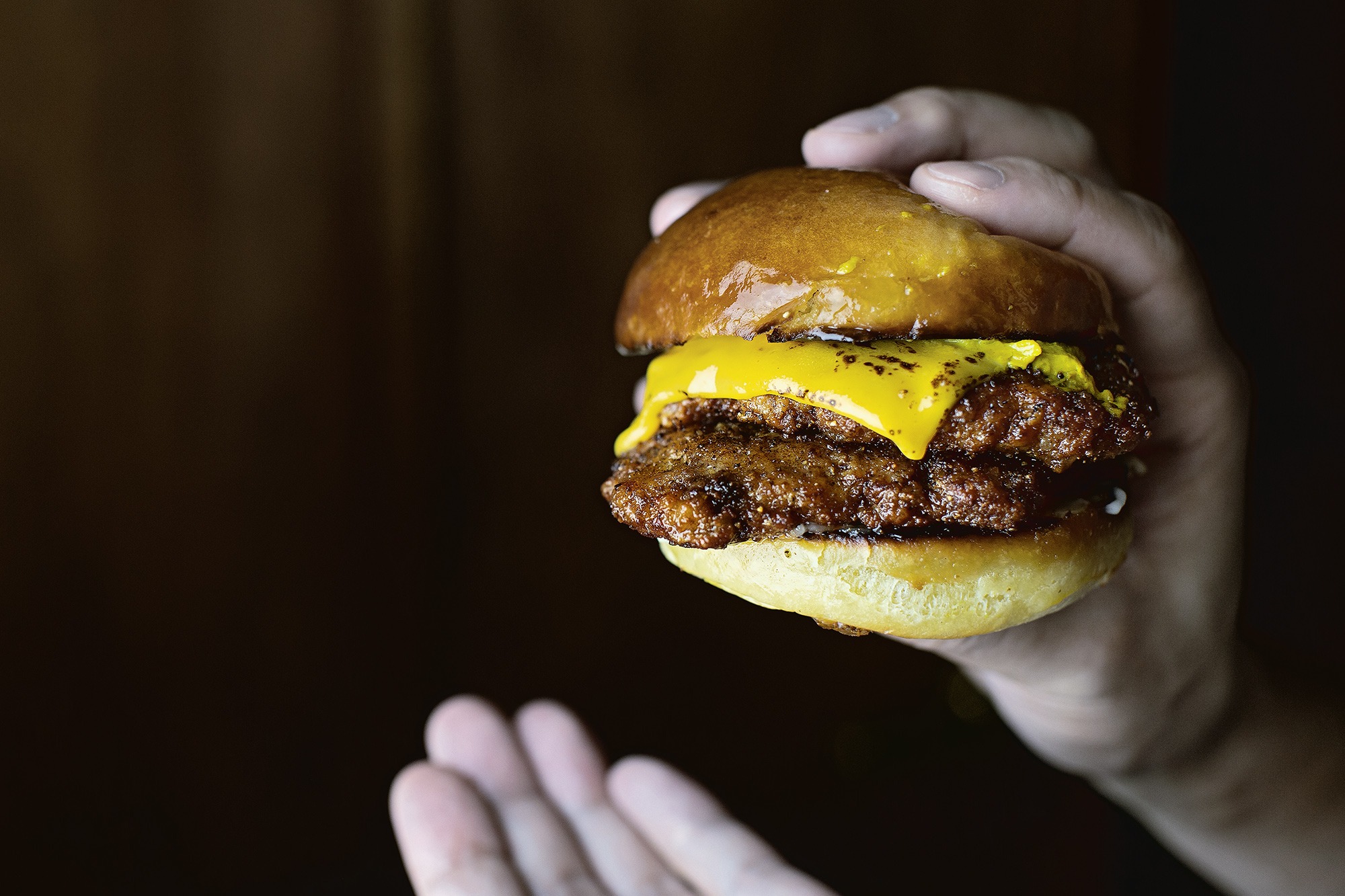 ”  the wonder of chicken is that, even though the meat lags behind pork and beef in intensity, its cracklings on the other hand, are incredibly potent and explosive.  …these itty bitty fragments of fat caramelize and crisps into powerful flavor pellets where bright rays of chickeny-ness are released when crunched through in your mouth.  “

There are many reasons, perhaps good reasons, why humans can’t seem to shake the global spell of beef burgers even in the wake of the negative effect of raising cattle has on climate change.  We as a remarkable species have never backed down from the challenge of a good self-destruction, let alone that in this rare instance, it isn’t absolutely senseless.

For one, out of the few domesticated livestocks we grow for meats, beef, seems to persistently transcend in the robustness of aroma and flavors when its proteins and fats undergo the maillard reaction of browning.  In plain English, meats taste good, but beef seems to taste best.  Secondly, it’s hard to go to a supermarket without bathing in the seduction of see-through packaged ground beef sold in wide open isles in bulk at a reasonable pricing.  Gushing and bloody, they are everywhere at anytime in close proximity where carnivores in practice or in relapses lurk.  Urge plus convenience, its recipe for success isn’t exactly a mystery.  And that is because, last but not least, beef is big money.  It is a hundreds of billions of dollars industry globally, with none other than USA leading the parade as the biggest beef producer followed by countries like Brazil, China, Argentina and Australia.  It doesn’t take a meat eater to explain.  A Buddhist economist could tell you why beef burger is one of the most successful American cultural exports.  Money money money.  Money.

When short-term pleasure is weighed against long-term peril, we humans can always count on ourselves to make the dumb choice.

That is unless, there is a feasible alternative.

No, I’m not talking lab-grown beef, not that it isn’t a promising and totally totally appetizing candidate.  I mean who wouldn’t be aroused by meat grown in a petri-dish?  No, today I want to focus on an option that has long been right in front of our eyes, that can compete in the convenience as well as economic viability of beef.  One that has been overlooked not for lacking in any of the above reasons, but simply because it hasn’t been thought of that way.

Before you leave the building, I’d like to shout as loud as I can that I’m not talking about store-bought ground chicken which you only ingested in a terminal stage before you reach the great beyond and reborn as a robotic calories calculator.  The difference between that ground chicken and my ground chicken is the single most under-valued asset of this noble bird, its secret weapon, its Trudeau’s hair.  Anyone who has ever rendered their own schmaltz, aka chicken grease, would know whole-heartedly of what I am about to unveil.  For everybody else, I’m talking about, the chicken skins.

Pork has chicharrón, and chicken has what I’d like to call, chicken cracklings.  It is the crispy remnant of an animal’s fatty mass – in this case the chicken skins – after its moisture and liquid grease is extracted by heat in a process called rendering, leaving behind tiny nuggets of crispy and golden browned brittles if you will, that is an intense condensation of flavors and aromas of its formal self.  But the wonder of chicken is that, even though the meat lags behind pork and beef in intensity, its cracklings on the other hand, are incredibly potent and explosive.  When properly mixed into the ground chicken for the purpose of a flat disk where contact surface area with the hot skillet is maximized, these itty bitty fragments of fat caramelize and crisps into powerful flavor pellets where bright rays of chickeny-ness are released when crunched through in your mouth.  I’m not saying it’s the same as a beef burger.  I’m saying it’s not but equally satisfying.  I crave one just now.

But a perfect burger is not just the patties.  Far from it.  The delicate balance between the texture of the buns, the ratio between components and flavors, sometimes perfection requires restraint more than generosity.  I’m a purist when it comes to burgers, especially this burger. The protagonist is the flavor and aroma of rendered chicken skins, and its voice comes through most vividly without distractions of “over-condimentation”. Simple mayonnaise for moisture, mustard for acidity and a single slice of cheese is suffice.  No onions or garlic powder, tomatoes or lettuce, because this burger (or most for that matter) does not benefit from a big party.

Now you can say nah, I prefer a good-old beef burger.  Hey I sometimes do, too.  But I don’t have children and never wanted one so you’re not shitting on my invested future.  Go to town.  But if you have second thoughts on that matter, then give this a try.  A win-win situation is rarely just a burger away. 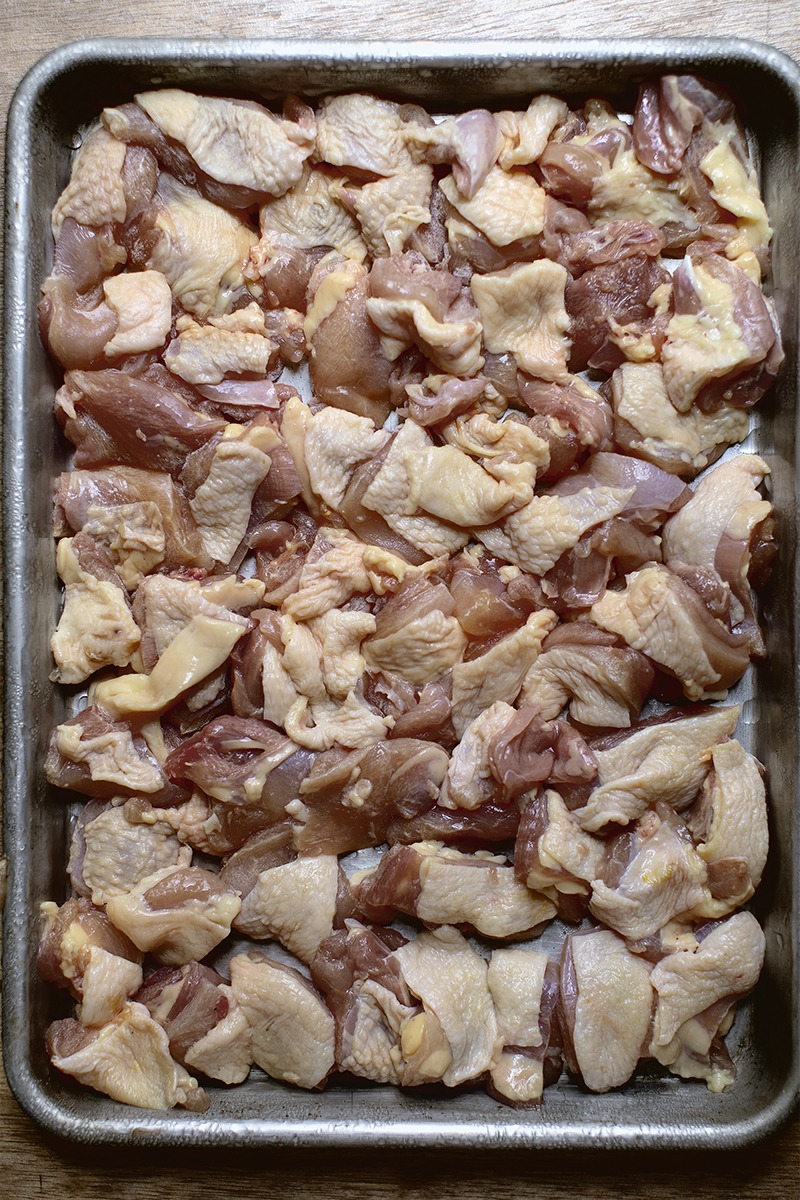 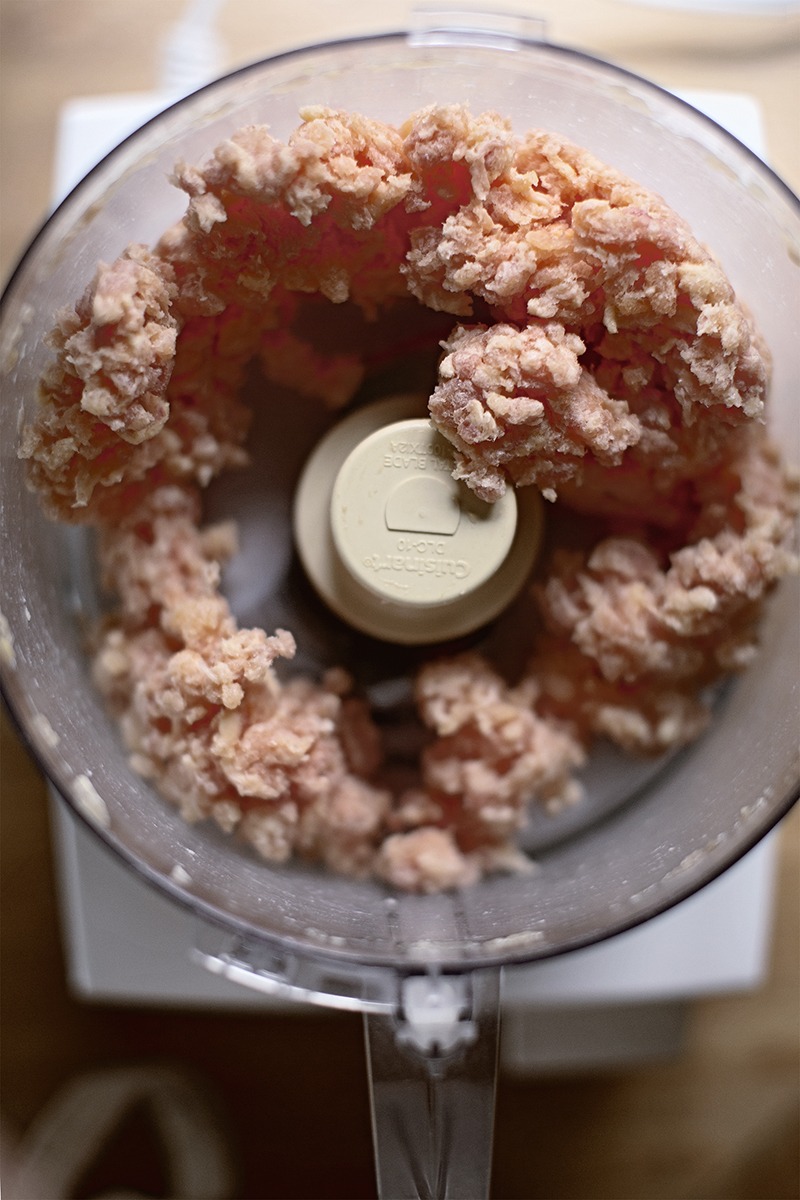 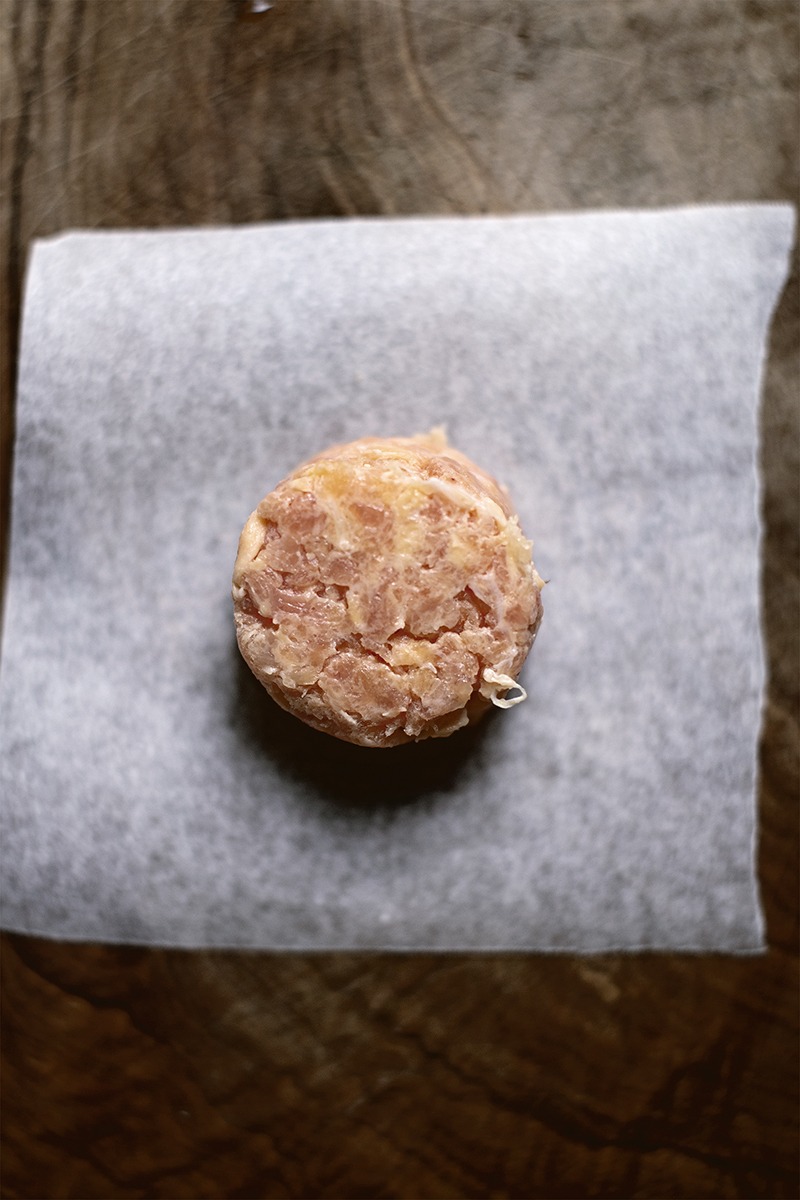 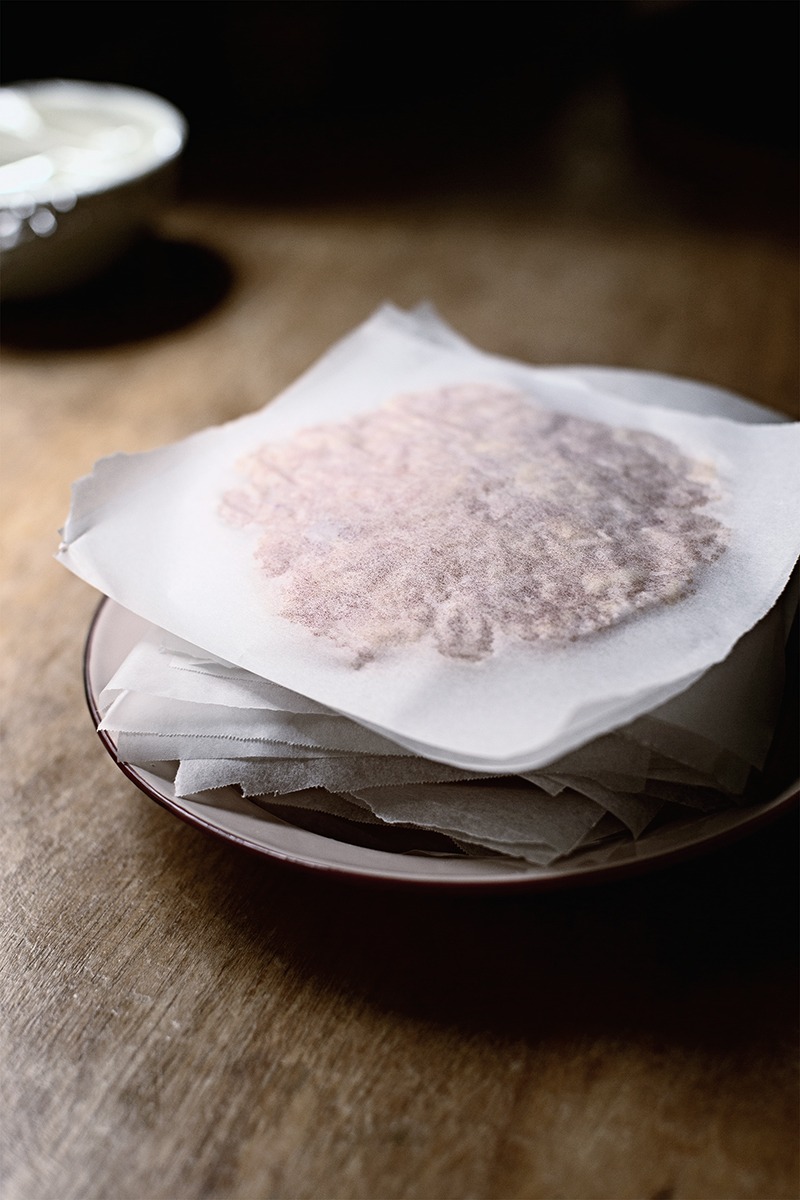 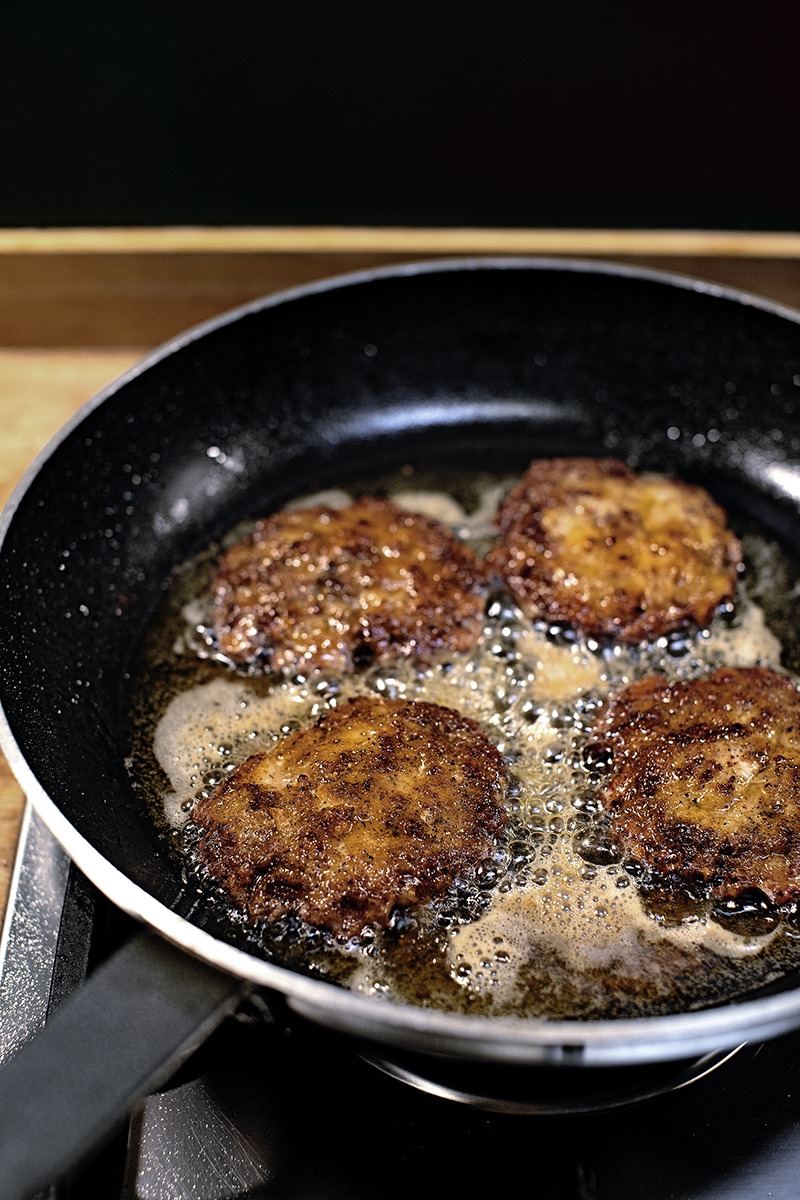 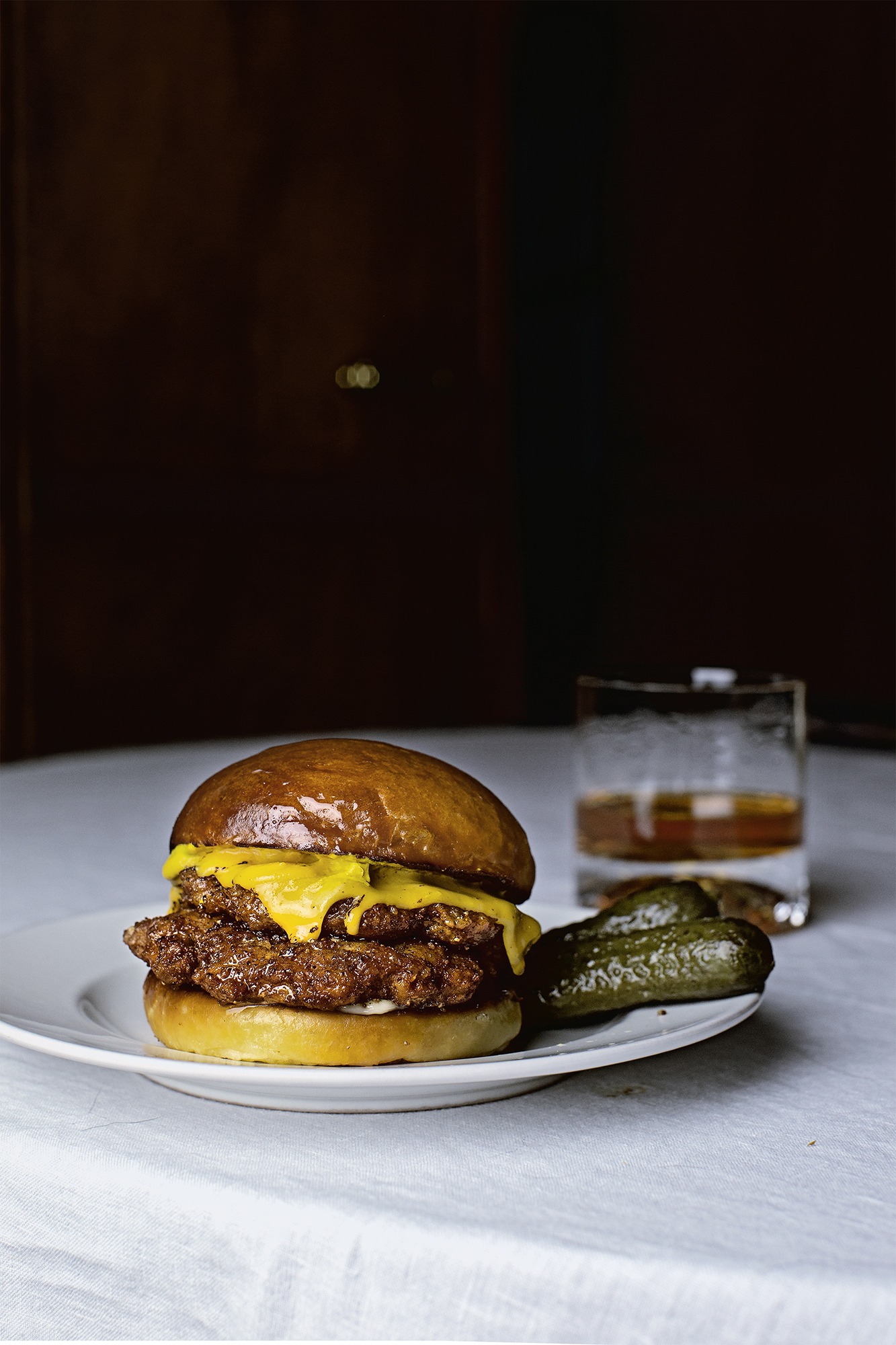 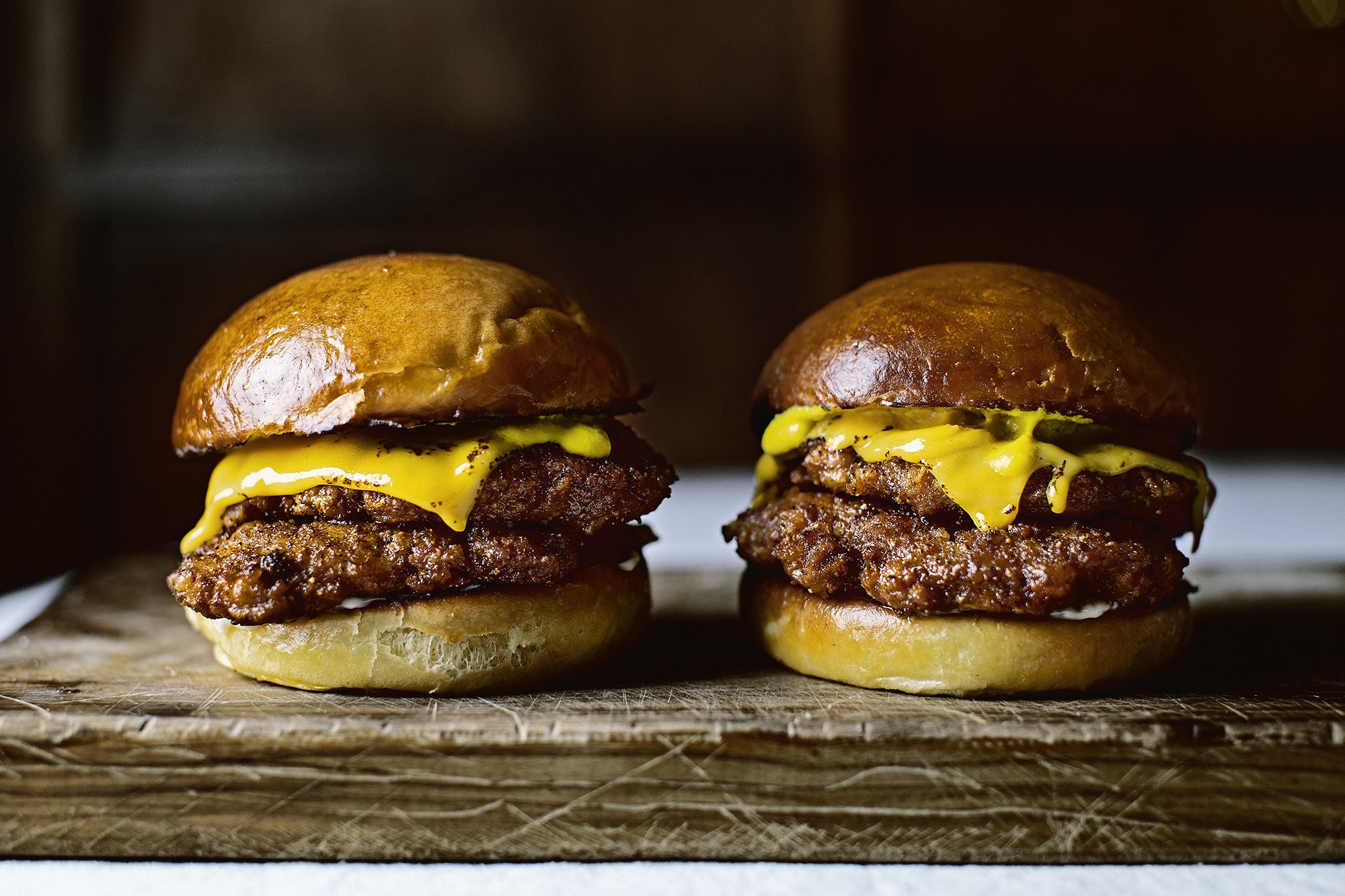 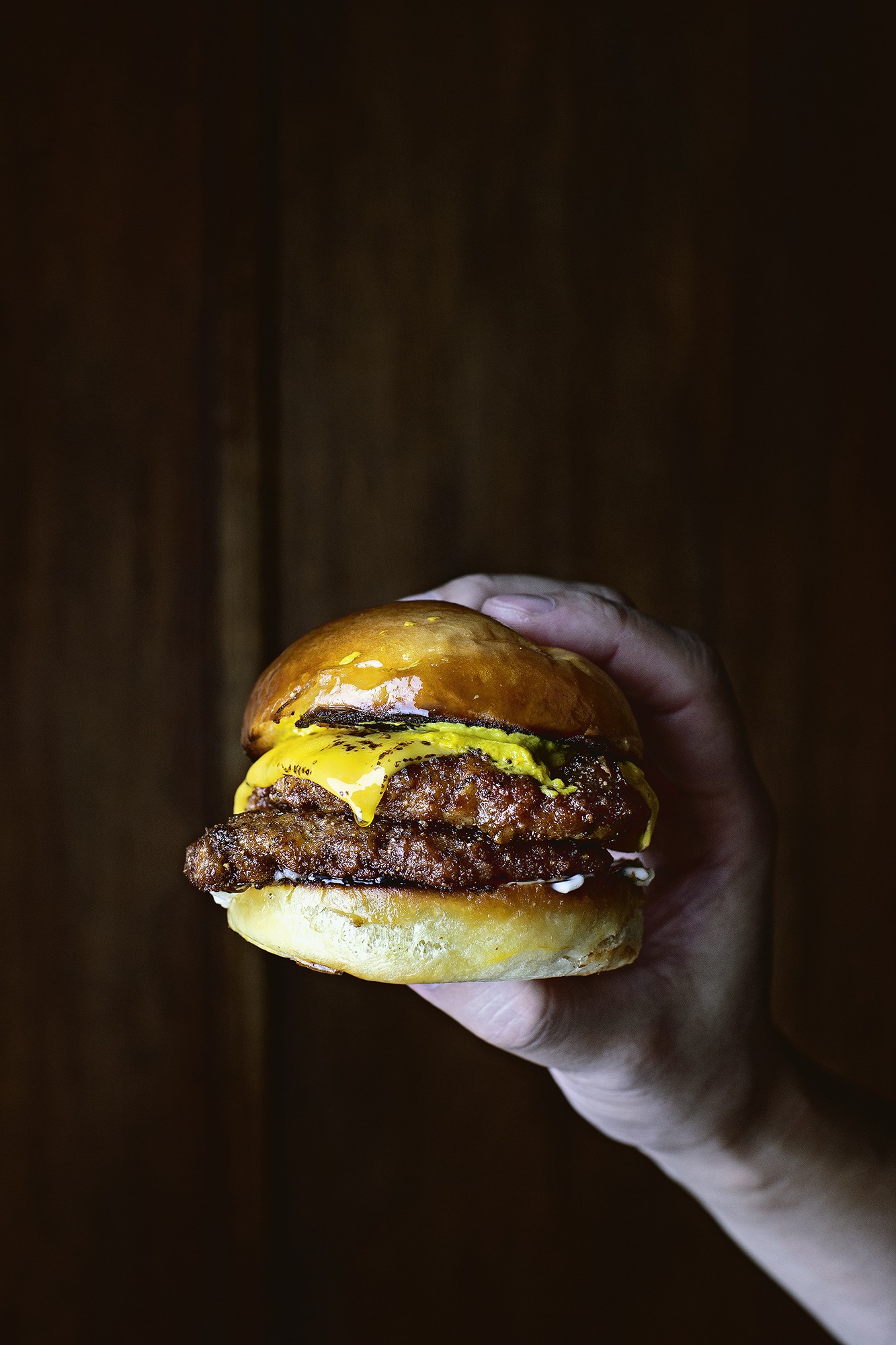 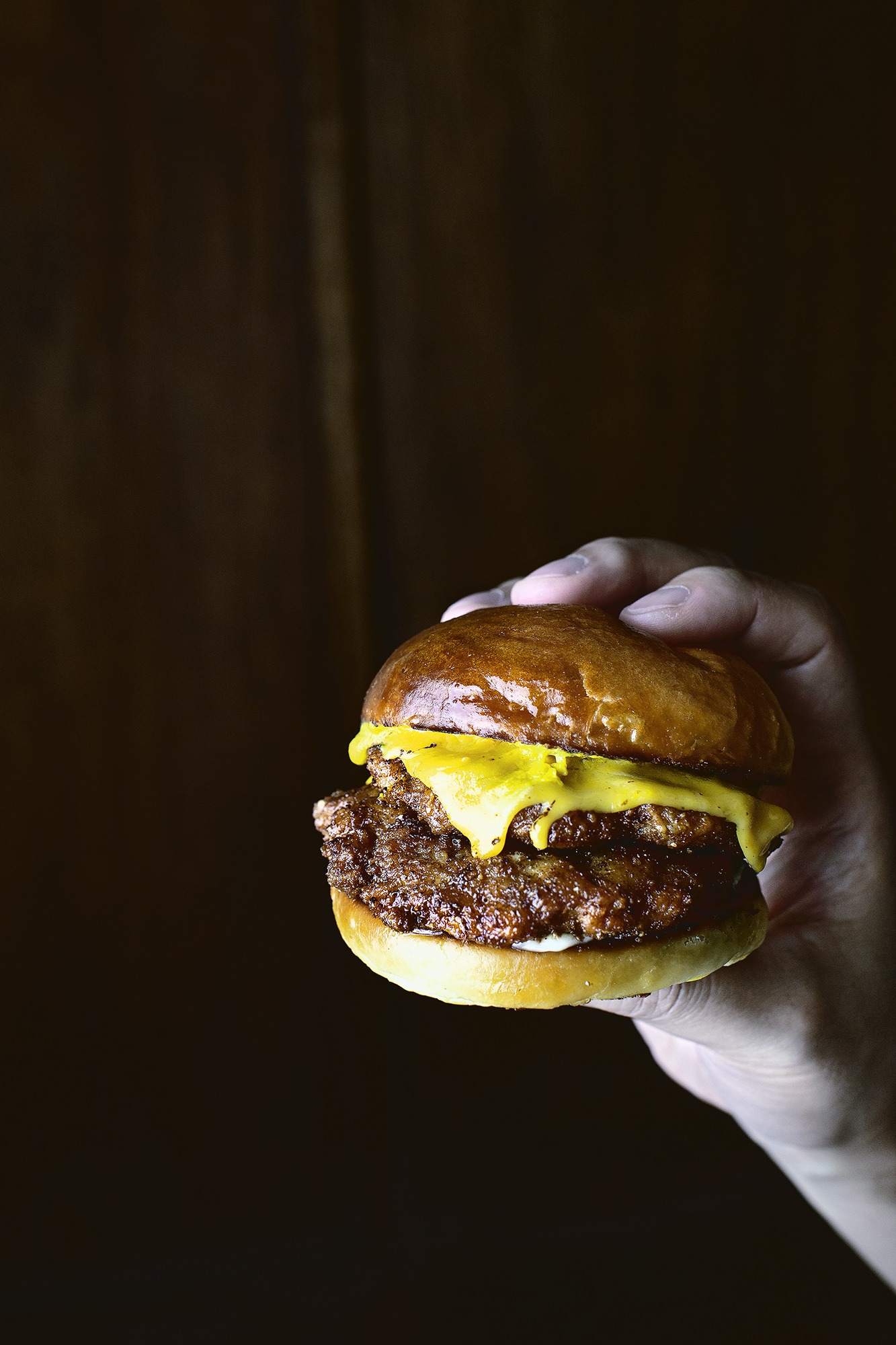 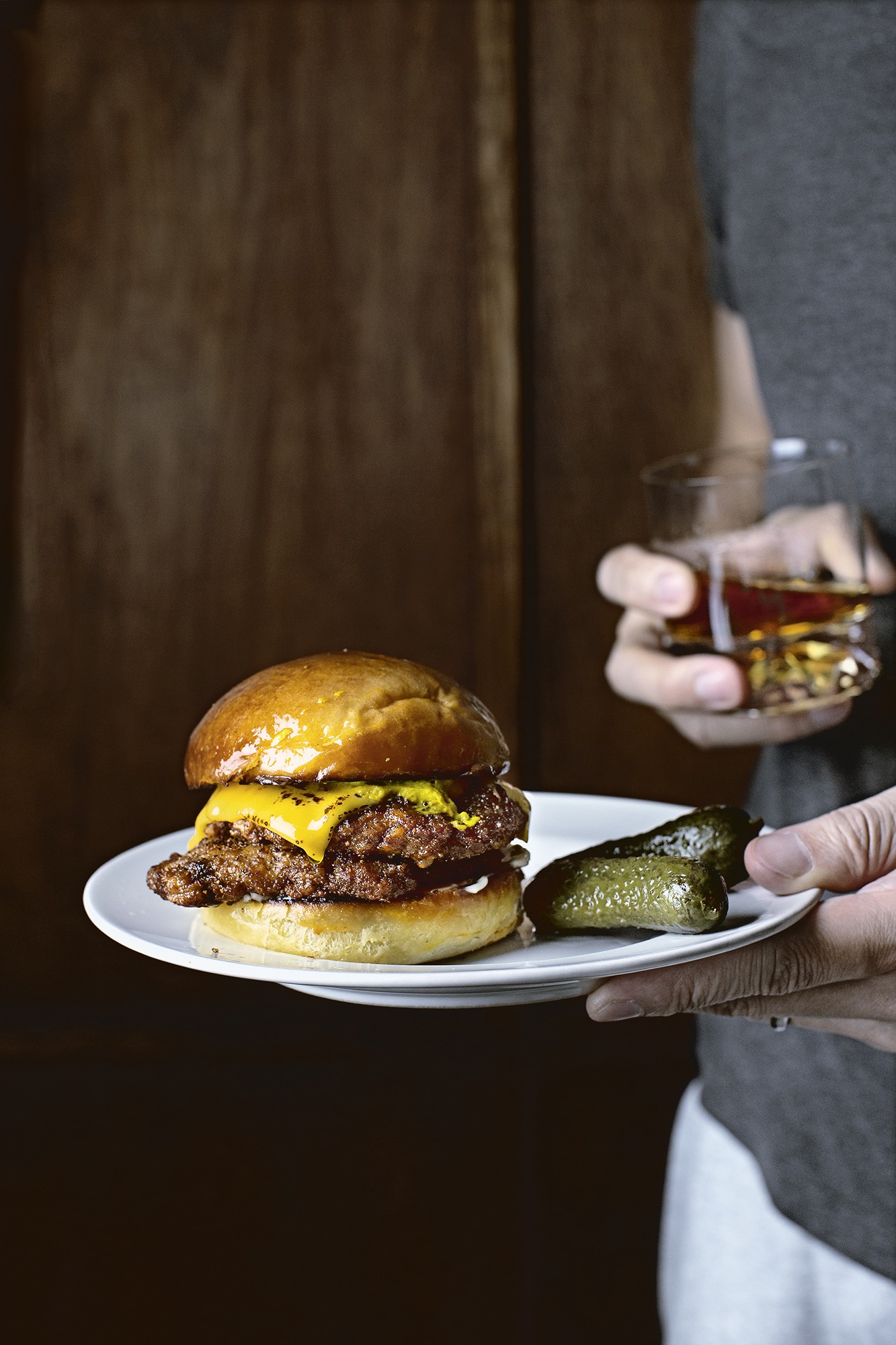 If you didn't read the text I'll say it again. I'm a purist when it comes to burgers, especially this burger. The voice of the protagonist is the flavor and aroma of rendered chicken skins, and it comes through most vividly without distractions of "over-condimentation". Simple mayonnaise for moisture, mustard for acidity and a single slice of cheese is suffice. Please restrain from adding onions or garlic powder to the mix because this burger does not benefit from a big party.

* Look, compared to any other types of meats, the taste of chicken is probably the most wide-ranging depending on its quality. Pale-skinned and white-fleshed chickens most commonly seen in American supermarkets are incredibly more tasteless and boring compared to yellow-skinned and almost red-fleshed chickens that are seen in Europe or Asia. If you want to pursue the best tasting outcome of this recipe, I'd urge you to source a better quality chicken in your area or at least free-ranged.