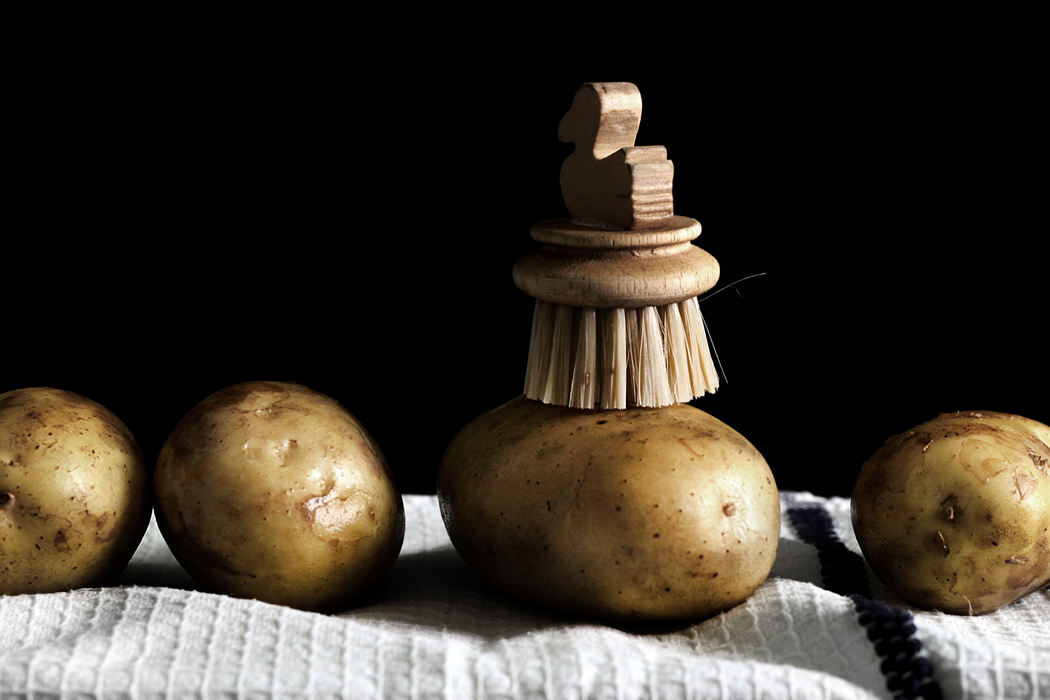 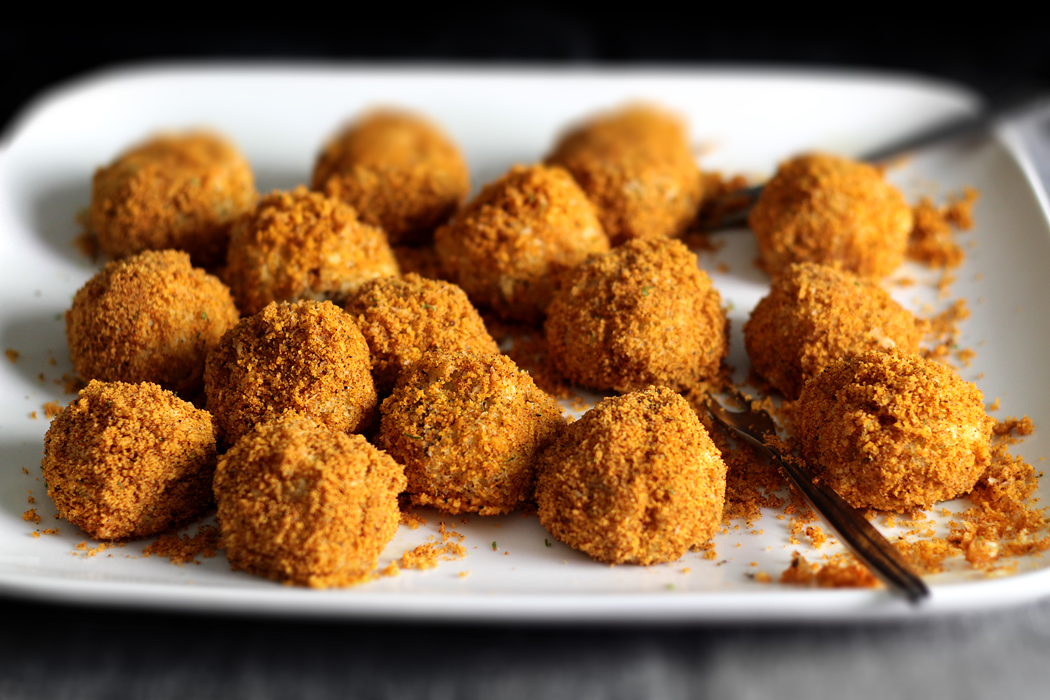 “A SEQUEL OF CHICK-FLICK POPCORNS…”

I couldn’t stop thinking about the color orange.

Not thinking about orange after the revelation of homemade cheese powder for this white cheesy popcorns, is like ignoring the bigger and prettier elephant in the room.  You know you thought the same.  So let’s just take a moment to put this unnatural, unhealthy, un-anything-you-should-really-eat-or-let-alone-making-at-home idea aside, before we can get back to eating real foods.

Shall we?  A sequel of our chick-flick popcorns – the orange stuff that would make cardboard taste good. 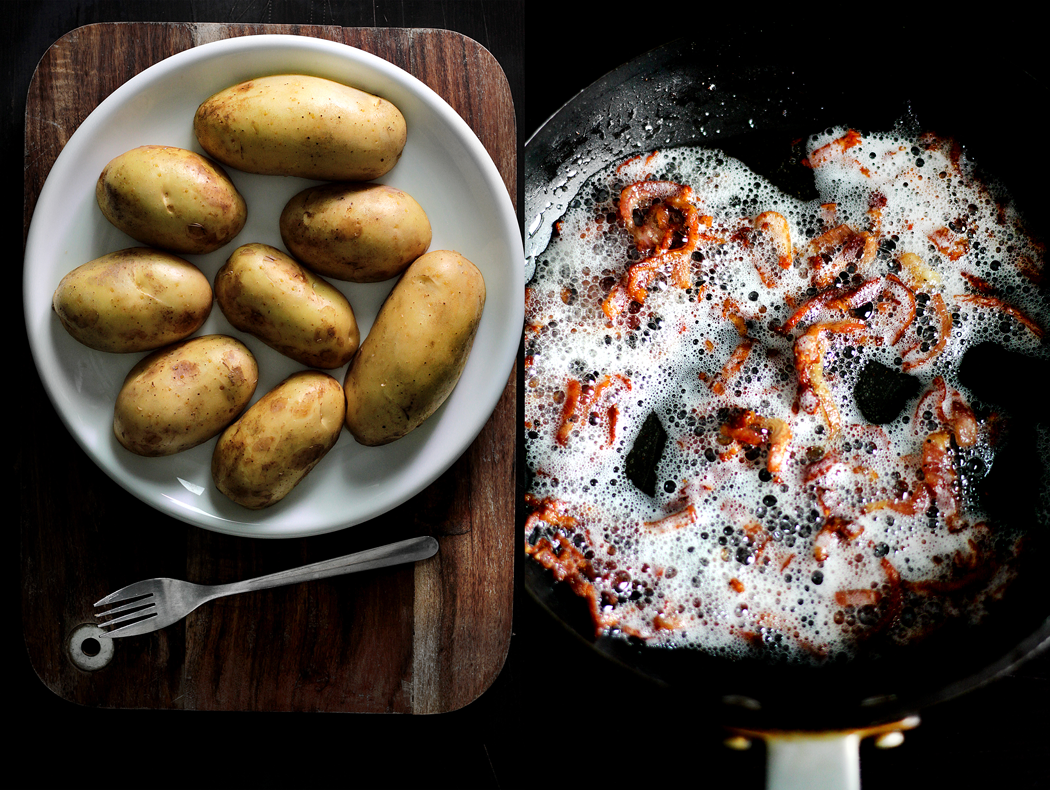 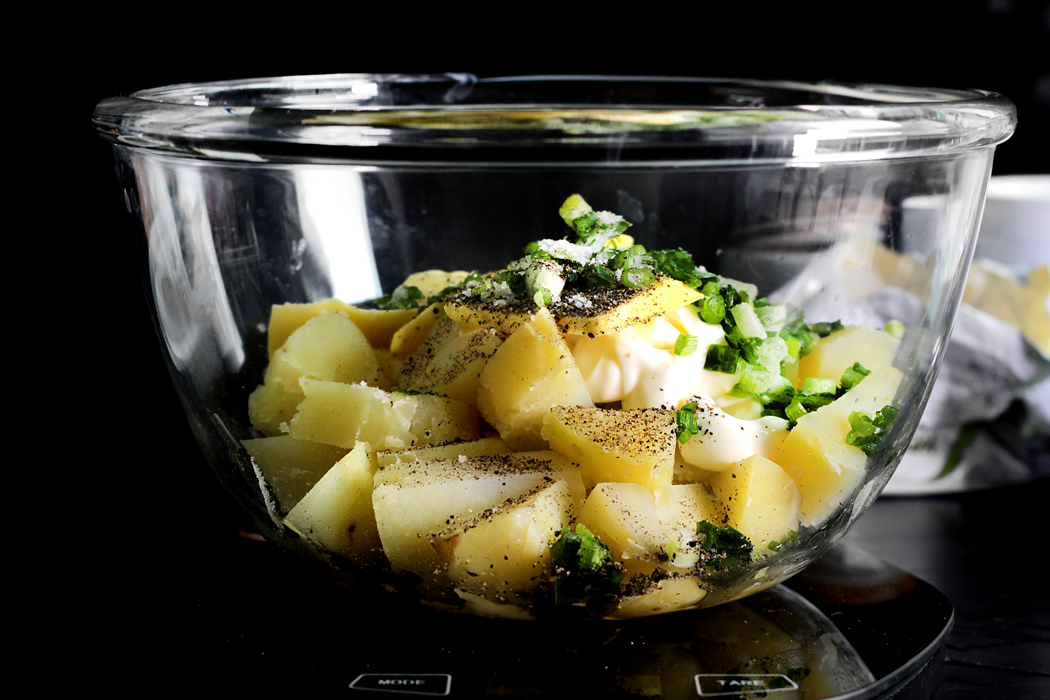 The neon-orange cheddar which I was told isn’t real cheese, is the only logical progression after discovering that one could effortlessly leave grated cheese in the fridge to air-dry which then makes pulverization possible.  Tah-dah~ homemade cheese powder, may come as a very “inconvenient truth” to some.  But to be annoyingly curious, if I were to go beyond drying/powdering real cheese, down the route of  messing with factory-dyed brick of flaming orange, then why not just purchase myself a nice bag of industrial-grade magic dust for quickness sake?  Well, hah, as it turns out that those cheese powder are fake as well… containing not much “cheeses” that aren’t even “real” to begin with!…  Oh wow, it’s like Ann Hathaway wearing the skin of Taylor Swift giving an acceptance speech it’s fake on fake.  I mean jeeez, is it too much to ask for some real fake orange cheddar powder if I may?

The answer is yes, yes I may. 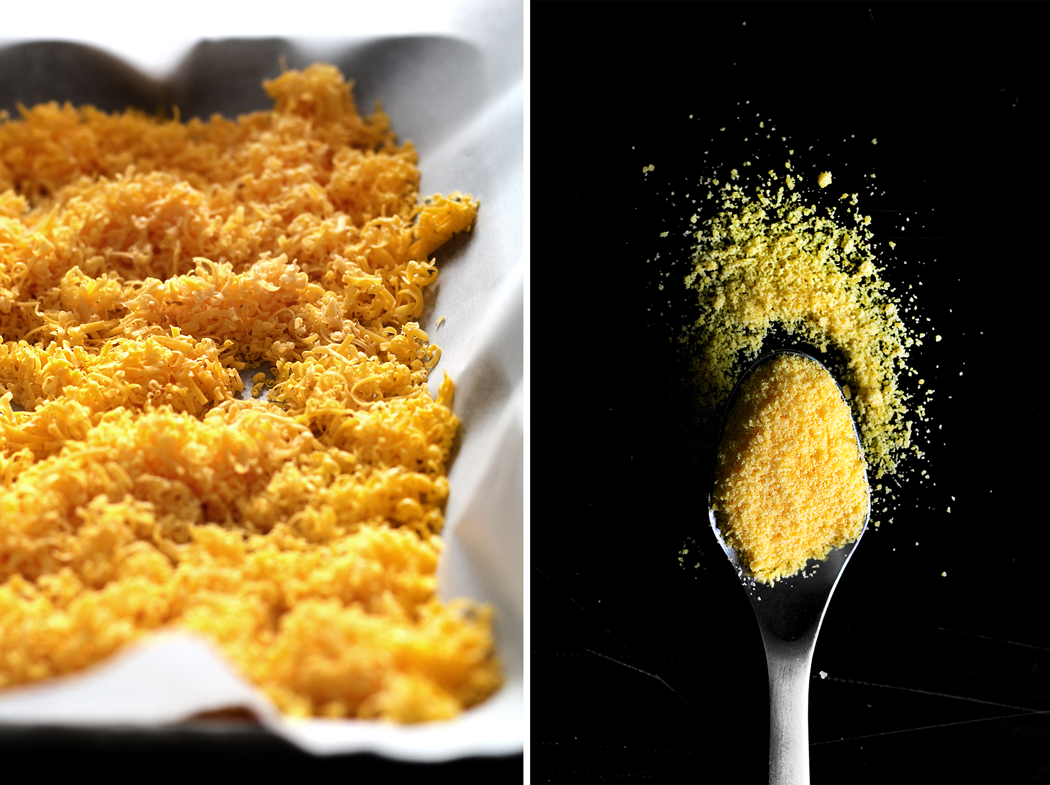 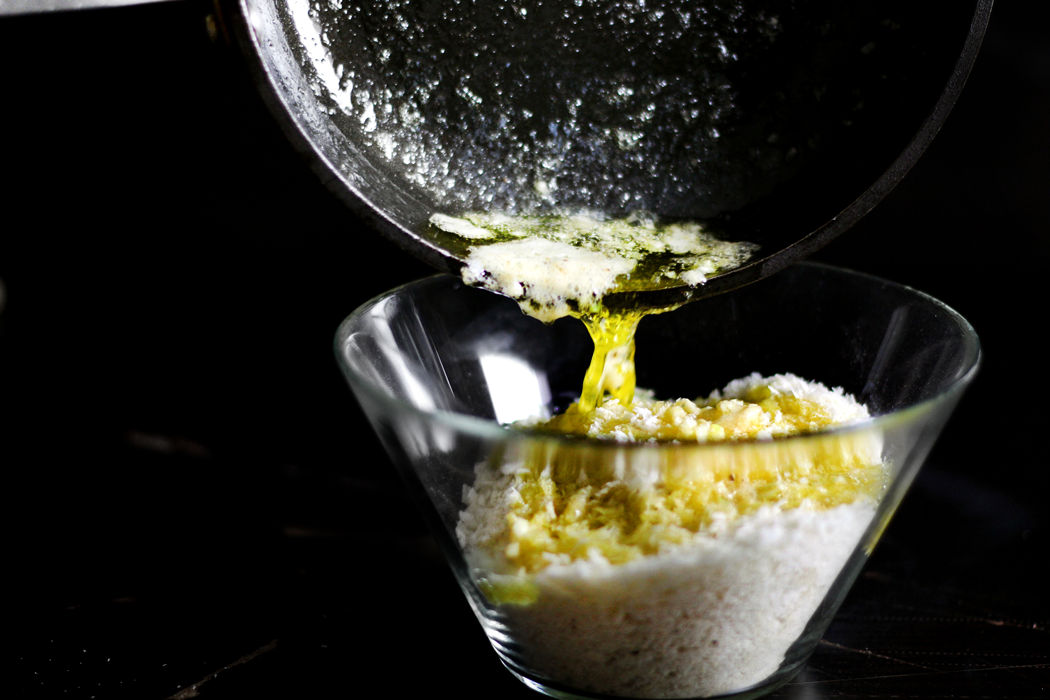 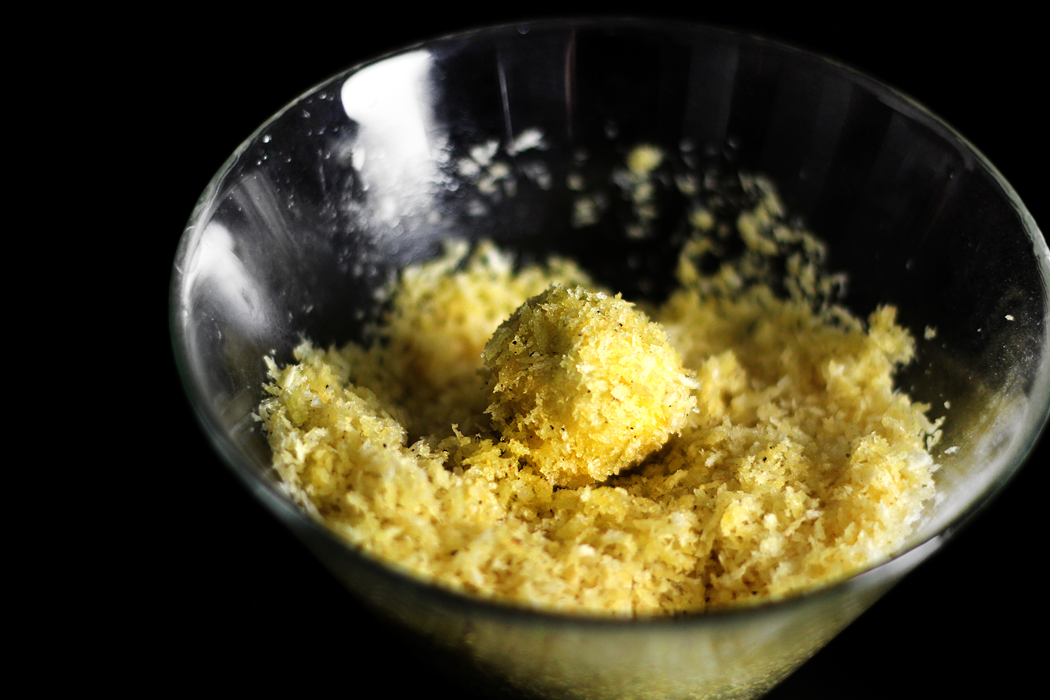 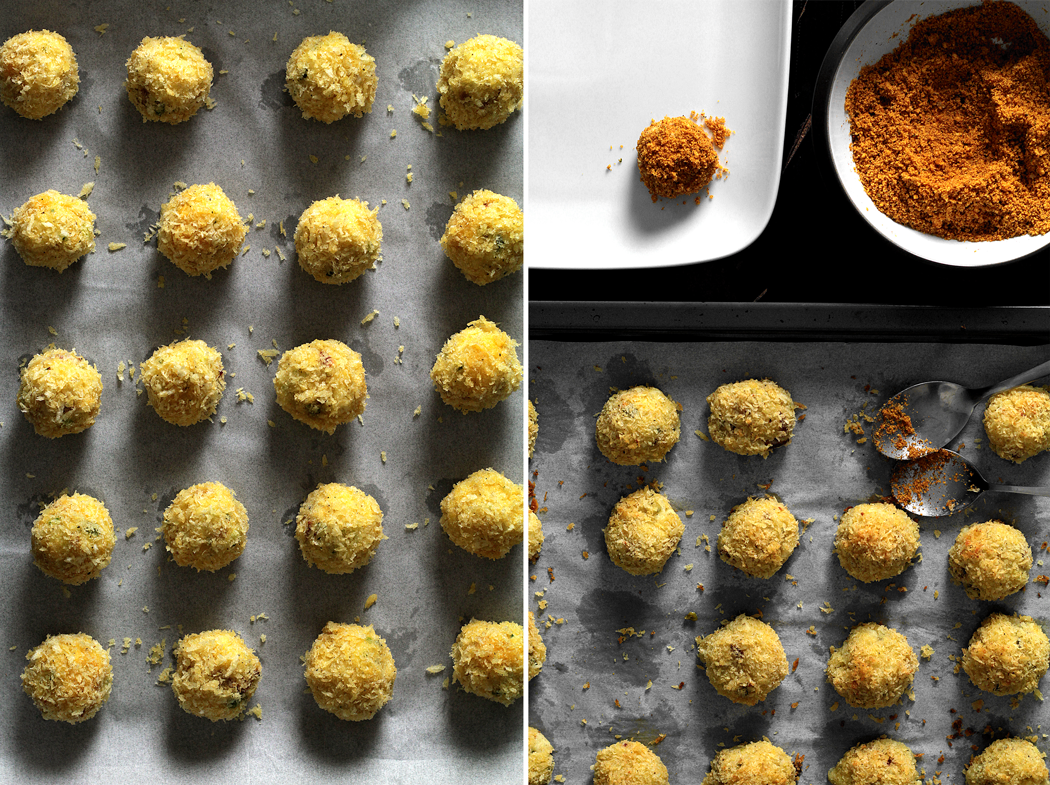 It took slightly longer, but here I had a box of finely pulverized neon-orange staring right back at my regretting face.  I imagine this is how that dude felt when he created the atomic bomb…  It’s bad.  It’s real bad.  And I had to facilitate the damage by mixing it with chili powder and lime zest, then dropping it onto some very large, laaaarge garlic-panko-crusted, bacon-sour-cream-and-chive-laden mashed potato croquettes?  I’m speaking to you now 3-pounds-heavier than yesterday and I’m still dealing with it mentally.

So let me do you a favour and retract a bit.  Pretend we didn’t hear that.  I mean really, this is about the orange cheddar powder.  The  other thing is just a subordinate delivery system that could be well replaced by say… boiled baby potatoes (helping out the less-privileged is a very charitable thing)?  Or turkey meatballs (lean turkey… who wouldn’t love leeeaan turkey)?  Oh how about savoury donuts/beignets (fried dough glistering in a flaming coat of orange I mean seriously)?  OR OR fried chicken (tumbling in cheddar dust with a few dashes of hot sauce over)?  …Wait, I’m not really helping out anyone, am I?  I don’t know!  Perhaps put it on your hair and attract lots of dudes in a bar!  Feel free to be creative. 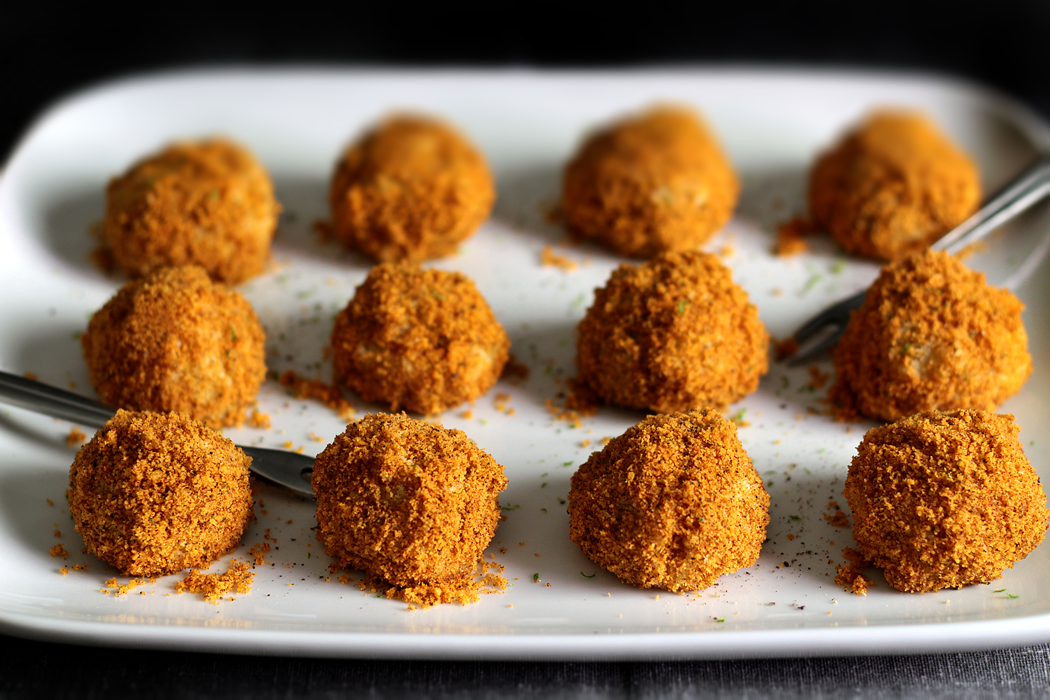 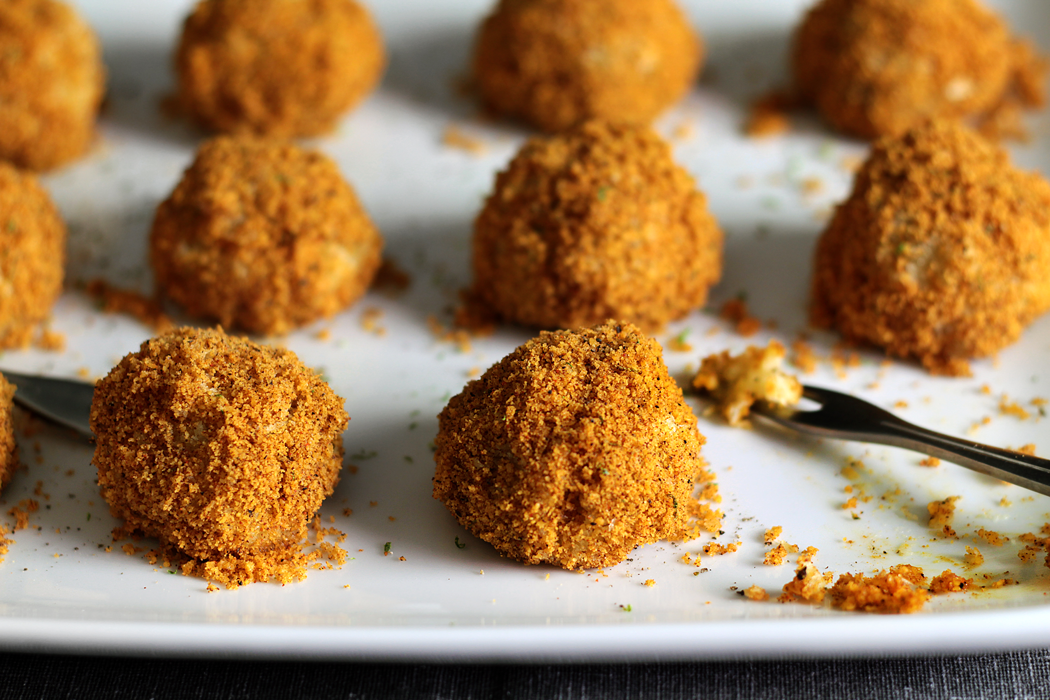 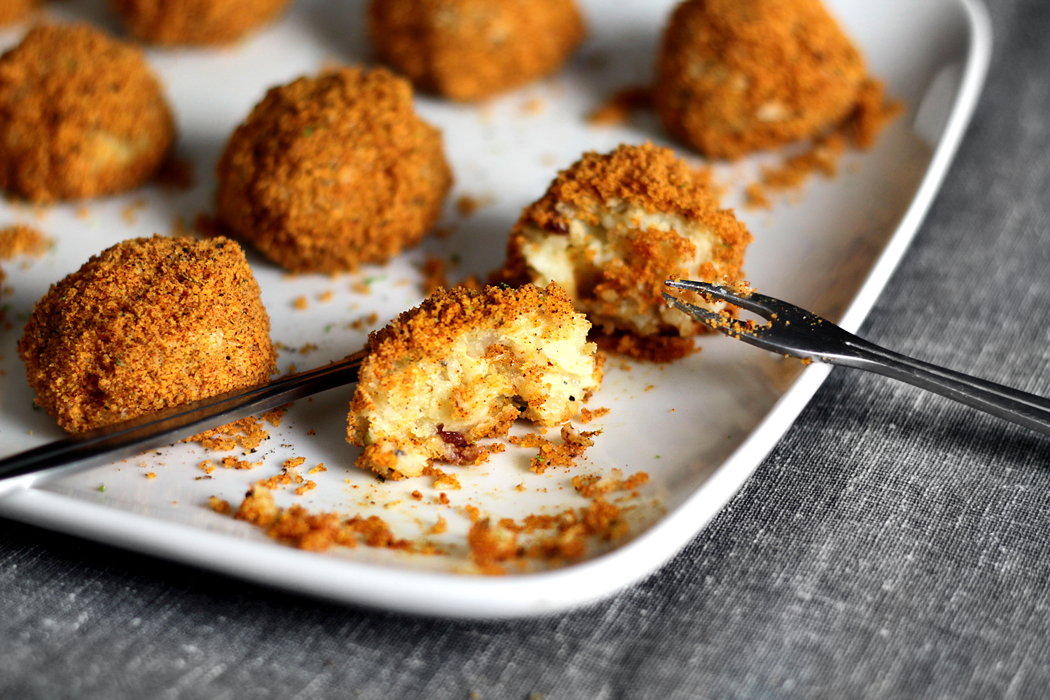 The really-orange-kind of cheddar contains more moisture than real aged cheddar that it will need around 2 days in the fridge to dry out properly.  If you aren’t fixated on the “orange-ness”, and instead want to use a real aged cheddar (or other type of cheese like gouda), it may only take 1 day.

The potatoes in the pictures were double the amount in the recipe, which I halved because I later found out it was just too much (I still had almost 1/2 of the mashed potatoes left after making all these large balls).  Now, I don’t know if you have a favourite way of cooking potatoes for mashing but nowadays, I get really lazy and I do it in the microwave.  But if you want to take the time to bake it in the oven, I have no objection to that.  And if you are a fryer type of person, you can of course fry these croquettes instead of baking which will give you a more even, and crispier coating of course.  But since these are going to be covered in cheese-powder anyways, I’m not gonna fuss over a golden-browned crust and instead, gave myself a break by baking.

To make the orange cheddar spice powder:  Grate the orange cheddar as finely as you can then scatter it as an even layer over a parchment-lined baking sheet.  Leave it uncovered in the fridge for 2 days, fluffing it once in a while, until it feels like the texture of semi-dried breadcrumbs or really aged Parmigiano cheese.  Right out of the fridge when it’s still cold, pulse it in small batches in a spice-grinder for as many times as you need, until ground to a powder-consistency (you should have a scant 1 cup/80 grams, that’s how much moisture it has lost).  Keep in an air-tight container until needed.

Before use, mix the cheddar-powder evenly with hot paprika, Mexican chili powder, ground black pepper, salt and lime zest.  Set aside in the fridge.

While the potatoes are in the microwave, render diced bacon in a skillet over medium heat until crispy.  Drain the bacon and set aside, and keep the bacon fat inside a large bowl.  Add the cooked potatoes into the bowl with the bacon fat, plus diced scallions (or chives), sour cream, unsalted butter, salt and ground black pepper.  Mash the mixture with a masher until smooth (I don’t mind some small chunks of potatoes throughout).  Add the crispy bacon back into the mashed potato and mix evenly.  Set aside (can be made hours ahead).

To bake and assemble the potato croquettes:  Preheat the oven on 430ºF/220ºC.

Mix evenly the panko breadcrumbs, garlic powder and salt inside a large bowl.  In a skillet over medium-high heat, melt the butter with the olive oil until hot, then add the minced garlic and cook until just fragrant but not browned.  Pour the garlic-oil over the breadcrumbs and mix until evenly coated.  Whisk 1 large egg with 1 tsp of tabasco sauce, and set aside.  Shape the mashed potatoes into large balls about 1 tbsp each (like I did), or smaller balls about 1/2 tbsp each (smaller balls may retain their shape better during baking).  Coat the balls in the egg/tabasco-mixture, then roll them in the garlic-breadcrumbs.  Use your hands to press the breadcrumbs onto the balls so they stick nicely together, then set them over a parchment-lined baking-sheet.

Bake the croquettes in the oven for 15 ~ 20 min until lightly browned (large potato balls may start to loose its shape during baking because of all the butter and sour cream, not sorry).  Remove from the oven and let the balls cool on the sheet for 10 min (if the balls lost their shape slightly, just gently adjust with 2 spoons).  Roll the croquettes inside the cheddar spice powder until very well coated.  Spoon excess cheddar spice powder over and serve immediately. 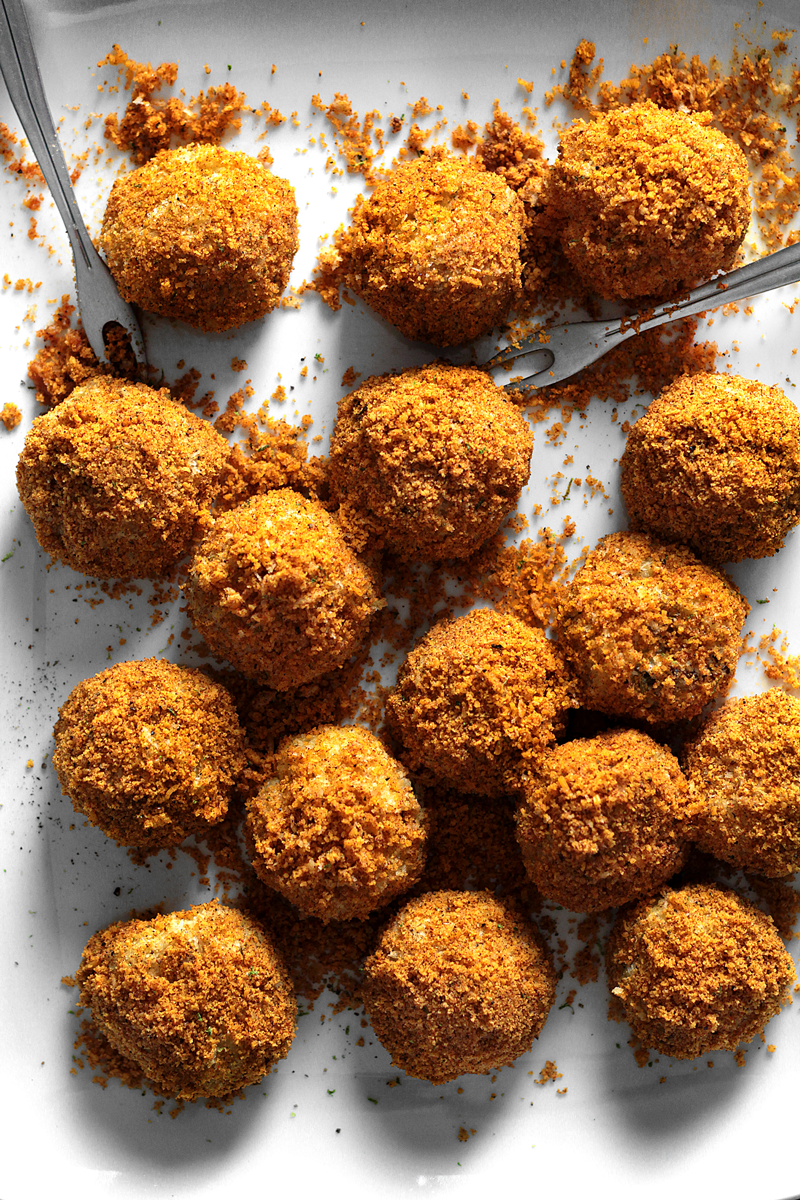