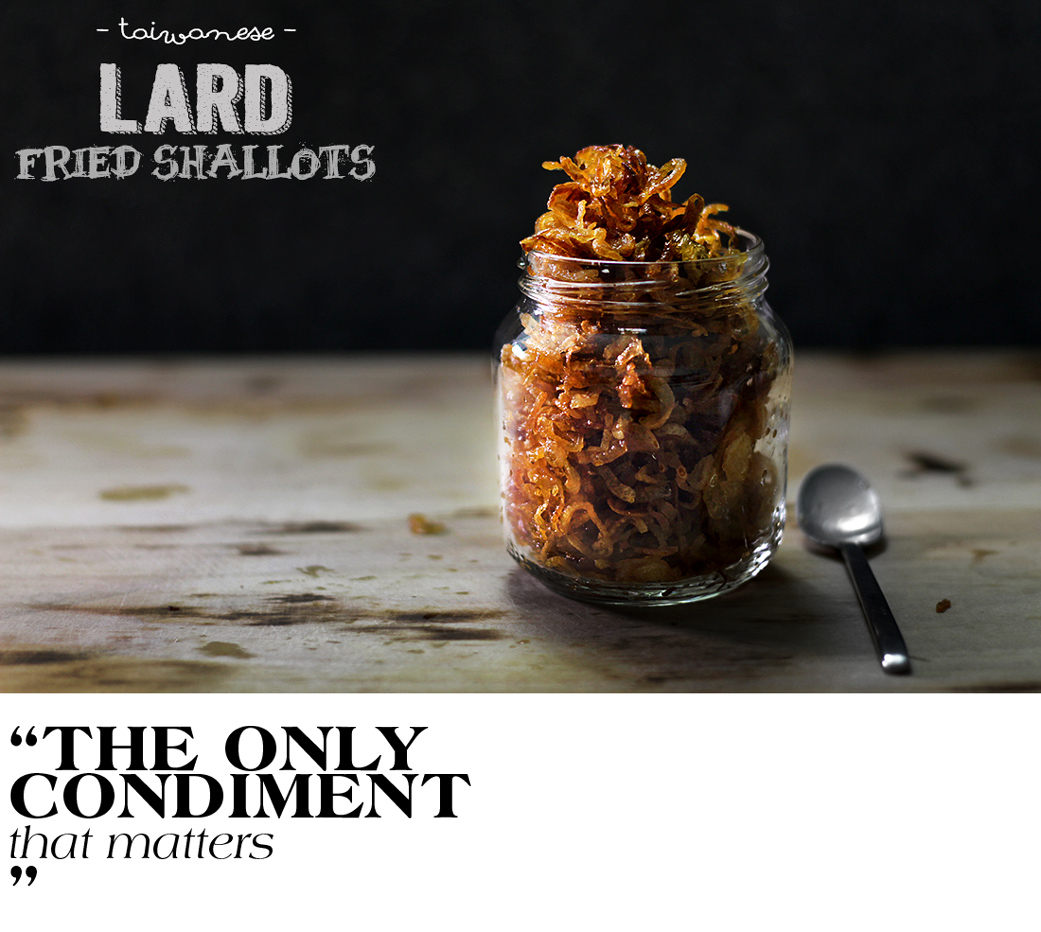 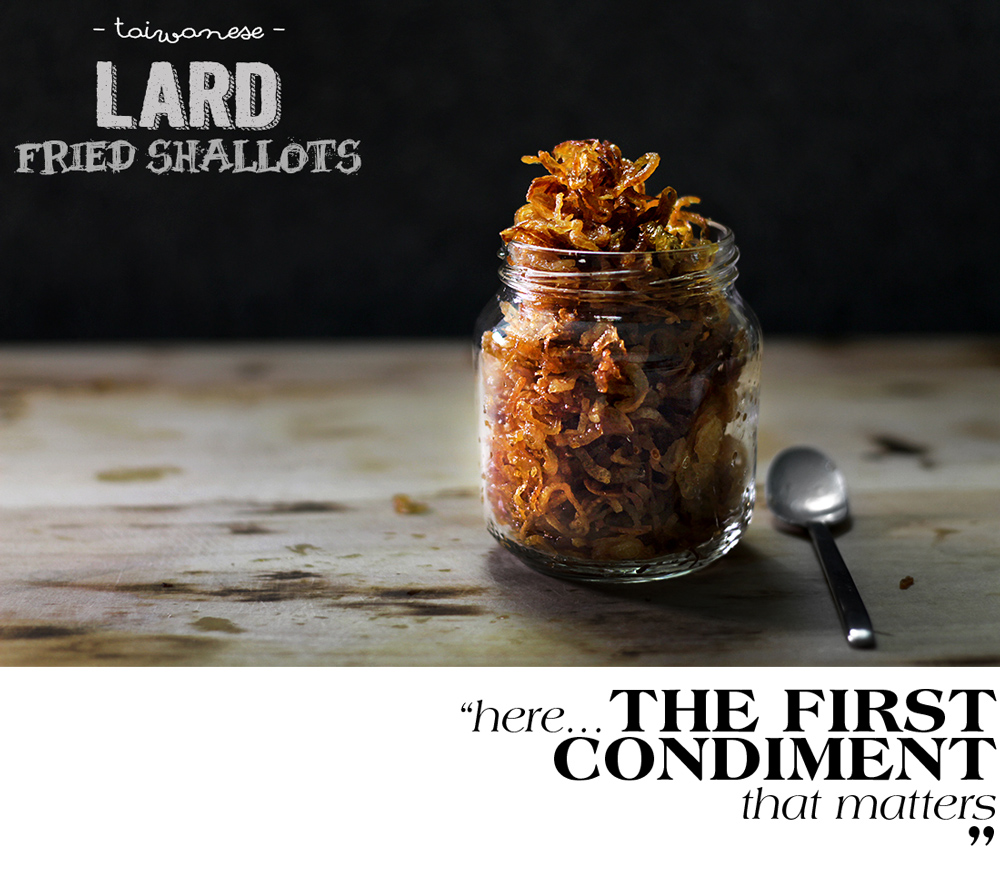 Perhaps you have heard of this.  Perhaps amidst that journey you’ve always wanted to take, physically or culinarily, you’ve left a little trail of footprints through this Southeast island distancing itself from China, sensed the disturbance in its waking yearnings to voice out.  Chances are you weren’t charmed by its political ambiguity or perhaps even curious but that’s all right, because that’s not what we truthfully know of either.  What we know of is this, our last fair stance on independent nationality, what even brought you to take an impression on our not-much-ness, the last pride.  This, Taiwanese street foods. 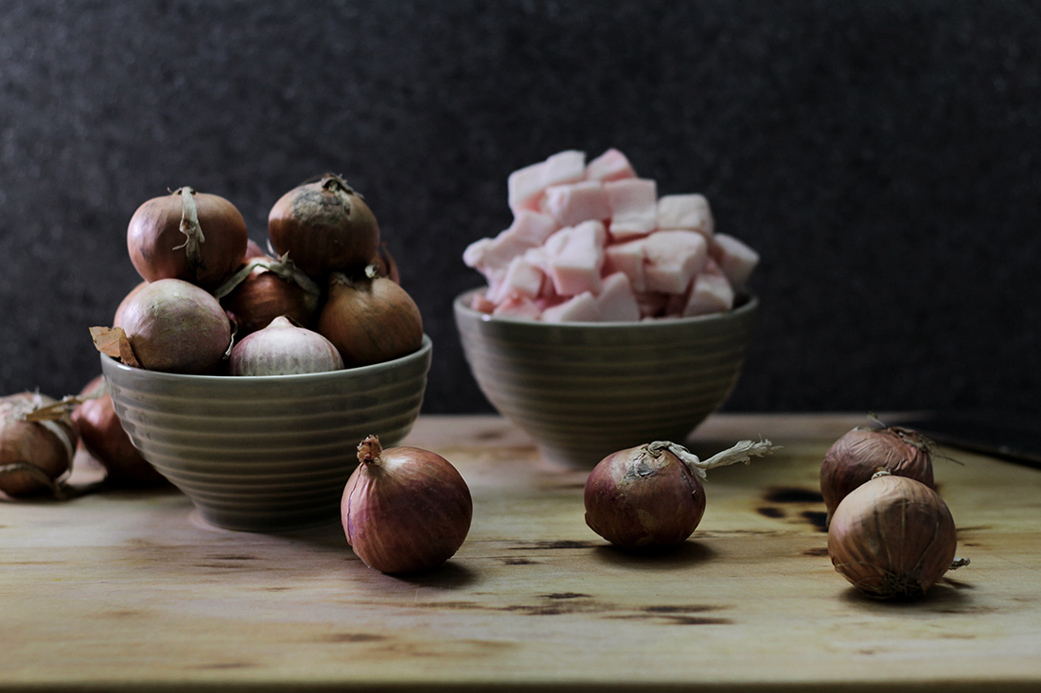 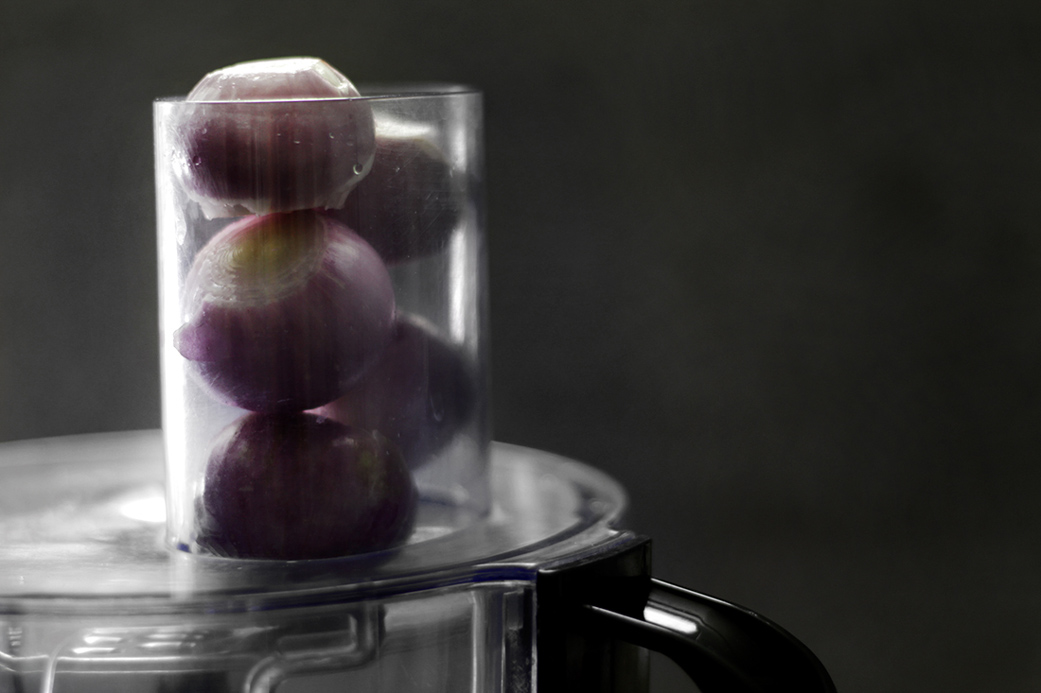 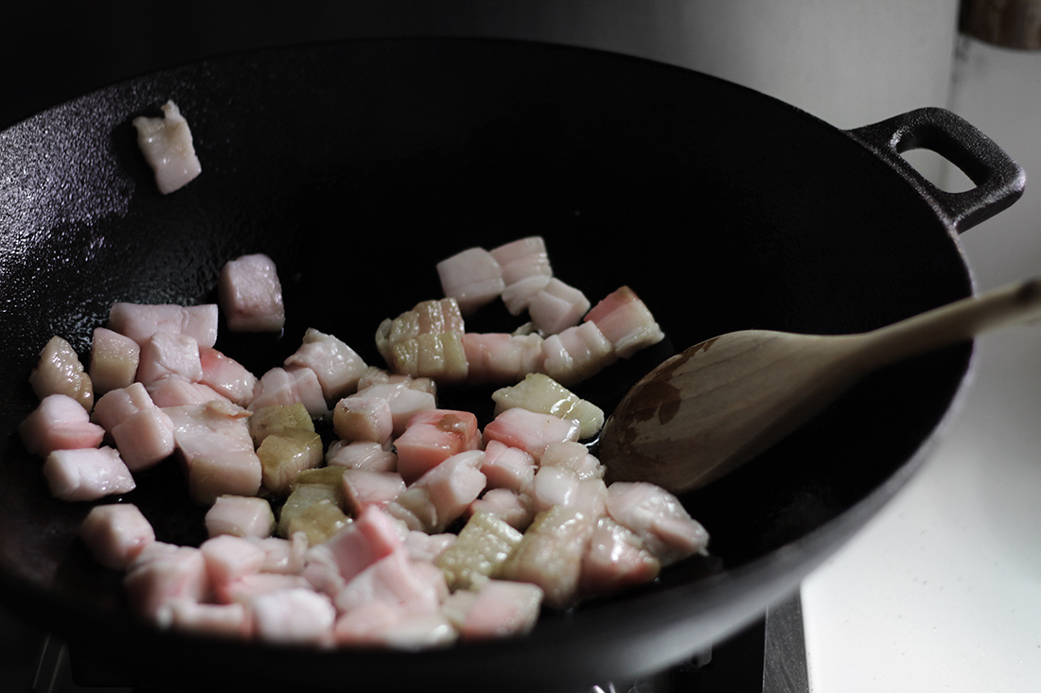 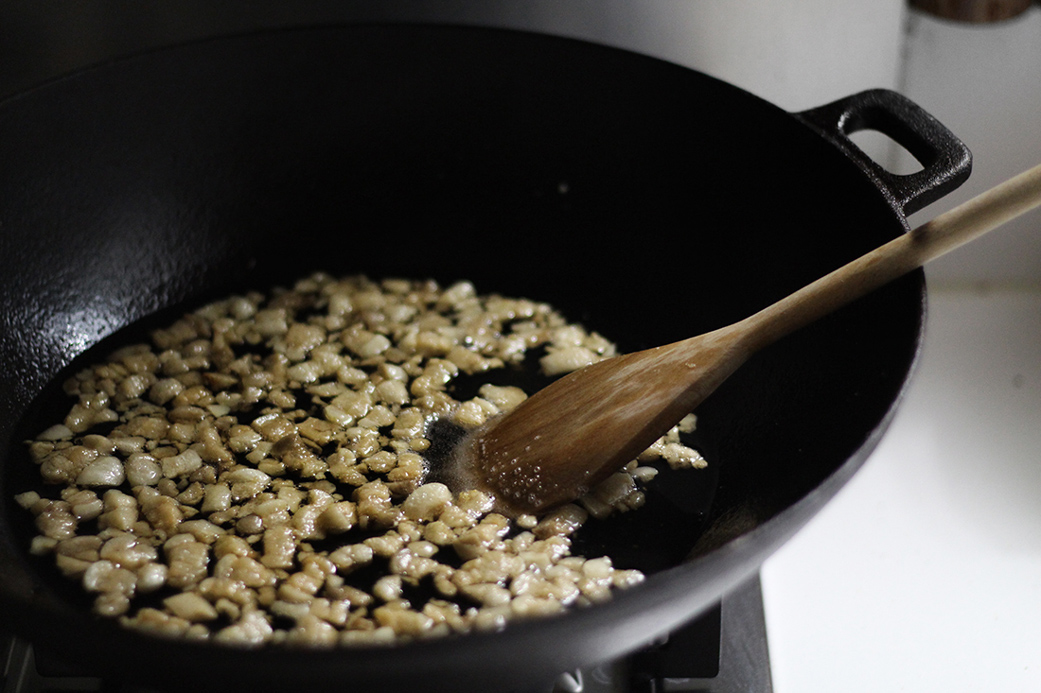 You may be a small number, much smaller than the majority-others who sought fashion in more posh things like kimchi or banh mi, but that’s all right, too.  The word cult sounds rather fitting to any springing culinary movement that just found itself inheriting a semi-spokesman like Eddie Huang.  In fact, pffff… that word is too cool for me.  I’m just here to fry some shallots.  If you want to take an interest here, this is where you’d start, the first condiment that matters.  Really.  It’s the substance every home-sick traveller smuggles in their socks, the base where we build lotta things upon, the key.  The conversation about Taiwanese street foods cannot be held without the voice of fried shallots.  It just can’t.  Fried shallots is more or less incorporated in well over 50% of Taiwanese street foods, and that’s a mouthful.  You would logically assume that a thing of this importance, like kimchi to Koreans, is ritually practiced at every household, held strictly to their own rules of making.  Well.  No.  Nobody.  Makes fried shallots at home in Taiwan. 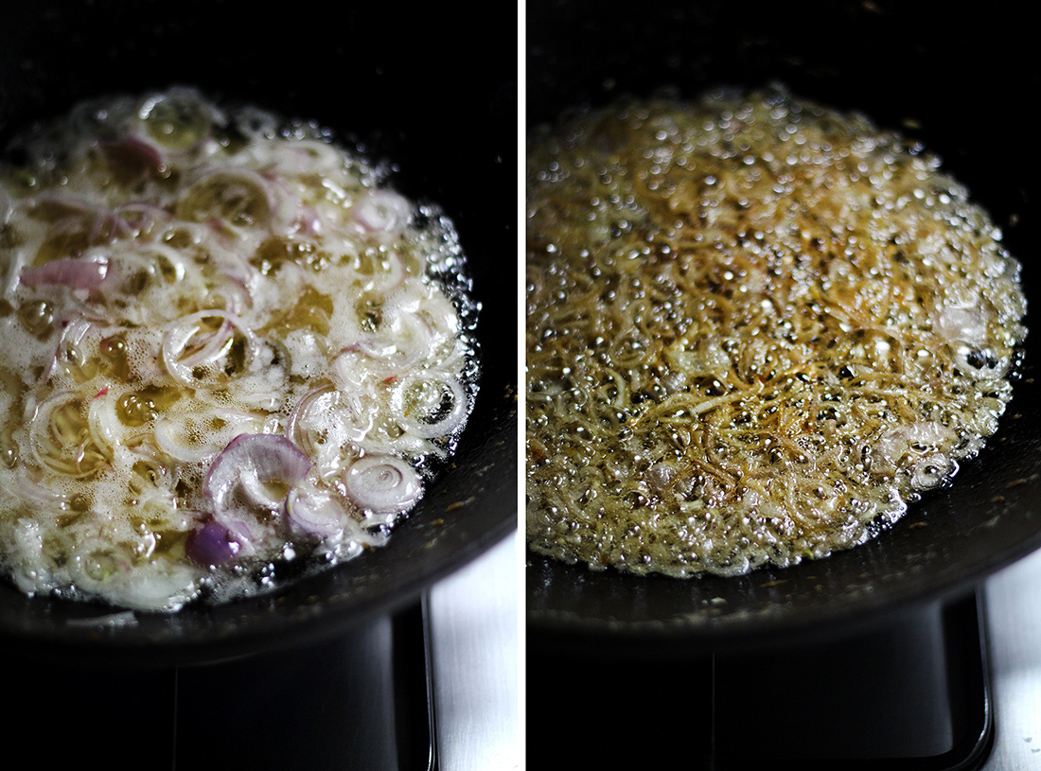 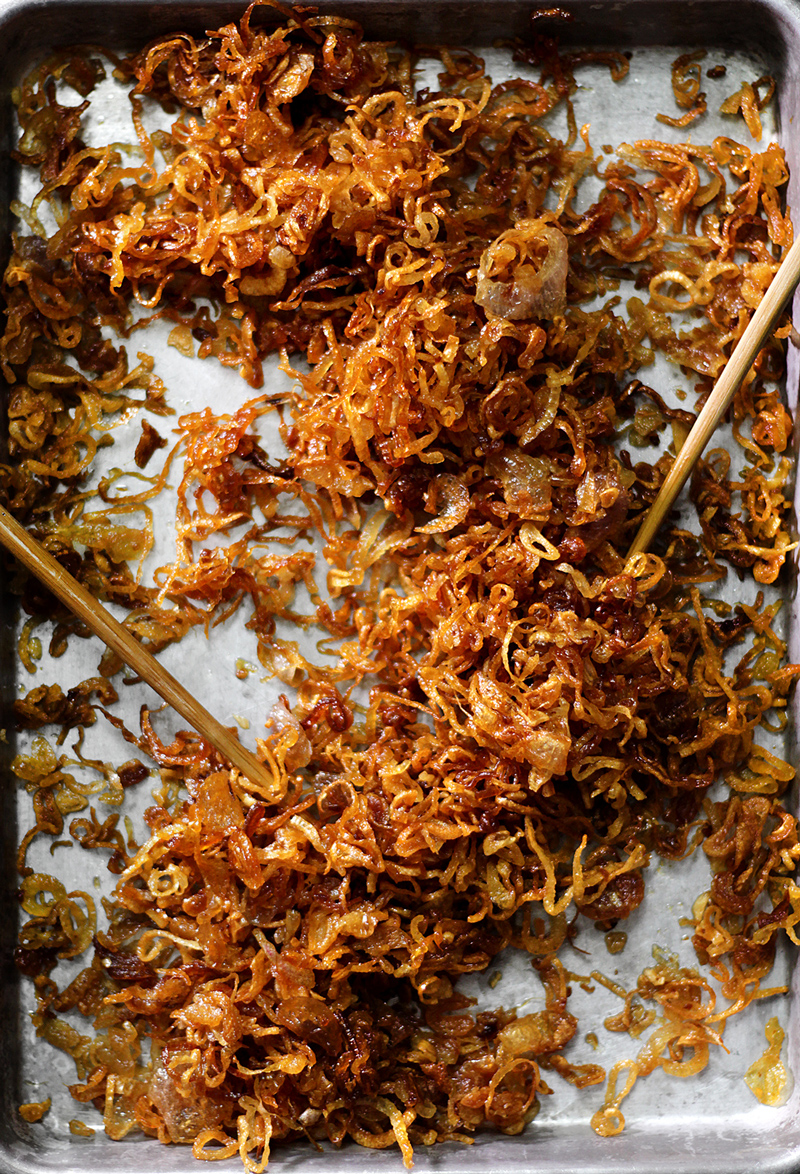 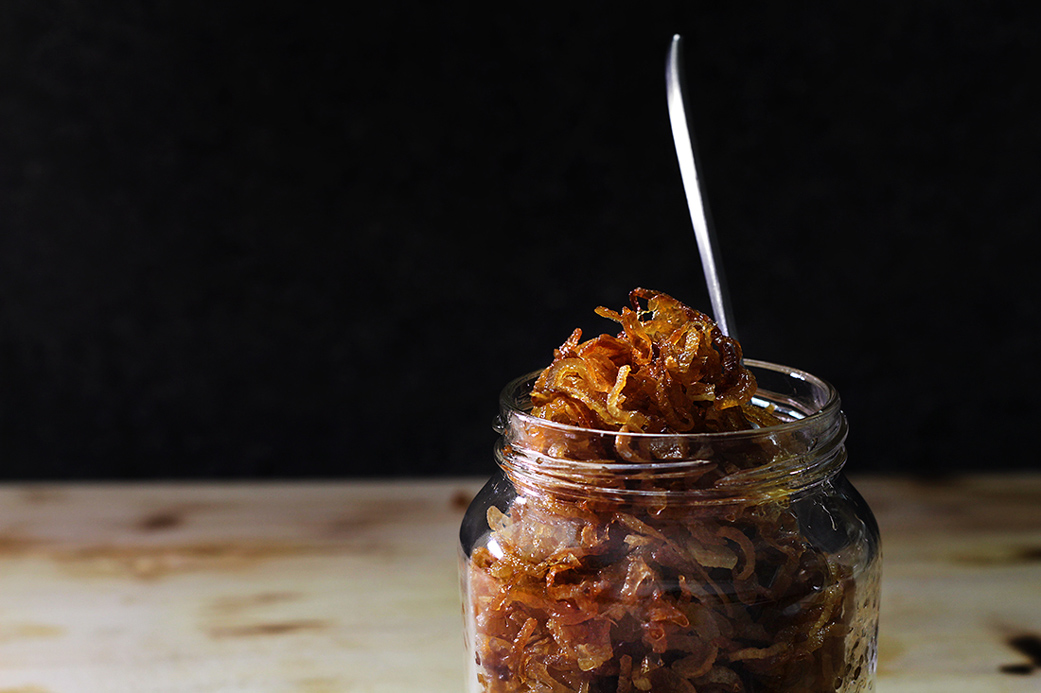 Why would they?  It’s readily purchasable nearly at every market, and often of unsurpassable quality, too.  Then why would I?  Well, unfortunately the “unsurpassable” remark stops at a screeching halt once outside the border of Taiwan.  You see, freshness.  Freshness is what kills its punch, aroma… muchness during however long since the day it was pack, shipped and shelved at the shady corner of an Asian supermarket if you can find one.  By the time it lands in your kitchen at its sorry state, it adds about as much flavour to your dish as cardboard shreds.  To be properly sold, it needs to be vacuum-packed and kept frozen but let’s not assume exporters are foodies.  So, now the question is why should you?  Oh boy… you should… if not for holding onto a jar of magical strength that adds incredible flavours to all here-on dishes, if not for a pot of the godmother of Taiwanese good eats, hell even if not for your unending pursuit of everything delicious… 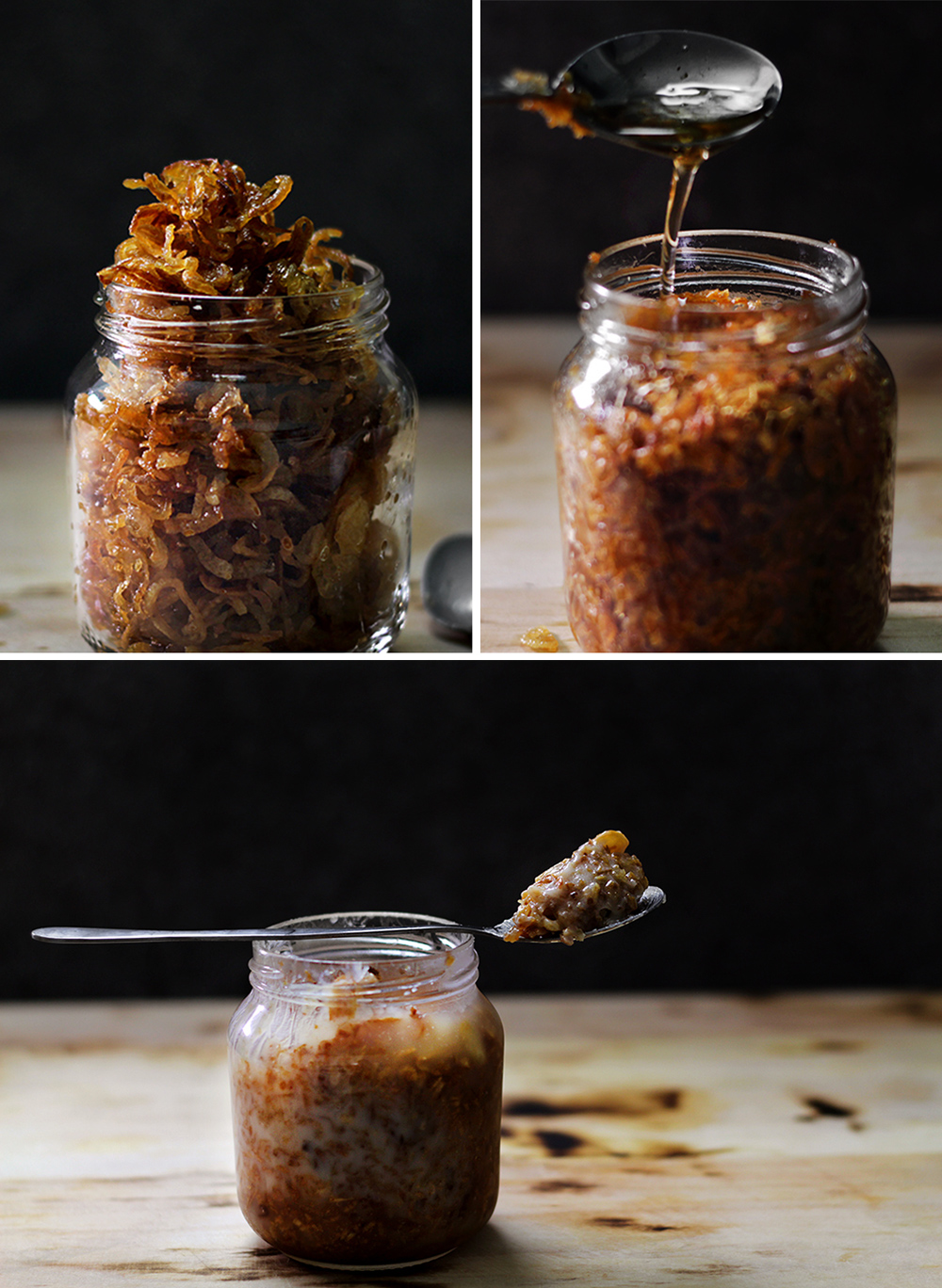 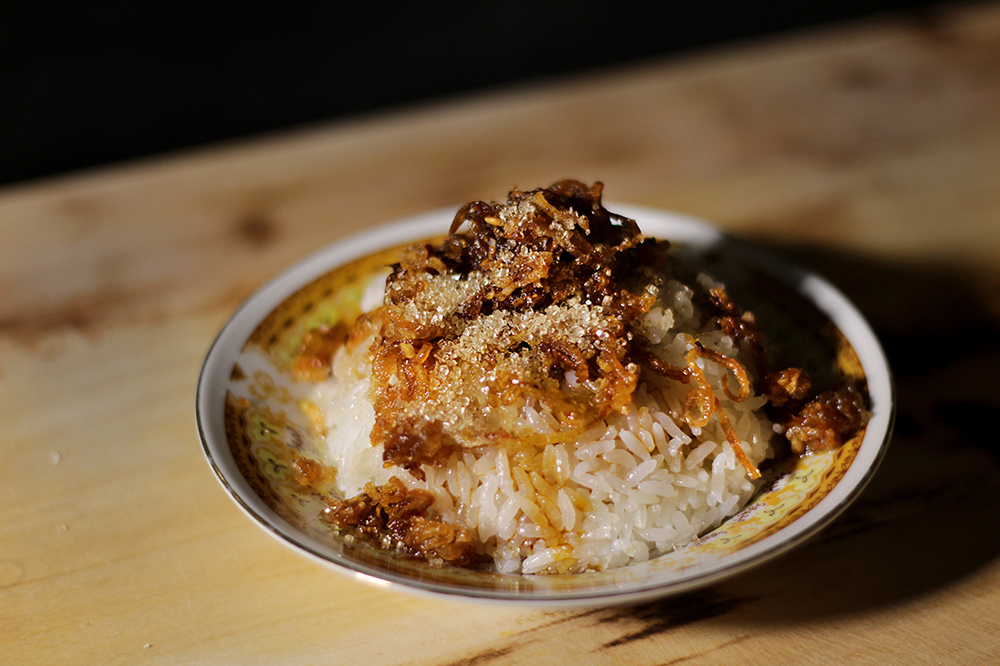 …You should because of something sickening, a bowl of hot steamed rice with lard-fried shallots seeping down to the deep… salty and dark from the soy sauce then a crazy hefty pinch of crunchy sugar on top.   You think I’m insane.  Go ahead, doubt.  Then come join the club. 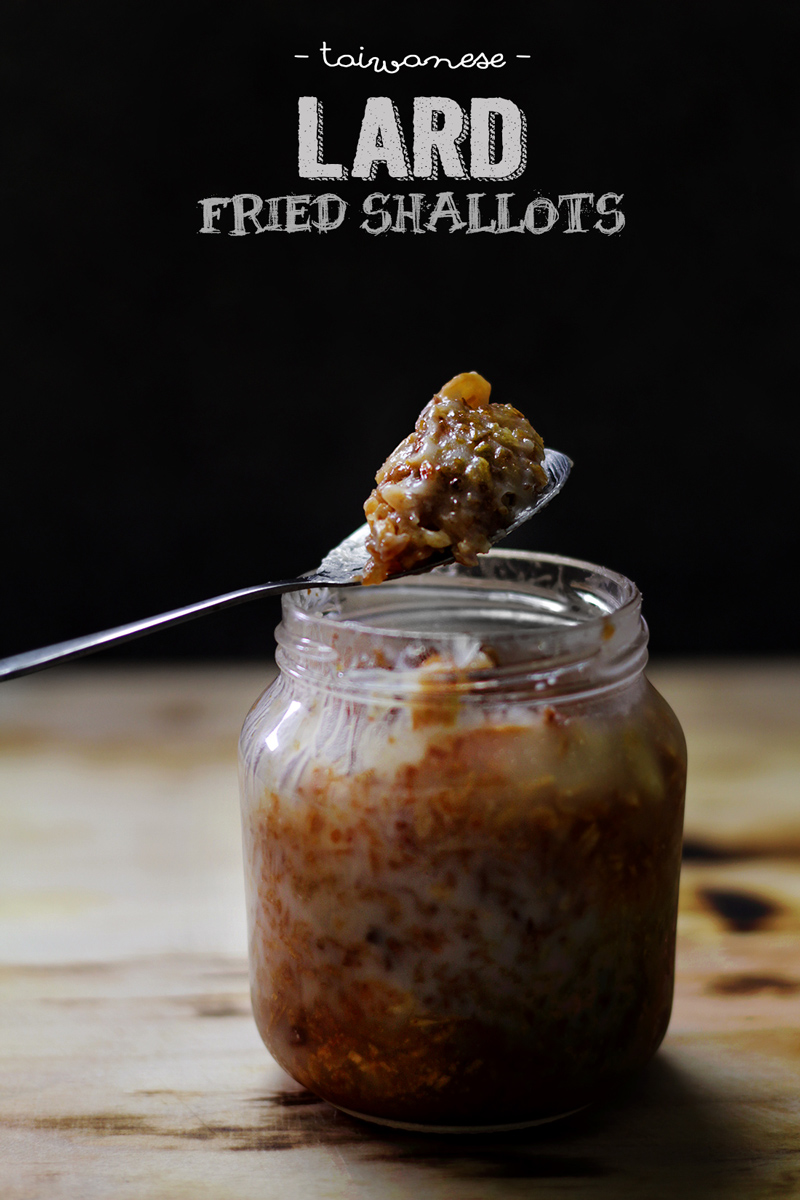 Lard is the choice of fat traditionally used in fried shallots, but any number of animal fat say, duck fat/goose fat/chicken fat (schmaltz) can be of prefect substitutes.  As long as you can manage to collect the equivalent amount of duck/goose/chicken skins or fat lumps to render.

The type of shallots MATTERS.  The Taiwanese variety is much slender and less sugary in content, producing a more aromatic and again, less sweet fried shallots.  Unfortunately I wasn’t able to find this particular variety and used the more commonly found shallots that are rounder in shape.  I suspect that you may run into the same conclusion but that’s ok.  The product is, very closely, the next best thing.

Render the fat:  Heat up a deep heavy-bottomed pot (I used a cast-iron wok) on medium heat.  Add the diced fatback (the smaller the dices the faster they render) and turn the heat down to medium-low.  Let the lard be slowly rendered out of the fatback, as the dices will start shrinking significantly until you get about 3 1/2 cups of rendered lard, approx 10 ~ 15 min).  Turn OFF the heat and remove ALL the fatback dices (which should be very tiny and crispy by now) with a slotted spoon.  Let the lard cool down to almost room-temperature.

If you are using already rendered lard, simply just warm it inside the pot until it liquifies.

Fry the shallots:  Clean and peel the shallots.  Using a food-processor or by hands, slice the shallots into pieces of equal sizes.  This will help the shallots cook/brown evenly.  By a number of small batches (2 cups at a time), add the shallots to the room-temp lard with a pinch of salt (1/3 tsp).  Turn the heat on medium-low and turn it down to low when the shallots start to sizzle slightly.  NOW, this is as much about DEHYDRATING the shallots as browning it.  If the fat gets too hot, the shallots will brown before they dehydrate completely, which will result in soggy and stale fried shallots.  NO NO NO.  Fried shallots needs to be CRISPY!  A low and slow process is important.  Stir the shallots every couple of min.  Initially the shallots wouldn’t take on any color, but just get softer and shrinks slowly in size, not until the very end they start to turn darker in color once they’ve lost most of their moisture.  Each batch will take approximately 15 ~ 20 min to dehydrate and brown.

JUST when they take on a light golden-brown color, TURN OFF THE HEAT, and remove the shallots with a slotted spoon (spider strainer works great) and spread them out on a sheet-pan.  Do this rather QUICKLY because they will turn from golden-browned to BURNT, faster than you think.  The fried shallots may not appear to be completely crispy at this point but don’t worry, they will crisp-up once they air-dry a little bit.  Make sure you remove every bits and small pieces from the fat so they don’t get burnt and mixed into the next batch.  Add the next batch to the fat, and turn the heat back on low again.  Repeat the steps.

To store:  The fried shallots should now be stored in two forms.  One that stays dry, another submerged in lard.  The dry fried shallots are used in staple-dishes like rou-zao (slow-braised minced pork belly), or mixed into soups, rice dishes and whatnots.  The other one submerged in lard is a “paste” if you will, to be melted into dry/soup noodles to add its unmistakable flavour.

Divide the fried shallots in half.  Scoop the dry fried shallots into a freezer-proof zip-lock bag.  Force out as much air as you can and zip it tightly.  Store in the freezer for up to 1 year.

Move the rest of the fried shallots into a jar.  Crush them with a spoon or fork so they break down into even smaller pieces (the less empty space there is between the fried shallots, the less lard you’ll need to fill it).  Spoon the lard used to fry the shallots into the jar, until it JUST fills the top of the shallots.  Close the lid and keep in the fridge for up to 4 months, or in the freezer for up to 1 year. 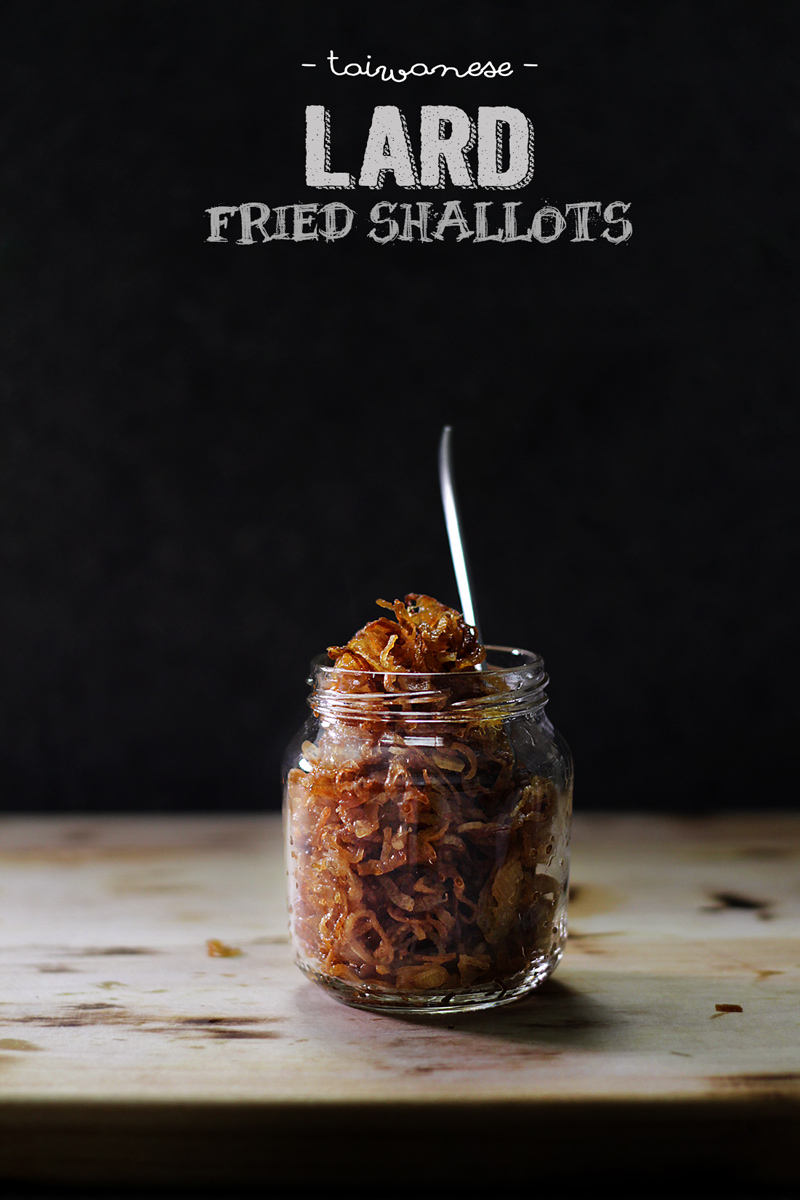