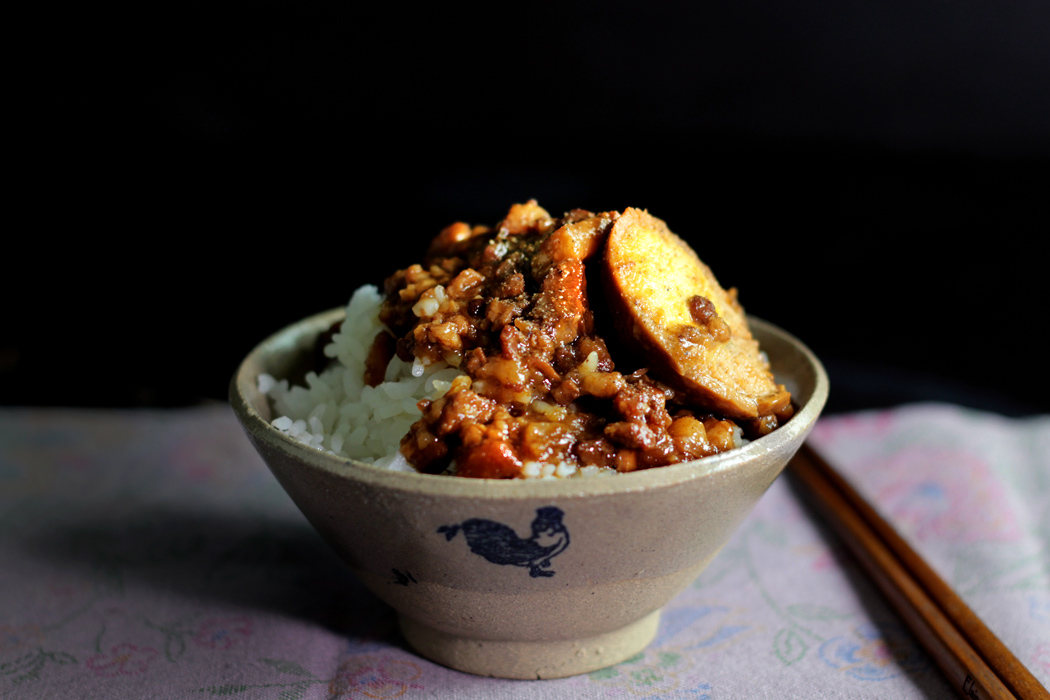 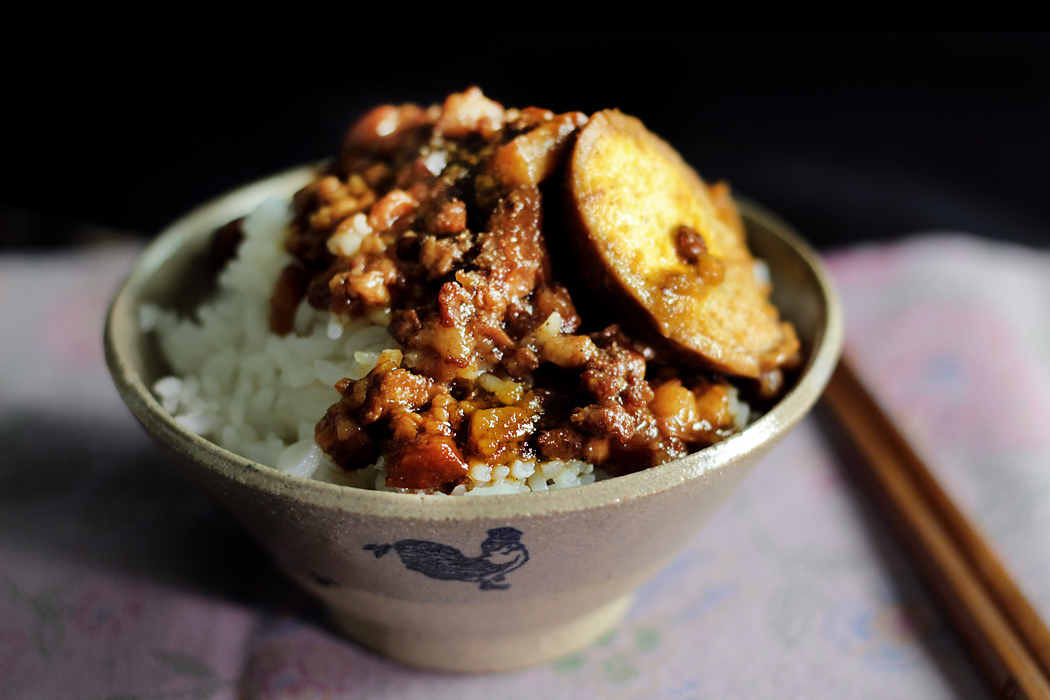 “YOU MISSED OUT…
THAT JUST ISN’T FAIR”

I wrote a post called Taiwan in a pot very early on when this blog just started, when most of us haven’t actually met yet.  And perhaps that’s OK.  Perhaps it’s wiser to have pre-mature photographs stay buried six-feet-under the surface of blogosphere, safely and quietly, just like how I forever silenced all images of my existence before 1998…  But I couldn’t help but feeling that if my pettiness to hide my food-pictures wearing braises, has caused you to miss out on something great, truly great, then that just isn’t fair.  So the other night when I made this for the gazillion-th of time at home, I thought I’d give you a little shout-out.

Ladies and gents, my death-meal. 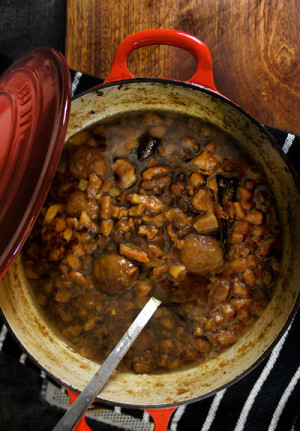 This is typically called lu-rou-fan, meaning lu-rou (braised pork) on rice (fan).  It’s a generic and sometimes misleading name, because to be more accurate, it is also/should be called rou-zao-fan, meaning rou-zao (braised pork belly with fried shallots) on rice (fan).  Rou-zao is a very specific, and uniquely Taiwanese thing.  No matter how many adaptations or heirloom secrets are out there in every food-stall’s special recipes, it is always, always, diced pork belly braised in soy sauce and you-cong (fried shallots).  The application of rou-zao is vast (as briefly described in the original post) but most-beloved-ly, is served on steamed rice.

I can’t sell you on making this if you two were never related.  If you were not from, or have never been to Taiwan where this had left an impression on you, chances of you raising the slightest interest to having it on your stove is scarce.  But if you were, in any way, bound to this dish by blood or memory, you should be balling with joy right now.  It’s just that kind of thing.

The recipe/steps are mostly the same as previously published, except for 1 added ingredient (molasses), couple of notes/tweaks and online-sources for you-cong/Taiwanese fried shallots.  Also, I have since published a post on how to make fried shallots at home, for those who are ambitious.  So consider this a round-up for everything to be in one place.

So now, should I take you there?  Let’s go to Taiwan.

Before we start, a note on soy sauce:  try to use Taiwanese brands just for the sake of keeping the margin of error down to the lowest.  Base on my experience, the price of soy sauce does reflect on the quality, and although I can’t find an online-source for the specific brand I’m using, this one and this one looks promising.

Most Taiwanese stew-type dishes are done over the stove-top because ovens aren’t typical in a traditional Taiwanese kitchen.  However, I would strongly advice you to use the oven in this case (if you have one of course) because it provides even/rounded heat around the pot and significantly reduces the chance of burning on the bottom of the pot, which is a highly probable outcome for this dish if you don’t keep stirring.  But if you have to cook this on the stove-top, just remember that you’ll need to keep an eye on it throughout.

If you’re not having your butcher dicing the pork belly for you, you should freeze the meat until hard but workable, before cutting.  Trying to dice skin-on pork belly at room-temperature would be a nightmare.

Sometimes if I get pork that aren’t the freshest designer-pork (like the pig just lost its life this morning at a farm called Organic Hogs), or that it was purchased from a less-than-perfectly-hygienic environment (like a traditional wet market), then I like to blanch the diced pork belly before cooking.  If you have high confidence in the quality of pork you’re beholding, omit this step.  To blanch:  bring a large pot of water with a few pieces of ginger and scallions to a boil, add the diced pork belly and blanch for 2 min.  Drain and rinse under cold water until clean of all scums.  Drain well and set aside.

Heat up a Dutch oven over medium-high heat, then add the diced pork belly (blanched or fresh), sliced shallots, chopped garlic and raw/cane sugar.  Turn the heat down to medium and cook until the pork starts to render out its fat, and that the sugar starts to caramelize/brown on the bottom of the pot or on the surface of the pork belly, approx 8~10 min.  Add 1/2 cup of soy sauce, the rice wine, cinnamon stick, molasses, ground white pepper and five spice powder.  Keep cooking and stirring until there’s good caramelization/browning on the sides and bottom of the pot, and that the liquid has almost evaporated.  Add the you-cong/Taiwanese fried shallots and stir to combine, then without further frying (you-cong can easily burn), add 3 cups of water and bring to a simmer.

A lot of pork fat will float to the surface, skim off 1/2 of it and reserve (This dish should have a good amount of fat in it, but leaving too much in the pot will make it difficult to judge the water-level when the sauce is reducing.  Reserving the fat allows you to adjust later.)  At this point, you’ll want to adjust the seasoning with more soy sauce.  Different brands of soy sauce has different saltiness, but chances are you’ll need 1/8~1/4 cup more.  Poke a few holes in the hard-boiled eggs with a fork to allow flavours to penetrate, then add them into the pot.  After the liquid has come back to a simmer, put the lid on and move into the oven (or if you are cooking over stove-stop, lower the heat down to low and stir once every 20 min).  Cook for 2:30 to 3 hours until the pork belly is meltingly soft, and that the liquid has reduced slightly but become gelatinous.  If by any chance, the liquid is reducing too fast during cooking, add a bit more water.  You should have about 1/4″ of pork fat at the surface, but if there’s more, skim it off.

Spoon the rou-zao generously over hot steamed rice, with a little sprinkle of ground white pepper (I like to cook 2 parts short-grain rice with 1 part sticky rice for perfect texture).

Once it has cooled down, rou-zao can be divided into air-tight containers/bags and kept frozen until needed. 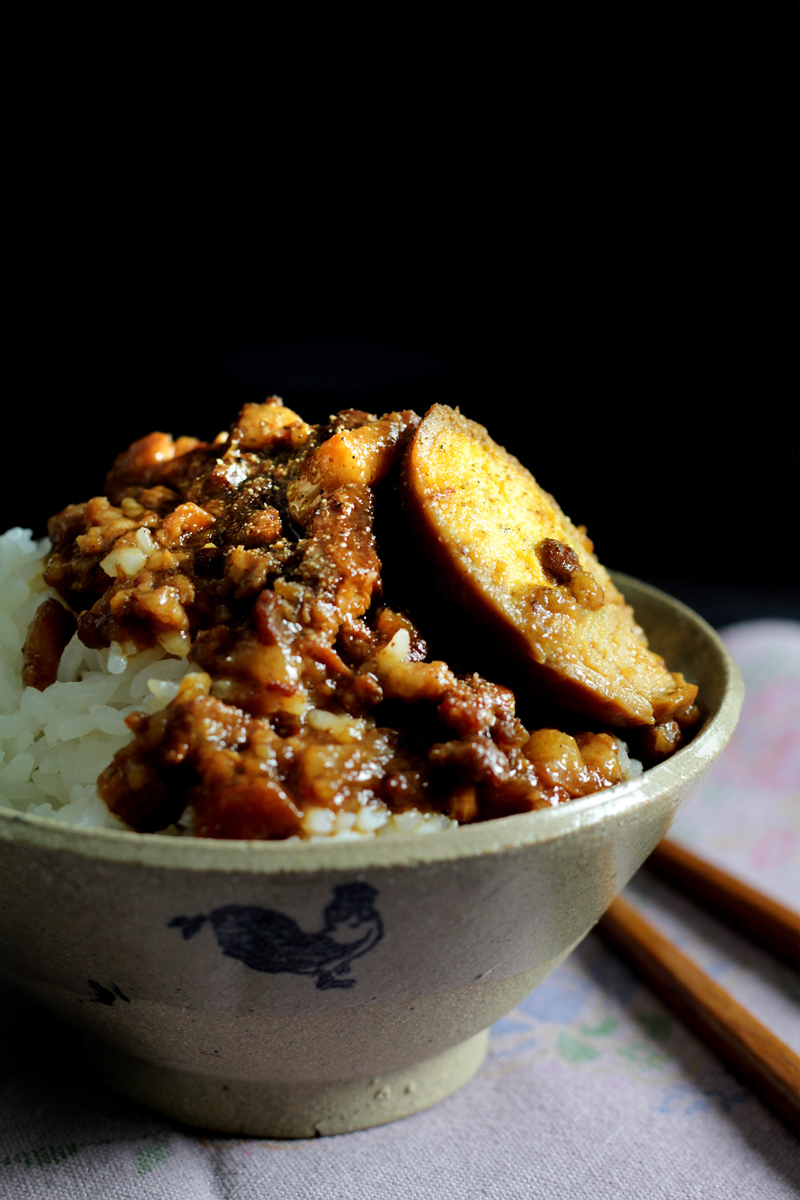 CRANBERRY VIENNESE SANDWICH CREAMS
SALMON POKE-D YOU. YOU SHOULD POKE BACK
SRIRA-CHOPPED CHEESE