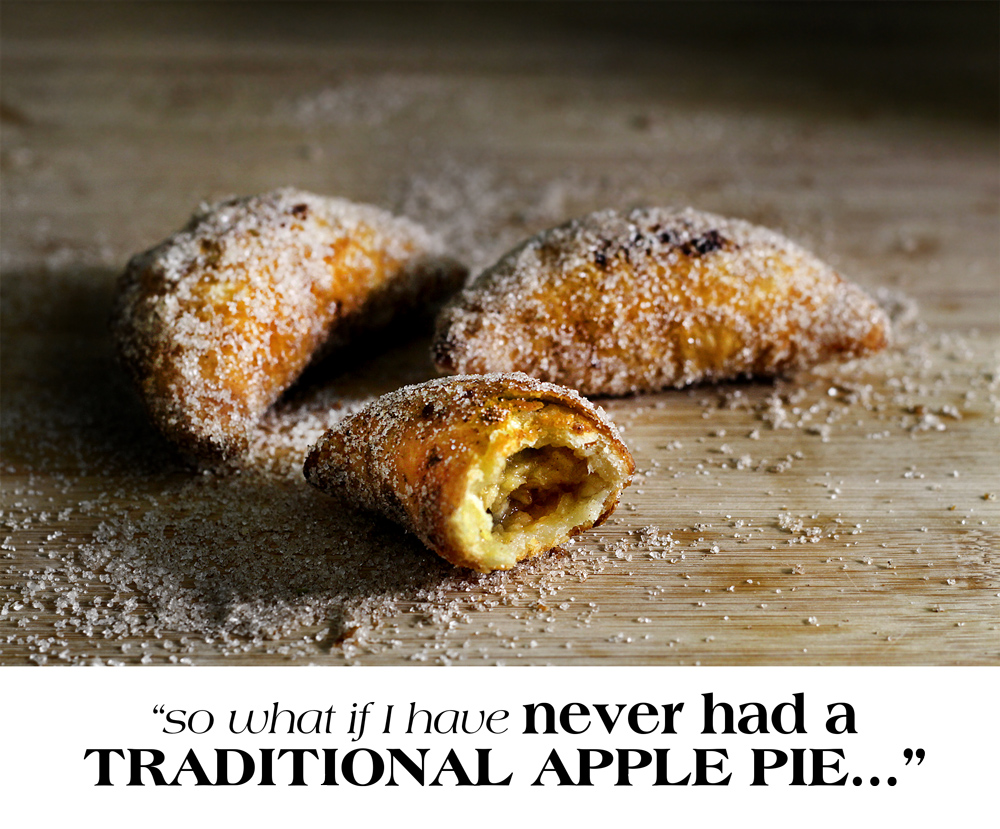 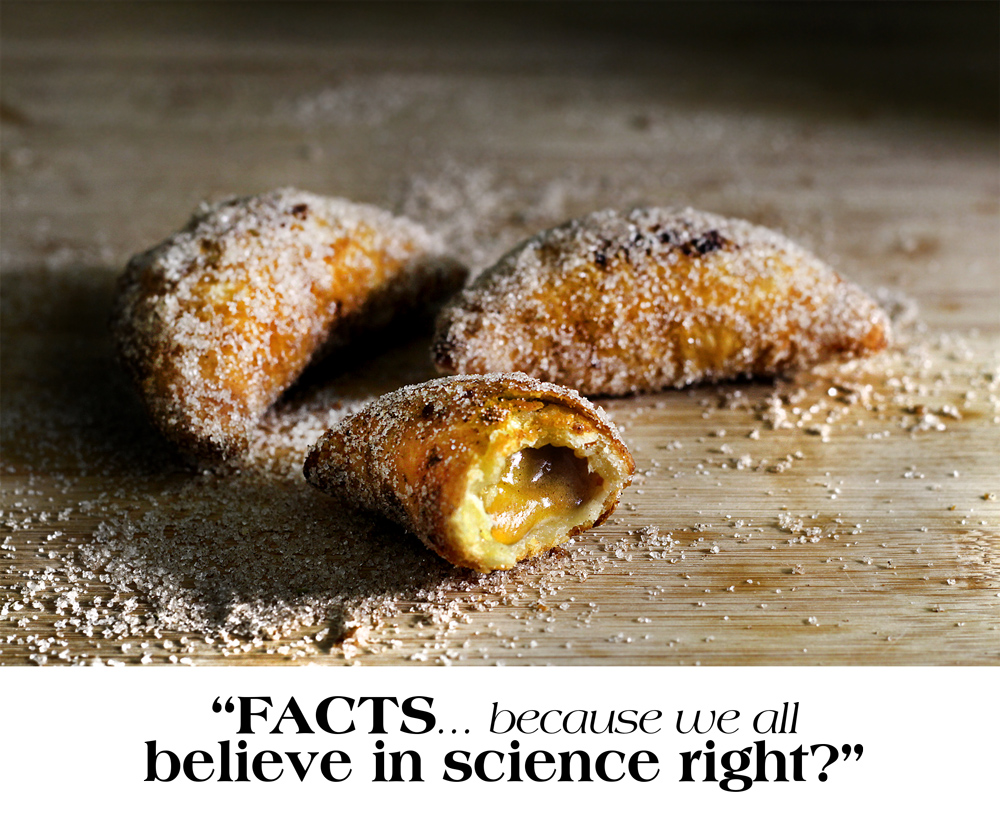 Season-transitioning flu… they just love me so.  A tender… suffocating love.  So listen here’s what I can do. With my energy level slightly above a wheezing squirrel, I’m gonna save any effort on an elaborate sales pitch with delicious stories for you to try this.  This being – fry your damn pies and do it this way.  I’m not gonna go there…  Instead, I’m just gonna give it to you straight, as in bullet point-style.  As in STONE-COLD FACTS.  Yeah.  Because we all believe in science.  Right?  So eat this because: 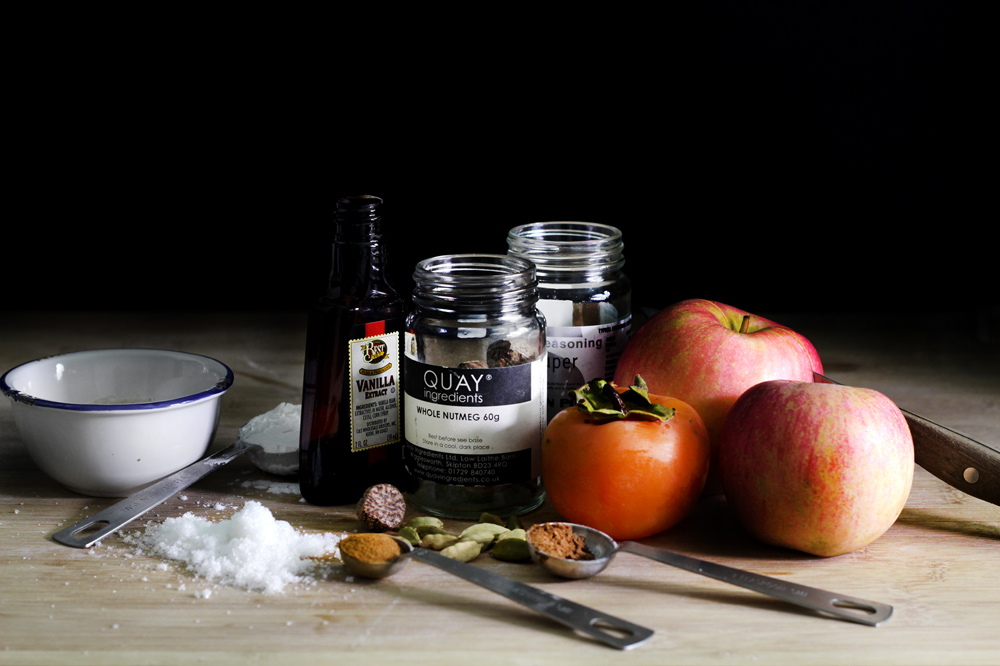 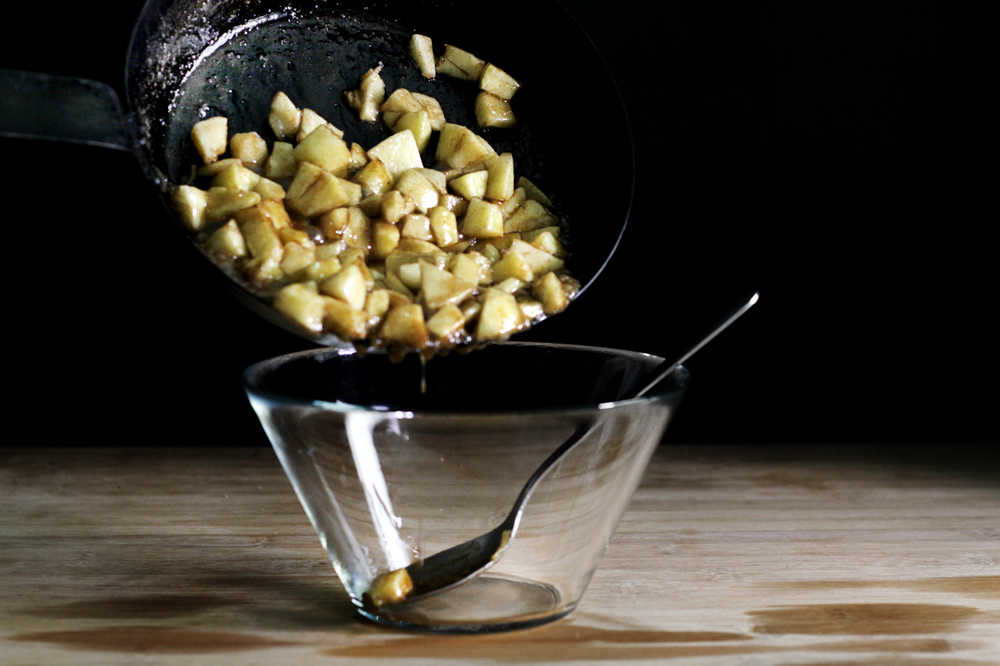 *  LOWER IN FAT THAN TRADITIONAL APPLE PIES:  Yeah, that’s right.  Believe it.  A typical pie-dough that consists of 2 1/4 cups of flour would usually need about 1 cup (2 sticks/226 grams) of unapologetic butter in order to achieve the desired flakiness.  But in order to to make this dough more pliable, and also because what’s the point of jamming all that butter in if it was just going to melt away into the pool of frying oil anyways, this pie-dough only consists 1/2 cup (1 stick/113 grams) of butter, which is HALF the amount of traditional pie-dough.

Oh WAIT, but then you ask, how about all that oil that’s going to be absorbed into the dough during frying?!!  GOOD QUESTION!  Science loves questions.  Good.  I came prepared.  The frying oil, which I measured before hand to be 1 1/2 cup and re-measured again after frying and draining and excluding every other drops that fell outside of the pot, still remained as 1 1/4 cup.  Which means, given that if your frying oil is at the right temperature and etc, no more than 1/4 cup of oil should be absorbed.  Still less than a traditional pie-dough. 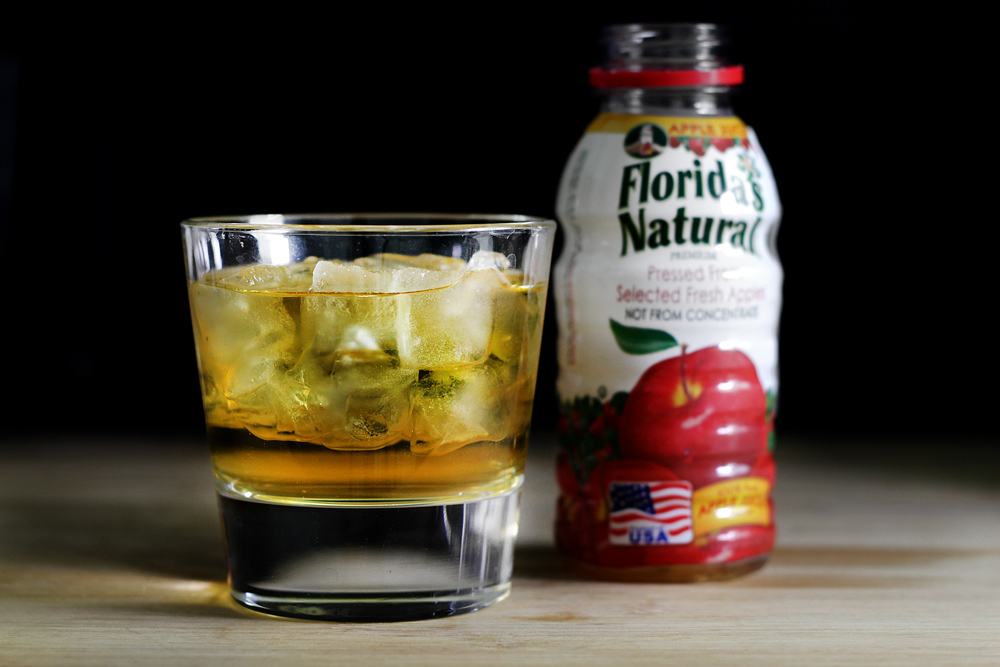 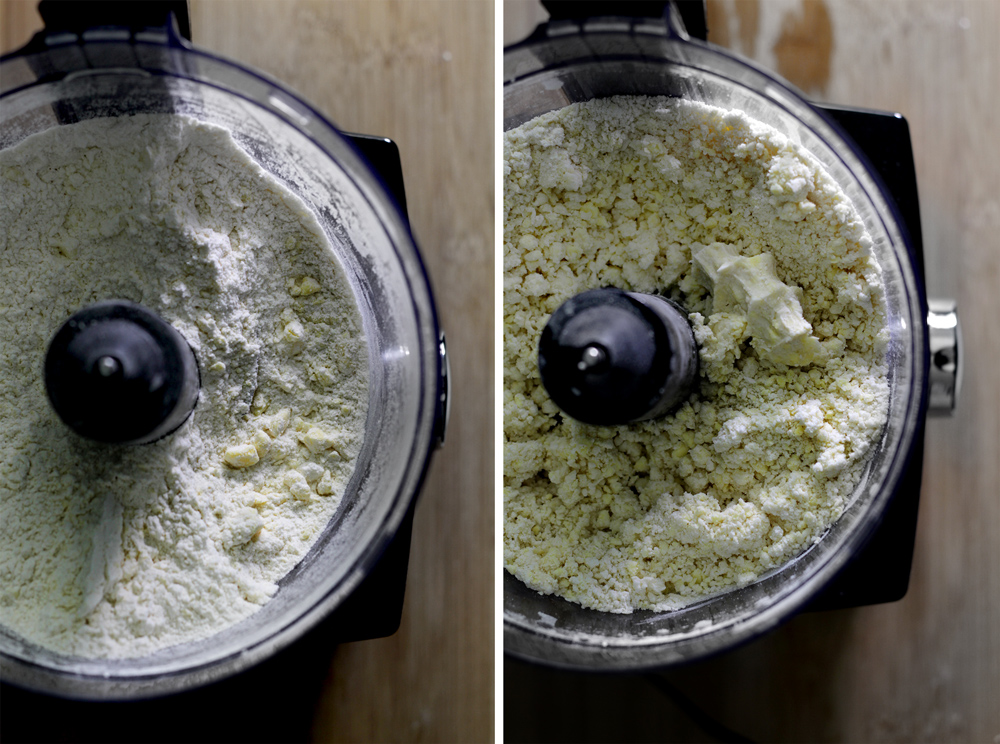 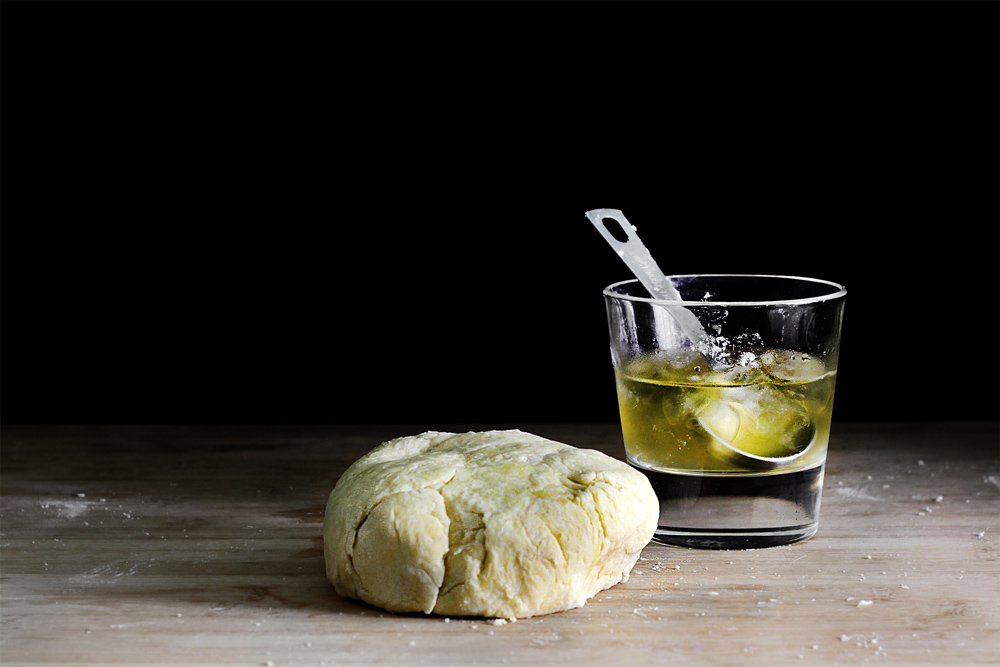 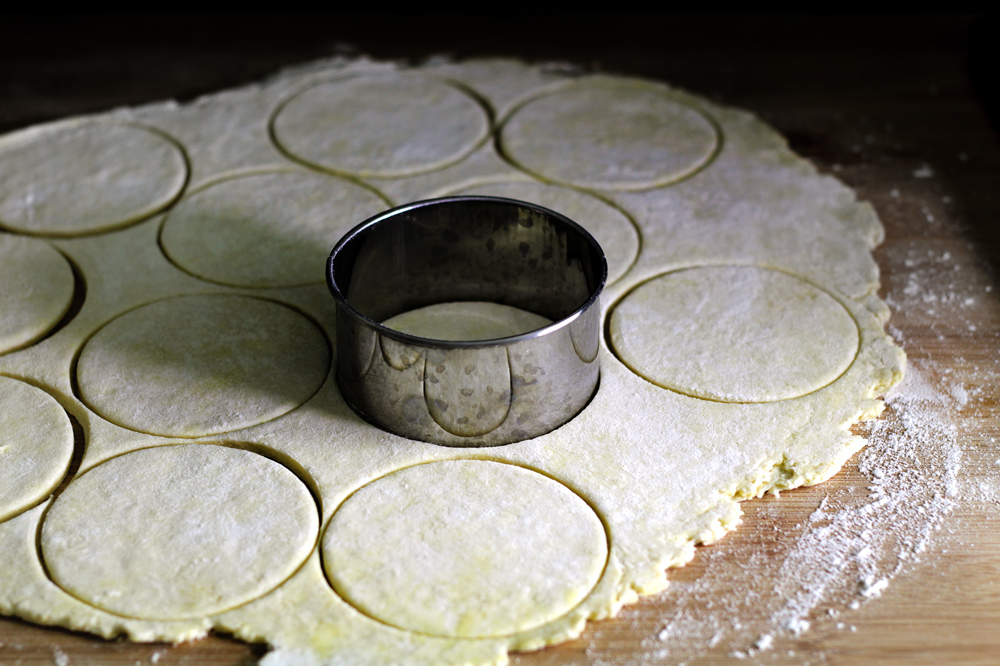 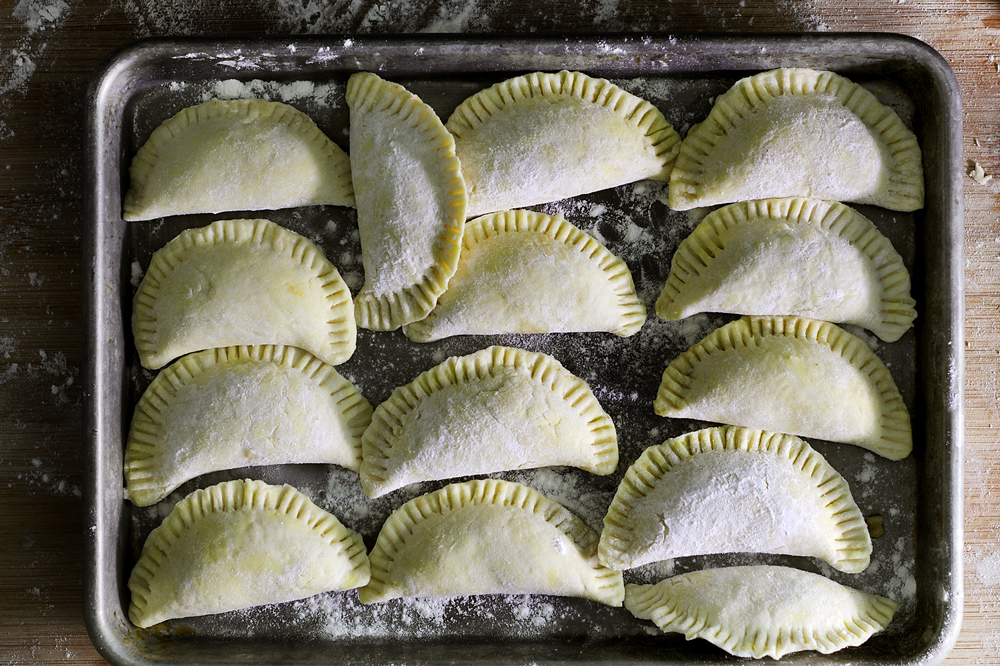 * MORE FLAVOR MOLECULES THAN TRADITIONAL APPLE PIES:  Since the flash-frying time isn’t enough to cook the filling, the filling is cooked… condensed… caramelized before going into the wrapper.  Most of the liquid that will give out during baking in a traditional apple pie, would have evaporated during this process which leaves you with a more concentrated flavor.  And for anyone who has a soft spot for an ooey-gooey-centered-everything, this is where the persimmon come in handy.  It may not give a signature boldness to the flavor-profile, but the sweet and gooey nature of its flesh is perfect for replacing what is taken out… WATER!

Water leaves the apples and persimmons join.  Together they get really happy.  Get the FACT?

Oh and I haven’t even mentioned the clever trick of replacing the water in the pie-dough with APPLE JUICE, which provides sweetness, acidity (for a softer dough) and above all, flavour. 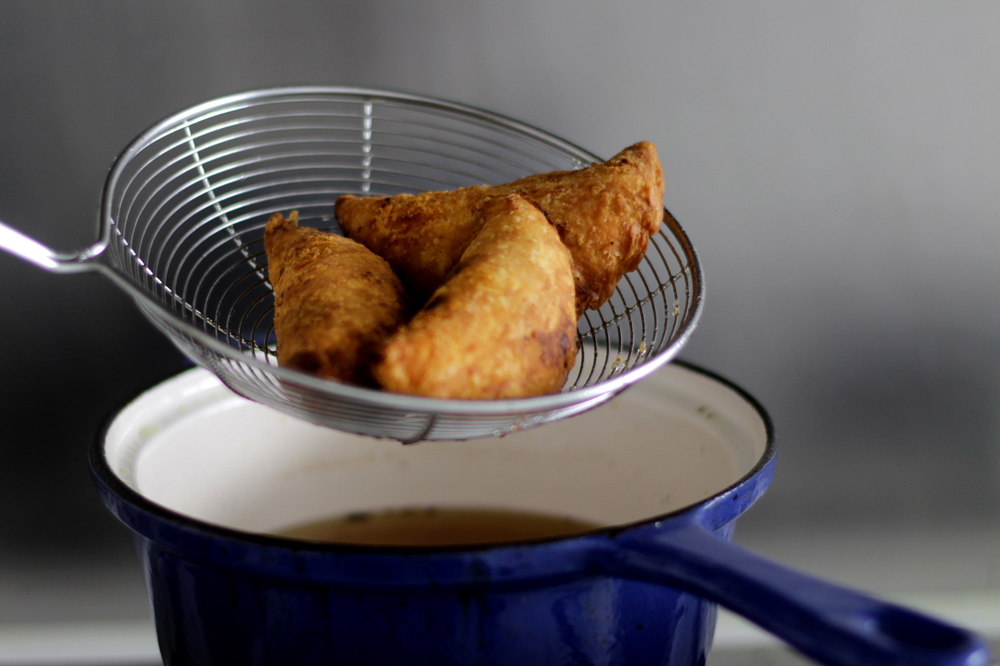 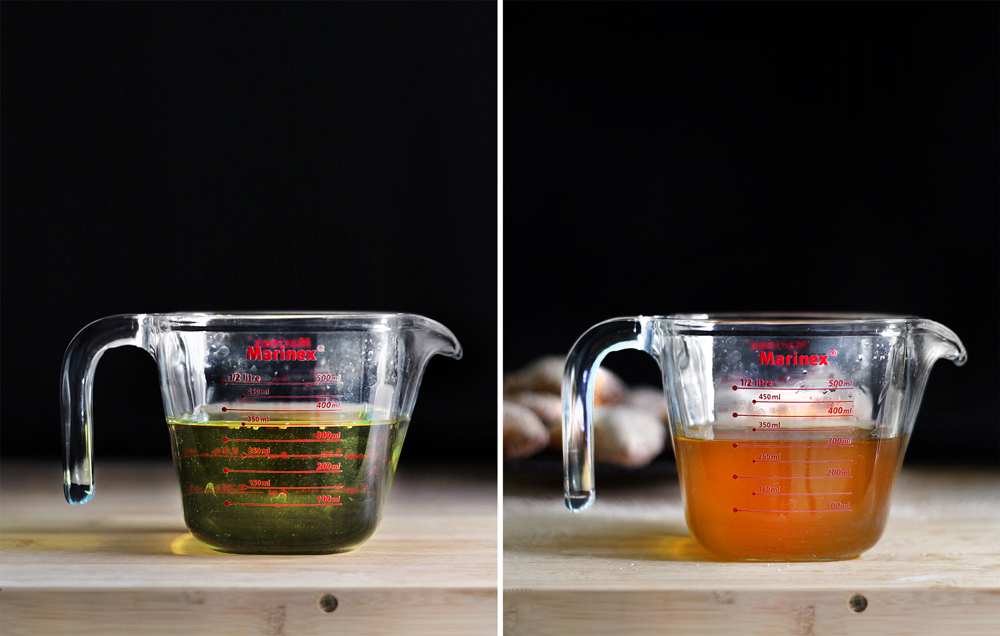 * THEY JUST JUST JUST TASTE BETTEEEER:  Do I really have to spell this one out for you?  They are deep-fried… in blistered happiness with hearts all warmed up and gooey, then hand-in-hand they take a tumbling in cinnamon and cardamon sugar to their hearts content.  I can almost hear them giggle they so happy. 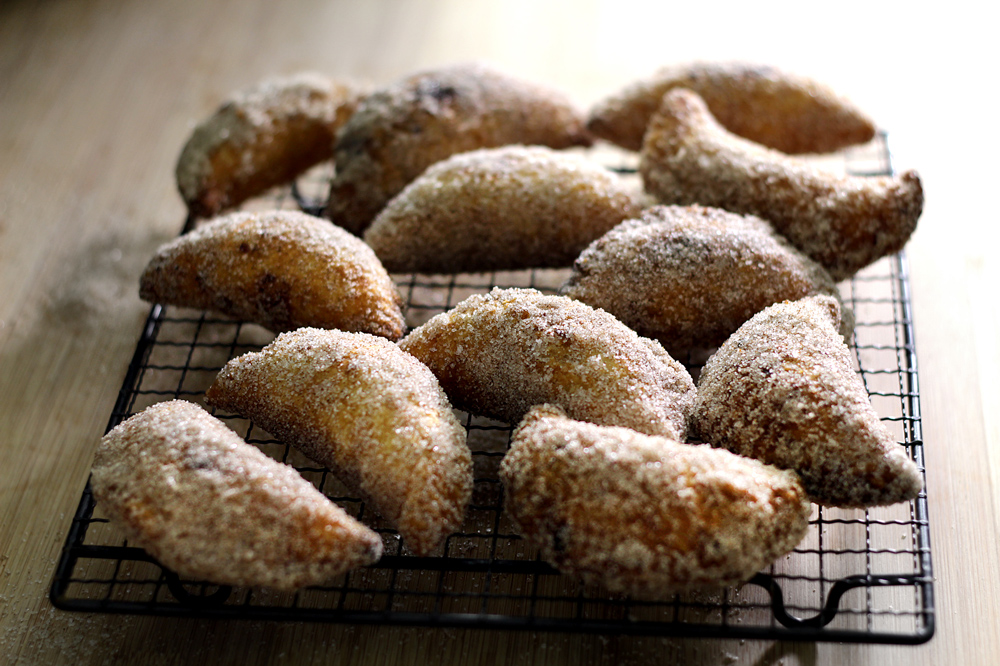 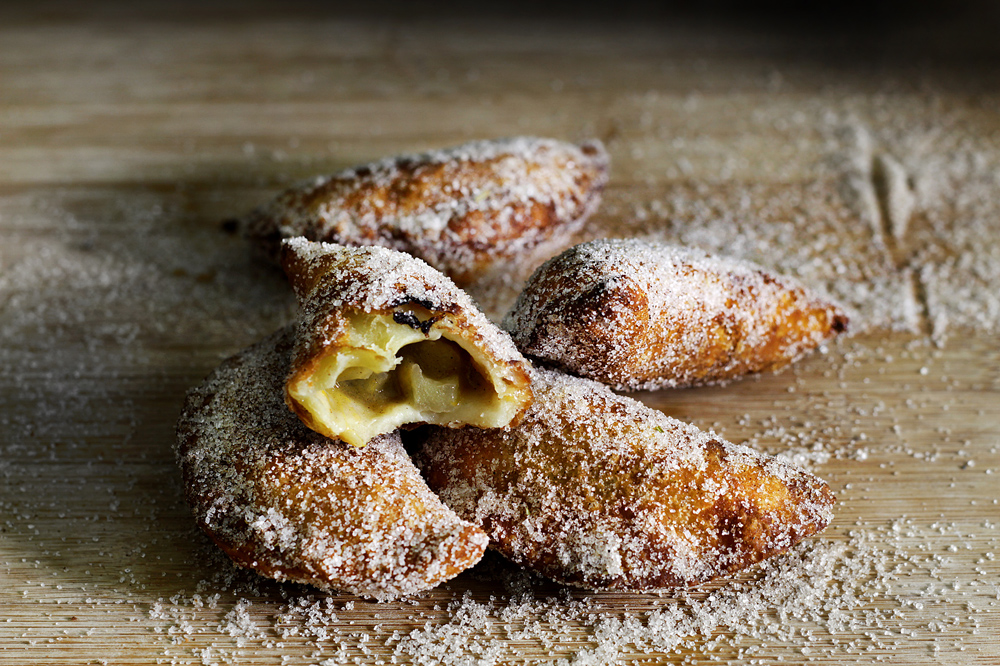 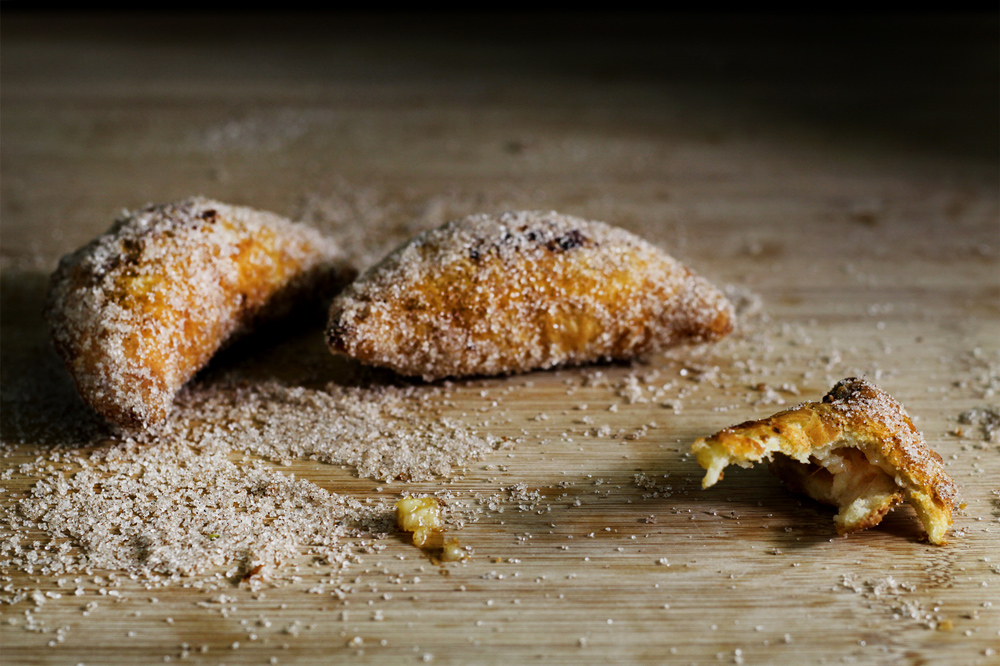 It would fell easier to just forgo cardamon in the ingredients list but I URGE you NOT to.  It contributes a flavour that is unlike any other spices and is what makes this recipe taste unique.  Ground cardamon may not come as available as most ground spices.  Chances are it is mostly sold whole, which is what I have.  So simply just grind the whole cardamon pods in a spice-grinder/coffee-grinder, and keep it in an air-tight jar.

UPDATE 2013/11/06:  I forgot to mention the type of persimmon that’s suitable for this recipe.  Do not choose FUYU persimmon which is crunchy and more apple-like.  My No.1 choice would be a Chinese variety with a relatively lower level of tannin/astringent (it gives a bitter taste and unpleasant mouth-feel if eaten unripened), that almost looks identical to FUYU, but ripens/softens beautifully into melty flesh.  But if unavailable, another common variety called HACHIYA (more heart-shaped or triangular than round), although contains a higher level of tannin/astringent, can be used if it’s fully ripened.

Make the filling:  Peel and remove the cores from the apples, then cut into smaller-than-bite-size cubes.  Add the apples, unsalted butter, sugar, lemon juice, ground cinnamon, ground allspice and grated nutmeg in a skillet.  Cook over medium-heat while stirring occasionally, until the apples are soft and the sauce is very thick, sticky and dark brown, approx 5 minutes.  Meanwhile, remove the flesh from the persimmons and discard the skin.  It can be a little tricky to do so with ripen persimmons and sometimes you have to “squeeze” the flesh off from the skin.  You’ll need 2 ~ 3 persimmons to get 185 grams/6.5 oz of flesh.  Smash the persimmon flesh with a fork and set aside.

Once the apples are ready, remove the skillet away from the heat and add the persimmons.  Stir to mix up all the ingredients evenly, which at this point should be quite runny and “saucy”.  The persimmons should give out some juices and cool down the apple considerably.  Add the cornstarch and vanilla extract, and mix until there’s no visible clumps of cornstarch.  Return the skillet back to medium-heat and cook until the mixture has thicken up completely. Continue to cook for 2 more minutes to reduce it even further.  Transfer the fillings into a bowl and chill in the freezer for 1 ~ 2 hours until borderline frozen and workable (Don’t bother working this filling at room-temperature).

Make the pie crust:  In a food-processor (or you can do this inside a large bowl with a pastry blender), mix together all-purpose flour, baking powder and salt.  Add the cubes of very very cold unsalted butter, then pulse until the mixture resembles a very COARSE meal, with the largest bit of butter about the size of a large pea.  Add 4 tbsp of iced apple juice and pulse 2 ~ 3 times to incorporate, then another 4 tbsp and pulse 2 ~ 3 times again.  Check the consistency of the dough by pinching a piece of it together and see if it stick easily.  You’ll most likely need to add another 2 tbsp of iced apple juice to bring the dough together.  Now transfer the dough onto a working surface and knead JUST A COUPLE OF TIMES to bring it into a big ball.

Press the dough into a flat disk, wrap with plastic wrap and chill in the fridge for at least 1 hour before using.

To make the pies:  Lightly dust the surface with flour and roll the pie dough out into a thin sheet, NO THICKER than 1/8″ (3 mm).  Use a round pastry-cutter (about 3 1/2″ in diameter) to cut out as many wrapper as you can.  Gather the scraps, roll it out again into a thin sheet and again, cut as many wrappers out as possible.  You should get about 16 ~ 18 wrappers out of this dough.  Take the filling out of the freezer, which should be relatively hardened but workable.  Place about 2 tsp of fillings in the center of a wrapper (don’t even think about stuffing more than 2 tsp… or good luck with closing that one), dab a little water on the edge then close the wrapper and pinch the seams together FIRMLY with your fingers.  Use a fork to make DEEP impressions along the seam/edge to make sure it is securely closed.  Repeat with the rest.

If at any given point the fillings start to thaw and soften, return both the wrappers and the fillings back to the freezer for 15 min to firm up.  Once you are done with making all the pies, keep them in one single layer on a sheet pan and keep in the fridge (or freezer I suppose) until needed.

To fry the pies:  Evenly mix sugar, ground cinnamon and ground cardamon in a large bowl then set aside.

Add enough canola oil in any frying-pot until you have about 1 1/2″ (4 cm) deep of oil.  Heat the oil over medium-heat until when a wooden chopstick is inserted in, the oil bubbles up along the surface of the chopstick (supposedly the oil should reach 365ºF/185ºC, but I never measured).  Without crowding the pot, slowly lower 2 ~ 3 pies into the oil to fry (keep the rest of the pies IN THE FRIDGE).  Turning them occasionally until they are golden browned and crispy on both sides.  Drain through a slotted spoon for a few seconds then roll them in the spiced sugar.

Repeat with the rest.

It would be tempting to eat them immediately but I warn you, it’s piping hot inside.  Wait a few minutes… if you can. 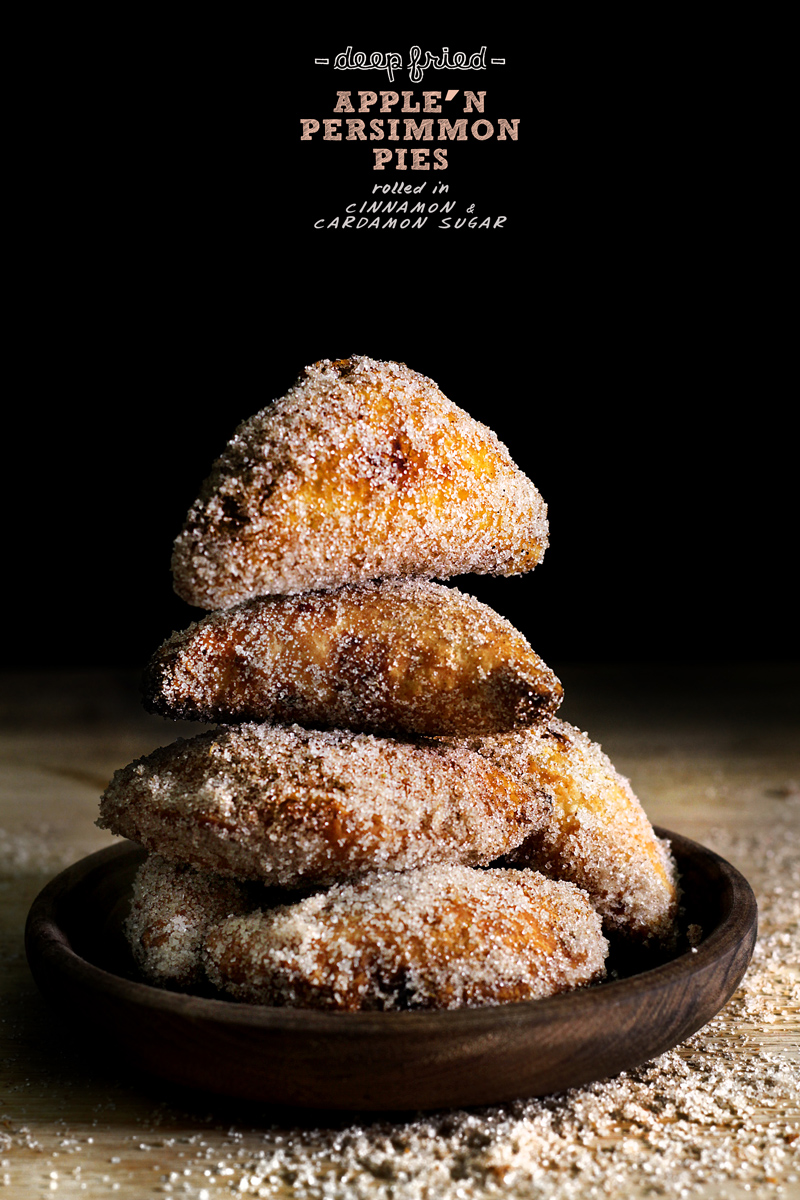