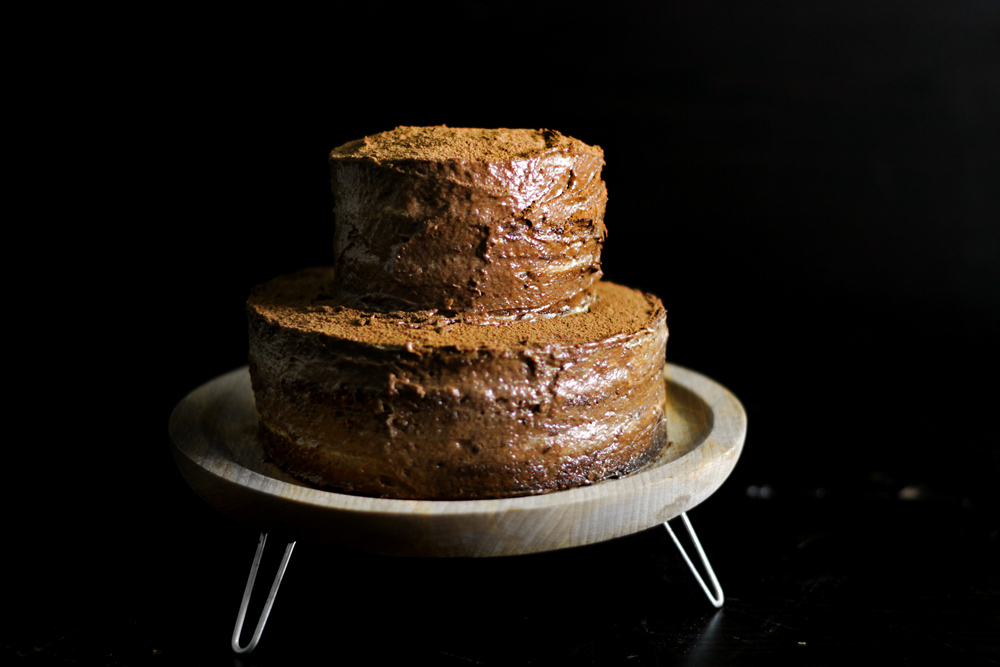 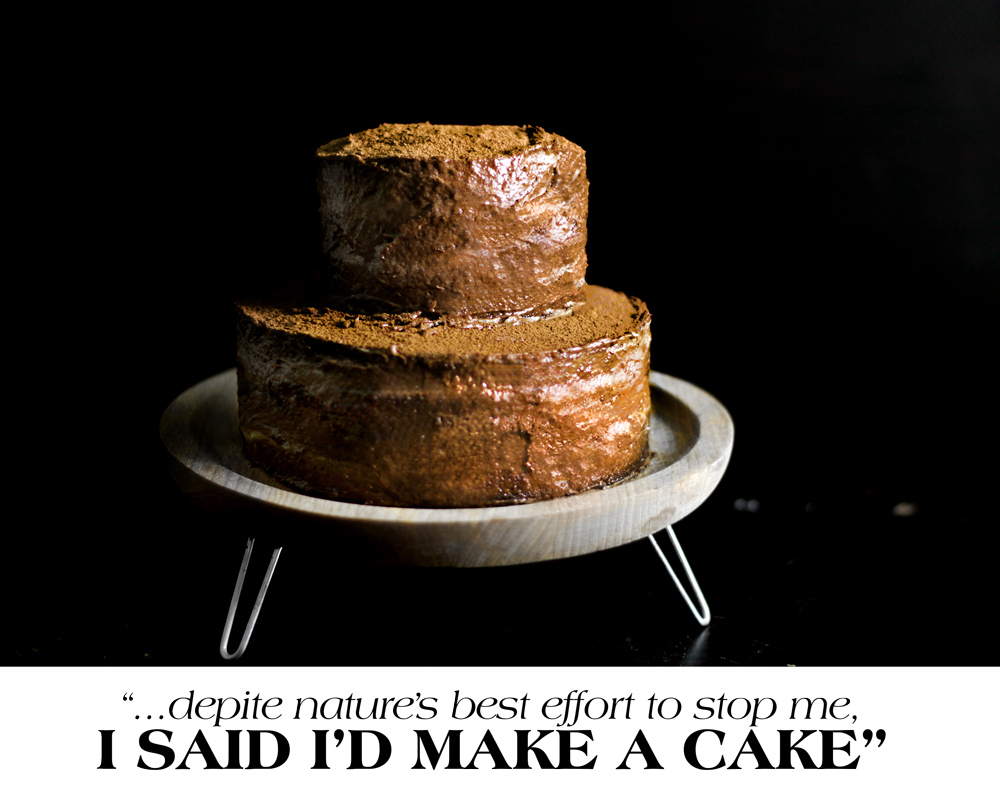 Last few days were a nightmarish montage of my extended kitchen-agony.  Three whole days covered in a choking dust of flour with smudgy grease from a beastly amount of butter and sugary stickiness haunting my finger tips.  Electrical outlets being pushed to a near brink of melt-down and an unprepared dishwasher running past its adrenaline threshold into a disoriented state of ecstasy.  After three nights of stress-induced binge eating, two stone-tough should muscle groups and one extremely cranked neck which all ended in a final coma that took place in a dark and questionable foot-massage parlor, despite nature’s best effort to stop me, I said I’d make a cake. 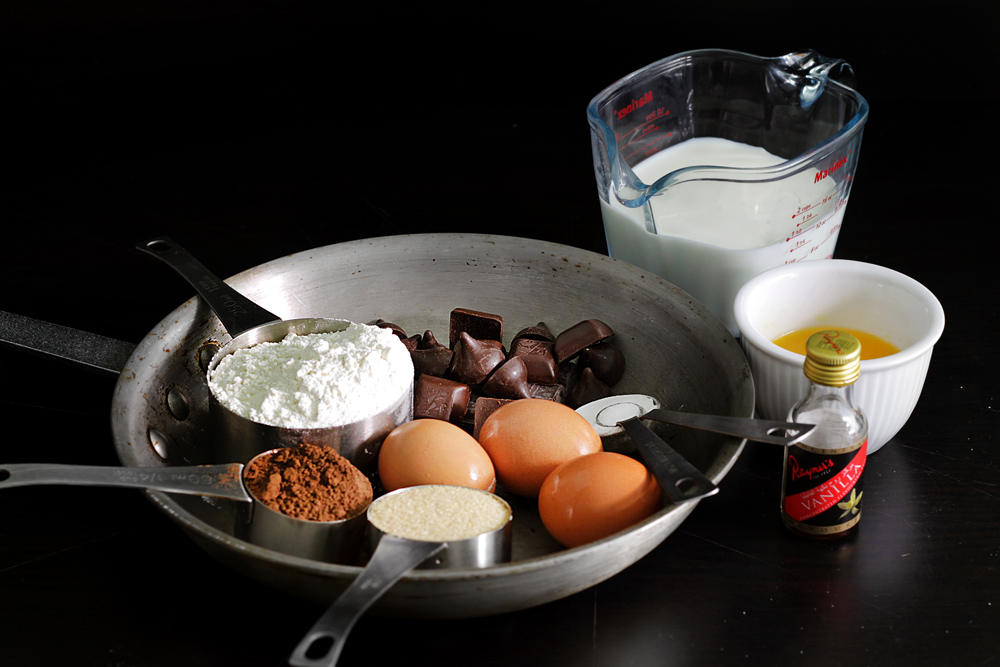 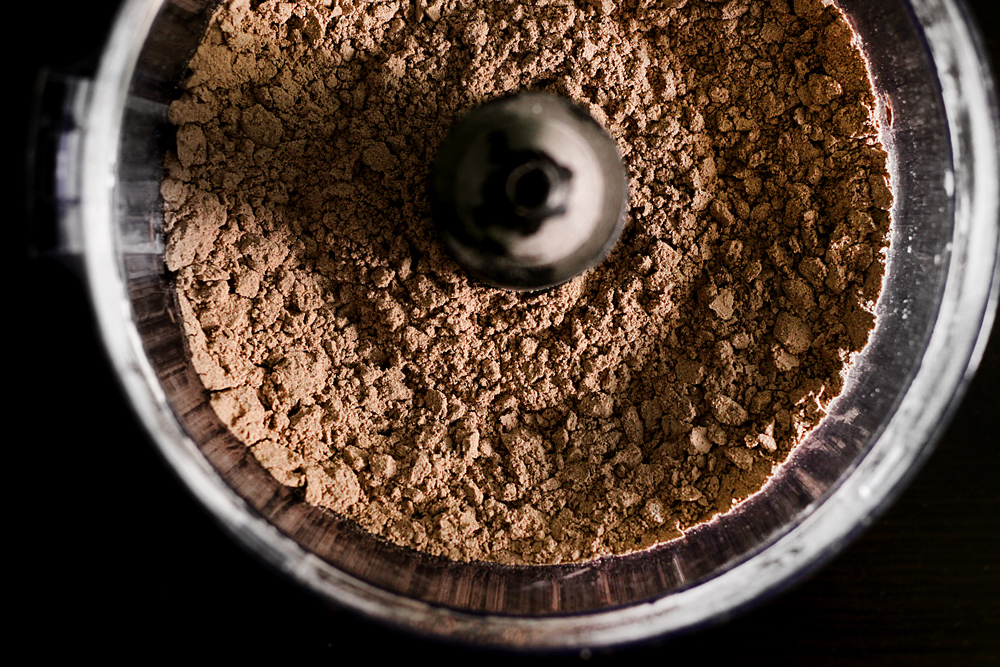 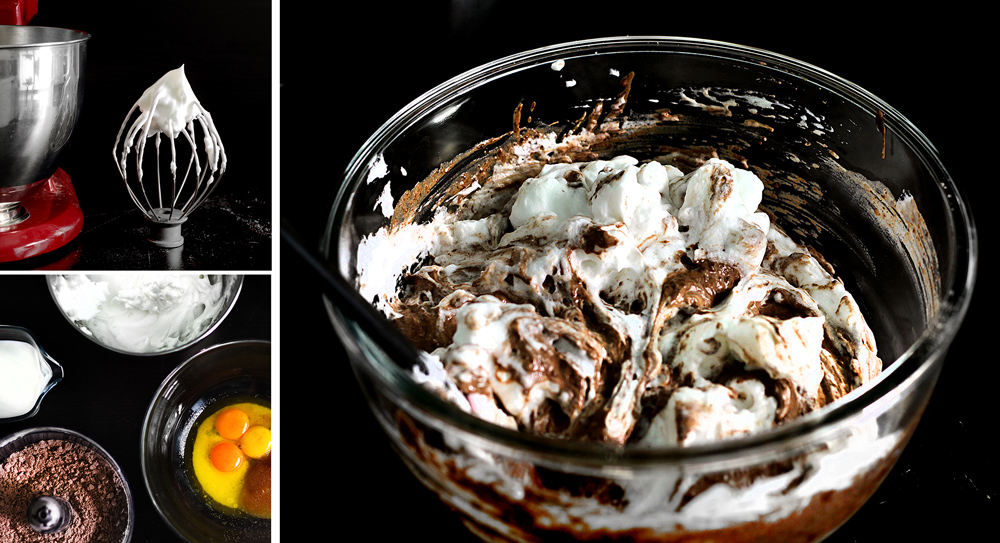 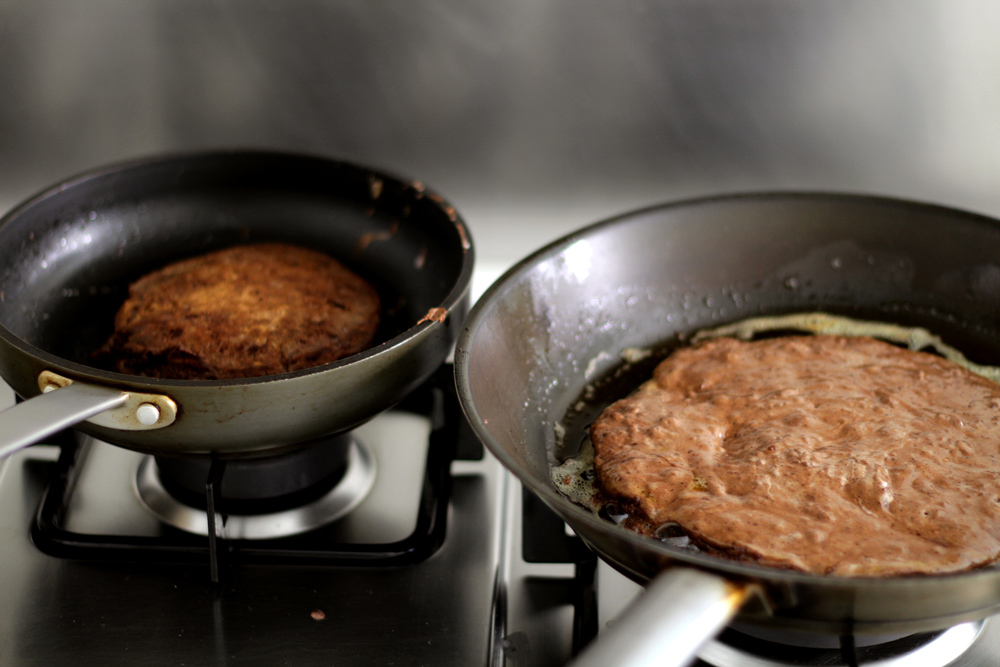 Well… technically… a pancake-cake.  Am I saying that the epic cake-project that caused a world of fuss and pain is after all… a no-bake cake?!  Well, yes… which may cause you fury and therefore urge to make jabbing-remarks on the amateurish appearance of my cake, well, don’t.  The cake, is but a chiiild.  And after days of intense bonding, I will go to extreme measures to protect its feelings so stawp it, you cake-bullies!  So what it’s not the home-coming queen of tiered cake because I don’t have a jedi-steady hands when it comes to buttercream, and so what if I’m telling the world not only that I suck at baking but NO-baking as well because guess what?  Proud to be!  The whole idea is that you, who are the true wielder of the stainless steel palette knife (which I don’t have and used a butter knife instead…) and the whisperer of piping bag can, if need be, make a cake like it’s breakfast. 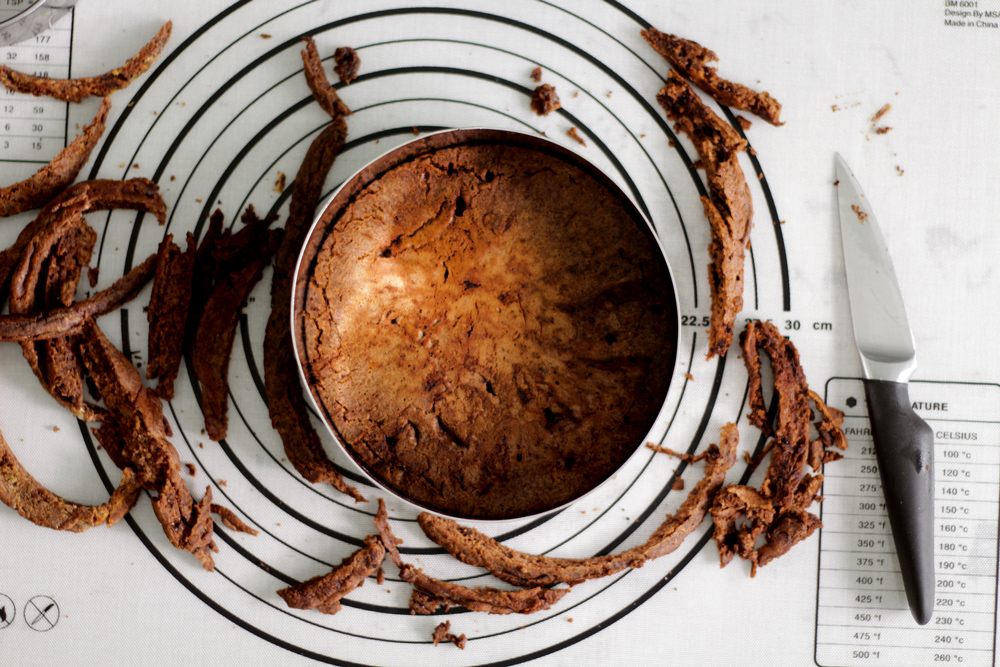 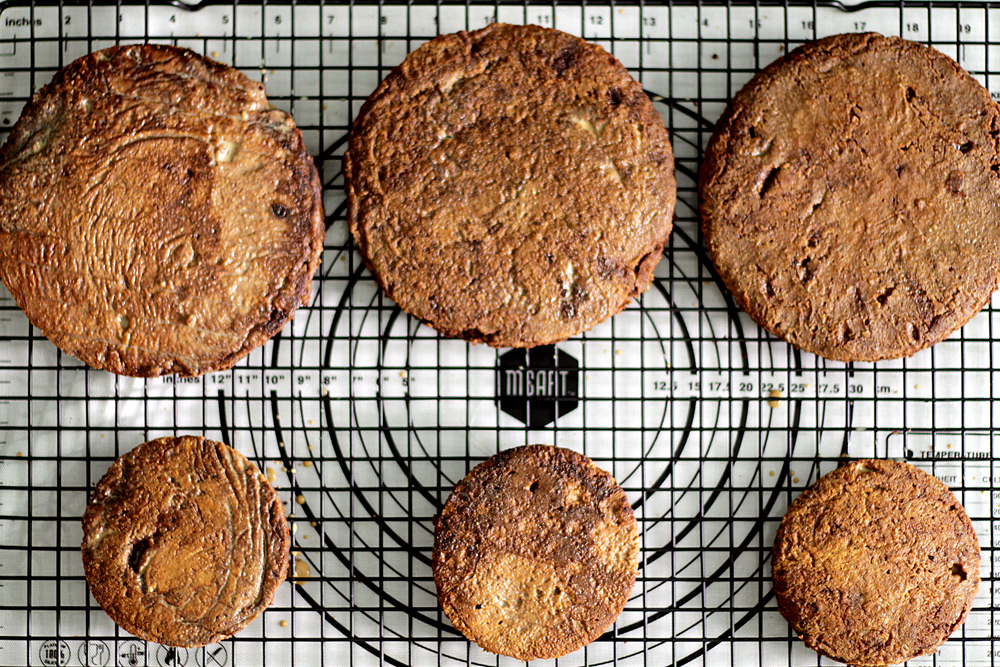 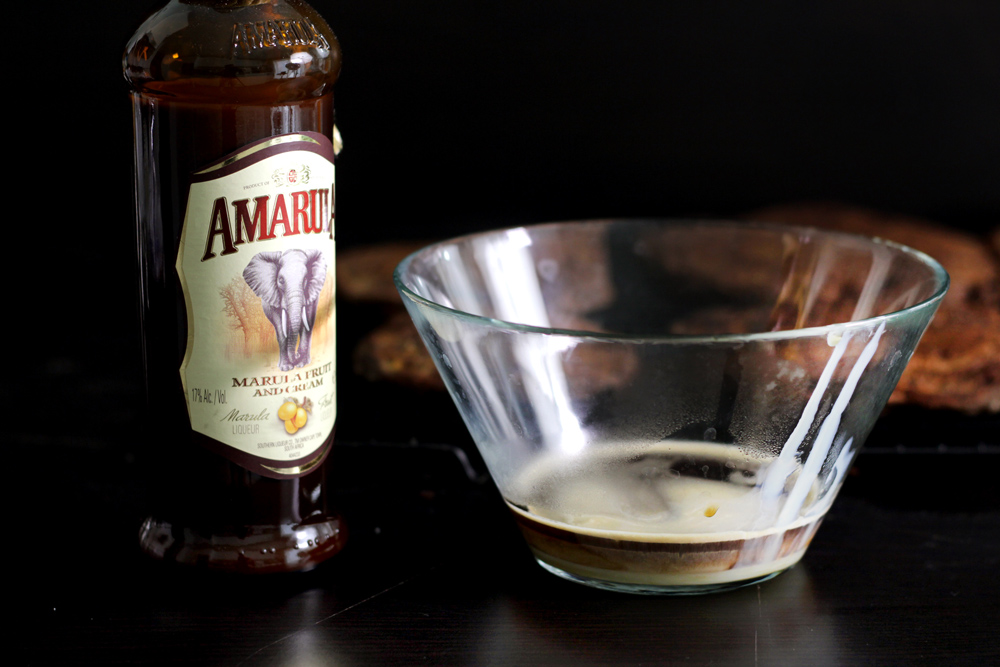 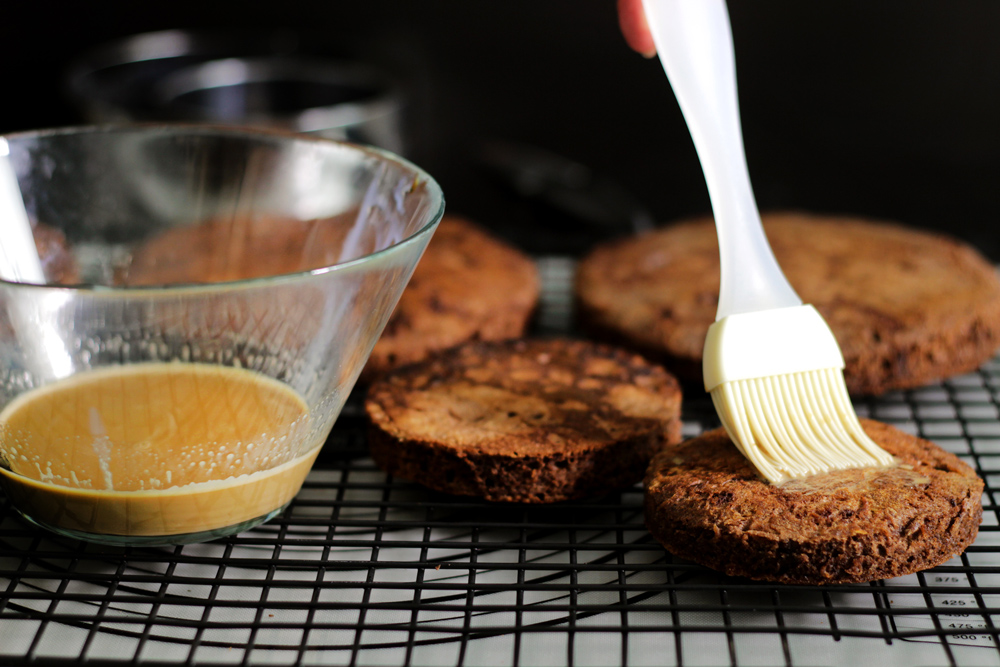 I mean how long does it take for you to make pancakes in the morning?  It comes less naturally for me but I’d imagine a walk in the park for you.  And how long does it take for you to bake a two-tiered cake?  …Exactly.  The whipped egg whites and espresso syrup will turn these pancakes indistinguishable from a real cake.  No creaming of the butter which I hate more than washing dishes, no inter-mixing of dry and wet ingredients which I rather wash the dishes again, and no slicing of the cake and yet, a true multi-layered cake with a higher ratio of buttercream as a whole!  Oh, speaking of buttercream… 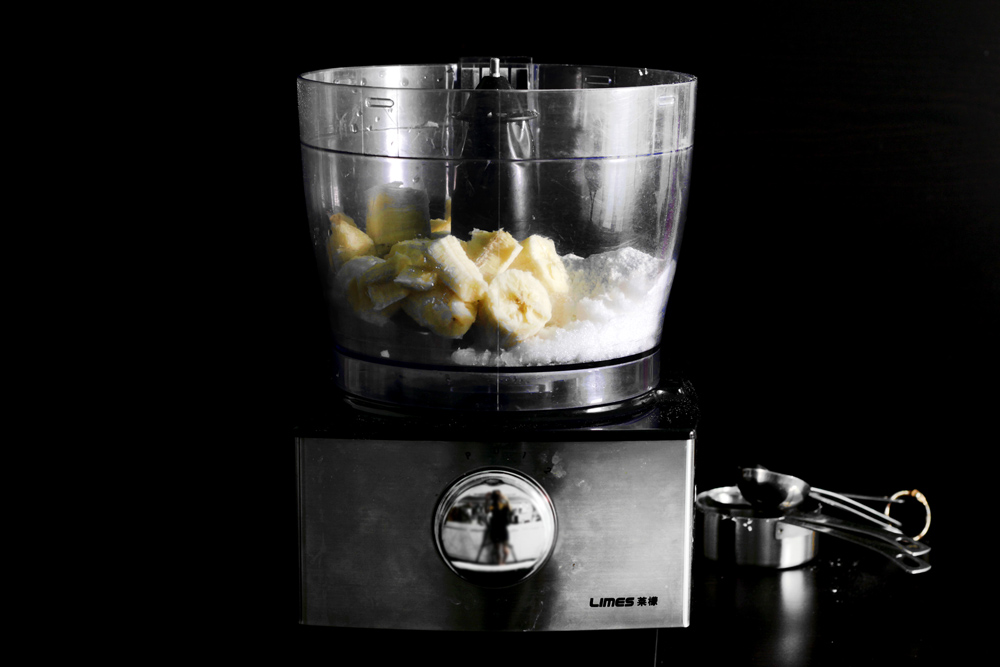 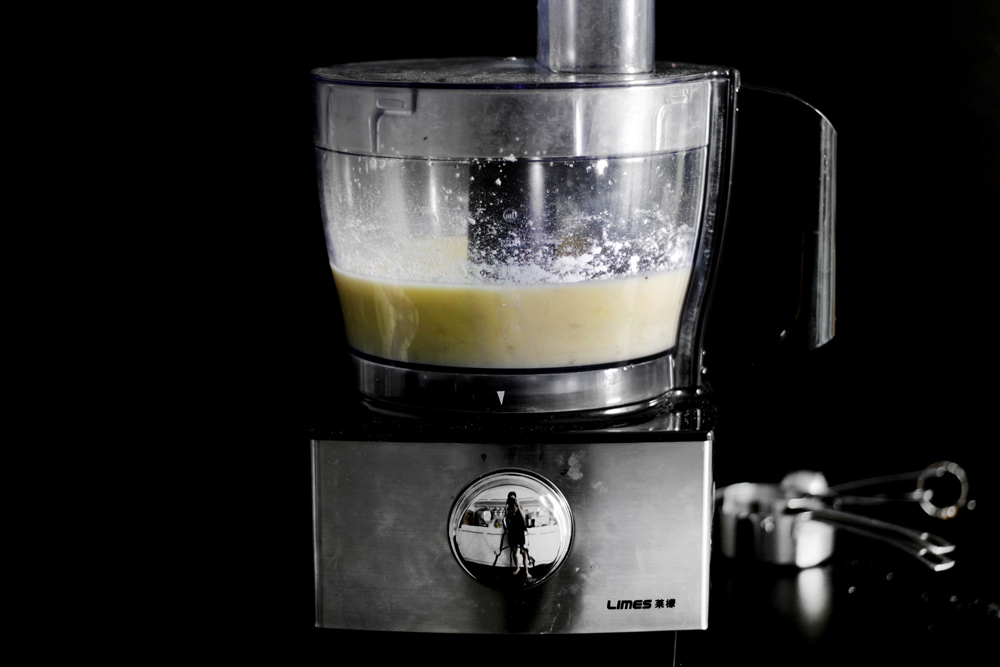 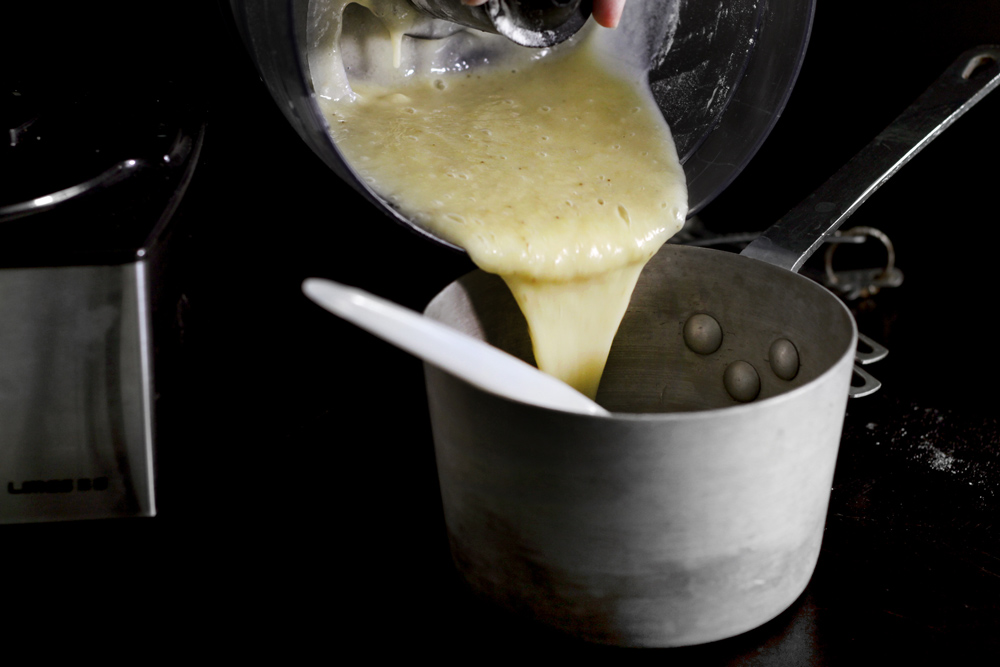 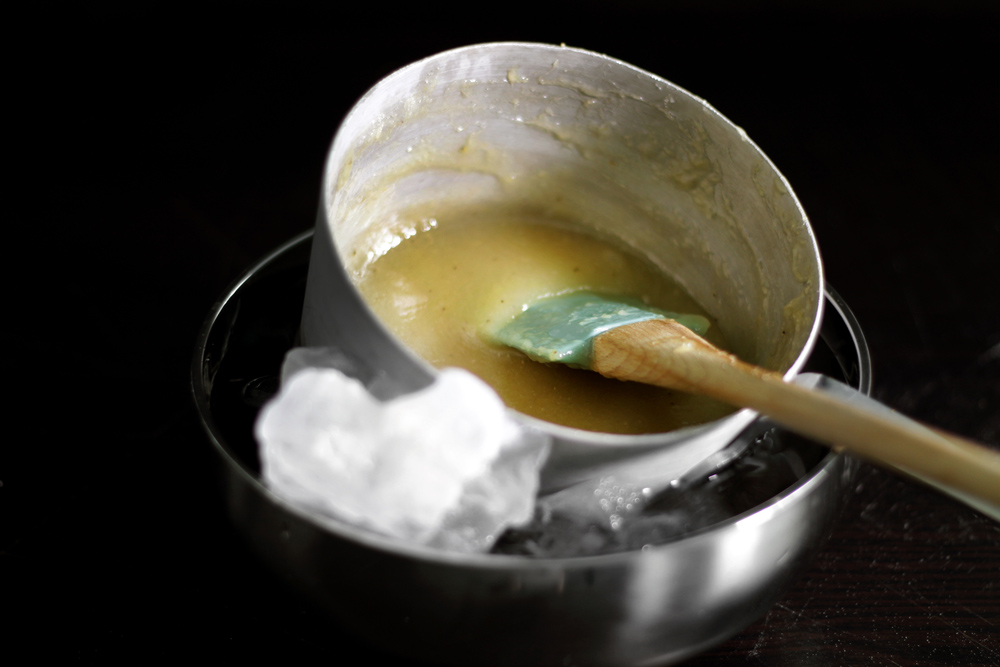 How did it turn out the last time you tried to incorporate bananas into a cream-filling-of-some-sort?  Yeah, these little seemingly juice-less assholes will BLEEEED moistures and turn your mixture into a puddle of olive-brown disaster.  So just a little bonus for you since you’ve been so nice not to insult my cake and all, if you puree the bananas with cream of tartar, sugar and flour then cook it until thickens, they transform into… intense BANANA JAM that doesn’t pick fights with the other kids (say… butter).  And you’ll have a spongy, soft chocolate cake-tower with creamy, intensely banana buttercream without an oven!  I don’t know about you crazy bakers out there, but this calls for a celebration with cakes. 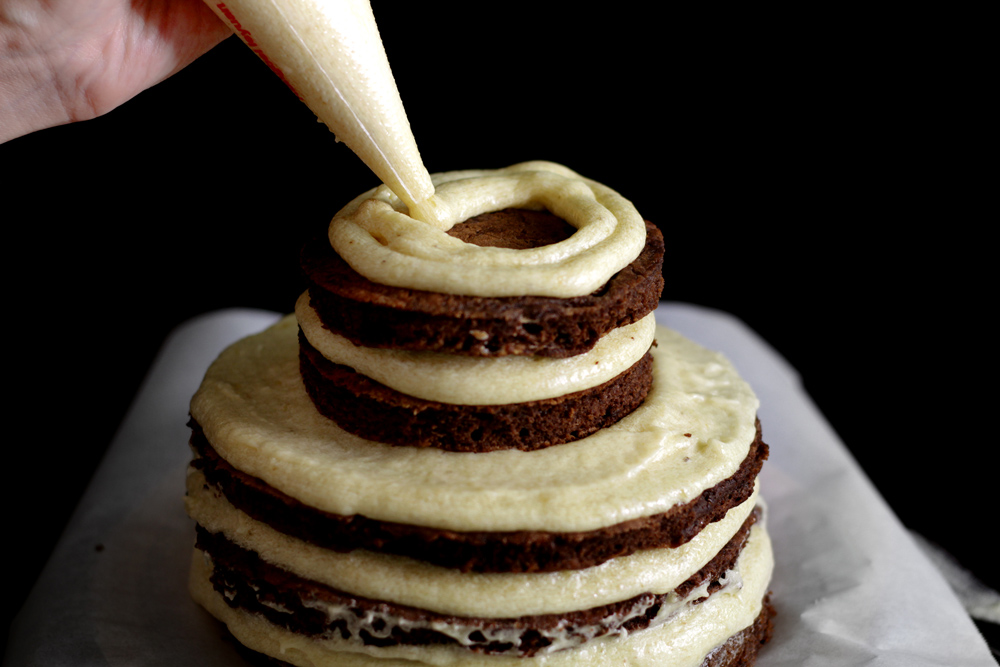 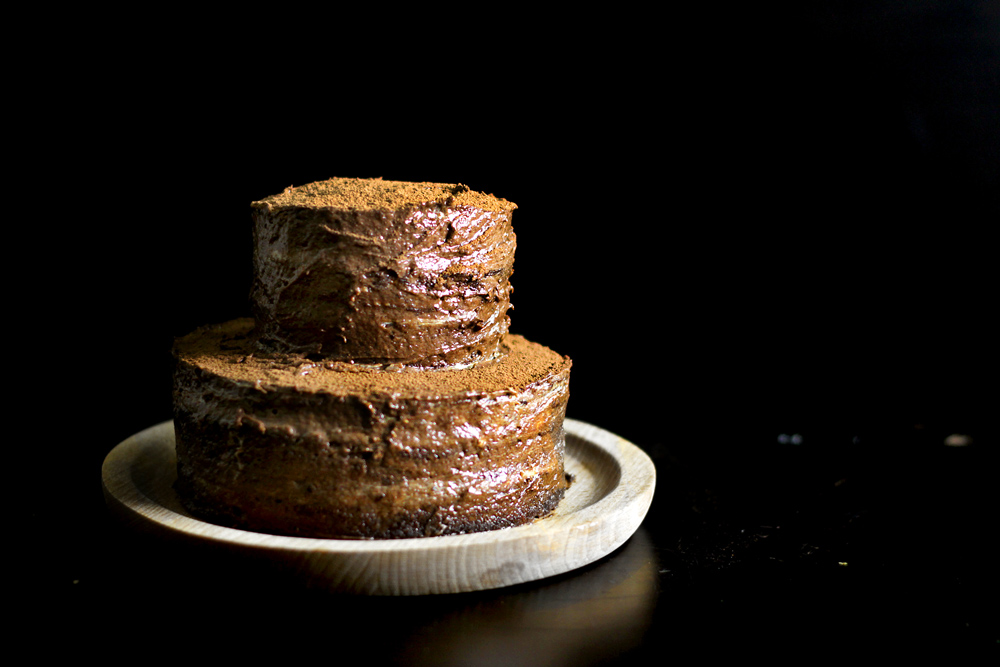 After making a total of 4 pancake-cakes, there is something that I learnt after all:

To make the chocolate pancakes:  Combine 3 large egg YOLKS, 4 tbsp of melted unsalted butter, whole milk, light brown sugar and vanilla extract in a large bowl and whisk until smooth.  In a food-processor, add cake flour, dark chocolate pieces, coco powder, baking powder and salt.  Run on high until the dark chocolates are the size of breadcrumbs, then set aside.  Use a hand-held mixer/stand-mixer or by hand, whisk the egg whites until soft peaks form (add a 1/4 tsp of cream of tartar would help), then set aside.

Add the dark chocolate/flour mixture into the milk mixture and slowly whisk until combined.  Add 1/2 of the egg whites and stir with a spatula until mostly mixed in (you don’t have to worry about folding it gently at this point), then add the remaining 1/2 of egg white, and fold the egg whites into the batter carefully without losing all the air inside.  It doesn’t have to be smoothly combined, a little streaks of egg whites here and there is fine.

Prepare 2 circle ring-molds, 4″ (10 cm) and 6″ (15 cm) in diameter (biscuit cutters work perfectly) and set them by the stove just so you have a good idea how big your pancakes are gonna be.  If you don’t have circle ring-molds, that’s fine.  Just cut out 2 pieces of circle-parchment paper that are the same size in diameter.  Set 2 non-stick skillet over medium heat, and melt 1 tsp of unsalted butter in each.  Start cooking pancakes that are A BIT LARGER than the ring-molds (you’ll want your pancakes to be 5″ (13 cm) and 7″ (18 cm) in diameter).  You should have enough batter for 3 small pancakes and 3 large pancakes, and they should be nice and fat, about 1/2″ (1.5 cm) in thickness.  Cook the pancakes until nice and browned on each side and set them over a cooling rack.  Add more unsalted butter to the skillet for each pancakes.

Use the ring-molds to cut each pancakes into identical sizes, 3 small ones and 3 large ones.  Or place the circle-parchment paper on top of the pancakes and cut it with a small knife.  SAVE THE SCRAPS.  Mix together expresso, amarula liquor and sweetened condensed milk.  Brush the mixture on top of the pancakes and let it be absorbed, then apply again.  Stack and wrap the pancake with plastic wrap and chill in the fridge until needed.

To make the banana buttercream:  Peel and break the bananas into large pieces, add to a food-processor with granulated sugar, flour and cream of tartar.  Run it until the mixture is smoothly pureed.  Cream of tartar is REALLY IMPORTANT to keep the puree from turning brown!  Transfer the mixture to a pot and set over medium heat.  Keep stirring until the mixture starts to simmer and thicken up, then keep cooking/stirring for another couple of minutes.  Place the pot into an ice-bath to help it cool down rapidly (but careful not to let the ice water spill over into the pot).  Once cooled down completely, transfer the mixture back to the food-processor, add the butter, one small piece at a time, and keep running on high until smoothly combined/whipped (if you want to use a stand-mixer, use the whisk attachment on medium-high speed).  Transfer to a bowl and cover with plastic wrap.  Chill in the fridge for an hour and save the coco powder for later.

To assemble the cake:  Place 2 piece of parchment paper on the plate, overlapping slight on the edge.  Place 1 large pancake on top of the parchment papers where they overlap (then you can pull the parchment paper away once you’re done with buttercreaming the cake and, no mess!).  Apply a layer of banana buttercream on top about 1/4″ (0.5 cm) thick.  Then break the pancake-scraps into small pieces and scatter a few over the buttercream, then top it with another piece of large pancakes.  If your pancakes aren’t perfectly unified in thickness and therefore the surface isn’t levelled, just stick an extra piece of pancake-scrap underneath the “low point” to push it up.  Repeat the steps with all the pancakes until you have a two-tiered cake tower going.

Mix the rest of the banana buttercream with 3 tbsp of coco powder until smoothly combined.  Cover the surface of the entire cake with the banana/coco powder buttercream.  Your cake would look MUCH PRETTIER if you freeze your cake for 10~15 min after the first coating, then apply a second coating for a perfect finish.  I didn’t because there’s no way this cake will fit into my sad freezer.

Dust coco powder on the top-surface of the cake and YES!  We’re done! 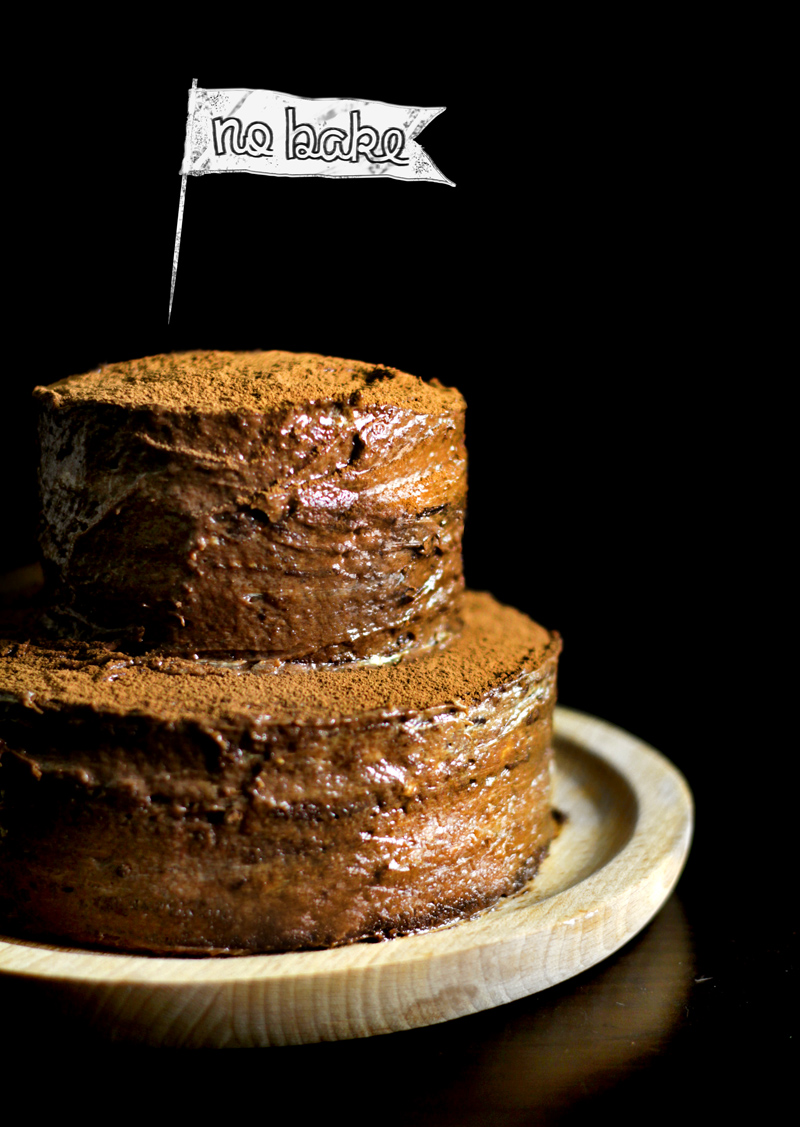