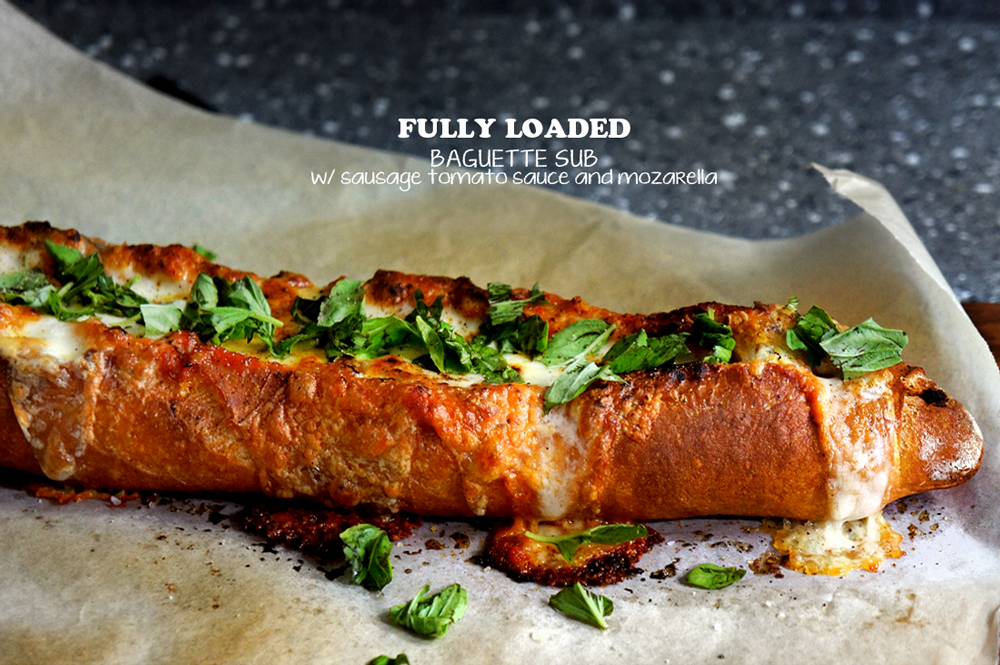 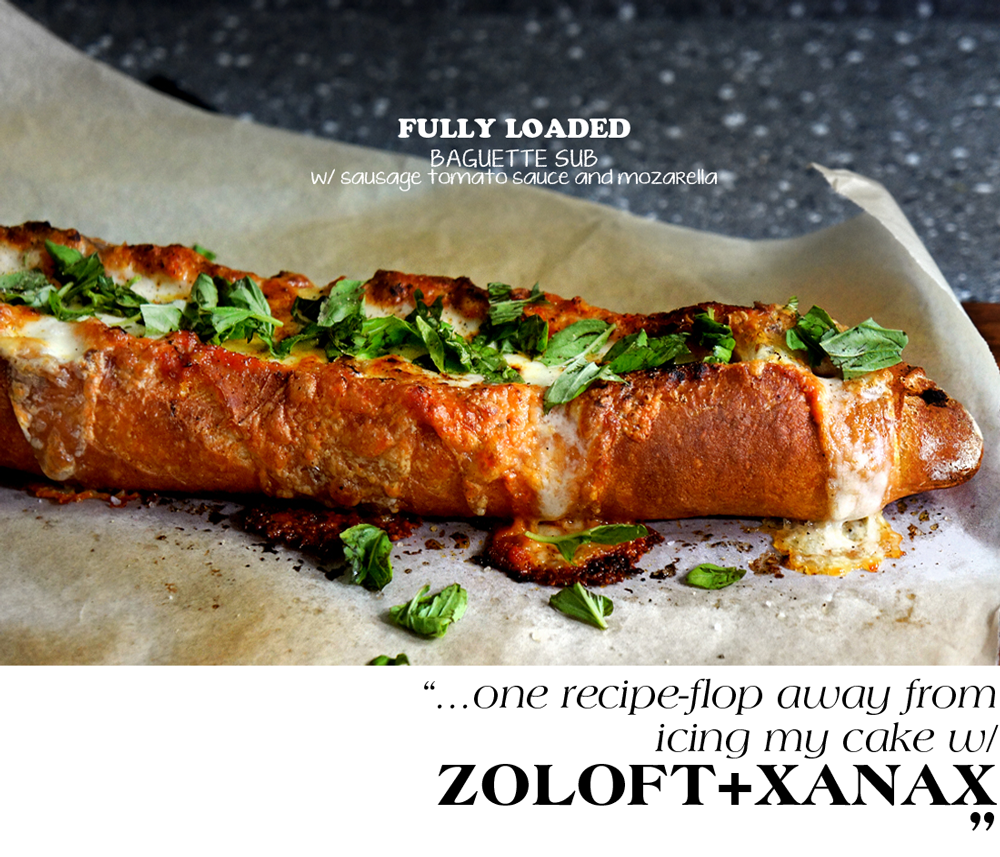 Wow!  What a weekend last Saturday, uh?!  Golden Globes?  Did you watch it?  What a fantastic sequence of showmanship one after the next uh?  First came Jodie Foster’s neurotic ramblings of a speech though I’m not going to argue with the world who apparently thought she was phenomenal.  Then Oh-glory’s-the-name-of-vengeance Ben Affleck won best director and fired a bullet with his love-declaration for Gardner right in the heart of who else but J “LOW”!  Oh snap!!  And how about Ann Hathaway giving all she’s got on an AMAZING performance acting surprised at winning supporting actress!  Flaaaaawless!  That’s another award in itself I’m telling ya.  OH oh and Kristen and Will’s HILARIOUS little team-up was PURE comedy gold!  Missed it?  Geeet ooout of heeerree!!  Finally FINALLY Tina Fay and Amy Poehler’s opening act was marriage made in heaven… come on… I laughed the tears out of myself! 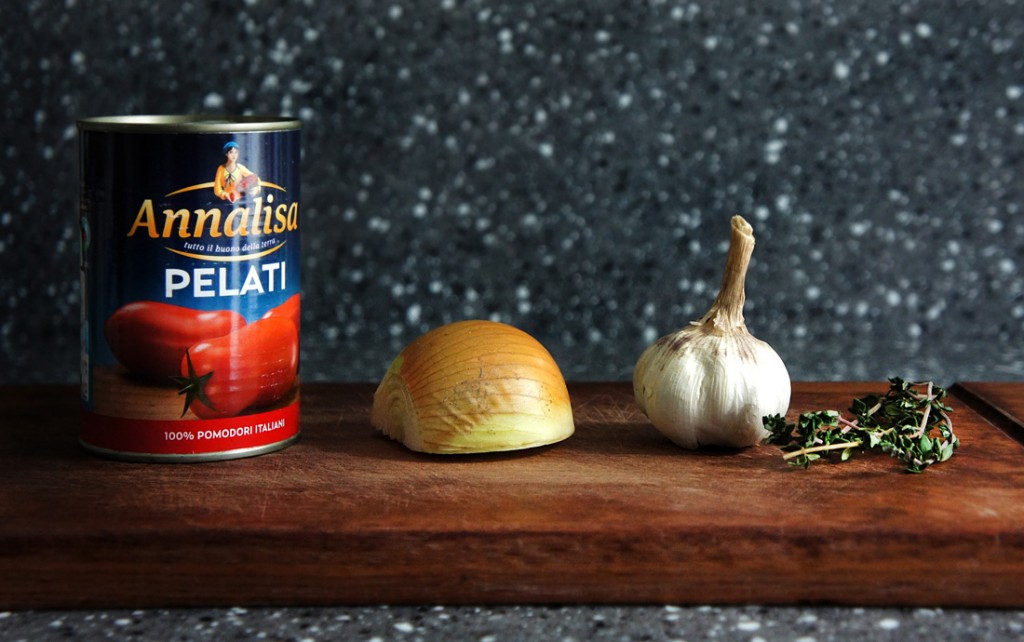 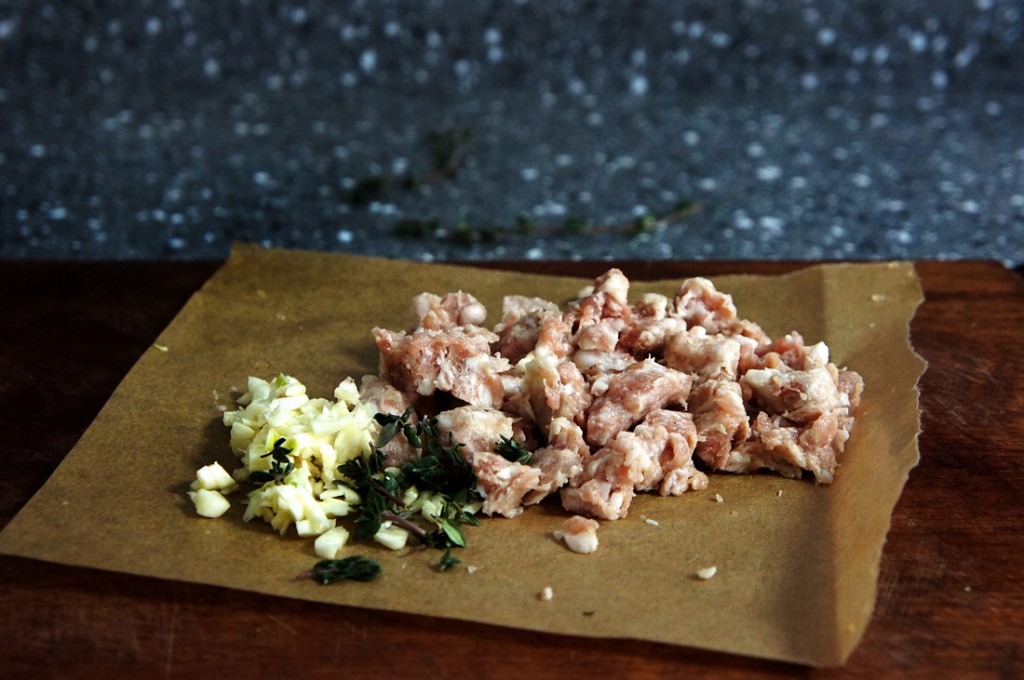 Excuse me, I got the sequence all scrambled?  Well if you must know it was because the entire show was gathered and pieced together with broken clips from Youtube here and there.  Yeah, no comedy is delivered with more solid punches when it pauses for buffering…  But NOT that I’m complaining because I was eternally grateful to have some scraps of entertainment to keep me sane as we were laying low in our bunker to avoid the ALL-TIME-record-high pollution index in Beijing, a whopping 900+!!  30 times the acceptable level deemed by international standard!  Hooray!!  A free round of toxins for everybody!  Like I said, WHAT a weekend!  Fantastic days like this, I am usually one recipe-flop away from icing my cake with zoloft + xanax. 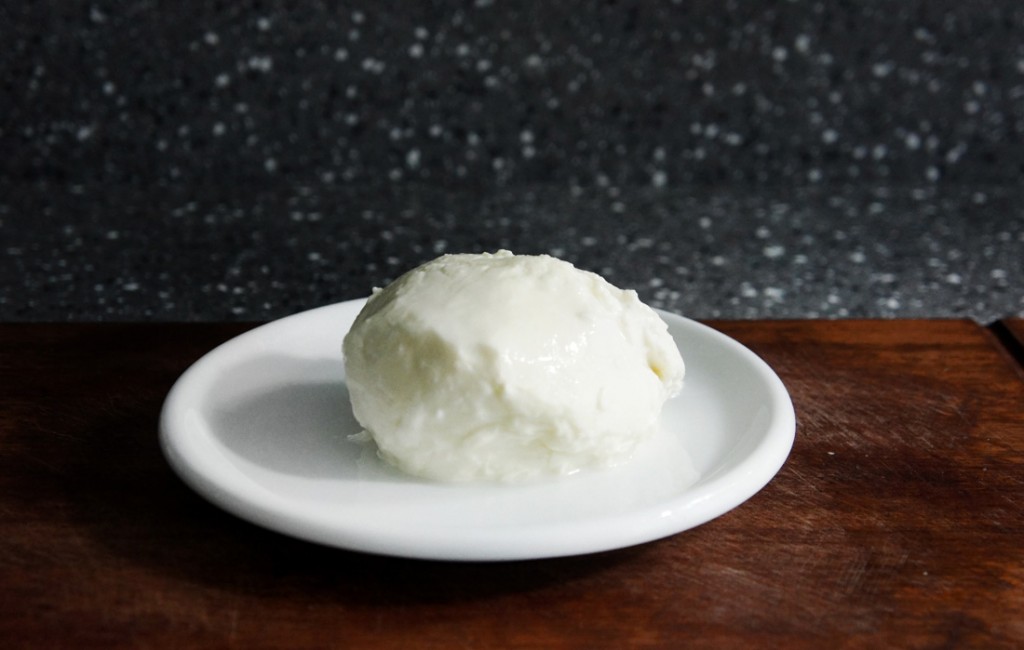 But Noooo.  Neeeeeeu flops that day my friend.  As life decided it wasn’t my time to dwell in an asylum chewing my hair to sleep, it gave me one my favorite comfort-food creation yet to date – the fully loaded baked BAGUETTE aka a steamy LOVE-BOAT holding an explosion of melty gooey bubbly cheesey and lava-y things!!  Oh man, it has managed to answer the question people don’t even know they were asking, to marry the  two very unlikely things into one beautiful unison, the soup bowl + the sandwich.  It’s a soubwich! 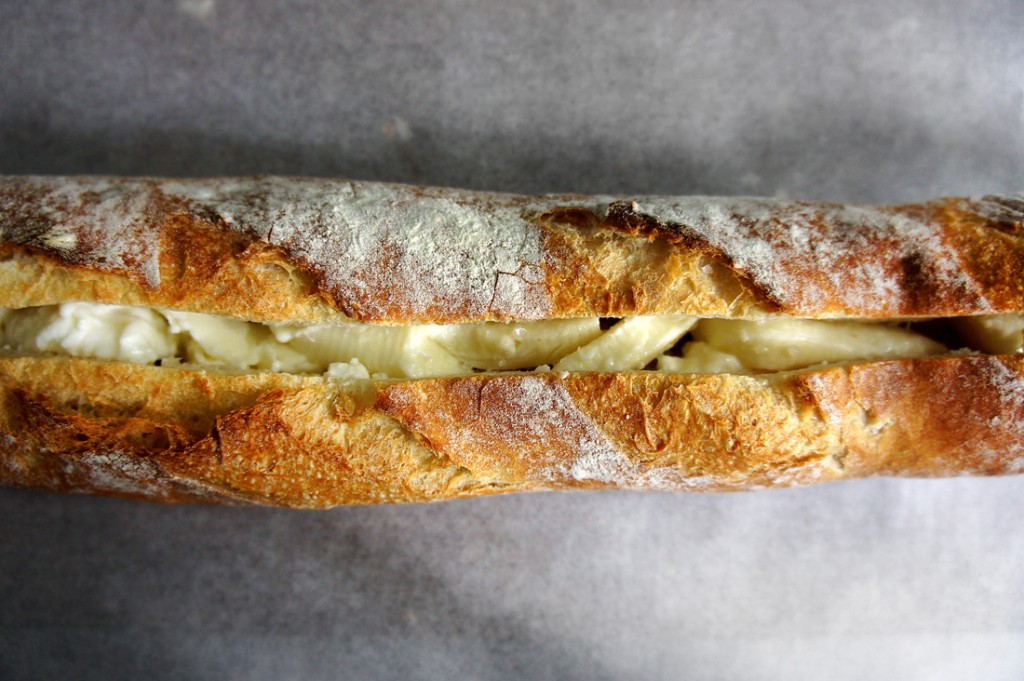 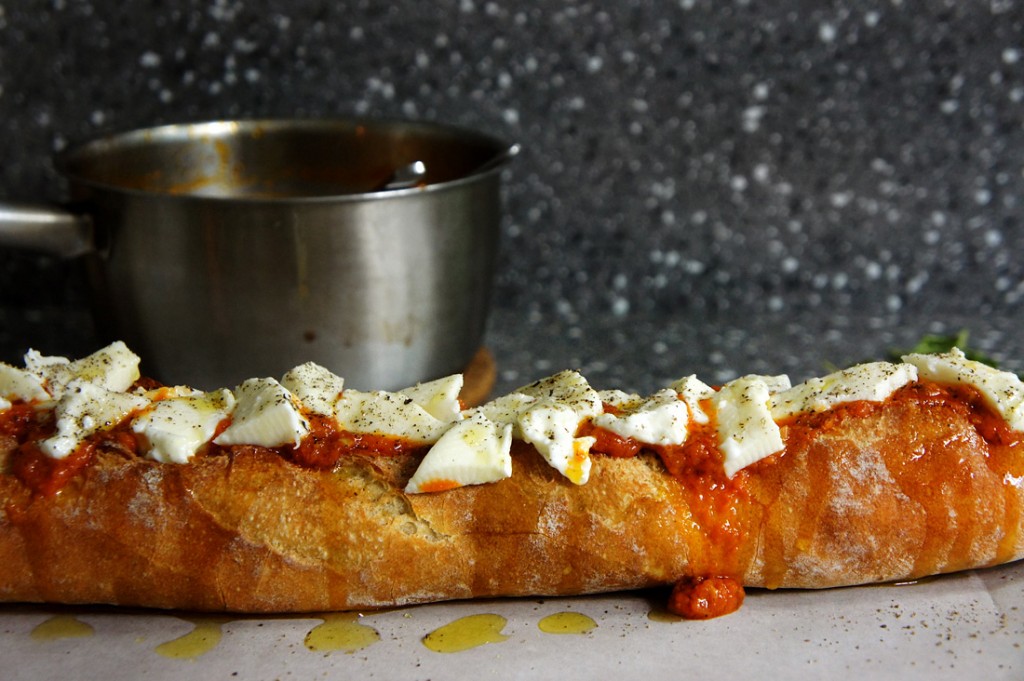 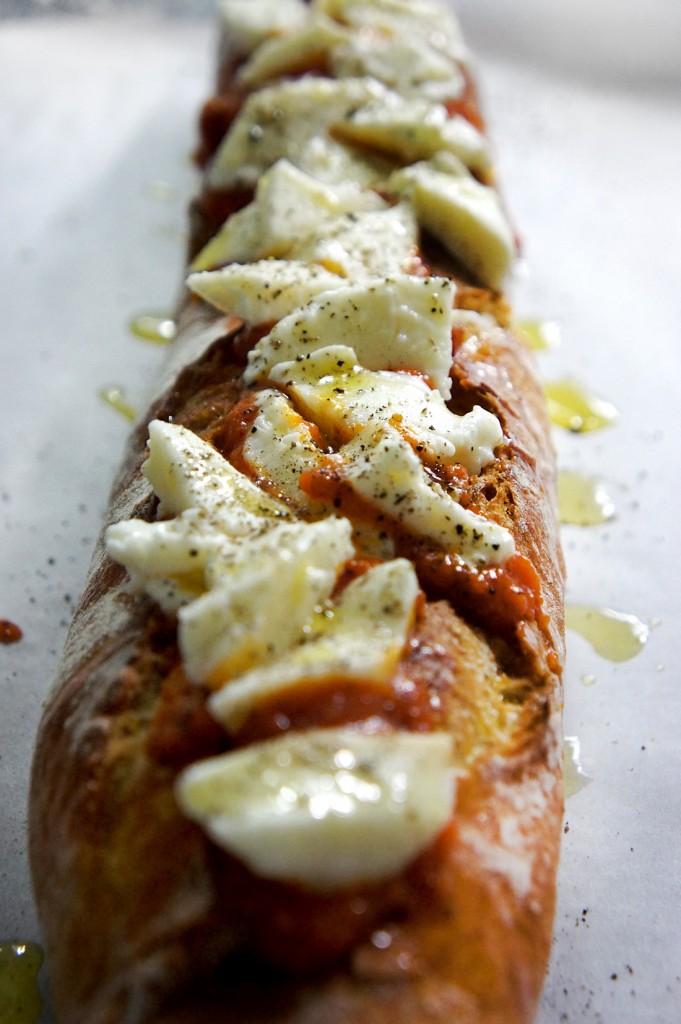 I’m telling you.  It.  Is.  Brilliant.  The baguette effortlessly holds something that’s saucier than what a sandwich can pull off, in this case a 15-min Italian sausage tomato sauce, and baked in the oven as fresh mozzarella melts off the side of its skin that gets revived in the heat to a crunchy delicious shell, while the center stays soft and chewy and filled with hot, lava-like substance.  As I bite into it I could hear Hugh Jackman sing (wolverine is singing… nothing more awesome than that).  Though this particular specimen only involves ingredients that are readily stocked in any respectable pantry but the possibility is really endless.  And as long as you keep it intact, this soubwich scores high in portability in any picnic occasions.  Remember picnic?  Oh of course you do because you are not stuck in Beijing where it lives and breathes DEATH-storm upon you every now and then.  Good for you.  Life is great. 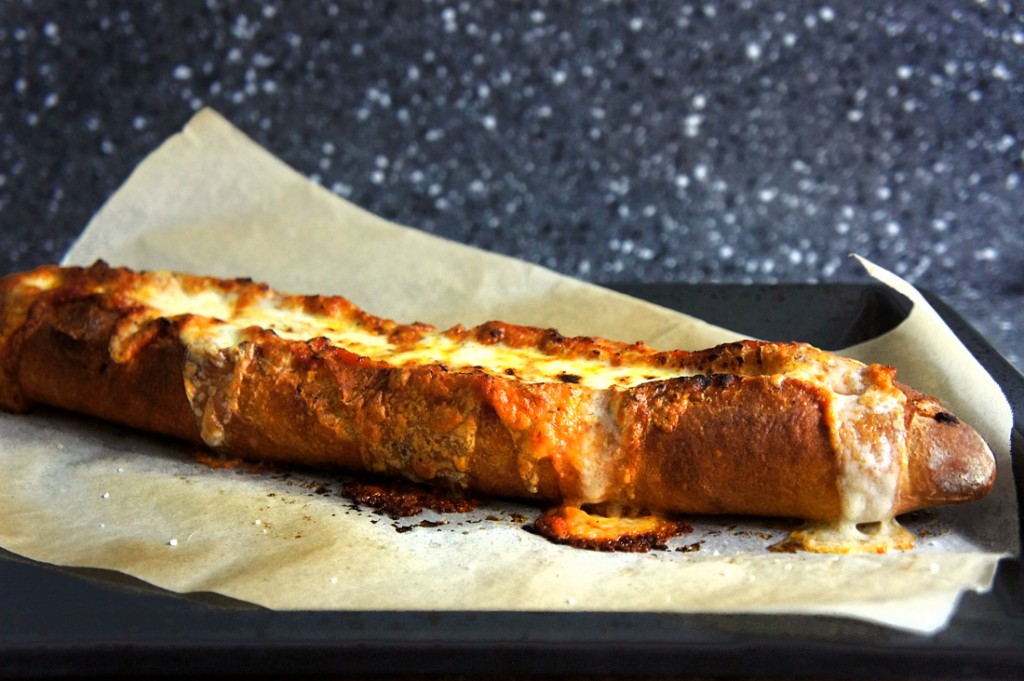 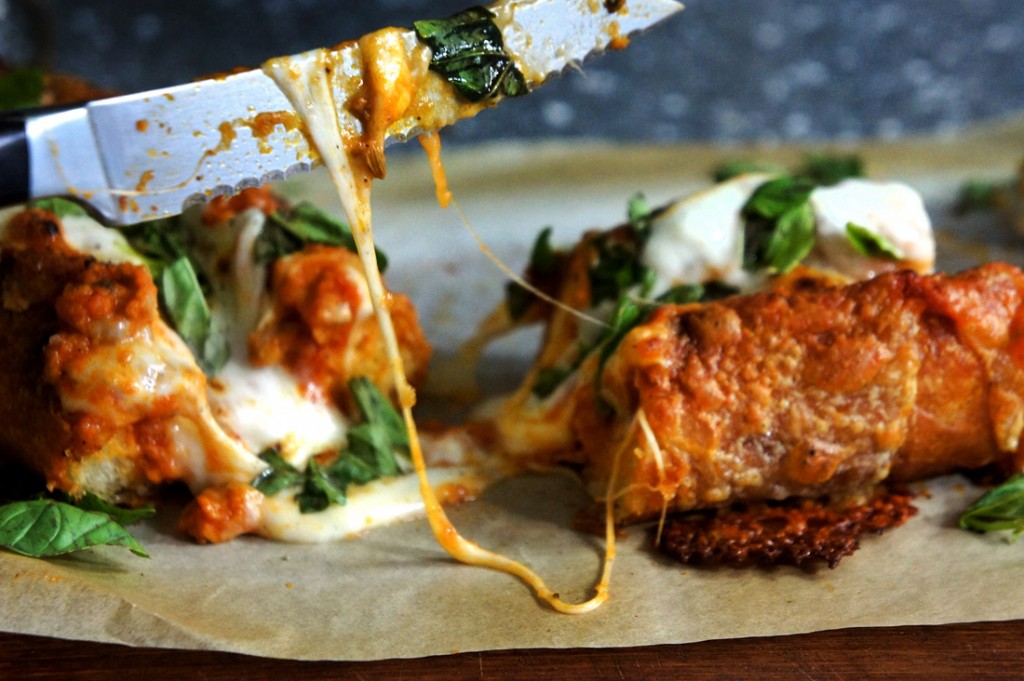 Take the sausage out of the casing and combine it with garlic, thyme and fennel seeds (if not already in the sausage).  Heat up 2 tbsp of olive oil in a sauce pot and start browning the sausages.  Meanwhile, puree the can of tomato with 1/4 of a small onion in a blender.  Once the sausage is nicely browned, add the pureed tomato.  Season with 1/2 tsp of salt and black pepper.  Stir and cook on medium heat until the sauce is reduced by 1/2, approx 15 min.  I recommend partially covering the pot as the tomato sauce tends to splatter.  Once the sauce is reduced by 1/2, turn off the heat and stir in the unsalted butter until melted.  Reseason the sauce with a bit more salt if needed.

Cut a deep opening on top of the baguette all the way from one end to the other, without cutting the bottom.  Open the baguette and remove ONLY A LITTLE bit of the bread inside, just enough to make a LITTLE extra room for the filling.  Dice the mozzarella into cubes and lay 1/2 of it evenly inside the baguette.  Sprinkle with a little salt and black pepper.  Spoon all the sauce into the baguette then top with the rest of the mozzarella.  Sprinkle a little bit more salt and black pepper on top, then drizzle the bread with extra virgin olive oil.

Bake in the oven until the cheese is fully melted and the bread is brown and crispy on all sides.

Top with fresh basil leaves and… “slurp” down this soubwich. 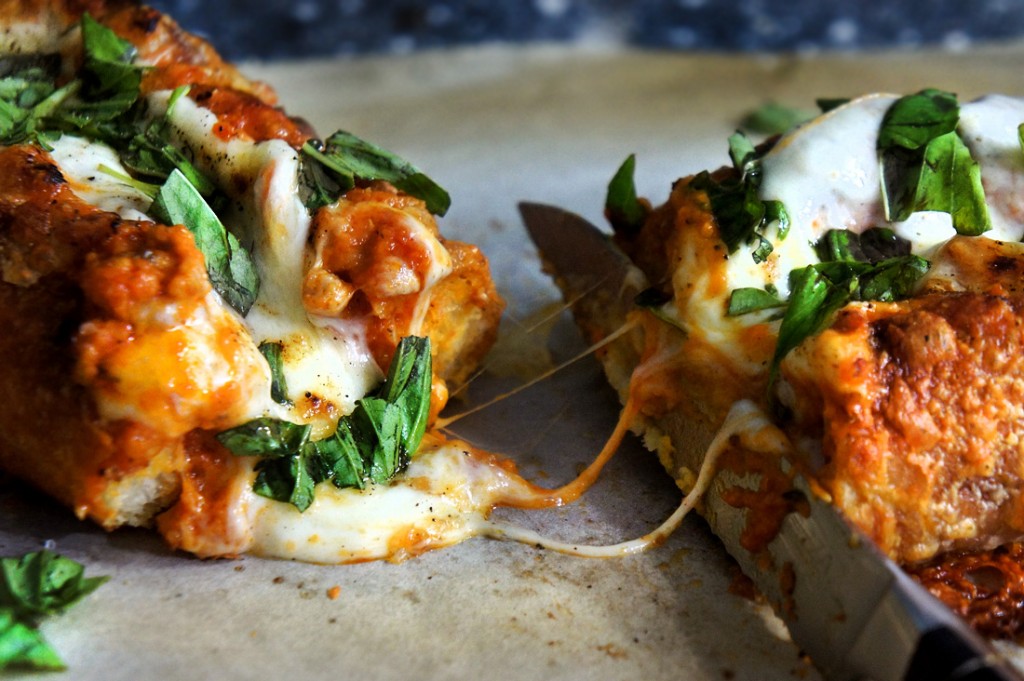