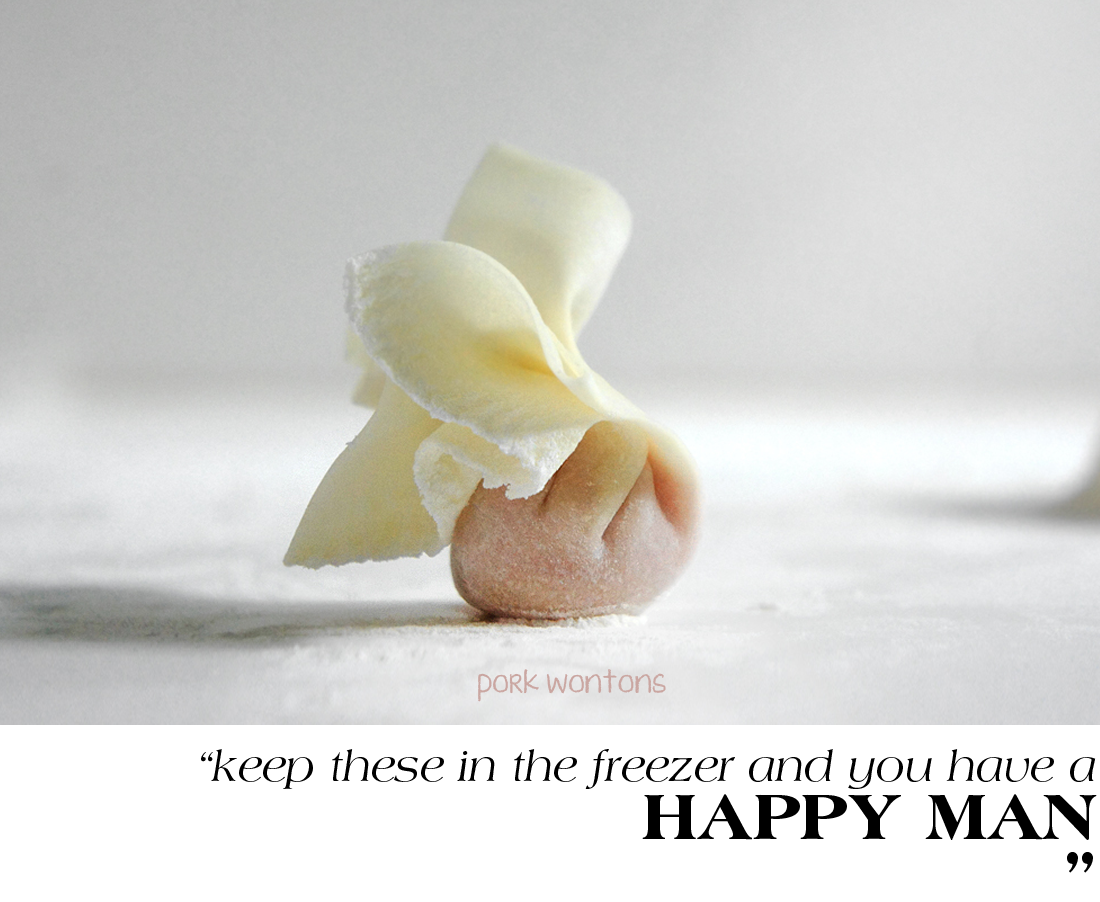 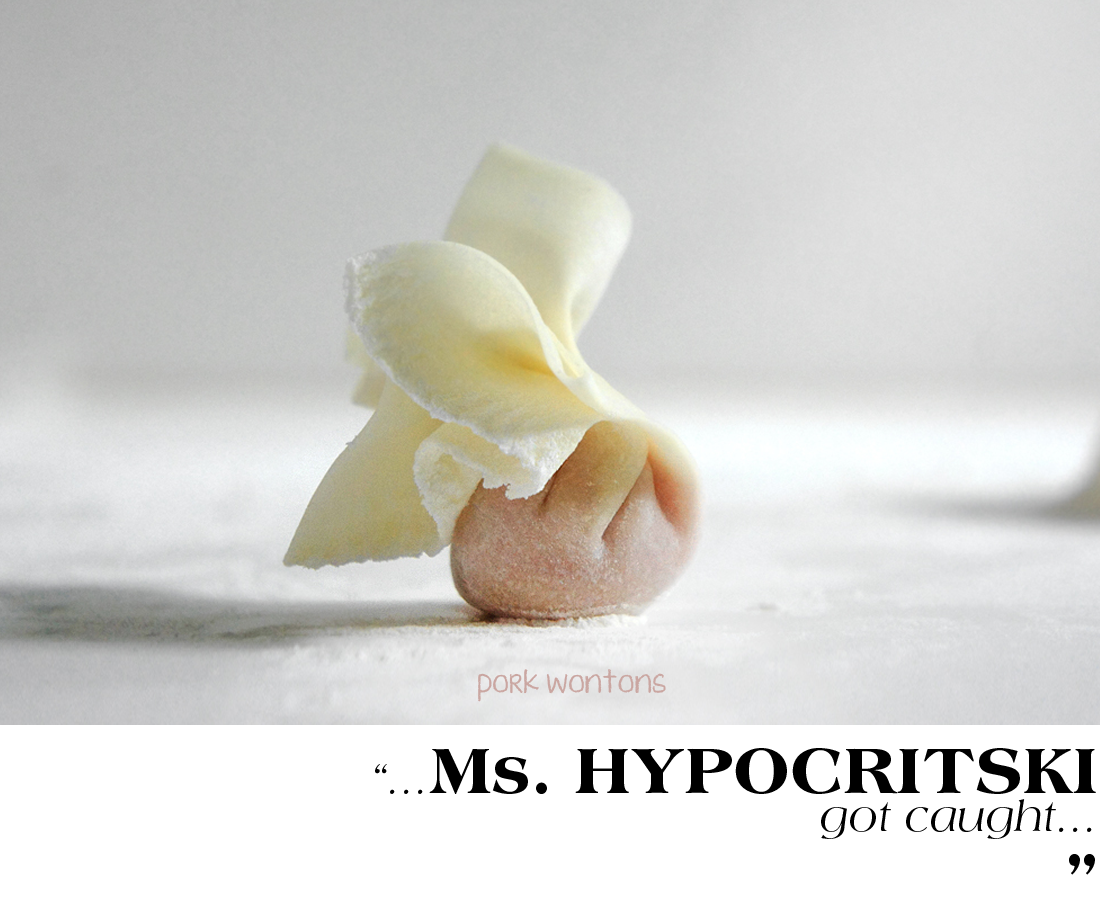 There are about a hundred activities that are on my list of things to AVOID at ALL COST in Beijing.  Taking a cab is one of them.  I’m from New York, the international training-hub for cab-EQ and I thought I graduated smoothly with only one slip that caught me off-guard somewhere on Christopher Street.  So to say that I have NO tolerance for supposedly my favorite transportation in the world, is saying a lot.  If you think New York cab’s got attitude, how about multiplying that by 10 folds then add these to top the cake:  a) The car is built to be as safe as a tin can.  b) Driver tells you that it’s his second day on the job so that he’s completely CLUELESS on the directions OR how to keep you alive for that matter.  c) A thick stench of body odor permeating throughout and you realized only a short stub of screw is left where the window control used to be.  d) It’s 104 degrees outside but the AC doesn’t work (they never do) PLUS the window STILL doesn’t open and YES of course… odor, while you are being dragged aimlessly around the city in a lovely tin can.  See? 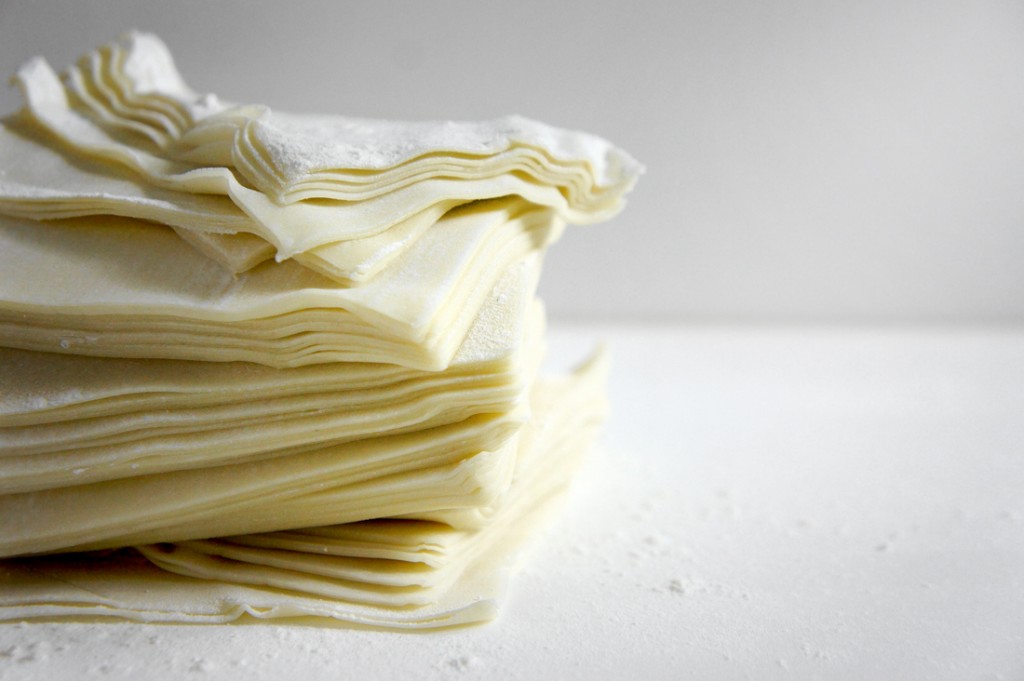 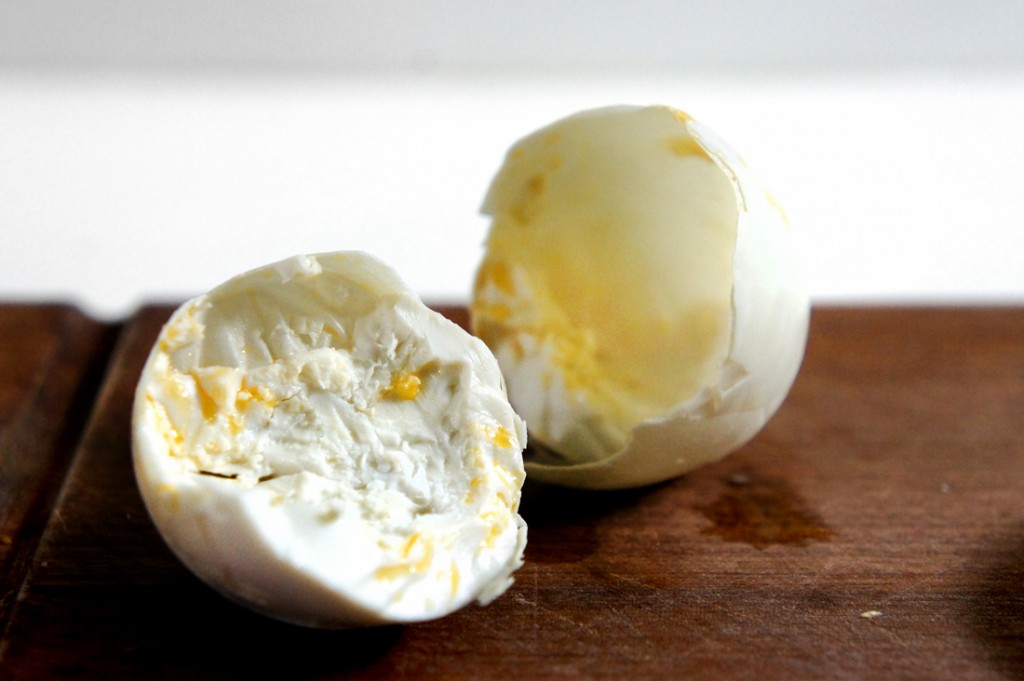 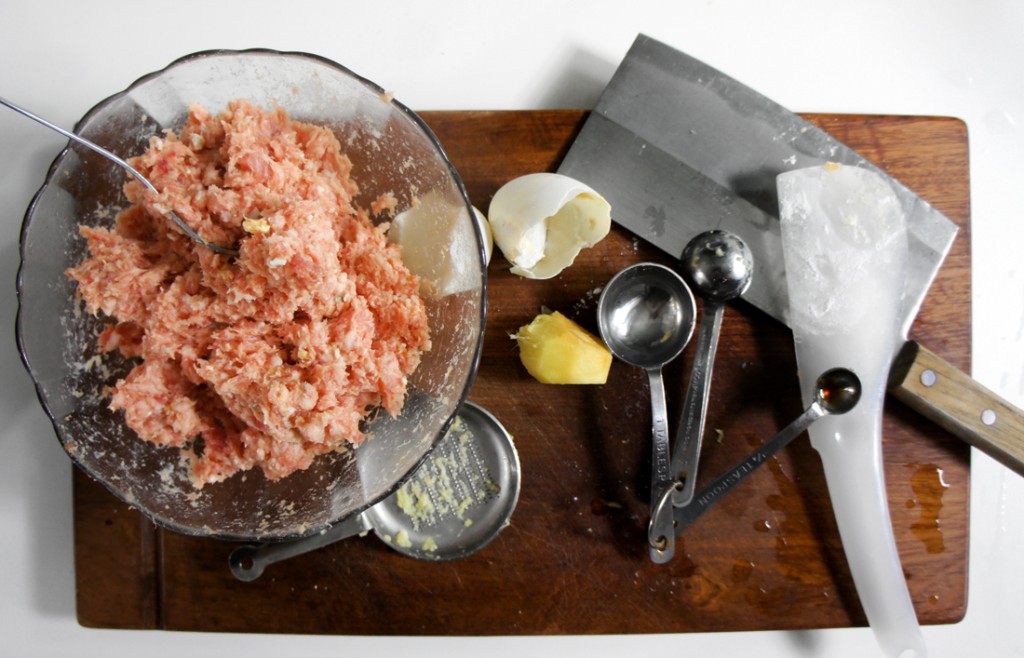 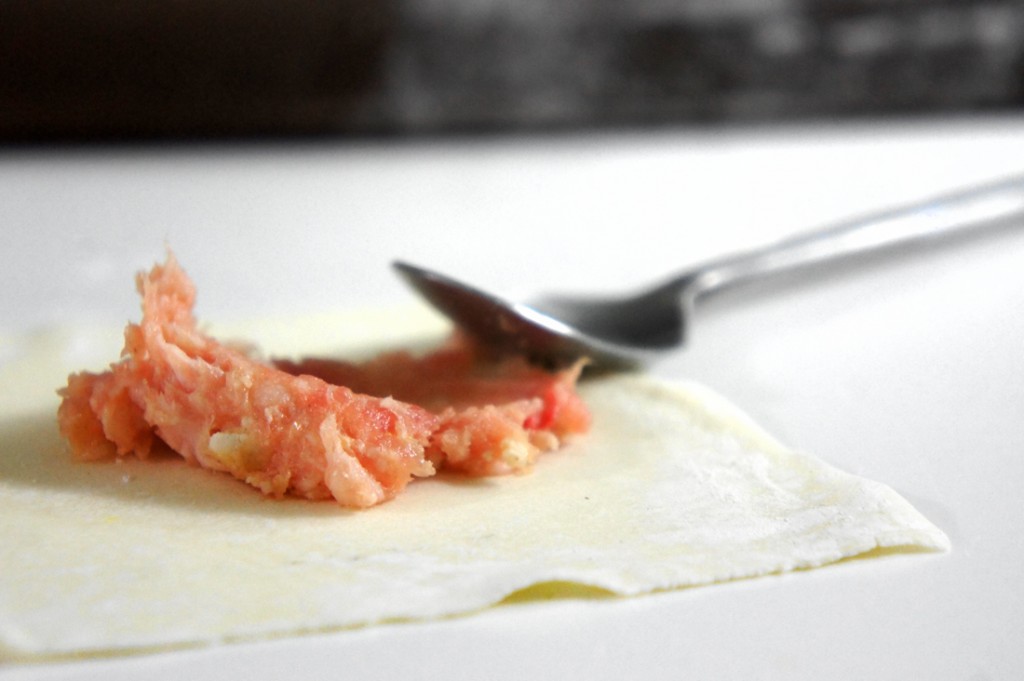 I didn’t love to cook so that some men would love me and I’m definitely not going to be an advocate for this good-wives-can-cook-so-can-you! campaign.  Cooking should always come more as for one’s own enjoyment than for others.  But again, how guilty is it to be “good” as a “wife” to a man who makes you happy, too?  A few days ago I survived the doomsday/dark-ages of internet blackout on my computer that led to two major emotional-meltdowns, all of which so epic that it demands its own post.  Dear Jason were there to hold my hand through the despair and tears, the howling and cursing (mostly at the computer), the slashing and choking (mostly on the old AND new LAN-lines), the anger and resentment (mostly at him) and the self-pity and comfort (mostly for myself).  So as much as I am allergic to the word of “good” and “wife” put together… 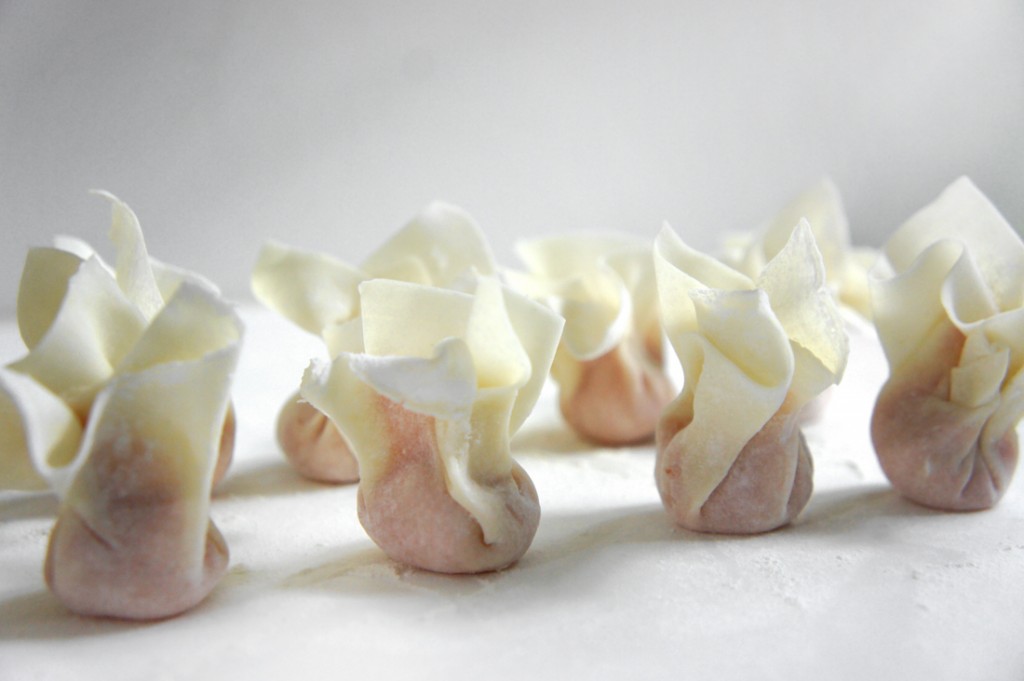 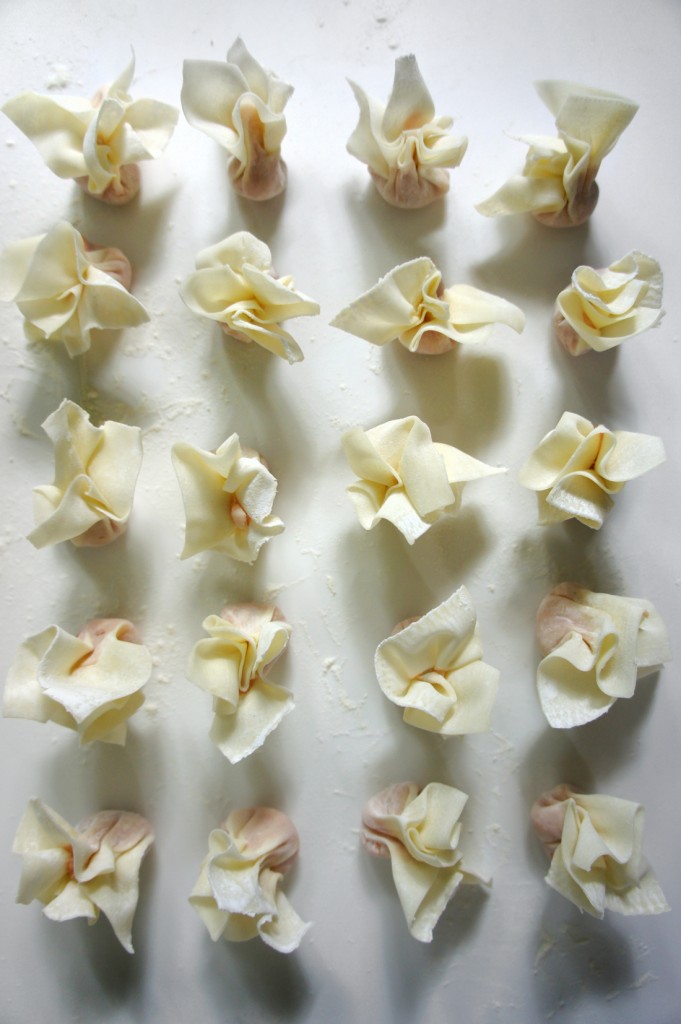 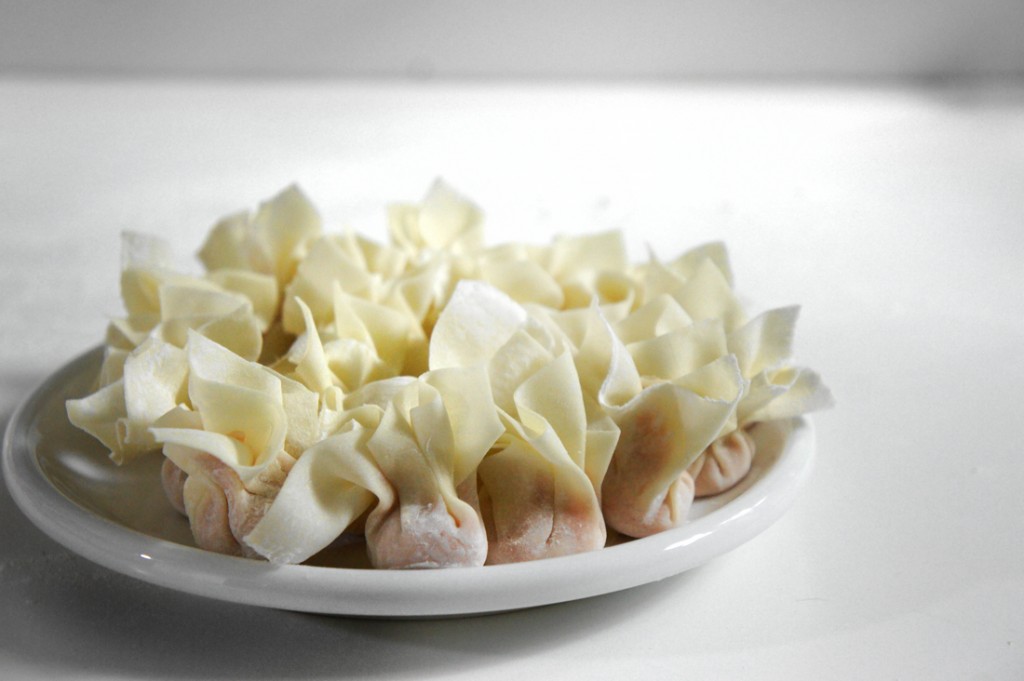 … two day after my released from the Mr. Chatski-hijack, I made a batch of these and kept them in the freezer.  Pork wontons.  They are not dumplings.  They are more like the fetus of a dumpling with much thinner wrapping and much tinier filling that comes in different variations from different regions (such as a yellow wrapping with shrimp filling in Hong Kong but over the years I have decided that a white wrapping with pork filling is the only just way).  They wait patiently in the freezer and cook literally under 1 minute whenever needed, taste just as heavenly and wonderful as the name wonton which means “swallow cloud” because they are exactly light and delicate like that.  I made them… because that whole good-wives-make-dumplings talk reminded me how much Jason loves NOT dumplings, but these – his favorite snacks really, that he would happily devour at any given time of the day especially drenched in a flavor-explosive sauce made of garlic, chili oil and vinegar.  So yes, Ms. Hypocritski got caught red-handed. 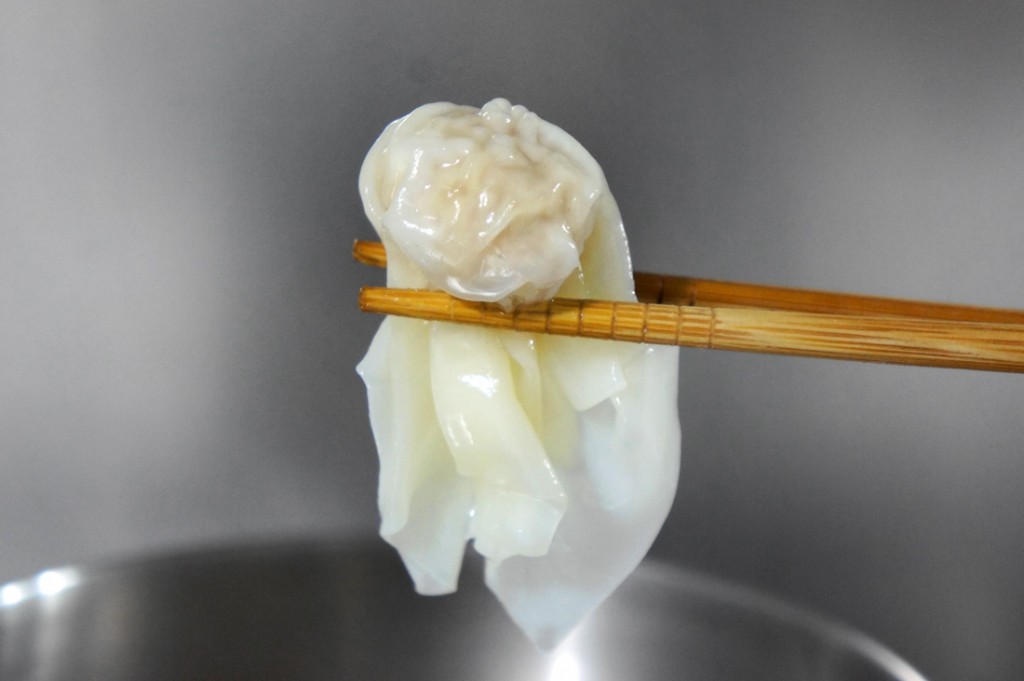 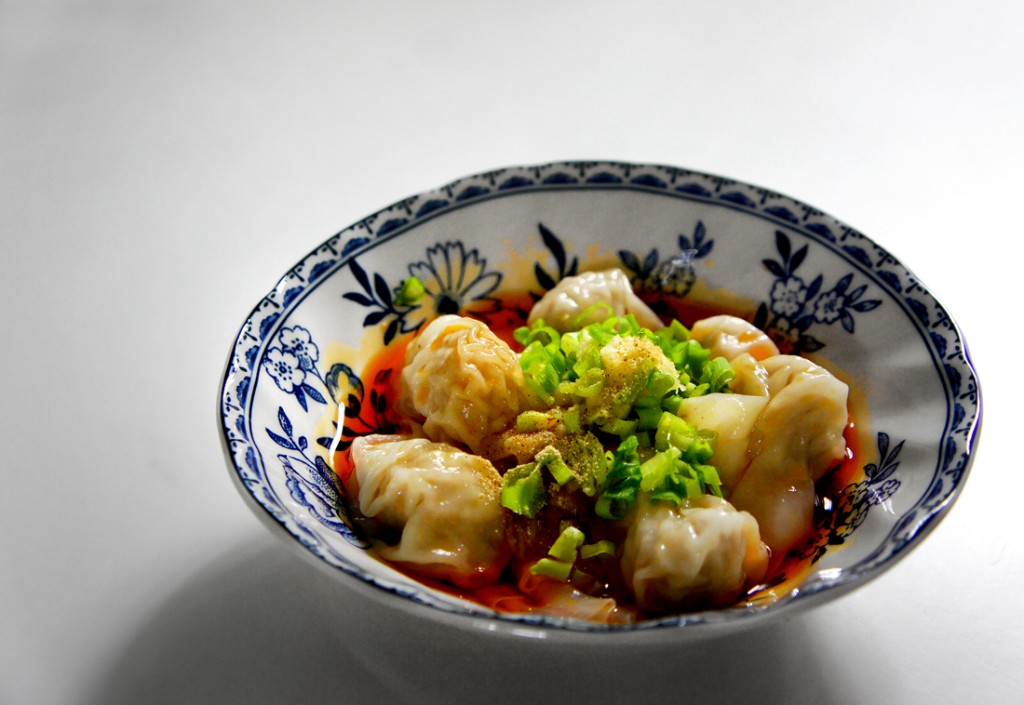 * When buying wonton wrappers, choose the white kind instead of the yellow kind.  The white wrappers are thinner and more delicate.

** Salted duck egg can be bought from Asian markets.  And since Asian condiments made from different brands vary in flavors so widely, I thought I would include a link to the exact brands I am using in the ingredient list.  They should be easily found in Asian/Chinese markets.

*** This sauce is my favorite, but by all means come up with your own favorite combination.  Go wild with extra virgin olive oil and shaved parmigiano, then sprinkle with chives.

Half the duck egg and scoop out everything (egg white + egg yolk) from 1 side, and JUST the yolk on the other.  Add the duck egg, ground pork, grated ginger, sesame oil, dashi granules, ground white pepper, corn starch, salt and soy sauce in a food processor bowl.  Pulse until everything comes together evenly, and that there are NO large chunks of duck egg left in the meat.  Move everything into a bowl and set aside.

Unpack the wonton wrapper and cover with a plastic wrap to prevent drying.  Lightly dust the working surface with flour.

Take 1 sheet of wonton wrapper, then use the back of a small spoon to SMEAR approx 1/2 tsp of filling onto the wrapper.  Dab the filling with a bit of water then pull the wrapper together and PINCH lightly at the middle to close it up.  When you pinch, pause for a few seconds to give the wrapper time to stick to the fillings, but DON’T squeeze too hard or you’ll break the wrapper.  Keep repeating these steps until you have enough wontons to fill a small tray or plate.  Lightly dust the tray/plate with flour and place the wontons on top, then put it into the freezer.  Work your next batch and freeze them on another plate.

To cook, bring a pot of water to boil with a pinch of salt.  Meanwhile, mix chili oil, soy sauce, dark Asian vinegar, rice vinegar, ground white pepper, ground sichuan peppercorn and dashi granules in a bowl, and set aside.

Slowly drop 8 wontons into the water and give them a little stir to prevent sticking.  Keep the water at simmering and cook until they float to the top of the water, approx 1~2 min.

Remove the wontons with a slotted spoon and add them to the sauce.  Top with chopped cilantro and grated garlic, and a little squeeze of lemon.

Stir it up and SLURP!  They will make you happy, men or women alike… 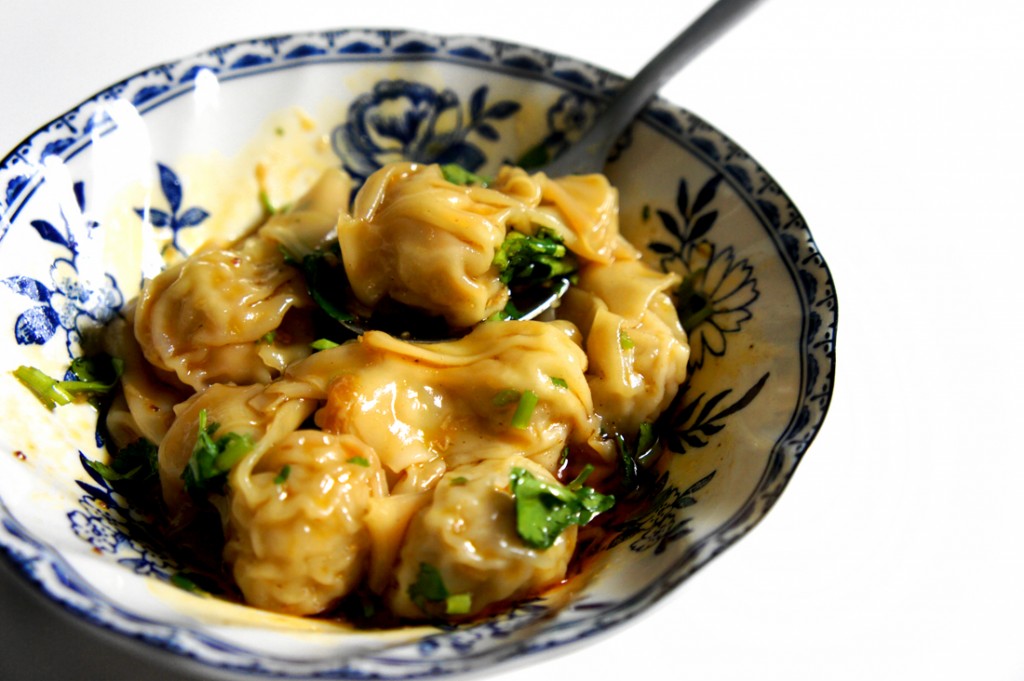