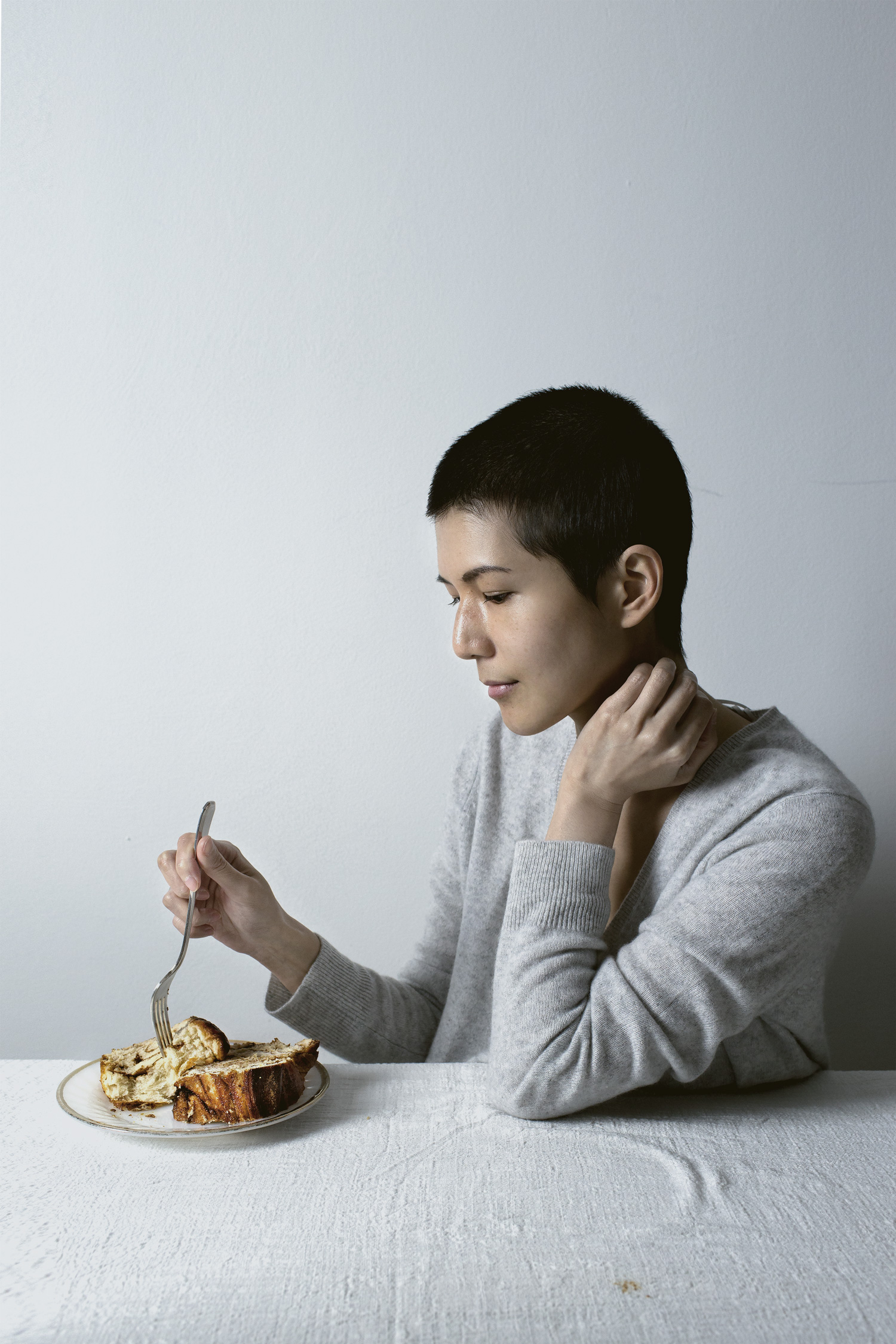 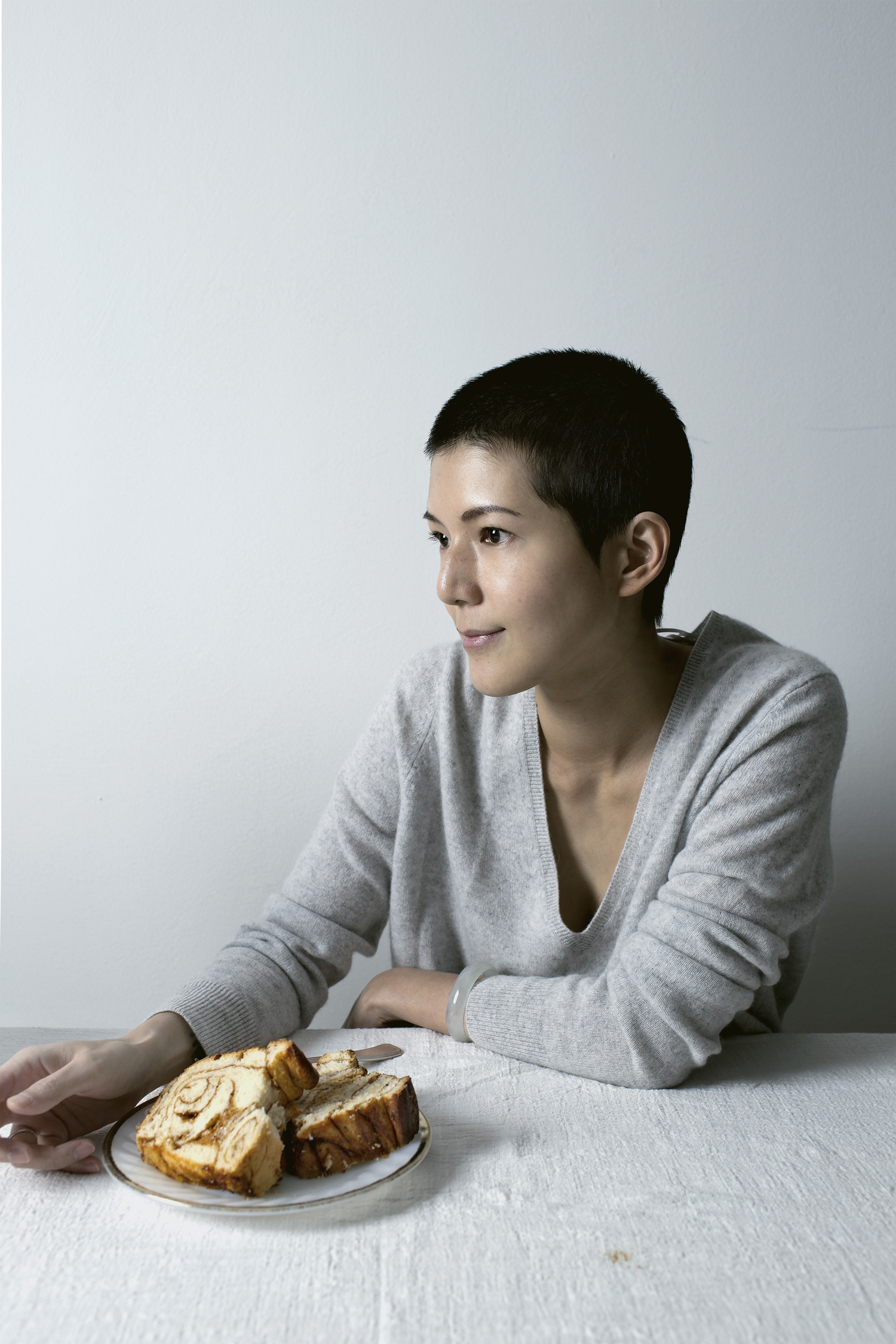 LIFE IS A GREAT ADVENTURE… ACCEPT IT IN SUCH A SPIRIT

Wait, right, fine.  Technically, not yet.

I just buzzed my hair off.  Why?

Before you say it, this is not a Britney-style meltdown.  Okay?

This is Jarhead.  It’s war, and the enemy must be eliminated.  But the enemy in this case – is myself.  If you’re still interested, read on.

But before I start, I just want to apologize for making such a fuss in the past two weeks, sounding alarmingly distressed and melodramatic.  That was me then.  That is not me right now, as we speak.  Now, in hindsight, even the idea of making a public display of my buzz feels acutely self-absorbed if not stupid, but having said that, I still owe you an explanation.  So please know that whatever you read off of this, that it is in the context about hair, the nerve-less fibers that grow in ways without or without our consent and sometimes utter rudely.  So if I sound like I’m being superficial anywhere in the story, I may have been.  Well, here we go. 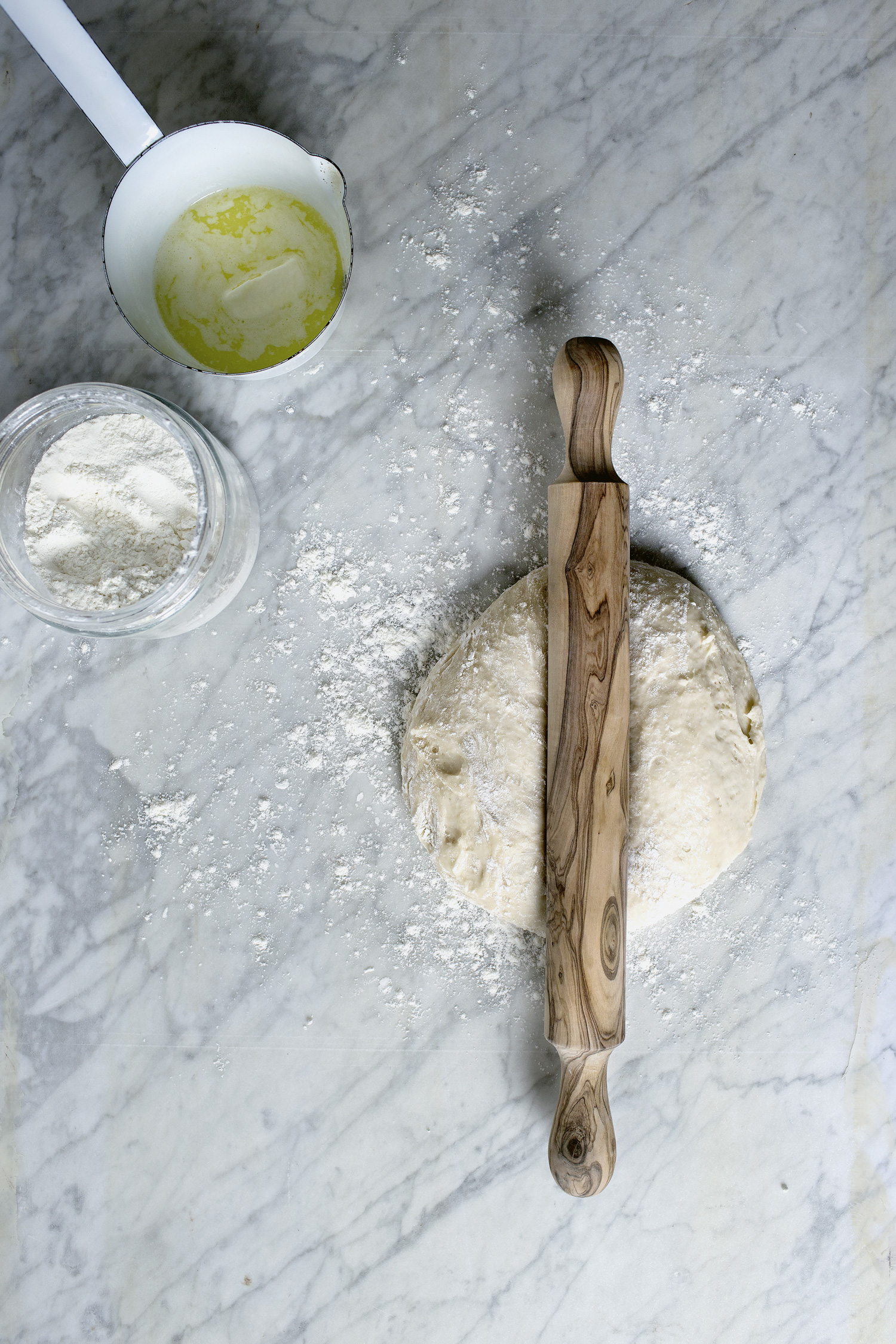 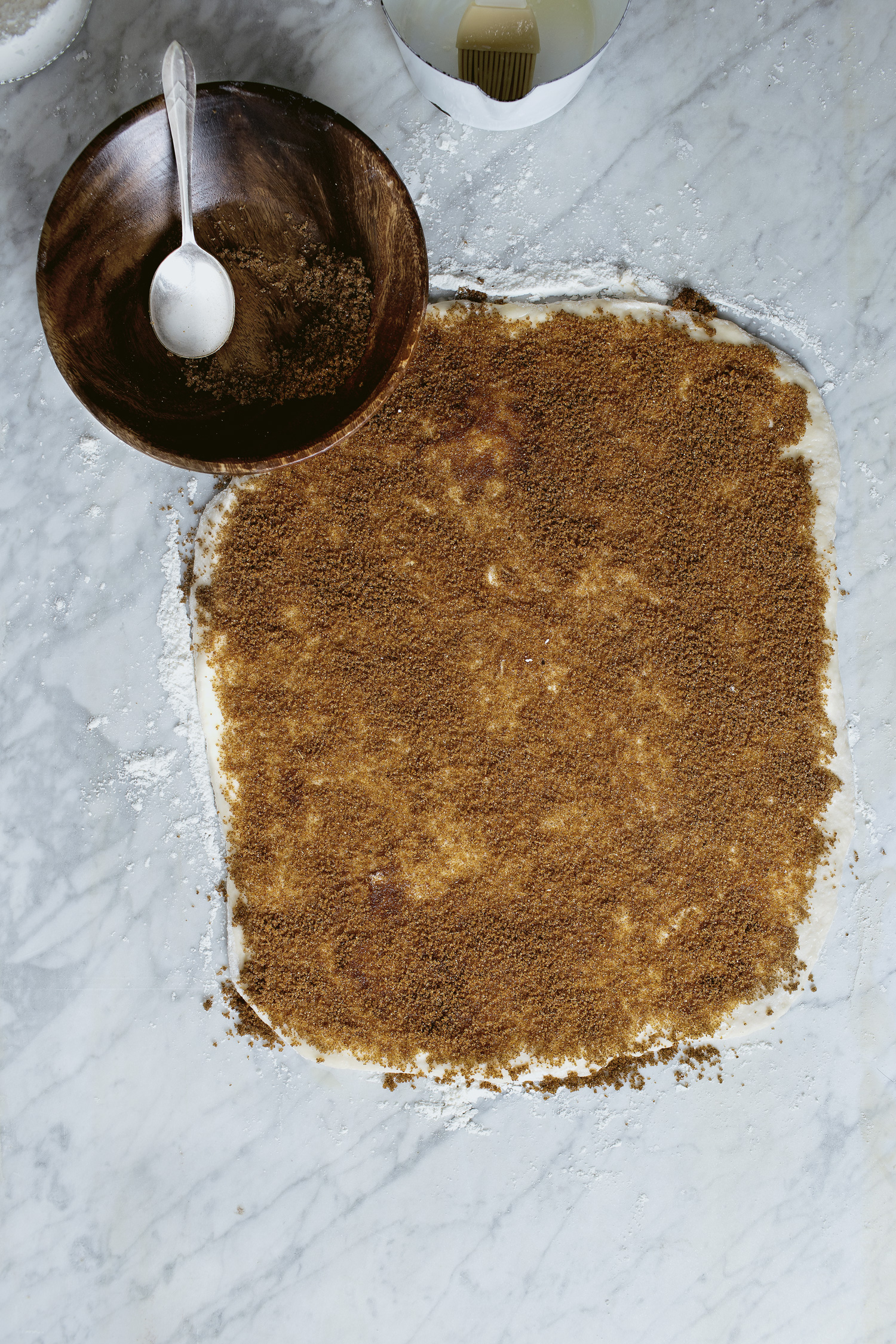 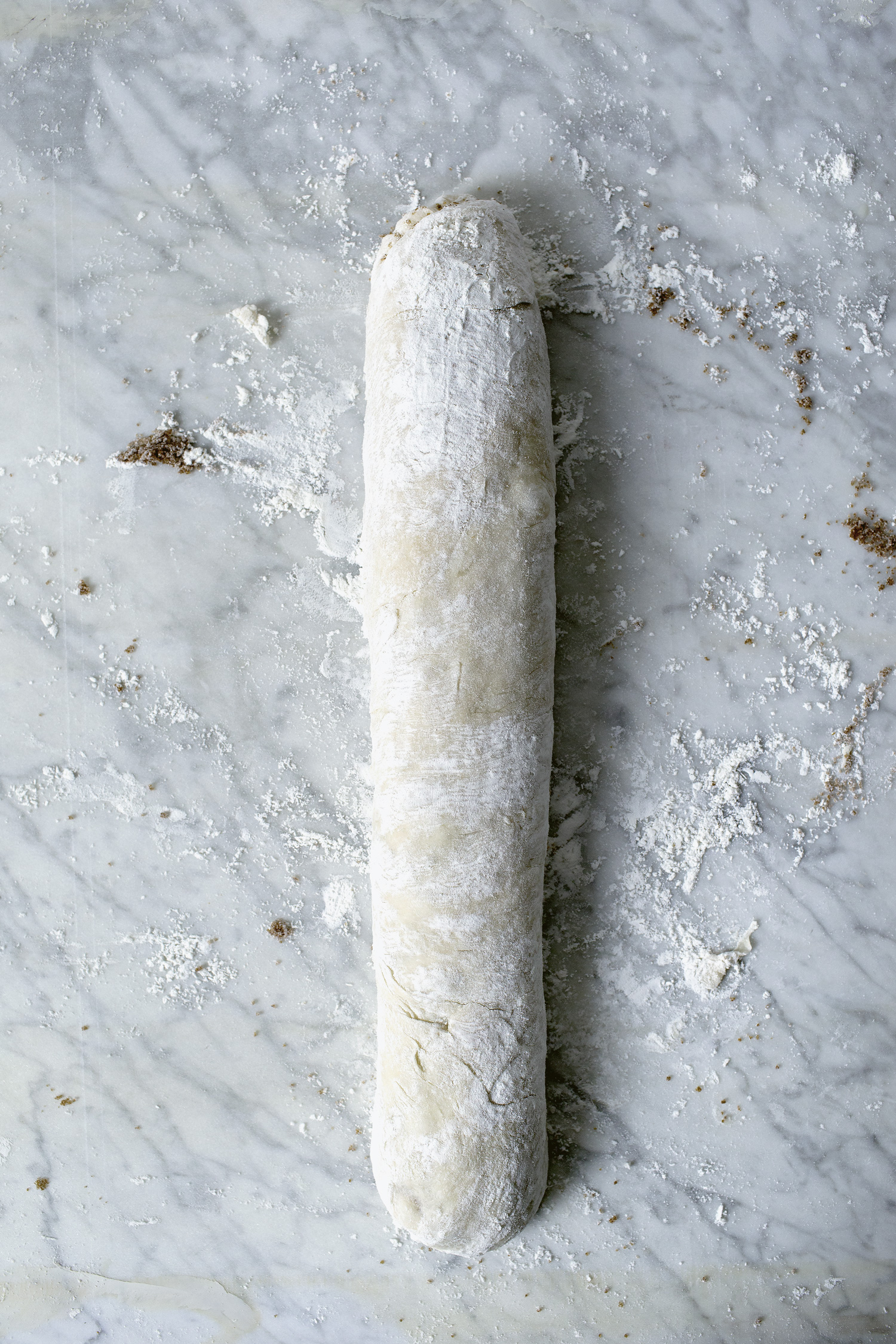 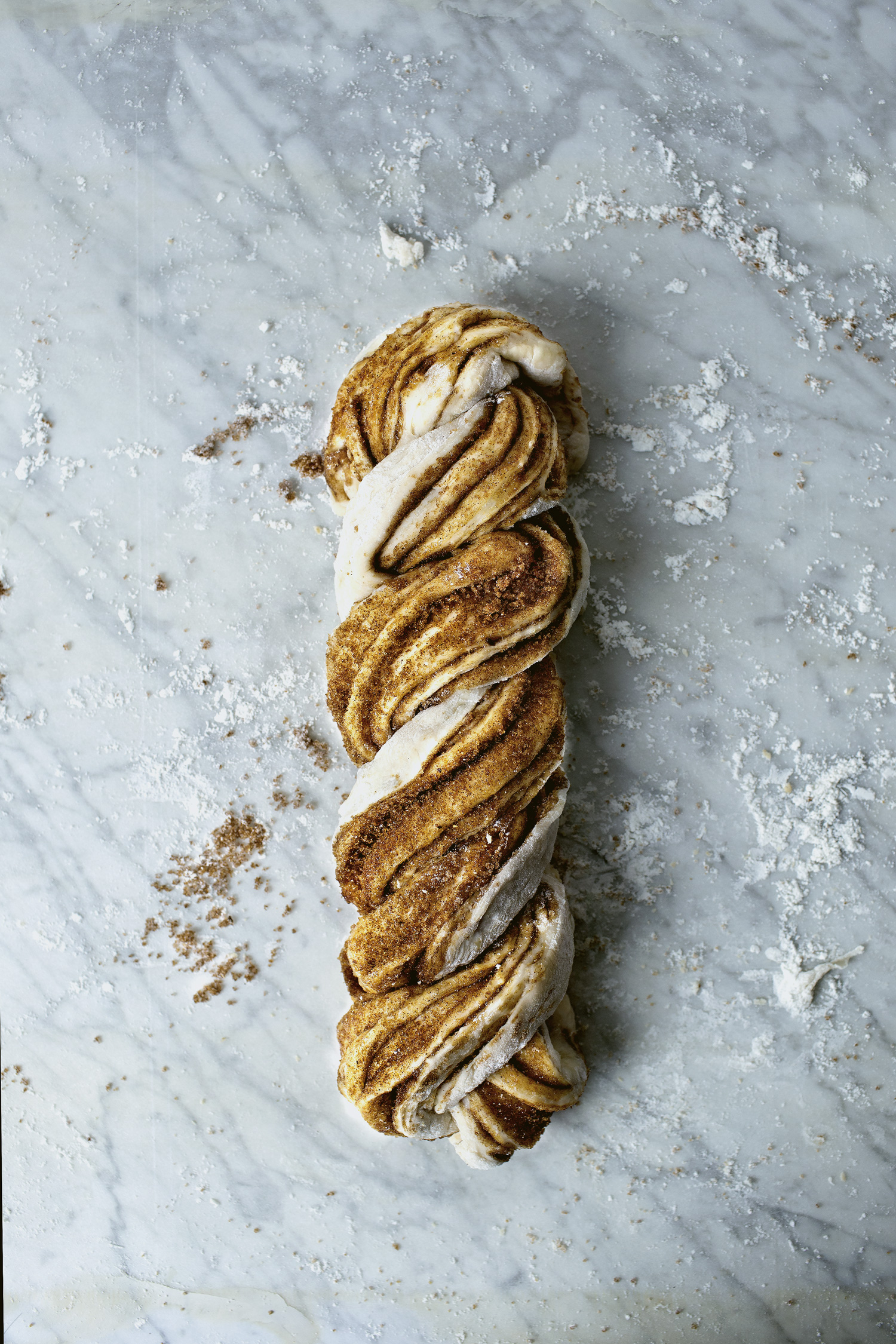 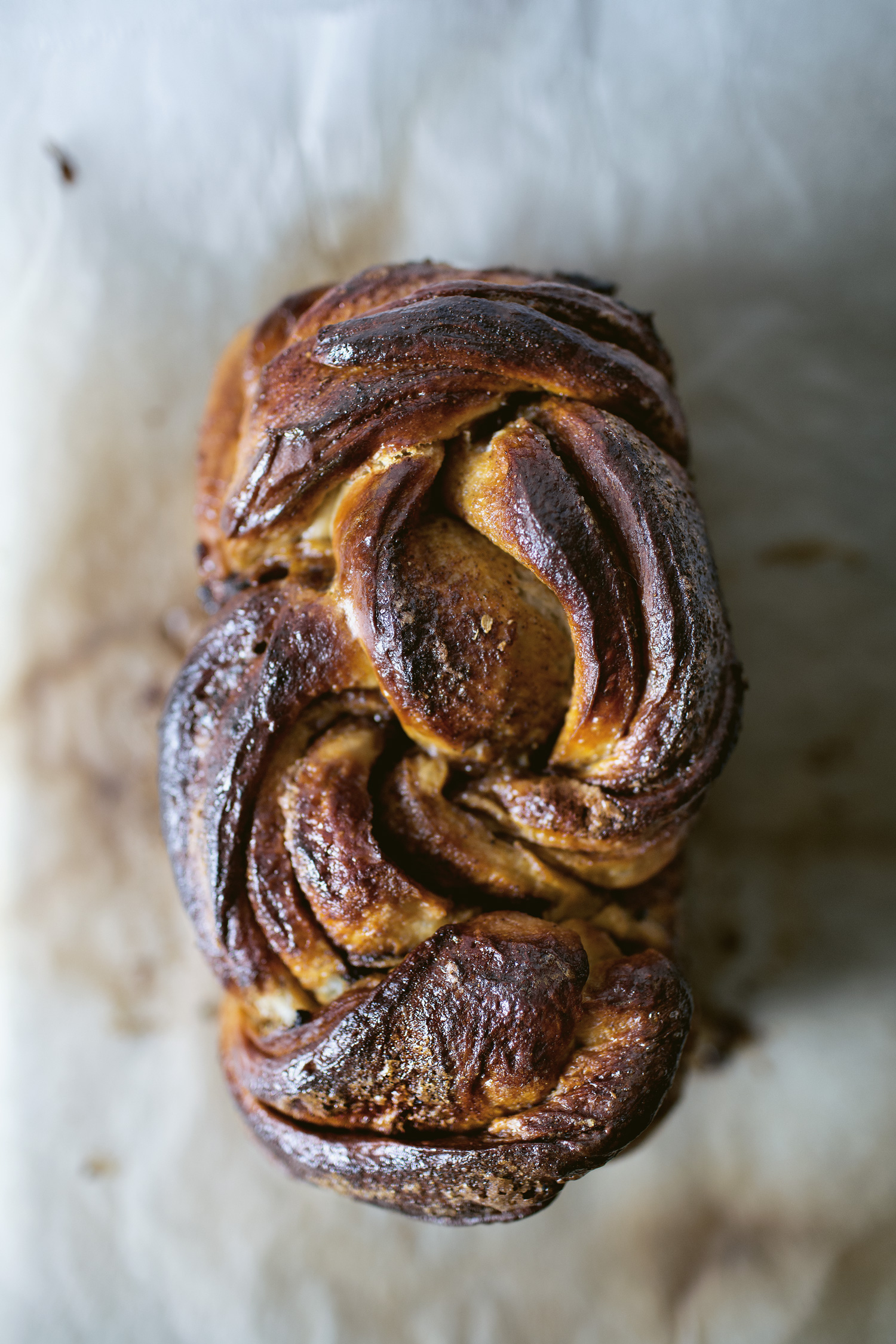 I guess, the whole thing began when my dog-son Dumpling passed away about twelve months ago.  I always knew such event was going to be big, like never-forget-it big, like scar-big.  But I never could foresee the events that it triggered.  In exactly 2 months after the heartbreak, my hair started to fall out in abnormal quantity.  I didn’t pay much attention to it then because after all, I was on a rebound-vacation in europe and I wasn’t gonna let anything distract me from cheap Jamón ibérico.  But in January, after I returned to my then-home Beijing and resumed to my lovely, hypochondriac self, it cook no time to secure my upmost attention along with three dermatologist’s appointments.  Of course, after a couple of blood test on iron deficiency and thyroid functions, all of them assured me that it was just an episode of TE, a temporary hair-shedding followed by traumatic events, then sent me home to rekindle with hairs caught in the shower drainage.

To be honest, and I must clarify, the shedding wasn’t that bad or noticeable to others.  What was really bothering me, pinning me down to the ground and halting my enthusiasms in all aspects of life, was this ghost-like pain on the upper part of my scalp.  Ah yes… the pain.  This burning, prickling, hypersensitive and maddening pain.  It wasn’t “excruciating”, no, wasn’t severe enough to fiddle with any doctor’s curiosity except for my own sanity, and it wasn’t constant either, drifting in and out, sometimes lasting for days then gone, but only to return at any signs of good spirits then snipped them in the buds.  It wasn’t the source of my distress.  That would be vanity.  After all, it was hair.  But it made overcoming my fear that much harder.  It disallowed me to forget, to stop obsessing.  It’s hard to admit, but it crippled me.  It rubbed my face down close to the shame of depression.  I never knew it was that easy.

Informations, for better or worse, are abundant nowadays.  I Googled the shit out of this.

As if obsession wasn’t enough, I threw in my best pessimism for good measure, and fixated on the worst case scenario in the long list of suspects.  Something called, scarring alopecia.  It’s an autoimmune condition without cure or known cause, triggering the body to attack on its own hair follicles, resulting in permanent hair loss in affected areas.  The only definitive diagnosis is made by surgical scalp biopsy.  It’s rare.  It’s brutal.  It’s super depressing.  It’s right up my alley.  I must had it.  Yes.  That was it.

Except, not a single trained professional agreed.

No matter.  In late March, after we moved back to Hong kong, it was like a heavenly door opening to a frontier of brand new doctors.  I was like a kid in the candy store.  I scouted around town and hunted down two more dermatologists and held them hostages, forcing them to draw my bloods.  Both blood tests, one on zinc, and another one on more severe autoimmune diseases (such as lupus) came back negative (scarring alopecia does not show up in blood tests).  Needless to say, none of the doctors recommended, one of them plainly discarded, the prospect of a biopsy.  I don’t blame them, because truth was, I did not (still don’t) resemble any clinical signs of scarring alopecia, the patchy, angry and visibly inflamed scalp, the real hairs in need.  Instead, my diffuse and not-so-obvious thinning suggested derangement.  Even the pain, my only ally, proved to be undependable to show up on time during appointments.

So another five months passed.  I mastered meditation and was about to call it a year.  But another obsessing opportunity came up where Kitchenaid invited me to New York – the base camp of SEAL Team 6 of medical elites – to celebrate their new mini mixer, and little did they know, I took another dermatologist as collateral damage.  But this time, it was different.  The specialist I saw reignited my belief that I had this condition.  He told me that he had seen a patient in my suspected case and suggested that I do a biopsy by a student of his in Taiwan (because I wasn’t going to stay in New York).  Three weeks later, quarter inch deep and two stitches wide, I did.  And in another two weeks, the result came back positive.  I have scarring alopecia.

It was… a surreal moment I must say.  What does it mean?  In an ironic sense, my body does not agree with my hair.  Not that I blame it.  The funny furs along my hairline have never listened.  But without cure and only a managing regiment involving potent steroids, will I eventually lose most of my hair?  Or all of it?  Or not that much of it?  When?  Slowly?  Or not so slowly?

Strangely, the suspicion of this condition haunted me mercilessly for almost 11 months, but the reality of which, only took me two weeks to let go.  I found out on November 9th.  Yes that’s right, that same day, in fact, on exactly 3:30 am EST.  POW-POW!  Back to back, so don’t say I wasn’t strong.  Then I spent the first day in the denial stage, another two days in the bargaining stage, then allowed myself to cry for about thirty minutes after which, I officially had it with myself.

What was I so scared of?  Being bald?  OK, well, yes, it sucks, but instead of spending the next months, or years!, my precious time on earth in fear of a suggested outcome, fuck it.  I was tired of being scared.  I’ve got a life to live, sea urchins, travelings, autumn breezes, puppies!  This… black humor, however powerful, was a mere distraction, and had to be addressed as such.  Laugh and release.  And I did it the only way I knew how.

A few days later, I buzzed it all off.

Ok, I know that you’re probably thinking, What the fuck.  You’re not bald.  I know I don’t look it.  Yet.  But I might, or probably will, and it doesn’t matter.  And that’s the point.

Ironically, I never felt compelled to post my photos online while I still had a full head of hair.  It makes me cringe.  I mean it still does, evident from my inability to look into the camera and the awkwardly fake smiles.  But now, there is something, however puny or important you want to make of it, that I want to say, even if it’s just a note to myself.  That the weight of this entire ordeal shifted from crushingly heavy to feathery light almost overnight.  What’s changed?  Nothing.  It only mattered because I let it mattered.  I’m not trying to underplay the impact of this condition if anyone who is suffering from it is reading.  It sucks.  It does.  But I am trying to say, that no matter what comes to life, both happiness and sadness is only a perceived reality.  It isn’t anything anyone else can touch.  It isn’t concrete.  It isn’t even real.  Except in here, a figment in our minds.  Its only power over us, is the one that we grant it.  It is up to us, a choice, which one it’s gonna be.

Or angry, or glad, or ambitious, or contented, or closed, or embracing, as long as you know that you choose it.  That you can.

I’m not sure what you could take away from this, hopefully not that the worst things could happen, that Donald Trump could be the president of United States or that you could be bald by 40 despite your best judgement.  No, not saying that.  And if nothing at all, then I’m simply updating my friend, you, about what’s up.

And if nothing at all, what you should take away from this, is a twisted loaf of mochi bread babka stuffed with Christmas-spiced brown sugar.

Life can be a bitch sometimes.  But it’s also beautiful. 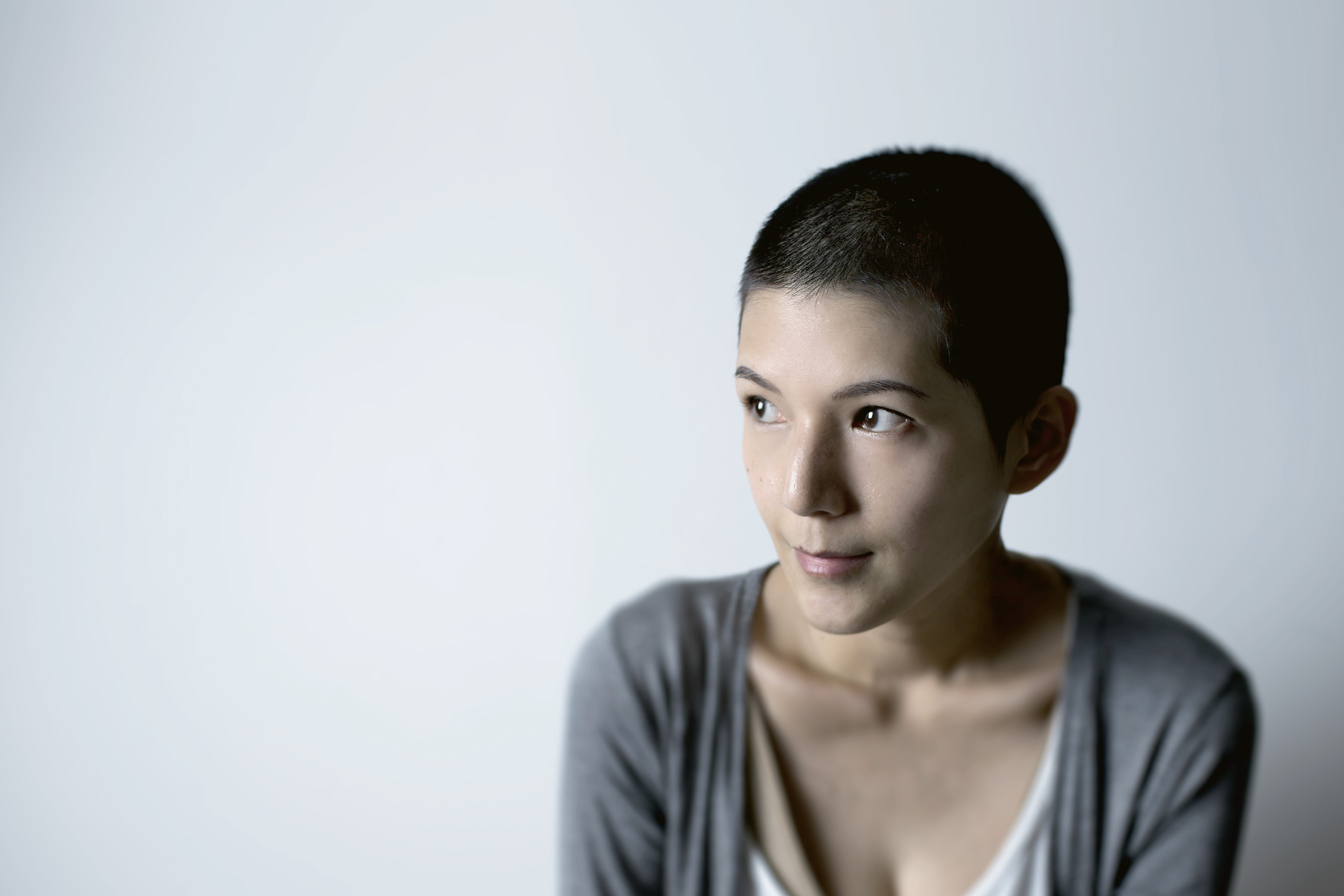 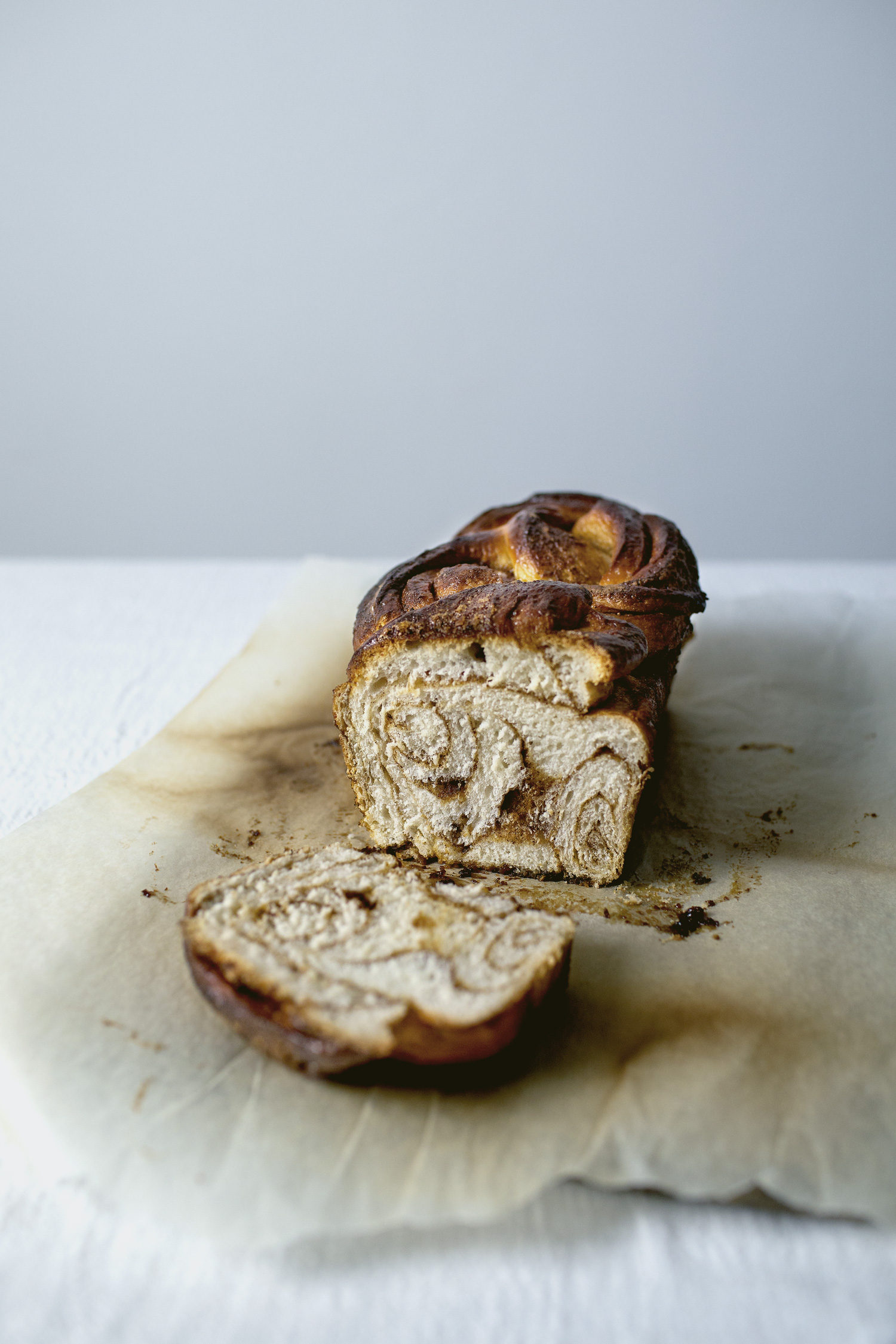 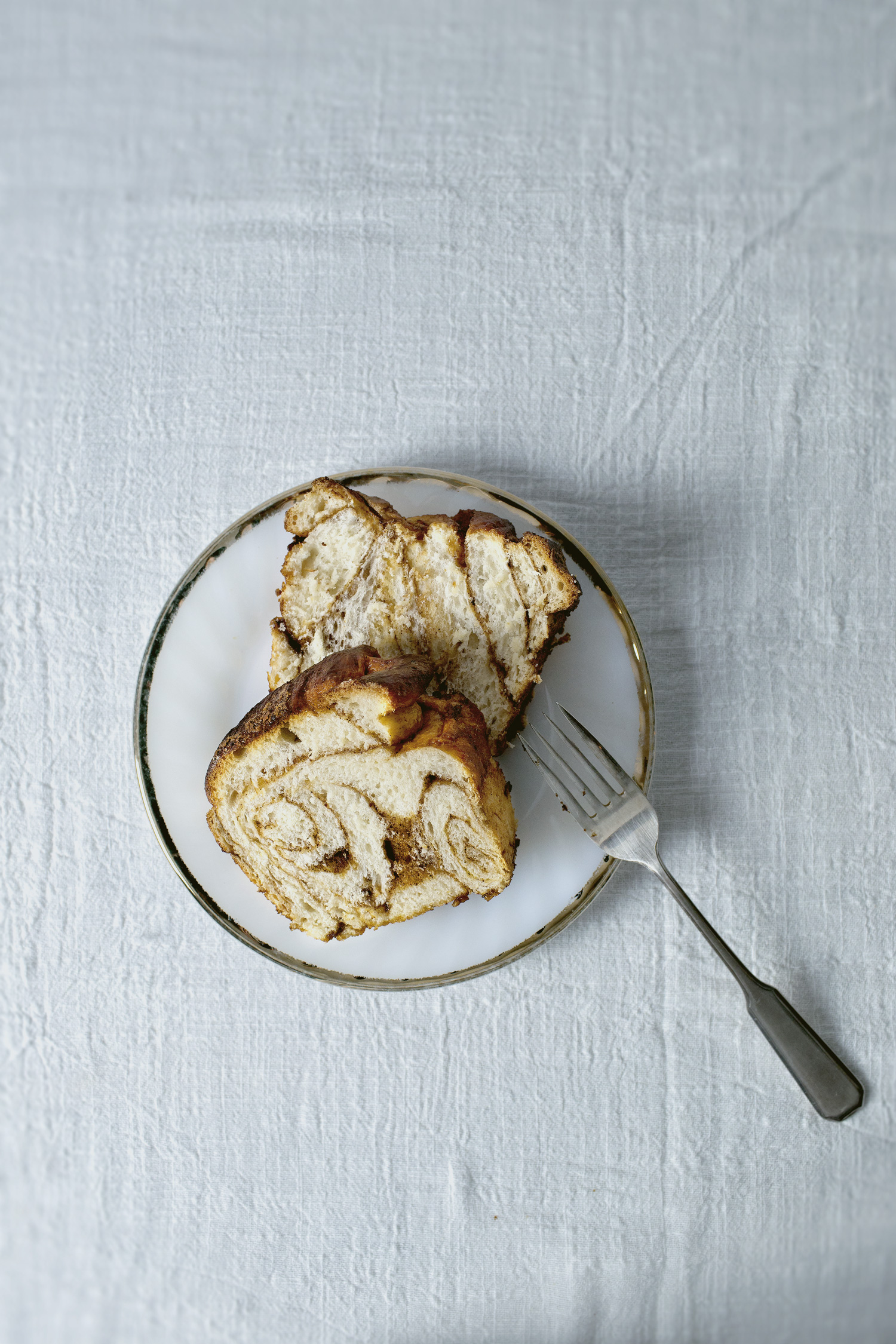 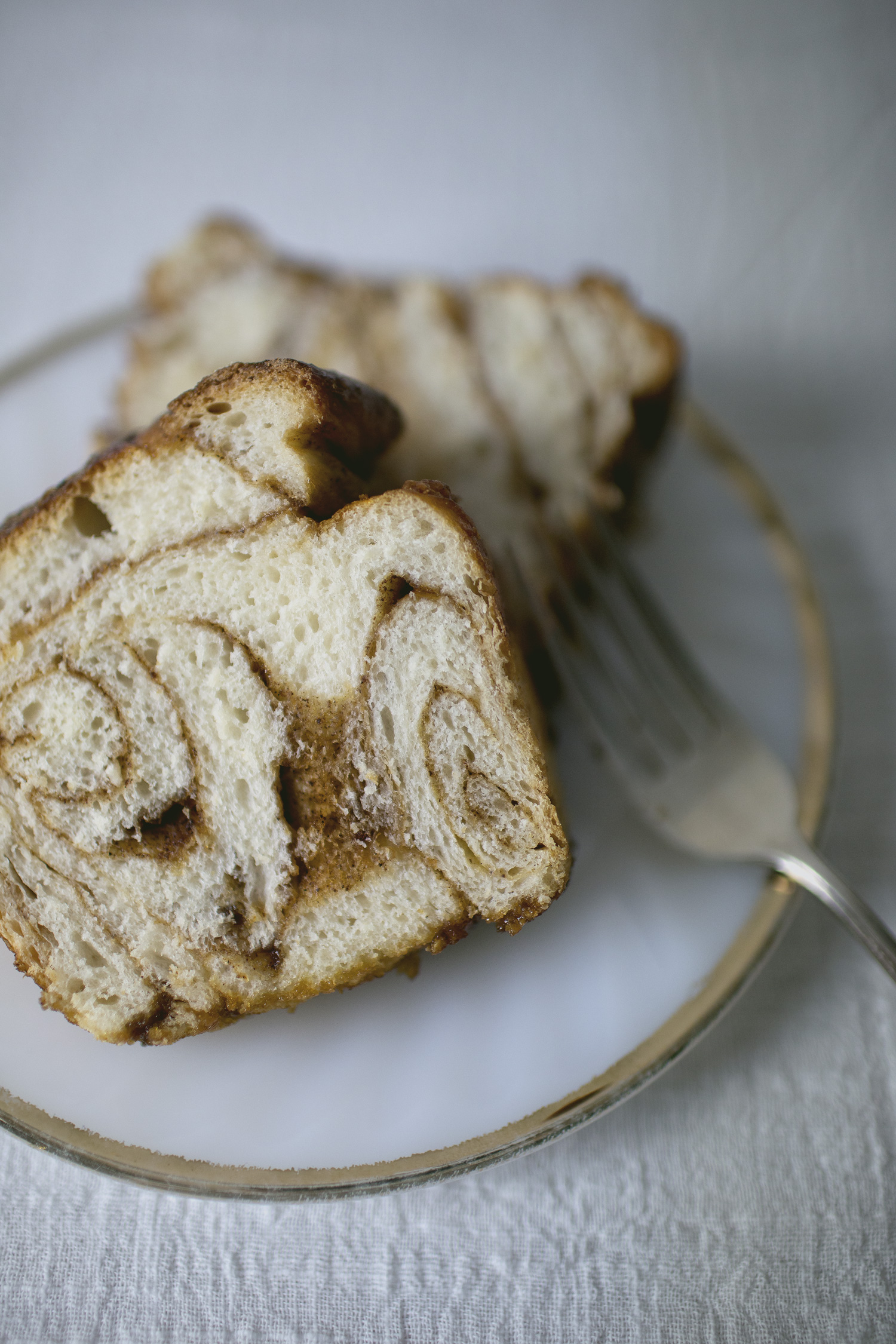 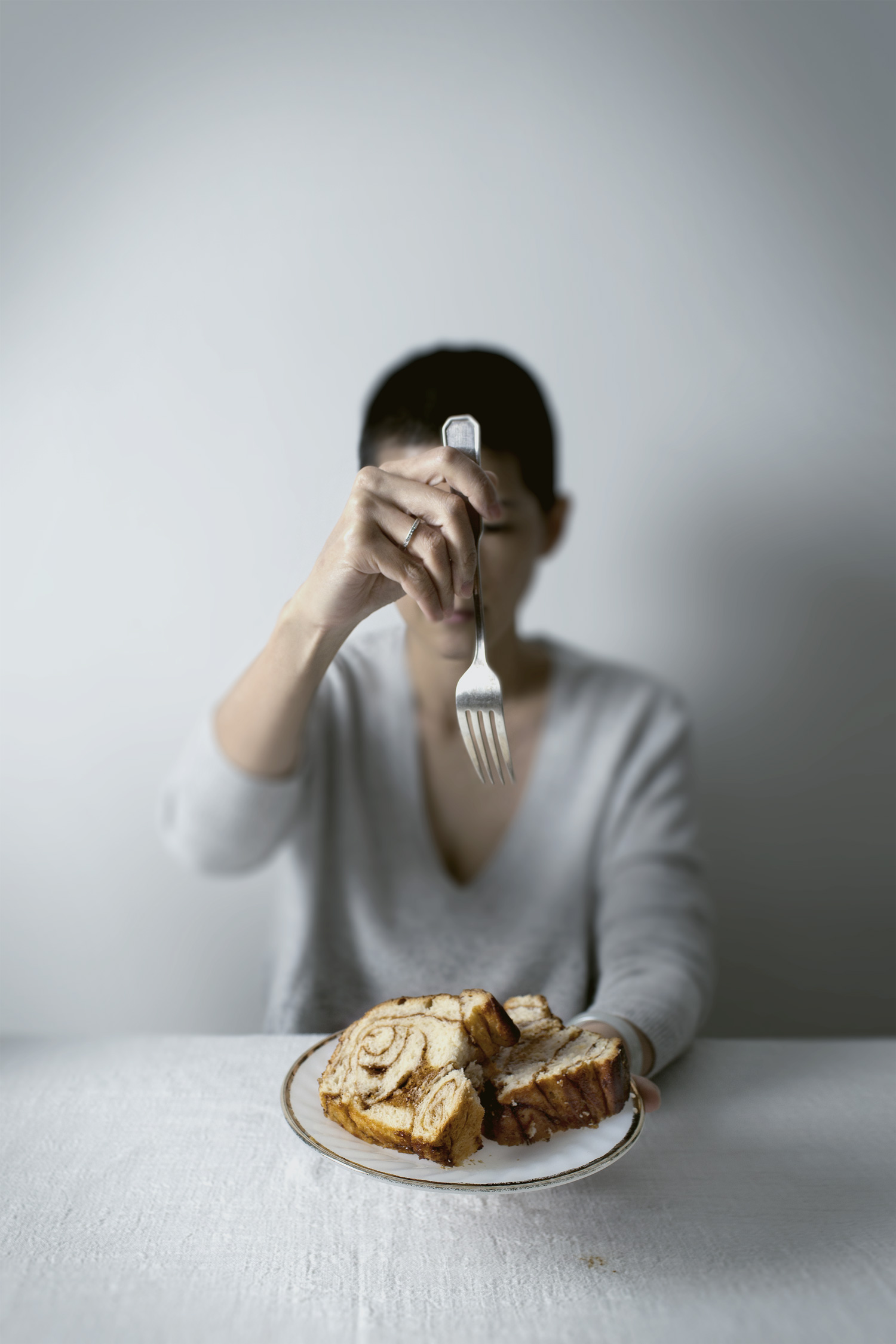 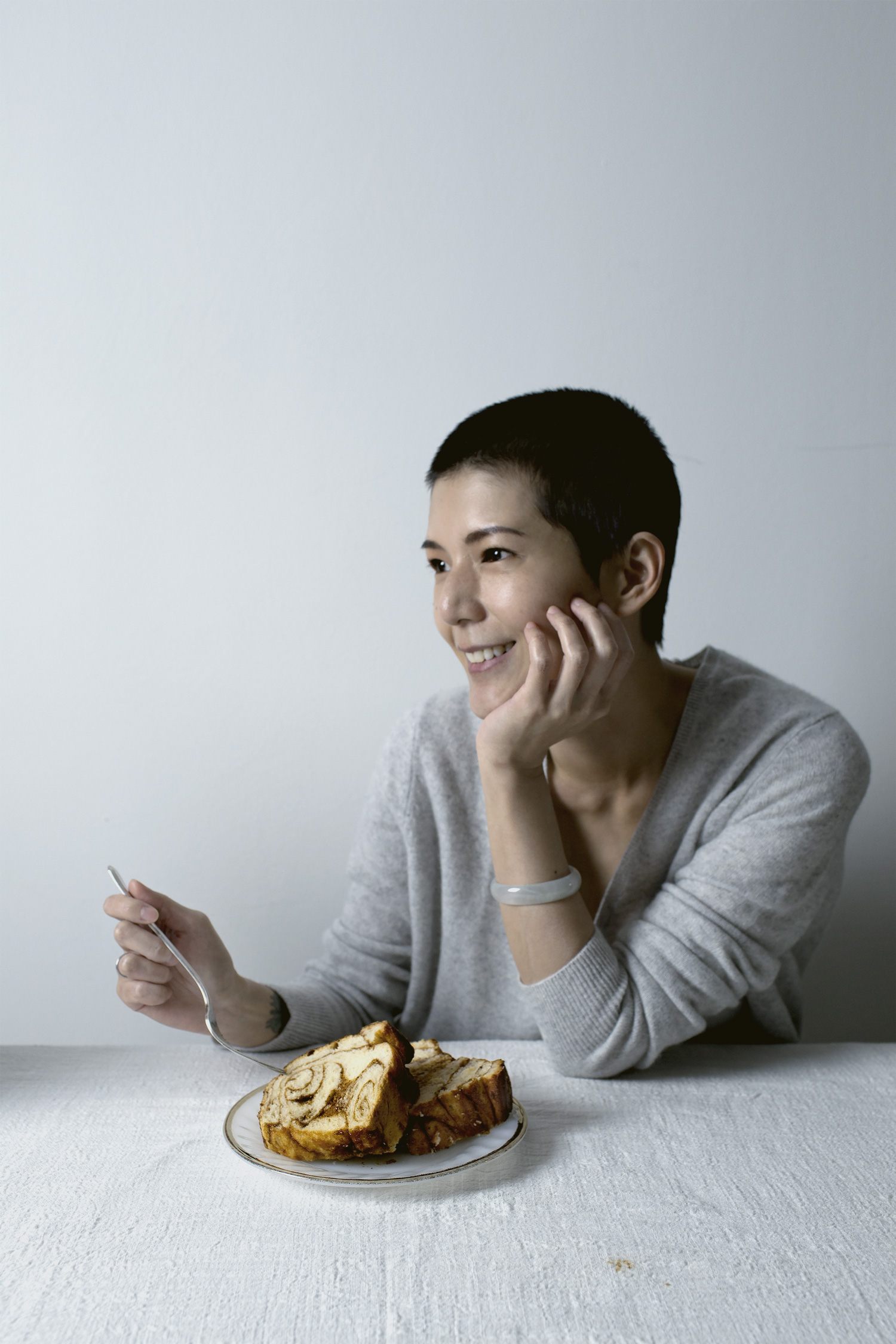 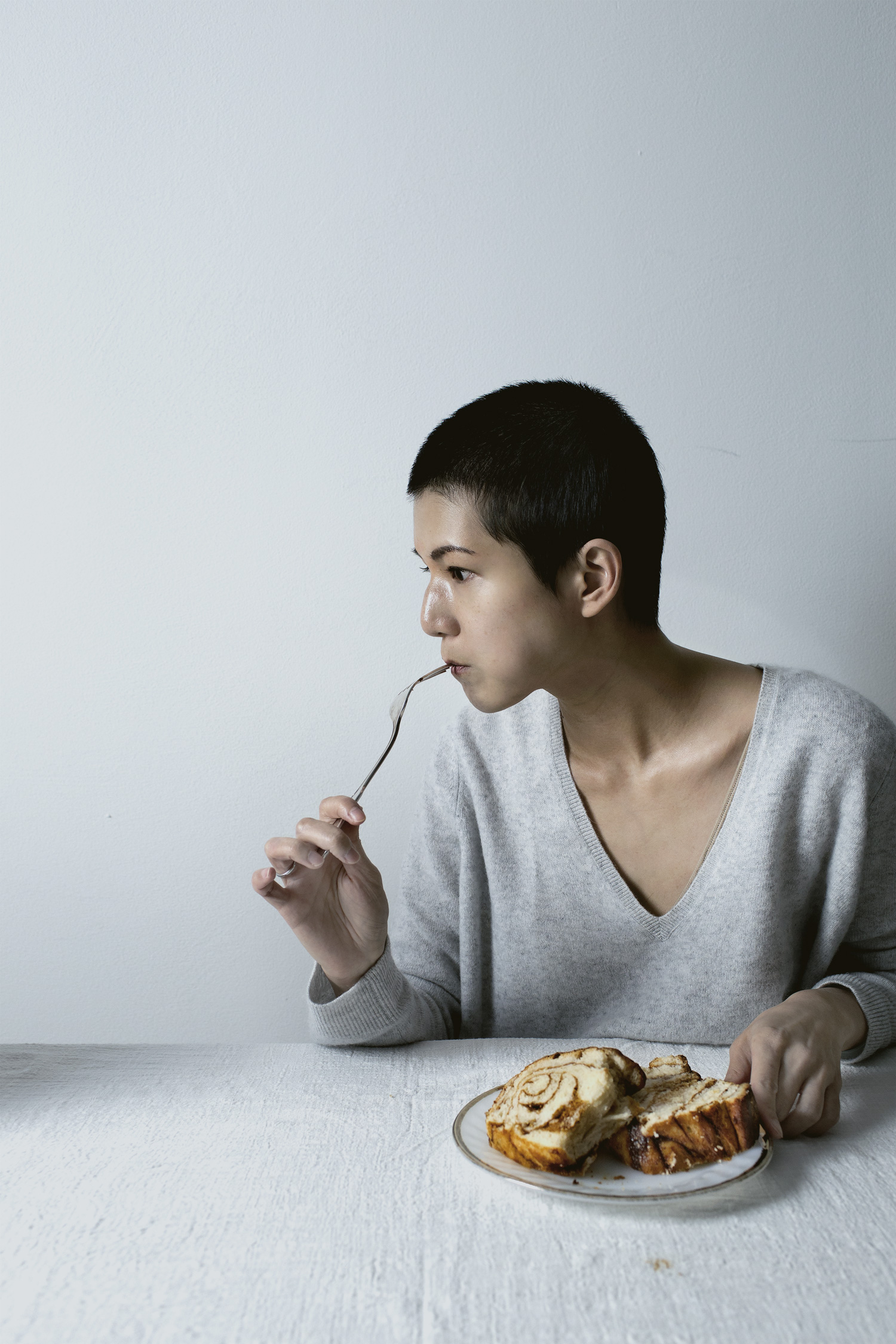 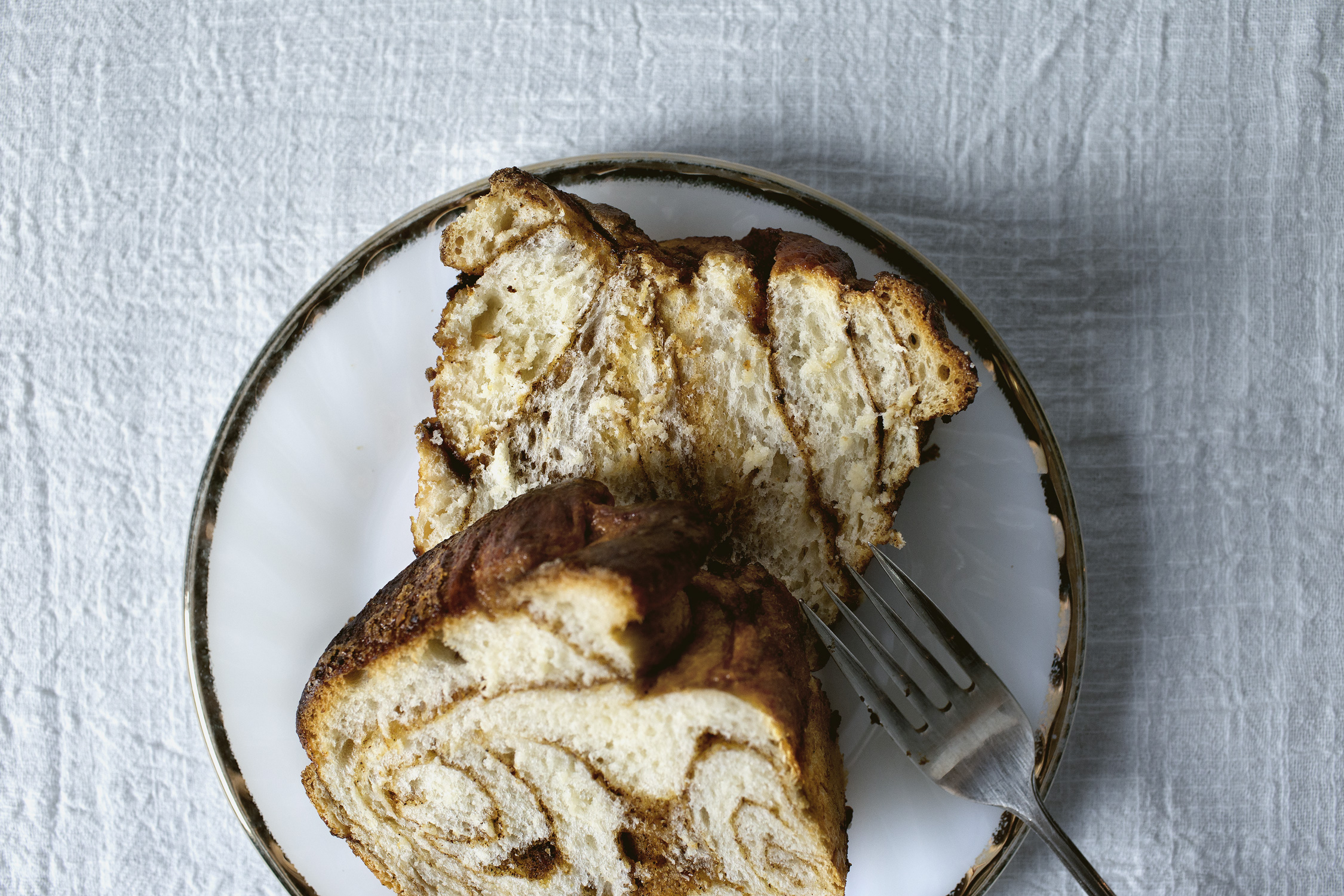 This recipe is halved and adapted from my sticky rice bread, changed slightly to suit this application.  It makes a really soft and chewy layered babka stuffed with buttered and Christmas-spiced brown sugar.  It has a semi-sticky bun situation going on with caramelized and crispy edges.