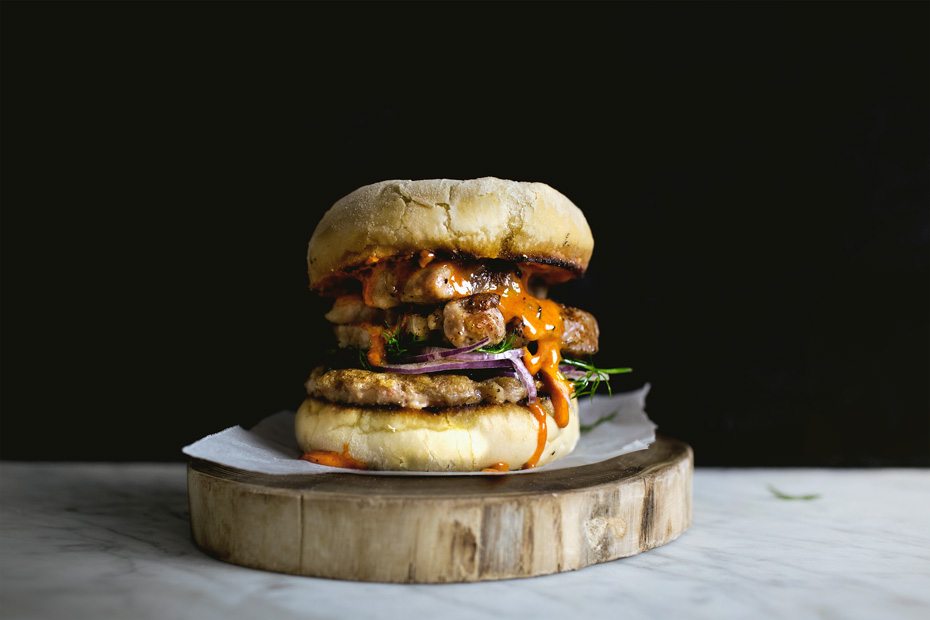 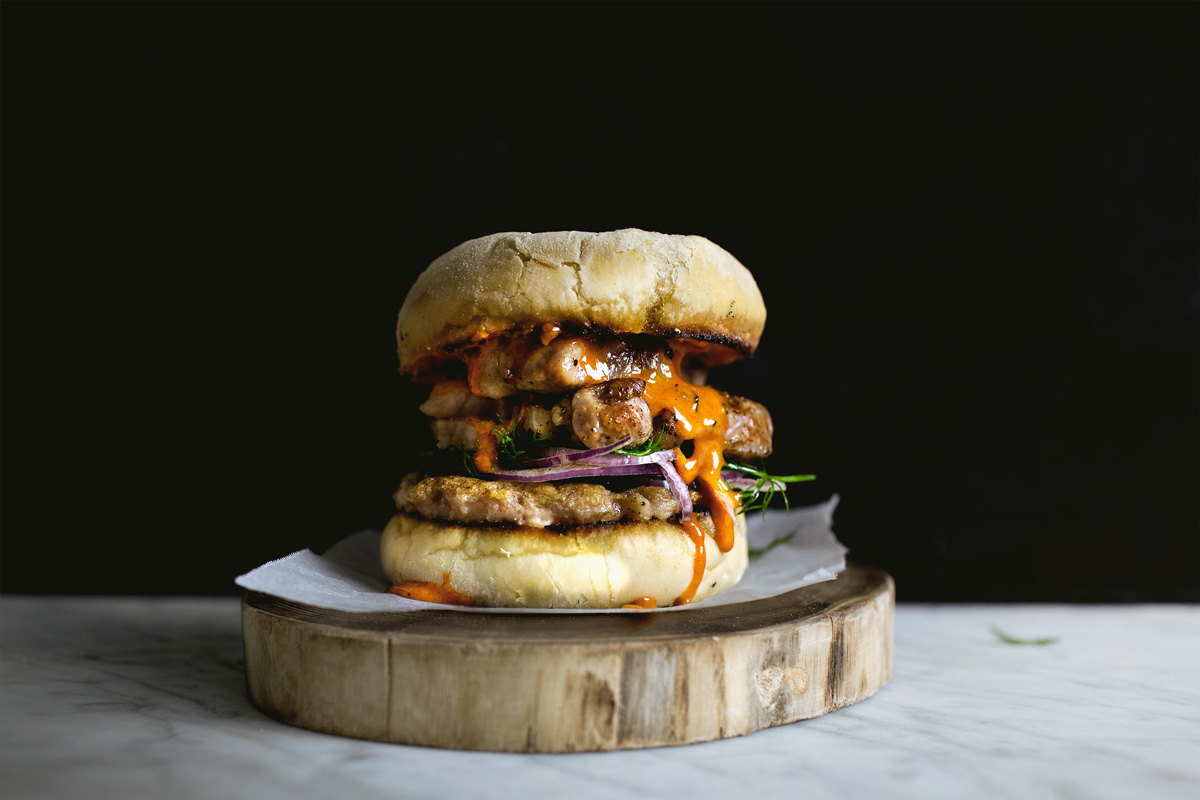 After what seemed as long as forever, but now, feels as short as a blink of an eye, five weeks of traveling in and out of 6 different countries, I am now, finally, back home.

It is difficult, if not impossible, to sum up a journey as long as this one in one post.  It began in Hong Kong, then Taipei then back to Hong Kong, then it departed towards London, then Madrid, and Lisbon, then finally, passing by Germany, back to Hong Kong, then back to Beijing.  It was a zig-zaging montage of cityscapes, sounds, smells, flavours, stimulations… but also disorientations, sense of aimless drifts, dubbed by a relentless seasonal flu somewhere at end.  How do I tell such a story I have no clue.  I suspect I would be inadequate but I shall try.

I shall try, starting with Lisbon.

Why Lisbon?  I don’t know.  I guess there are moments in life that didn’t feel particularly monumental at the times, but somehow, years and years later, they stay with you whenever you feel like looking back.  Lisbon, in the best sense, felt as such.  There are cities where we go to feel the future.  New York, London, places that strut at the tip of our times, erecting glories built in glasses and steels, forward.  Lisbon, as rare as it is precious, is not that kind of city.  Lisbon, to me at least, comes into the scene as an ageing beauty.  Her allures permeates in a lingering perfume of melancholy, on the surface of every faded tiles, behind every half-closed wooden windows, cut deep into every folds of her stone-paved labyrinth.  She is old.  She is complicated.  There are a lot of bygone glories, loss and pain in her untold stories, some remembered only objects that cannot speak.  I found myself striken by a sense of wounded dignity at her unguarded moments.  In fact, sometimes  her unpolished cheeks marked with spray paints and the crumbling of her once beautifully tiled facades, like a ripped silk dress, made me feel impolite to stare.  But, I guess, that’s why Lisbon felt so unique.  Holding her own, almost carefully, with a flustered sense of self-esteem… she sits quietly, a city by the sea.

A place like her leaves an impression.  She made me wonder about the life she’s had.  She made me want to dig deeper.  She made me wanna do things that I’ve never done to any other places, beyond the politeness of walking through her streets and allies, beyond gorging the foods that she cooked.  I wanted to get more intimate.  Closer.  I wanted to hear her sing.  And if there’s one thing that I think you should do in Lisbon, however cheesy it may be, you should hear Lisbon sing.

And she sings Fado.

OF COURSE, WE HAD TO FINISH THE MEAL WITH A SANDWICH.  WE JUST HAD TO.  THAT’S HOW IT’S DONE.

BUT THIS TIME, WE WEREN’T SORRY THAT WE DID

First of all, it might help to mention that I am not a music person.  I have almost zero song downloaded to my smartphone, and in the 7 years I’ve dwelled in New York, a trip to New Orleans, I have never stepped a foot inside a jazz bar.  Curried goat, yes, but Bob Marley who?

So no, I don’t usually do this.

But to come to Lisbon without listening to a bit of fado, a music as burnt into the soul of this country as anything can hurt, is a regret that I wasn’t planning to walk away with.  However, before I go on, I warn you, that a fado experience in Lisbon can prove to be borderline awkward if you have some kind of personal distance-issues.  Chances are, as we were, you’d be seated on a stool tucked in between the elbows and knees of total strangers, so crowded it’d be difficult to reach down to your phones to take a selfie.  Chances are you’d be forced to share foods, and drinks, too, oh hell, conversations even.  If you got problems with any of those things as I almost do – oh fuck did I mention that they smoke indoors, too – chances are, it would be uncomfortable.

But again, chances are, you would regret it if you didn’t.

A young woman in her 20’s came into the tiny spot reserved for performers, professionals and amateurs alike.  Carried only by a couple of guitarists sitting a feet away, she started singing… no, more like… pouring her heart out on the floor.  There was so much passions, longings and losses that I felt through a song that I didn’t understand.  Her body moved like a stringed puppet, cringed, shaken, pulled by the very own emotions in the melody that she sang.  Her voice, at times almost inaudible, at times piercingly loud, communicated words without any translations.  It felt… brave, almost, bleeding this much feelings to a wall of strangers staring within an arm’s length.  Just when I thought I got a sense of what fado was, after her, came an old man in his 80’s.  He was more talking then singing, waving and pointing his hands in every possible gestures, sometime as if in an argument, sometime as if in mourning.  It was comical but not funny.  It was crude but endearing.  I can’t say I know fado, but if you ask me, the beauty of it is not in the perfection of vocal skills, but in the generosity of common strangers, singing their hearts to you on a sleeve.

We left the bar a bit in awe, with a couple of new German friends who were forced to share their chorizos with us.  Walking home on her crooked slopes echoing her voice in heart-strung melodies, Lisbon felt more mysteriously beautiful than before I got to know her. 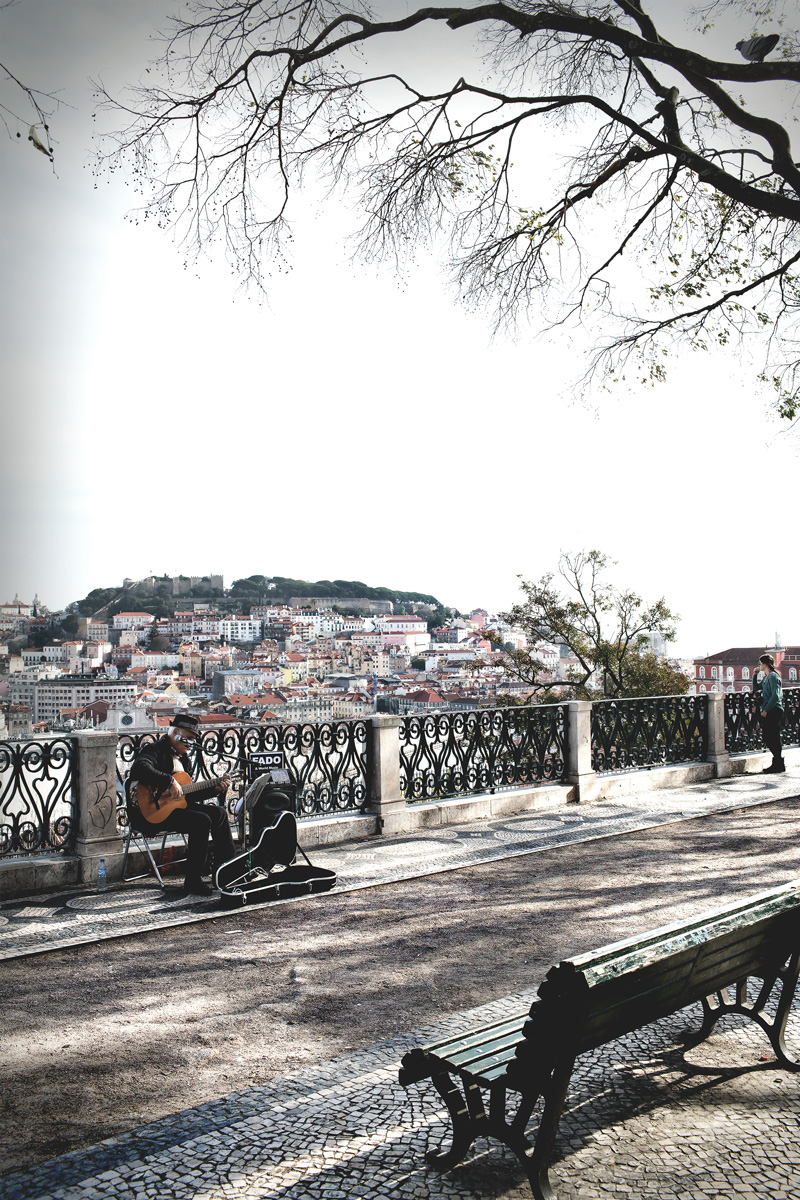 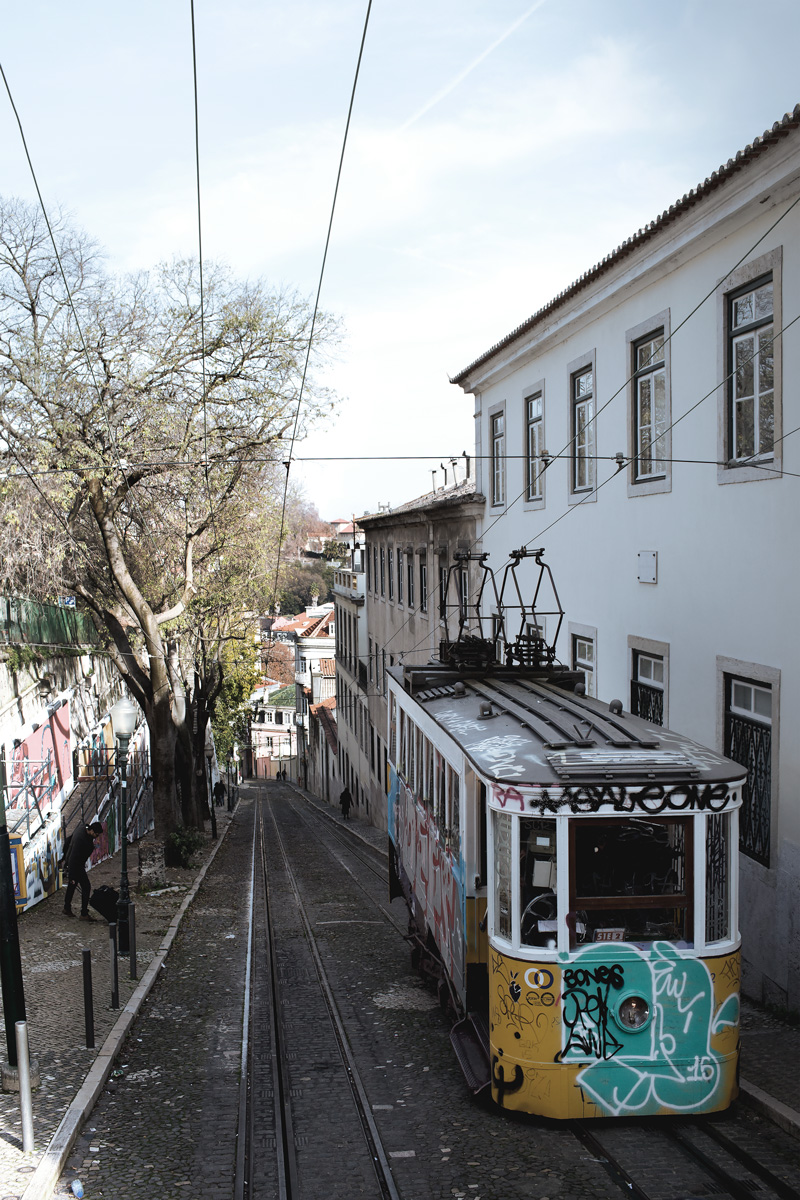 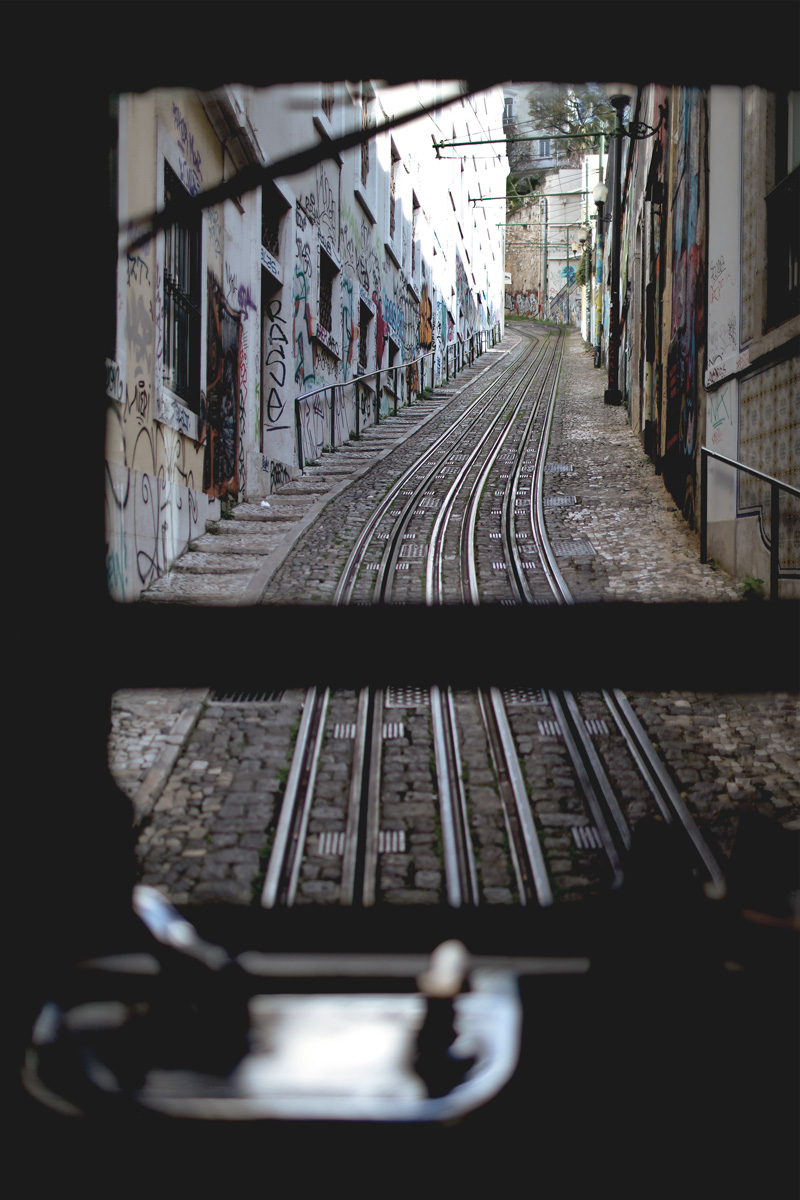 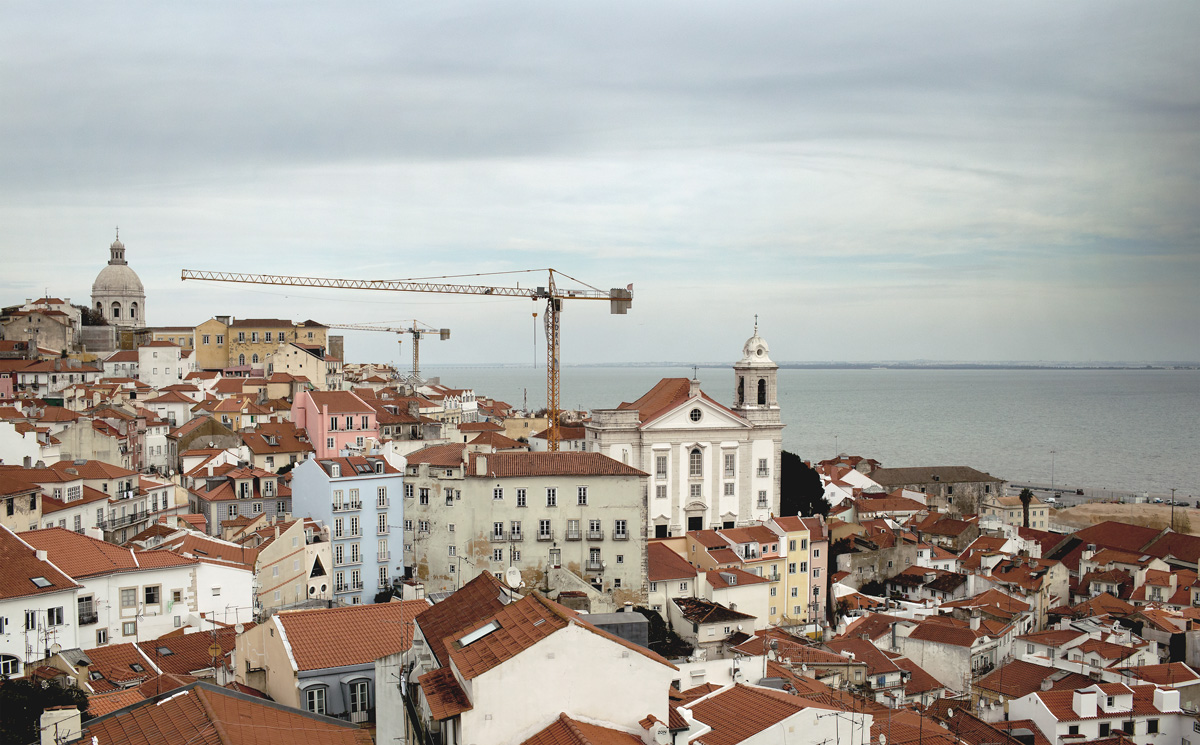 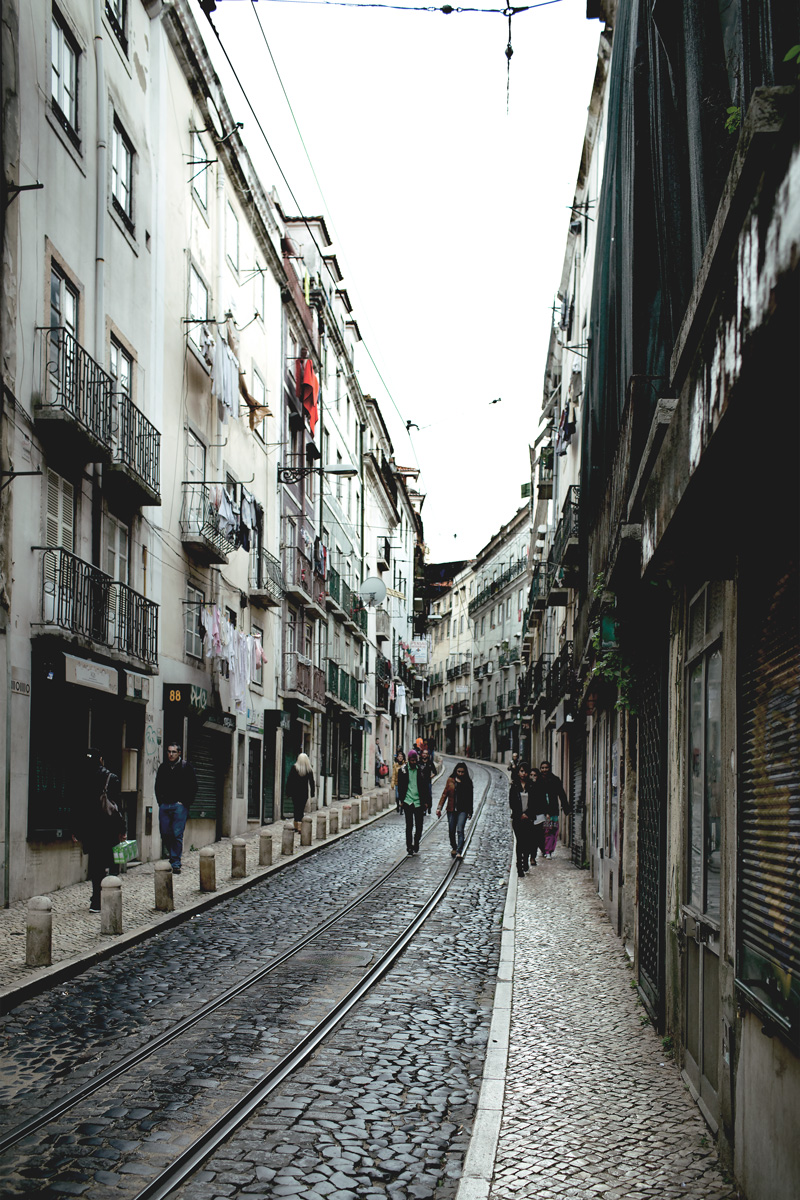 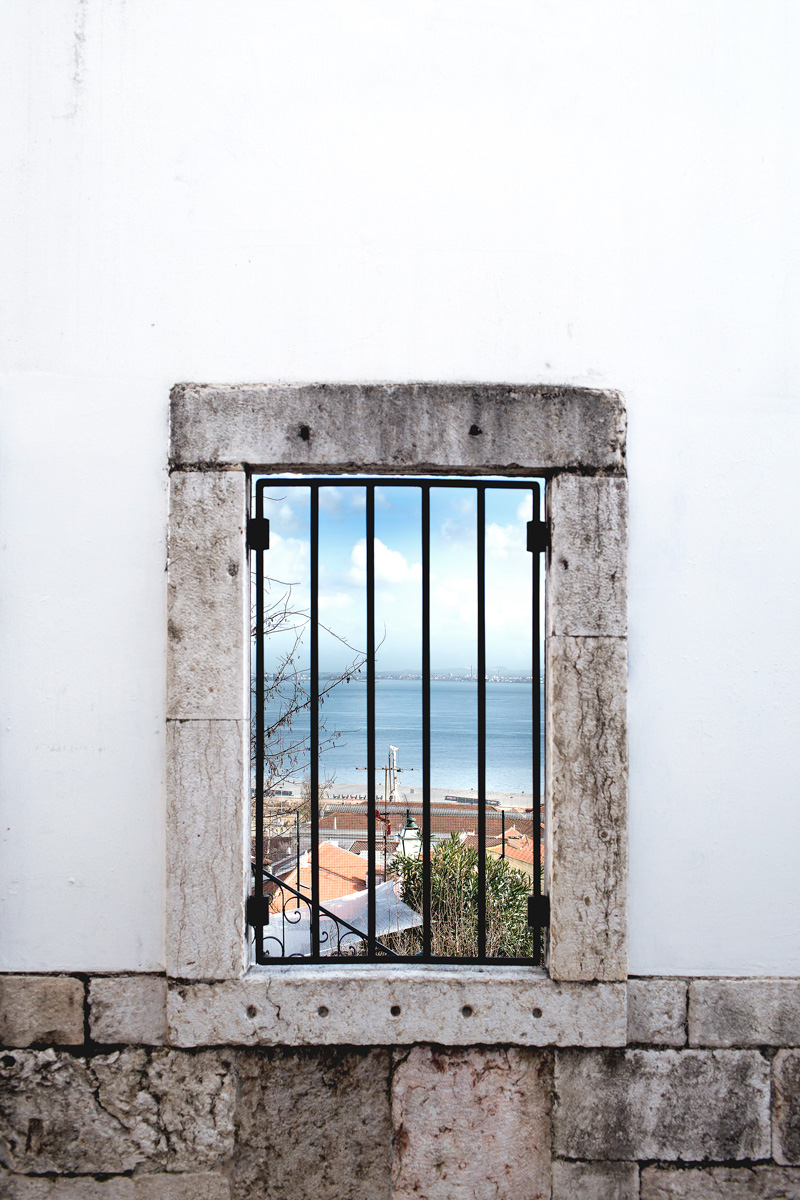 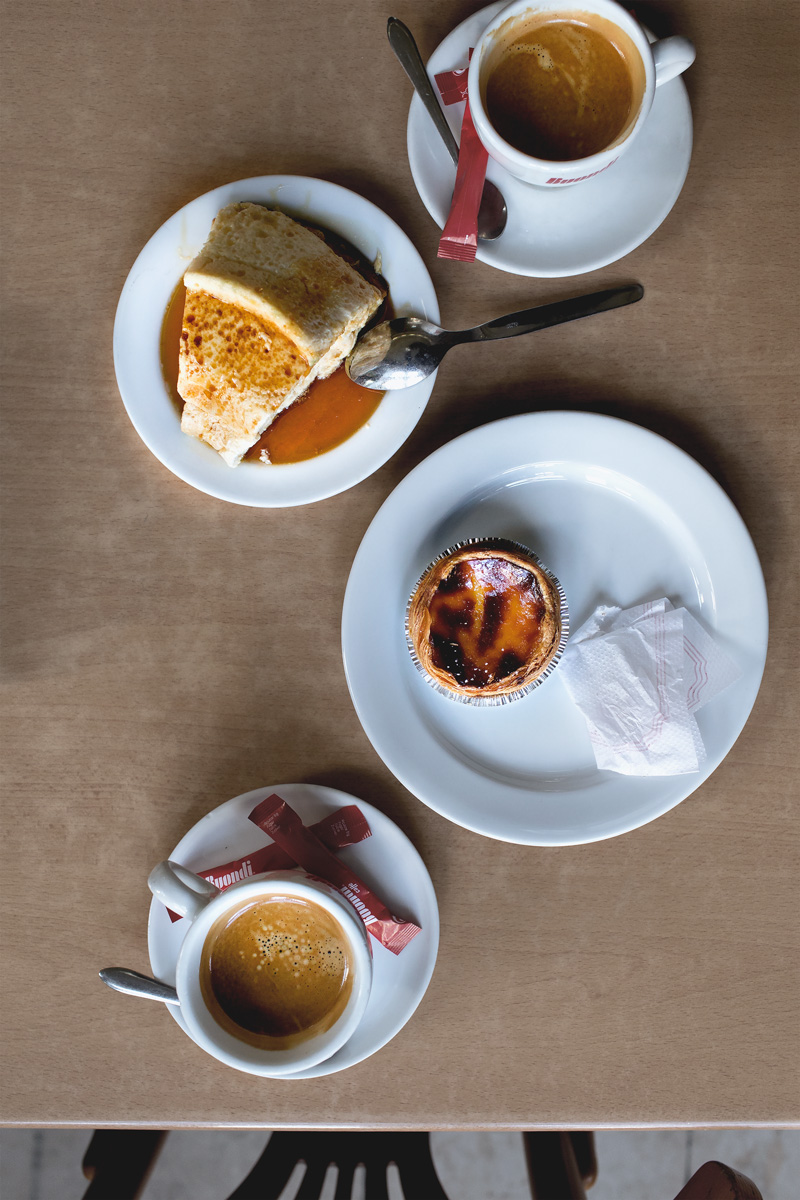 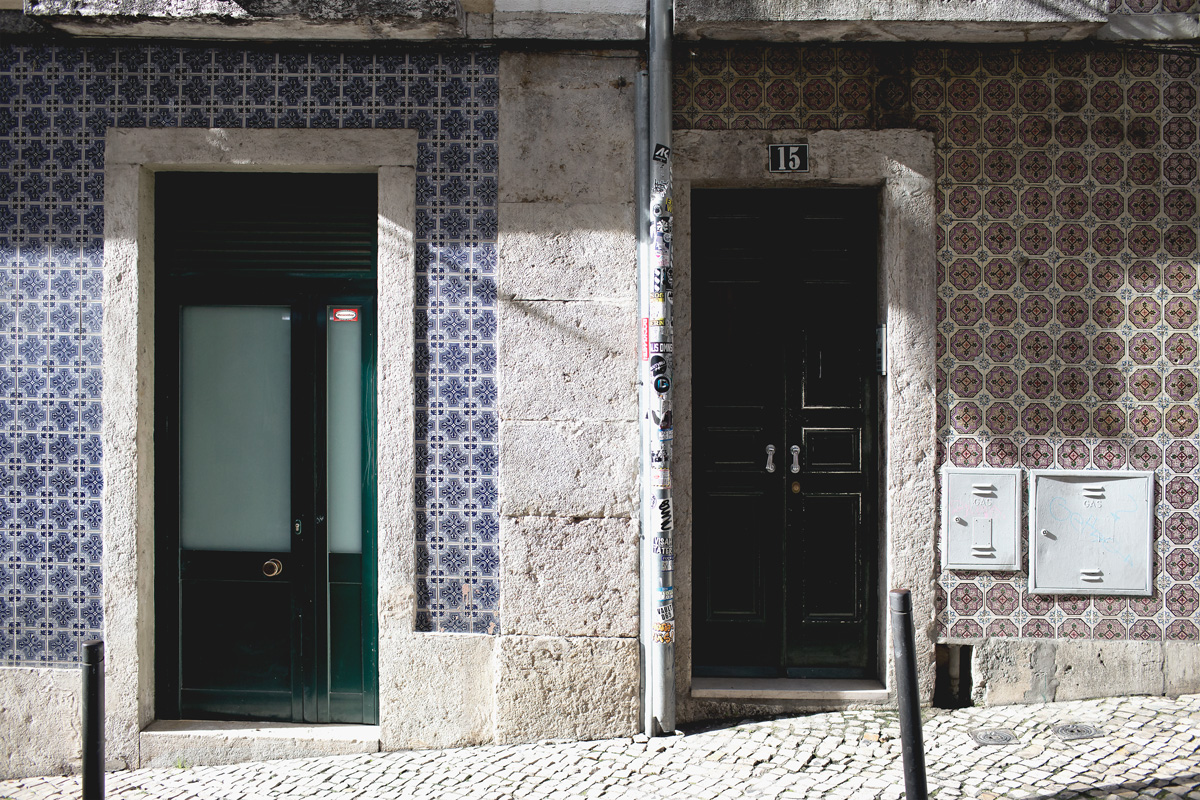 If you want to know my personal list of places to visit in Lisbon, I warn you, it isn’t much.  In the three days that we spent, there was a Sunday, which I have come to realize to be an “empty day” in most European cities.  But it didn’t stop us to visit a few classics.  Seafoods at Ramiro was, if you had some money to spare, an unapologetic orgy of the most ridiculously sized prawns, crabs, cockles, and every sea-creatures to infinity and beyond (open on Sunday if you can believe).  But skip the prego there (a beef sandwich that finishes the meal), instead, go to O Prego da Peixaria for someone who’s actually serious about prego.  For bifana, if you must, Beira Gare is probably my best bet and trust me, I really looked.  Pastel de nata, there was that too, lots of it.  I believe I’ve left trails of crispy and lacy crumbs all the way from the hills to sea and back, and then some more.  Actually, it pains me right now to think about it in its absence, so don’t make me.  If you are interested in shopping, avoid the tourist-mob around the city centre, and go to R. Dom Pedro V in between this park to R. da Imprensa Nacional.  You’ll be surprised with many local designer finds that won’t burn a hole in your pocket.  Speaking of pocket, if you’re always looking for reasonably priced kitchenwares, prepare to spend an hour in Braz e Braz.  Aluminium skillet for 2.5 euros.  Can’t beat that.

Then, for your journey home, into every possible empty spaces you could cram with inside your luggage, under your hat, or fuck even tucked into both of your socks… I want you to stuff it to its maximum capacity with this stuff, canned seafoods.  Look, if you’ve never had the impulse to down a can of high quality sardines standing by the kitchen with only an underwear and a loaf of bread in your hand, if that was never your thing, then… I don’t know what the hell is wrong with you.  But if it is, Lisbon’s the place to do it.  From wonderlands like this place if not here, I want you to hoard cans of baby sardines in spiced olive oil, bacalao in garlic oil, fillets of mackerels with limes, mussels in chili and vinegar.  Hey, chances are you’ll burn a few right inside your hotel rooms, so when in doubt, buy 3 of everything.

But if it’s beyond cliches that you’re looking for, check out this ceviche restaurant that was always packed sitting right on the corner from where we stayed, A Cevicheria, which, in fact, brings me to this little sandwich that I thought you might appreciate.

As I have mentioned above, in Lisbon, a seafood feast is traditionally (and brilliantly) finished with a meat cutlet sandwich.  They call it, the “dessert”.  But whether it was prego (beef), or bifana (pork), I gotta tell you, honestly, I wasn’t entirely blown away.  Among the four times that I’ve tried them, at different locations if I might add, they all came across as a little bland and… under-exciting, and I suspect that someone at A Cevicheria, agreed.  At this tiny but busy restaurant, the menu was composed simply with 5~6 seafood dishes, heavy on different varieties of ceviches but also, hot quinoa risotto included.  Then at the end of the menu, as if suggested but really, mandatory, a sandwich.

Of course.  We had to finish the meal with the sandwich.  We just had to.  That’s how it’s done.  But this time, we weren’t sorry that we did.

Instead of a traditional prego or bifana, it was a surf and turf, pork belly and shrimp sausage sandwich.  I mean of course, why not.  It was bursting with the fattiness of caramelised pork belly which paired so well with a thin, bouncy layer of shrimp patty at the bottom.  Buffering in between, there was a bit of sharpness from red onions and herbs, lubricated with the creaminess of some kind of mayonnaise-based sauce.  “Mm, ok, this makes sense now… finishing the meal with a sandwich”, we mumbled to ourselves.  And I think, with my best effort to replicate the recipe, you’ll get it, too. 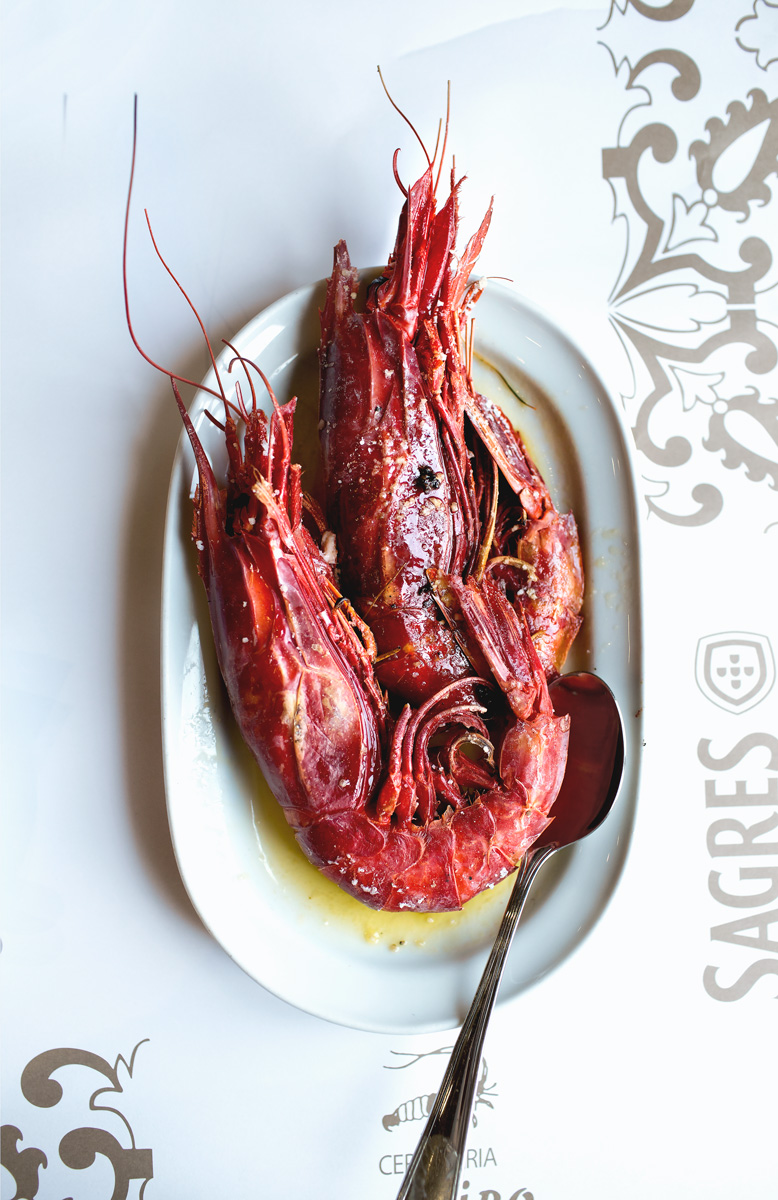 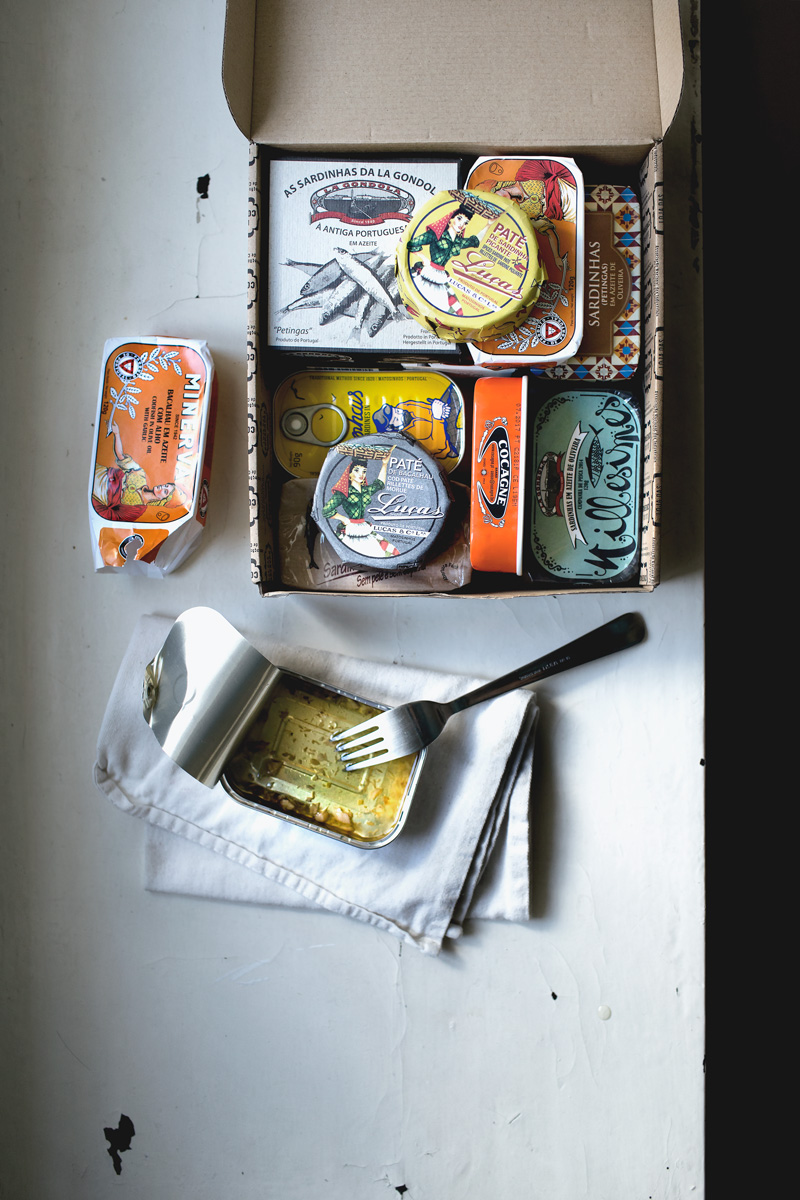 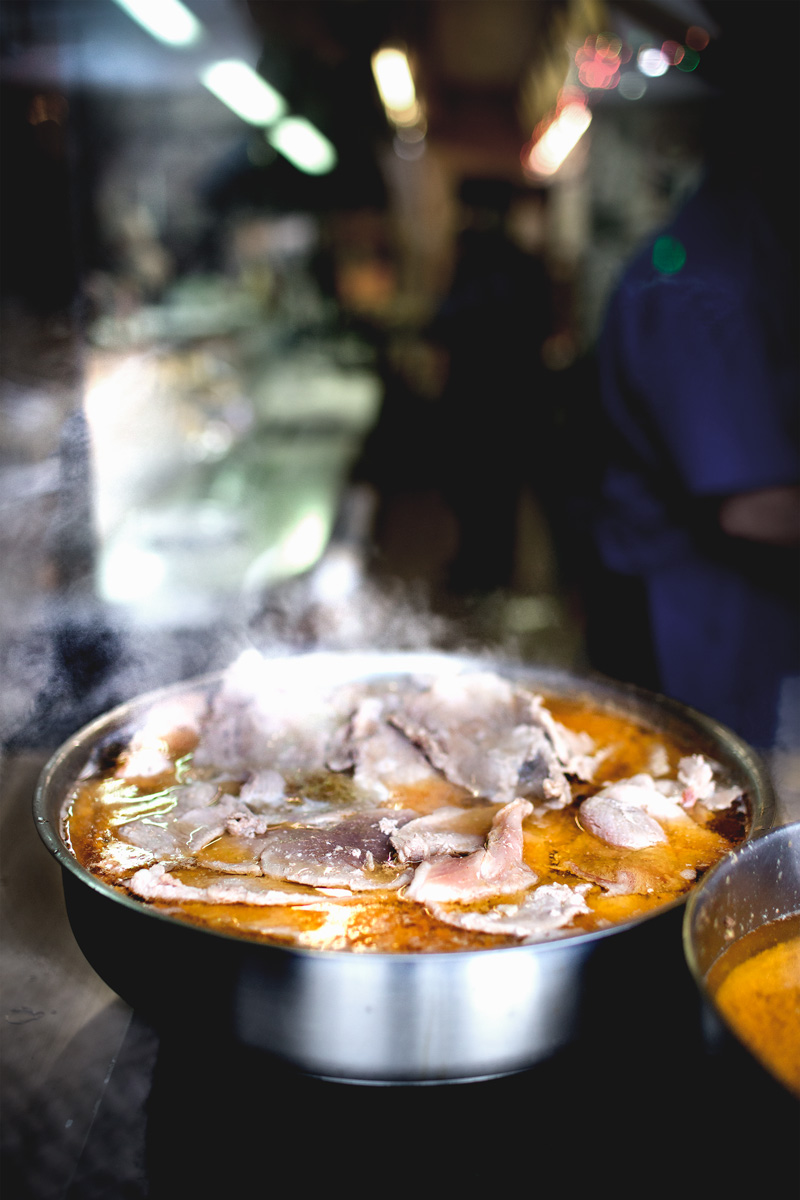 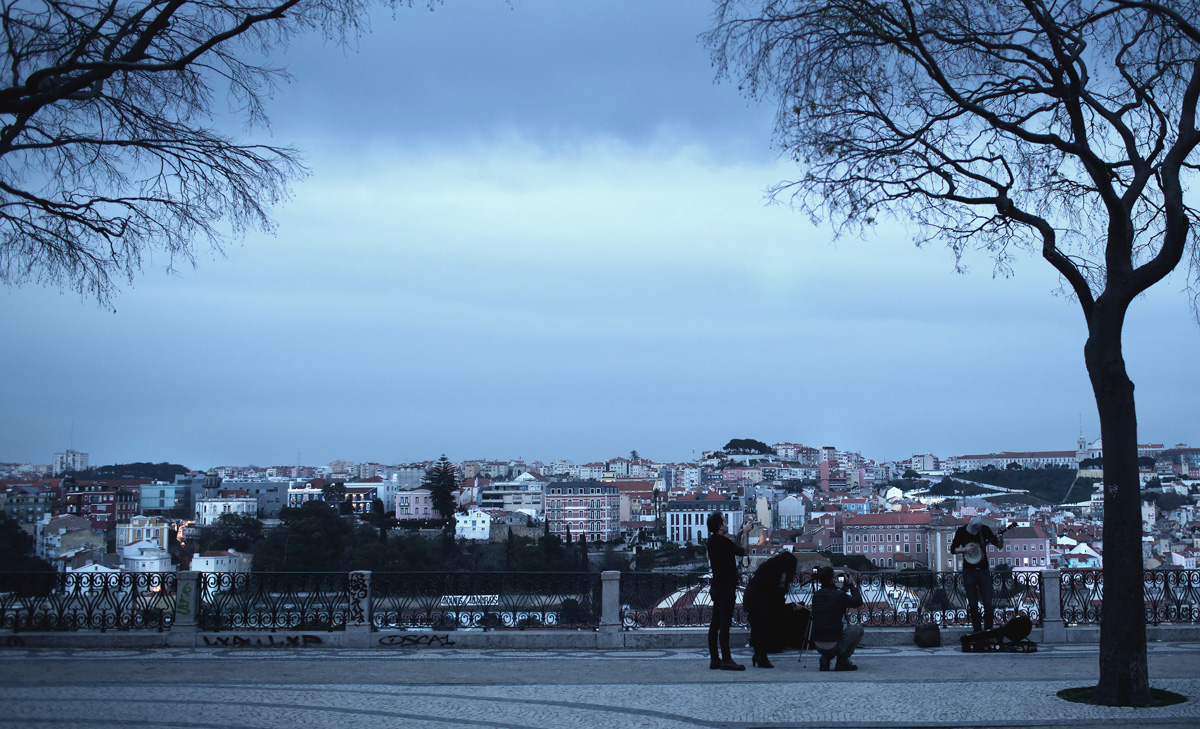 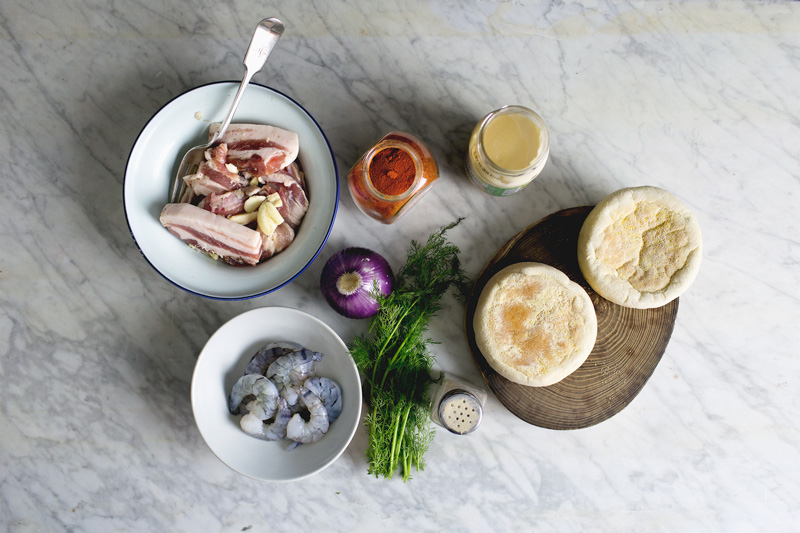 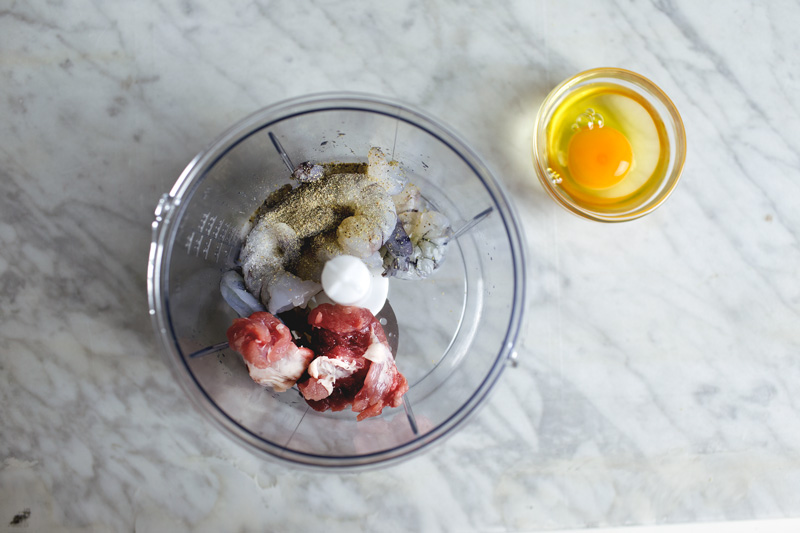 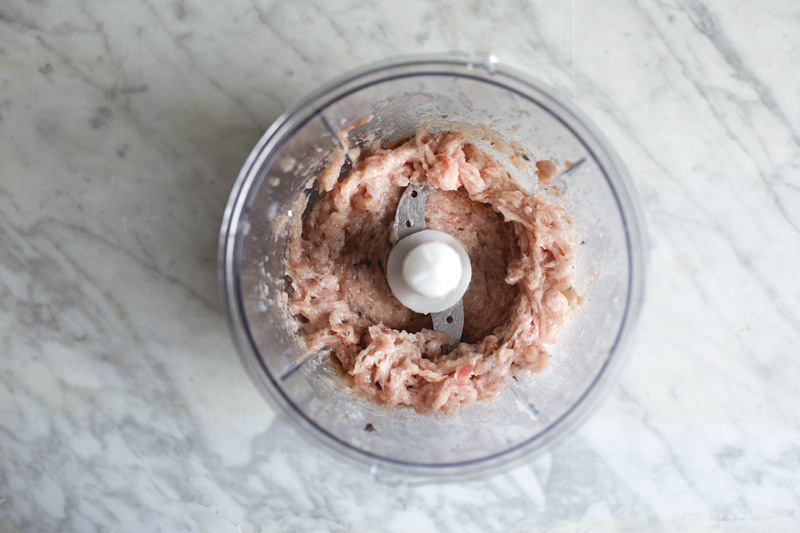 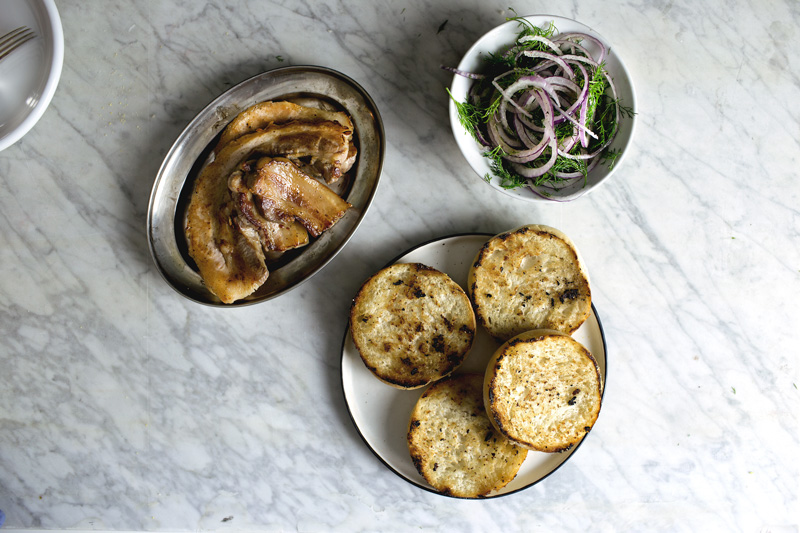 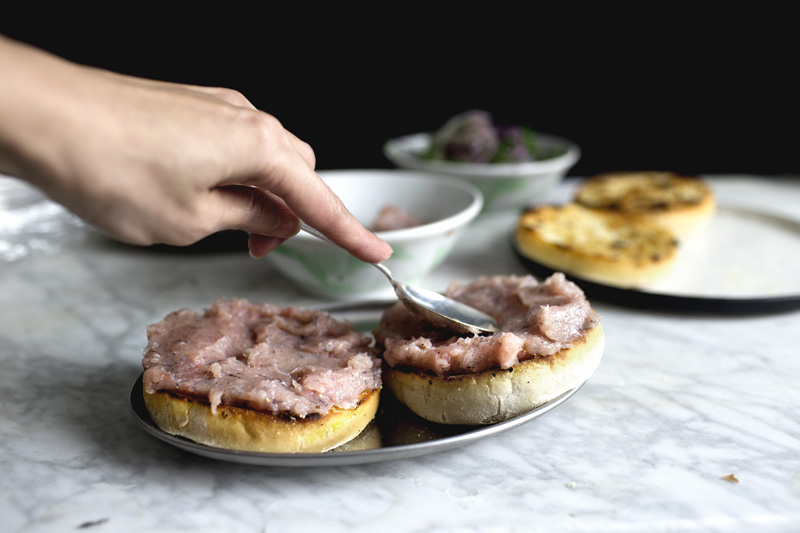 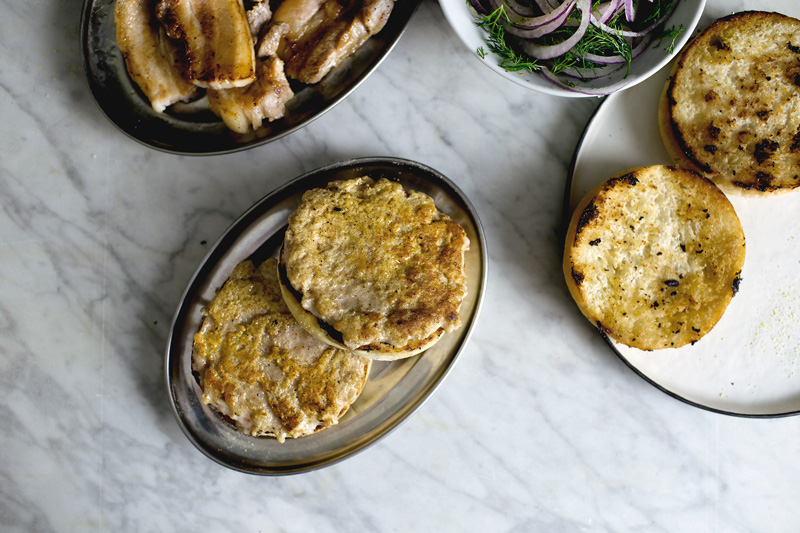 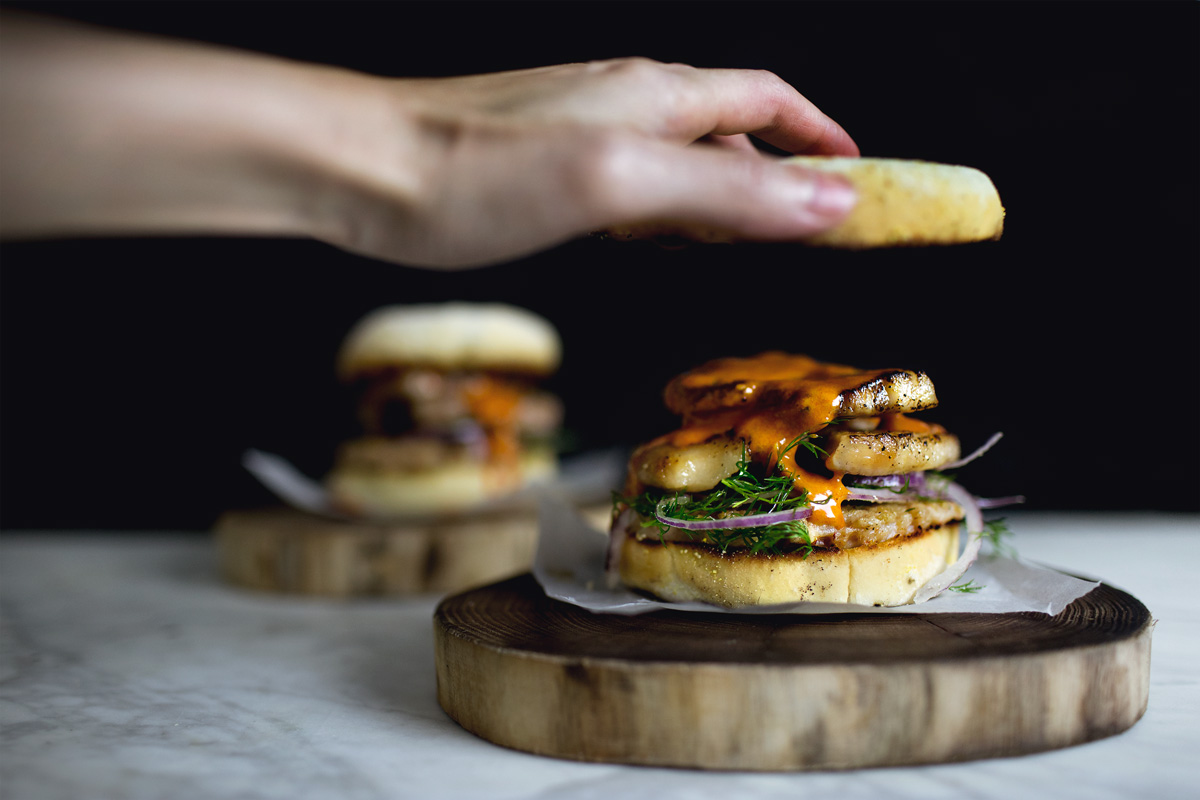 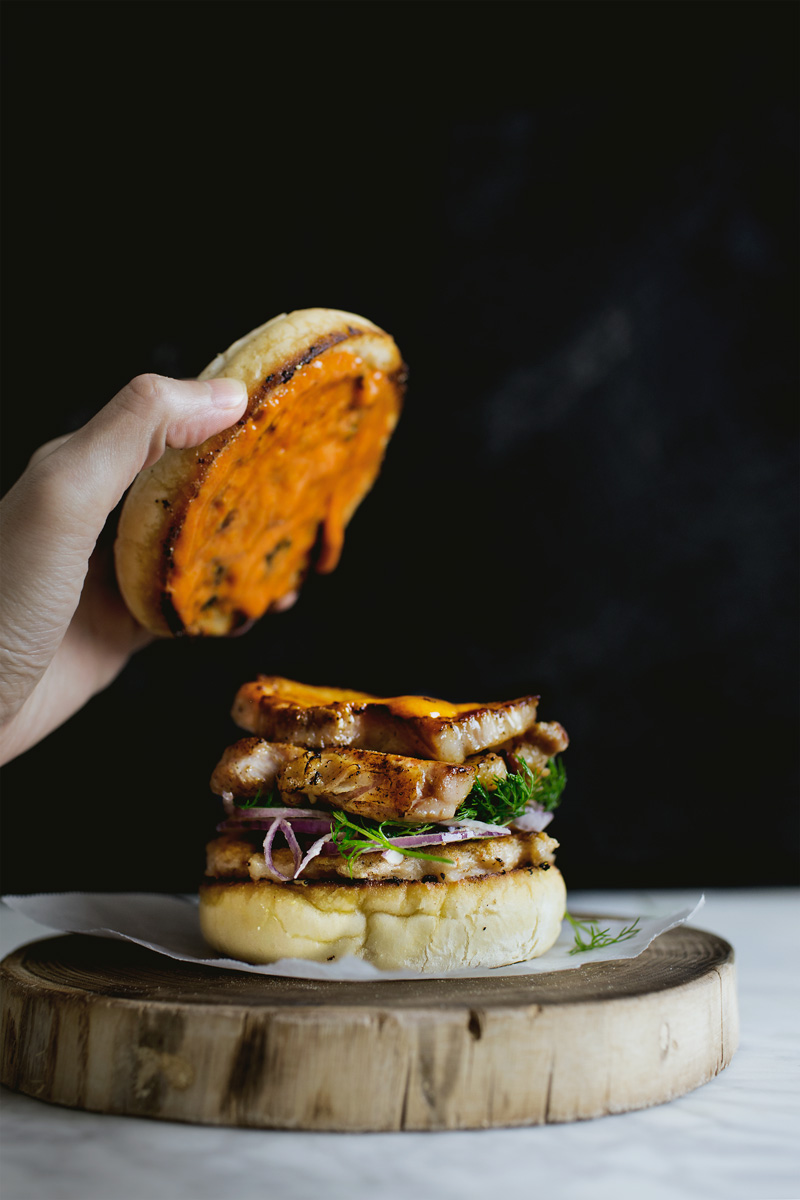 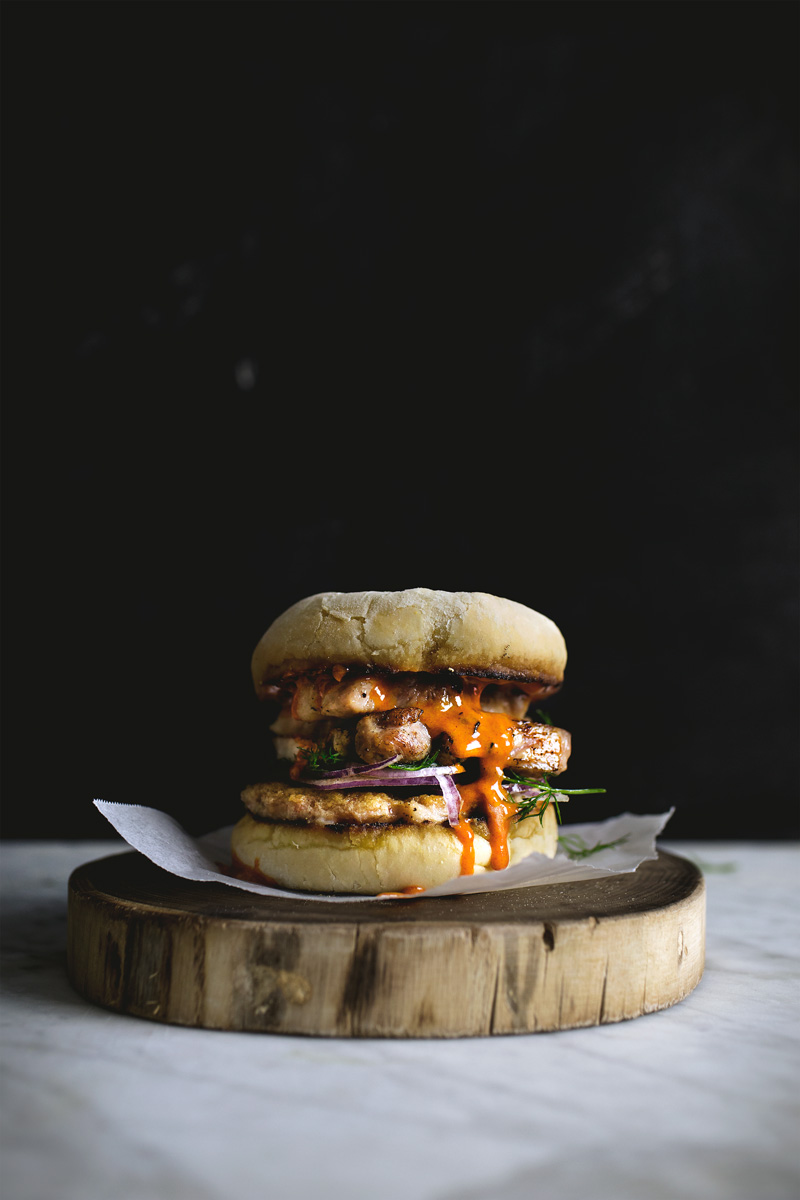 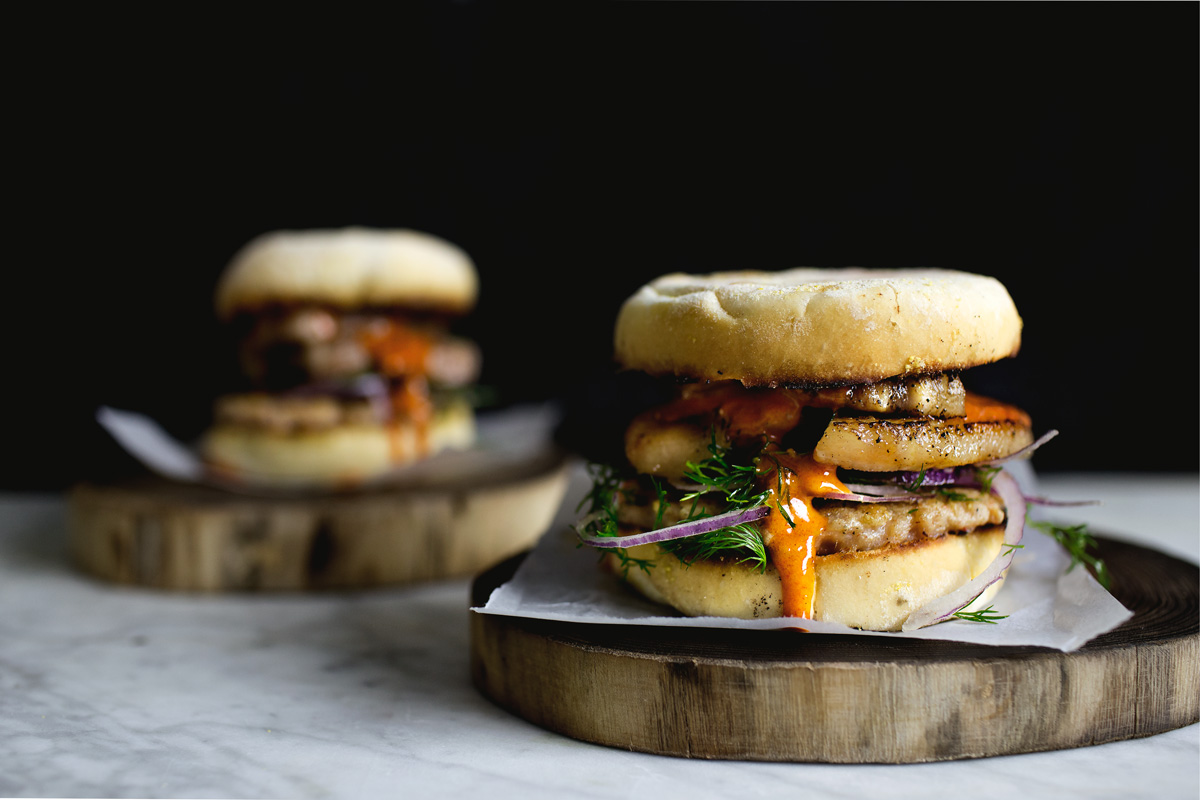 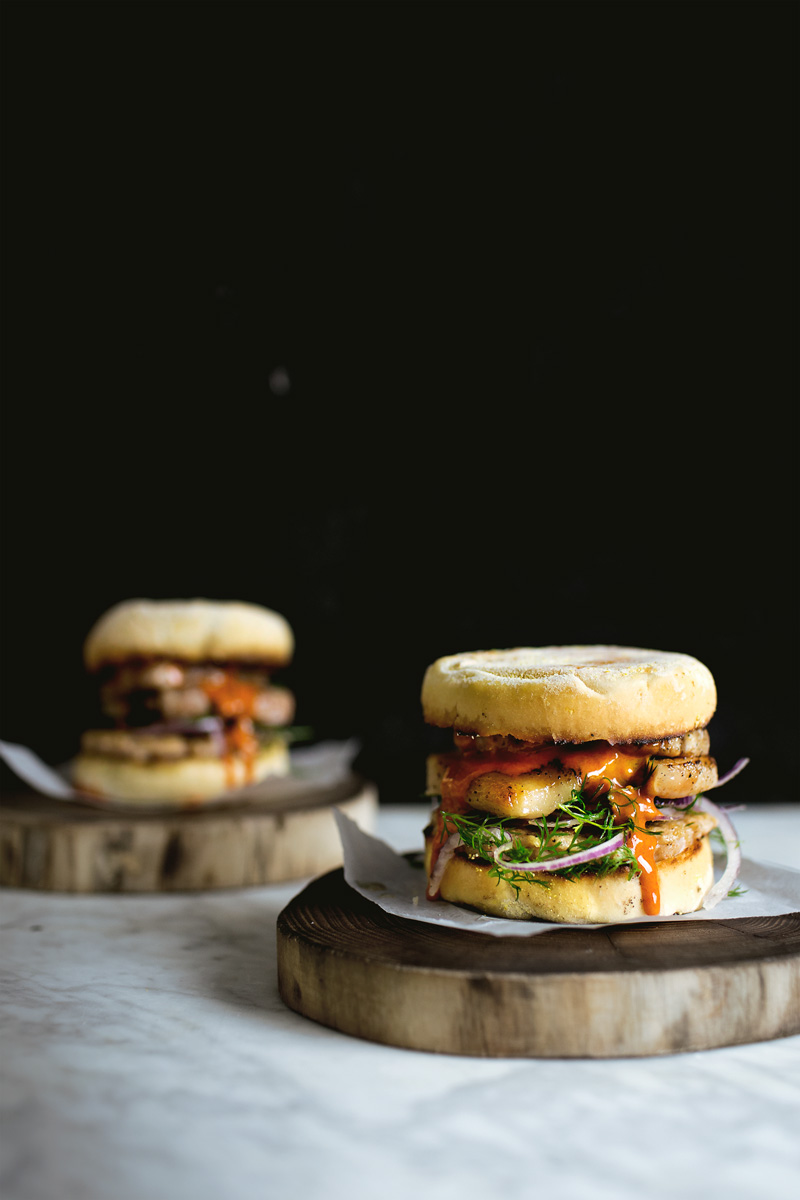 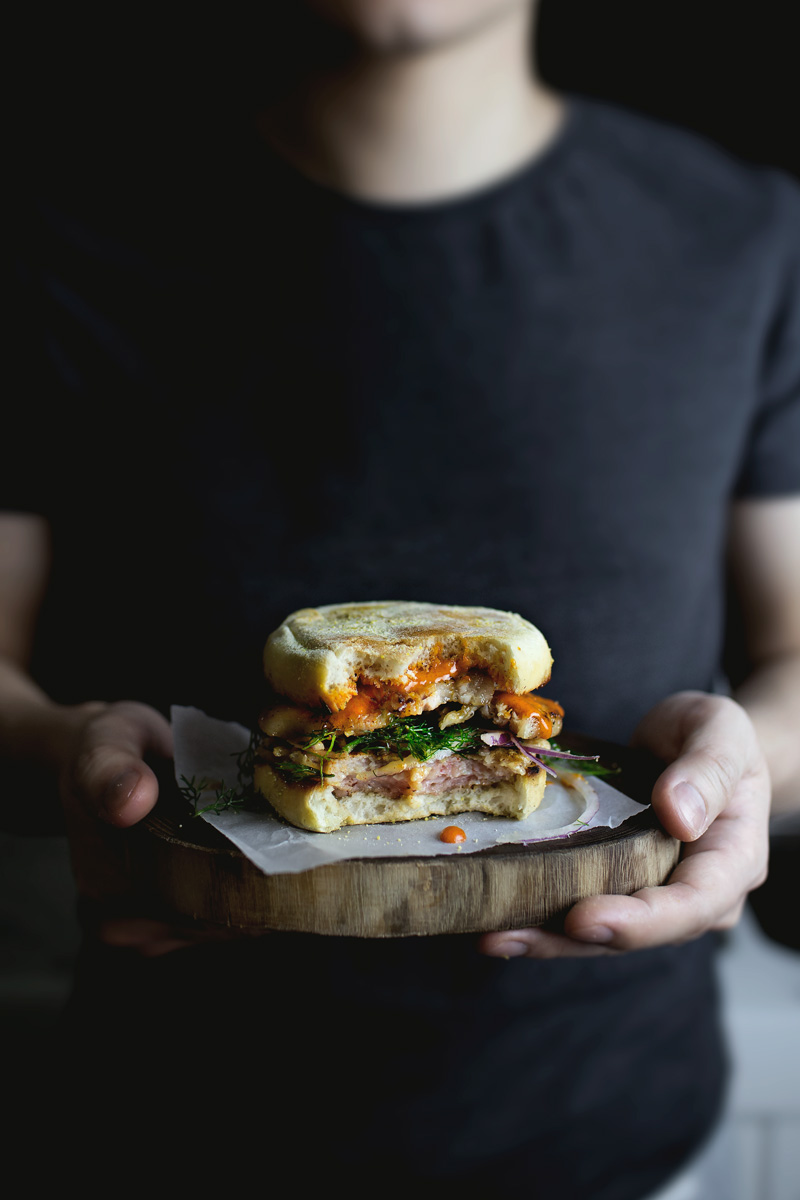 You can also use 100% shrimp for the shrimp cake (replacing the lean pork with equivalent amount of peeled shrimp).

This aioli recipe uses 50% less oil than typical, making it slightly healthier-ish, and I think it pronounces more flavour and richness from the egg yolk.