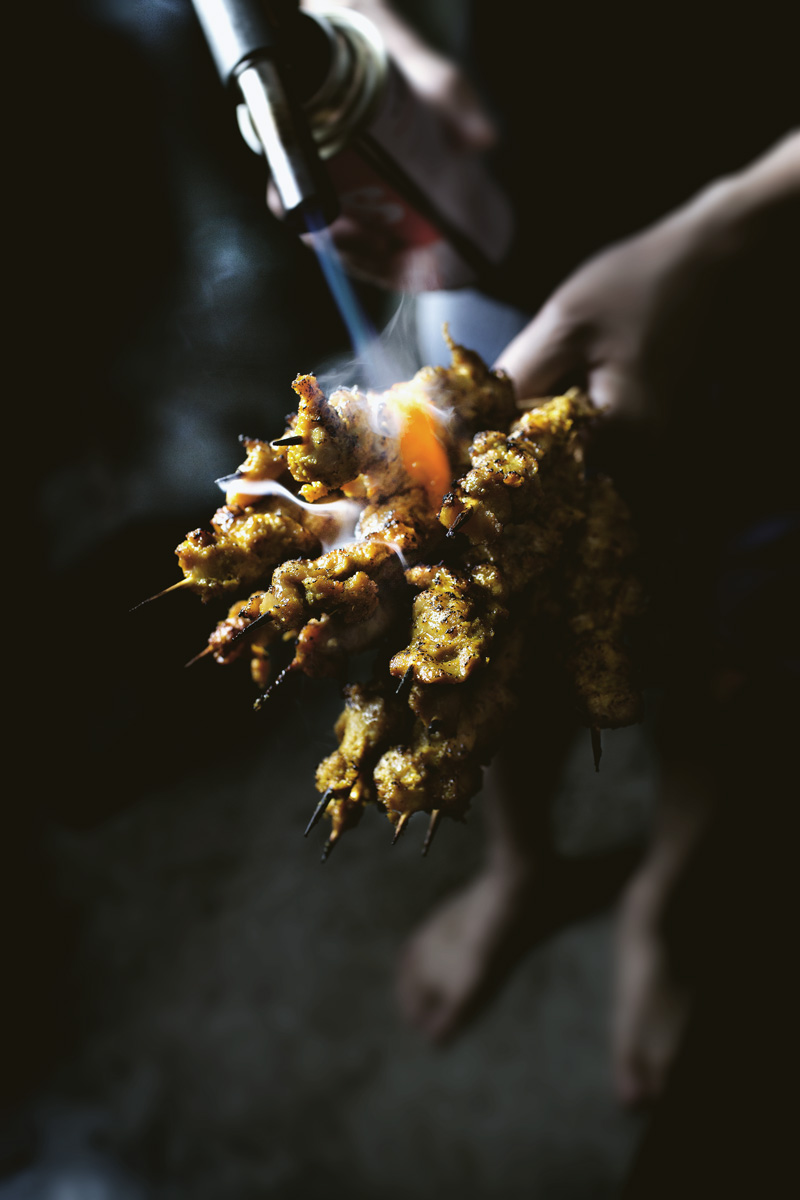 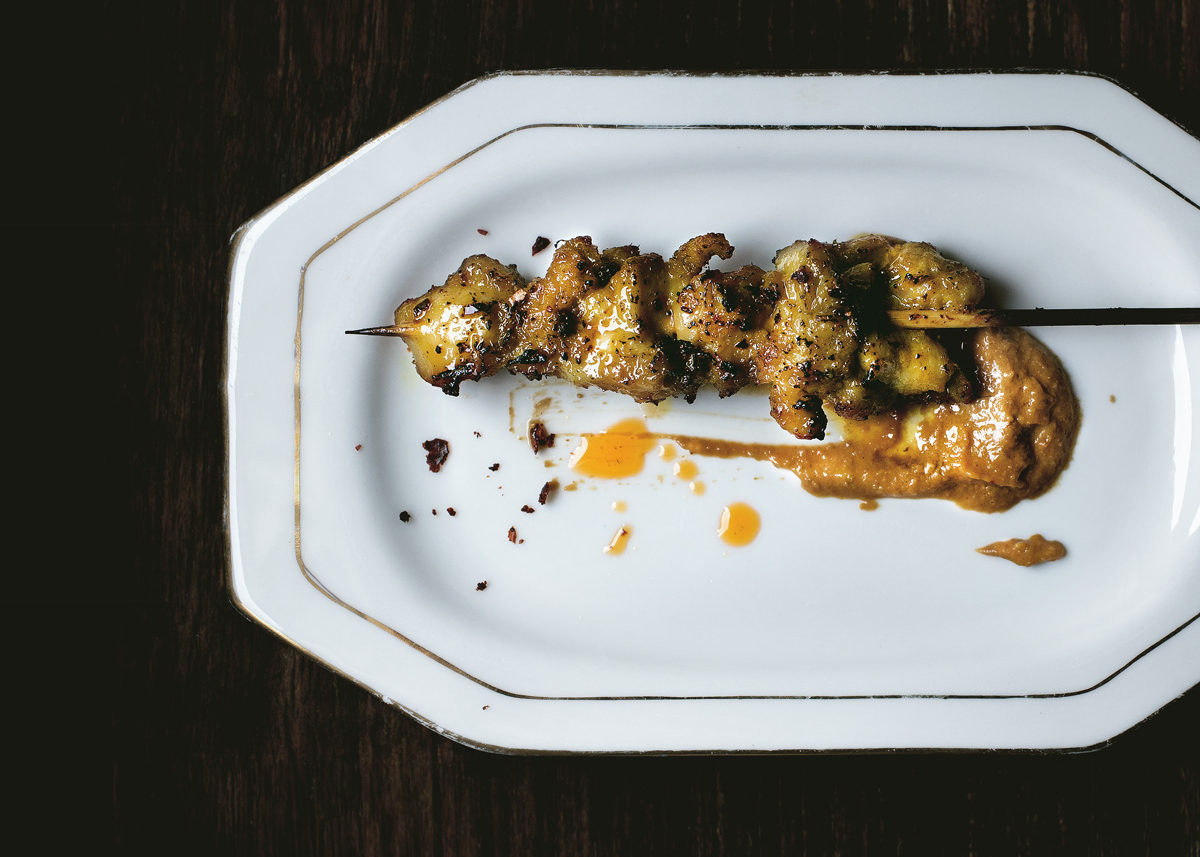 WHY NOW?  WHY THEN?  NO REASON.  IT WAS JUST A SWITCH TURNED ON,

Craving, is a strange thing.

It’s been 8 years since the first and last time I visited the island of Bali, and not in the almost 3 decades before nor the years after, had I given this thing called sate (or satay) even the slightest attention.  Weird, given that I have, since then, graced through the feeding grounds of Malaysia, Thailand, Vietnam and Hong Kong, trapped in the seduction of rice noodles folding under that intoxicating broths, infatuated with fish heads bubbling inside the sinisterly red gravy, undistracted from the fetish pursuit of just how transcendently sexy it could be, inside the supple thighs of a chicken gently poached in herbed stock and served over rice.  Might I even add that when it comes to meats-on-a-stick, I did plenty damage around the globe.

But sate?  Yeah sure I saw it somewhere here and there.  But what, why and how, honestly, I couldn’t care less.

Perhaps I’ve always suspected them to be dry, a reasonable doubt given the skimpy amount of meats having to fully char over charcoal.  Or that they, out of the mere once or twice close encounters, appeared to have been on the sweeter side of seasoning, a repellant for a set of taste buds that can’t appreciate dinner oozing into the dessert category.  Either way, it’s just never been my thing.

But then, out of nowhere, in the least likely form of seduction, it caught my attention on a Thursday night TV program playing on repeat.

As far as the AFC program goes, I can’t gush much about it, just an Asian traveling show featuring an assortment of sate in Indonesia.  In terms of writing, not even a great one.  As I said, an unlikely seduction.  But before I even understood what I was feeling, first, curiosity blossomed.  Why now?  Why then?  No reason.  It was just a switch turned on, like the day when a girl starts to like a boy.  What is sate?  What have I missed?  The eye-smearing smokes coiling above glowing charcoals started to intoxicate.  The snippets of meats clothed in pastes, fanned out and flapping above the fire started to portray, not dry, but tightened strips of meats condensing in flavours.  The oily and sticky dipping sauce… the squishy bread in mopping duty… the bitten pickles that sharpened my imagination…   all of a sudden, aligned. 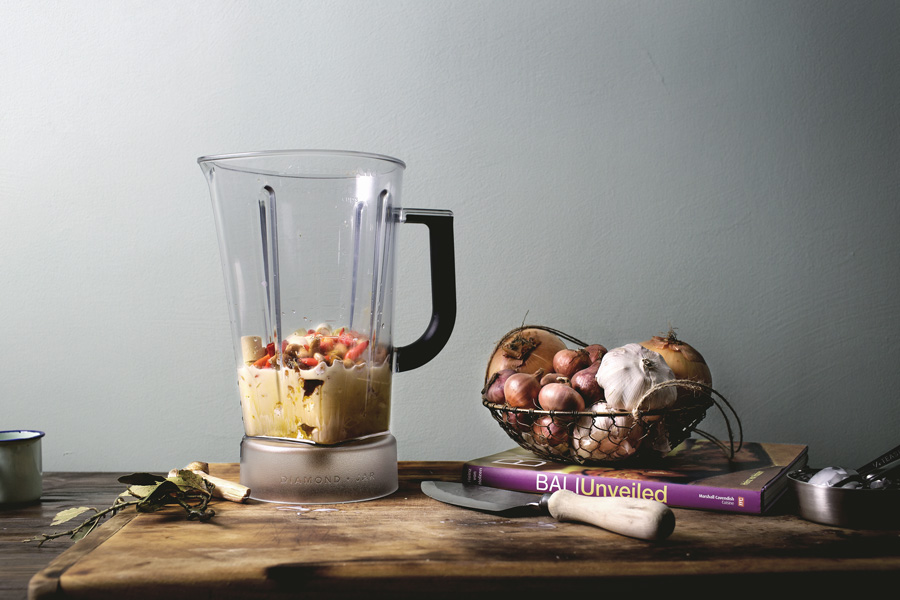 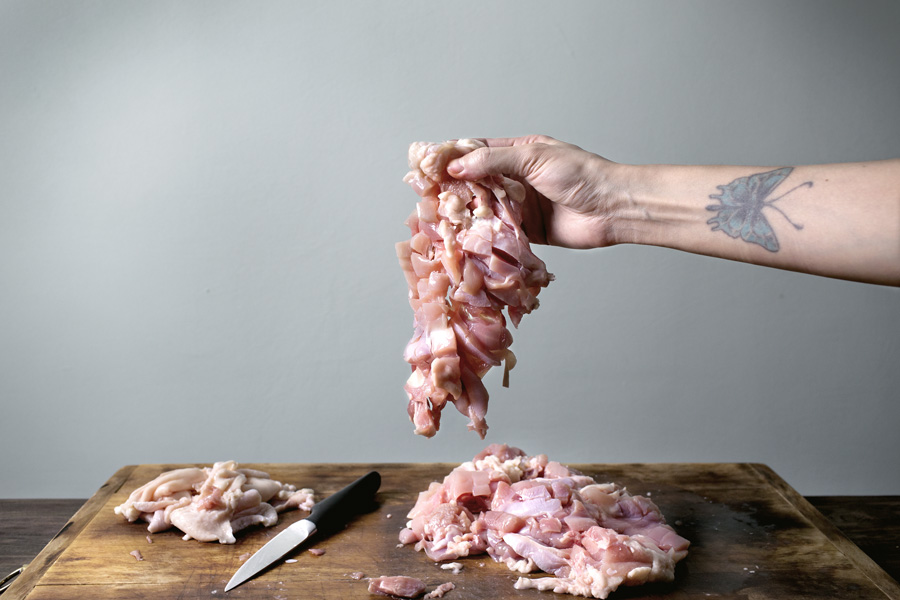 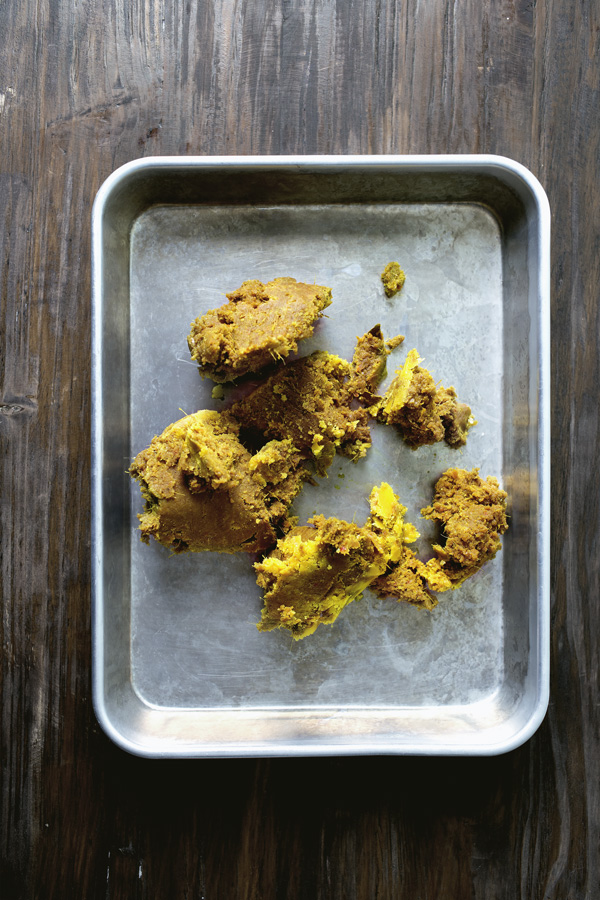 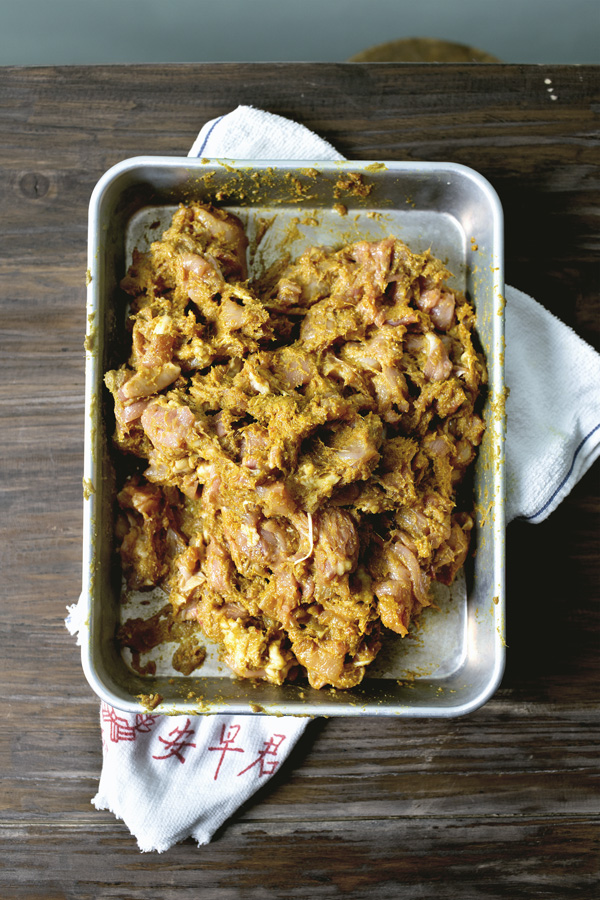 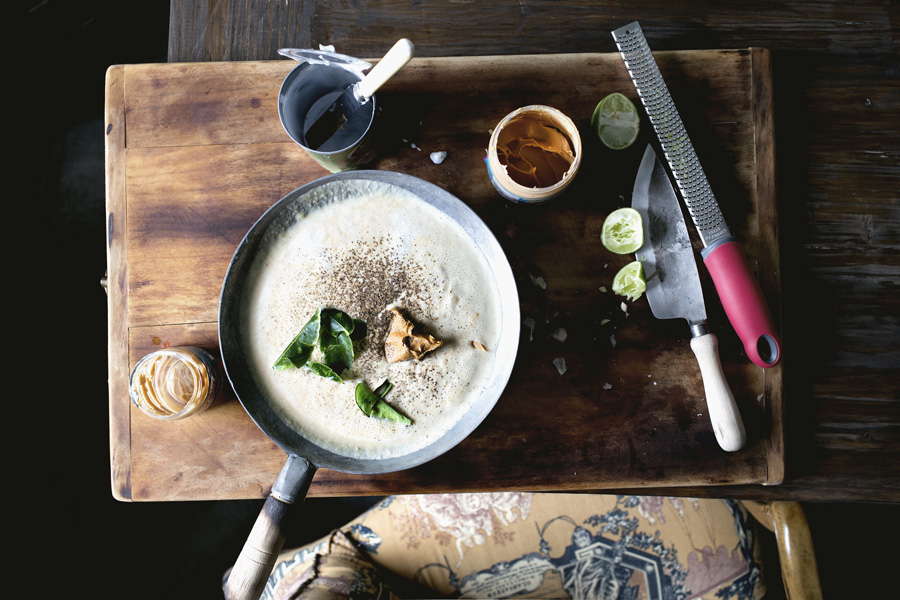 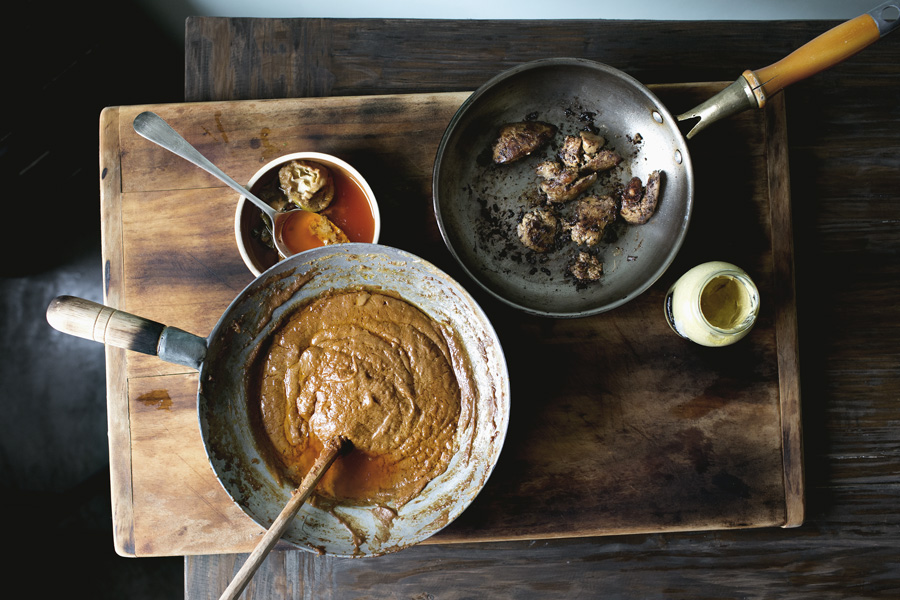 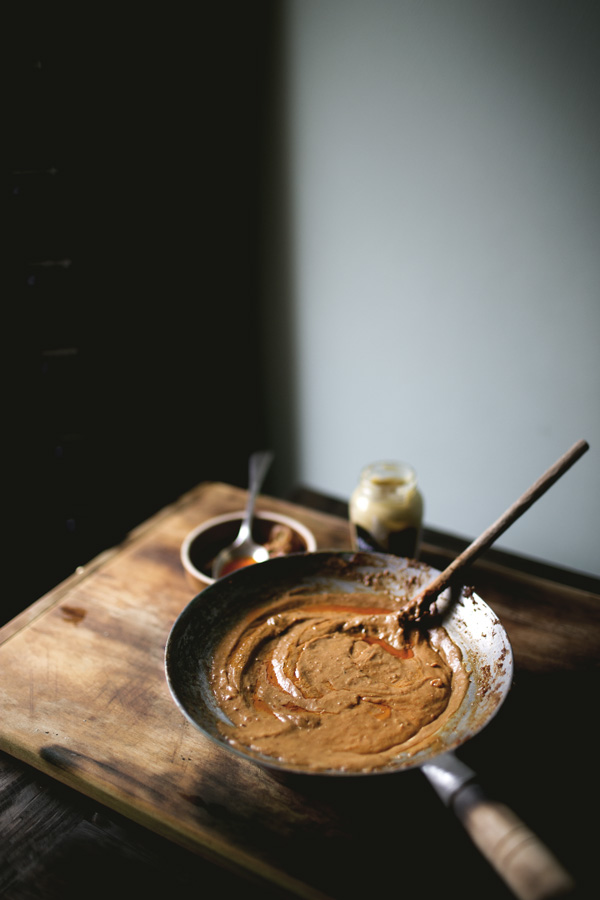 I let the young attraction brewed without action for a few days, then on the third day, I opened the cookbook I brought back from Bali for the first time in 8 years.

I was wide-eyed and struck by the techniques and yielded flavours that were new to even my long years of cooking.  First I must clarify that I  know the word sate, is as generalized as the word sandwich.  It vaguely depicts in forms and regions, but unbound by flavours and preparations.  I am of course, in this case, talking specifically in Balinese style.  The techniques in making the spice paste that goes to marinate the meats, blew my mind.  Think of how a typical southeast Asian curry is made, that a curry paste is cooked into liquid to become a sauce, then think of this technique as going in reverse, in the way that a pureed “curry” is cooked down – until the oil separates from the liquid, until the liquid evaporates from the solids, until the sugar darkens into caramel – to become a paste.  It is almost a jam-like process, intensely aromatic.

But at this point, was where I parted with the cookbook.  It explicitly declared that a Balinese-style sate is never served with a sauce, but I couldn’t shake the fetish of a spicy “dirty” peanut sauce.  Dirty as in chicken livers, in this case, browned and pureed into the peanut butter and coconut milk-mixture to bring an extra depth of flavour.  If you’re not an liver-person, don’t panic, because you won’t be able to pinpoint the origin of that extra richness that hovers in the background, very much the same way it does in Cajun dirty rice.  All you would and could focus on, is the sizzling char on the tips of savory and tender chicken thighs dripping in coconut oil, and the contrasting sweetness from the rich and velvety peanut sauce singing with a note of lime.  A shot of chili flakes if you’re on a roll, and the relentless pops and zings of pickled chilis with a squishy soft roll to mop up the mess.

Don’t let another summer pass by without. 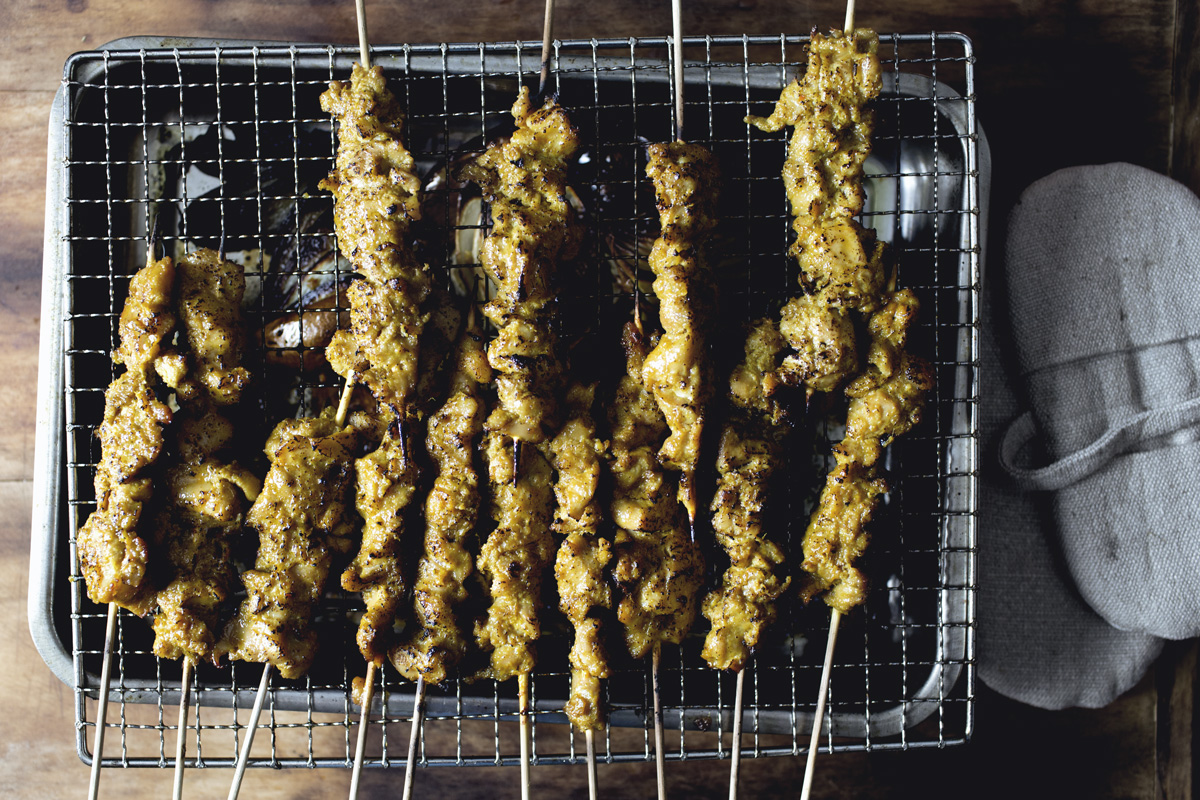 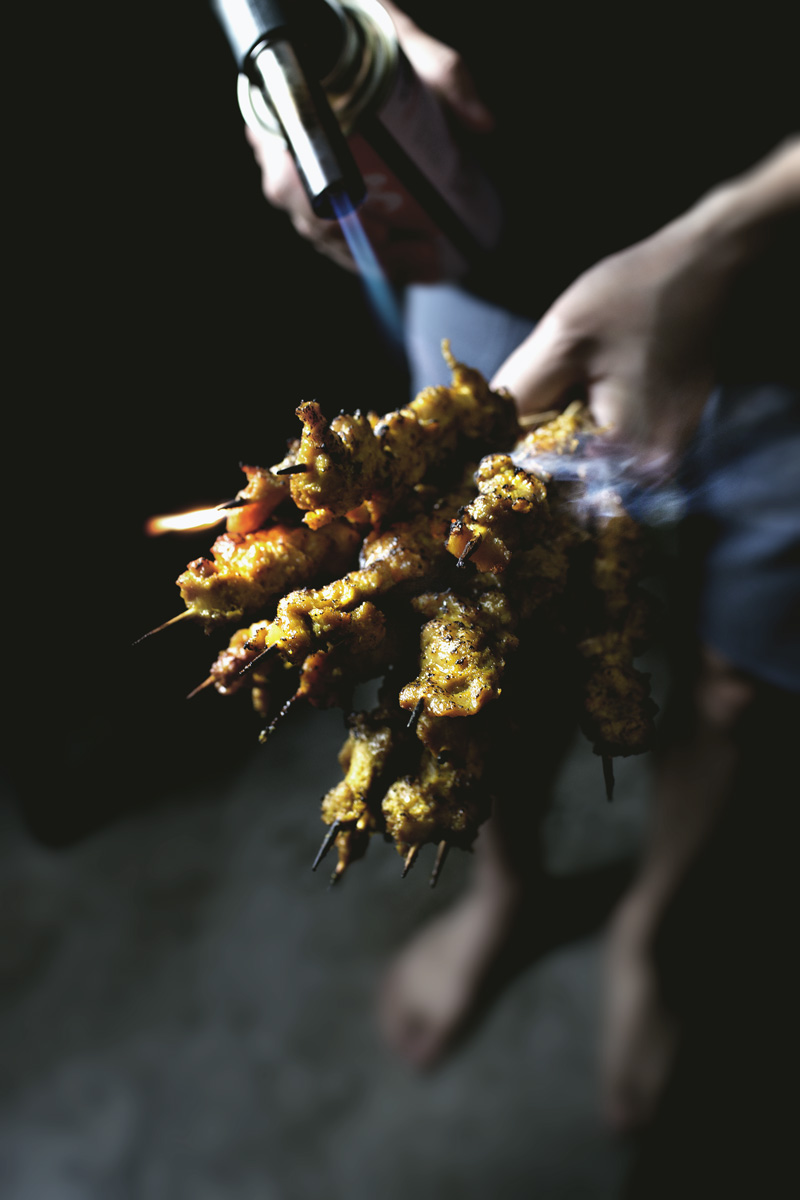 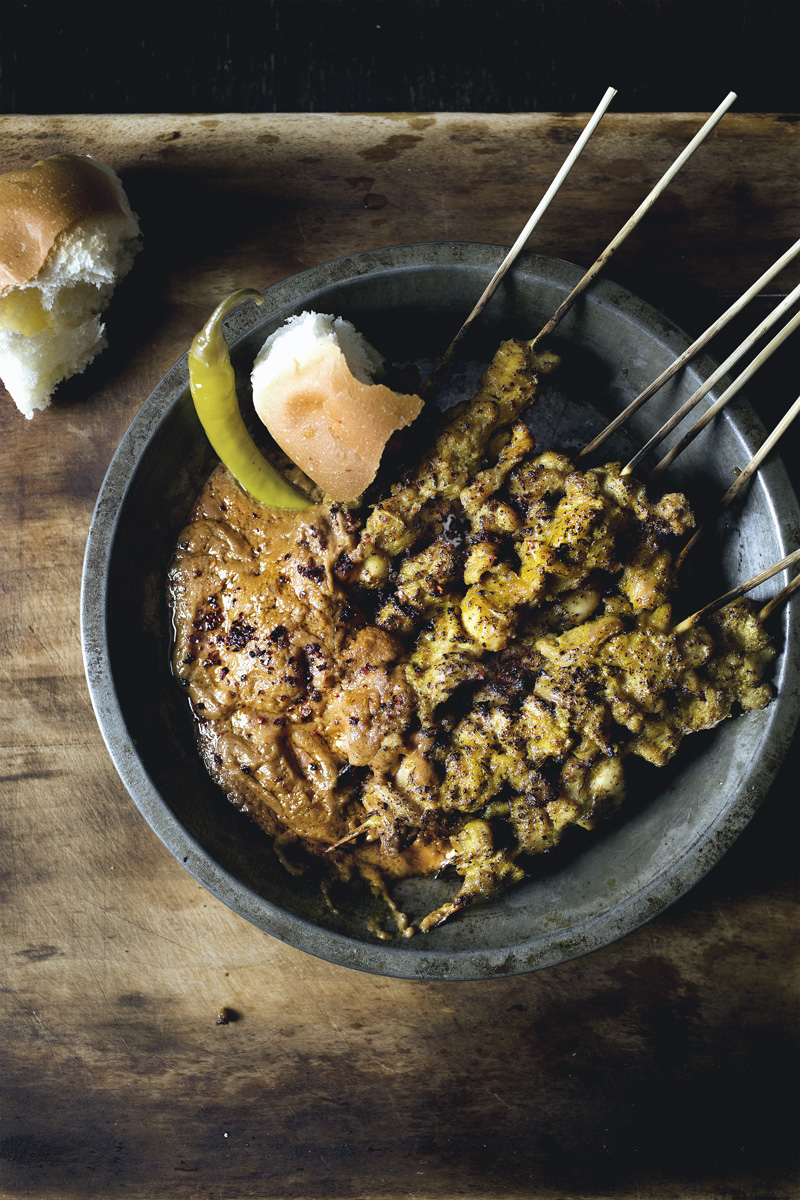 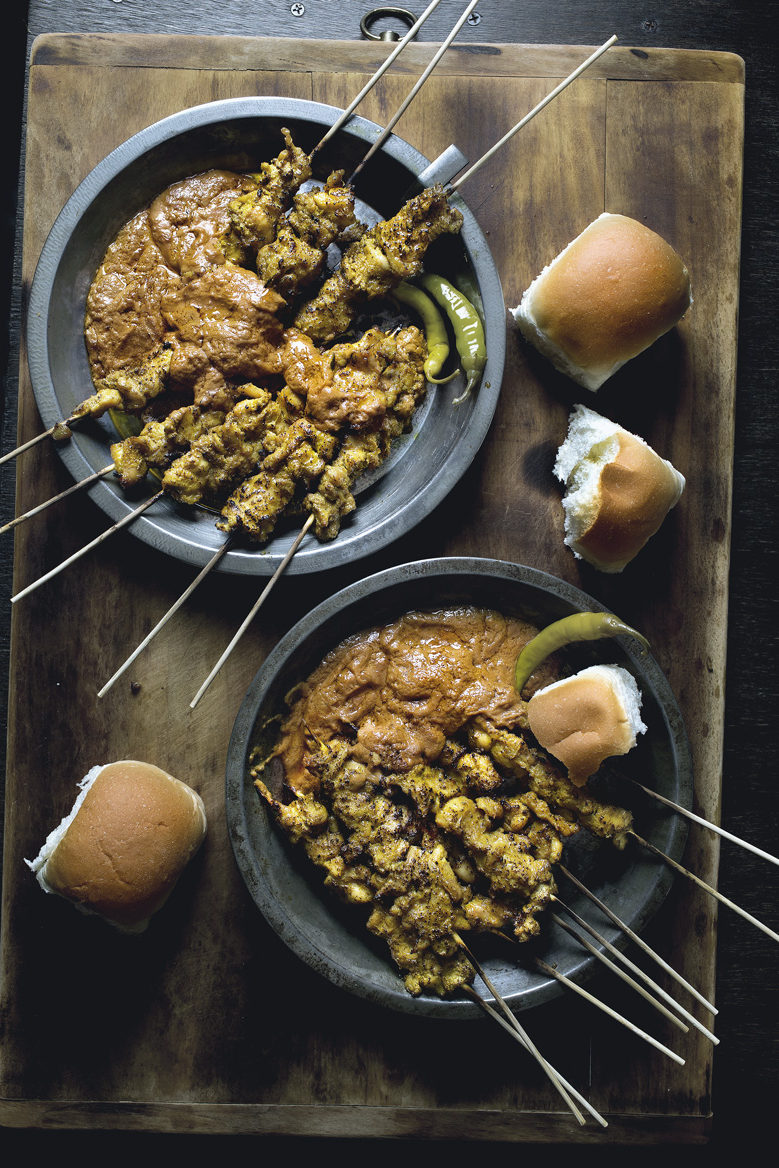 I replaced candlenut with cashew because it's hard to find outside of southeast Asia. You can can use candlenuts if you have it. 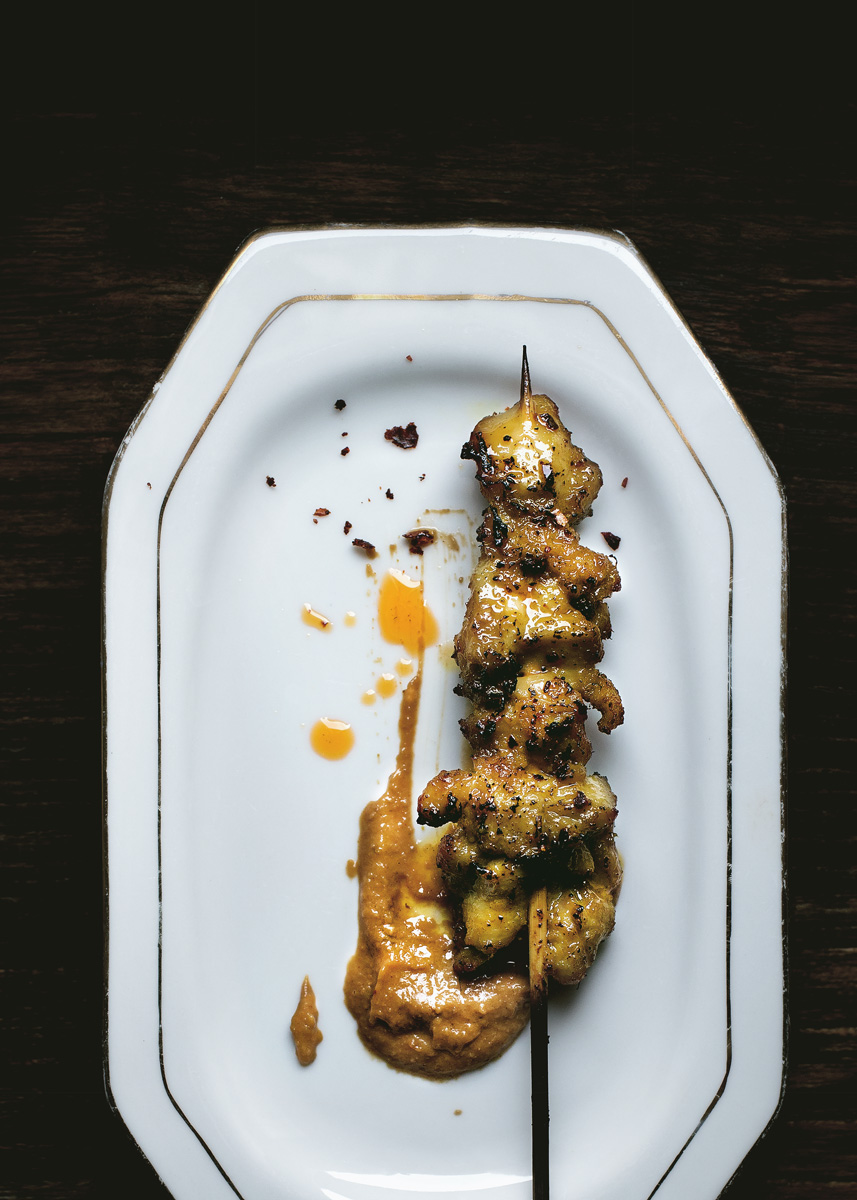