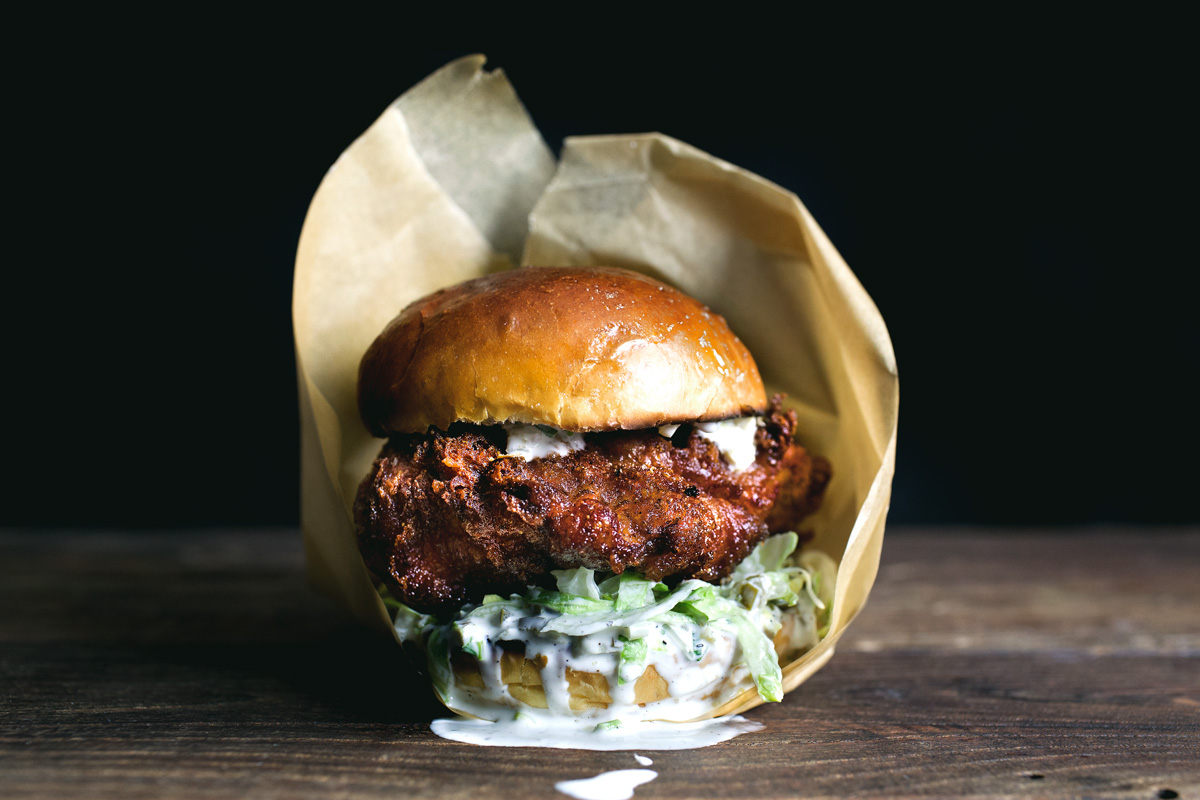 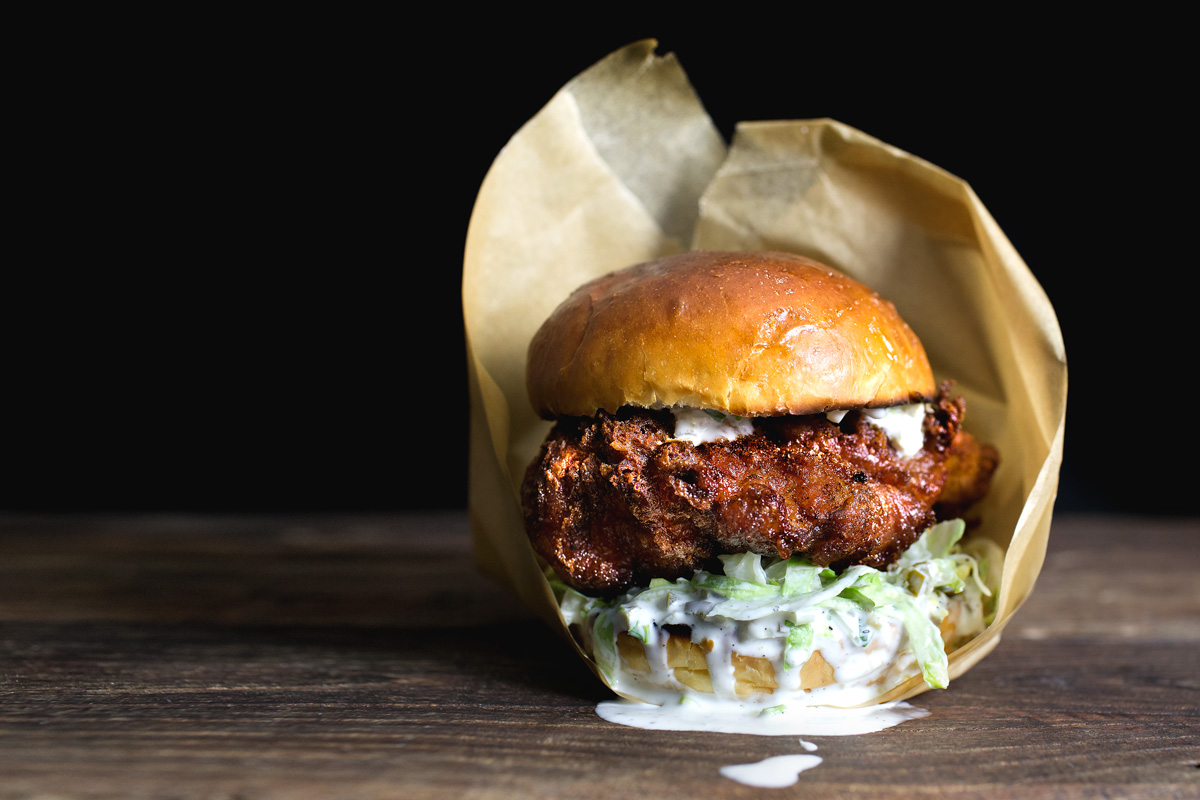 (THE PICKLING JUICE OF JALAPENO) WILL WEAVE SALTINESS, THE RIGHT AMOUNT OF ACIDITY, AND THE LIVELY SPIRIT OF JALAPEÑO INTO EVERY STRIPS OF MUSCLES, TRANSFORMING THEM INTO SUCCULENCIES THAT LEAKS SAVOURY JUICES… 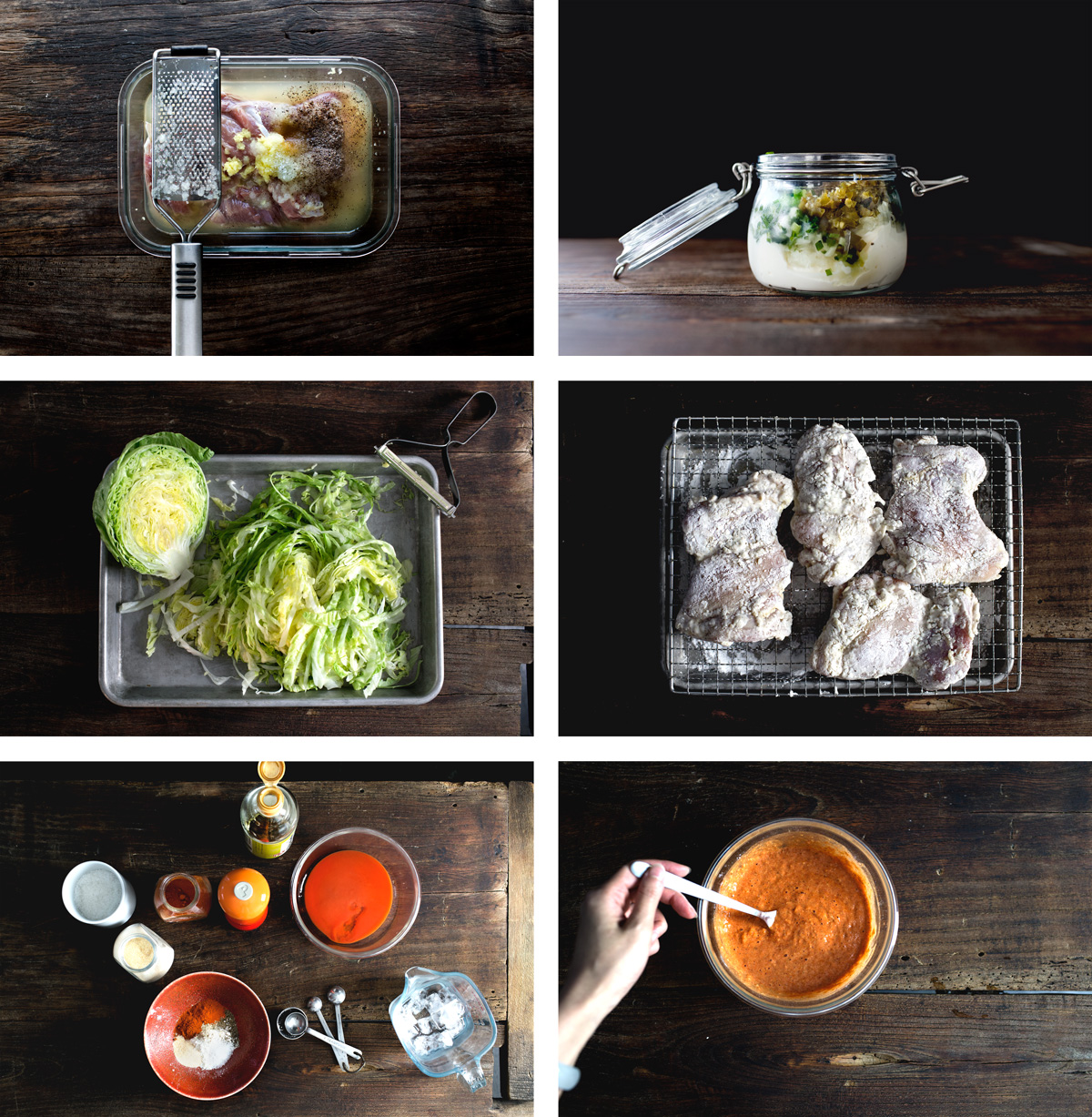 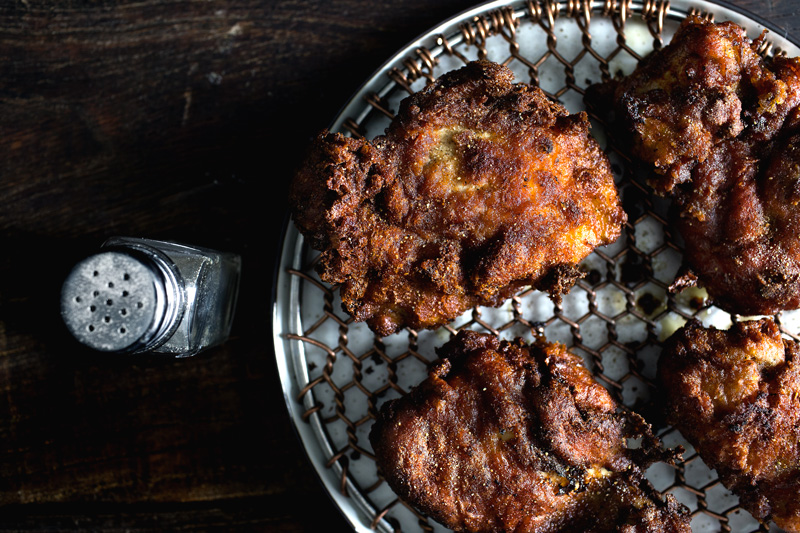 We all feel it, right? The wind is changing.

You don’t have to do much to be in the know. The signs are everywhere, twinkling strategically across the rim of lights on social medias, designed to be picked up by scavengers sniffing for fat bits. But even if you were only mildly interested in fads, or so much so as unsuspectingly reading the business section of NYTimes during an overly squeezed lunch-break… there’s still no escaping it. You would have heard it, like it or not, that as far as New York is concerned at least, burger is dead. Yes, dead, out, and over its twitching body beneath the surface of trending news, comes the unstoppably uprising aroma of soul-nurturing fried chickens being carried between two pieces of bread. Behold, a new era for the couture fried chicken sandwiches, has come.

From David Chang’s Fuku to Shakeshack’s elusive chicken shack and the other fifty shades of white-to-dark meats in between, fried chicken sandwich has finally broke free from the taboo of tiring fast food-chains, and reinvented itself as the new cool kid on the block, or at the very least, the block where it counts. Now I’ll be honest. This really makes me angry. Why does everything wonderful has to happen promptly after my departure? The High Line, the cronuts, my high school’s renovation and now this? I mean, I love fried chicken sandwiches! It’s kind of my thing! But where were they when I was right there, still looming around Manhattan spitting out dissatisfying McChicken over the sidewalk like an overly fed and self-pitying city pigeon? Where were they when I was readily unemployed, in the perfect fit for duty to stand in a line while lusting over instant feeds of trophy-images being posted by the dudes way in front of me? Where were they when I was just two, ok may be three, subway-rides and way-too-much-Taylor-Swift-on-radio away from Brooklyn and tagging myself on IG with the hottest Shack in town?

And now, outcasted and bitter, the only mean to make myself feel remotely included, I guess, is to forge my own. What would I have done, I asked myself, if I were to create a fried chicken sandwich inspired by Shake Shack’s (I’ve decided, after investigations, that Fuku is really more of a colossal fried chicken thigh-cutlet garnished with steamed buns, and that it is another subject entirely). There are basic premises that I would keep, deeming the soft potato rolls, the southern-style of batter-frying, the tangy element of a cool dressing and the classic companionship of lettuces to be, well, legit. But the agreement probably stops here. I mean, jeezes, they use chicken breasts for crying out loud, the unfounded, outdated and herd-mentality syndrome that practically murdered chicken nuggets. Well, that has to go for sure. Then, an additional element of kicks has to be introduced through two separate channels. First, the brine, or shall I say, pickling? Yes, the skinless and boneless chicken thighs are soaked for several hours in a mixture of grated onion, ginger, salt’n pepper and most importantly, the pickling juice of jalapeño, the most wasted ingredient in the kitchen pantry. It weaves saltiness, the right amount of acidity, and the lively spirit of jalapeños right into every strips of muscles, transforming them into succulencies that leak savoury juices even after the necessary frying-time to crisp up the coating (quick tip check out chicken breast in air fryer recipes to get the perfect crispiness). Speaking of coating, the second channel for introducing kicks and flavours, will be a batter made from sriracha sauce. Yeah, I mean, why not? It’s there for your taking, so take it. Now the only things left to bring it all together, is a hot and cool dressing made with finely chopped pickled jalapeño, herbs, mayonnaise and thick plain yogurt.

It’s big. It’s guilt-filled. It shatters in between bites, making ways for the juices to flow through, savoury and tangy, hot and cool at the same time. You’ll probably need a nap after this, and dream about having another one in the nap. But don’t feel sorry, because make no mistake about it, that everyone else is doing it, too.

The handmade embroidered plate is from Dishes Only. 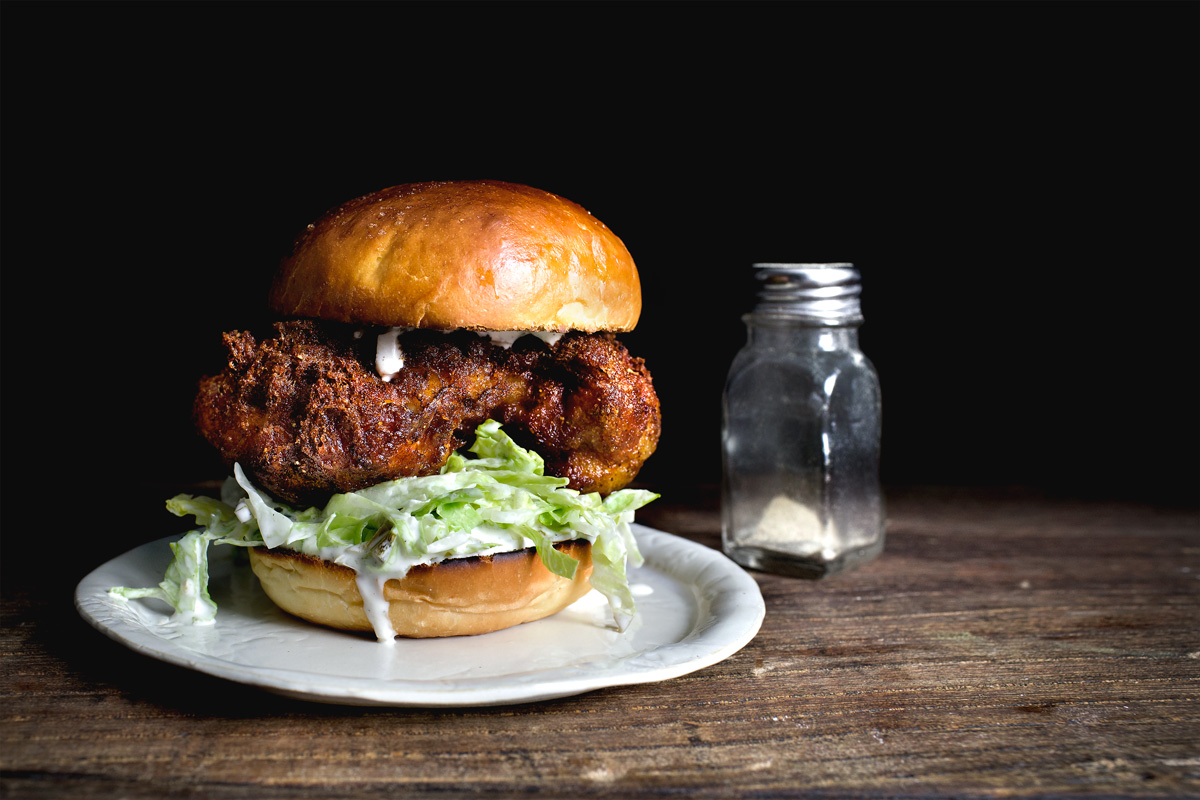 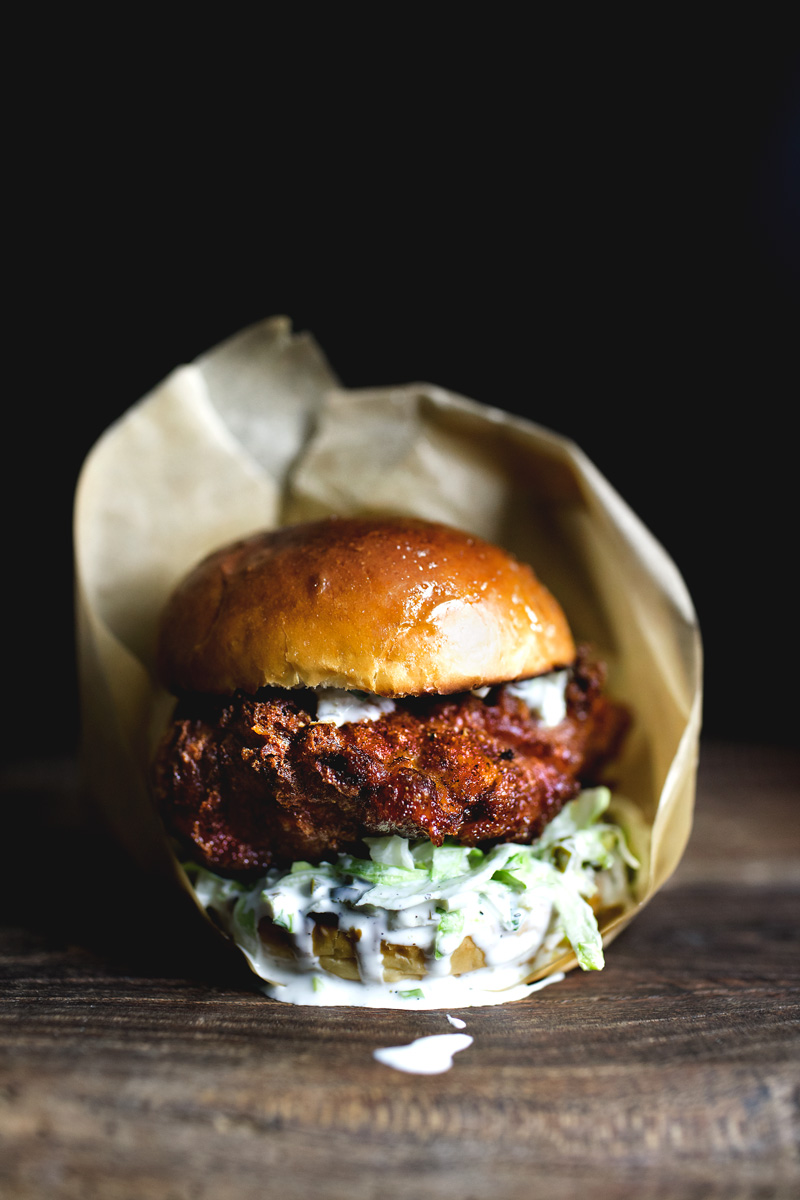 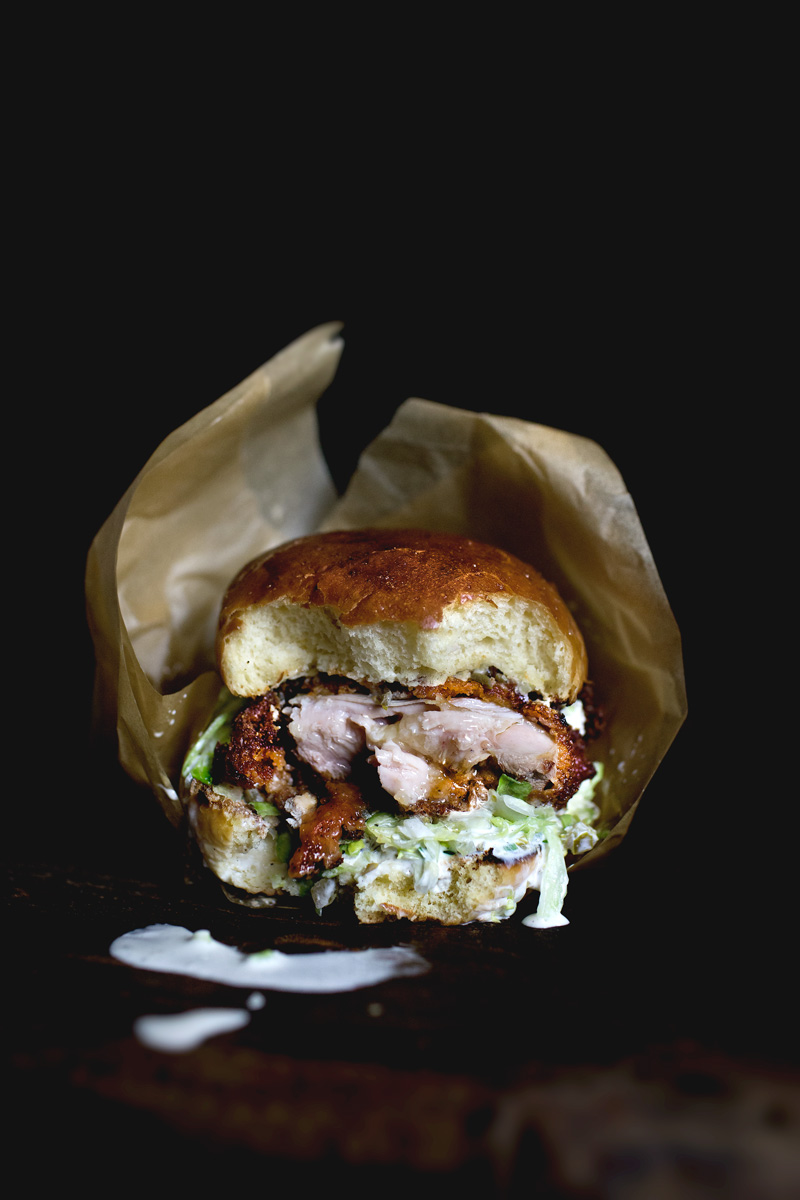 CHICKEN AND BRINE:
JALAPENO YOGURT MAYO:
SRIRACHA BATTER:
FOR FRYING AND TO FINISH:

I like dark meat. But if you must must have white meat, you can substitute with chicken breasts for the recipe. 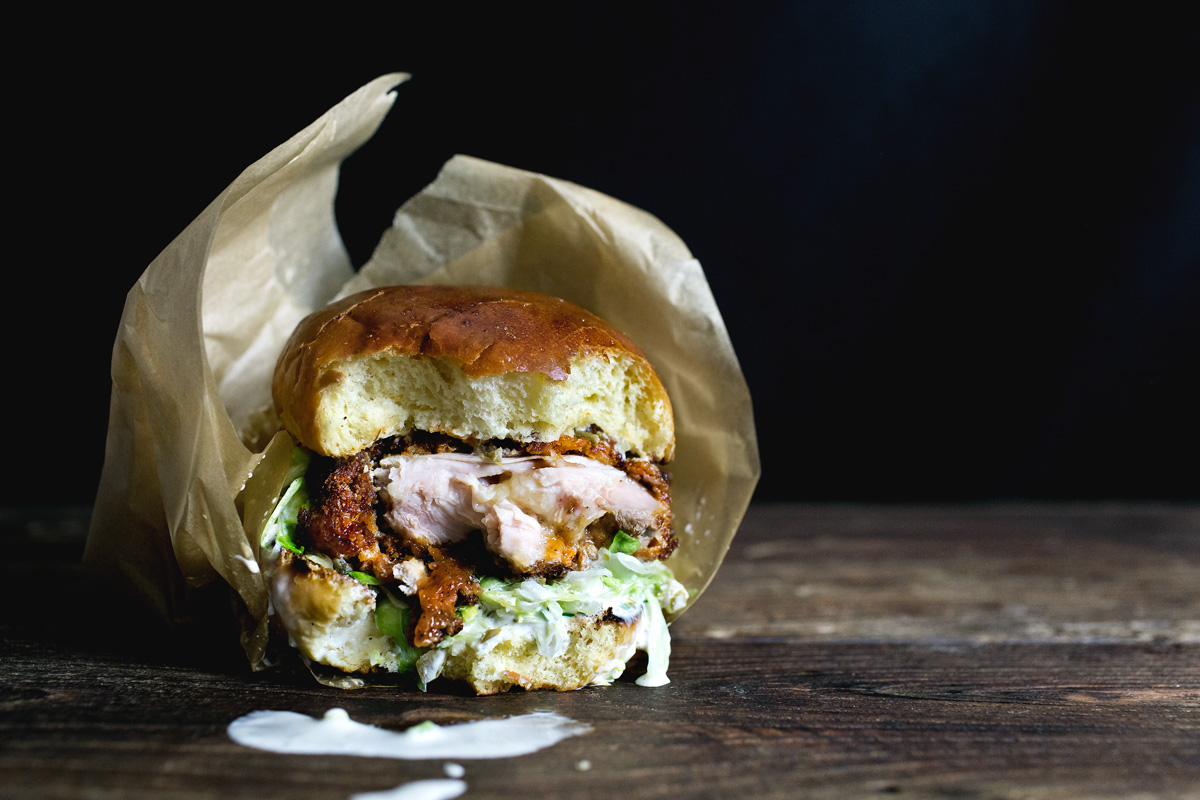