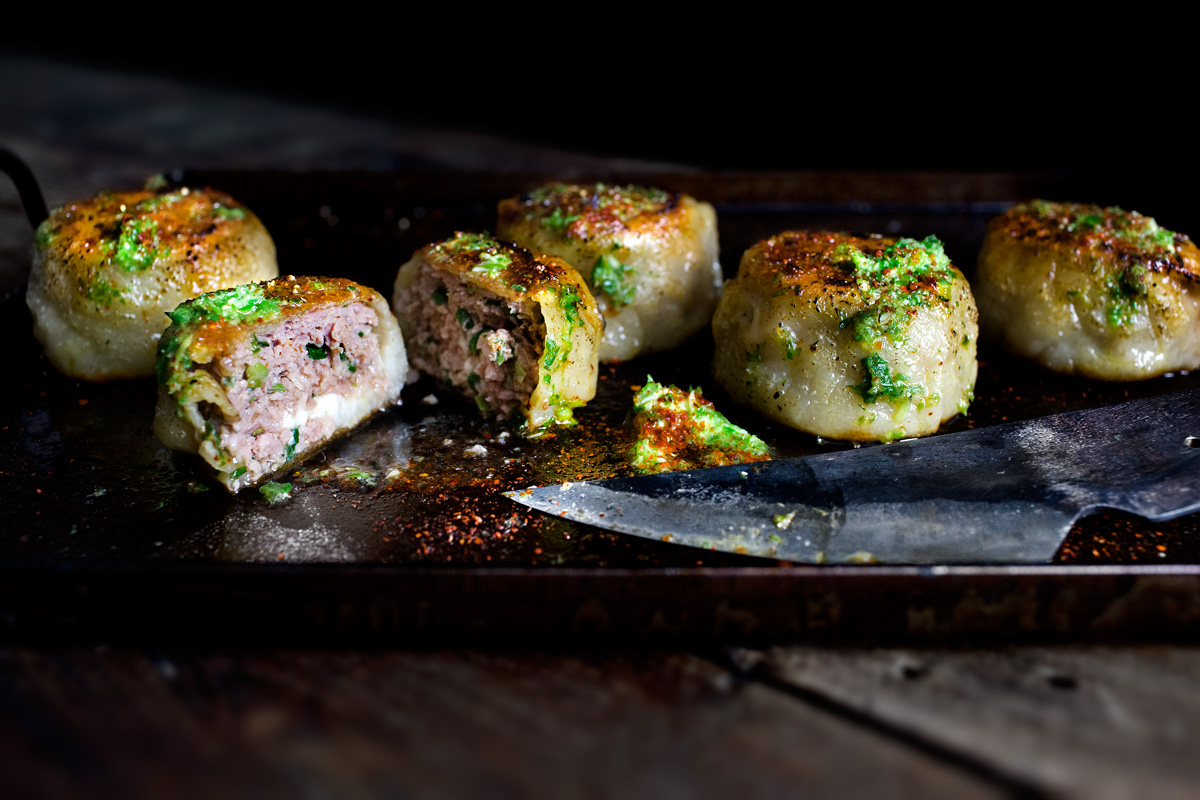 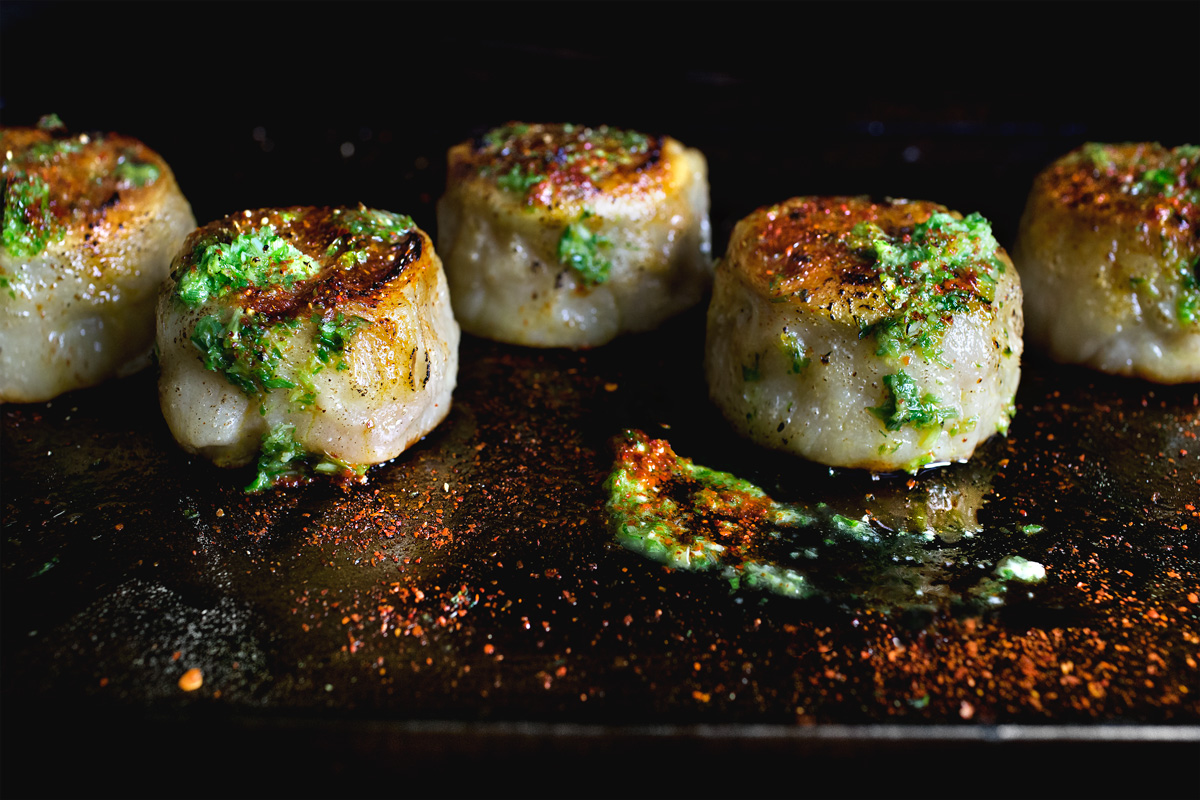 DOESN’T IT HELP YOUR CONFIDENCE IN MAKING THESE IN YOUR OWN KITCHEN, KNOWING THAT THEY AREN’T IMMORTALS,

THAT THEY TOO BLEED JUICE, JUST LIKE THE REST OF US.

To most people who aren’t born or raised in China or any of its politically disputed subparts, the idea of cooking Chinese cuisine, I guess, can feel intimidating.  For one, it sounds big.  And it is big.  It is big in a sense that it’s actually less confusing to approach it not as a generalized whole, but as a ccoalition of many different regional representatives.  The food cultures in the north, really is a world away from the south, and from the east coast-lines to the west high mountains, vice versa.  And to make matters more complicated than say, how it is in America, in the best as well as the worst sense, the gaps between regional cultures aren’t yet as erased by modernization and technologies as we speak.  So if you think you’re scared about making southern dim-sum simply because you aren’t Chinese, know that there’s someone else born and raised in northern China, who feels just the same.  But I’m not saying this to scare you.  I’m saying this to let you know that, yes, while there is real deep stuff to be sorted out in the study of Chinese cuisine, it is also just as important to know that a lot of it, is actually just bullshit.

Now, this is the first mental fortification you should master if you want to tackle this massive beast, knowing its bluff, knowing that a lot of the seemly variations in its dishes are just the smokes of admirable marketing campaigns.  For one example, when it comes to the dazzling and curious case of unleavened meat pies (where the dough is without yeast), besides their shapes and sizes and minor variations in flavours, I’m afraid that the only clear difference, like many other dishes I might add, lies within the fabrication of their biographies. 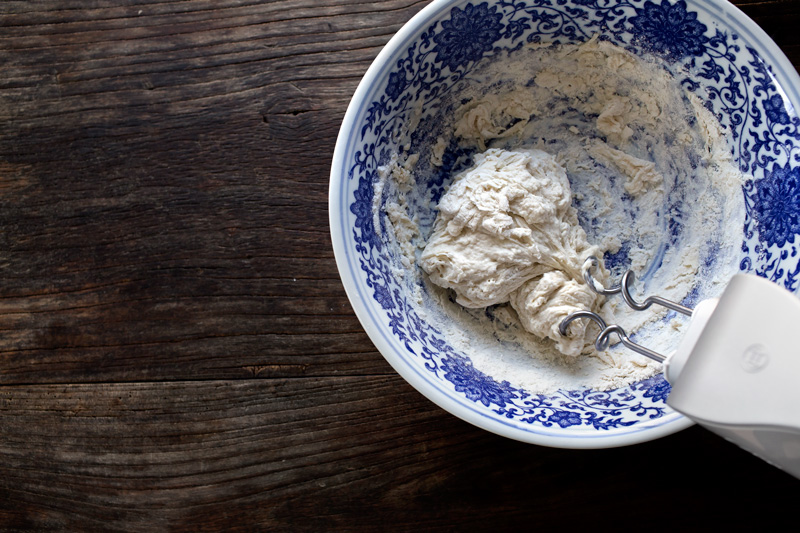 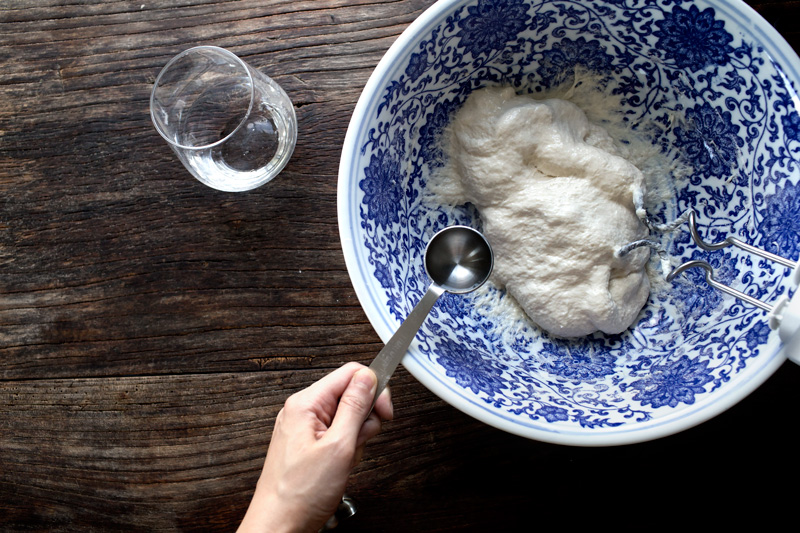 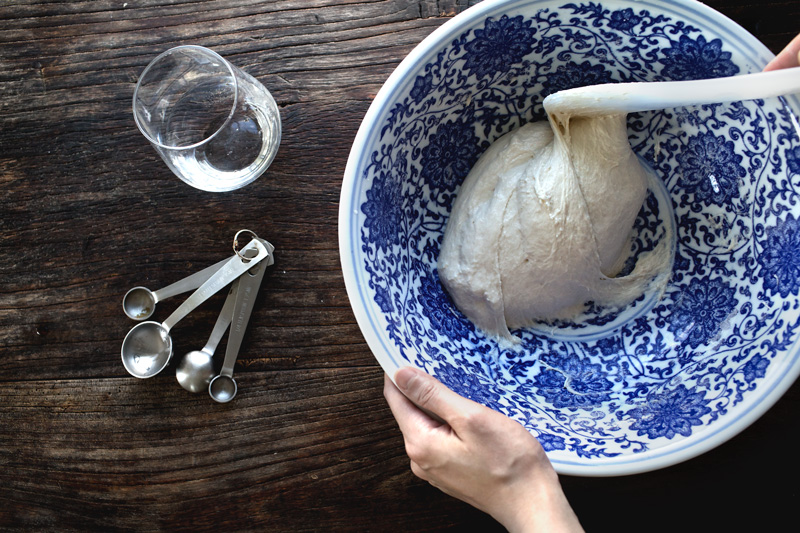 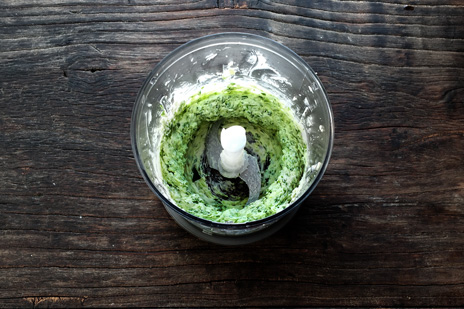 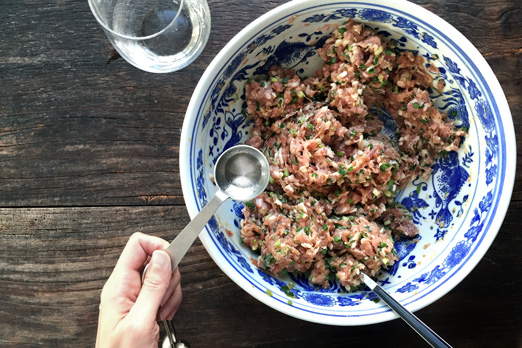 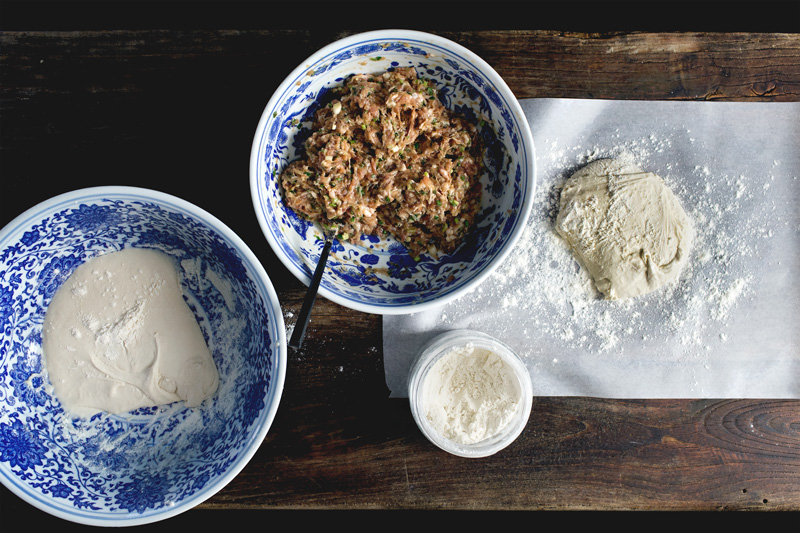 Chinese likes to dream up mystical background stories for their culinary legends, much like the way how people love to believe that Apple began humbly from a pile of junks inside Steve Job’s garage.  And speaking of whom, now I think about it, these stories almost always circulate around some kind of emperors (or empresses) just as well.  Take these two for example, the most common types of meat pies that can be seen all over the streets in Beijing, the large and flat xiang-he (fragrant river) meat pies, and the small and stubby men-ding (door nail) meat pies.  Both are made up with a thin layer of soft and unleavened dough that’s stuffed with ground beef filling (or pork if you’d like) seasoned with dark soy sauce, toasted sesame oil, blah blah and all the usual suspects.  But what really makes them stand apart from each other, flavourfully speaking if any, is of course, the legends.

The legend has it, that one day in the year of 1770 (specification is the key to a believable bullshit), the Qian Long emperor of the Qing dynasty, disguised as a commoner (so he didn’t startle the peasant girls, obviously), travelled to the region of the fragrant river xiang-he and walked into a local joint famous for its meat pies (because the emperor ate what the people ate).  He, or one of his disguised entourages ordered the meat pie, and upon the second bite (after the poison-tester took the first), the emperor was stunned by the unparalleled deliciousness coming through this humble commoner’s food (I suspect because he only had shits to eat in his grand palace).  He immediately demanded for his awesomely cool calligraphy tools and left a little poem right then and there (the emperor liked to immediately write down whatever that occurred to him because he cared too much), “Xiang-he has this magic pie, the cook owns his wonderful skills.  A meal at this very joint, non of the others can fulfil. (the emperor didn’t have to be good at poems.  he was the emperor.)”.  And just like, boom, the xiang-he meat pie was born, and exploded in popularity across the country.

But the men-ding (door nail) meat pie is not gonna go down without a fight.  The legend has it, that one day the imperial chef of The Forbidden City made a peculiarly shaped meat pie that was 6 cm wide and stood 4 cm tall (nobody in China had ever imagined such ingenuity), and served it to the Empress dowager of the late Qing dynasty, Ci Xi (probably the most resented, hated, blackened, evil political bitch of the entire Chinese history).  Upon her first bite (as always), Ci Xi was impressed by the dish (and believe me, she didn’t get impressed easily) and asked the imperial chef for the name of the meat pie.  The chef took a few seconds (probably peeing his pants at the moment from the fear of being beheaded if he didn’t have an answer), and thought the shape of the giant metal door-nails on the wooden gates of the palace, really resembled his creation, so he answered, “It’s men-ding (door nail) meat pie”.  And just like that, the men-ding meat pie was born, and for no reason in particular, forever symbolizes peace and prosperity (doesn’t everything).

I mean let’s face it, non of that ever happened, probably just endorsements the restaurants made up to sell the customers meat pies, either flat and wide or stubby and tall, that practically makes and tastes the same.  So you see, a seemingly confusing and intimidating variation of Chinese meat pies, demystified.  I for one, prefer the door-nail meat pies.  It’s got a nice ring to it.  But doesn’t it help your confidence in making both of them in your own kitchen, knowing that they aren’t immortals, and that they too bleed, just like the rest of us.  In fact, they do bleed, squirt actually, if not careful, of scorching meat-juice that runs through their pressed skins that are crispy on the top and bottom, but soft and delicate on the sides.  The ground beef filling teeming with diced scallions, are bouncy and almost succulently juicy, outweighing the wrapper in mystical proportions.  But why stop there?  Why not make a new legend?  A good nub of pureed scallion and ginger butter is then smeared and melted all over the top, announcing a new chapter in its ever evolving story.  The legend has it, that when I rubbed the scallion butter over the hot crackly pie-surfaces and watched it encase slowly, and ever so mesmerisingly, down and around the edges of my creations, I saw the fiercely green jade bangle around my left wrist and was bewitched by the resembling beauty…  Right then and there, I took my sharpie and wrote down on a napkin tinted with watermelon juice…

Just like that, the jaded (pun intended) door-nail meat pies rubbed in scallion butter, was born, and forever symbolizes truth and the needlessness for bullshits when it comes to making good foods. 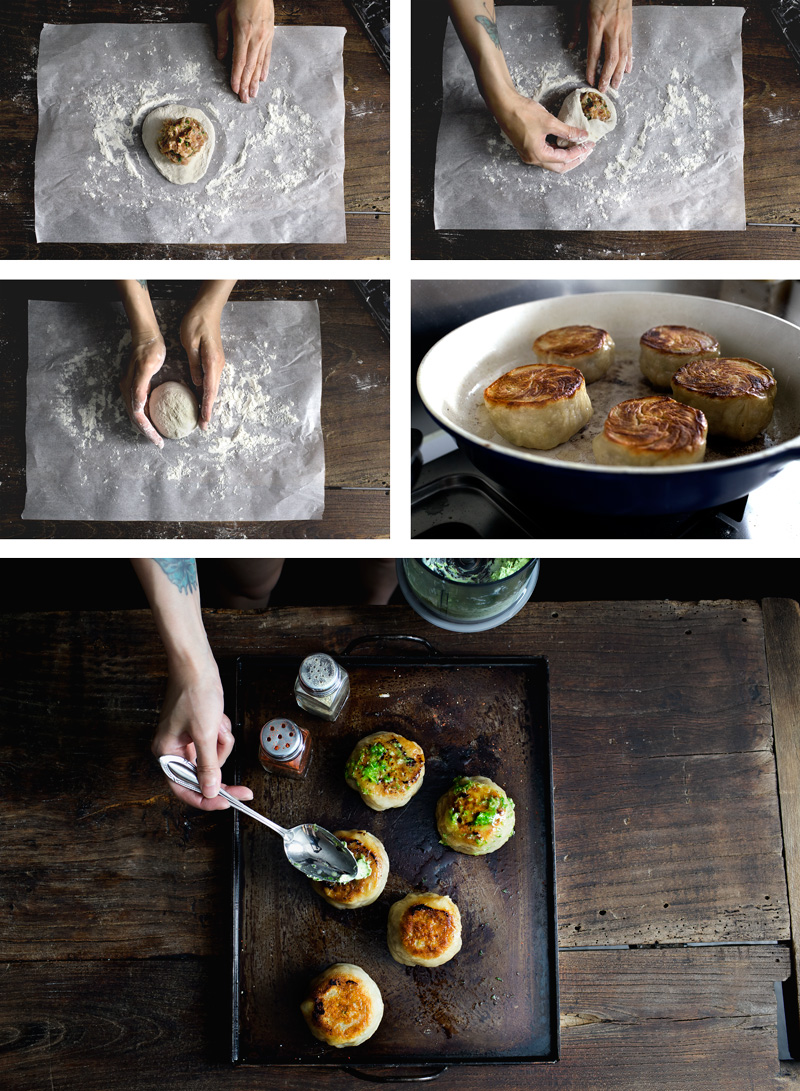 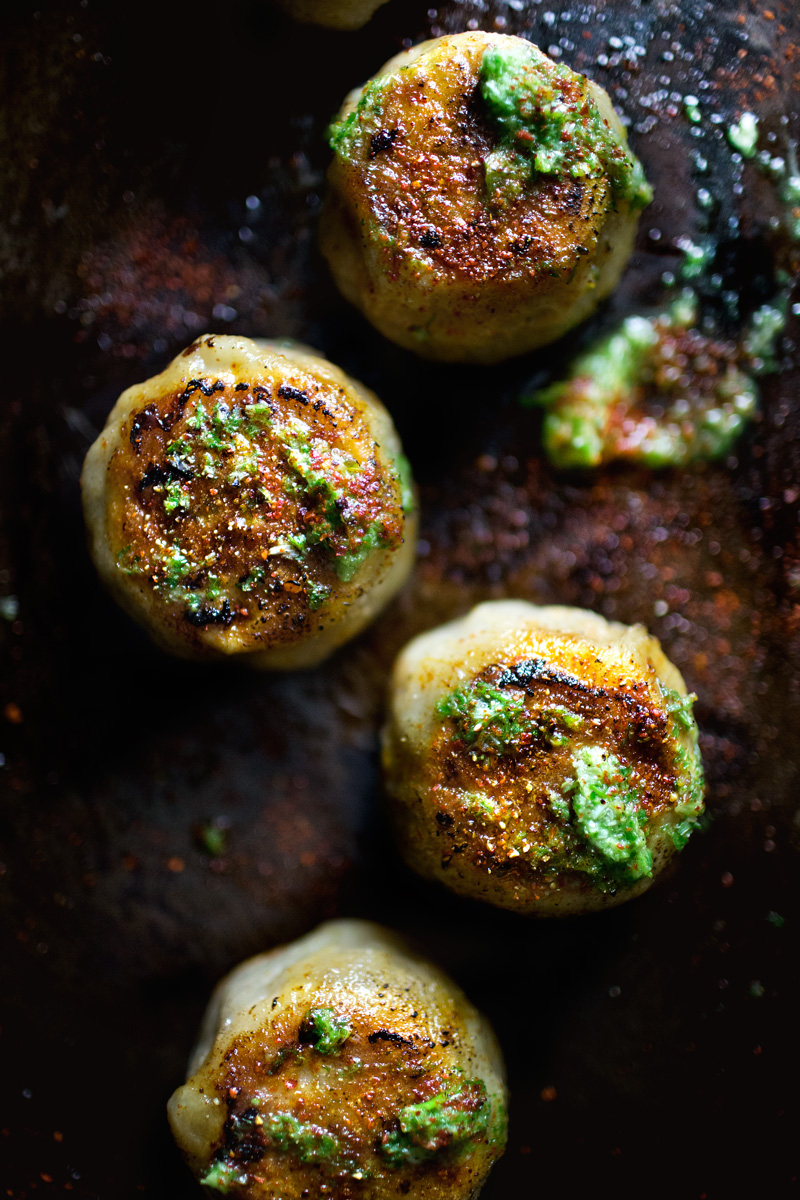 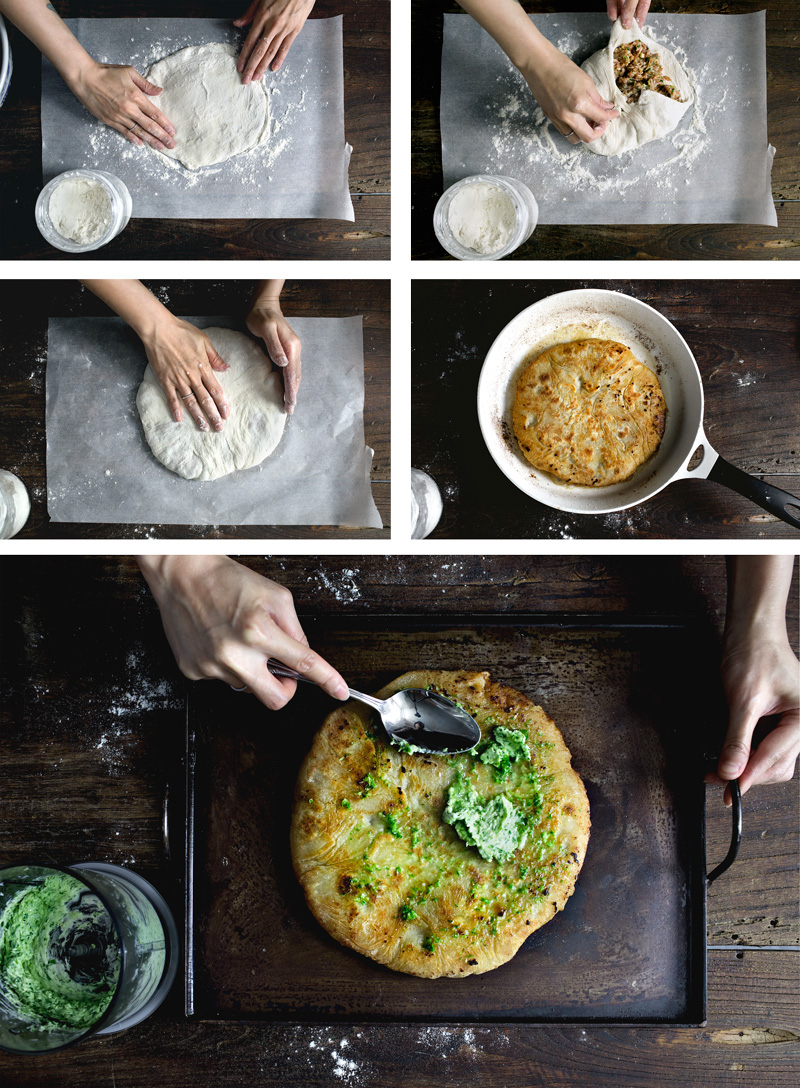 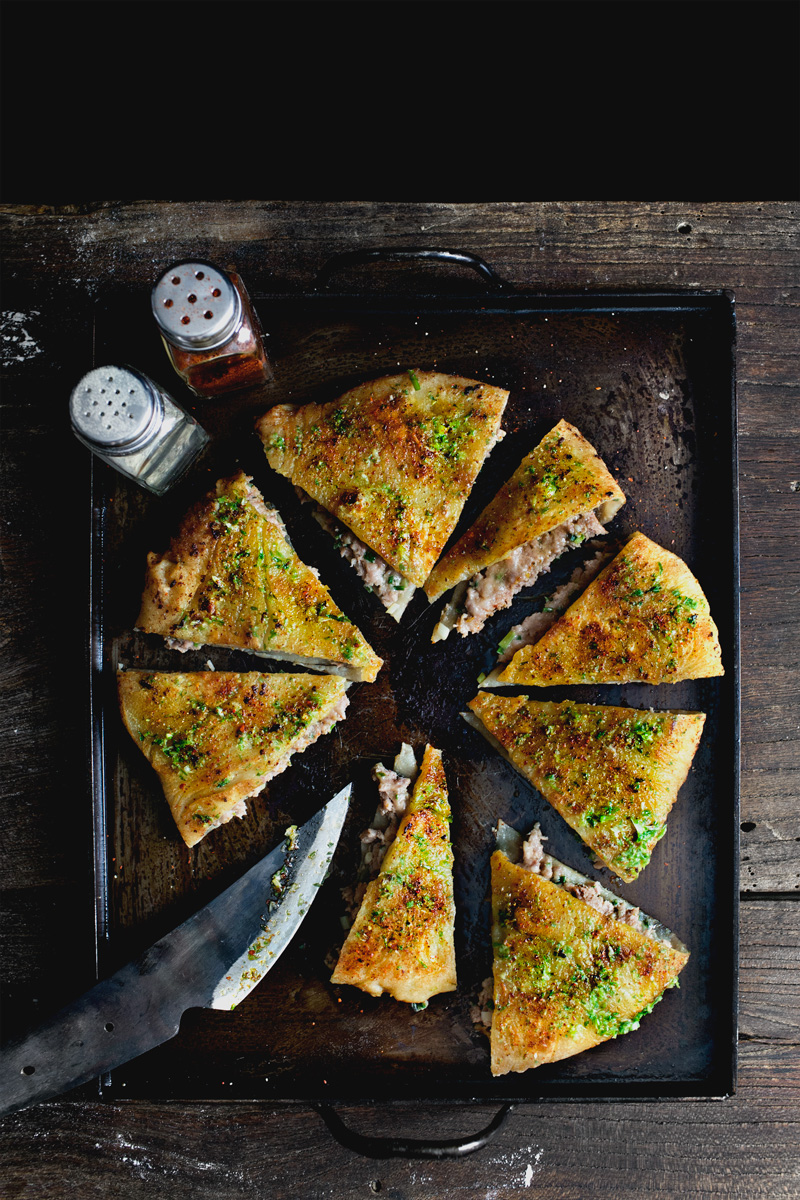 THE DOUGH:
PORK AND SCALLION FILLING:
SCALLION BUTTER:
TO SERVE:

I ran out of dark soy sauce while making this recipe, but if you do have it, use 2 tbsp dark soy sauce and 1 1/2 tbsp regular soy sauce. It will give the filling a better color.

The door-nail meat pie, compared to xiang-he meat pie, has a higher meat ratio and more juice, which I prefer. 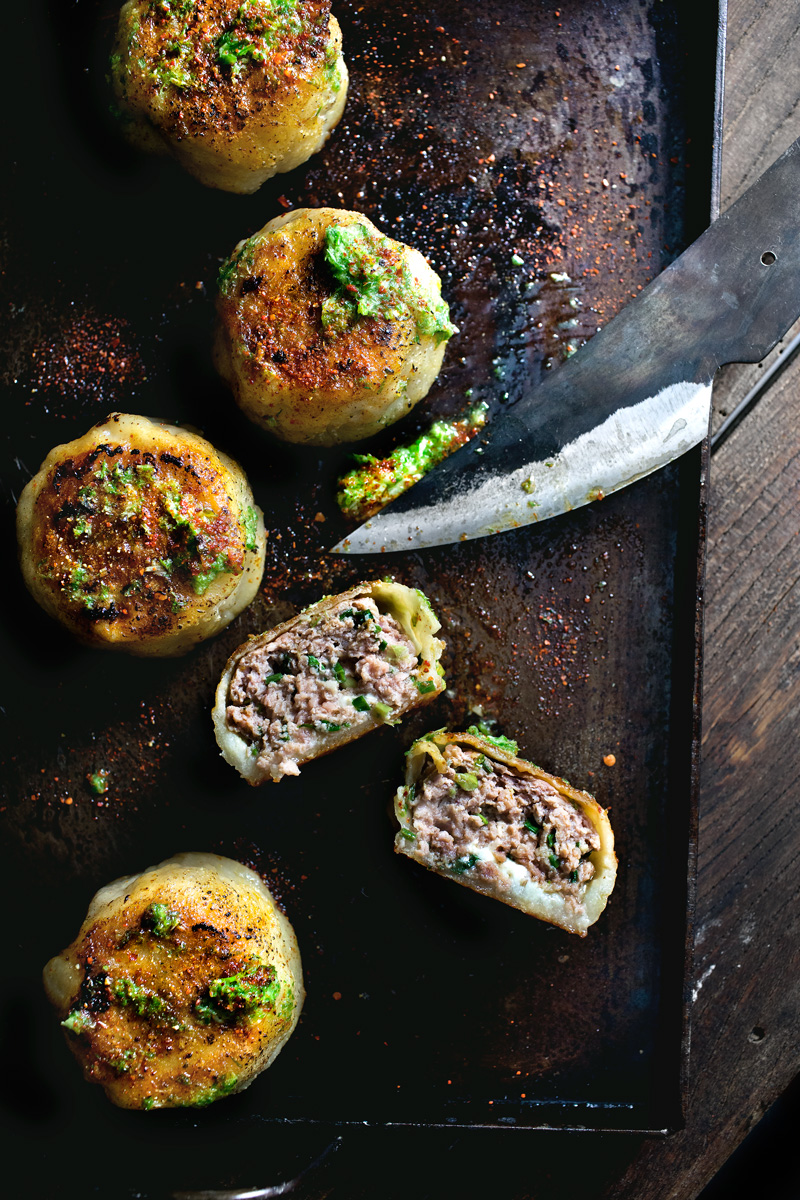