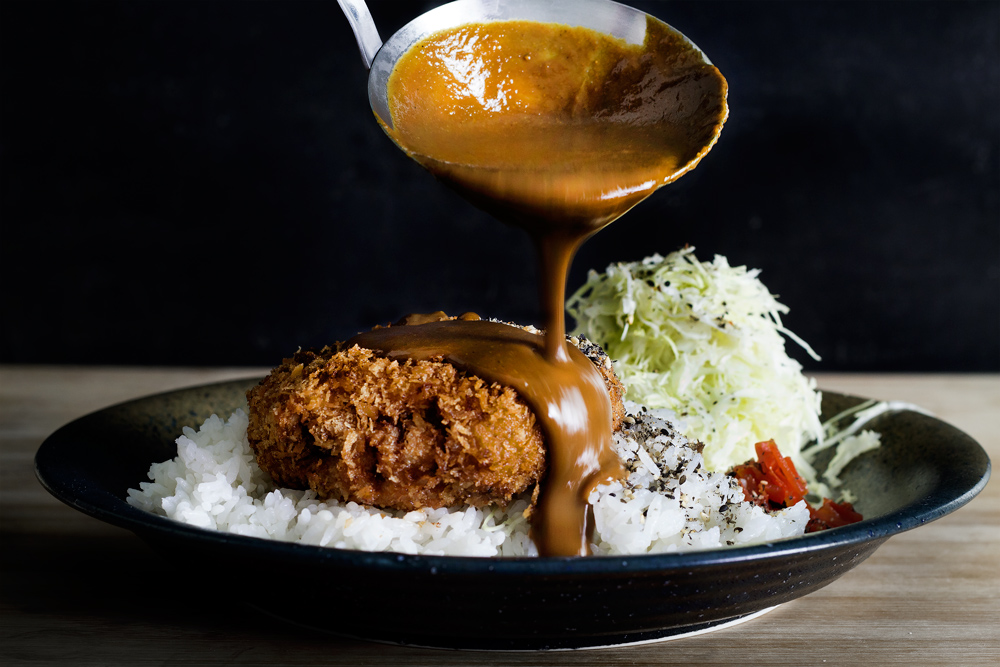 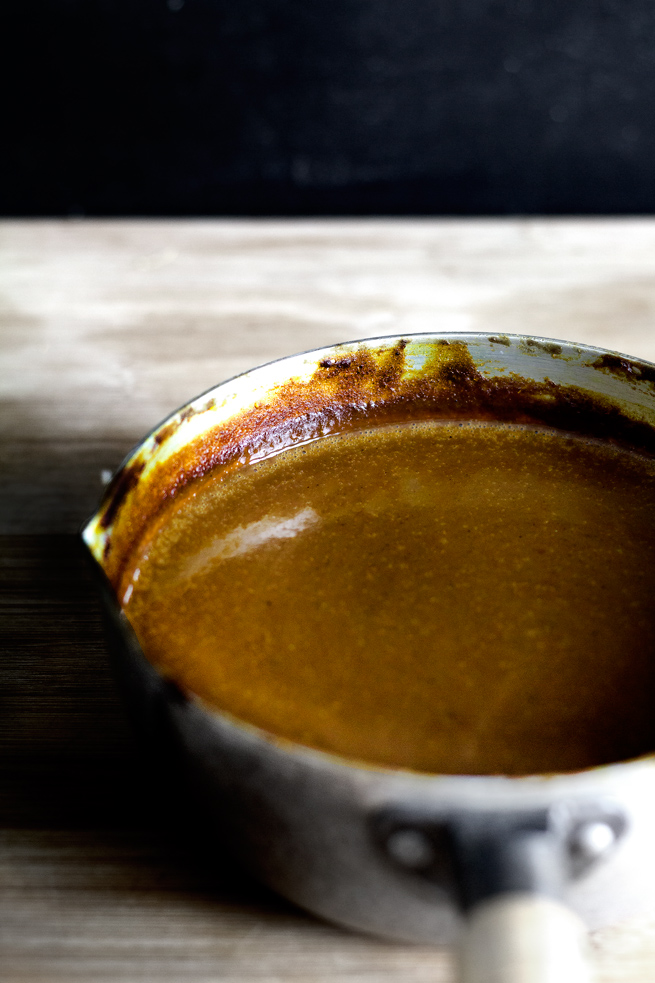 BEING not quite a licensed psychologist but more of a serial psycho-analyzer, I believe it must mean something, whether wishfully cute or symptomatically alarming, when your husband starts to lie to you about… what he had for lunch. I mean it must…

I’m not suggesting anyone to panic if similar clinical signs start to emerge in your marital routines or relationship. Because based on my own study – lasting 6-plus years since the first, then constant episodes – the impact on the delicate harmony of nuptials isn’t exactly dire, but nonetheless, worth further investigation. To continue, I guess I have to present the evidence of its first symptomatic appearance…

Back in the years when we were still in New York, for the longest time I was made to believed that in the barren wasteland far-far-away called “the financial district”, more often than not, poor he had to survive on a “very small cup” of Korean stew from a corner-deli (holding out both of his thumbs and index fingers to form a tiny circle) with an unfinished small bowl of steamed rice and kimchi. Shoulders hunched and holding my sympathy hostage, his unspoken demand for a more nourishing dinner were usually met without any challenge. Little did I know… until the first time I finally met him for lunch… The alleged “very small cup” turned out to be a venti TUB! That amount can feed a Victoria’s Secret model for a month on her best eating days! From then on, I take his lunch answers – “a few bites on a 6″ cold-cut subway and 1/2 of an oatmeal cookie”, “a small steamed bun with a little side of sautéed pepper and beef, but very little beef”, “a box of noodle that I ate half-way… only”, “zucchinis…”, “NO lunch” – with the scars of the deceived. Who the hell knows, he could’ve sexed cheese burgers raining down with confetti then washed’em down by a keg of dark ale and instead just said, “some sliders at happy hour”.

But these were not the most shameful episodes you see. The siren of his guilt-driven lies only sounds louder when all specifics are avoided, with just the misleading type of restaurants given…

“What did you have for lunch today?”

METHOD 1:
TO FRY WITH FRESH PANKO

SERVE WITH:
THE QUINTESSENTIAL SHREDDED CABBAGE

Now, when we, the normals, think of a “Japanese Lunch“, clean and vibrant images of sushi or perhaps at the most, soba noodle in a clear broth emerges in perception. When Jason, the half truth-er, says a “Japanese lunch”, he means this.

It is an abomination warped by one of Japanese’s many talents, to adapt foreign cuisines by rendering them unrecognizable. Deep-fried XL hamburger croquette in an elaborate panko breading, doused with a pond of lava-like Japanese curry sauce with the leading ingredient as “clarified butter”, then over a bed of Japanese short-grain rice with a defensive pile of shredded cabbage and pickles.

It’s a brilliant creation. The sole intention of such item being offered in the lunch-menu, in an area dominated by business activities, is to cripple the very structure of any work-force and reduce thinking minds into bricks of day-old gummy oatmeals in the afternoon that follows… A neo-modern Japanese invasion. But just when I thought we’ve left this ill-willed restaurant behind in Hong Kong, a brand new clinical side-effect has surfaced in the last couple weeks, and I’m not sure what to make of it yet…

It’s no excuse but I suppose it’s triggered by the frustration of eating at a restaurant in Beijing a couple times that specializes in tonkatsu (pork loin cutlet). The place is generally adequate with one-eye-closed, but however, committed 2 highly lethal mistakes that killed Jason’s highest endorsement. A) They do not serve menchi katsu (hamburger cutlet). B) Their so called kare (curry sauce) is a watered-down, blonde-ish fluid that would infuriate any kare-enthusiast. So as if he has broken through a mental threshold within himself, 2 weeks ago, he finally asked.

“Can I… should we… Can we please make minchi katsu kare at home?”

I couldn’t deny him of such courageous request could I? I mean after all, more than a decade of togetherness is no joke. I know exactly what he wants, and exactly how he wants it. An extra thick and juicy minced beef-patty flavoured with finely minced onions and worcestershire sauce, double-breaded in fluffy and lace-like panko then fried to the meticulous, perfect shades of deep golden brown-ness. The futile attempt to lighten up the dish by baking the hamburger croquette with pre-baked panko was immediately discarded by the man whose eyes no longer reflected sensibility (but perhaps you still can).

Then of course the equally, if not more important component of this ensemble, is the crème de la crème… the King’s jewel of Japanese curry sauce, with extra dark seasonings of pureed fruits and spices, plus the final coronation of melted bittersweet chocolate. It has the same complexity as a bottle of wine that only gets better as it ages, a concoction that would make anything, let alone another absurdness as hamburger croquette!, tastes like heaven on wheels. The quintessential paper-thin shredded cabbage, which may seemed at first as nothing more than a defensive argument against overindulgence, turns out to be a much needed compliment especially paired with a tangy sesame dressing.

As I watched him devour 1 1/2 XL hamburger croquettes with continuous shelling of curry sauce, then the next day, an instant texted image of a licked clean lunchbox with a blunt “zzzzz…” caption, I realized a marital milestone has been reached… a romantic page turned. The beauty of true intimacy and honesty has trumped all fears of rejection, following in-bed farting, brought us to this moment when… he no longer gives a fuck about shame.

I believe this must also mean something, whether wishfully cute or symptomatically alarming… that awaits further investigation. 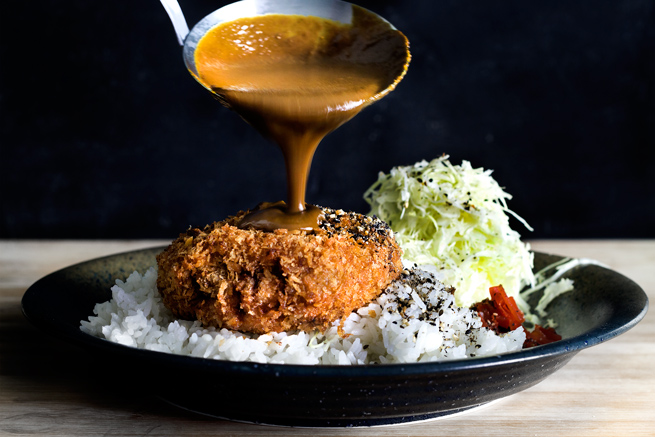 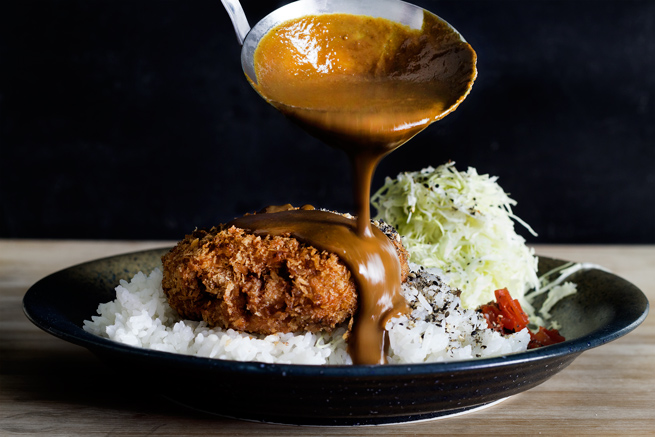 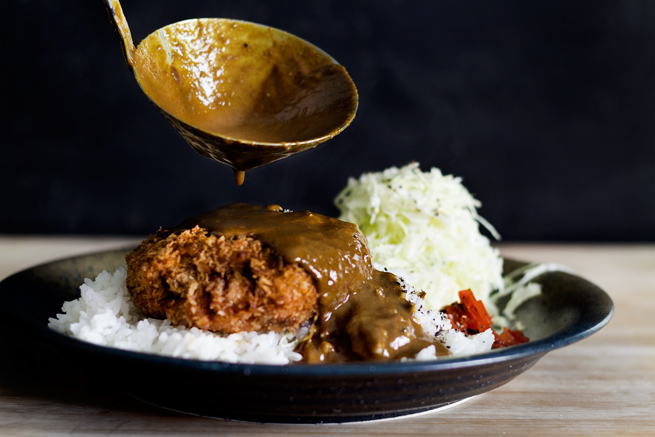 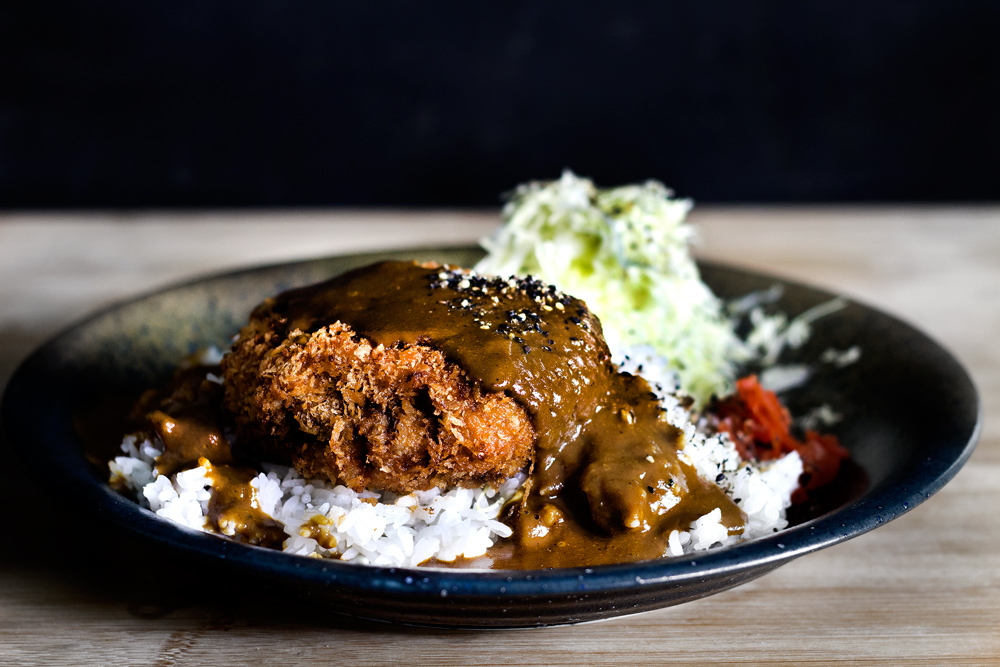 * Japanese curry cubes is a semi-processed blend of spices, thickening agent and fat, aimed at producing quick, thick and smooth curry sauce which has become a truly unique icon in Japanese cuisine. To adapt to Japanese palette, even the kinds listed as “less sweet” and “spicy”, their flavours tend to be on the sweeter side compared to traditional Indian curries. I like to use the kind that’s labeled as “less sweet/spicy” (or you’ll see these characters: ??), which is darker and more robust in flavour, then I later on add pureed fruits into the mix to control the sweetness as how I like it. Additional flavour-boosters, such as chocolate or sometimes coffee, are also common. If you’re using a sweeter variety of curry cubes (you’ll see this character: ?), I would suggest using unsweetened coco powder (instead of bittersweet chocolate) to avoid over-sweetening.

The baked croquette using pre-baked panko (inspired by this month’s issue of Martha Stewart Living), although texturally not as crispy as fried, is still a good alternative if you’re looking for a fuss-free meal. The juices released during baking may cause small, soggy spots on the crusts, but the overall crispiness of pre-baked panko (at least in my case) is generally intact.

Can be, or recommended to be prepared the day ahead.

Blend/liquify the diced onion, garlic, ginger and apple (or pear) in a blender until smooth. Add the mixture and unsalted butter to a sauce pot and cook over medium heat. Cover partially (it splatters) and stir every few minutes, until the mixture reduces 1/2 in volume and starts to caramelize on the sides/bottoms of the pot, approx 10 min. Scrape off as much browned bits as you can and continue to cook for a few minutes until the mixture has also turned darker in color (like lightly caramelized onions). Then add the curry powder and ground cumin, and cook until fragrant. Add the chicken (or beef) stock, whole milk and Japanese curry cubes. Simmer and stir constantly until the cubes have completely melted, the liquid has thickend and the volume has reduced just slightly. Melt the bittersweet chocolate into the sauce at the end. Or if your curry cubes are already on the sweeter-side, see note *, use unsweetened coco powder instead (whisk 2 tsp of coco powder with 2 tsp of water until smooth, then whisk into the sauce).

Let the sauce sit for at least a few hours if you can, or better yet overnight, to deepen in flavour. Curry is always better the next day.

To bake: Preheat the oven on 400ºF/200ºC. Mix Japanese panko breadcrumbs evenly with 4 tbsp of peanut oil, 1/2 tsp of salt and 1/4 tsp of freshly ground black pepper on a baking sheet. Bake in the oven for 15 min, stirring every few minutes, until the panko are golden browned. Let cool completely, then crush 2 handfuls of baked panko with your hands (smaller crumbs adhere better to the patties). Set aside until needed.

Mix the ground beef evenly with very finely diced onion, worcestershire sauce, sea salt and black pepper (do this right before cooking or the meat and onion will emit water). Divide into 4 equal portions (or 3 portions for giant katsu like I did) and shape into thick patties. Set up a breading-station with seasoned flour, beaten eggs and pre-baked panko. Coat the patty with flour on all sides, then with beaten eggs, then into the baked panko. Gently pat the panko to adhere to the patty, then dip the 2 flat sides again into beaten eggs and more panko to create a thicker crust. Set aside on a baking rack and repeat with the rest of the patties.

Lay a sheet of foil on the bottom of a preheated 375ºF/190ºC oven, then place the baking rack directly into the oven without a baking sheet (to expose the bottom of patties to more heat). Bake for 25 to 30 minutes, depending on the size and thickness of the patties, until cooked.

To fry: Fresh or dried/store-bought panko both work for frying. To make fresh panko, lay sliced soft white bread (preferably from Asian bakeries) on a surface uncovered for a few hours or overnight to dry. Trim the edges off then torn into small pieces. Run in a food-processor until cut into breadcrumb-consistency.

Form and bread the patties as instructed above, using fresh/dried panko instead of pre-baked.

Add enough vegetable oil to a frying-pot until it reaches 2″ deep, and heat over medium-high heat. The oil is ready when a wooden chopstick is inserted into the center of the oil, small bubbles form quickly on the edges. Fry the breaded patty, one at a time, until golden browned and crispy on all sides and the center is cooked.

If your sesame seeds are un-toasted, combine white/black sesames in a skillet and set over medium heat. Stir constantly when the white sesames turn lightly browned and start to pop (which would mean that the black sesames are ready, too). Let cool completely, then transfer the sesames to a stone-mortar or spice-grinder, pound/pulse until coarsely ground (careful not to turn it into paste!). Set aside. Whisk sesame paste, light soy sauce, mayonnaise, rice vinegar, toasted sesame oil, sugar and grated ginger together until even. Add 1 ~ 2 tbsp of water to loosen (depending on the thickness of sesame paste), then add 1 tbsp of ground black/white sesames and mix evenly.

Remove the core from the cabbage, then with a mandolin-slicer or truffle-shaver (yes that’s what I used), shave the cabbage into super paper-thin shreds.

Warm up the curry sauce over medium-low heat before serving (adding a bit more milk if too thick). Place the menchi katsu / hamburger croquette over a hot bed of steamed Japanese rice, then ladle a generous amount of curry sauce over the top. Sprinkle with toasted ground black/white sesames, and serve with shredded cabbage w/ sesame dressing and Japanese pickles. 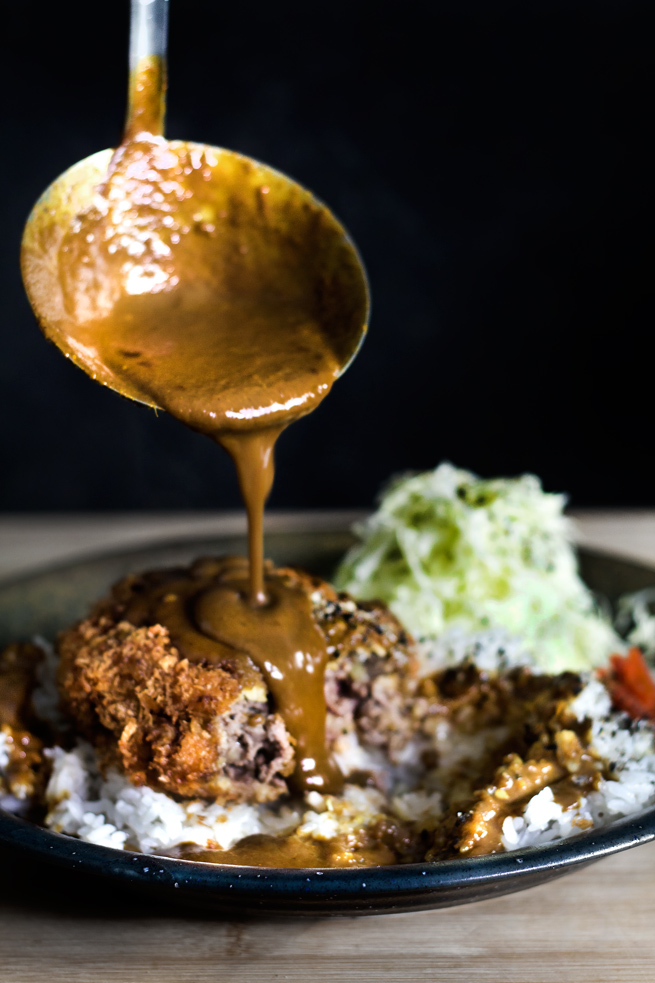